Hi there! It's Mandi here, from Making Nice in the Midwest. I've been really inspired by the cement projects bloggers have been creating recently, haven't you? Amanda at Wit & Whistle made this really cool two-toned concrete letter that would be great in a bookshelf display, and I really love the idea of concrete candle holders like these lace textured ones from Liz of Say Yes to Hoboken. I decided to marry the two ideas (Since, you know, 'tis the season for romance.) by making concrete letter candlestick holders! Of course, the letters I used are X and O, because they embody the perfect mooshy gooshy sentiments I'm aiming for at my Valentine's table for two. If you're hosting a larger Valentine soiree, or are looking for centerpieces for a banquet table, you could make a few of these to go down the center of a long table, and arrange flowers around them. A perfectly dramatic centerpiece for a wedding or party, and relatively inexpensive to make.

I have to say, though, this project was not as easy as I initially had expected it to be. I ended up making five (YES- FIVE) sets of these letters before I finally found a method that worked properly. Yikes! This project doesn't have to involve as many fails, though, because you can learn from my mistakes! So- if you do this project, it doesn't have to be difficult. Just pay attention to all of my notes at the end. Okay? Okay! Here we go! 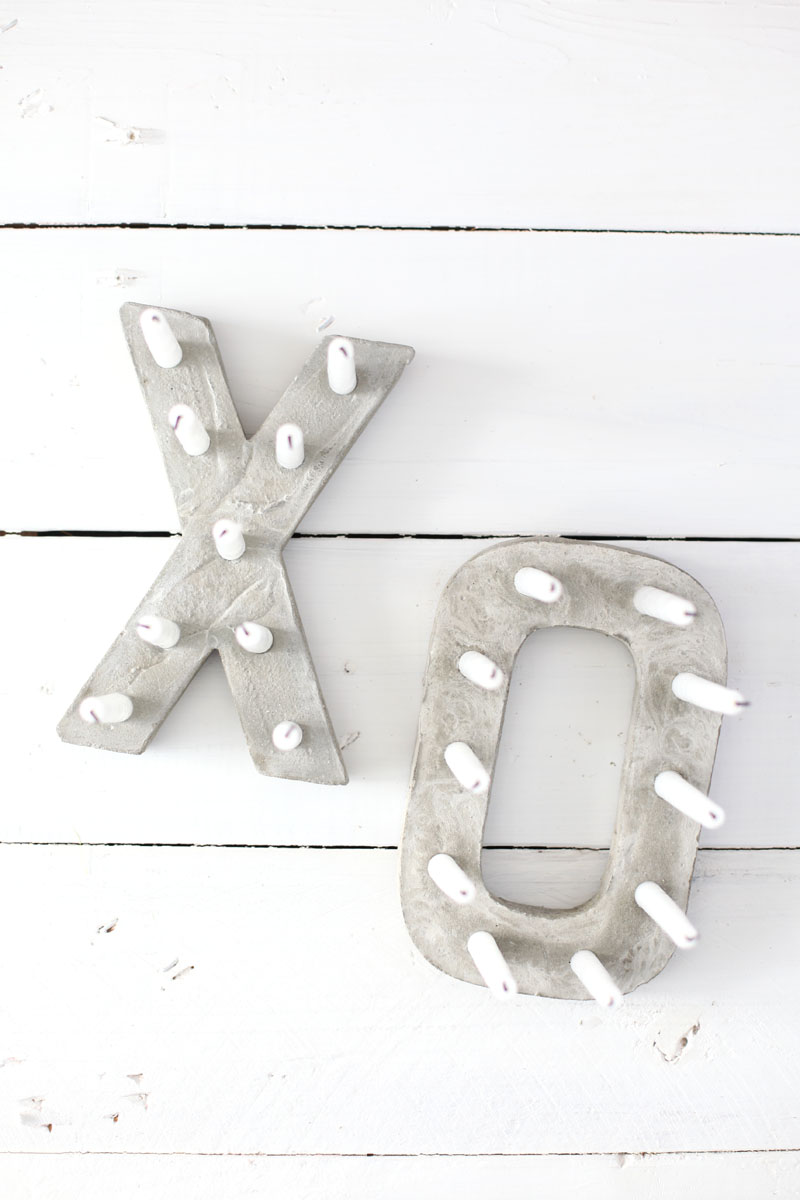 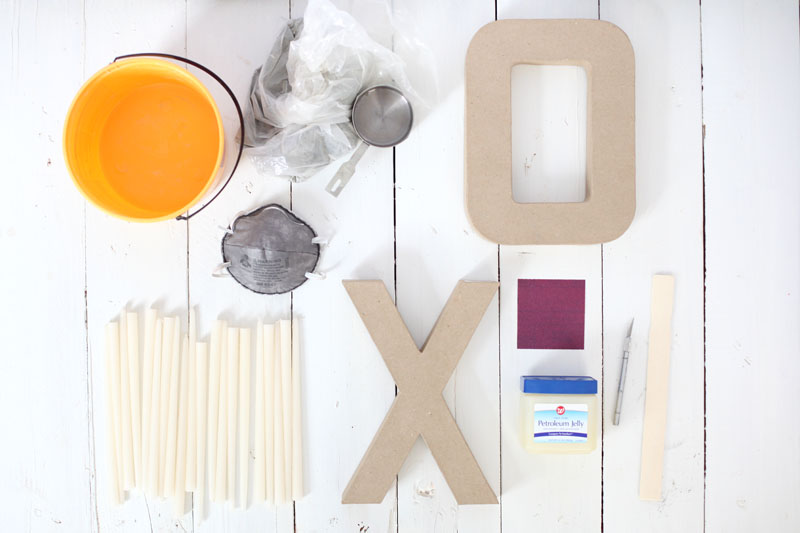 Some things you should note before working with concrete: 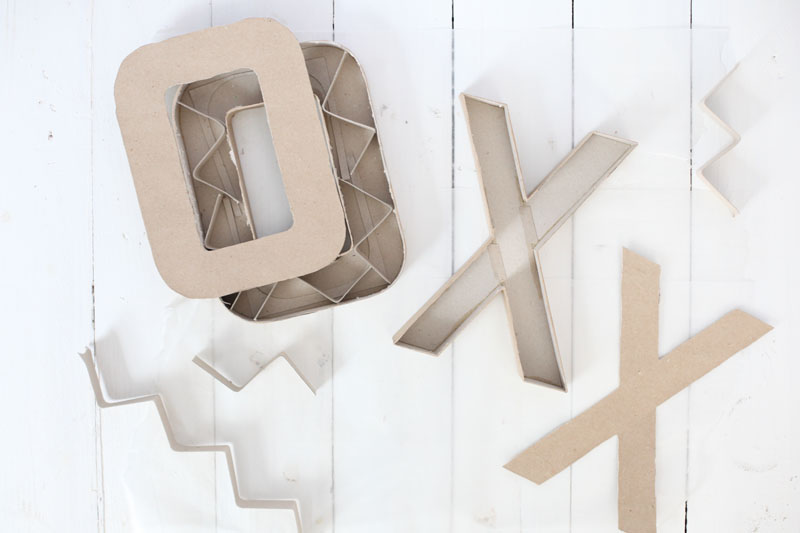 Step One: Use a sharp craft blade to carefully cut away the face of the cardboard letters. Always cut away from your body, lest the knife slip and get ya!

Step Two: Coat the inside of the cardboard letters with petroleum jelly- all the way and around the inside edges and even around the tops of the sides just to be safe. I found an easy technique was to get the corners really goopy first, and then smooth out the goopiness around the bottom and sides. I used my hands for this and then washed them with dish soap to get off all of the petroleum jelly. 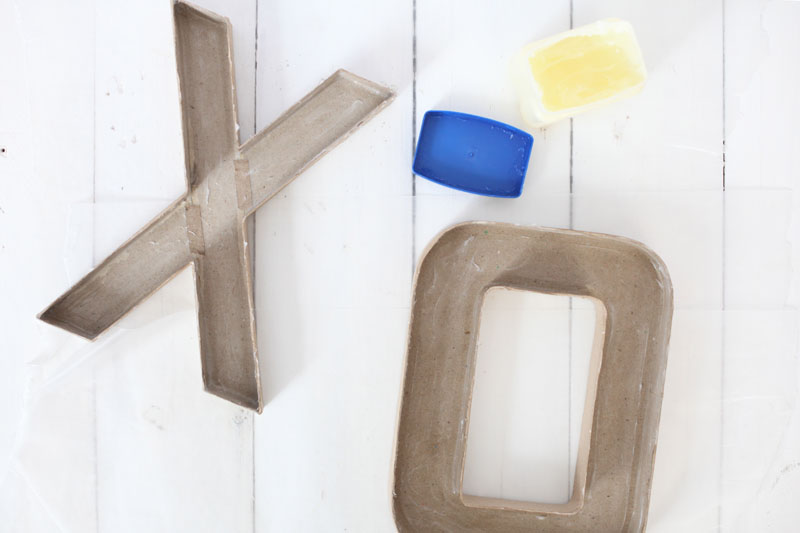 Step Three: Use half cement and half concrete mix, combining the dry mix with water and acrylic binding inside of a bucket. Be sure to wear a safety mask so you don't inhale the dust, and stir quickly, because you need to finish the next couple of steps within five minurtes. Follow the directions on the bottle for how much acrylic binding to use, and use the exact amount that the concrete and cement packaging calls for. It will have a thick consistency- thick enough to scoop, but not so thick that it won't drip during from your tools when you first mix it. If it's too watery, it will compromise the chemical ratio that causes the concrete to set up. If you are making more than two letters, only mix enough concrete for two letters at a time, so you don't waste any concrete due to it setting up before you can use it.

Step Four: Working quickly, use the paint stirrer to scoop the concrete into the letters. You can also use a metal spoon, but the little rocks in the concrete might scratch it up, so don't use a fancy serving spoon that you want to look gorgeous forever and always. Fill the letter about halfway full, and set it down onto your work surface, gently banging the bottom onto the surface a few times to get the concrete to settle down. Then fill the concrete to be a little less than all the way full, tapping it again on the work surface. At this point, you need to make sure that the top portion is completely smooth, and that the little rocks in the concrete mix have all settled down to the bottom. You will not be able to sand down the top of the letter once finished, so keep tapping until the top is perfectly level and smooth. 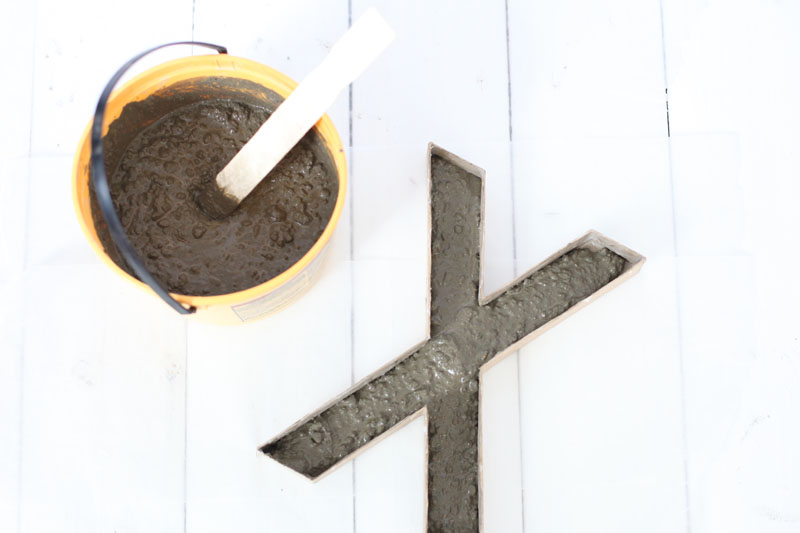 Step Five: After the settled concrete mix has been in the letters for only about two minutes (This time had probably passed as you were filling the second letter, so you must work quickly- this is why I didn't take pictures of this part.), push the candles into the wet concrete, arranging them to be an equal distance. You might need to wiggle them in between little rocks, and you may need to hold a candle for a second to make sure it's straight- but it's important that they are positioned as straight as possible, because you will not be able to move them again. It's best to figure out where your candles will be positioned before you pour the cement/concrete mix, so you don't have to rearrange them after putting them in. If you simply must rearrange the candles after inserting them, you'll have to work really quickly. Pull the candles out, tap the letter again to get the concrete to settle down to become perfectly level again at its surface. Then insert the candles quickly. If the cement begins to set up, forcing the candles in will compromise the stability of the concrete and cracks will form that will end up breaking the letter when you try to remove it from the mold later.

Don't forget to immediately clean your supplies by scooping any excess cement mix into a disposable container, and rinsing out the remainder with plenty of water. 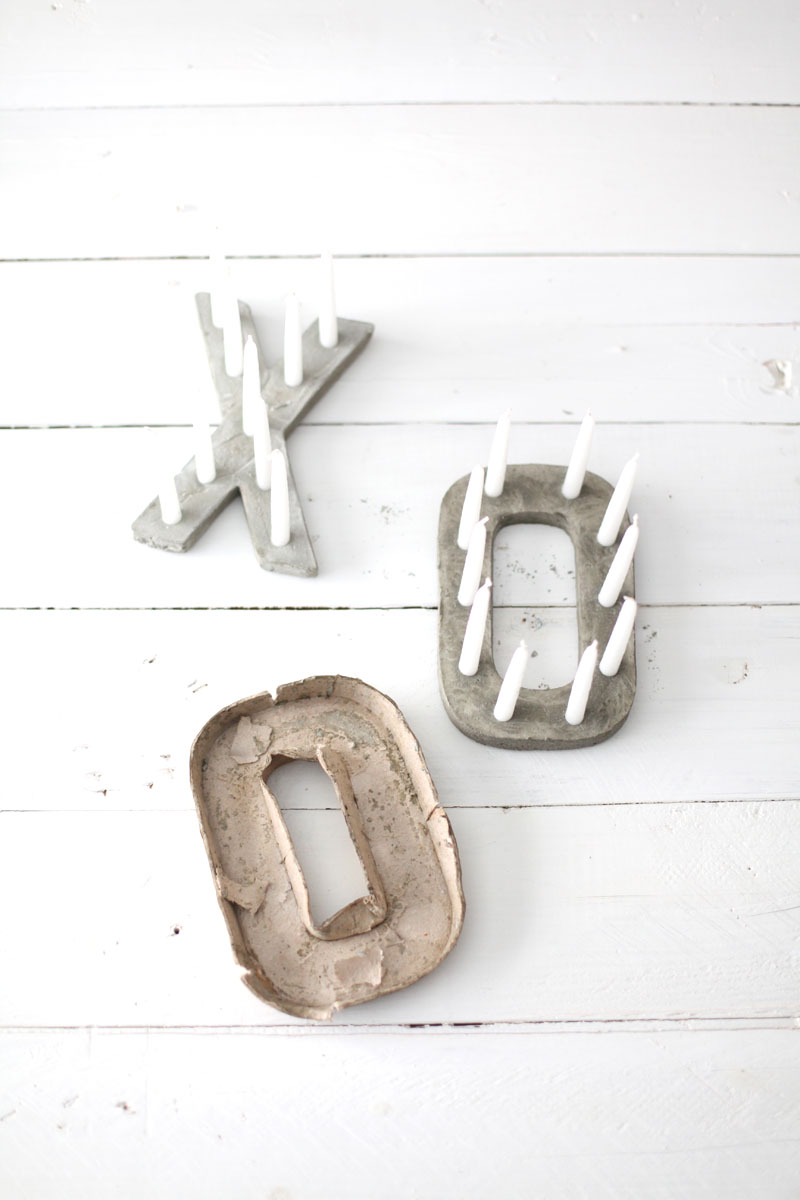 Step Six: Let the concrete set up for at least 24 hours, then remove the concrete letter from the cardboard forms. If you are careful, you can reuse the forms a couple more times after they've dried out. The photo above shows an O letter form that I had used three times, and finally got aggressive on the third time removing the concrete letter.

The sides and bottoms of your concrete letters will be goopy from the petroleum jelly, so you will need to gently clean this off using dish soap and a washcloth. Make sure you remove all of the jelly. If there are any corners that are sticking up because of uneven pouring of the concrete, gently sand away at it so the concrete is even. If you have enough cement in the concrete mixture, this shouldn't be too much of a problem, but if any of the pebbles from the concrete mixture are still near the top or corners of your letter, then you will end up with a rough finish. So it's better to not sand if you don't have to. The concrete will lighten as it dried. In the photo above, the X letter on the left had dried a day longer than the O on the right. The cement does not need to be sealed, unless you want to, of course, but it may be difficult to do with the candles inside the cement. 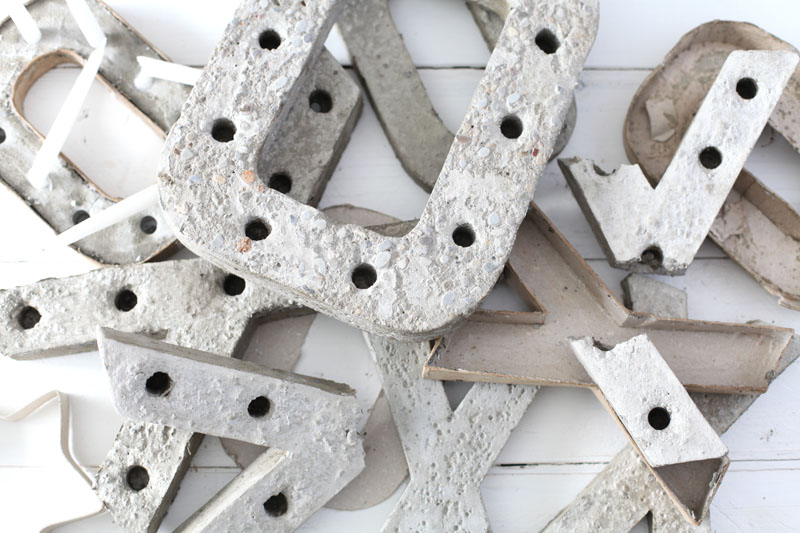 Beware of making these Mistakes!

I mentioned before that I actually had quite a frustrating experience figuring out how to make these little guys. So if you want to avoid similar frustrations, take heed of the following horror stories. I'll just give you the rundown of errors in order of how they occurred.

First Attempt: When I began the project, I had planned on being able to remove the candles from the first set of letters I made, so I applied petroleum jelly to the bottom of the candlesticks and then removed them after the cement had set up for about 12 hours. I did not use concrete in the forms, but just stuck with cement mix because I wanted a sleeker, smoother finish that concrete just can't give you because of the stones in the aggregate. Wiggling out the candlesticks from the cement compromised the stability of the cement, though, and I ended up with several hairline cracks that ended up shattering the letters when I removed them from the cardboard molds.

Second Attempt: The next time I decided not to try to remove the candles, but instead to just leave them in the molds. I didn't remove the candles, and I didn't even dare breath around the cement letters until they had set up for 24 hours. But when I went to remove the cement letters from the molds, they broke again! I noticed the center of the x was particularly vulnerable. So I thought maybe I had better try using concrete instead of cement after all, since the pebbles in the concrete aggregate would make the final product stronger.

Third Attempt: I repeated the entire process- using a mixture of only concrete, instead of cement, and then I inserted the candles, leaving them there for 24 hours. You can imagine my frustration the next day when the X was once again broken at the middle. I figured I hadn't been making the letters thick enough (I had only been filling the molds about 3/4 of the way full with the concrete mixture), and I had also been pushing the candles down too far, making the area around them really weak.

Fourth Attempt: The next time I used concrete poured all the way to the top of the molds, and didn't push the candlesticks in so far. Finally the letters came out strong and didn't break apart! But I was really unhappy that the concrete had left a really rough finish, not at all sleek and modern as I had expected. I had expected to be able to sand this out, but sanding just left a rougher and rockier finish.

Fifth Attempt: So I gave it one last try- this time deciding I would try a 50/50 mix of pebbly concrete and sleek cement, but add in an acrylic binder to give the final product extra stability. I really gave the molds a good tapping after they were filled, so that the surface could become perfectly smooth and level after. I filled the molds all the way to the top before tapping them vigorously onto the table, and then I only pushed the candles in about half way so as not to destroy the integrity of the concrete around where the candles were inserted. After the concrete letters came out of the molds, I didn't even sand down the edges, because I knew the rough concrete looked pretty bad after I tried sanding it previously. But here they are! In one piece and looking mighty fine, if I do say so myself. 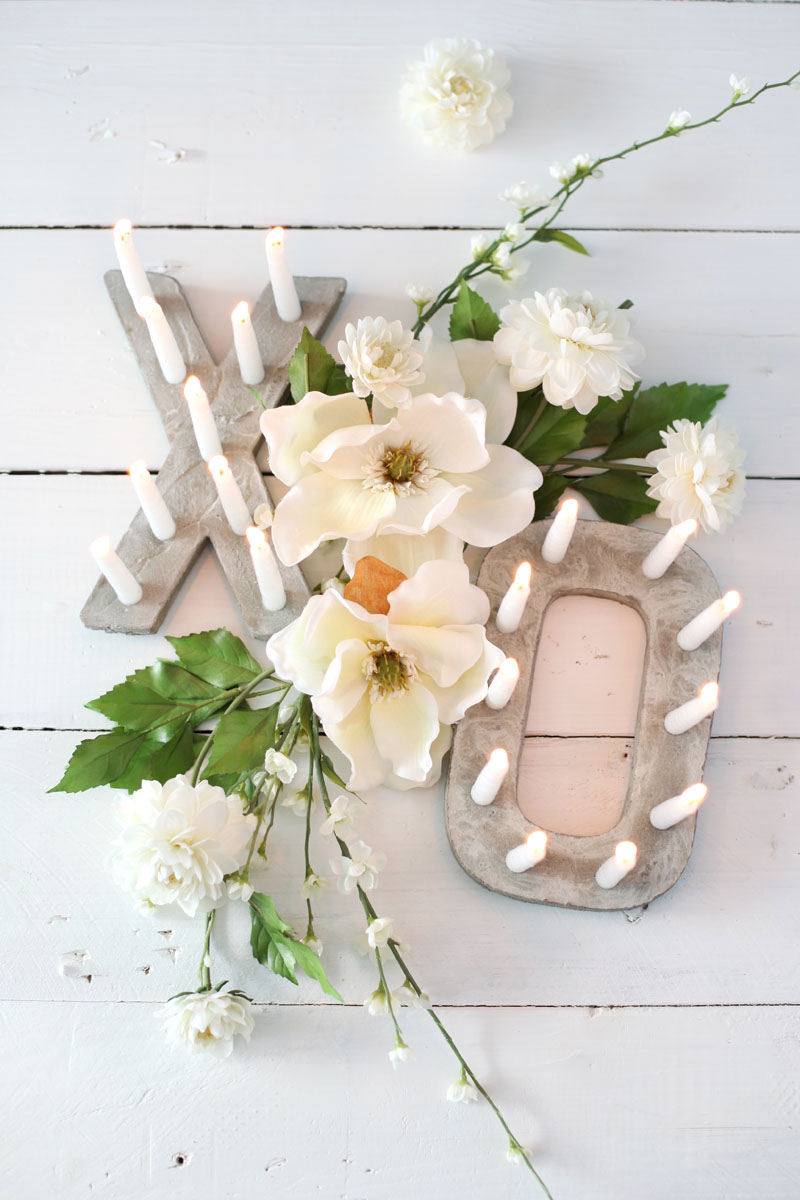 This project sure was a learning experience, and after all of those fails, I feel like I'm quite the expert at working with cement and concrete mold projects. Hopefully my mistakes saved you lots of angst, and hopefully you won't be so intimidated at starting a similar project, because you'll know what not to do! These concrete candlestick letters really are easy to make if you follow my tips, and you can even reuse the cardboard forms a couple of times to make lots of XO letters to use as decor in your home. I hope you give it a go!