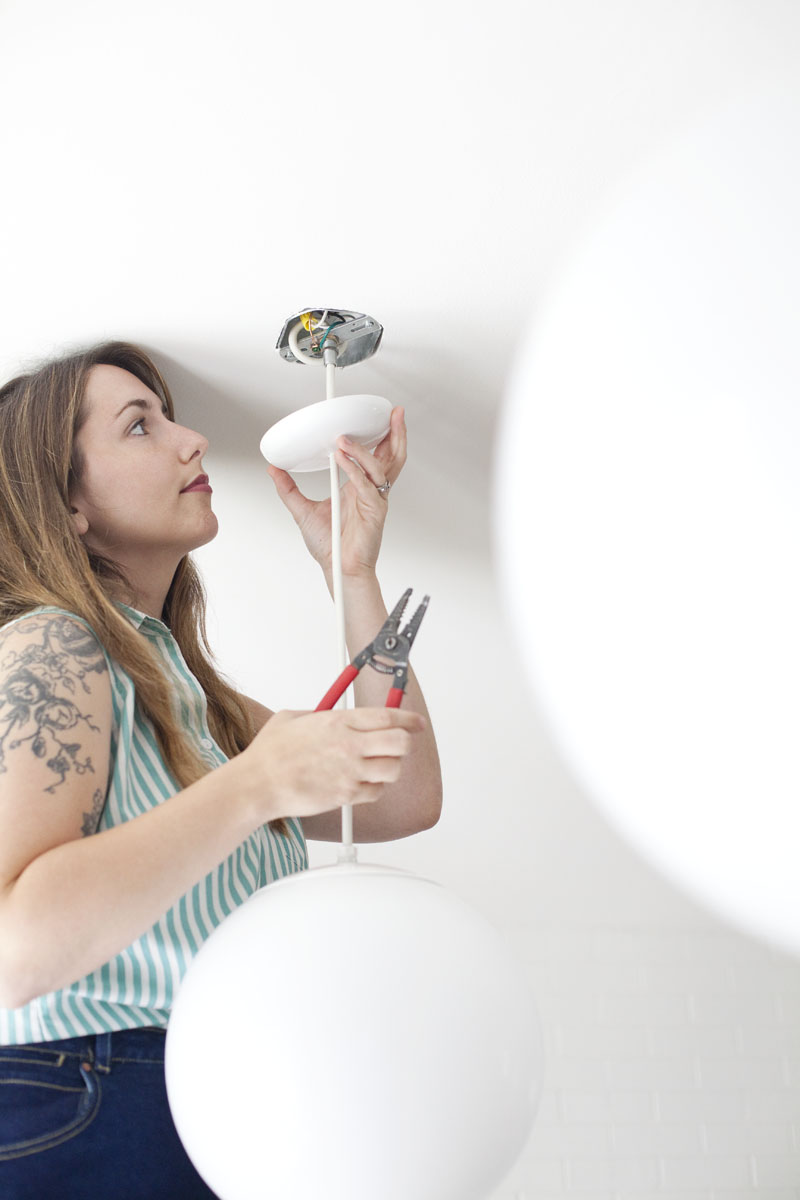 The simplest act of switching out a light fixture can dramatically change the atmosphere of a room. But if you don’t know how to hardwire a light, it’s not such a simple act, is it? I’ve spent all of my adult life calling my dad whenever I’ve wanted a light fixture changed. It’s gotten to the point that I could never move away, or I would be doomed to live with ugly lights for the rest of my days. Or else call an electrician, I guess. But why would I do that when I’m perfectly capable of learning how to hardwire a light myself?

I had three lights that needed changed during our recent renovations, and instead of calling Dad to hardwire them for me, I asked him if he could walk me through the process. You guys, it’s so easy— I don’t know why I thought it was so scary! It’s a good skill to keep in your mental tool box (aka brain), so read on to find out how simple it is to hardwire a light without calling an electrician. 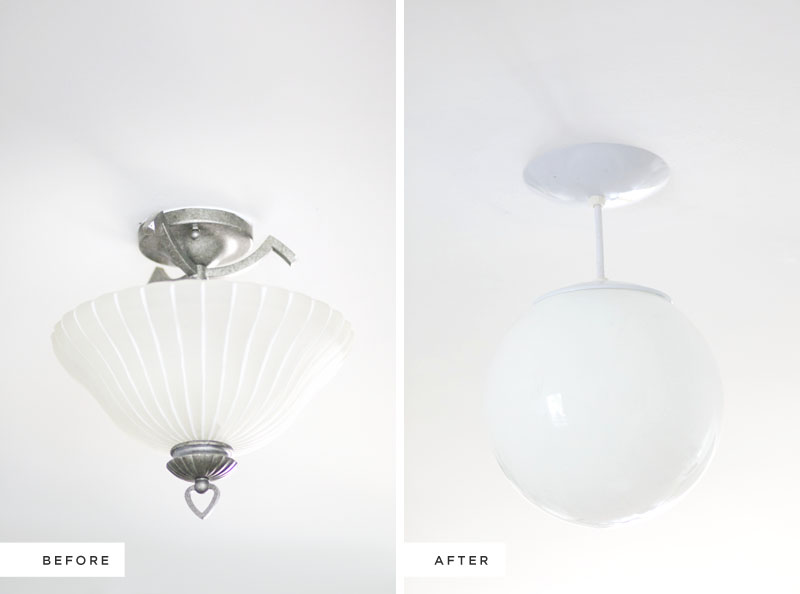 When we first moved into our house, I thought I’d probably replace our kitchen light right away with the light from our old bedroom at my brother’s house, but I never got around to it. Pretty soon, the kitchen light became invisible to me. I never really noticed it until we began renovating our kitchen, when it suddenly stood out against all of the changes we were making. So as things were wrapping up with our renovation, we swapped out the light that came with the house for the light from my old bedroom. 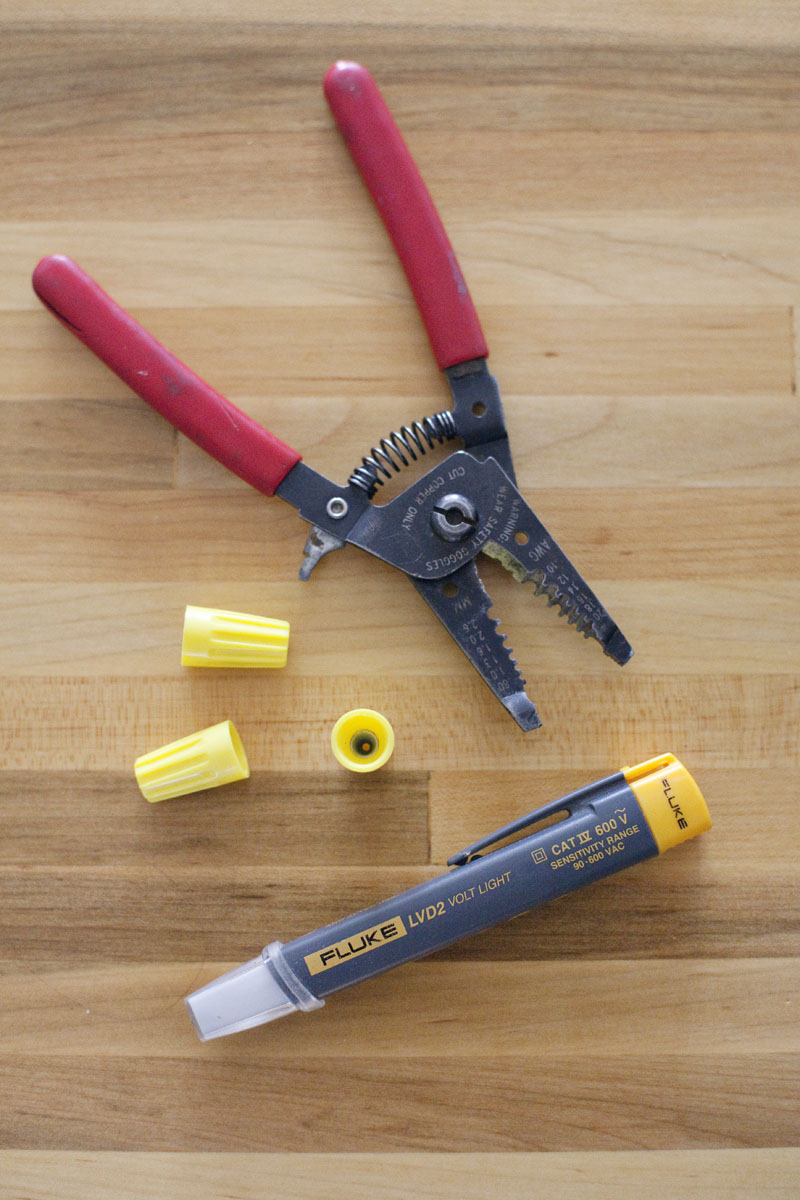 Supplies:
-wire stripper
-wire nuts*
-optional: voltage detector
-screw driver (You may need both a flat head and a Phillips head depending on the hardware for your light.)

Wire nuts are for finishing the connection of wires from the light to the wires coming out of the electrical box in the ceiling. You can select the type of nut for your project by looking at the box of nuts and seeing what wire groupings they’re rated for. These yellow nuts are rated for 1-3 12 gauge wires, or 600 volts maximum. You are probably only going to be joining two 12 gauge or two 14 gauge wires with the nuts.

Older homes often use 20 amp circuits, which may be wired with 14 gauge wires. This is a fire hazard and will not pass inspection. Rather than upgrading all of the wiring on that circuit to 12 gauge, you can just downgrade the circuit to 15 amps to meet code standards. 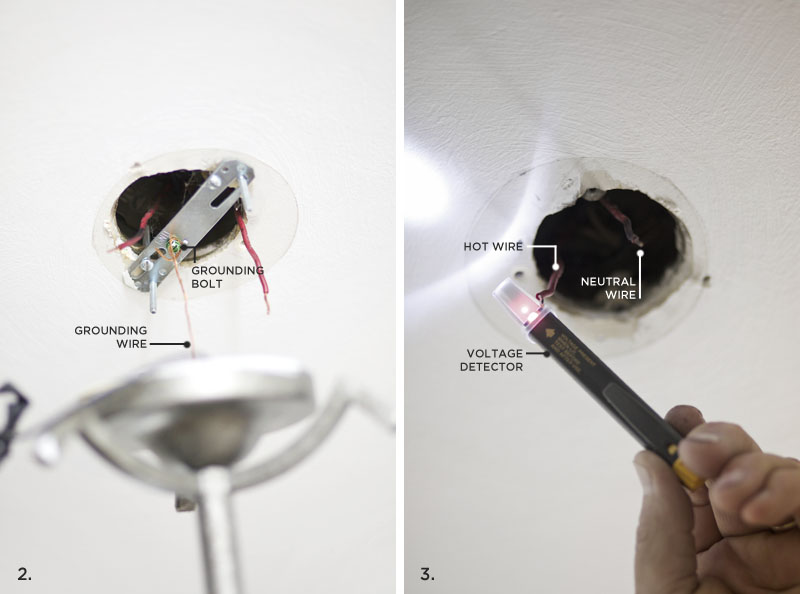 Step One: Turn off the breaker for the circuit housing your light. To make sure you have the right circuit, turn on the light. Flip the switch on the breaker box, and if the light turns off, you’re good to go. This would be a good time to label the breaker if you haven’t yet so you don’t have to guess in the future.

Step Three: Determine which of the two wires is the hot wire. This is the one that will shock you if it’s live. Usually black wires are hot wires while white ones are neutral, but my house just had red wires. We flipped the breaker back on and used a voltage detector to determine which wire was hot (it lights up red around the hot wire), then flipped off the breaker before continuing. 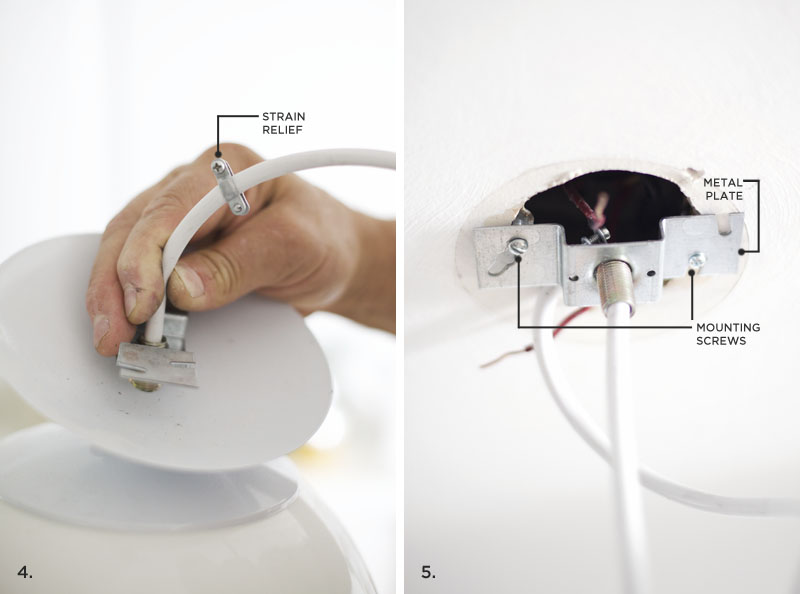 Step Four: Decide how much slack you want in your hanging chord if it’s a pendant light. This can be adjusted later. To set our chord length, we used a strain relief that was tightened by screws. Some lights just use a plastic piece that looks like an s-hook. 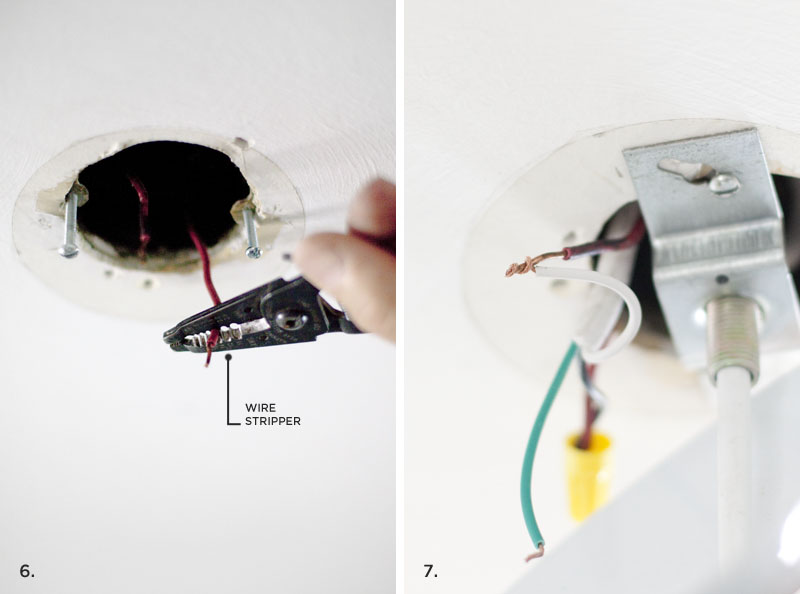 Step Six: This can be done at any point in the process. You’ll need to strip away the plastic sleeve of the wires to expose enough wire to twist together. Wire strippers have a series of holes in them for various gauges of wire which prevents the cutters from touching the copper part— you only want to cut away the plastic. 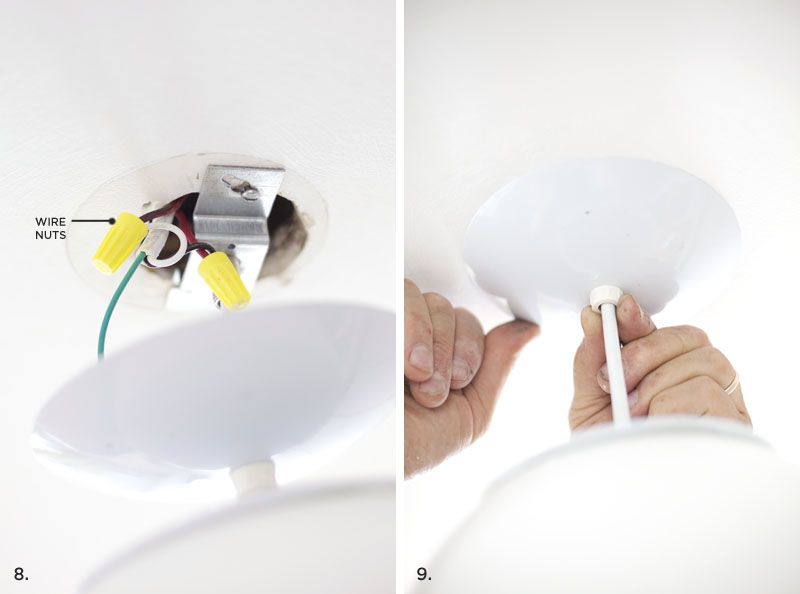 Step Eight: Twist wire nuts onto the wire connection. Then shove the wires and excess lamp chord back into the electrical box.

Step Nine: Twist the light fixture into the metal plate using whatever connectors are provided with your light fixture. Mine just twisted into place at the base of the chord. 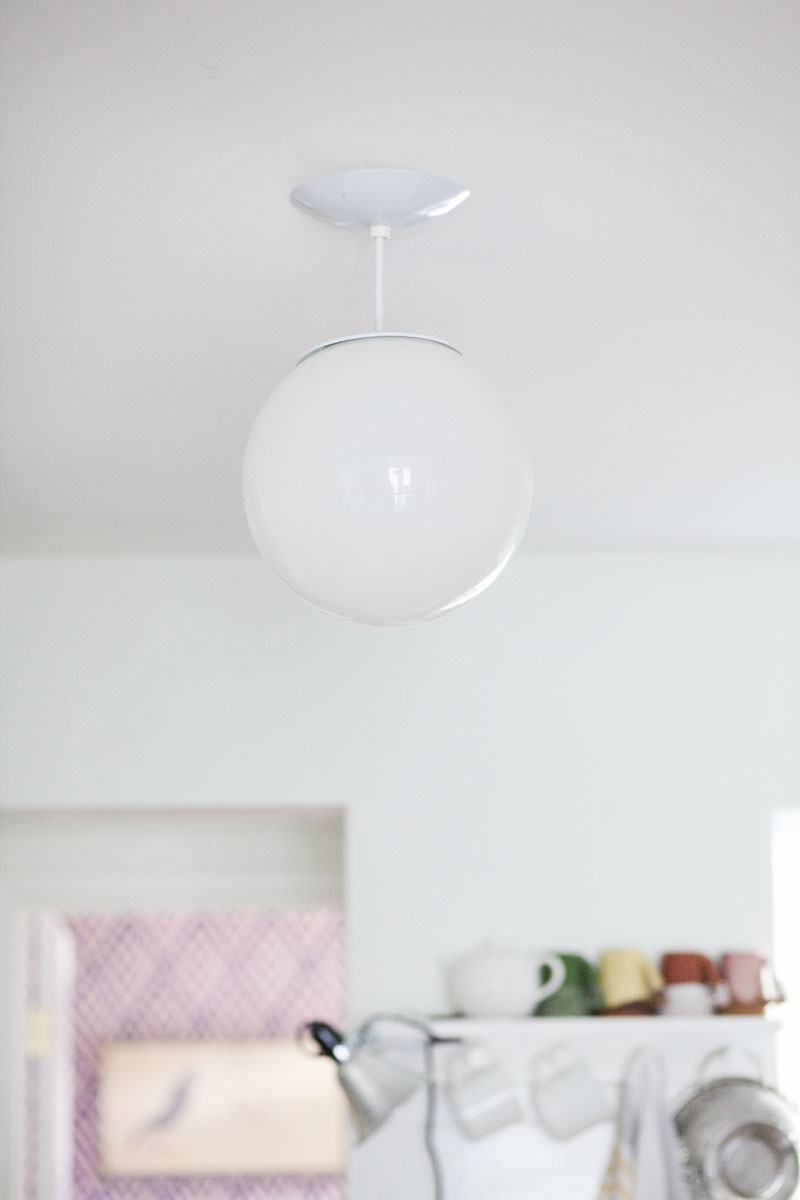 Wiring a light is a great skill for any DIYer to have, but if you’re uncomfortable doing this yourself, you should invite someone skilled to observe you the first time. I’ve had college level training on electrical wiring and building plans, but I was still too nervous to try it myself until recently. 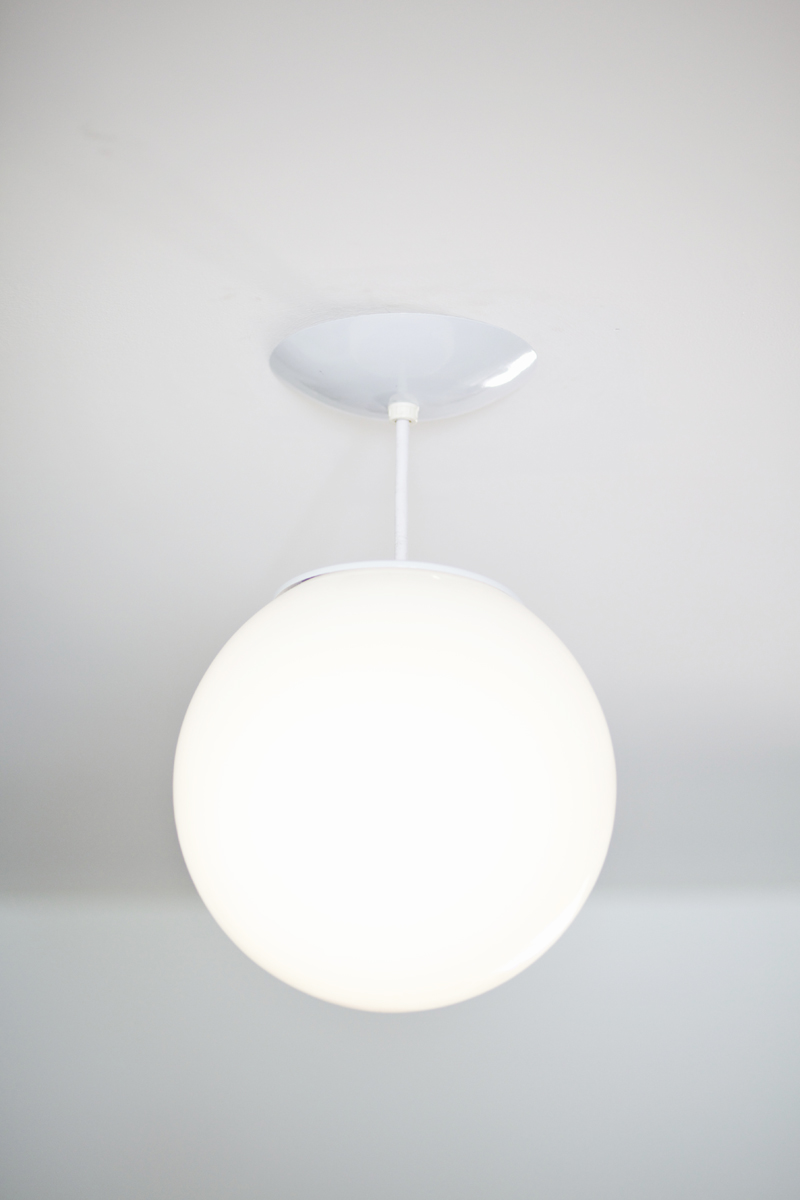 Working with electricity is a little intimidating if you’re inexperienced, but if you follow my safety tips and have a second set of eyes on your work, it’s not something to be afraid of. –Mandi