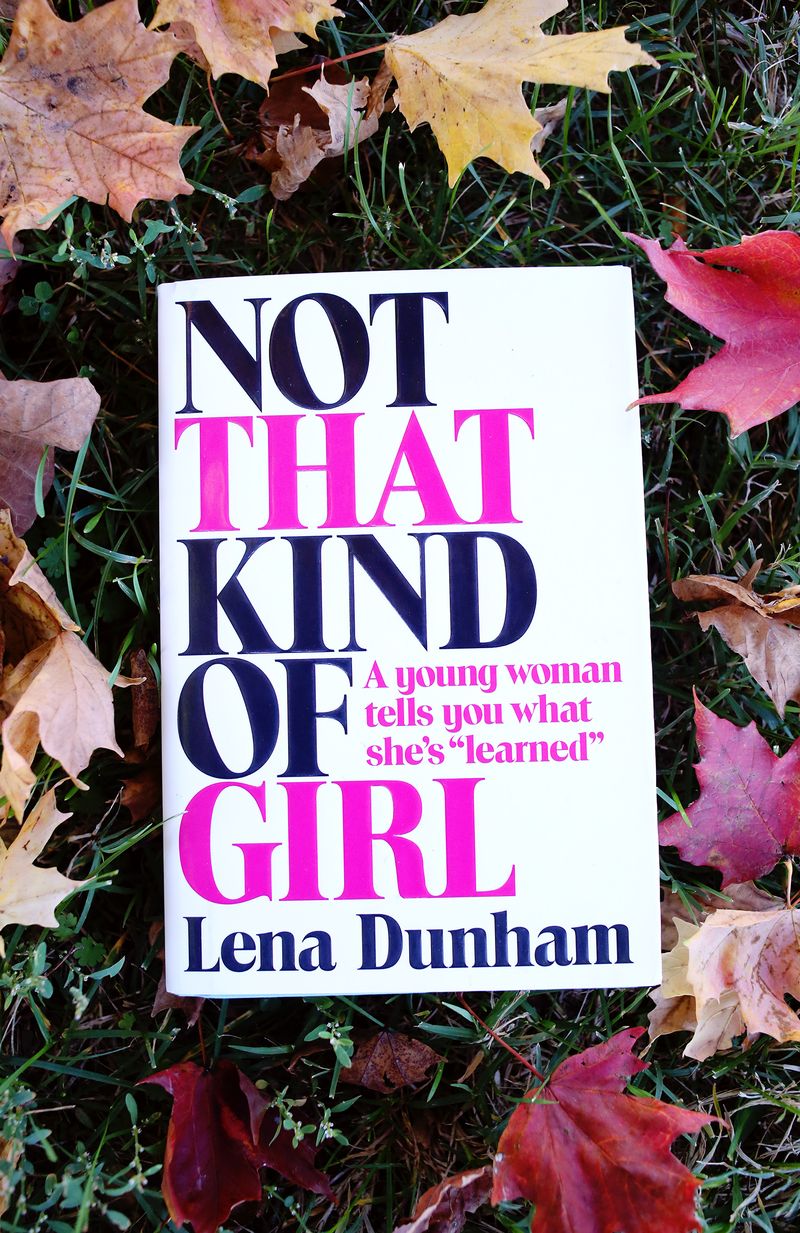 First off I have to confess, I've never seen Lena Dunham's show, Girls. I've had lots of friends recommend it to me, but I just haven't gotten around to watching it. To be honest, I sort of feel like I probably already watch enough TV. (Did that sound snobby? Guys, I love TV. I just mean that I probably watch too much already.) So, when I found out Dunham had a book coming out, and everyone kept saying it was a similar vibe to her show, I was stoked to check it out.

Typically at some point while reading a book, if I really like it, I'll flip to the back cover to read more about the author. I like to think of back cover author bios as an old school alternative to just googling an author. Anyway, Dunham and I are the same age. Cool. She has her own show, a best selling book, eight Emmy nominations, and has won two Golden Globes. So, whoa. She's sort of killing it. Go, Lena!

Of course the big thing that happened this month, concerning her book anyway, was all the controversy around some of the stories and comments she made about her and her sister's childhood. You can read more about that here, as well as Dunham's apology here.

I had already read most of the book before the controversy started lighting up the Internet. From my perspective, when I read those passages, here's what I thought: So, quite a few of my friends have children who are at an age where they are discovering certain things. And the stories they tell can range from cute to super awkward. Basically, their kids are discovering sexuality. They may note that their body is different from their opposite gender sibling at bath time. Or they may touch themselves inappropriately in public—they just don't know it's inappropriate yet. We aren't born knowing about sexuality, personal boundaries, or what is and is not OK to show or touch in public. These are things our parents (or other guardians) teach us as we grow up. Hopefully in a gentle, non-shaming way, as so often I think sex is shamed in our society. But that's a whole different discussion.

So when I read the more controversial passages about Dunham's behavior as a seven-year-old, yeah, they were a little weird to me, as I didn't really do anything like that growing up. But I still read it as just something awkward a child did before she really understood boundaries. When reading, I'd actually assumed this was going to be a setup for her mother (or father) teaching her about those boundaries, but that part didn't happen in the book. I'm not saying it never happened nor am I trying to turn this into a critique on Dunham's parents, as she acknowledges these are fictionalized accounts based on her memory. And we're going off the memory of a seven-year-old. Either way, I have to admit I was a little surprised by the controversy. I personally feel a little uncomfortable giving lifelong accusatory titles to someone for things they did when they were a child with a small understanding of boundaries. But I also don't have anything that could even be construed as childhood abuse in my background. If I did, perhaps I would've viewed this story differently. I don't know. What did you think when you read this passage?

Aside from that part of the book, I'd have to admit that overall I didn't really relate with Dunham's life very much. I think she's a talented writer and storyteller. She makes very interesting and poignant observations about her life experiences and those around her throughout the book. But, I ultimately just didn't relate to her life very much, so it wasn't as funny or affirming as it might have been if I did. It's strange because I think she covers a lot of areas that are pretty universal: relationships and sex, body image, finding a career path after school, and fearing death. I mean, we all think about these things, right? I do. So I really enjoyed being allowed into another person's life and perspective even if I didn't relate. But maybe you related to her life a lot, and you think I'm just talking crazy here?

I guess that's a good place to start the discussion. Here's a few things I'd love to know your thoughts on from the book:

1. The controversy. Please feel free to express your opinion, but also I don't think this is the only thing to comment on about this book. Just throwing that out there.

3. Body image and self-esteem in general.

4. Finding a career path or just direction you want to follow in life (it's SO hard, right?!)

Dunham touches on all of these things in her book, so I'd love to hear what you thought about her perspective and stories or any other thoughts you have about these topics. xo. Emma