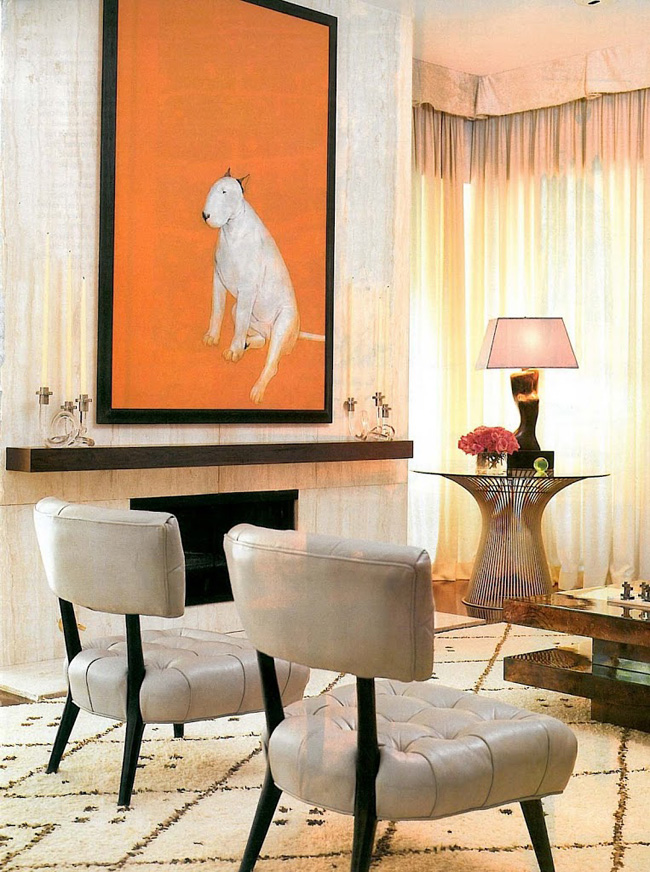 Hollywood Regency is known for its glamour, drama and new twist on old classics. The style became popular in the 1930s during the golden age of Hollywood. William Haines designed homes for movie stars that made them larger than life with sleek low-lying furnishings and sumptuously dressed walls and windows, while Dorothy Draper’s larger-than-life personality filled great halls and hotels with bright colors and big, bold patterns. Hollywood Regency gradually entered homes across America with the popularity of key elements, like tufted sofas and modern Greek and Egyptian influenced fretwork, patterns and furniture silhouettes. The style has been going strong since the 1930s and has evolved a bit with each decade that it endures. 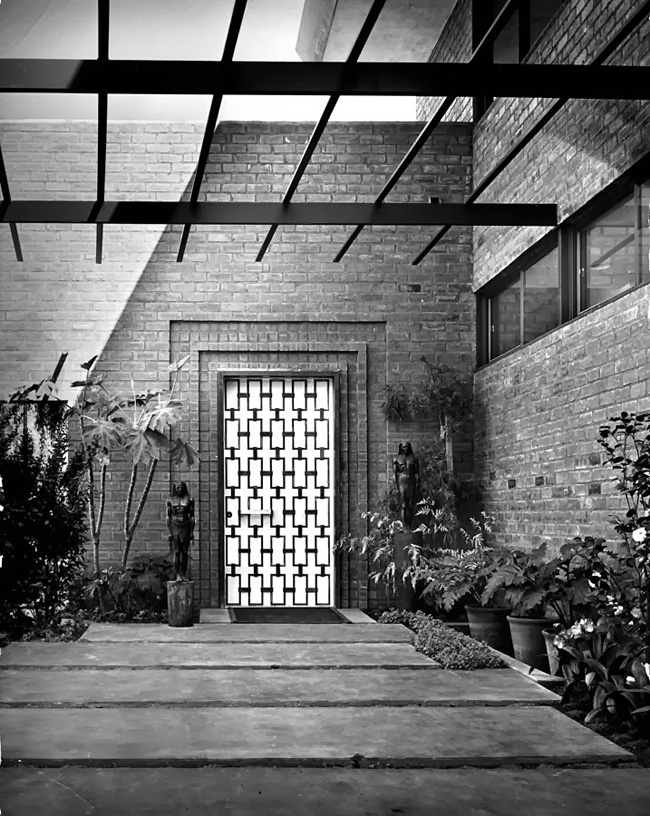 above: entrance to William Haines Interiors

Known as the father of Hollywood Regency, William Haines was first an actor who was eventually ousted from Hollywood because of his refusal to deny his homosexuality and enter into a sham marriage for the sake of the studios. His friendships with Hollywood starlets launched him to popularity as a decorator for the elite, eventually designing furniture that is still available to the trade today, like the beloved Brentwood chair that was inspired by the tapered, splayed legs of Grecian chairs. 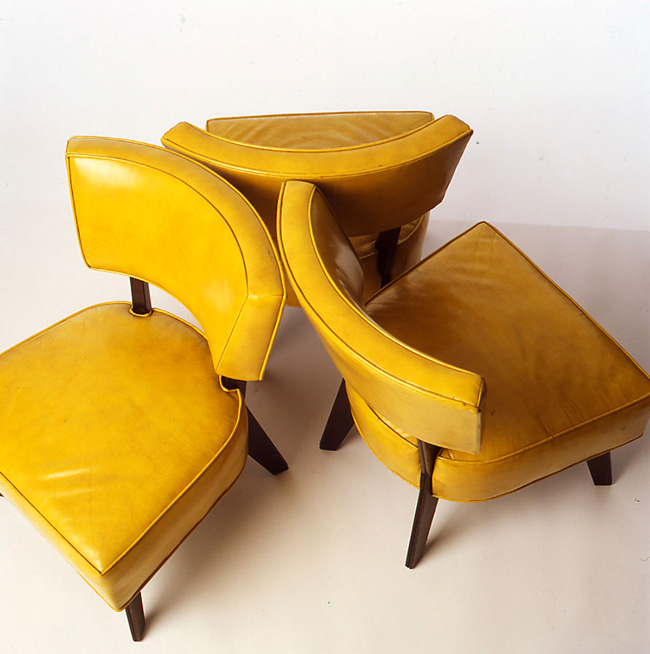 above: Pull Up chairs, a variation on the Brentwood chair, designed by William Haines 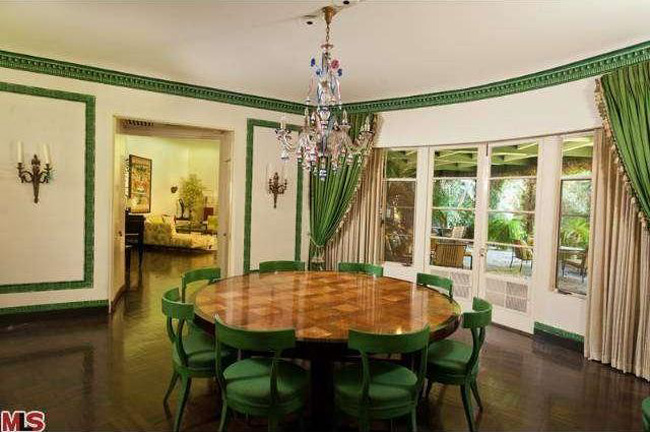 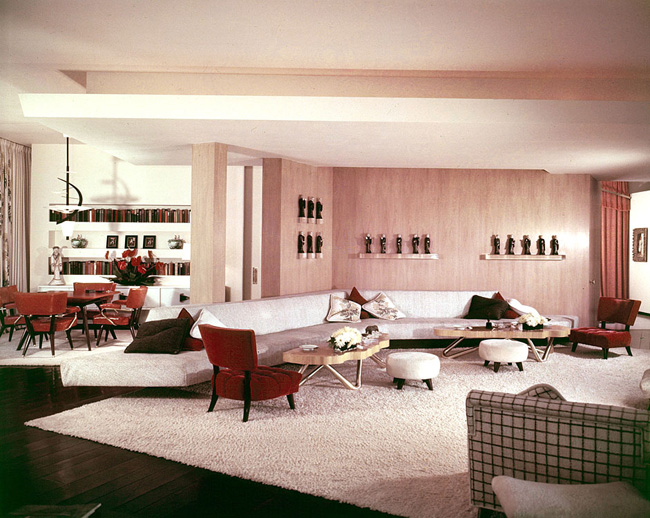 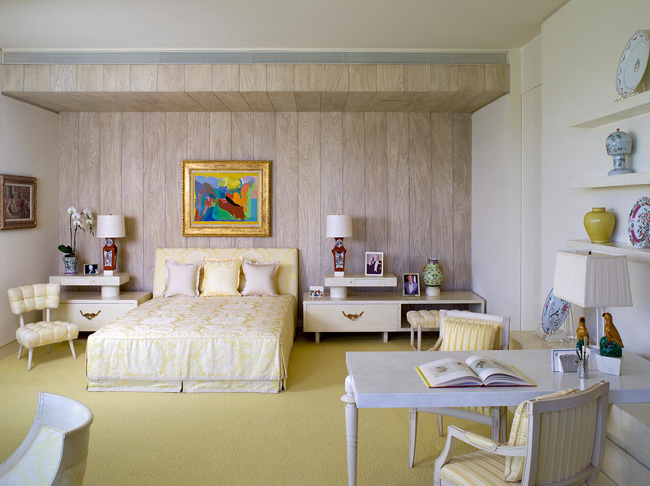 above: original master bedroom at Sunnylands designed by William Haines 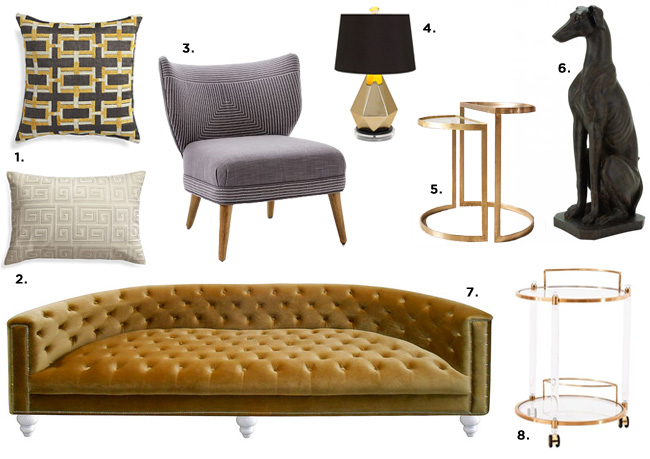 Add some Haines Hollywood glamour to your space with these modern pieces: 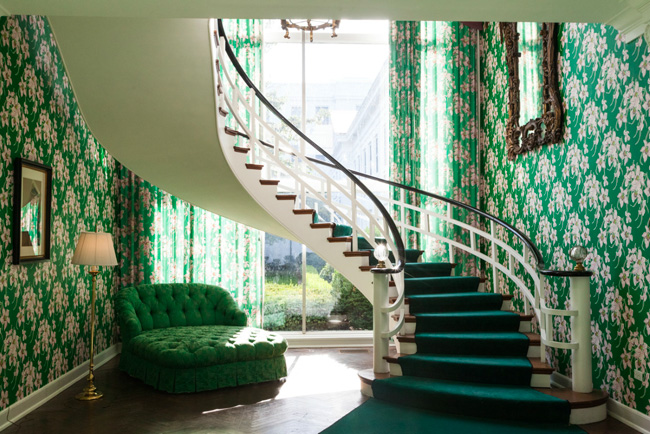 above: The Greenbrier Hotel designed by Dorothy Draper, photo by Gemma & Andrew Ingalls

Dorothy Draper, the mother of Hollywood Regency style, was a decade-defining decorator of the 1940s who freshened dark and tired period styles with fresh coats of white paint, black lacquer, and loads of oversized botanical prints and stripes. Her bold and often feminine color schemes modernized baroque and regency styles, softening and simplifying them to create a unique, Americanized version of traditional period style.

Draper’s Regency style was a bit more traditional, though perhaps bolder, than the sleek, glamorous styles of William Haines that became more mod as the decades passed. 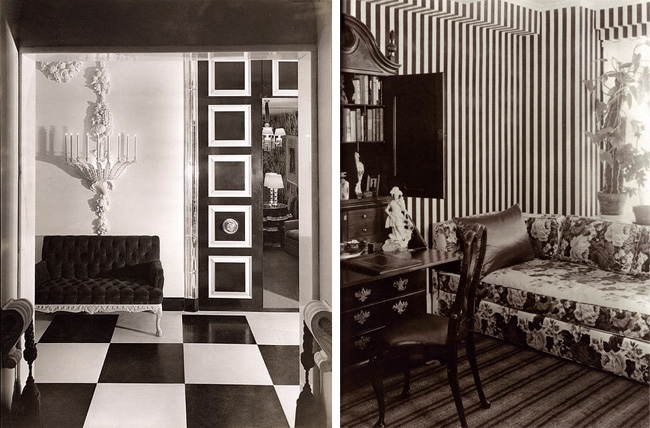 In Dorothy’s day, if you weren’t a modernist, a decorator’s goal was usually to perfectly copy period styles of bygone eras. Dorothy took a bold twist on traditional decorative elements, playing with contrast and scale. Ram’s head pediments were simplified in their form, enlarged, and given a fresh coat of bright white paint. Paneled doors were simplified with simple contrasting squares in black and white color schemes. Stripes, floral chintz and banana leaf prints were exaggerated to add a bold vibe to carpets and wallpaper.

The bold, quasi-traditional style of Dorothy Draper transformed the interior landscape of America, her influence injecting homes and public spaces with a fresh jolt of color. She also helped create the profession of interior designer and had a tremendously successful career in a day when ladies just didn’t work outside the home. Draper’s work was popular in high society and graced the halls and gathering rooms of the era’s popular hotels, clubs, and Manhattan row houses. She also wrote for Good Housekeeping, influencing other decorators and housewives all across the U.S. 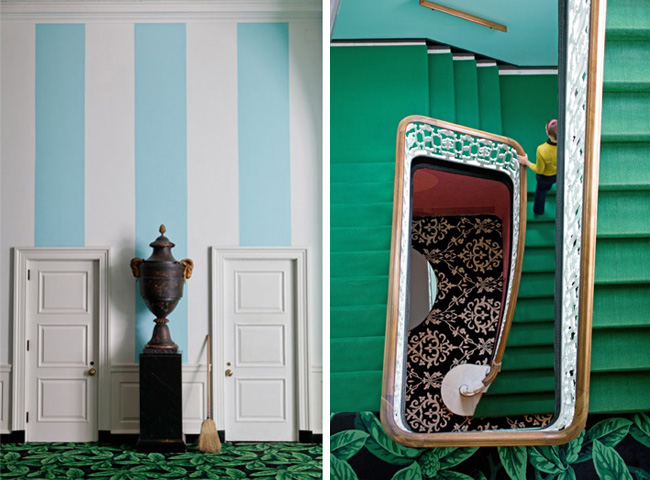 above: Greenbrier Hotel by Gemma & Andrew Ingalls / Victoria Magazine / below: Michel Arnaud for The Baltimore Sun 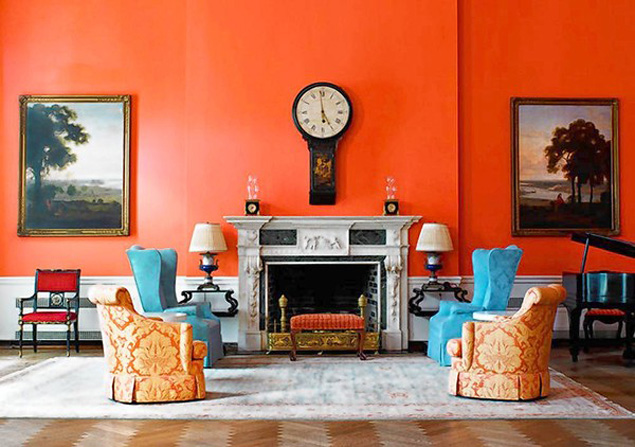 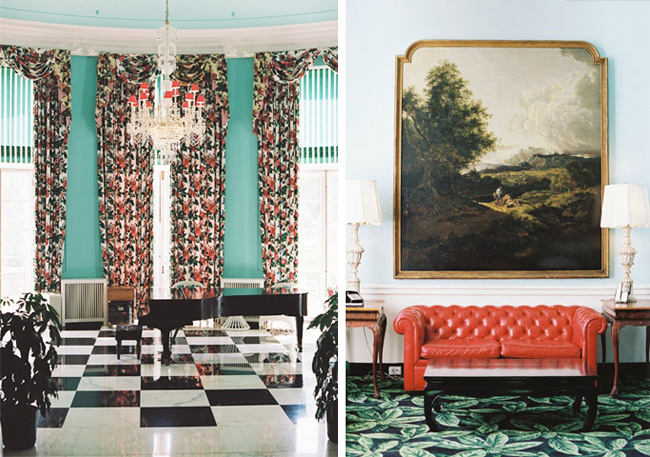 above: the Greenbrier Hotel by Cooper Carras for Matchbook Mag

Dorothy Draper’s work can still be seen gloriously displayed at West Virginia’s Greenbrier Hotel, as shown in the color images above. If you’d like to add some of her style to your home, check out this Dorothy Draper inspired collection of interior elements below: 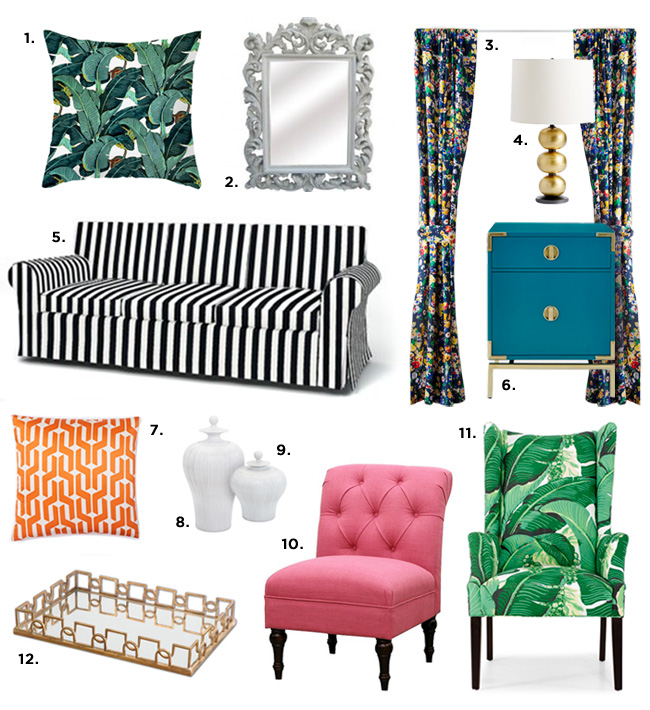 Hollywood Regency has become a far reaching style through the decades, donning many faces along the way. In the ’70s it blended well with mid century modern styles particularly in California, à la Palm Beach style. Check out Trina Turk’s dining room below to see an example of this, as well as the later work of William Haines. 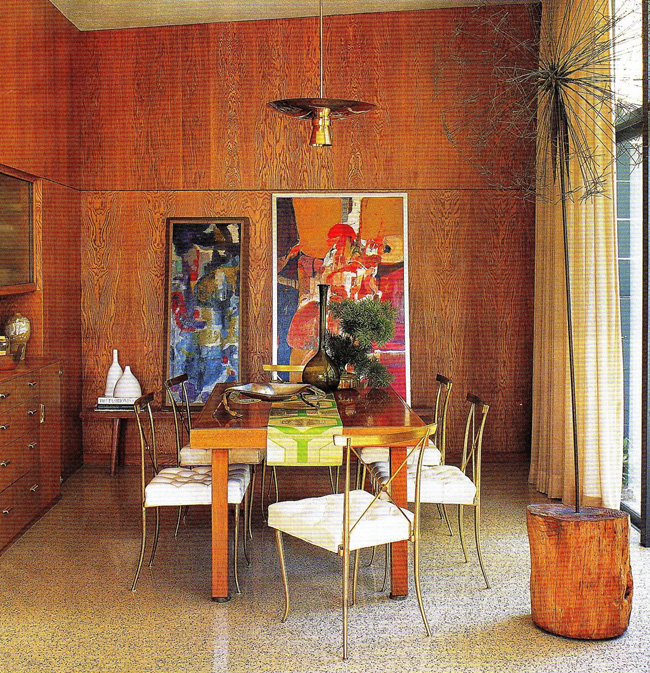 above: home of Trina Turk featuring William Haines chairs above: Ford home designed by Darren Brown in the ’70s 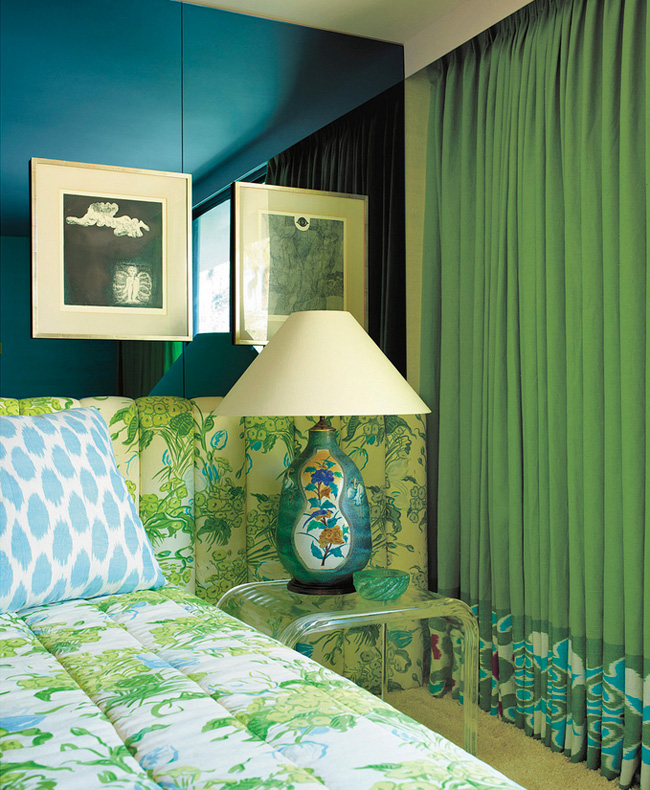 Homes from the 1970s are known for their heavy doses of pattern—to put it nicely! Pattern on the walls, patterns on the windows and patterns on the furniture. David Hicks was a British designer who masterfully blended the funky pattern-laden ’70s style with preppy tailored Hollywood Regency designs. 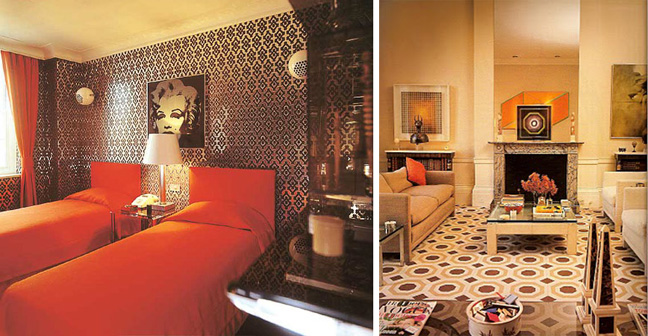 above: designs by David Hicks

Check out that carpet in the room above! Pretty bold. Hicks’ style is so iconic and really blends well with the aesthetics of stylish cult movies from the ’70s, like Harold and Maude and The Shining, movies most certainly influencing modern film makers like Wes Anderson (think The Darjeeling Limited) and David Lynch (Twin Peaks—think The Red Room). 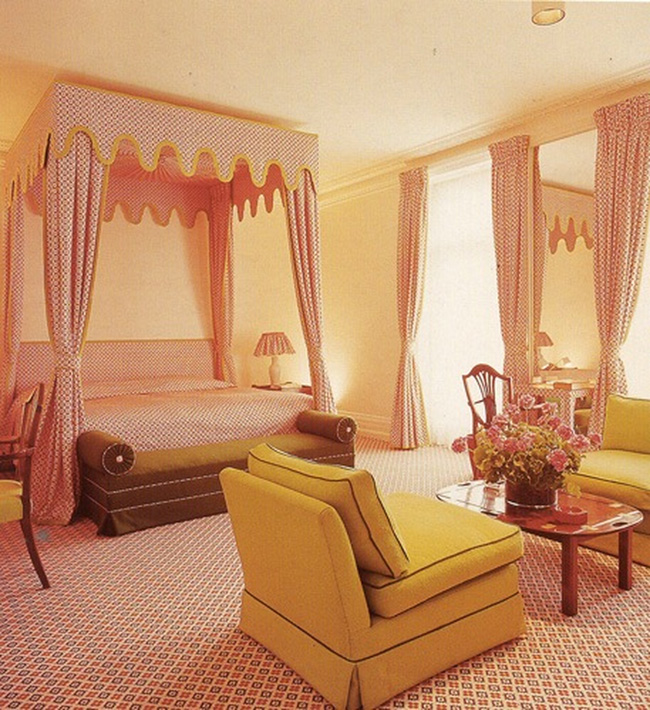 above: bedroom design by David Hicks in the ’70s

Designers are still infatuated with the drama and glamour of Hollywood Regency style. For modern interpretations, check out the spaces below. Popular modern designers who’ve put their own spin on classic Hollywood Regency designs include Jonathan Adler, Kelly Wearstler, Miles Redd, Nate Berkus, and many more. 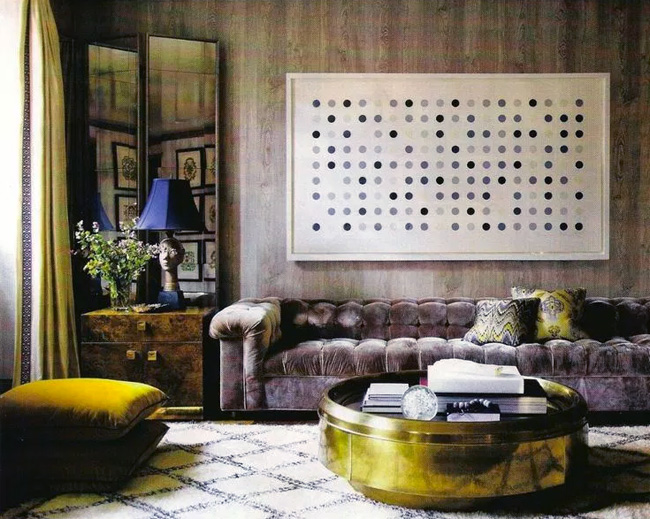 above: Elle Decor above: home of Marjorie Skouras via Apartment Therapy / Lonny 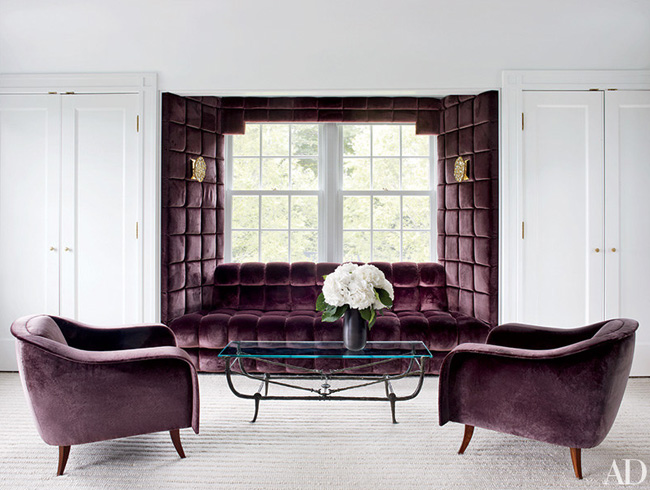 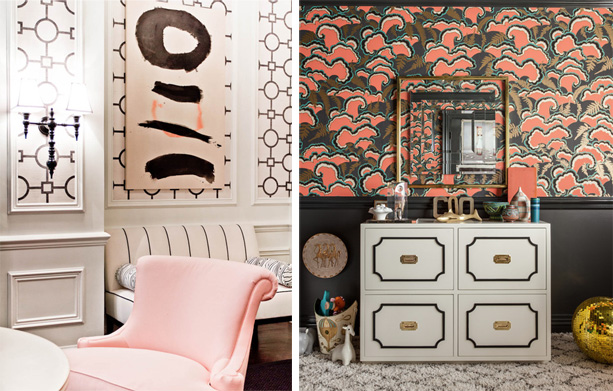 above: Tobi Fairley / House of Honey / below: Domino 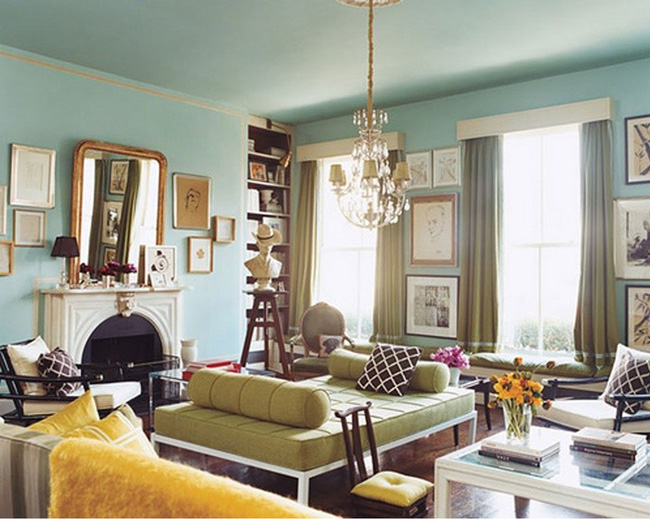 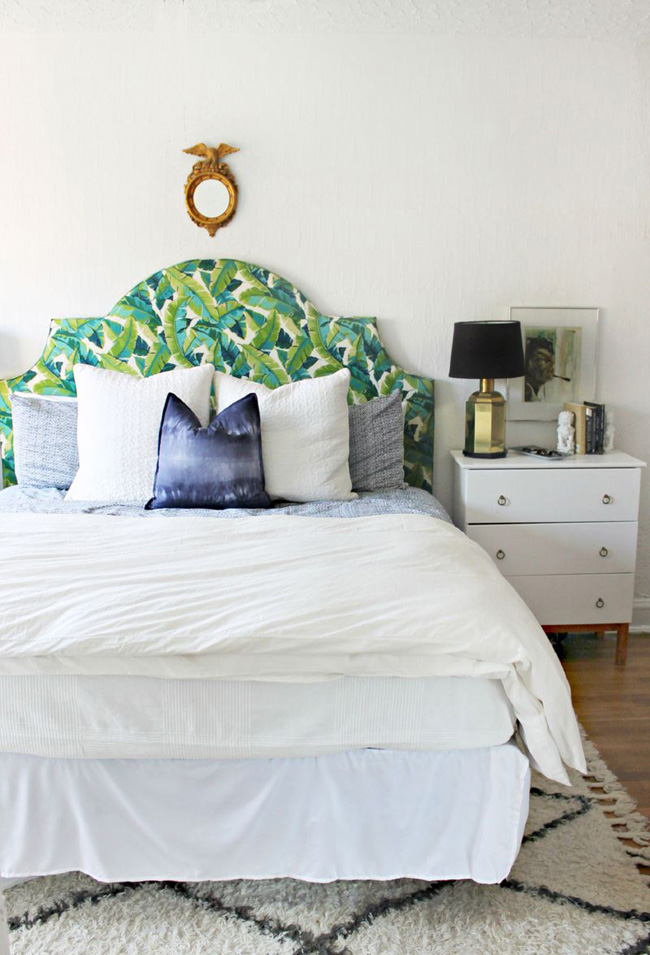 So much glamour and tons of inspiration! Does this inspire you to add a little glamour to your home? –Mandi