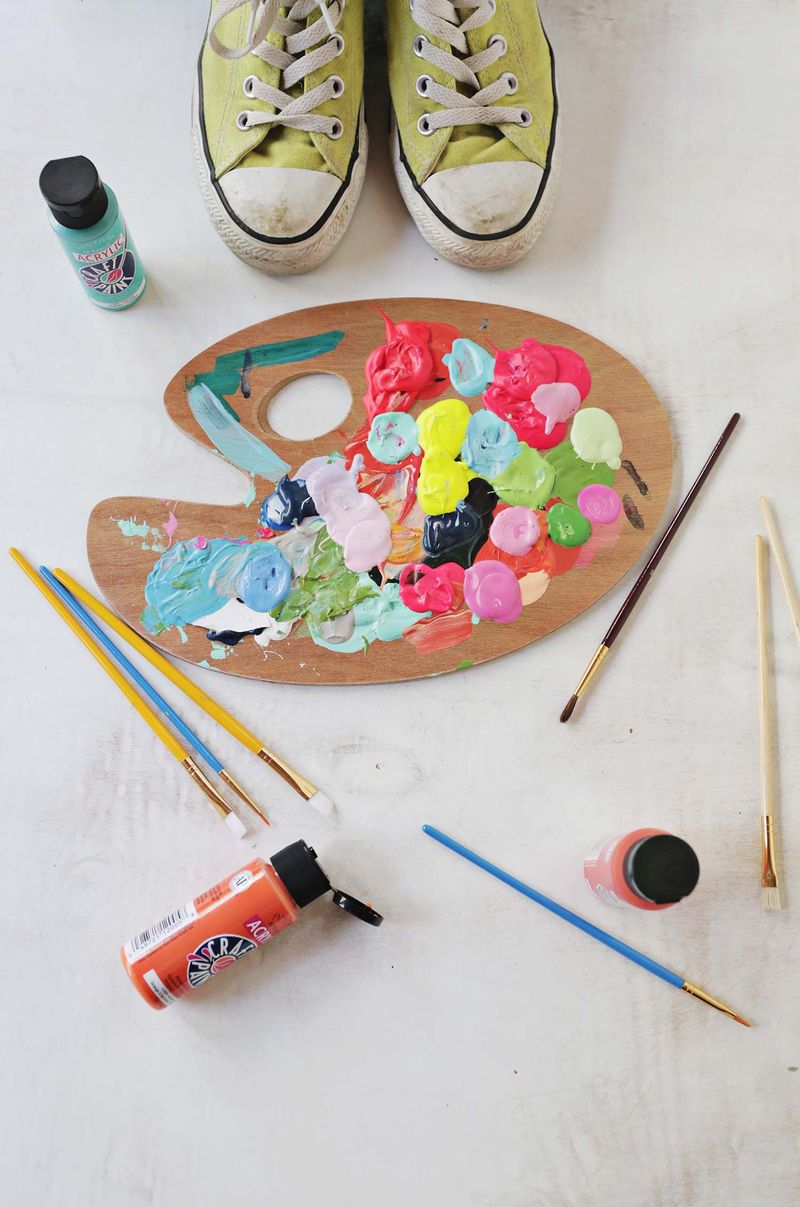 I’d like to throw some thoughts about creativity out at you today. This is something that I touched on during my speech at Meet the Blogger this past month, and I just wanted to delve a little deeper into the subject with all of you. Here’s the thought:

Creating work or being creative is a process and not a destination.

I have to admit out of the gate here that this is certainly not my own original thought. In fact, I don’t know who thought of this first, but I grew up hearing my mother (a successful abstract artist, among other things) saying something along these lines. Still to this day I’ll hear her say, “It’s about the process.” There’s quite a few reasons why I find this thought SO immensely encouraging as someone who strives to live a creative life.

To me, my mother’s sentiment of “it’s about the process” is a more articulate way of saying, “It’s OK to totally suck at something at first.” Which is just great because, I don’t know about you, but whenever I’m first learning how to do something, I’m usually not very good, at least for a while anyway (and sometimes never, depending on what we’re talking about). There are ALL sorts of examples out there of very famous artists, inventors, and other creatives whose early work wasn’t critically acclaimed or may have even been deemed a total failure. One that my husband and I always talk about is Louis C.K. We both LOVE his show, Louie. If you haven’t seen it, you’ve got to check it out. It’s funny, honest, and shockingly vulnerable at times. It’s awesome and has won a few Emmy awards, so it’s not just me that thinks so. But this is also the same guy that directed Pootie Tang, which was not, uh, so critically acclaimed, let’s just say. I think Louis has even said in some interviews before that he feels that movie is not the work is he most proud of. I am such a big fan of Louis C.K. that I almost even hate to use him as an example, but I think the larger point is that his work is amazing and I don’t know if he’d be writing and making the stuff he is now if he hadn’t gone through all the other stages that every creative has to go through. If you want to read about some other folks who failed at first, check out this article.

Another example I’d like to share is something from my own life. This past year I took my first wheel throwing (pottery) class. I did this just for fun and to spend time with my mom and sister who I had also convinced to take the class too. I have no ambition about pottery in that I don’t ever plan to make money or achieve any notoriety in the pottery world. So although I wasn’t very good at it at first (and honestly I’m still not very good), it didn’t bother me. I just wanted to learn something new and make something for the sheer pleasure of making. And I accomplished those goals easily.

One thing that this shows me is that when you’re first approaching a new creative endeavor, it’s best to come at it just for the sheer joy of making and not because you dream of doing it for a living or gaining fame in that field. You very well may be able to do these things, but you’ll probably be able to weather the sucking stage better if you don’t put so much pressure on yourself. Or at least that’s how it is for me. This is probably the number one thing I think about when I see someone just starting a blog or just taking up photography, acting, writing, painting, etc., and they want to turn it into a career. They very well may be able to, BUT they’ve already set themselves up to enjoy the process (which is necessary, and cannot be skipped no matter how talented you are) so much less. It bums me out for them and makes me nervous that they won’t be able to sustain the practice because they never fell in the love with the making in the first place.

2. It’s OK not to share your work that sucks. And it’s OK to share it if you want.

Sometimes I feel there’s this misconception that if you don’t share everything, you’re not authentic. And I just can’t get on board with that way of thinking personally. Putting your creative work out there is HARD! Like so hard that many people just can’t do it and never do. And for that reason today, I’d like to give you permission to not share anything you don’t feel ready to share. It’s fine. I don’t think you’re pretending to be perfect if you don’t show me all your mistakes. Feel free to go hide by yourself for awhile and just create a bunch of work that totally sucks. You’ll learn so much! And I don’t think you need to be worried what I think of all that work—it’s your creative journey, so feel free to keep it private if you want.

Now I’m going to tell you the opposite. And that’s because if you want to share what you’re working on that isn’t very good yet, that’s perfectly fine too. You’ll need to be real with yourself and know that you might get some tough feedback (especially if you’re sharing online—the internet can be tough), but you also might need that accountability of putting stuff out there, and I get that too. If you want to share things before you feel you’ve mastered something, go for it. I think putting work out there is one of the fastest ways to push yourself to the next level creatively because it forces you to face feedback (from others, but also from yourself) and can help to push you forward.

Side note about this: if you see a fellow creative putting work out that you think isn’t that great, be honest but kind. The honesty will help them grow and the kindness will be appreciated and repaid to you one day. Karma and stuff.

3. Your best attempt will ALWAYS be better than your best intentions.

Don’t fill your life with excuses. Finish your best attempt, and when you’re ready, put it out there! You will learn and grow so much. No matter what else happens, your life will be enriched from the act of being creative. I know, it probably sounds crazy, but I really think it’s true. I think we were meant to make. And the rest is beyond us anyway, so don’t sweat it too much. The best thing you can ever do for yourself is set a deadline to finish and hit it. Simple, but SO hard sometimes.

The bottom line is this: a creative life is a long, messy, and super fun life. It’s not all perfect. It doesn’t all have to be lived in public. And the most important thing: it’s yours to live and to enjoy. I hope you find this as empowering as I do.

Welp, there’s well over 1000 words on the creative process. I don’t want this conversation to be one sided, though, so feel free to share your thoughts and comments too. xoxo. Emma