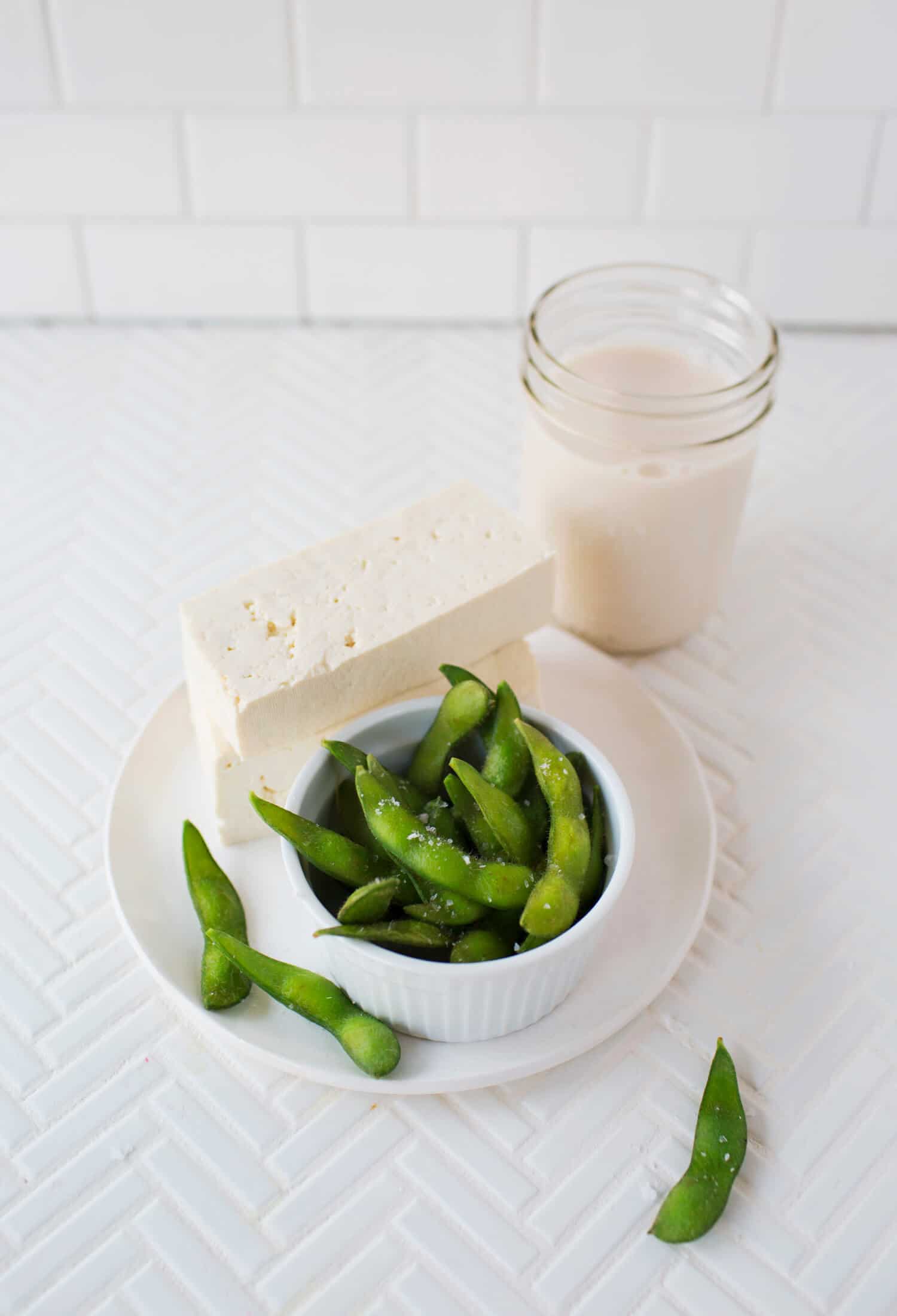 Soy comes from soybeans, a vegetable in the legume family. The beans may be harvested early when they’re still green (also known as edamame), or when they’re mature and a light brown color. They can be cooked and eaten whole or processed into a number of different products including soymilk, tofu (the “cheese” of soymilk), miso, tempeh (a fermented whole soybean product), soy nuts, and soybean oil.

Soybean’s most famous characteristic is its protein content, making it super popular among plant-eaters. It’s comparatively higher in protein than many other vegetables and the amino acid content mimics what humans require, making it a sought after protein source for vegetarians and vegans. Soybeans are also higher in fat than other beans and contain both essential types of fat, omega-6 and omega-3, with the majority being the unsaturated omega-6. The type of carbohydrates found in soy promotes healthy growth of intestinal bacteria by providing the bacteria with a food source. Soy is rich in other nutrients as well; it contains iron, folate, vitamin C, potassium, magnesium, and calcium as well as certain phytochemicals that have been shown to kick-start your health. (1, 2, 3)

Soy has curiously been touted to both prevent and cause breast cancer. This stems from the fact that soybeans contain a uniquely high amount of a group of phytochemicals called isoflavones. Isoflavones from soy have some estrogen-like properties and can act similarly to estrogen in some circumstances or have anti-estrogen effects in other circumstances. Critics of soy claim these estrogen-like properties may be harmful to those at risk for breast cancer, however, the most recent evidence does not point to this.  Some evidence has even suggested that soy isoflavones may be beneficial for those with certain breast cancers. Even more compelling research suggests that women who consume soy in childhood and teen years have a lower risk of developing breast cancer later in life. The bottom line here is, at a minimum, we don’t have good evidence to show that whole soy foods are unsafe for healthy women and they may actually have some benefits. There is less evidence available when it comes to isolated soy protein—protein that has been extracted from the whole soybean—which is often found in soy protein supplements and soy meat alternatives like veggie burgers. (1)

Women are not alone in reaping the health benefits of soy. It has been shown to reduce cholesterol, a risk factor for heart disease, although whether this translates to a lower incidence of heart disease events (like a heart attack) is still unclear. Isoflavones may also help protect the arteries. Considering heart disease is, globally, the number one killer, that could mean powerful things. Other potential benefits involve improved bone health and prostate cancer reduction, although it’s likely your intake of soy needs to be lifelong to get the bone boost. (1)

What should I eat?

So, let’s say you want to start chowing down on some soy. What’s the best soy food to eat? Vegan for Life (1) suggests we take some guidance from traditional Asian diets, where people have thrived eating soy for over 1,000 years. In fact, residents of Okinawa Island, Japan—where soy is eaten on the daily—are famous for having the longest disability-free lifespan in the world. (4) The main sources of soy in traditional Asian diets are tofu, soymilk, edamame, and the fermented foods miso, tempeh, and natto. These are the soy foods I would suggest including in your diet. Make sure to keep an eye on the ingredient list of soymilk; I would choose a brand without added sugar or flavoring. I also recommend choosing organic soy products or those labeled non-GMO whenever possible.

What about all those meat alternative products like veggies burgers and the like? They generally contain soy as soy protein isolate. While there is no reason to believe the isolated protein is harmful, it may not have some of the same benefits as the whole food would. (1) There are also a wide variety of soy meat alternatives available that contain a wide range of ingredients. I recommend reading the ingredient list and choosing those with the fewest ingredients as well as ingredients that you recognize. While meat alternative products can be included in a healthy diet, I would suggest less-processed versions of soy like tempeh, edamame, soymilk, tofu, and miso. Or you can experiment with homemade meat alternative recipes and you’ll know exactly goes in ’em. (Try Emma’s Spicy Edamame Burger recipe for a yummy start.) As far as how much you should eat goes, there is no official requirement for soy in our diet. If we look to traditional Asian diets for clues, I would suggest 1-3 servings per day.

Now that you have some info, I hope you can make an informed decision as to whether soy is right for you. I believe soy can certainly be part of a healthy diet. As with many things in my diet, my goal is to eat it in a form as close to the way I’d find it in nature. In soy’s case, that means whole soybeans, usually as edamame. Soymilk, tempeh, tofu, miso (or even natto if you’re adventurous) have a little more processing but can add a healthy variety to a plant-based diet. Soy has been cultivated and consumed for over 1,000 years and I see no reason to stop anytime soon.

A note from Sarah:

Great job, Lindsey! As previously mentioned, soy contains both omega-3 and omega-6 fats, predominantly the latter. Soybean oil, considered a vegetable oil, is one of the most commonly used oils in processed and convenience foods, thanks to its high smoke point and cheaper price tag. Omega-6 fats are polyunsaturated and, in excess, can be pro-inflammatory. While inflammation isn’t always a bad thing (inflammation helps heal cuts and wounds), too much of a pro-inflammatory food can be bad as it may worsen chronic states of inflammation now known to cause adverse conditions like diabetes, obesity and heart disease. So how much is too much? Recommendations are that we aim for a 1:1 ratio (omega-6: omega-3). Soybean oil falls around a 9:1 ratio (58% omega-6: 9% omega-3), yikes! Oils are highly concentrated and when consumed regularly, you’ll quickly find yourself exceeding the 1:1 recommendations. The best way to counteract this is to ensure you’re consuming plenty of healthy omega-3 rich oils—like flaxseed oil—while not going overboard with the omega-6 rich processed foods and oils.