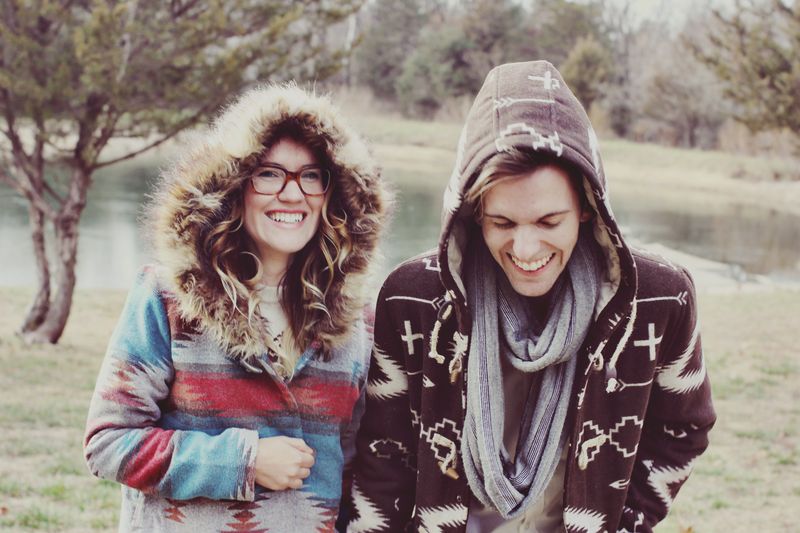 Have you ever really wanted something, but then you tried to convince yourself you didn't? Or at least, you didn't mind if it didn't happen the way you wanted. That was how I was feeling on December 26th, which is Trey's and my one year anniversary. Even though we've only been dating a year, we have known each other for a very long time. I sorted of hinted at our story when I talked about it here. We have a lot of history together, but this year in particular has been nothing short of magical. And I don't use that word lightly (I'm a hardcore Potter fan). So if you don't like maximum #feelings, I'd stop reading now. 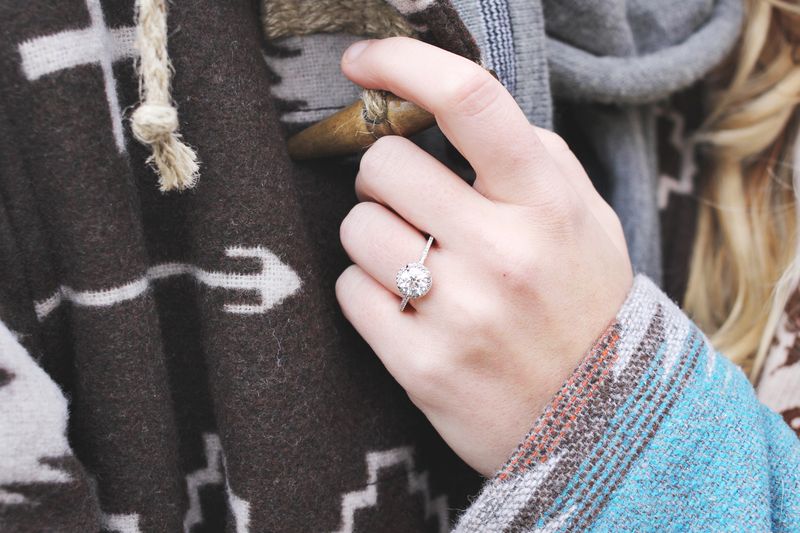 So as our one year anniversary approached I sort of wondered if he might pop THE question. It was in the back of my mind for sure. And even though the subject has come up a number of times, we had never really talked about in a super serious way. Honestly, I sort of avoided it, because I really did want to be surprised when the day did come. But this also leaves you thinking, "Hey, so like, when is that day anyway?"

Trey had mentioned that we should save our Christmas presents for our conveniently timed one year anniversary. The tentative plan was to exchange them during our anniversary date night. I sort of wondered if my gift might be a ring, but then I immediately tried to convince myself that wasn't the case. Because if my gift wasn't a ring, then no matter how sweet/thoughtful/romantic/expensive/perfect his gift was I would be sad. And that sucks. So I had to tell myself it wasn't a ring. The end. 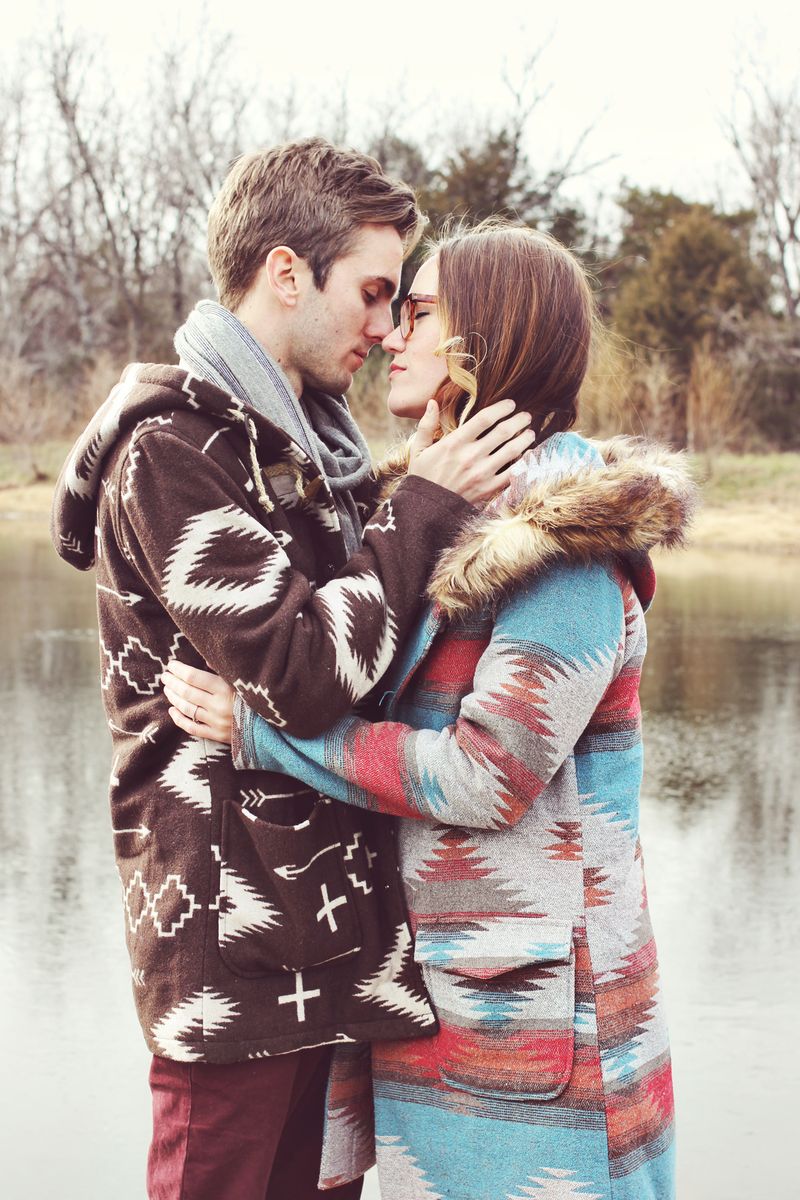 We wanted the night to be built around memories, so chose a date filled with our history. Turns out our history is like every other couple in the world, because that meant dinner, movie and drinks. Cliches aside, the restaurant was our favorite hole in hole in the wall, we both have an unnatural obsession with movies, and the bar was where it all began. Don't worry. We made sure it was a romantic movie, so Django Unchained didn't make the cut—yet. But the night felt like it was coming together kind of rushed. The movie wasn't playing at the right time or the right theater, so we had to shuffle the order of things. Plus, he'd said he wanted to open our presents at the bar. I don't think I'm that up tight, and I certainly (ahem) like a drink or two. But a proposal at a bar didn't really seem like our style. A proposal night would be really planned out and not end at a bar, right? Duh. I've seen the movies. I know how this goes. 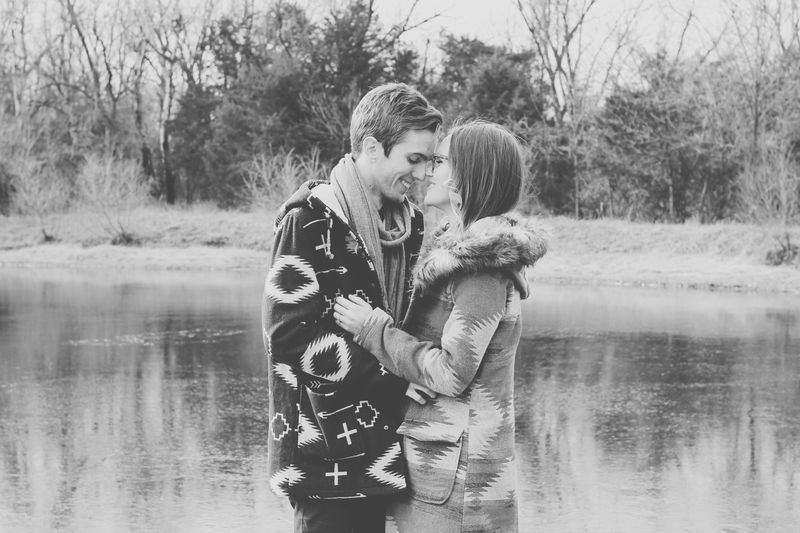 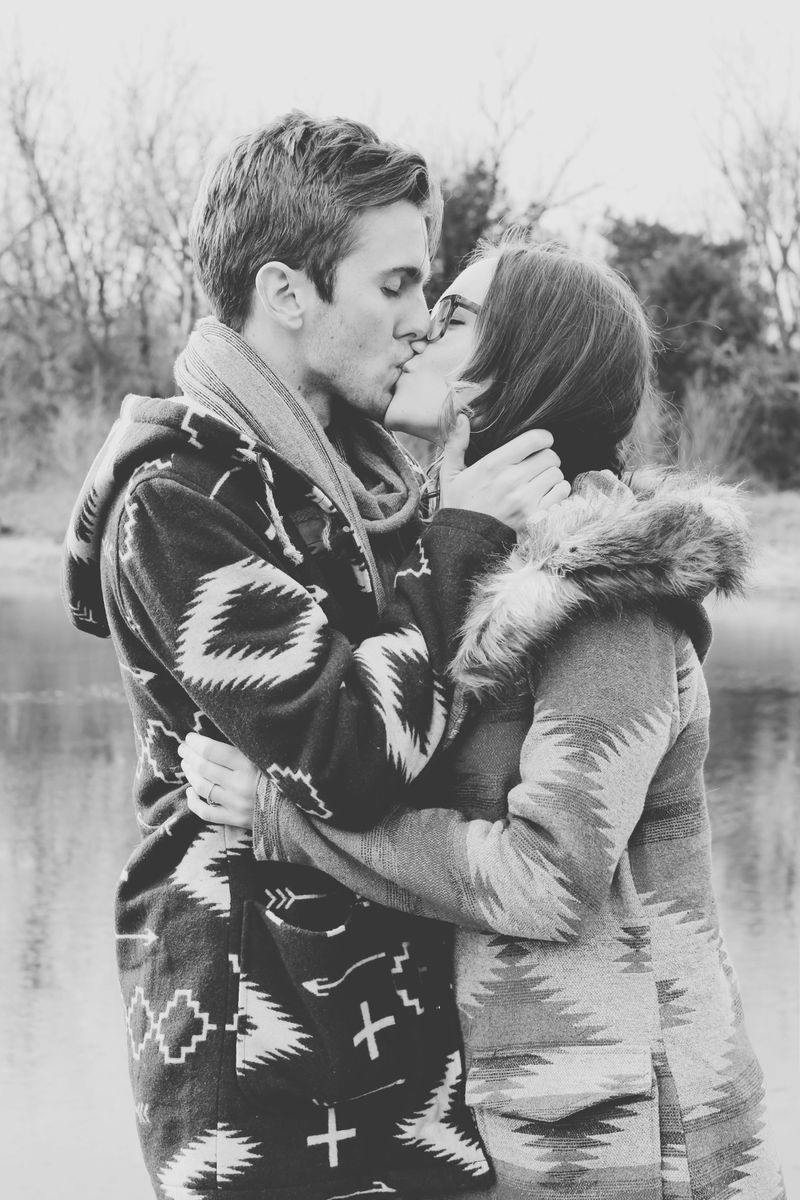 Dinner was perfect, the movie was really sweet (Have you seen Silver Linings Playbook yet? A.dor.a.ble.), and then we headed to our spot and ordered our usual drinks. Apparently the day after Christmas at 11p was the time to be at this bar. We awkwardly carried our (kind of big) wrapped presents through the crowds saying our hellos to familiar faces, as we made our way to a nestled little two-top made just for us. We exchanged gifts. I gave him a coat (pictured above—yeah, we match—not ashamed). He gave me a set of copper mugs that I had been talking about wanting. He's always so good at catching those. You'd think I would catch on and mention things intentionally. But I'm oblivious, apparently. He also had made me a mix CD (yes, we're forever stuck in 2004) of songs that had been important to us this past year. It was perfect. Something I really wanted mixed with something super romantic. Perfect. And even though I knew it was perfect, I felt a tiny bit of disappointment. A teeny tiny part of me had still been holding on to one last slice of hope that my gift was going to be a ring. It wasn't. But it was still so perfect and such a wonderful night. I almost felt a little guilty for feeling this little tinge of disappointment. 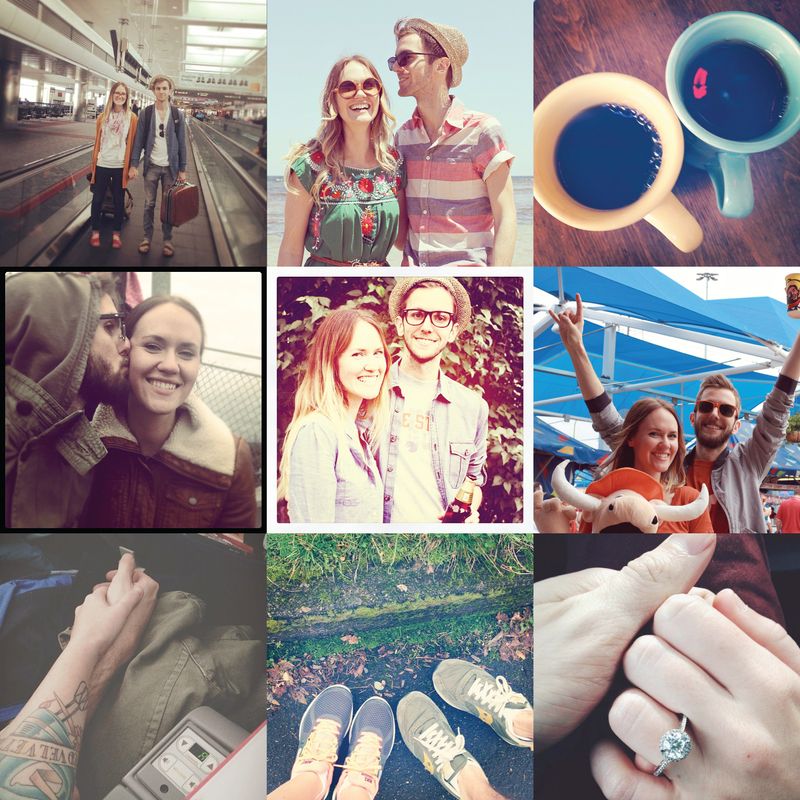 As we were talking and laughing at the bar, it hit really me: The proposal isn't going to happen tonight, and that's okay. I have a really romantic boyfriend who gave me a really romantic anniversary. I was happy. The night was winding down, and we got in the car to head back to my house. We immediately popped in the mix CD. The first song is something he recently wrote with his band about us (I'd been bugging him a while to get it recorded, which he did just for this CD). It would always make me cry when I heard it live. The recording was no exception. What can I say, I'm a crier sometimes. On the way to my house is this little church that I've never been inside. But in the church's little gravel parking lot is where Trey and I had our first kiss last year. It's sort of the site where this new chapter of our story started. So it's kind of a significant spot to us, but we hadn't been back since. We usually just smile at each other when we drive by. But this time Trey slowed and pulled into the parking lot. I thought maybe he wanted to listen to the CD in that spot, since it meant so much to us. I liked that idea. He asked if I wouldn't mind being super sappy and dancing to the next song with him in the light of a candle he'd brought. I thought that sounded really cold but super sweet. I was game. We danced a little, hugged a little, kissed a lot. And I thought, "You know, this night was wonderful. Who cares that we aren't getting engaged just yet?"

But then Trey slowly dropped to one knee and pulled a small box out of his pocket. I felt my insides get really hot/cold/excited/anxious. I cried a little (yes, again) and listened as he asked me to marry him. It is the weirdest thing to be in a moment you immediately realize is going to be one of those big, significant memories in your life. I tried to take it all in, everything about where we were standing and how everything looked and felt and smelled (Leslie Knope style). I don't want to ever forget any of it. 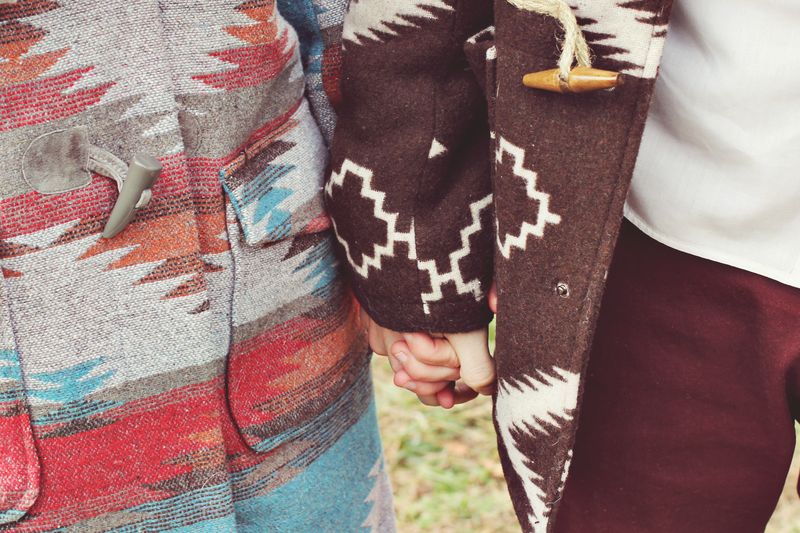 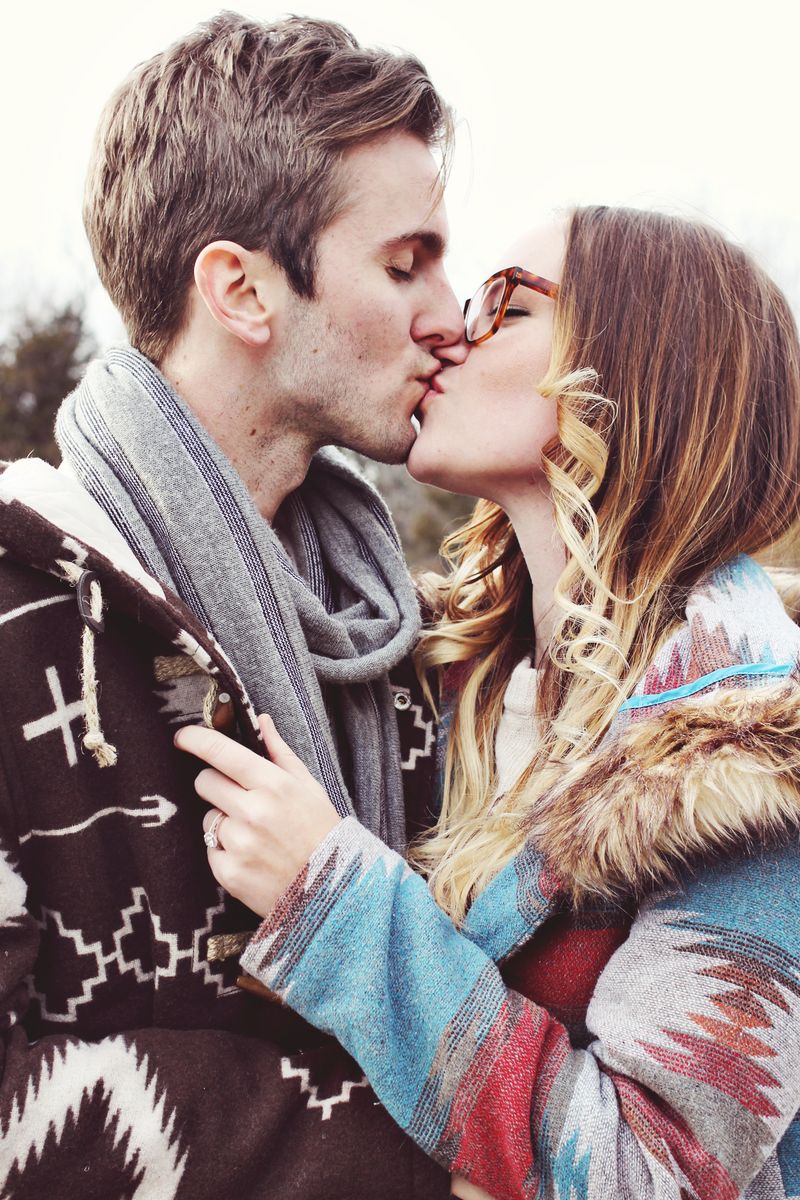 CONRATS! And God’s Blessing to you both! Question though about the ring! IT is gorgeous, who designed it??

All the best congratulations. One of my favourite engagement-stories ever. Great balance between romance and personality.

Wish you all the bestest!

SO happy for you two! Congratulations! Loved reading this. 🙂

I cried reading your story – it’s so lovely and I’m so happy for you two!

alissa- mine is from Ruche and Trey’s is from TopMan

wonderful story! where did you get those jackets??? i love them.

I just found your blog today and this is the first post I read.. and it made me cry a little (and I’m not a crier). So sweet, congratulations!

What a sweet engagement story 🙂 Congratulations to the both of you!

congratulations! what a sweet and amazing story.
kw, http://www.ladiesinnavy.com

Such a sweet story. Thank you for sharing. I would cry a little but I’m in public. Can’t do. Congratulations to the both of you!

What a memorable night! Congratulations to both of you!

This is such an amazing story!

Ahhhhhh!! Teary eyes! This is so lovely 🙂

YOU SAID YES!!! so freaking excited for you two, emma. congratulations on this next adventure of your life 🙂

Congraaaaats!! I’m so happy for you!! I wish you ALL the best, health, happiness, and always love. Love, love, love.