At Home With Anna Dorfman 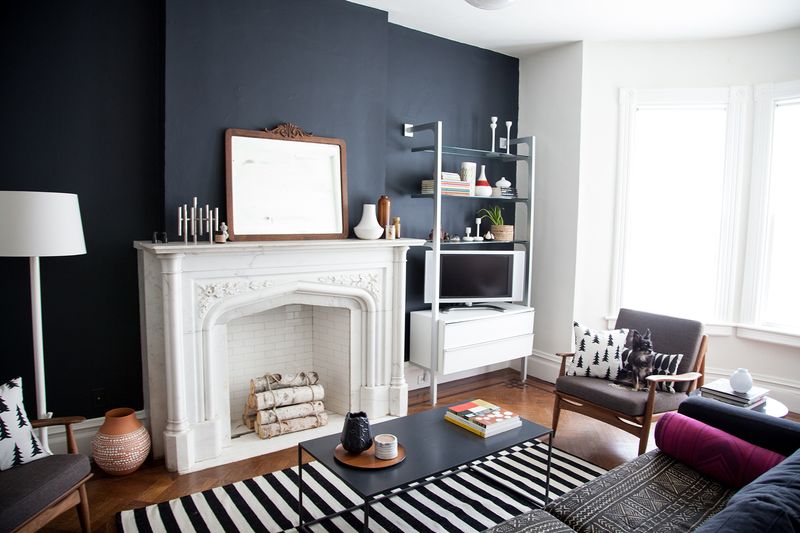 Today, we are happy to welcome Anna Dorfman to the blog to share her lovely home! 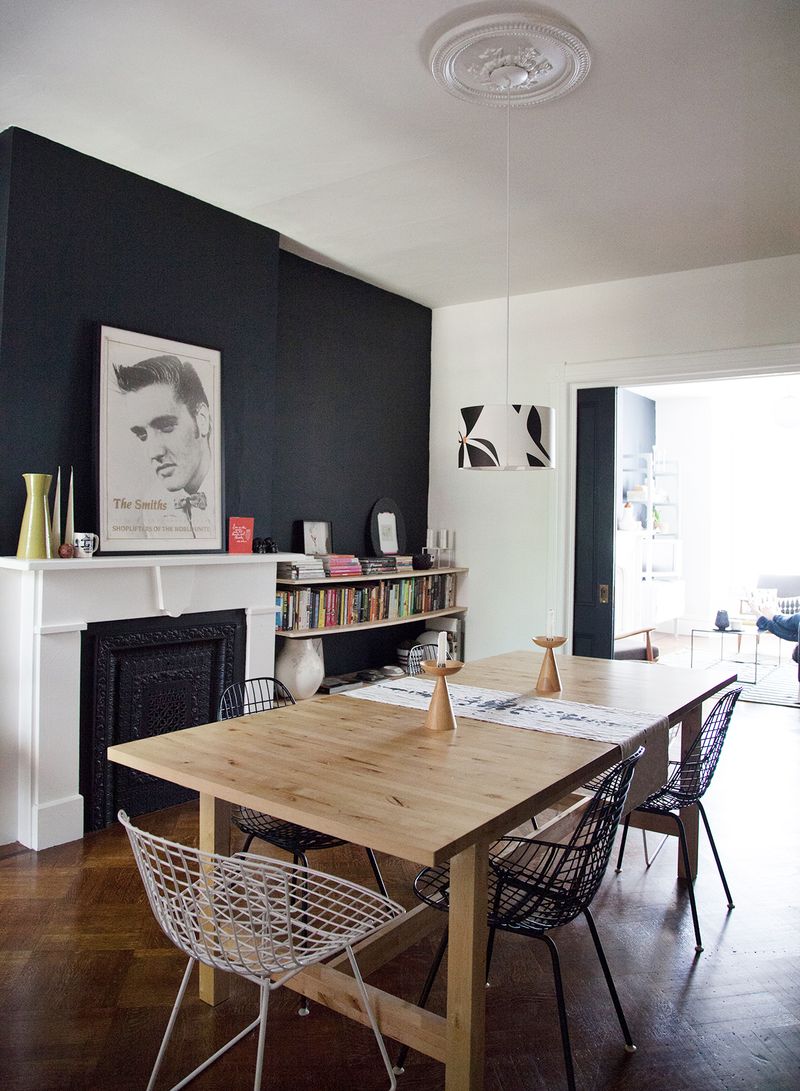 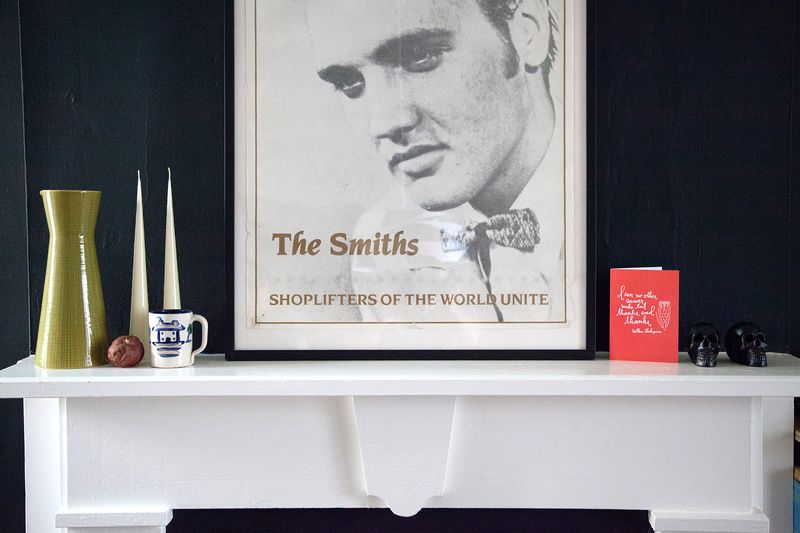 "My husband Evan and I (and our dogs, Bruno and Fritz) divide our time between two homes — a rental apartment in Brooklyn, and an 1891 Victorian house in the historic City of Newburgh. Newburgh is about 60 miles north of NYC in the Hudson Valley region of upstate New York. We go back and forth between the two places depending on what our work schedules are like (Evan is a technologist and musician, and I'm a book cover designer), but the house is really our home. We're on a loose, multiple-decade plan with renovations, the pace of which is determined by urgency, time and money. We have no deadlines. And we don't think about resale value, so we try to make sure that everything we put into the house is what we really want. As as result, our house has really turned into a sort of dream space for us. It's not in what you'd call 'the country,' but it sits on a bluff overlooking the Hudson River and is surrounded by beauty—both natural and man-made. Size-wise, our house is about 1,800 square feet. It's a classic rowhouse floor plan on a city lot, with windows at the front and back of the building. We have four bedrooms (one for us, one for guests, one for clothes, one for work) and two bathrooms, plus a small garden in back." 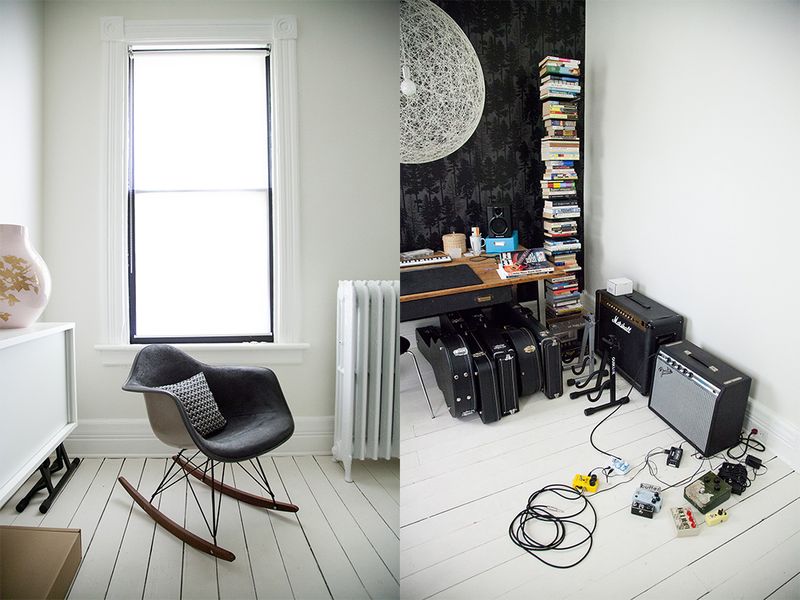 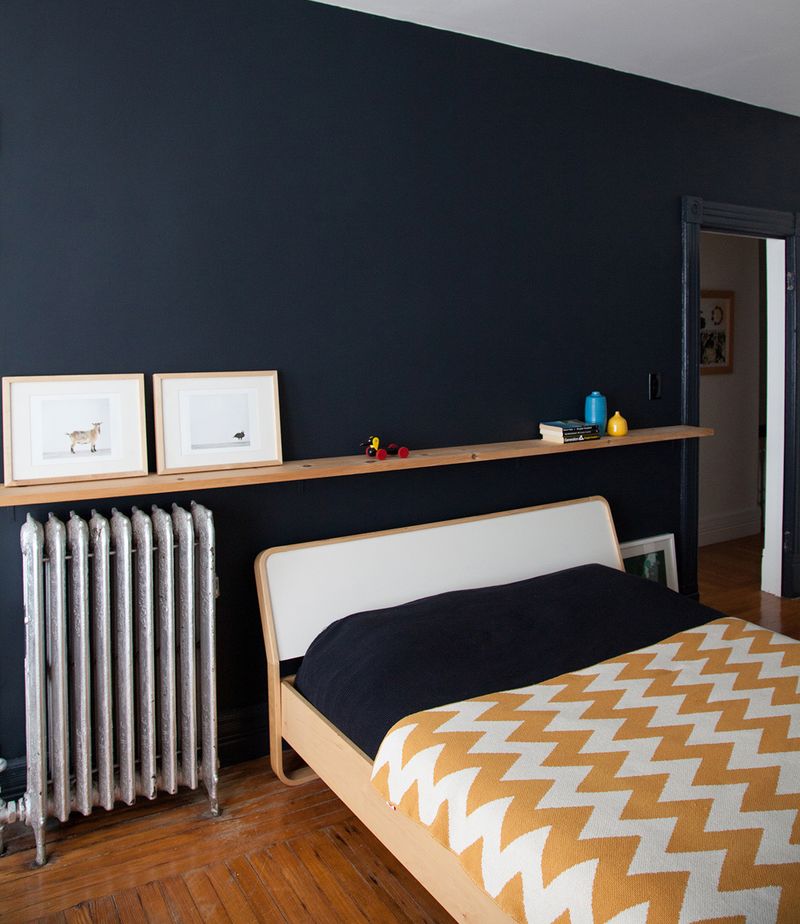 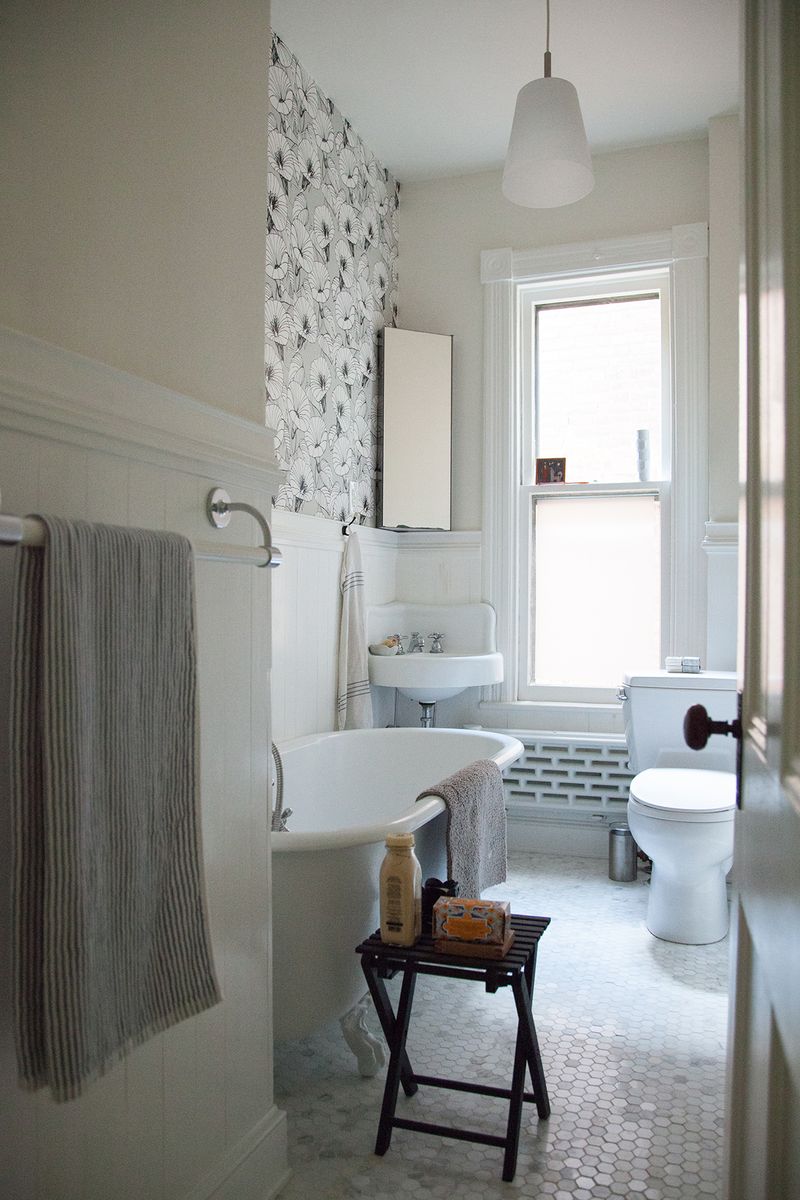 "I don't like to get to precious about objects, so I'll just say that my favorite find is the house itself. The City of Newburgh has one of the largest historic districts in the country, but it's also a city that has seen some terribly rough times in the past half century. A lot of houses have fallen victim to serious neglect and abandonment. A decade ago, our house was vacant and had plywood nailed over the windows. Somehow, miraculously, our house managed to stay mostly intact as far as original details are concerned. Even most of the original wavy-glass windows are still there! We still have the original plaster walls, all of the fireplaces, the woodwork, the massive front doors. We're very lucky. We feel very much like the house has been entrusted to us. We're here not only to fix what was broken and respect the construction of the past, but to think about the house's future when doing renovations. It's very humbling to live in a house that's almost 125 years old—it was there long before us, and it'll be there long after we're gone. Beyond the house's function as a dwelling, it's also a part of a greater community whose recovery we care a great deal about." 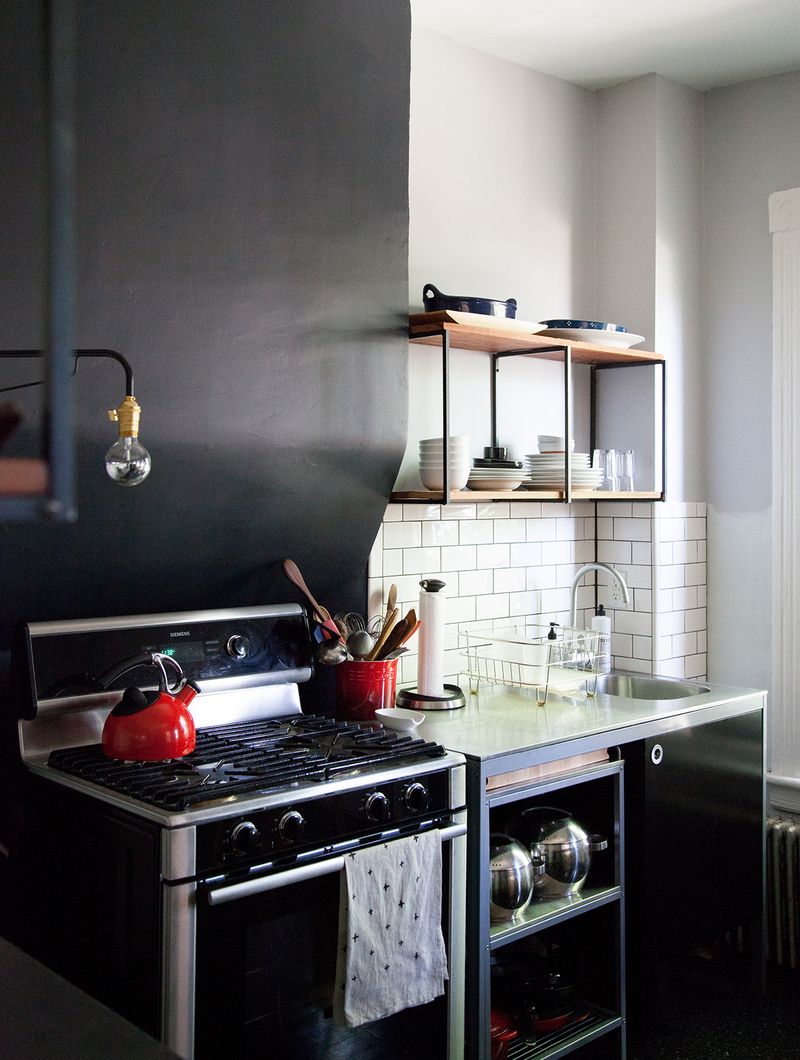 "Most of the time it's just us there, but lately we've been trying to be better about inviting friends up from NYC. I love to cook for guests, and now that the kitchen is finally being renovated for real, it's such a pleasant room to be in. We also recently finished our very, very gradual garden renovation, and once mosquito season is over we might actually get to spend some time out there relaxing! Evan has space for recording music, too, which is amazing. The dogs are always so happy and content in Newburgh—they use the entire house for lounging! Above everything, though, I use the house as an outlet for my need to transform and make better that which surrounds me." 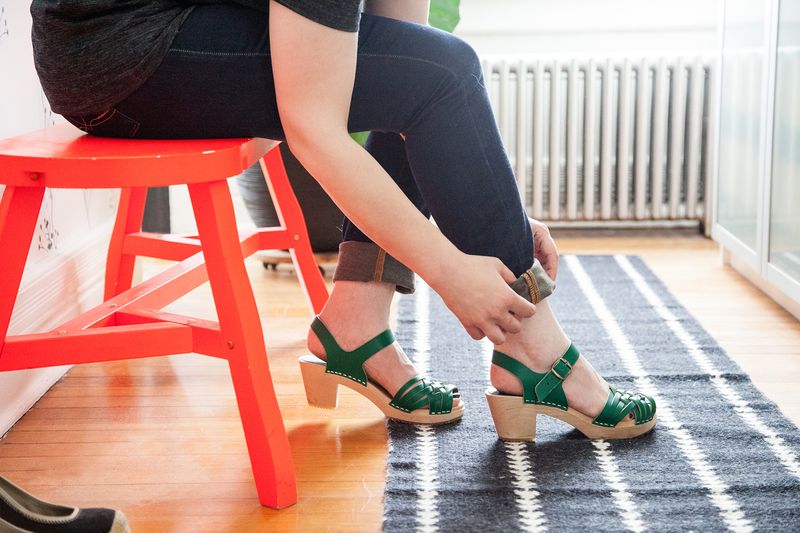 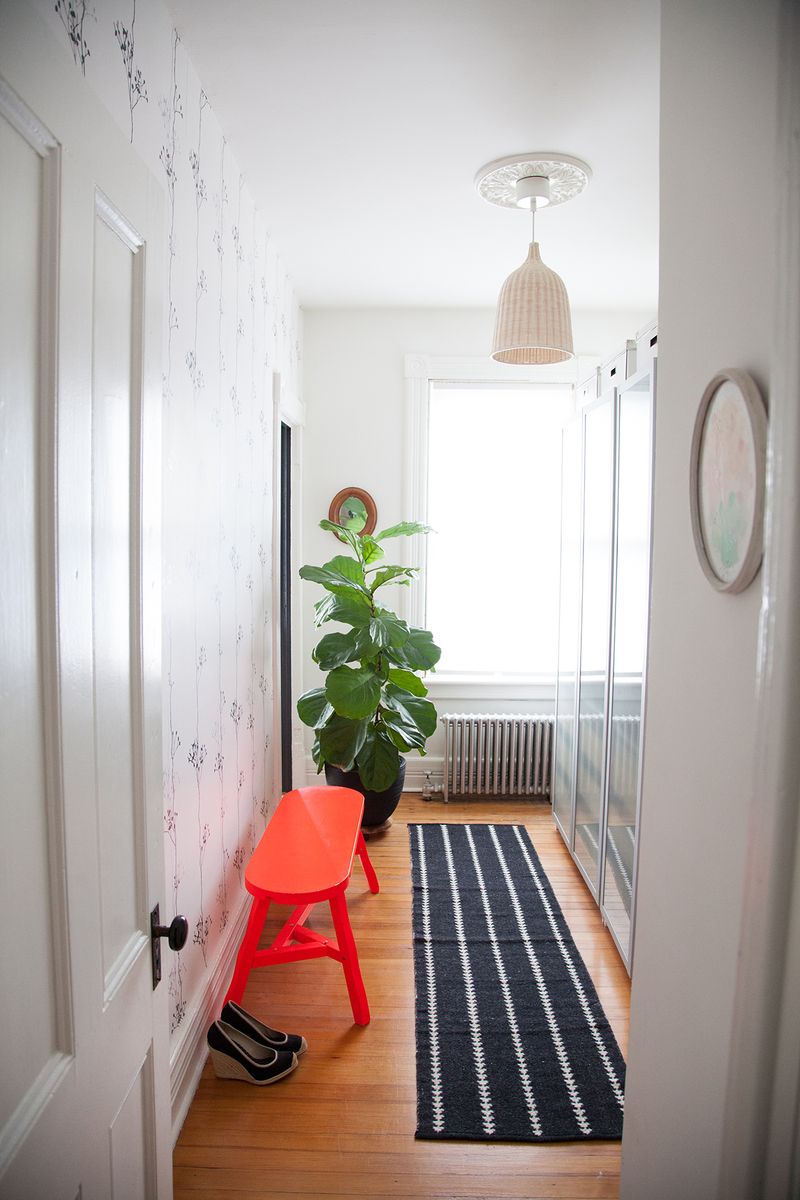 "We bought the house in early 2006. And for four years, we lived there full-time and commuted via ferry and train to and from NYC every day. For the past three years we've also rented an apartment in Brooklyn, but we always go back to Newburgh. With the exception of moving walls (something we've deliberately chosen not to do), just about everything inside and outside of the house has evolved to some degree. Bathrooms have been gutted, cast iron radiators and tubs have been sandblasted, bricks have been repointed, walls have been replastered, electric and plumbing work has been re-done. You name it, it's probably happened in our house! The house was a mess when we bought it—a true fixer-upper. I still marvel over 'before' and 'during' photos. We've done almost all of the renovation work ourselves, which is incredibly rewarding. Neither Evan nor I knew anything about renovation and repair work seven years years ago, but these days we're pretty fearless. If we don't know how to do something, we figure it out. We make mistakes and learn from them. We take our time. Right now I'm working on renovating the kitchen, which has been in a sort of 'temporary' (hah!) holding pattern for years. So far I've finished tiling two of the walls, and once we remove the radiators for repair and refinishing, I'll take care of the other two. It's really a wonder to see how far the house has come. I can't wait to see what it'll look like in another seven years!" 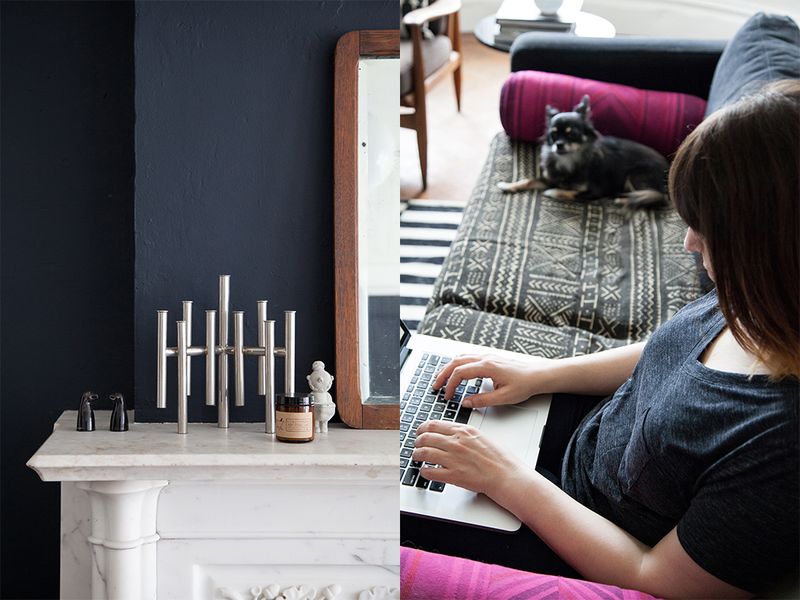 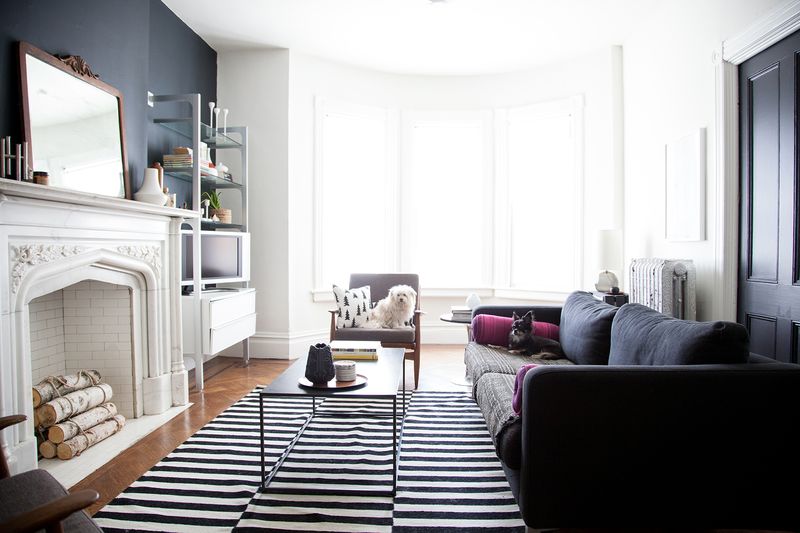 Thank you so much, Anna, for sharing your gorgeous home with us! You can find more of Anna over at her blog Door Sixteen or over at her design site.

Luba: The coffee table came from CB2. They don’t have the exact same style anymore, but this one is very similar:
http://www.cb2.com/mill-coffee-table/f8533

Your place is beautiful! Thank you for sharing the pictures. Can you please tell me where did you buy your coffee table. I love it and want the same for myself 🙂 thanks

I’m not a big fan of black and white, but this looks really cute!

I am not usually a fan of dark walls, but they look really good here with all of the natural light. I LOVE the wallpaper in the bathroom.

I adore her home & style.

I love the navy blue wall in the first picture with that rug the whole room just ties together so perfectly! The wallpaper in the bathroom is also so pretty & simple. love it!

Shannon: Evan (my husband) is the Technology Director at Domani Studios, an interactive agency based in Brooklyn:
http://www.domanistudios.com/#/agency/overview/evan-stark

It’s a little hard to explain what that means unless you’re familiar with the industry, but basically he’s responsible for figuring out technical solutions for brands who hire his agency to build websites. Ask a technologist what they do for a living sometime…you’ll be sitting there all night. 😉

omg the claw tub!!! I want to live there for the bathroom!

Usually I’m not a fan of black or really dark colored walls, but I think here it works pretty well. Especially the kitchen looks amazing!

Awesome, awesome home. But what the hell is a technologist?

Stacey: The shelving unit came from IKEA. It’s been discontinued for a while, but the name of the line was ANGA.

I am totally in love with the shelving unit in the living room! Would you mind telling me where you got it? I have been looking for something similar for ages! Thank you!

Kathryn & Christy: The Big Flip clock is by Karlsson. There’s a post about it on my blog with some info about sources:
http://www.doorsixteen.com/2013/04/01/field-report-karlsson-big-flip-clock/

Beautiful! What an amazing work of renovation! Fair play to them to have done it themselves!
I am a big fan of the wooden floors – and there is so much light!

Gorgeous! I love all the black, white, and gray. Where did the awesome time/date clock in the kitchen come from?! I’m seriously swooning over it!

Oh wow, what a gorgeous space. I love the deep purple in the lounge and the Smiths artwork too 🙂

Love the wall clock in the kitchen – where is that from?

What an awesome space! I love the dark walls and open bookshelves and pops of colour! And that bathtub is to die for! 🙂

Anna! I love her blog and her home posts!