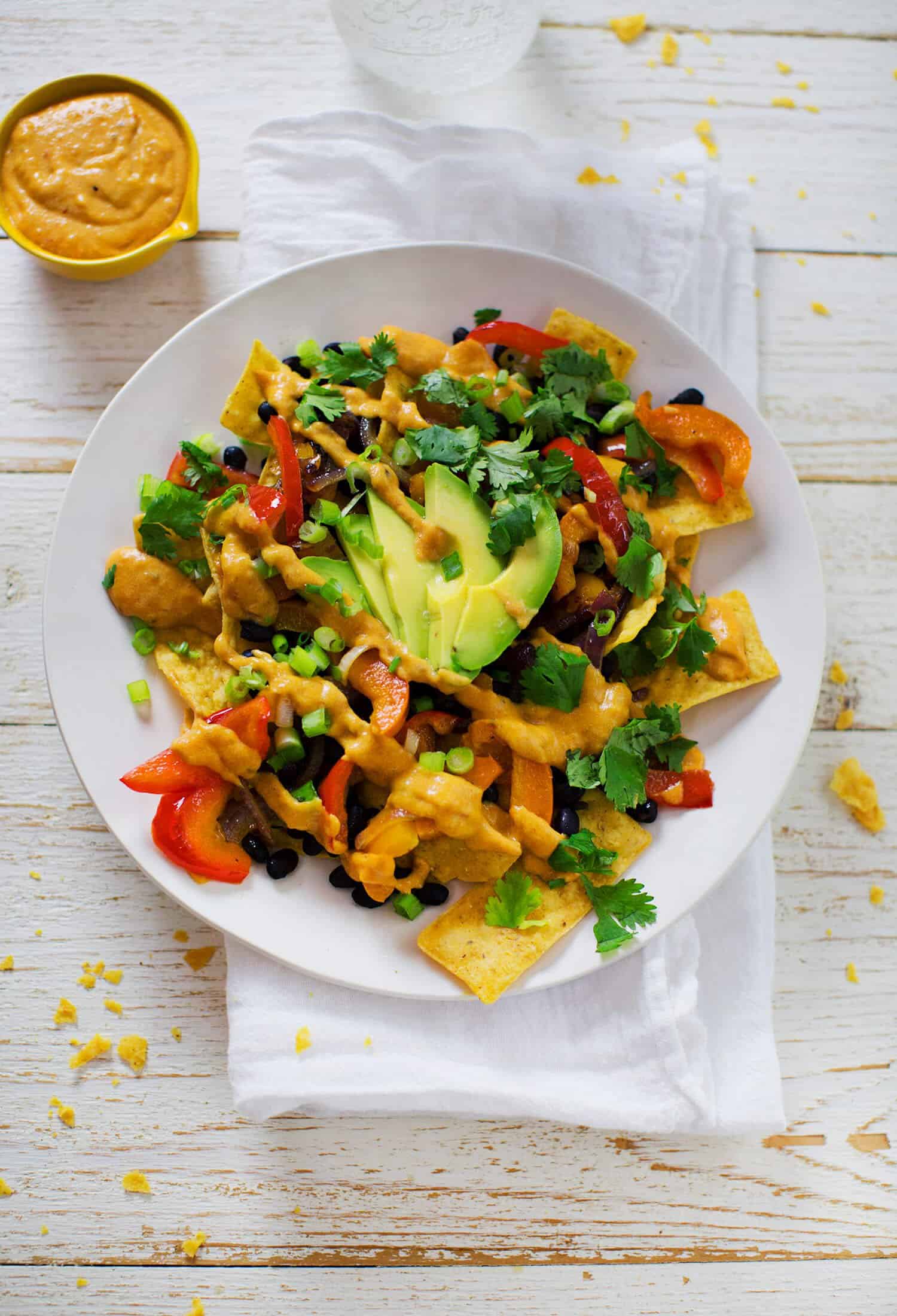 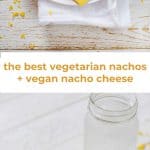 Confession: One of my go-to movie theater snacks is nachos. I know! It’s terrible. I mean who knows what is in that nacho cheese, plus the entire meal consists of chips, questionable cheese (or maybe I should say “cheese”), and for me jalapeños (from a jar, not fresh, that would be way too spicy). So not exactly a nutritious meal, although in all fairness, who goes to the movie theater to eat nutritious food?

But here is a nacho recipe, complete with some delicious nacho cheese, that you can actually feel good about eating. I should know, I ate this two days in a row since it made leftovers and I can honestly say that I like this a lot more than the movie theater version. I’m not even pulling your leg, I swear! And this version is packed with SO much good for me ingredients (like actual, real plants). Double win! 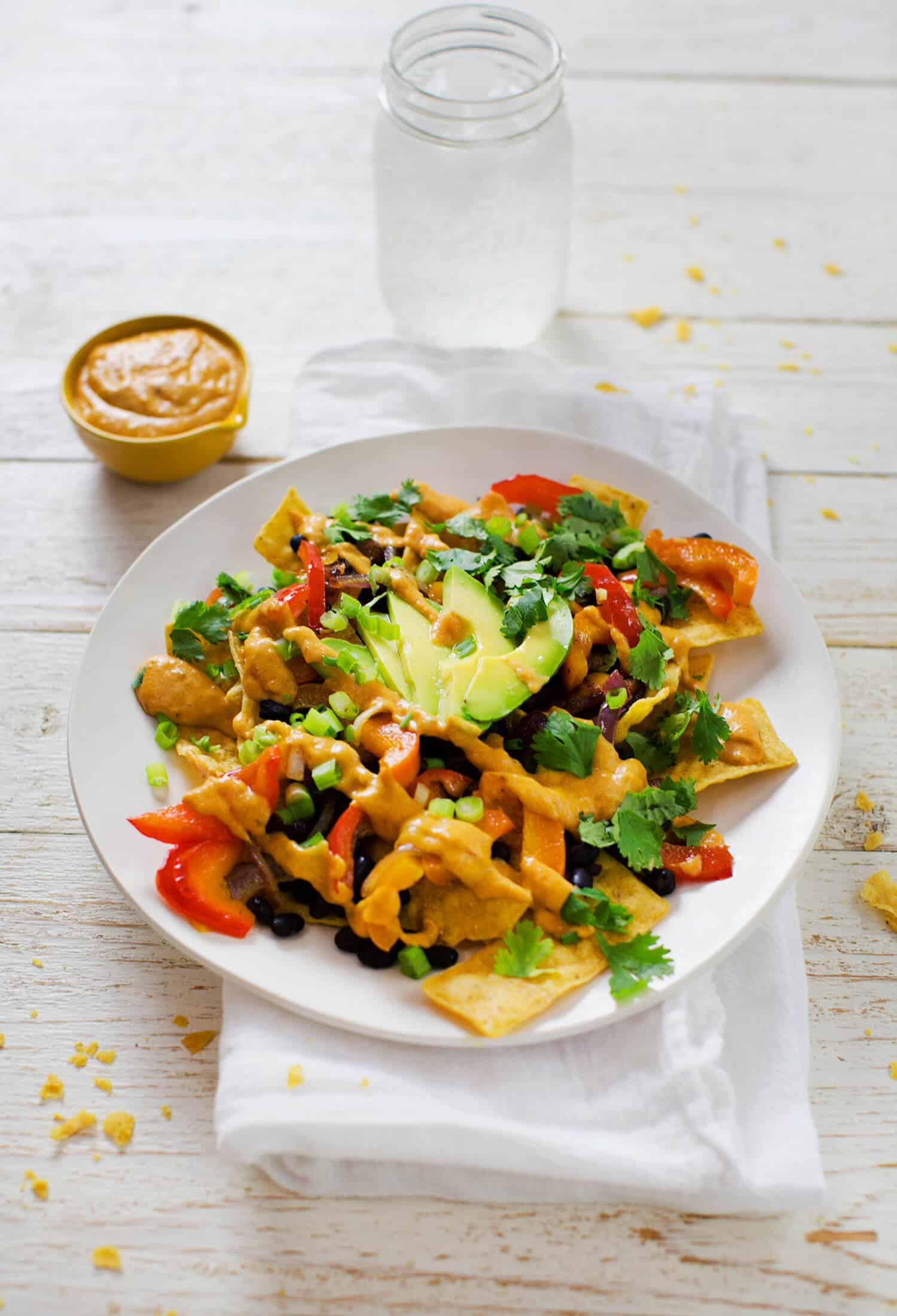 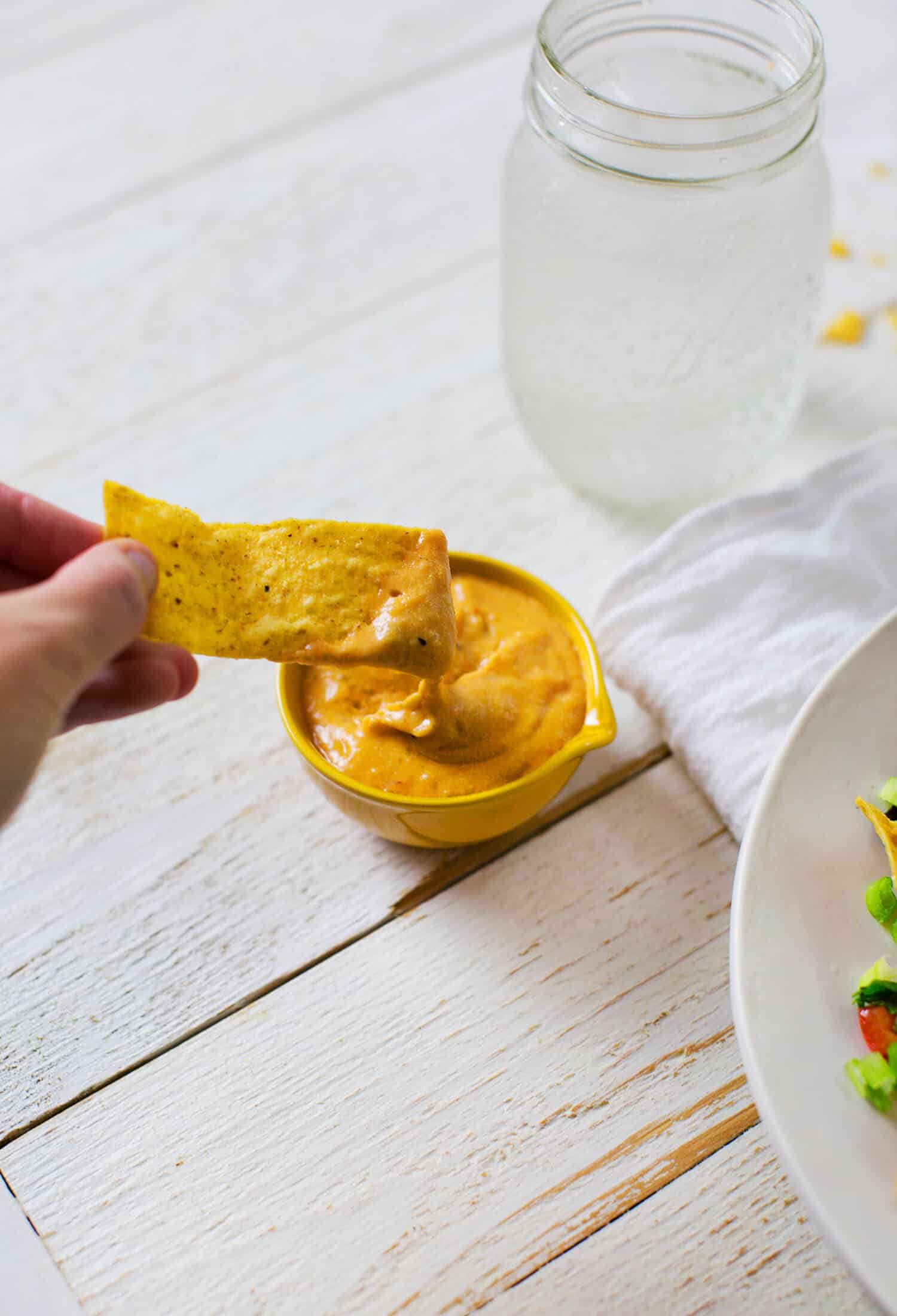 One more confession before we start cooking. I used to totally roll my eyes at the mere mention of vegan cheese, or non-dairy cheese of any kind. It just sounded really ridiculous to me and, I like real (dairy) cheese. So, why bother? If you feel similar or you’ve felt similar before, believe me, I get it. But, at least hear me out before rolling your eyes.

So this cheese is very similar in texture and color to what probably comes to mind when you think of nacho cheese. It tastes cheesy for sure, but I would say the taste is probably the most different thing about it. It’s made from mostly potatoes and nutritional yeast. If you’ve never tried nutritional yeast before, you totally should; it’s a pretty rad ingredient. Plus it packs a pretty decent plant-based protein punch (say that 3x fast!). The recipe below contains 16 grams of protein just from the nutritional yeast alone (divided by two, the recipe is for two servings). So that’s pretty cool, right? And bottom line: If you’re willing to eat the processed-who-knows-what-it’s-made-of nacho cheese, then there’s really no reason not to give this weirdo non-dairy cheese a try!

Also, I’ll probably still eat the questionable nacho cheese once in a while. But I LOVE that I can make something similar that tastes better AND nourishes my body. I think that’s pretty darn awesome.

Are you ready to nacho cheese yourself? Good, me too. 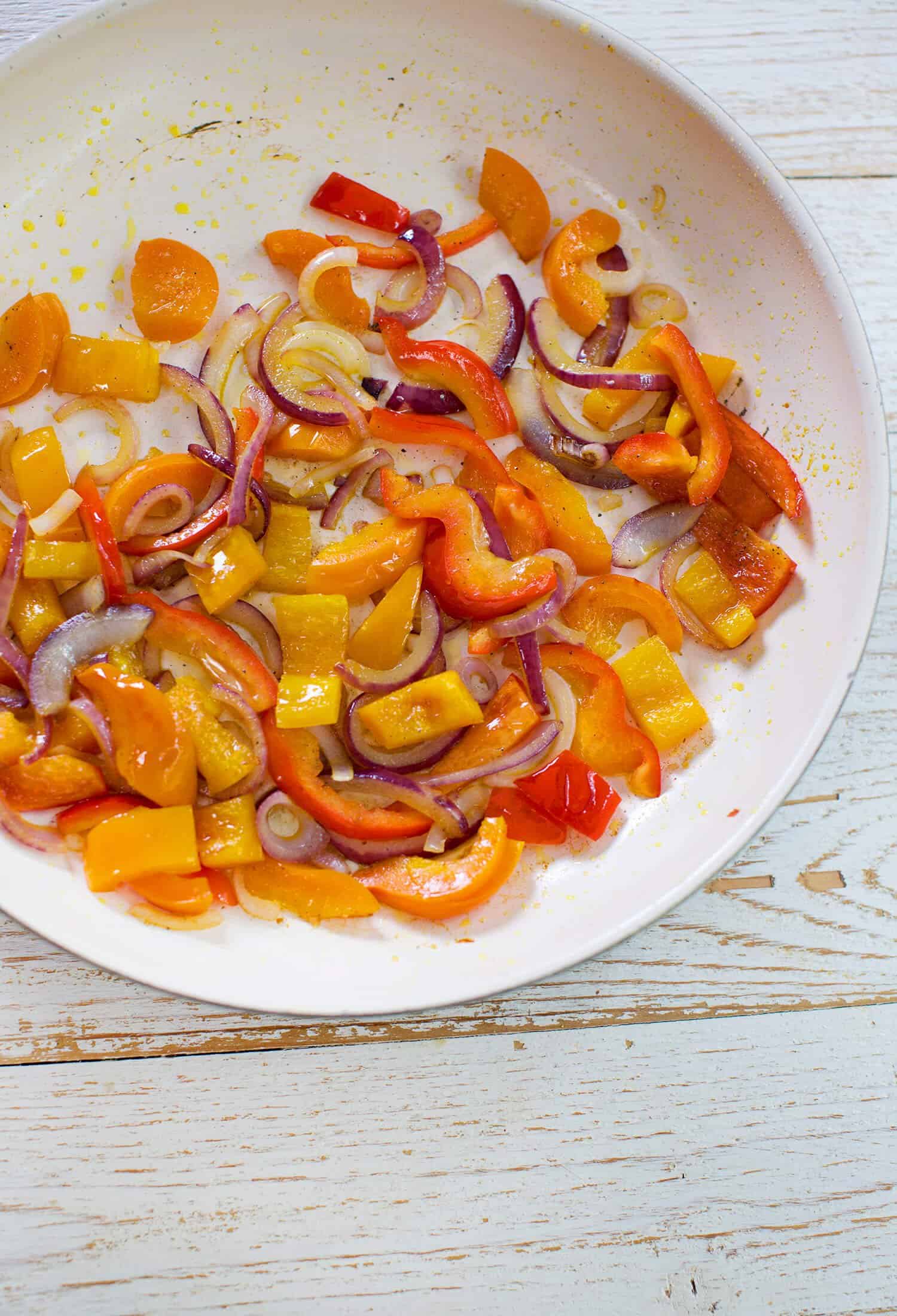 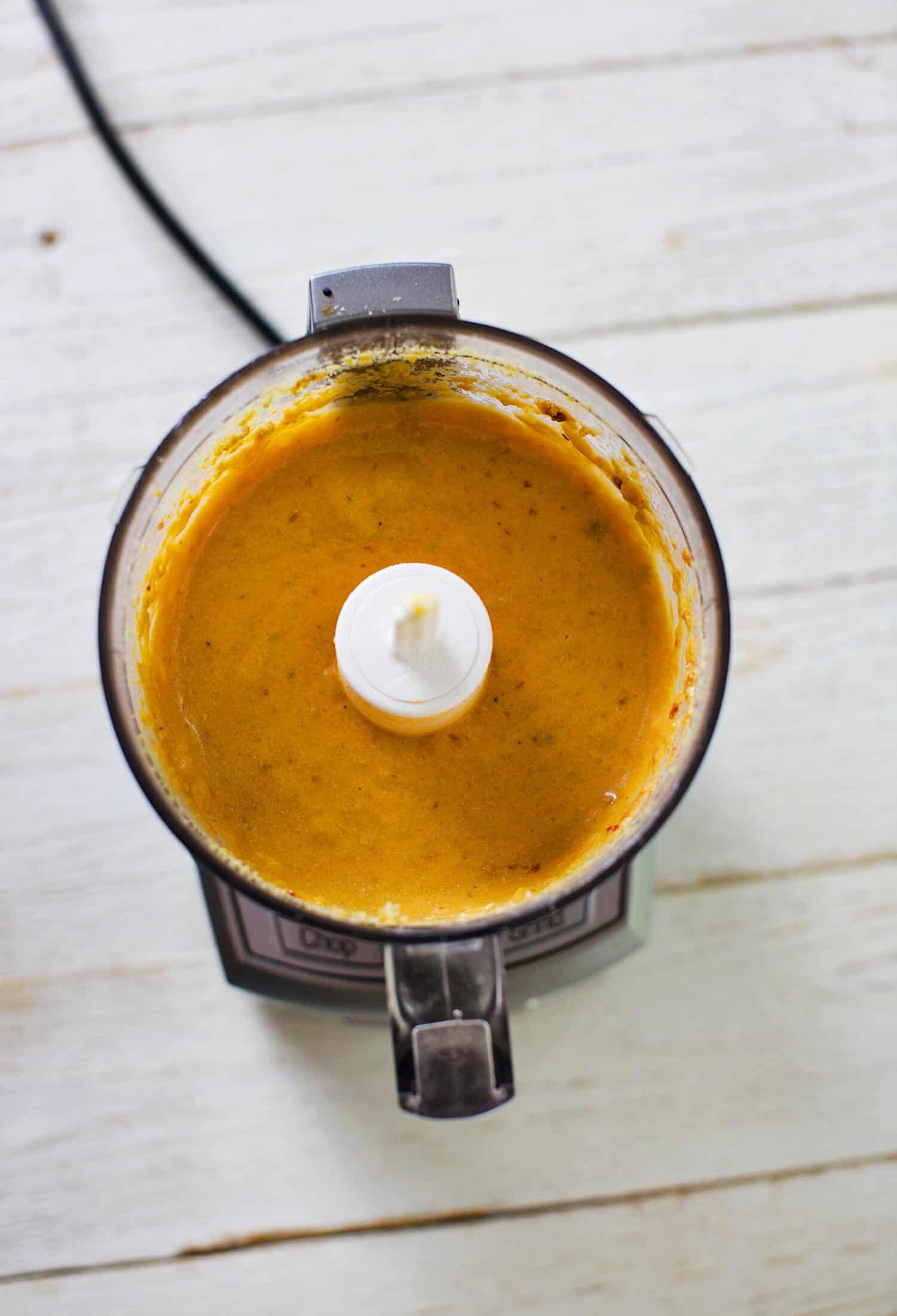 In the meantime, peel and cube the potatoes. Boil in water for 10-12 minutes until they are soft enough that you can easily mash them with a fork. Drain and add to a food processor or blender. Then add the nutritional yeast, lemon juice, olive oil, chipotle pepper, salt, and spices. Pulse until creamy. It will likely be quite thick, more like a paste at this point. So use water (or vegetable stock) to thin it to a nice nacho cheese consistency. Just add a few tablespoons, pulse, and see what you think.

Add the cooked vegetables and beans on top of a small bed or chips, drizzle in the nacho cheese sauce, then top with sliced avocado, chopped green onion, and chopped cilantro. Dinner is served! 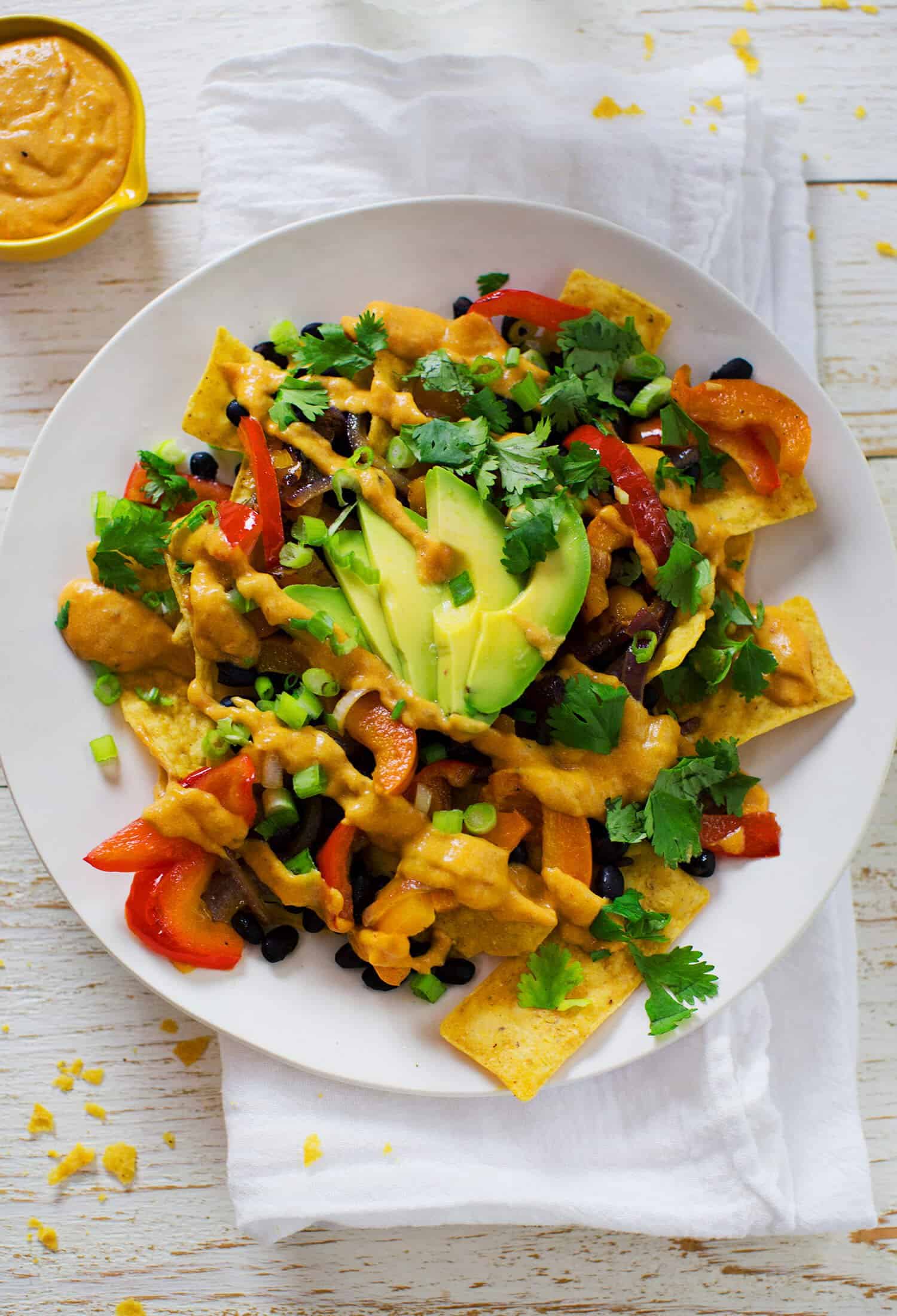 Notes: For the chips here, I like use something that’s 100% corn or whole grain and organic (or at least non-GMO). But another great option is to swap out the chips for brown rice. Then you have kind of a veggie burrito bowl situation—yum!

– Start with one chipotle pepper (in adobo sauce) but feel free to taste and add more to the cheese if you like. Whenever I’m cooking something with spice/heat, I like to start small and add more as I go, because if you make something too spicy for you it’s pretty much impossible to go back. So just start with one, but I’m sure some of you will want more.

– You could absolutely change up what vegetables go into this dish. To me, onions and peppers just feel right for nachos, but any vegetable the sounds good to you covered in nacho cheese is a go here. 🙂 Experiment with what may be in season or what you have in your refrigerator that you need to use up. There’s lots of possibilities here.

– This will make plenty of nacho cheese for two servings, and you may have some left over. If you do, you can totally save it in an airtight container for at least three days in your refrigerator (probably longer, but that’s how long I’ve done it so far with good results). When you reheat it, if it seems too thick just thin it out with water again. I’ve found that when I reheat this cheese, it seems a little too thick at first, but it’s a super easy solve.

– I suspect that you could swap out the potatoes for a similar weight in tofu for the nacho cheese. I haven’t tried it yet, but I just have a feeling it would work well. You’d need to warm it after blending since the heat from the cooked potatoes wouldn’t be a part of it anymore. But yeah, just options in case anyone is like, “I hate potatoes” or something.

Now if you’ll excuse me, I’m gonna dim the lights and put on a movie because I’ve got some nachos to DEVOUR IN THE DARK LIKE A PSYCHO. 🙂 xo. Emma