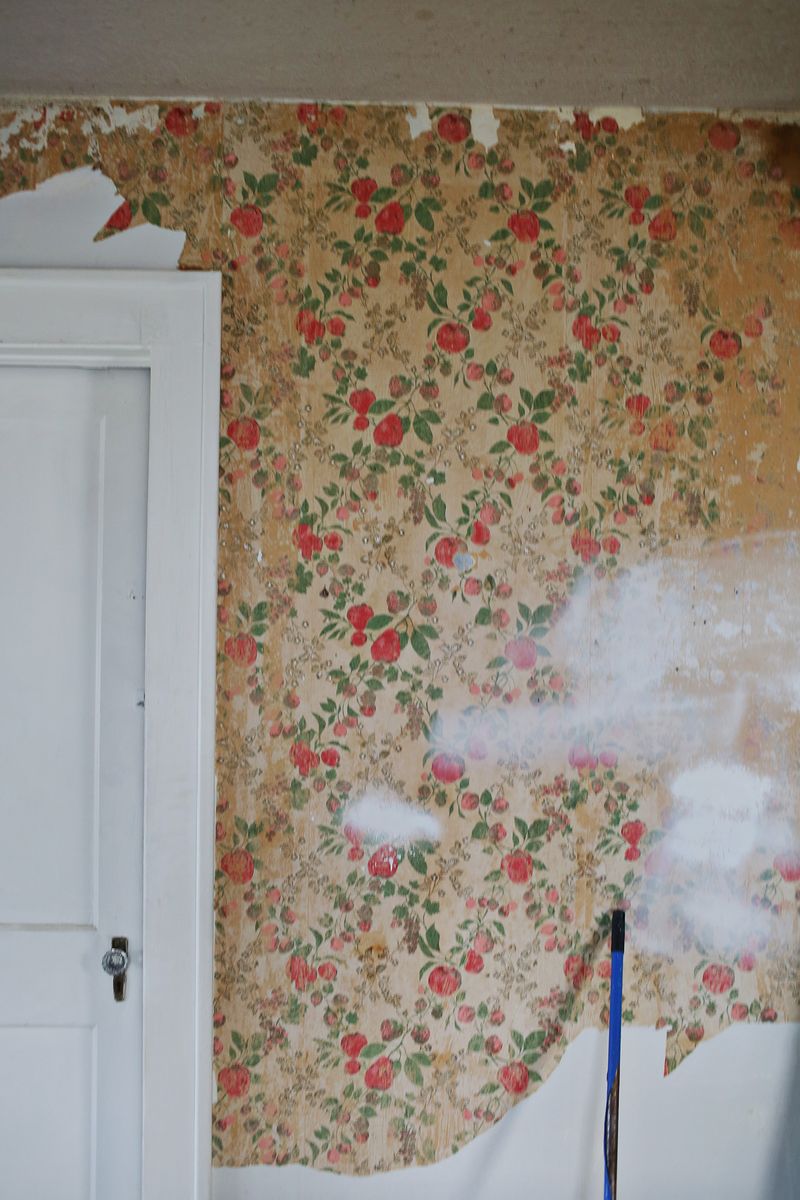 Just wanted to give you all an update on what progress is currently being made on our project house. In case you missed our last post on this, ABM has purchased a small house we'll be renovating and updating (and sharing all that content on the blog) and then donating to HFHS. We're excited to have new spaces to share with you all, and we're excited to give back to our community in the process.

Now one thing about buying a house in this kind of condition is… well… there's a LOT of work to do. Not only do we want to make the house look pretty (a.k.a. the fun part!), but we also want to increase the value of the property and, above all, make sure the structure is a safe place to live.

Many of you were curious about how much this house cost. Well, I'm gonna tell you. But first, I should warn many of you that the housing market here in Springfield, MO is pretty awesome, in my opinion. Housing costs in our hometown are pretty low as far as the national average goes.

The project house is 884 sq ft (2 bedrooms, 1 bathroom) and was purchased at $37,500. The house was built in 1921. We had the house inspected before we purchased so we could be aware of any major concerns (I think it's ALWAYS worth it to get an inspection, and in some states/counties it is required by law). Although even with a good inspection, sometimes old houses have surprises in store.

Our first step after purchasing the house was to figure out every big renovation that we wanted to do. We made of list of "needs done" and "would be nice to get done" before pursuing a quote. We have a local contractor we work with when we have updates that are too big for us to DIY. As you know, here at ABM we LOVE to do it ourselves. But sometimes we don't have the knowledge, skill set, or proper supplies to do everything ourselves. We are learning more and more all the time, but for us not everything could be safely DIY-ed. Sometimes you just need a professional.

So, before I show you the quotes, let's talk overall budget. This house is in a neighborhood where no matter what updates we make it would be difficult to resell the house for $60K or more. There just aren't very many houses in the neighborhood that could be sold for more than this. So, even though we won't be flipping the house (we're donating), it wouldn't make sense for us to invest more than this amount. And with the size of the house (square footage, number of bedrooms, lot size, etc.) it would probably be wise if we kept the entire investment to $55K or less (for anything that could not be removed from the house), as anything above this just wouldn't be realistic for the market value.

We have lots of DIY projects planned for the house already. So this let me know that we could only afford to spend $10K on any of the big renovations we wanted done by our contractor. If we kept that work to around $10K, then we'd still have some wiggle room for all the things we want to do for you guys on the blog. We talked him through our entire list, both the needs and the nice-to-haves, and waited to hear back on the quote… 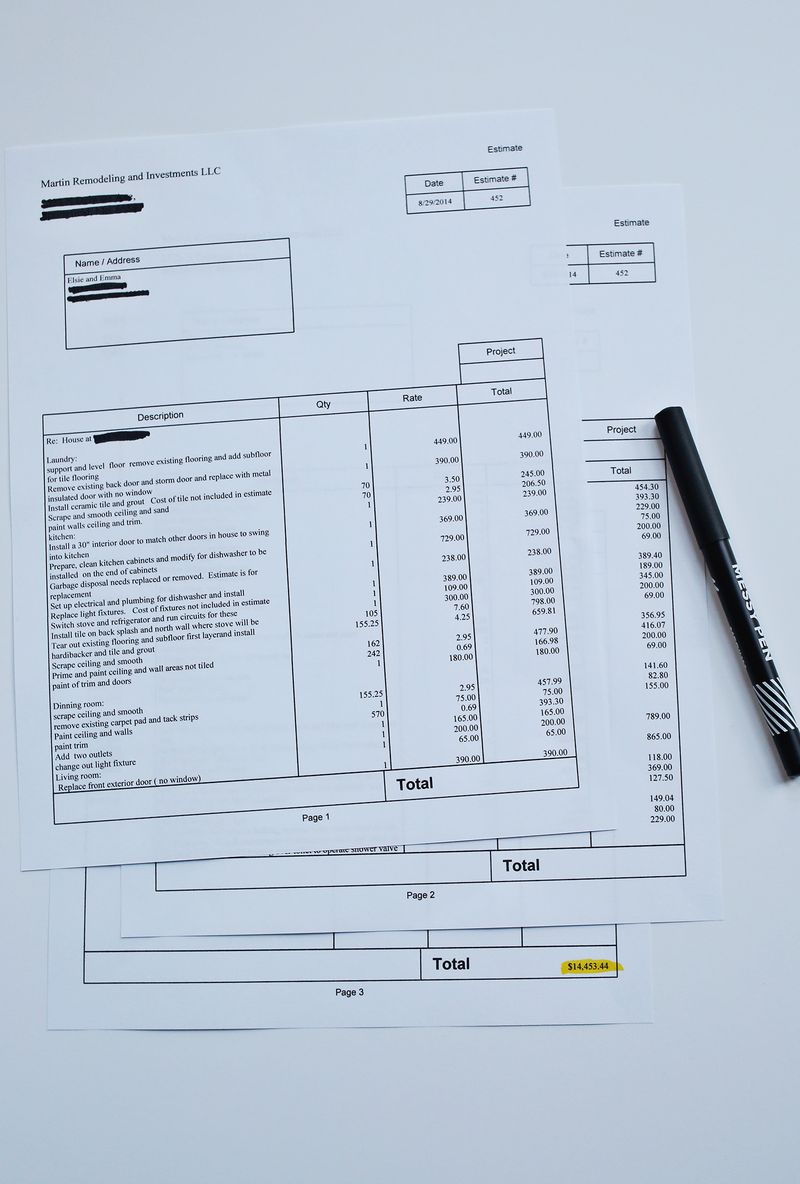 As you can see (or click to enlarge the image if you need), the initial quote came back at $14,453.44. And that didn't include any paint, tile, hardware, etc.

Bummer. That was already almost $5K over our budget even without the additional supply costs.

Now, like I said, we had included all of our nice-to-have items as well. So these were the first things we considered. Some things we scaled back included the following: we decided to paint the entire house ourselves; we skipped scraping the ceilings, even though we prefer the smooth look to the existing popcorn ceilings; and we decided we could learn to tile the laundry room floor ourselves. We had planned to tile one wall in the kitchen for aesthetic purposes (it's also easy to clean), but we needed to cut that as well.

The good news is that we didn't need to cut any of the needs on our list. We went back to our contractor and explained the changes we needed and the work we were willing to do ourselves, and we got a new quote… 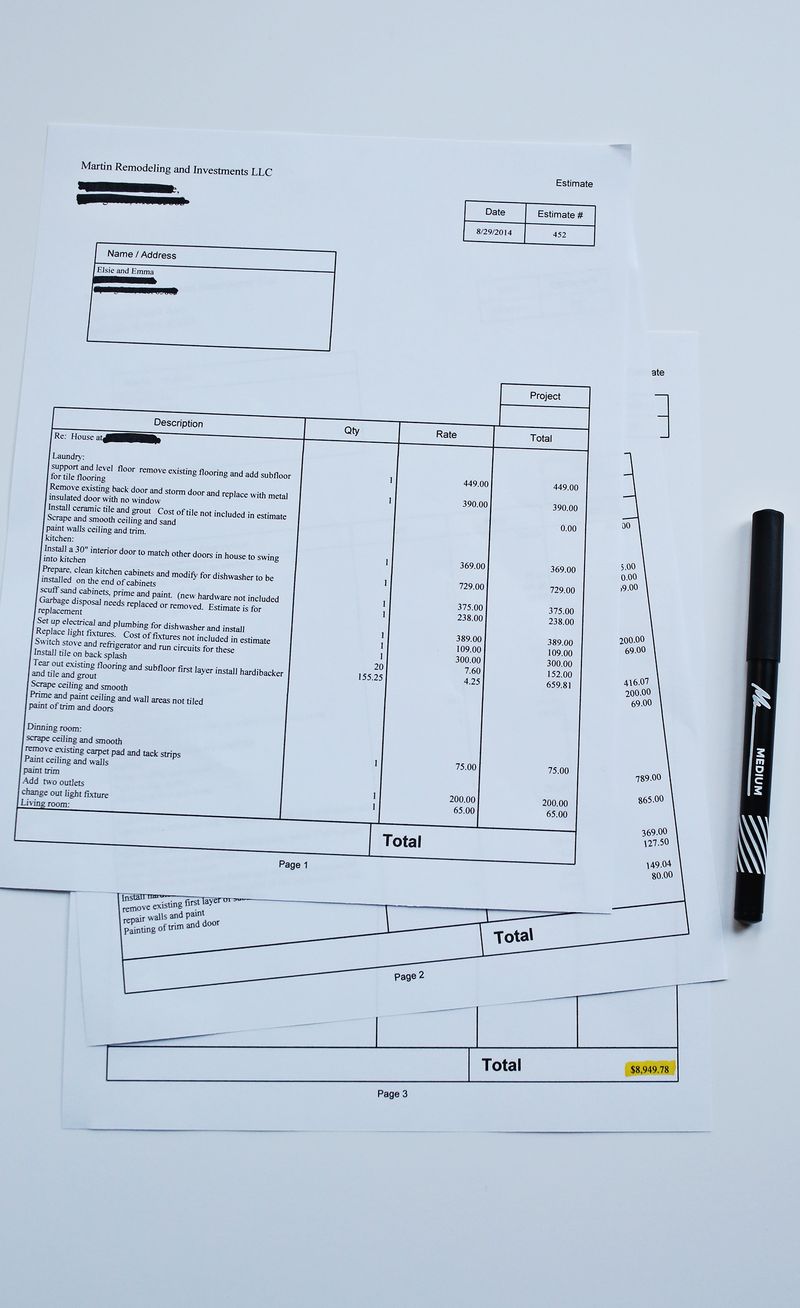 We were able to get the quote down to $8,949.78. This still didn't include the cost of paint, some tile (we're still adding tile to the bathroom), and a few other items. But this still meant we'd be just below $10K. Perfect!

With the quote worked out, it was time for work to start! Here are some images of the progress that has been made so far. 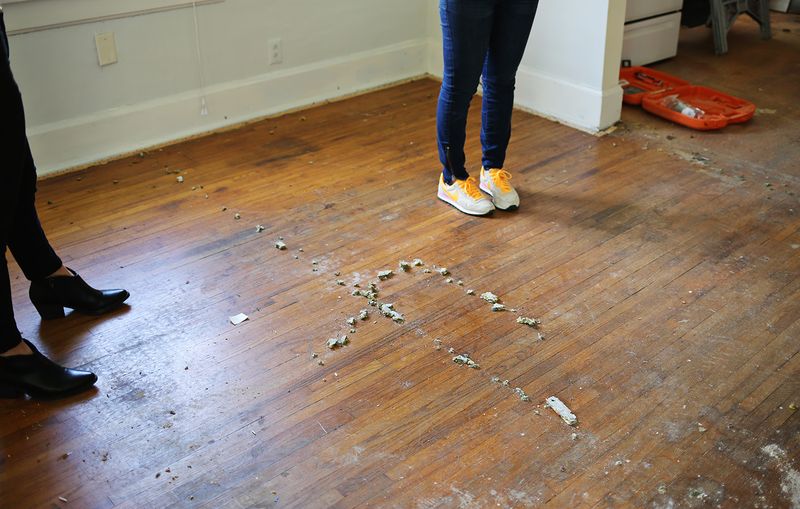 The carpets have been removed and the house already smells SO much better. We'll have to finish fixing up these old wood floors—but with a little work they're going to look beautiful, we can already tell! 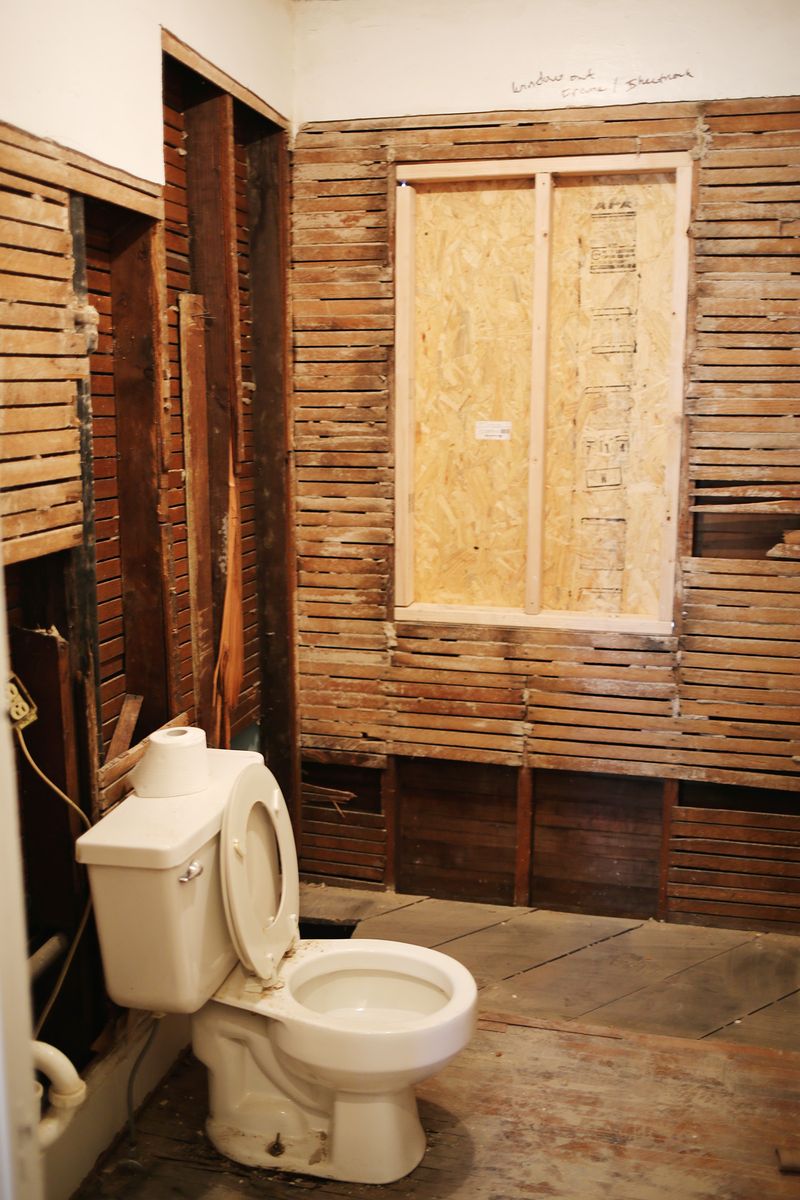 The bathroom needed a lot of work. It's going to be much more functional and fresh feeling when we're all done.

One update we ultimately decided to include that was sort of a bummer is we are removing the only window in the room. The window was built low and in the shower space. It already showed signs of pretty serious water damage, and our contractor recommended that we remove it, as it would probably continue to be a problem even if we repaired the current damage. Just not an ideal place for a window. We love natural light, so this was a bummer to learn about, but ultimately we don't want an ongoing water damage issue in the bathroom, so it seemed to be the best and most affordable option. If you'd like to know more about this, let us know in the comments and we can blog more about it in upcoming update posts. 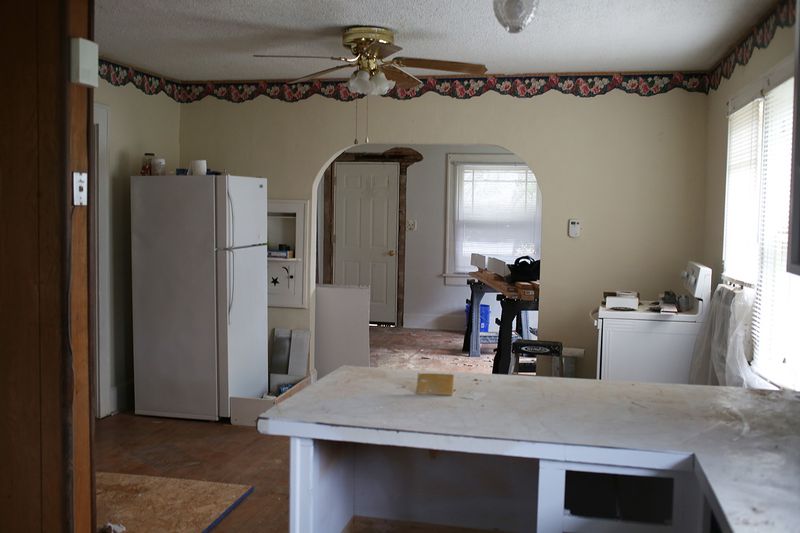 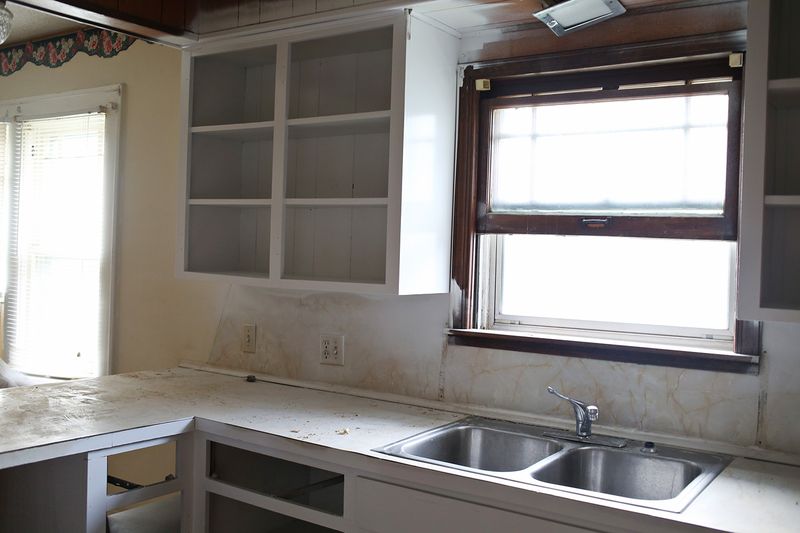 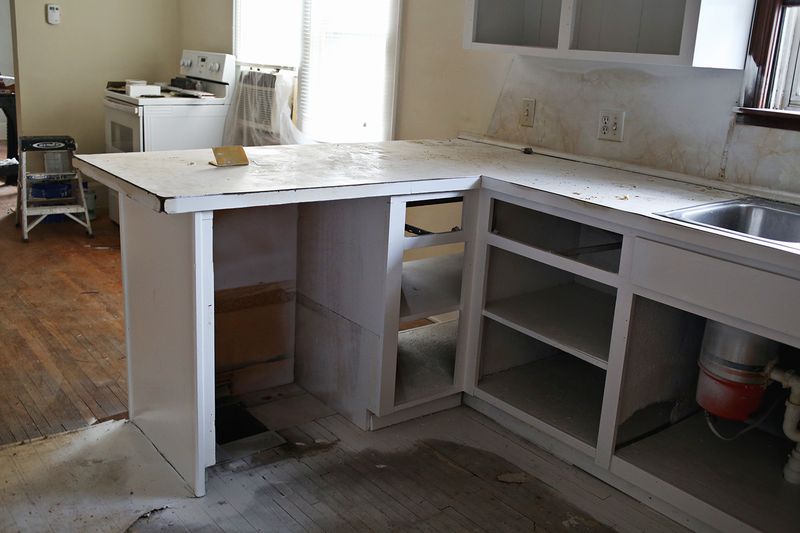 Lots of changes happening in the kitchen already. We plan to update the counters ourselves, but I did want to point out one thing to you all. See that space in the above picture? You know, that dishwasher-sized space? 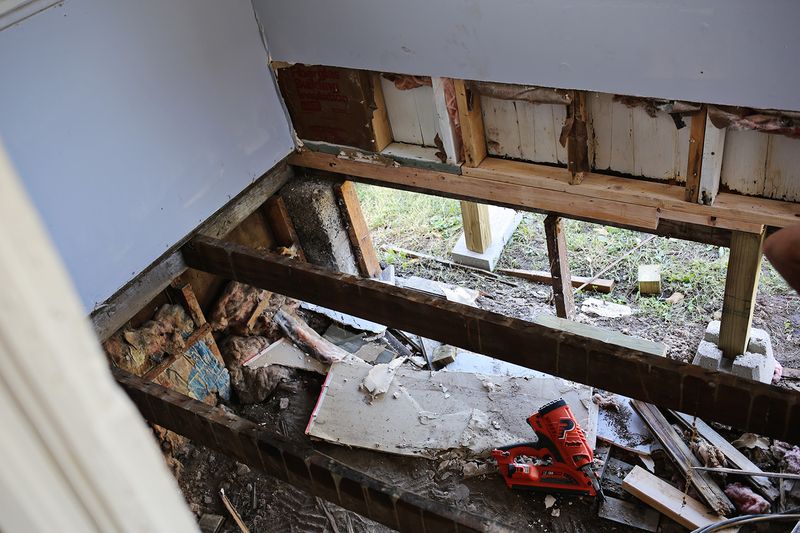 I feel like any house near 100 years old is bound to have at least a few surprises in store. Sometimes good (like those soon-to-be-beautiful wood floors) and sometimes bad. This was our bad news that didn't show up in the house inspection.

Even though we decided to tile the laundry room floor ourselves, we still needed the subflooring updated, as it was super uneven, and we were concerned about what that meant about the structure. Our contractor and his team got to work on that room, updating the subfloor and the back door (it was in serious need of repair!), and they found that the floor was extremely rotted. Like, one of the men working in the room at one point stepped on an area of the floor, and his foot went through the floor! (He's okay—it was just scary.) This meant the rotted wood needed to get removed, the foundation needed to be updated (this was an add-on to the original house, and the foundation was not properly done, which caused the moisture and eventual rotting wood), and then the new subflooring needed to be put in. So this is going to add cost to the overall project. Bummer—but necessary. 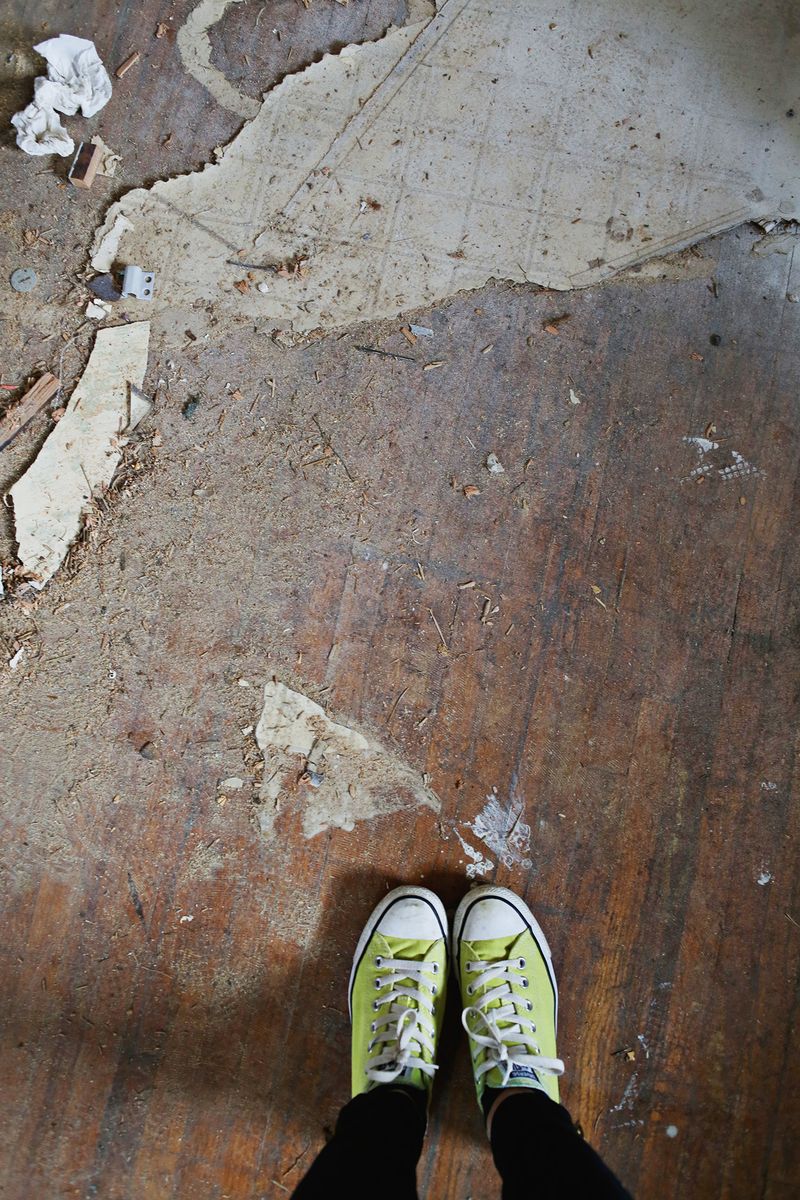 But then we got some good news. We had planned to tile the kitchen floor, as the linoleum in there was already peeling up in places. Our contractor removed the linoleum and found wood floors in great condition (similar to the living room). He suggested we skip tiling the kitchen floor to save costs, since we had that surprise rotting in the laundry room that we had to repair. I thought this was a great suggestion! I like tile in a kitchen, as sometimes spills happen, and it's easier to clean up with tile, but it's not necessary.

We'll still have some work to do on the wood floors in the kitchen, but no big deal as we already have that to do in the dining room and living room already. 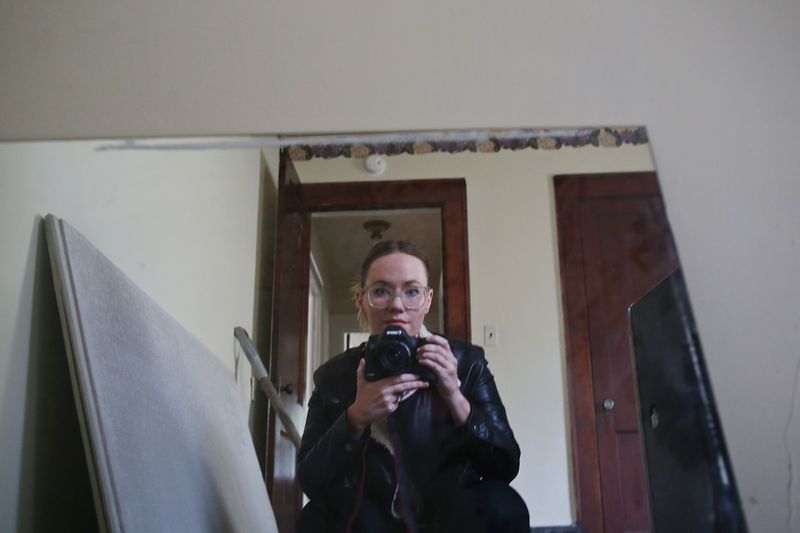 Bathroom-mirror-in-the-bedroom-blurry-selfie—why not? And yes, I'm a total dweeb! But you've gotta have some fun with all this! So, that's a little more information about our overall budget goals with this project, as well as some peeks at where we are currently with the big updates. Of course, this doesn't cover EVERYTHING, so if you have any questions, let us know in the comments, and hopefully we'll have an answer or can address it in a later post. And I have a feeling we arent' out of the woods yet with the big renovations. Old houses tend to be full of surprises so we'll keep you updated on this fun and beautiful part of the process. 🙂

We're SO excited you are all on board with the project house with us. It's exciting! xo. Emma and the ABM team.

Credits // Author and Photography: Emma Chapman. Photos edited with A Beautiful Mess actions or sometimes not edited at all. 🙂