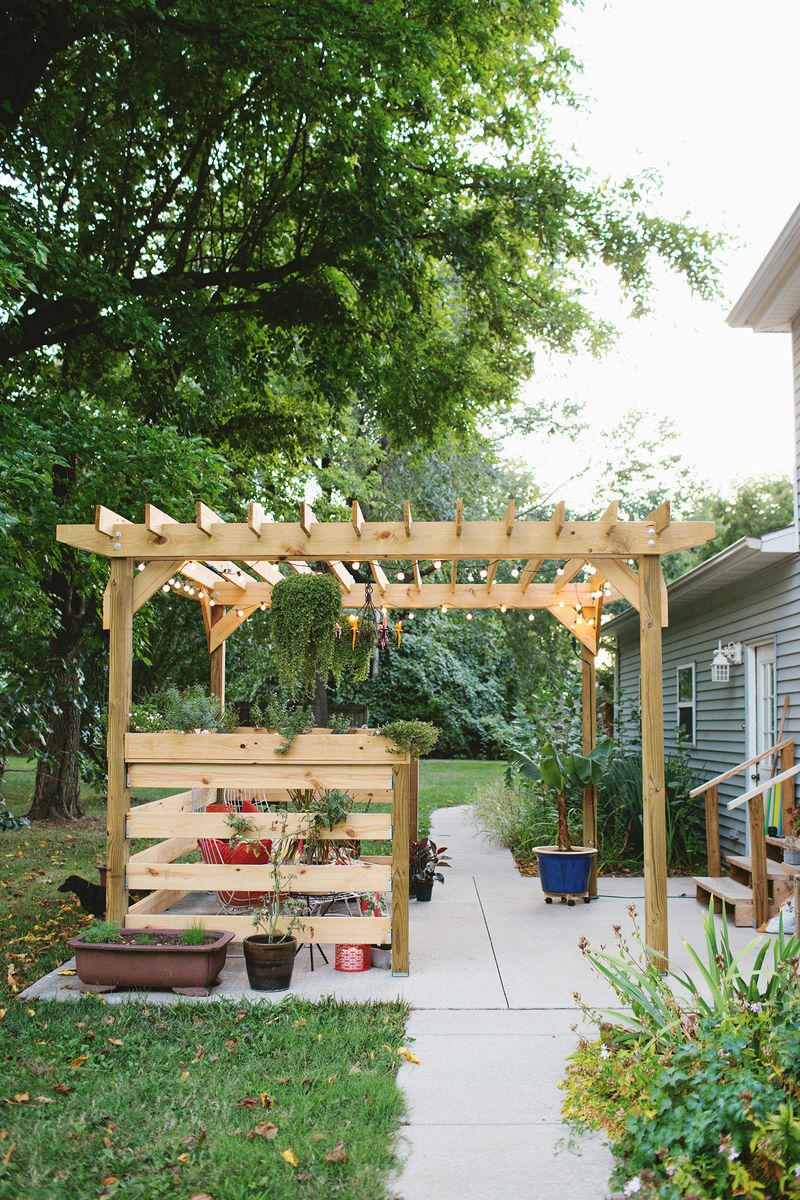 Yesterday I shared a bit about how I planned for my pergola build. Today I’m going to share with you the build process! It took two days to build. I initially thought I could build the thing by myself, but when I was buying all the lumber and supplies, I started to reconsider. It was definitely going to be a bigger task than I had imagined, so I recruited a buddy to help me on the first day. Thanks, Kyle! On the second day, I was able to finish the build on my own. If you like working by yourself, like I usually do, I would definitely recommend asking a buddy or two to help out (plus having an extra pair of eyes on a project can minimize stupid mistakes). As I mentioned in the previous post, the pergola ended up being 10′ x 10′, built on an existing concrete slab. Here’s how I went about constructing it: 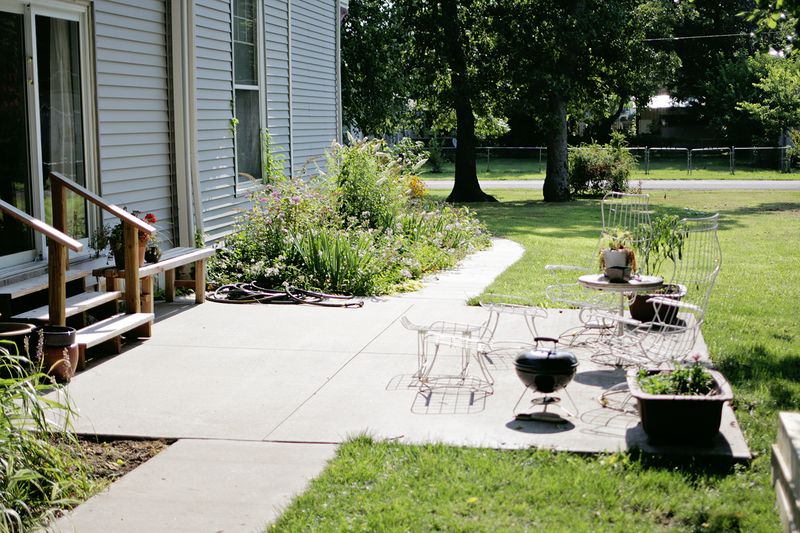 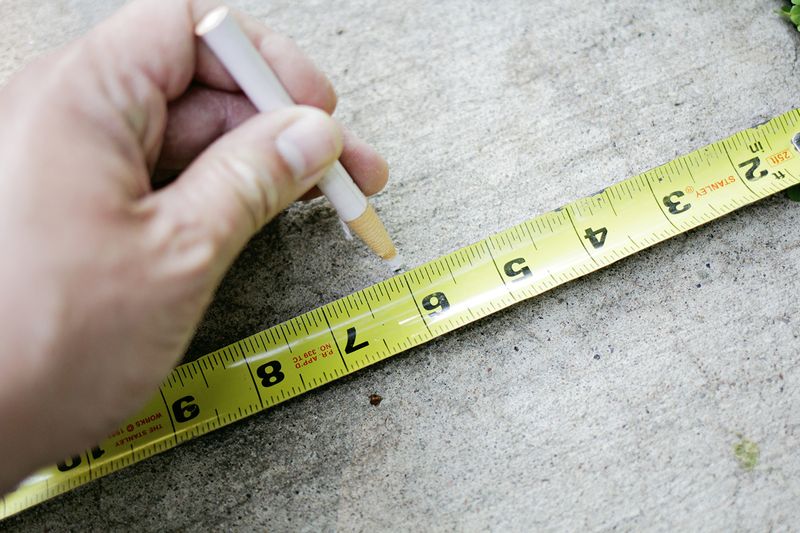 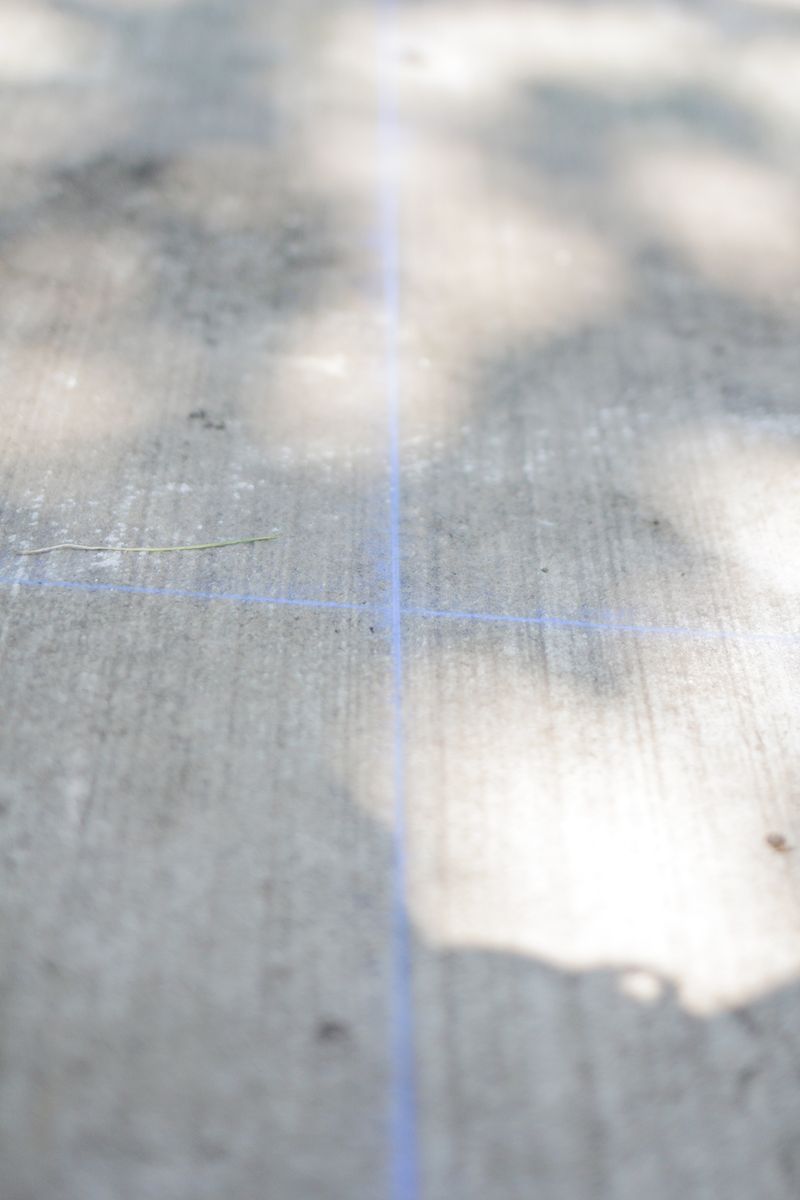 Step One: Fortunately, I had a perfect slab of concrete to build on. The first thing I did was clear all of the furniture and planters off, then using a leaf blower, blew all the leaves and dirt away. I had a nice, level, clean surface to build on. The slab is 16′ x 16′, so I thought I would just build it in the center, leaving a 3′ walkway all around it. After measuring and considering entryways (side garage door and kitchen glass sliding door), I repositioned over and back a foot—which worked out pretty great. So after measuring and marking with a colored pencil on the concrete, I snapped lines with the chalk line. So far, so good. 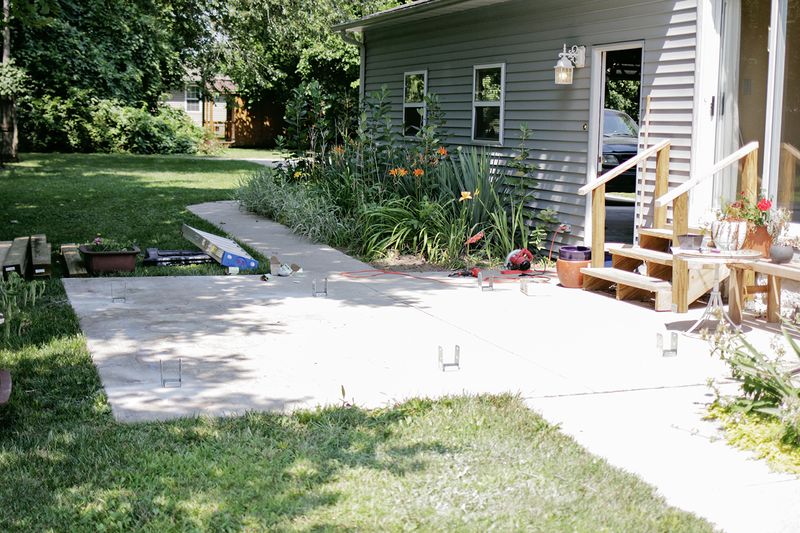 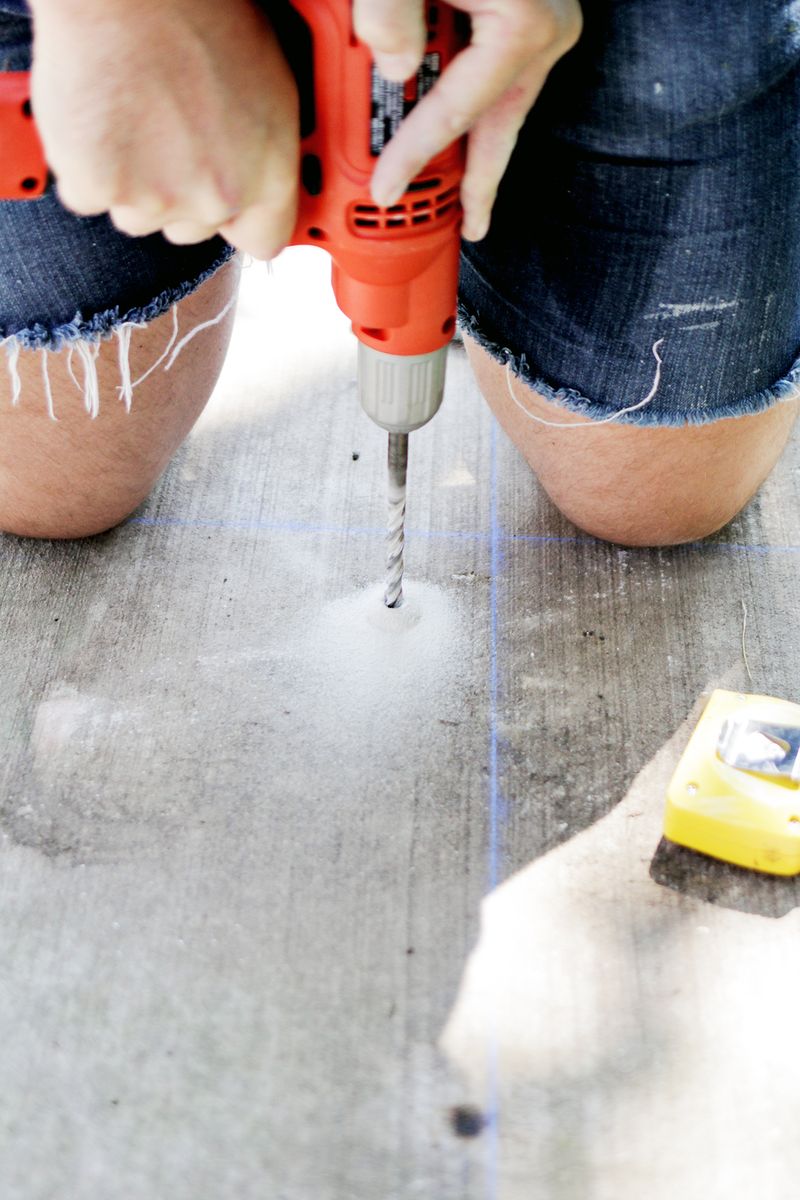 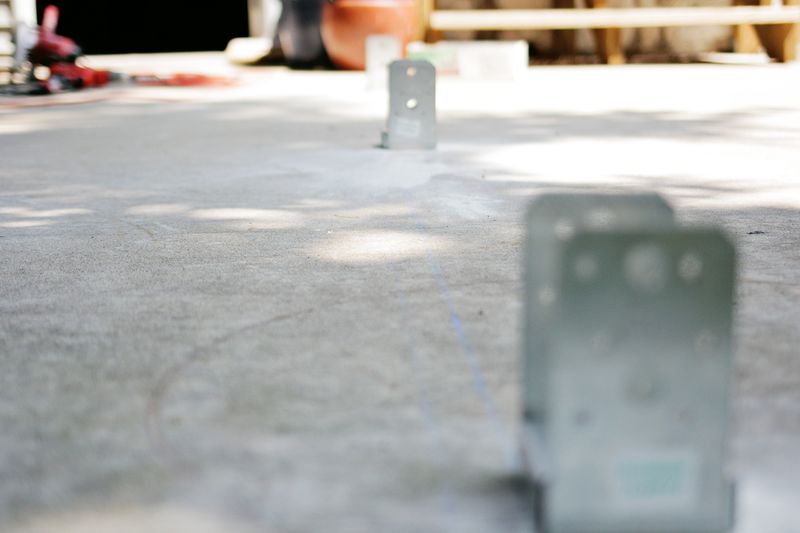 Step Two: It can get pretty windy here in the Midwest. Since I didn’t want to wake up one morning with a pergola smashed into my kitchen, I had to anchor it down. I used the heaviest duty post anchor I could find. They’re triple zinc coated and recommended to use with treated lumber. They also came with 1″ stand-off plates to elevate the lumber off the concrete for moisture control. I set out all of the plates, then went to each one, drilled a hole with a 3/8″ concrete bit, then ratcheted the anchor bolt in. 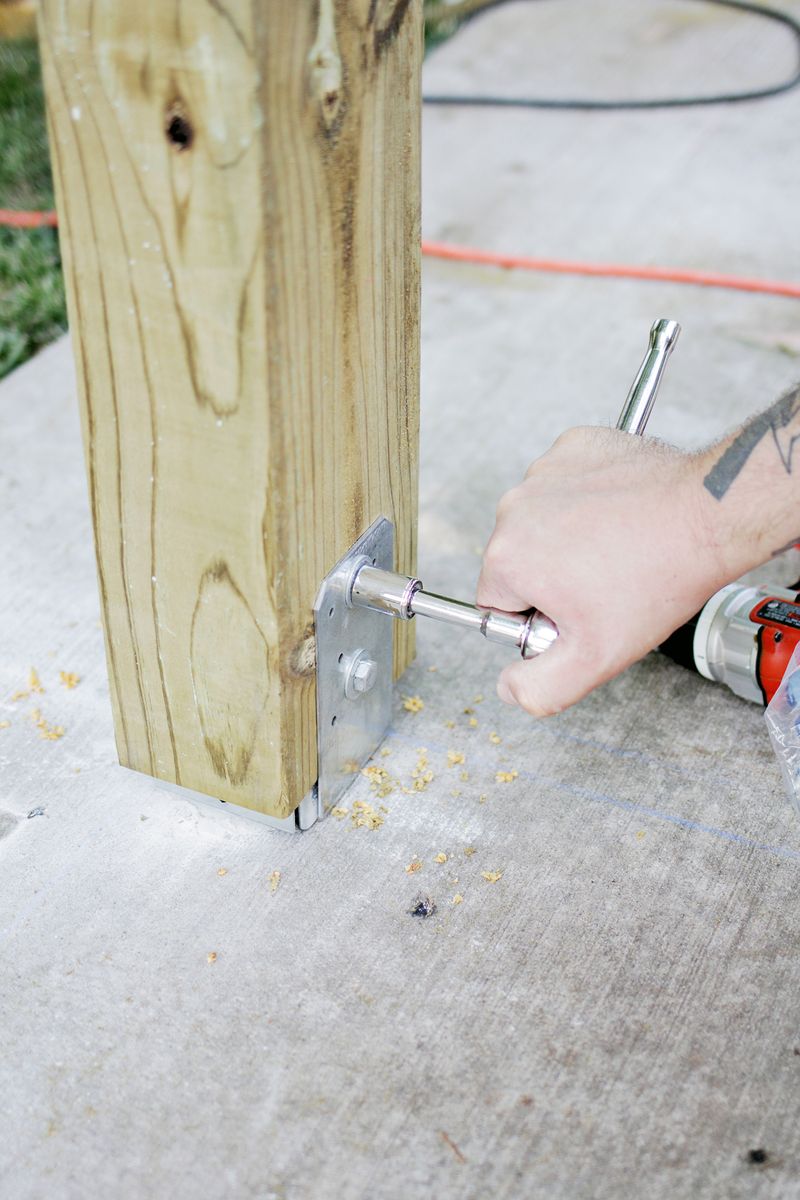 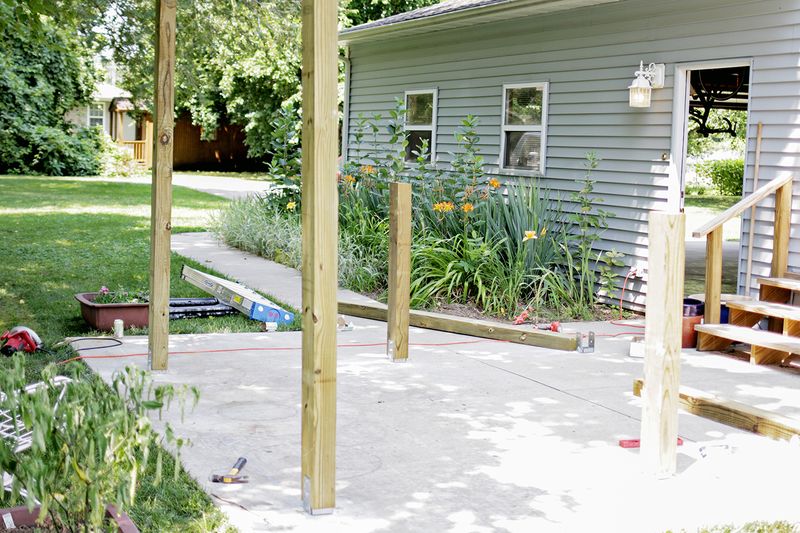 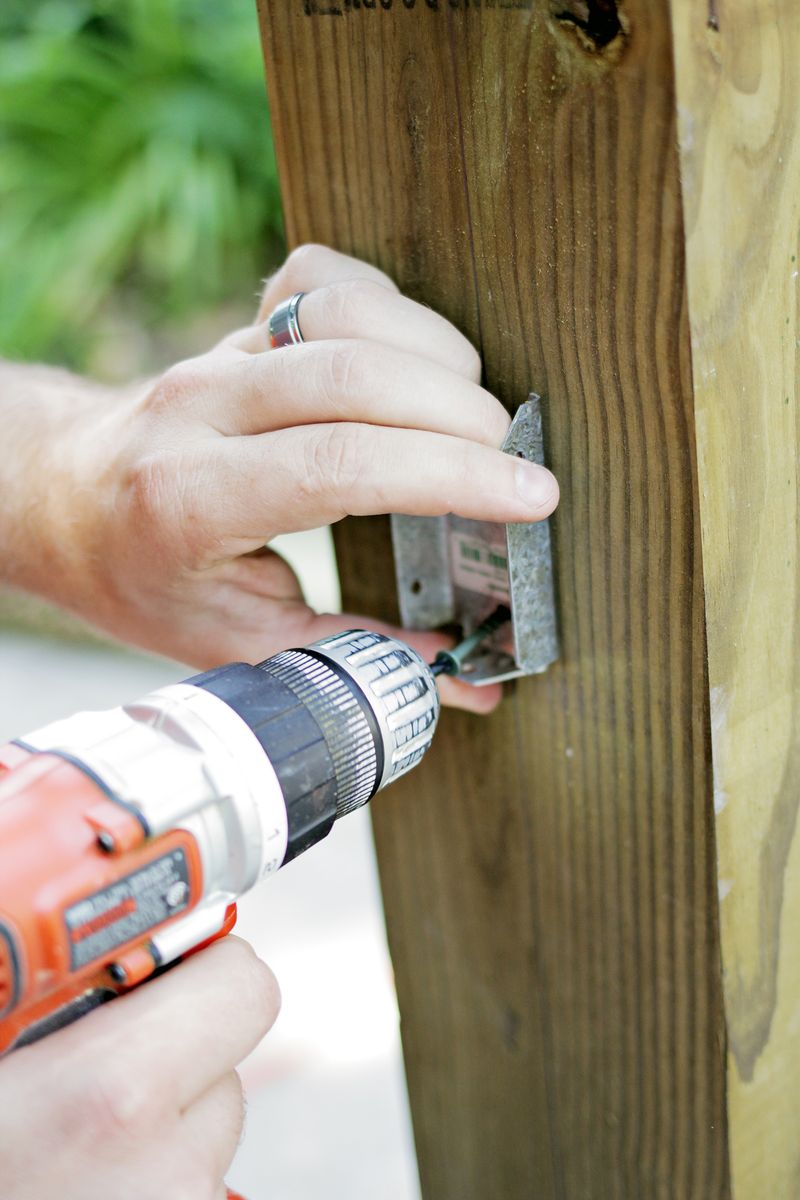 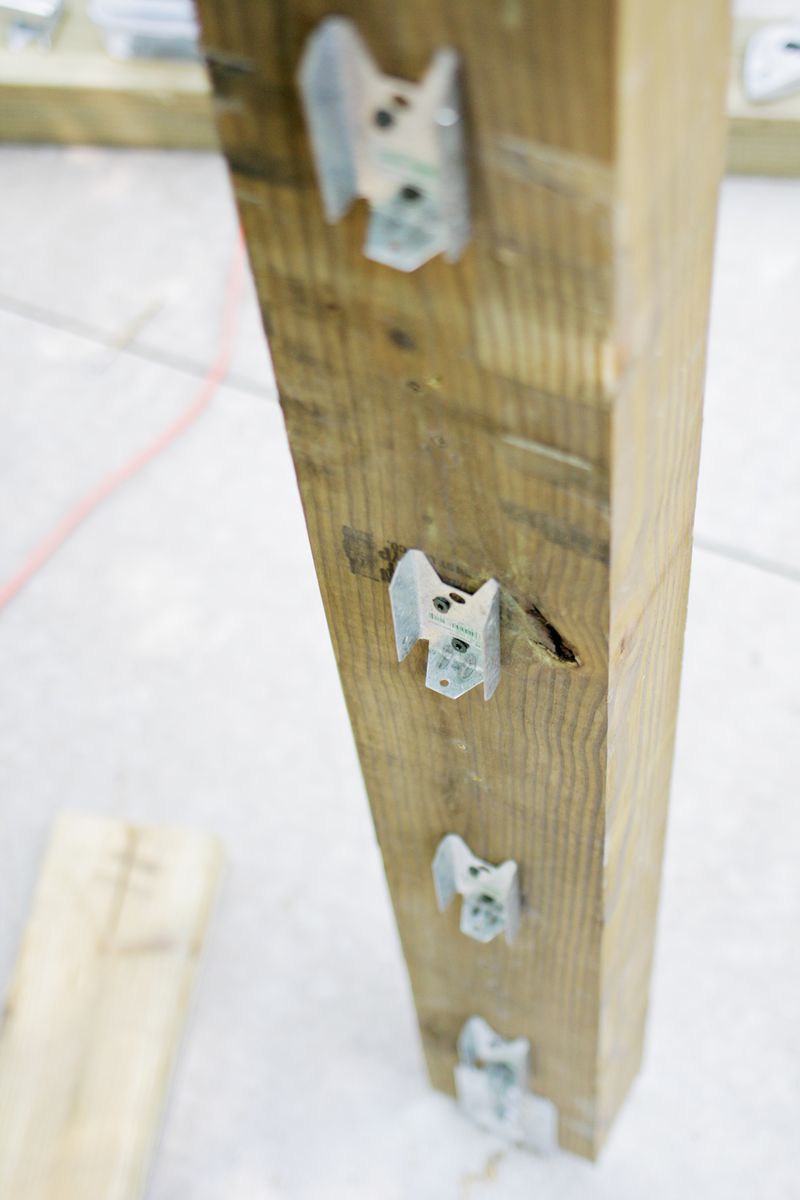 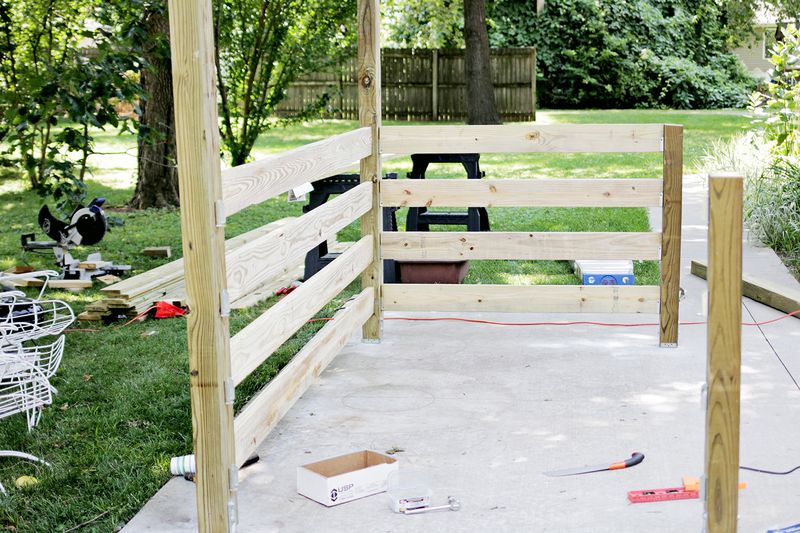 Step Three: After all of the base plates were installed, it was time to put up some lumber. The 4x6s I used were 8′ high, so that set my ceiling height. They weren’t exactly 8′, so I went ahead and cut them all to size. After putting up the first one, I got a bit nervous because it was kind of shaky (8′ of vertical lumber tends to do that). I decided to only put up the back two 8′ posts and two 4′ posts, my thought being by tying those four posts together with the horizontal boards, they would become sturdy. Then I could put up the two other eight-footers and then attach them all together. After I had the four posts up, it was time for the the privacy panels. We installed the fence brackets, cut the 1×6 pieces to size, and screwed them in place.

If I were to build the pergola again, I would probably do this step differently. The horizontal beams definitely made the structure sturdier, but not as much as I would have liked. The fence brackets do a fine job of holding the lumber in place, but they didn’t provide stability support (I’m sure there is an engineering term I could use here). The alternative could have been using different brackets or just screwing the beams onto the outside of the vertical beams. 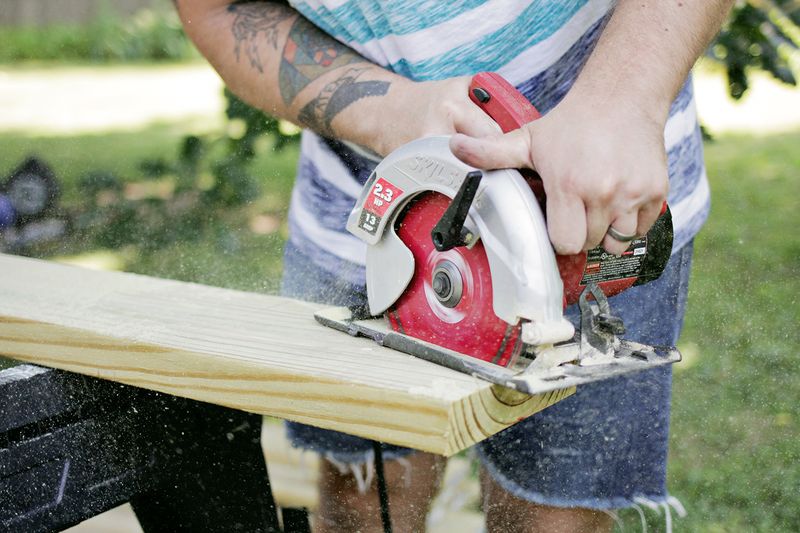 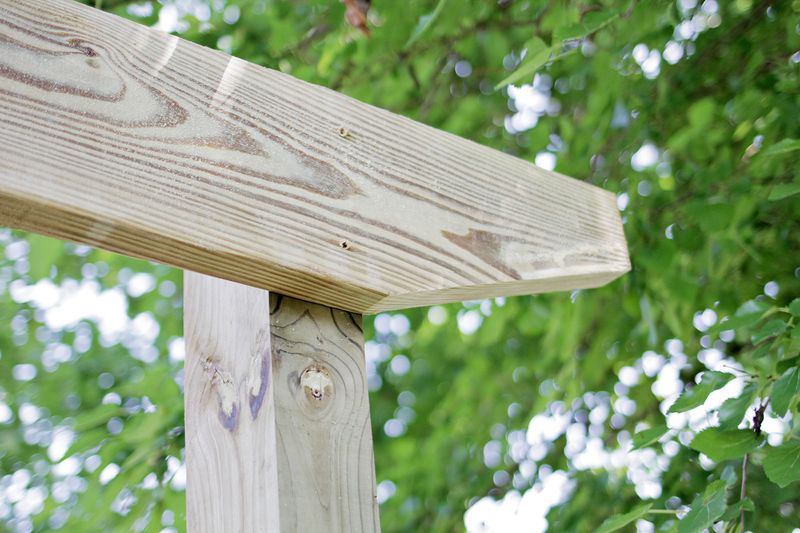 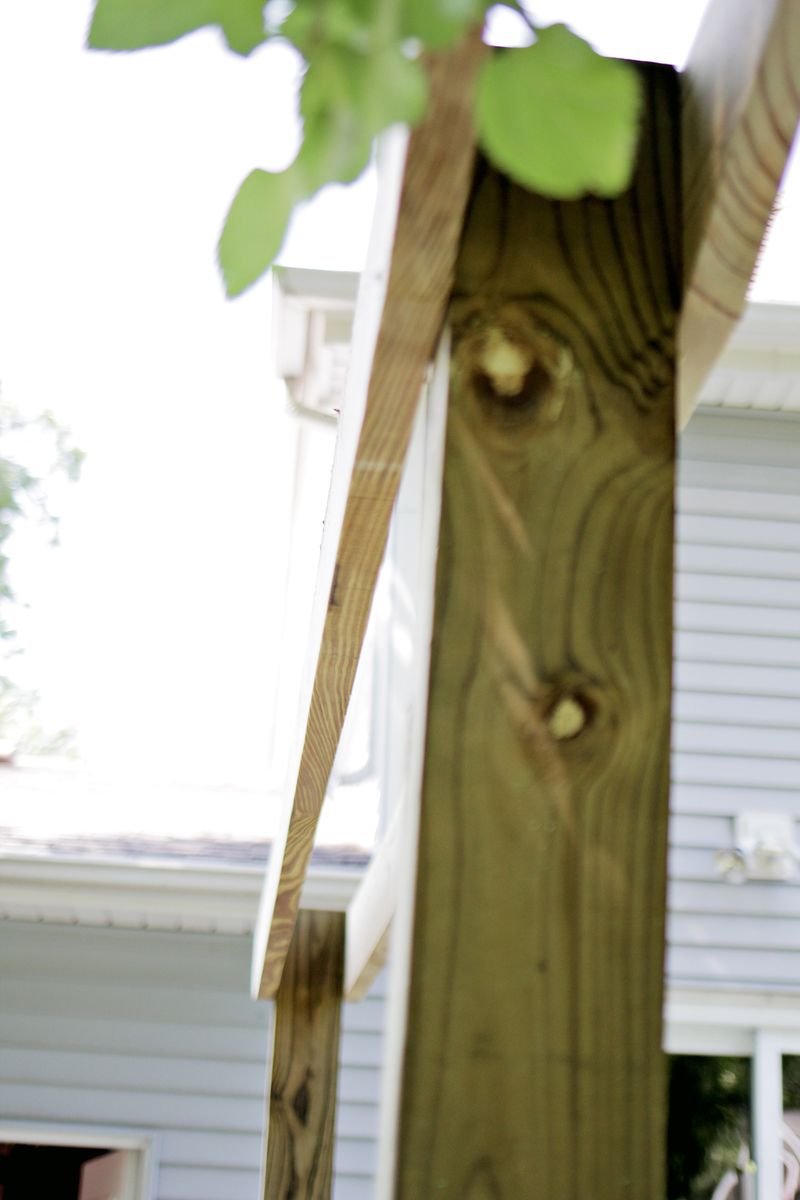 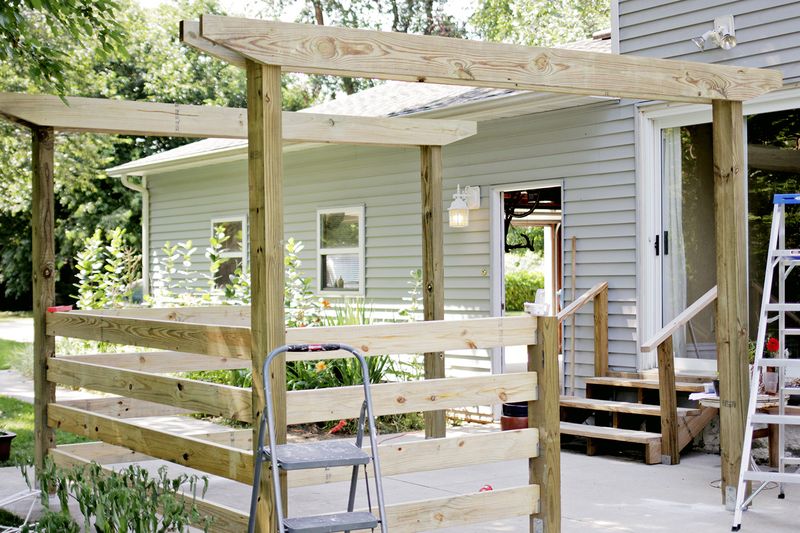 Step Four: At this step, having helping hands was crucial. I had all six vertical beams up and needed to install the 2x8s that would provide lateral support. First off, I cut the corners off to add a little bit of character. The 6″ lag bolts I had ordered hadn’t arrived yet, so I just screwed them in to temporarily keep them in place. I probably would have done that anyway so Kyle didn’t have to hold his side up while I ratcheted two big ol’ bolts in. That thing was not light; the faster I got it screwed in, the better. I marked the top of the lumber so I could easily line it up to the post and didn’t have to fuss too long. 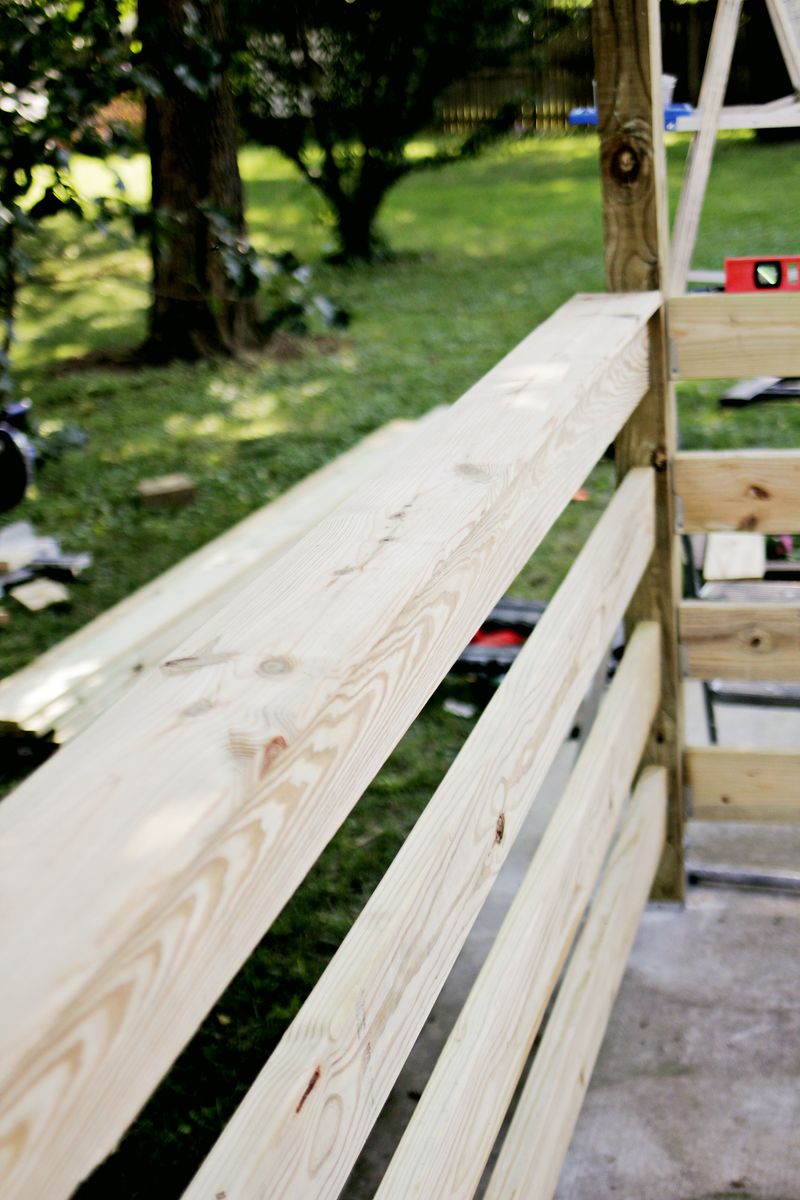 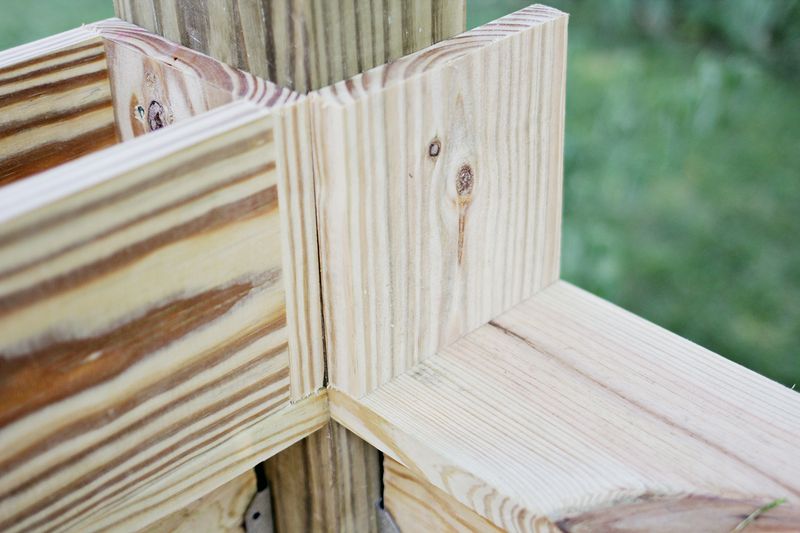 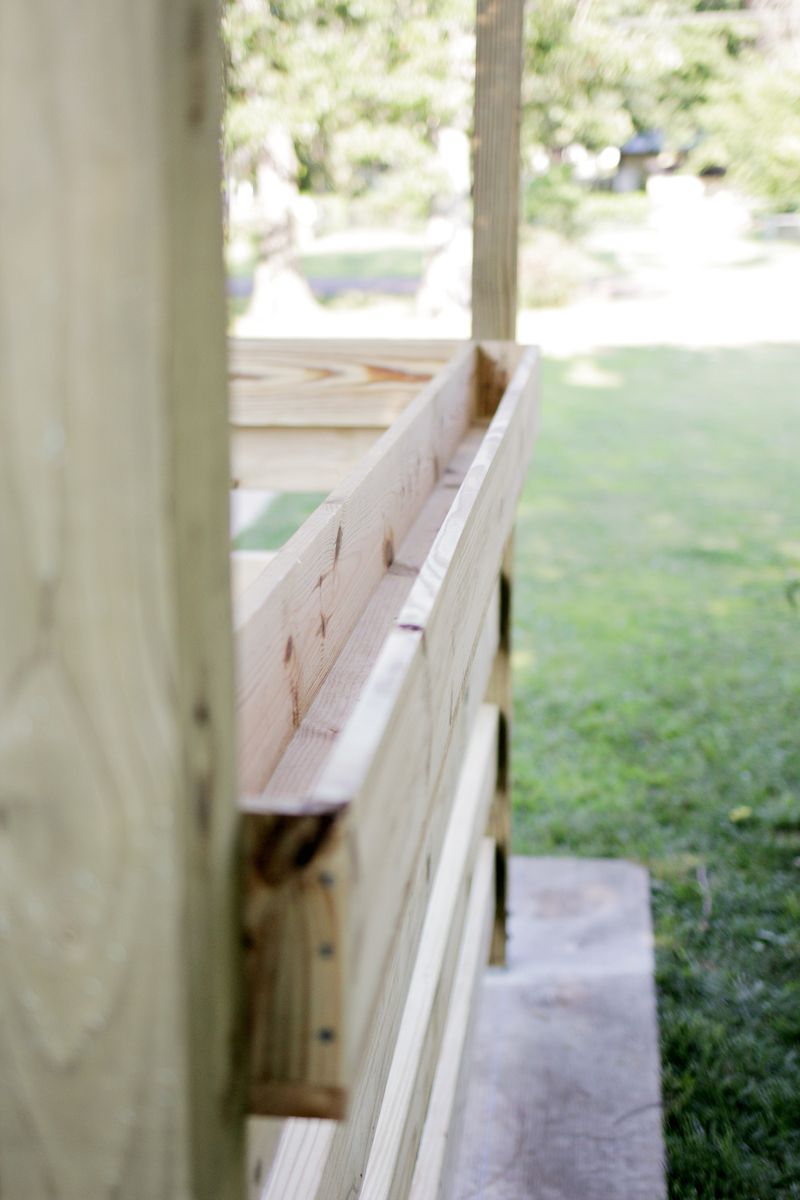 Step Five: This thing was starting to look like something! I wanted to reinforce the structure further before putting up the slats, so I decided to install the trough. It was basically a long box screwed to the top of the half walls. After the trough was put on, I cut a piece of wood to fit in the corner to brace even more. The structure was getting stronger by the minute! I also drilled some holes on the bottom of the trough for drainage. 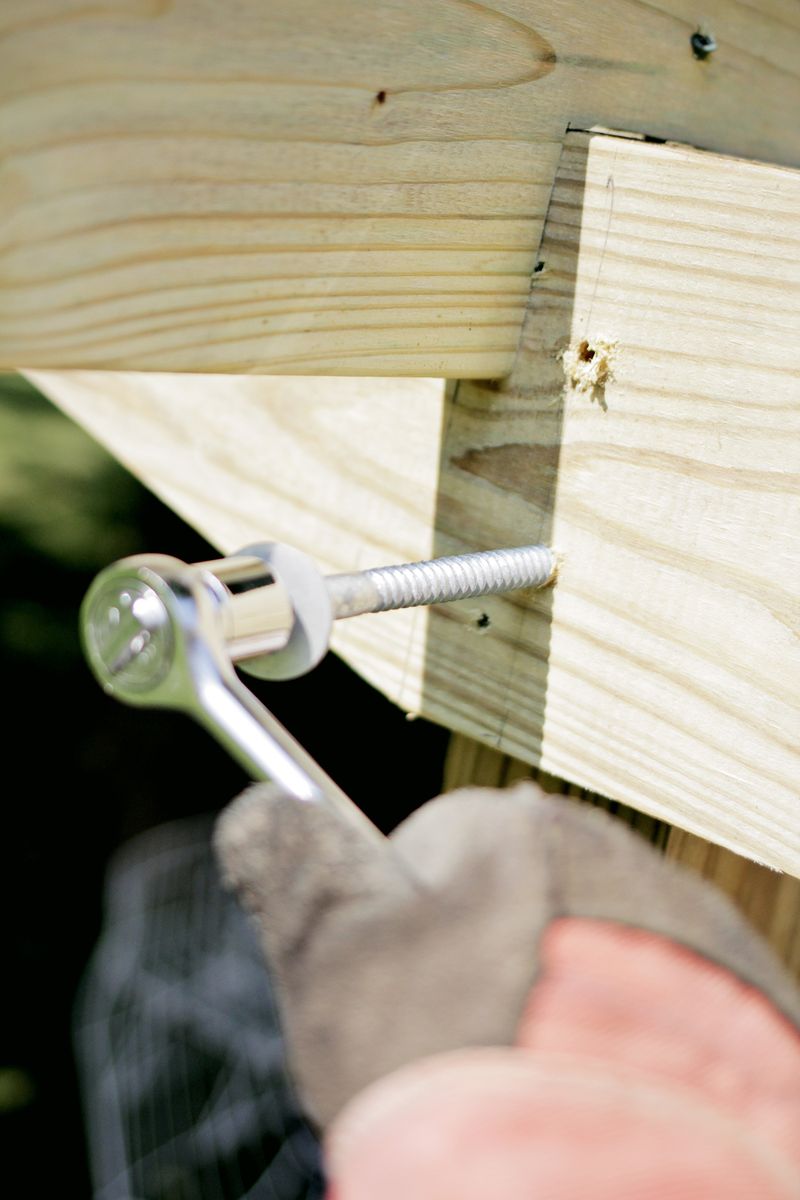 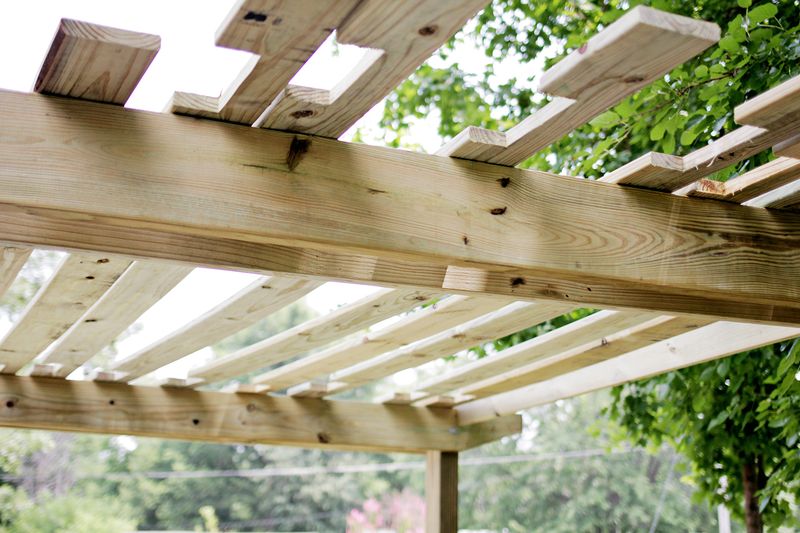 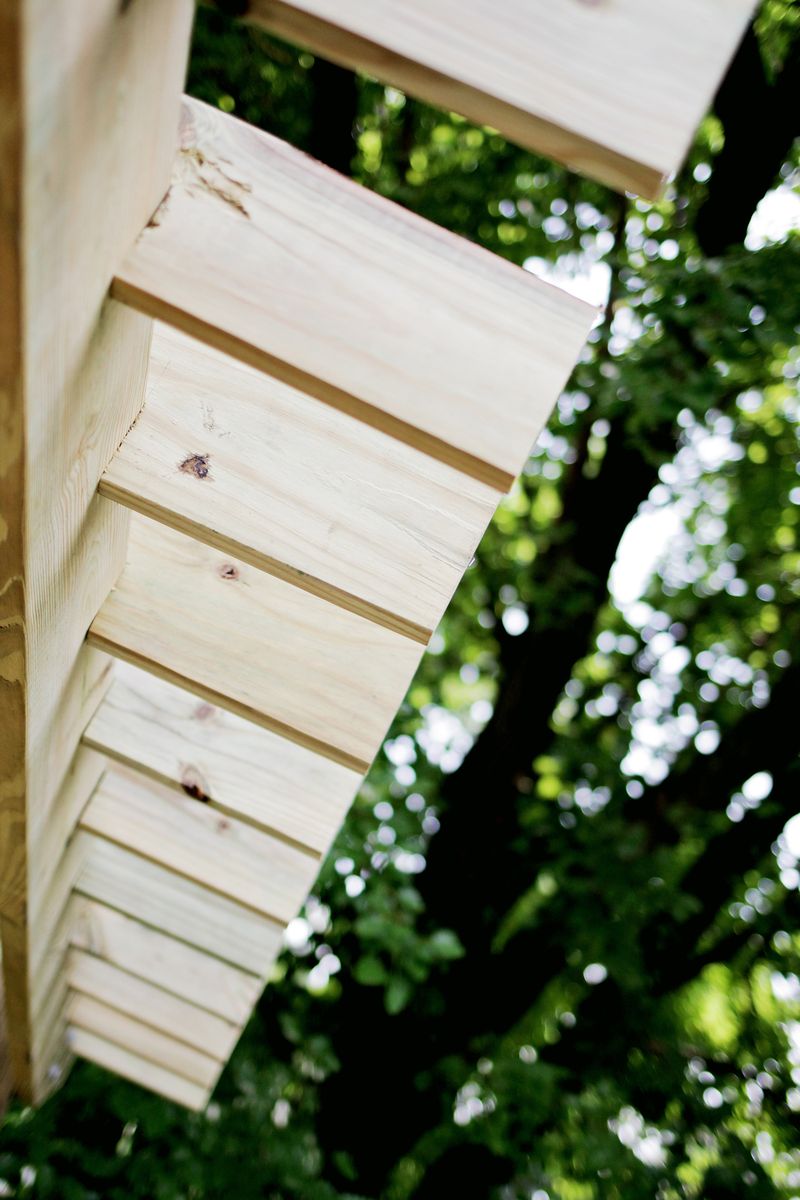 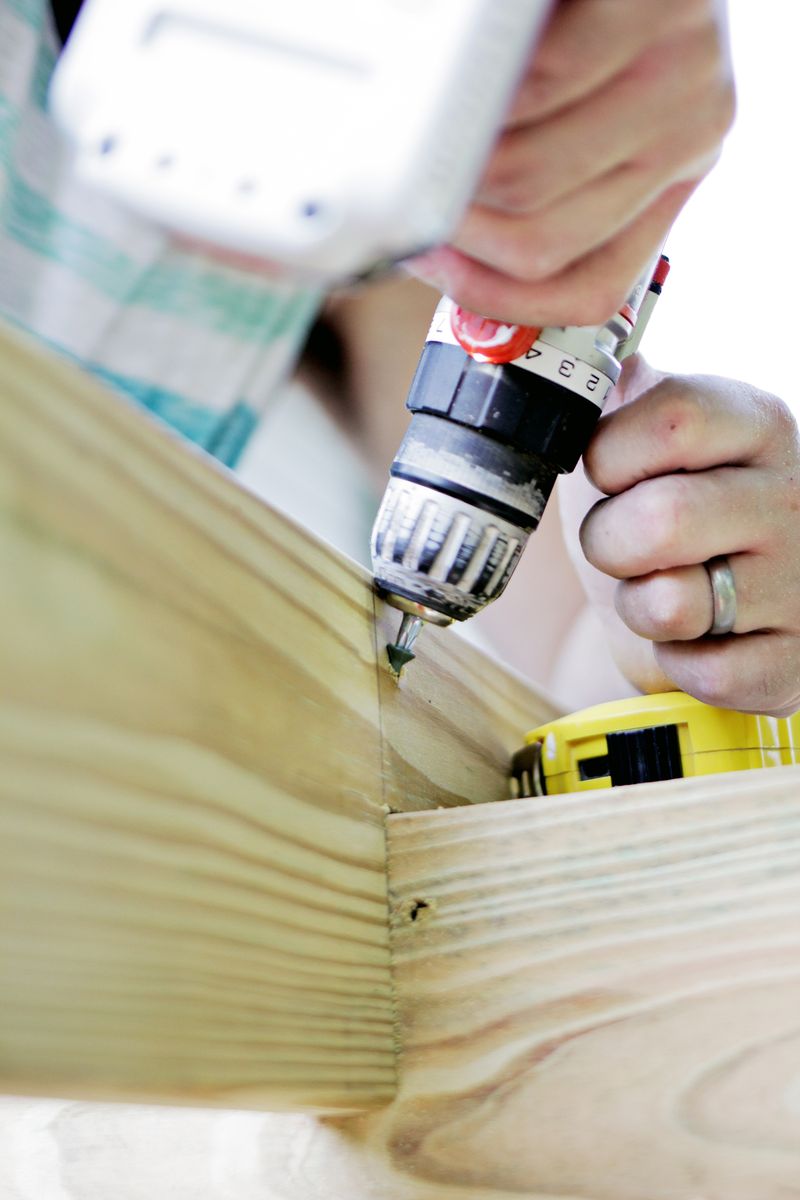 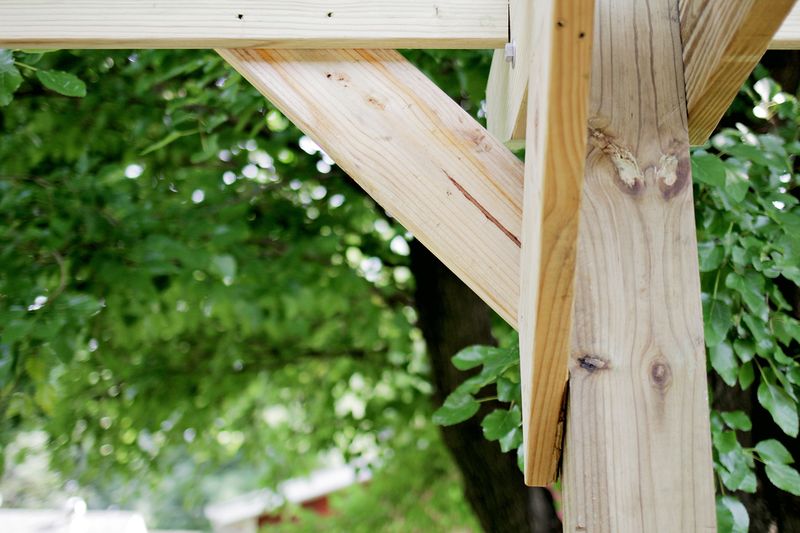 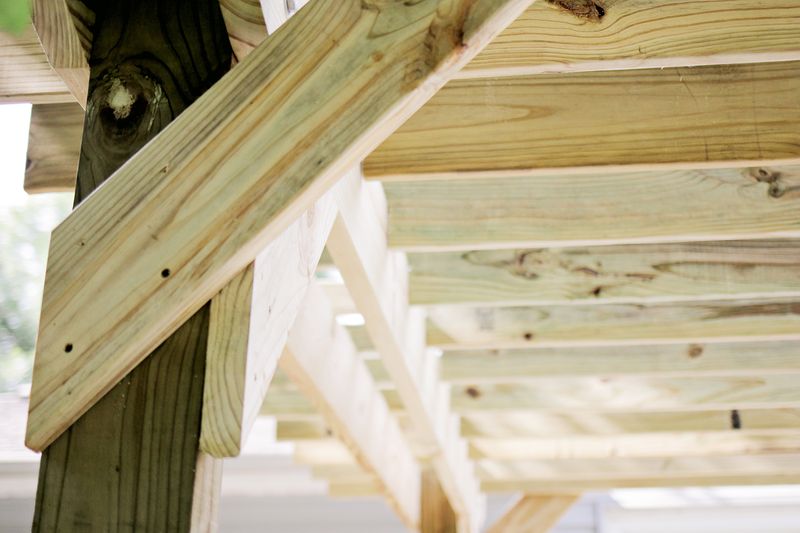 Step Six: At this point, things were really coming together. It was the next day, and I had received my bolts and washers, so I started by screwing those in. I put two on the outside of each end of the  horizontal 2x8s and one on each of the inside ones. Those guys did not go in easy; I probably could have gotten away with using little bit shorter ones. Even after pre-drilling holes, each one took around five minutes (seemed like 50), and I had 12 to do! I ended up putting on leather gloves, because blisters were inevitable. After I got all of the lag bolts in, and took a water break. I was ready to put up slats and last of the bracing. I used the 1×6 decking for the slats. After measuring and cutting out notches in each one, I threw them up onto the pergola. Math time. I had to figure out the spacing between each slat so they would be equidistant from each other. The slats were about 3/4″ wide, so I multiplied 12 by 3/4″, then subtracted that total from the overall length I was covering, then divided that by 12. Sound pretty straightforward? I would have eventually figured it out after an hour of scratching my head, but thankfully Kyle told me that trick (another good reason to have a helper). After I marked where each slat was going to be, I just started to position them and screw them in. Since the slats fit so snug over the cross beams, all I had to do was put a couple screws on each side to keep them in place.

The braces were the last to go on. I basically cut 45 degree angles on both sides of pieces of 2×6, then screwed the crap out of them to the structure.  I’m no professional, but I don’t think that thing is going anywhere soon.

That’s it. All I had left to do was plant and style, and that is going to be shared in the next post (ooooooh, cliff hanger). Leave any questions in the comment section; I’ll try to explain myself.

Yes they make ones that fit long planters, like liner pots but they can be hard to find. Honestly, I’d probably use some pond liner, staple it in, and then drill through the liner and the wood together for drainage holes. My hubby built me 2’x6′ planter boxes like that as a wedding present (we only have a concrete patio here in LA), and they’re still going strong at 3 years with nearly daily watering, no issues at all. Since you guys have a harsh winter coming where you don’t grow, maybe just let em dry out real well, then next year gut em and do that. Cuz I hate to be a bearer of bad news but I imagine it would probably keep getting worse if my past experience is any indication. Hope it turns out well though, good job as usual, you’re such a great addition to this blog with projects like this and your creativity and writing style?

I have been wanting to add a pergola to the backyard. Would you recommend this project for a beginner? My husband has built a fire place mantle and a floor to ceiling built in bookshelf.

It is wonderful to have a pergola in the yard, but it may take time and effort to build that.

Really added a nice look to your space. We have one my hubby built years ago off the side of our porch. If you do have to replace your plant boxes another suggestion is metal bar frames with coco liners. Flat bar shouldn’t add too much weight. Just a thought. It looks fabulous as is though.

Awesome Julie!, I’m glad you’re getting inspired. Show us what you make when you’re done!
-Josh

Hey Jazz, very good point. I have already noticed some warping. I think it adds a bit of character to it all, but yea, I’m hoping it doesn’t get to bad. I didn’t know they made long plastic pots, I guess if I have to redo it, I’ll find those.

I love this, is beautiful, but are those troughs for planting? Just a suggestion, it’s probably really important to find long plastic pots that fit in there to plant in, rather than directly putting dirt into the wood trough. You may have thought of that already, so ignore me if you know this, but I’ve made that mistake and had the bad experience after putting all the work in, and i would hate for that to happen to you with such a beautiful project you worked so hard on. The thing is that the wood really warps from the direct moisture, and surprisingly quickly. I think our boards were pushing apart in only a year, though here in so cal we have year around gardens so they were being watered all that time

You did an awesome job! Totally transformed the space. Love it!

love how this turned out!

I love all the Josh posts, but as someone who doesn’t have a great amount of ‘tool knowledge’ or a hunky hubby who does – perhaps you guys could do an educational post about power tools – some basic ones, maybe some other less-basic but frequently used ones, or where/how to rent them if you don’t already own them. Some of the Josh projects would be easy enough to do, but are overwhelming when you have to google all the individual terms/tools first! Just a thought! Thanks! 🙂

I’ve been meaning to try making my own outdoor furniture because I just can’t find exactly what I want. Seeing all your projects inspires me and makes me want to give it a shot, it seems doable! 🙂

I love it! I wonder how many mes it would take to build that thing. But now I know I could do it providing a 1000$ budget for tools and another 1000$ budget to bribe friends to help me 🙂 Looks great. Don’t let us hang too long on that cliff, you know what blisters feel like now!
(I’m sorry this is not a reply to Oddlylovely but I am not able to comment directly to the post itself… bug?)

I cannot get over how beautiful this back yard is and how much the pergola helps it “come together.” I’d just like to get my garden even looking 50% decent and not like a wild jungle!