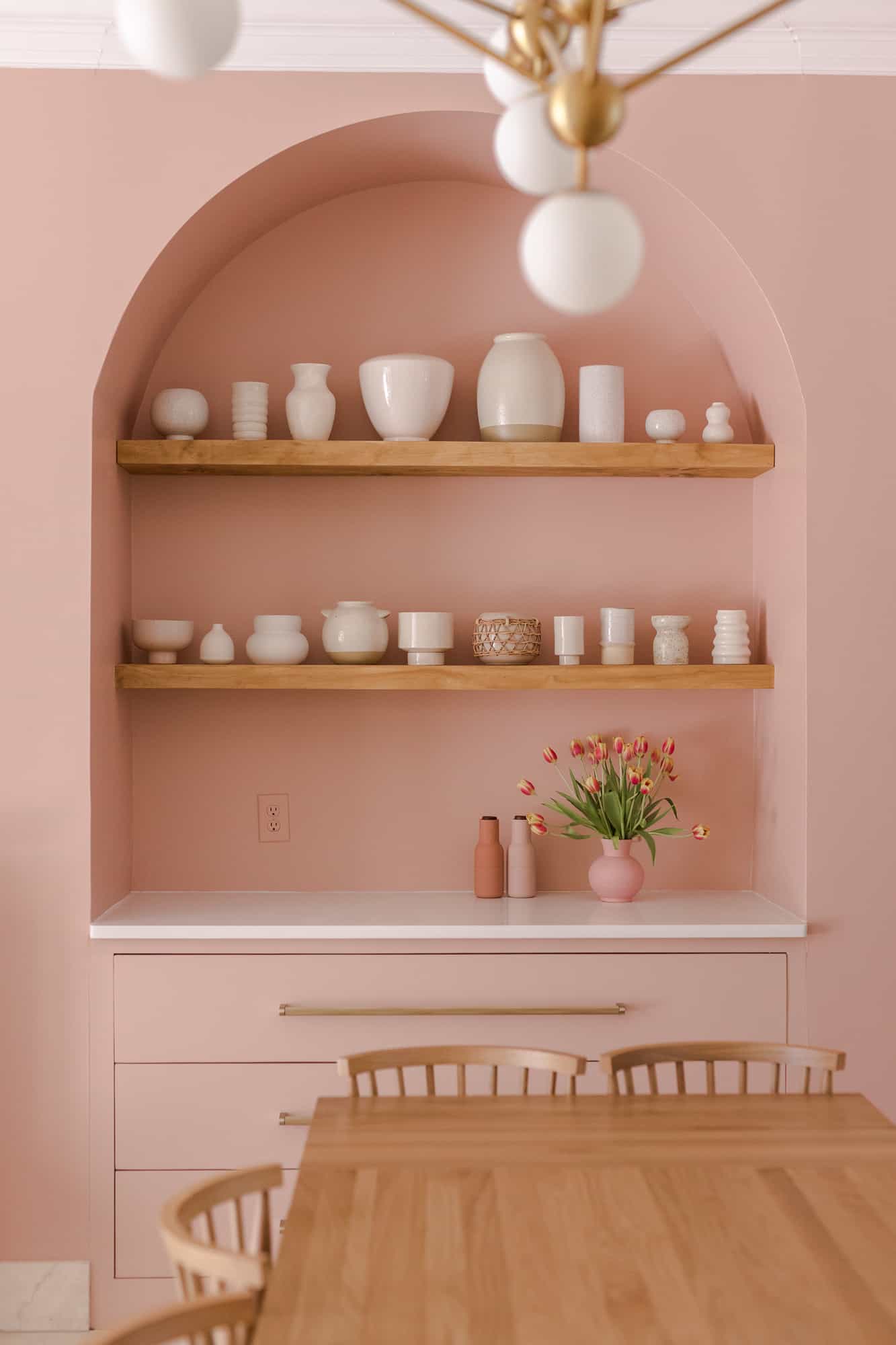 I’m really excited to reveal the built-in that we added in our dining room. When we first viewed the house, I knew the stone shelf wasn’t for me and that it was the perfect spot for a built-in of some kind.

Here’s a before and after: 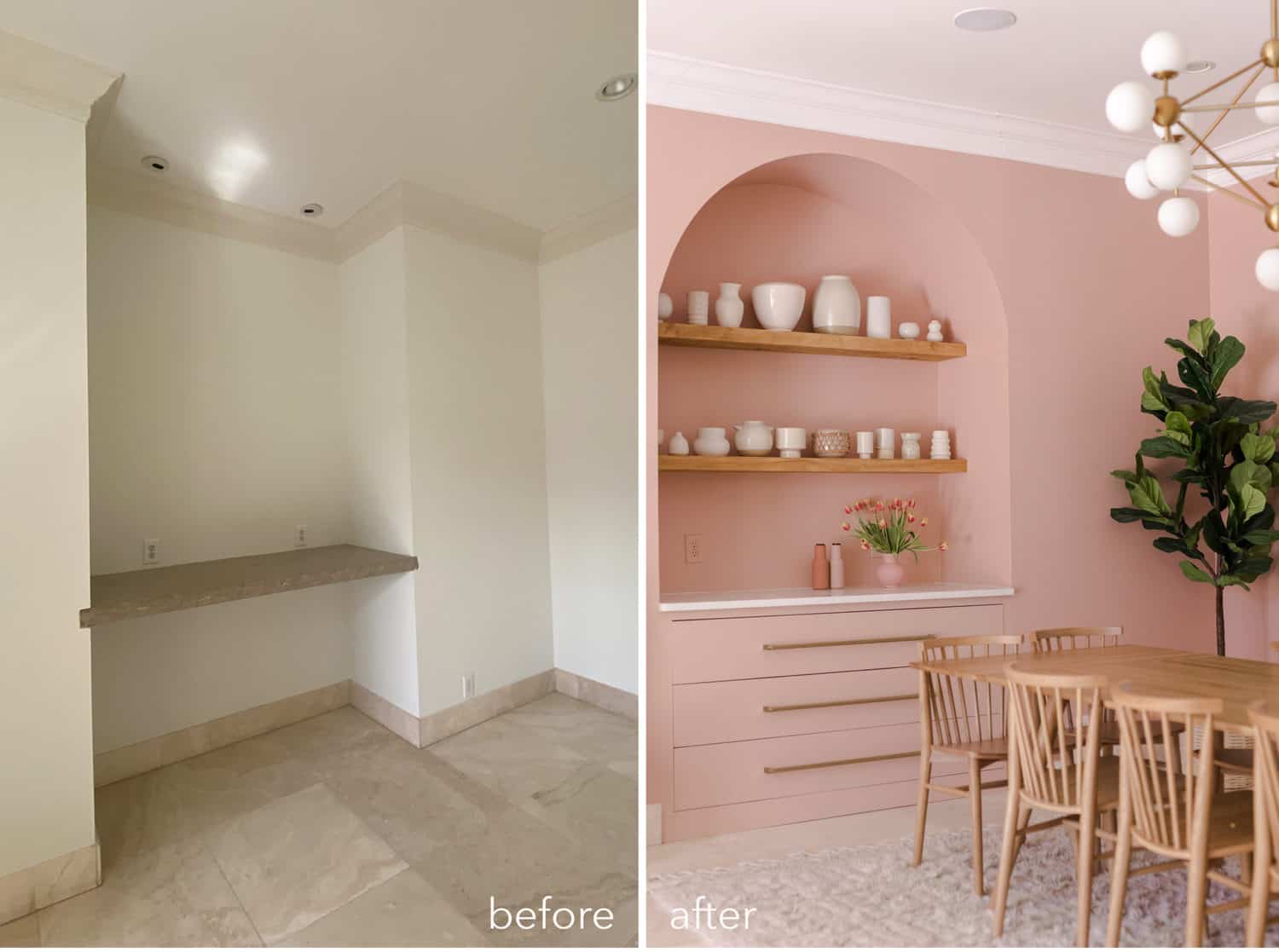 I’m thrilled with how this came out. Since it was something we’ve never done before, we weren’t sure if we could pull it off, but we had an easy backup plan of adding some bookshelves. It’s always good to have a backup plan!

This is not a DIY post and we don’t have step-by-step photos for each part of the process. It was more of a semi-DIY because we were learning everything for the first time as well as hiring two steps out (more on that ahead). I will do my best to explain the steps we took to complete this project. The cost of the project was around $2,500, which included the drywall work, the quartz counter and the oversized hardware. 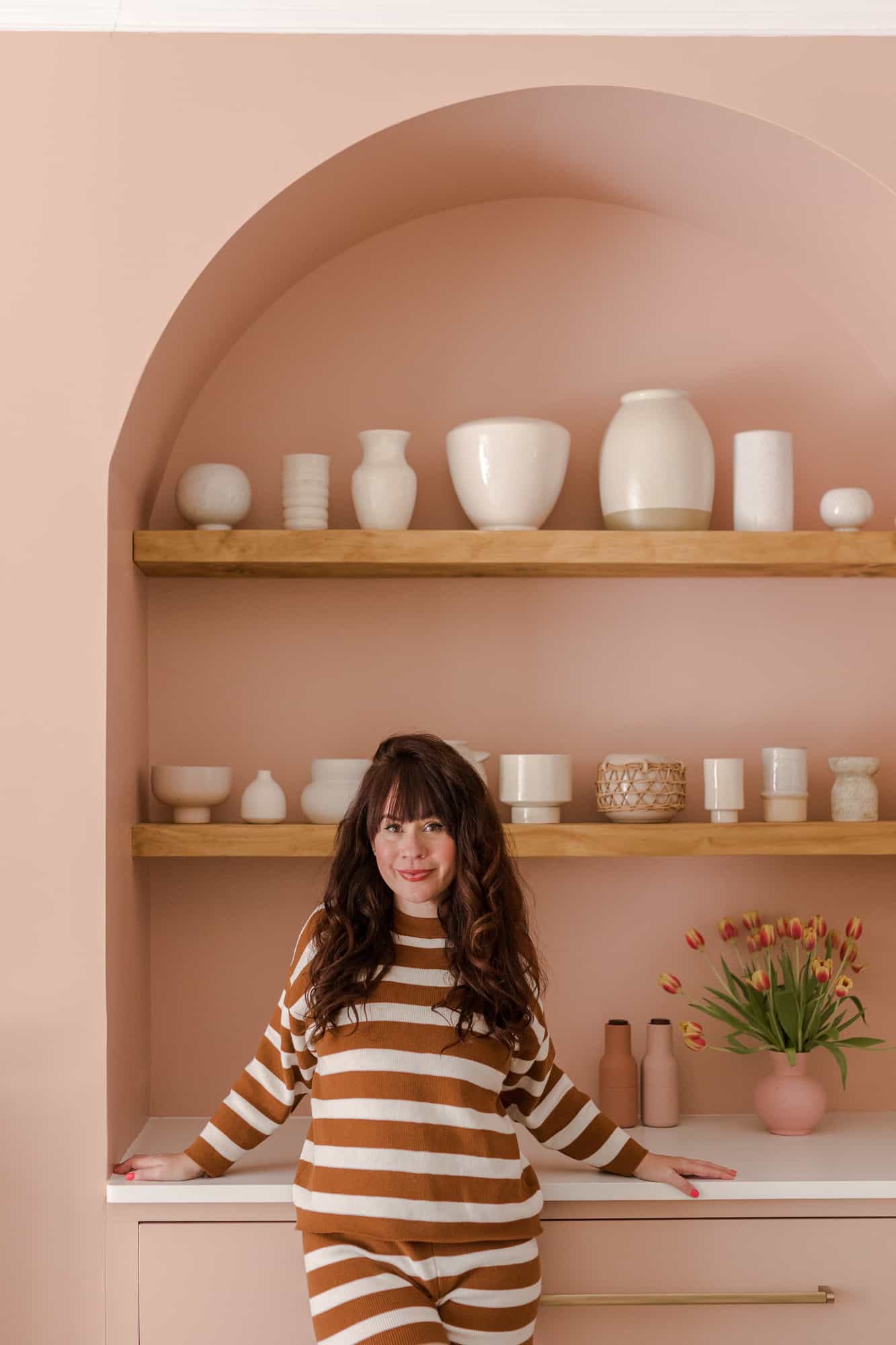 Me for scale 🙂 Here’s a link to this comfy striped set. 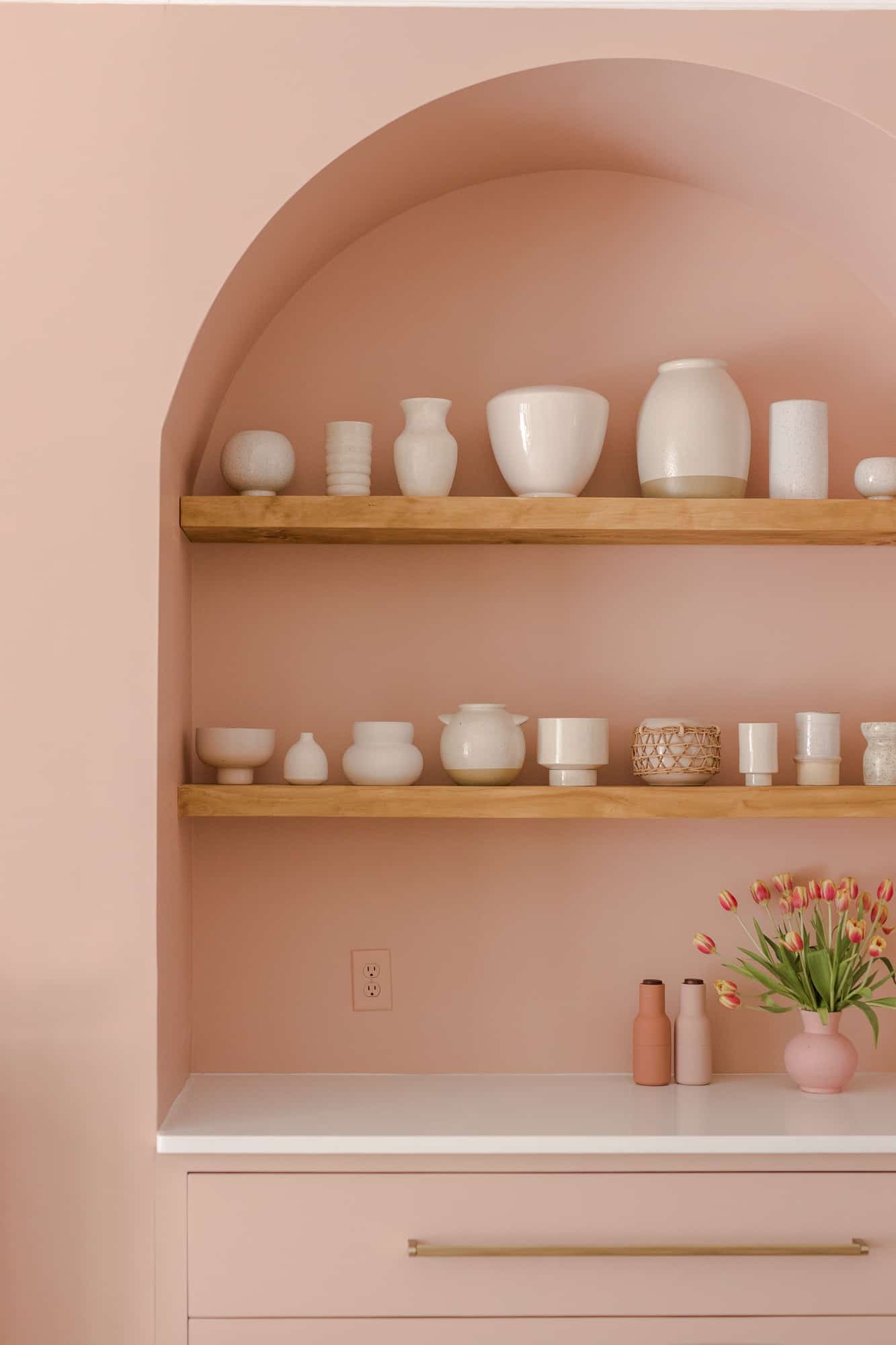 The first step was removing the stone shelf. It was set into the drywall and permanently attached, so there was no clean or simple way to remove it. Collin demoed it with a sledgehammer. It left damage to the wall, which we anticipated, and were OK with since we already had plans to hire a drywall professional. 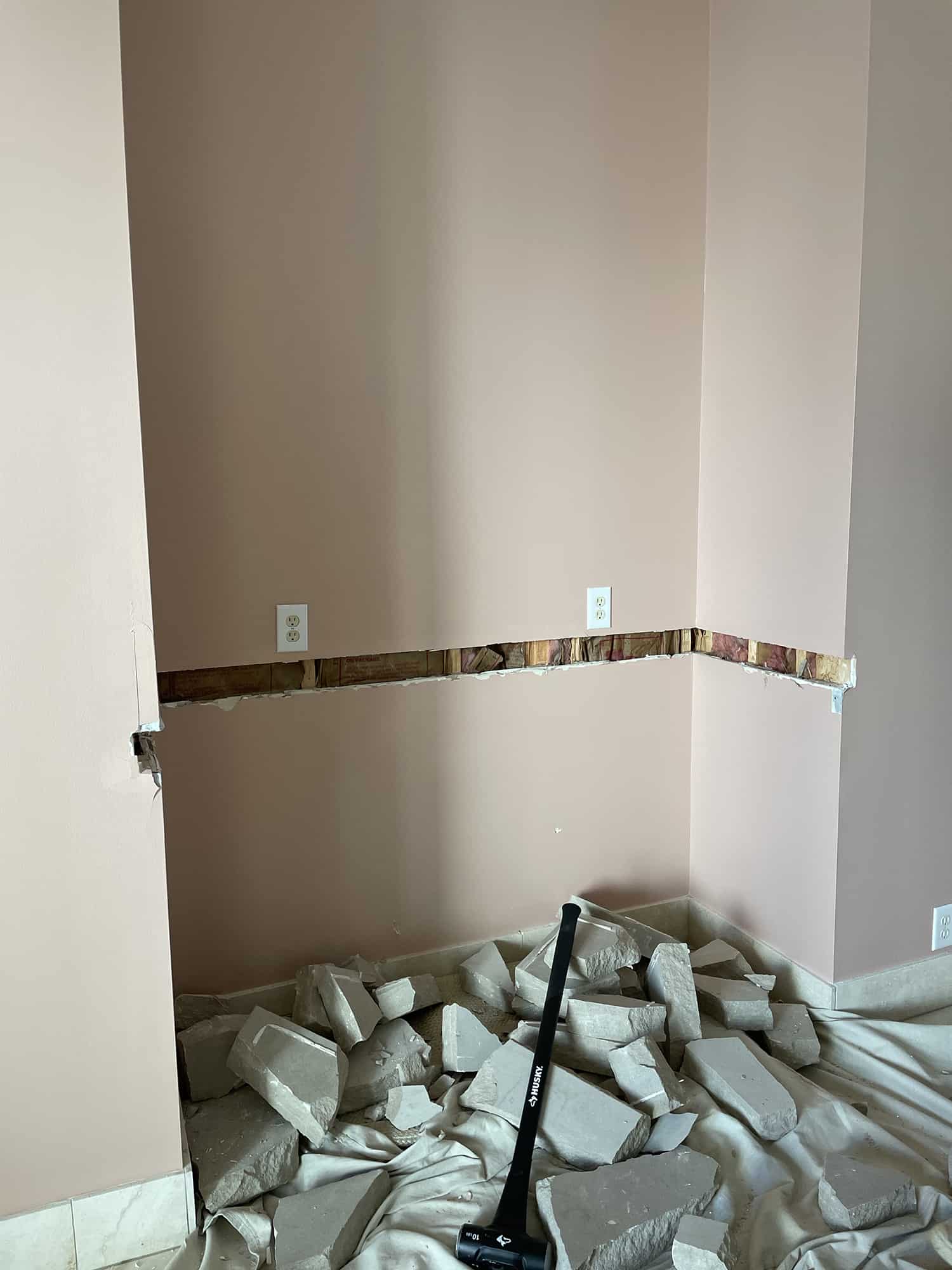 After the stone shelf was gone, Collin added the three built-in drawers. It was his first time to build inset drawers and also custom drawers. The opening was really large or I would have purchased pre-made drawers. But in this case, custom looked way better than the options I found online. It was fun practice for Collin, too.

Next, we added a temporary plywood counter. 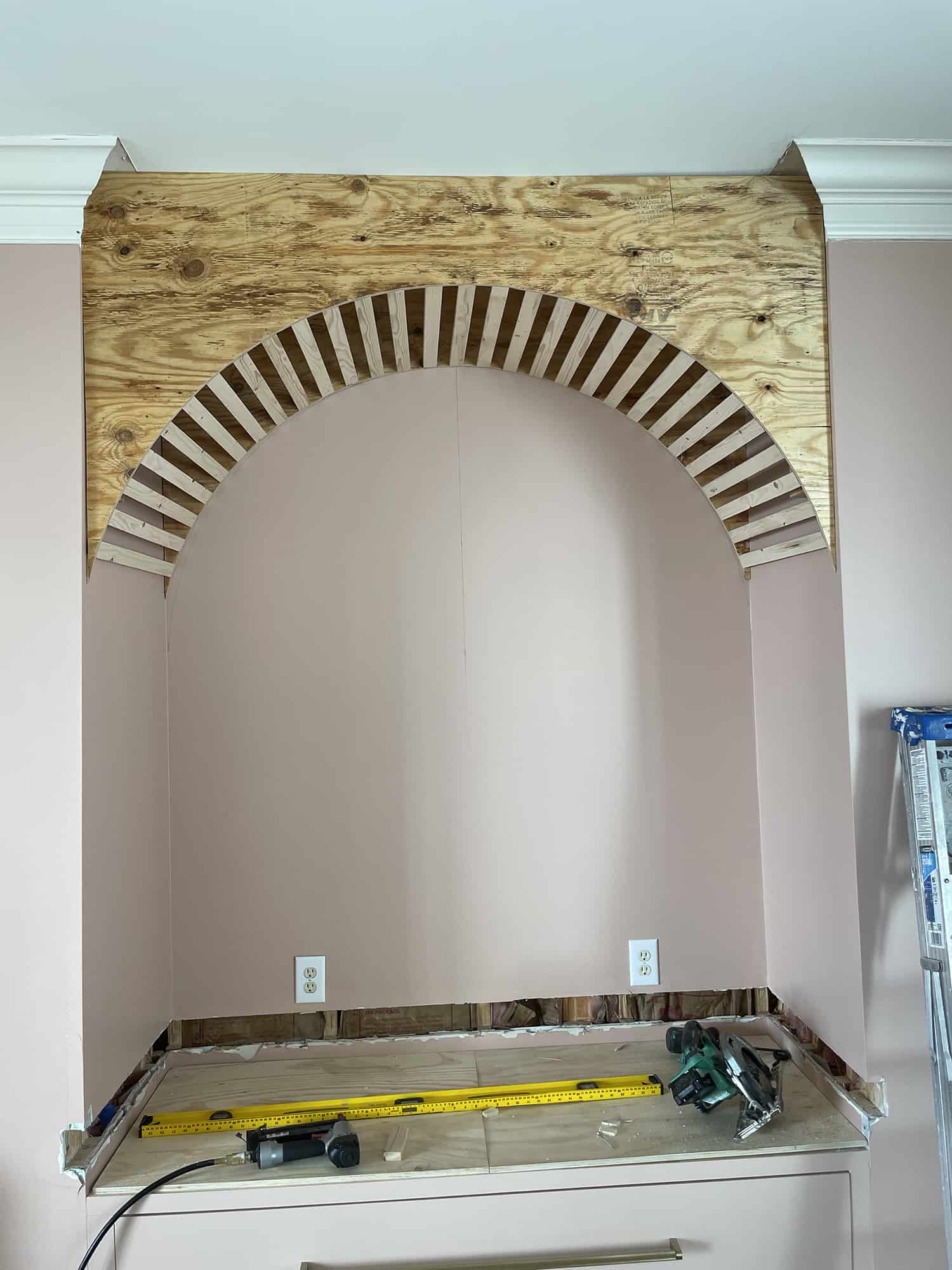 Next, Collin did the framing for the arch. We drew a basic shape of the arch we wanted and he did the framing by looking at DIYs and YouTube videos online (the best way to learn basically anything). 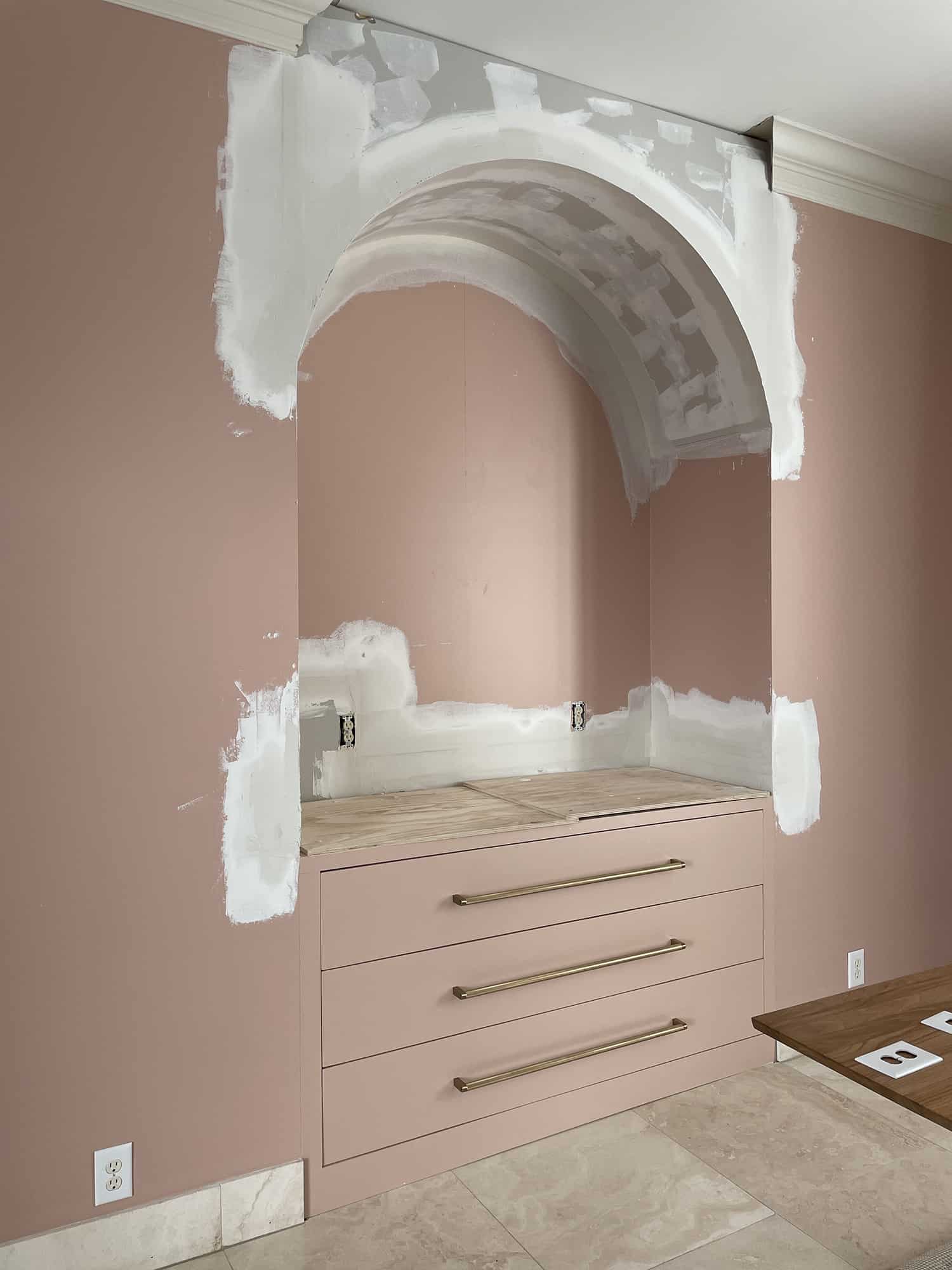 Next, we had our drywall appointment and they did an incredible job.

After that, Collin added the two wood shelves. Last, we had the countertop appointment and we were done! 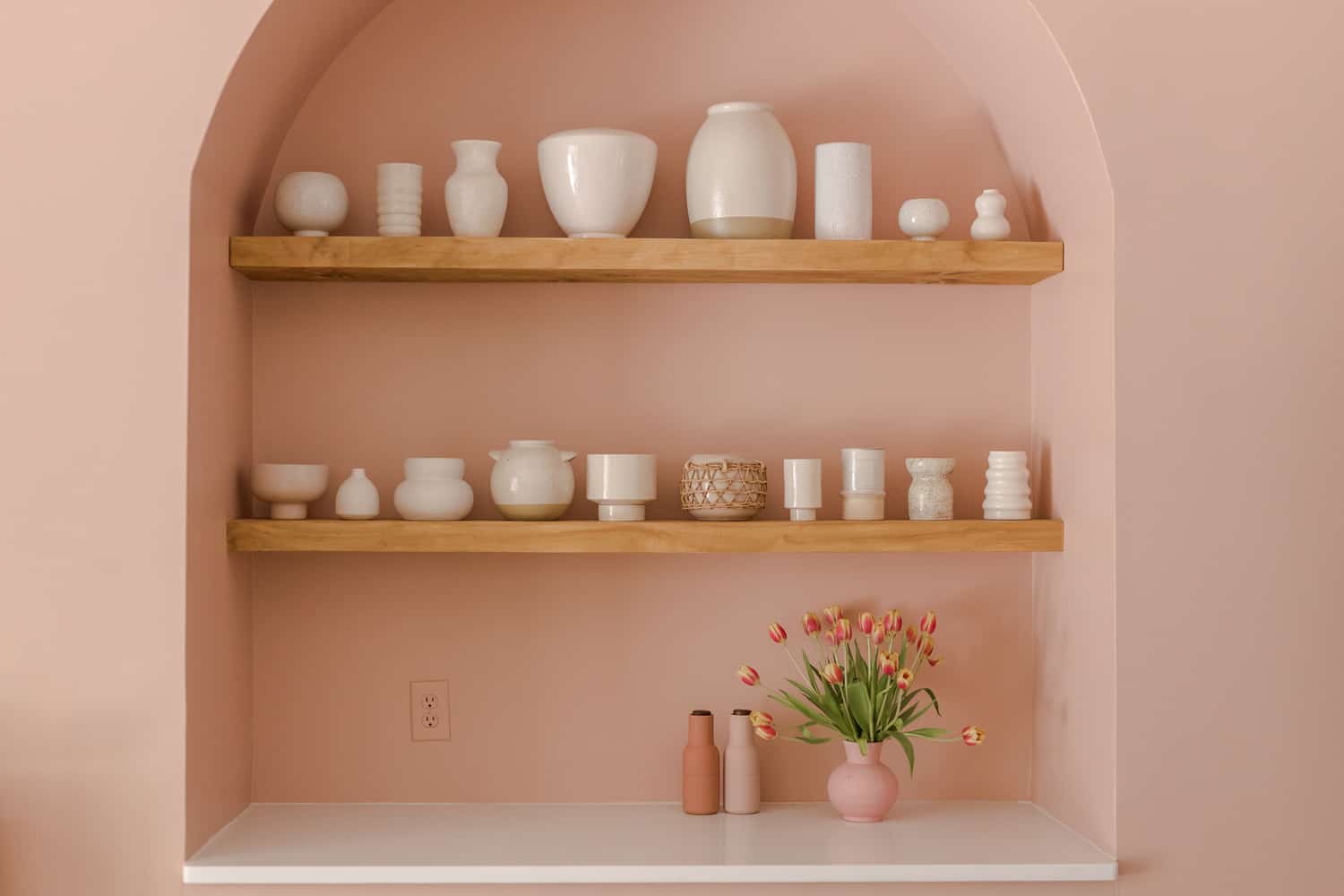 Let me know if you have any questions in the comments section! 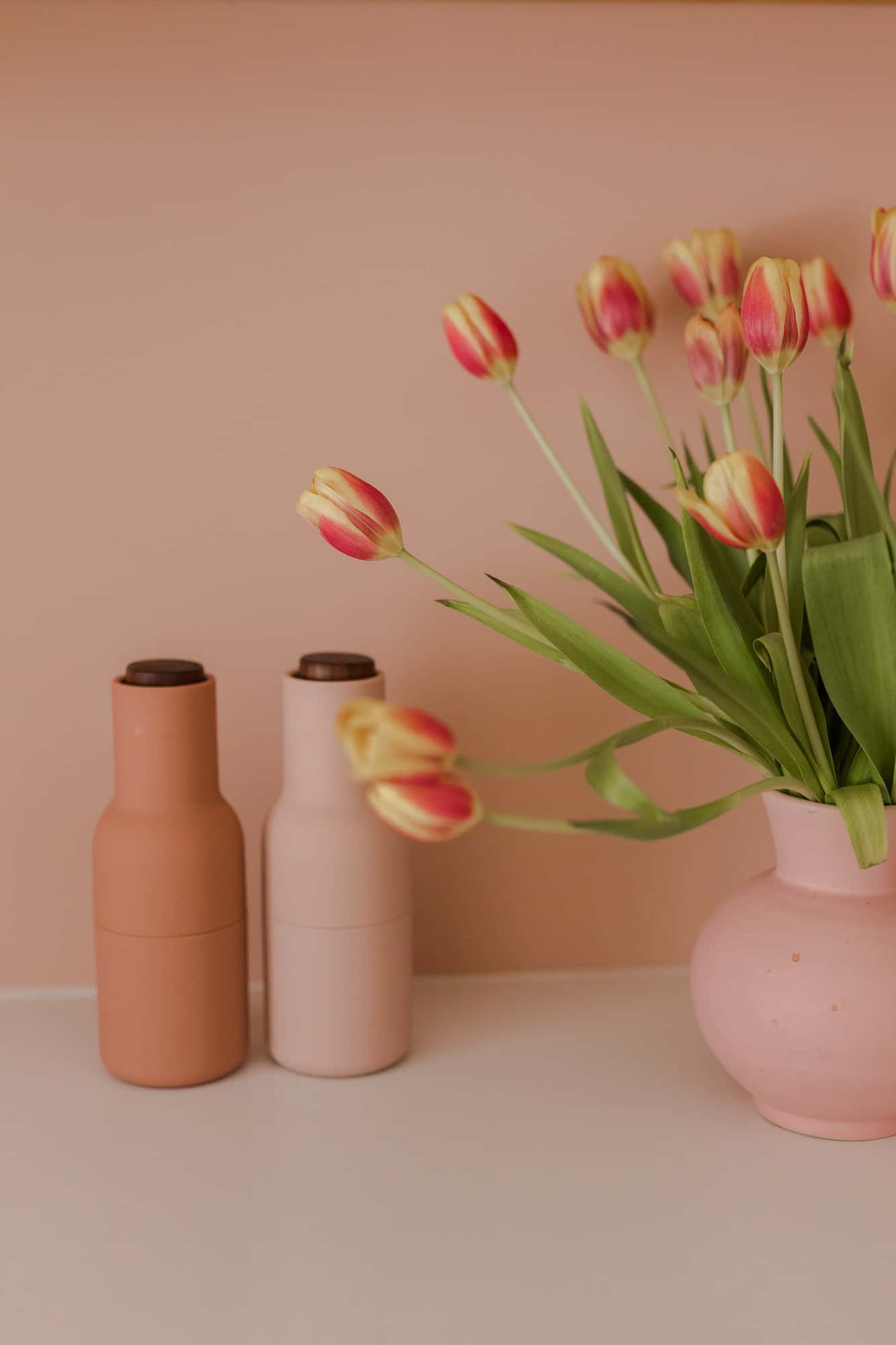 I love these salt & pepper grinders. Thanks so much for reading! xx- Elsie

What’s the width of the arch and the depth of the counter and shelves? Love this look!!!!!

How did he make the two wood shelves? Can you link to a YouTube tutorial he followed?

Hey! This is so gorgeous! Was just wondering what paint colour this is!?

This is beautiful! What paint color is that? I love it!

It looks beautiful! The arch and the built-in look really change the space. I am really enjoying seeing how you update your 90s home to feel more like you! You are the queen of displaying glassware/ceramic collections – it always looks so good and inspires me.

I really appreciate that! Thank you!

Probably my favorite aspect of this is that you took a very angular and pointy space (the way the trim made sharp angles at the ceiling) and made it curvy. My partner teases me about my insistence on adding round shapes to spaces but to my eye it makes a difference when things like walls, tables ,windows tend to be angular. Curves add balance. Love the warmth of the wood too, although I wish I could see more of your interiors without a filter so I can see how things actually look in real life

It’s so much more functional and elegant! On the trim, were you able to salvage the original trim from the alcove, or did you have to find new trim to match the old?

Hi Michelle,
If you look closely you can see (I think!) that the trim is patched in. Eventually when we do more to our ceilings I will probably get it replaced but we’re really happy with how it looks for now. I don’t notice it at all in everyday life.

Thanks for the kind words!

First of all, it’s beautiful!! But also, you added so much functionality! Those drawers would be such an awesome place for storing table linens and party platters/supplies. So much more useful (and way prettier!) than just a single stone shelf!

Thank you Meredith! Yes we have a ton of extra plates, napkins and stuff like that in there. Basically Thanksgiving or dinner party set up! 😀

Thank you!! Yes Collin built the shelves as well! :))