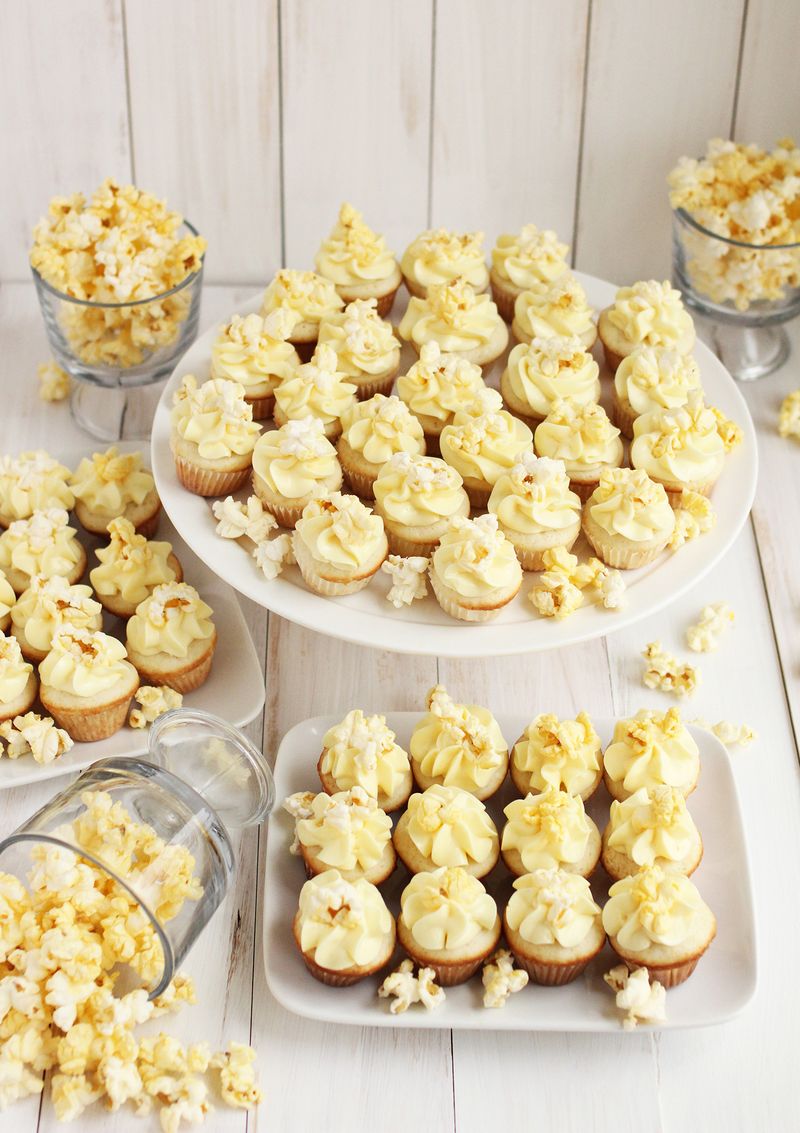 You are probably in one of two groups. You either know the Oscar's are this Sunday, or you don't know (and probably don't care). I don't always end up watching the whole thing, and there's even been years I've missed the Oscar awards altogether but, I must admit I get excited for them. I used to be completely obsessed with them! This was partly due to the fact that I used to dream about being an actress, but also THE DRESSES. It's so fun to see what everyone wears! 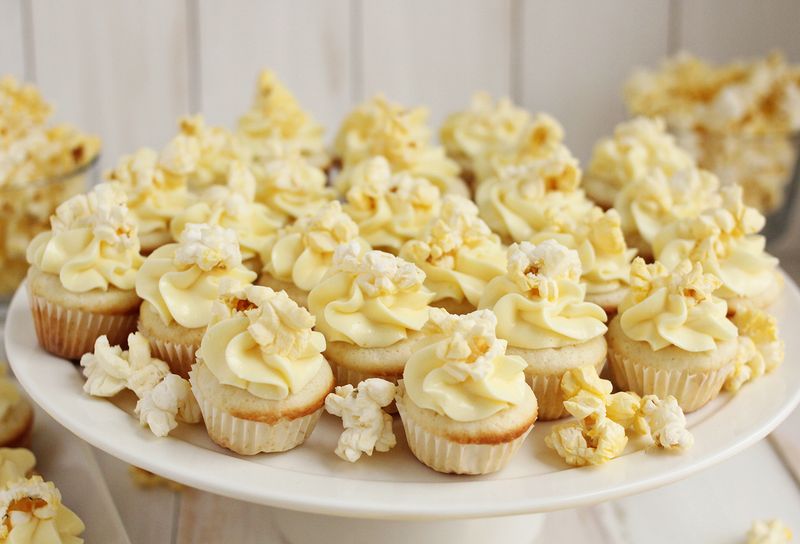 These cupcakes are my nod to the Oscar's this week. But also, Trey challenged me to find a way to incorporate buttered popcorn Jelly Bellies into a cupcake recipe. Sounds sort of weird, right? I wanted to create a cupcake that did indeed, showcase that buttered popcorn flavor but without being overwhelming or unappealing. Too much and it can get kind of gross. And cupcakes should never be gross.

I'm happy to report these are mostly sweet and delicious with just a little nod to that salty, buttery goodness we love about popcorn. So, don't be scared. You're gonna love these. 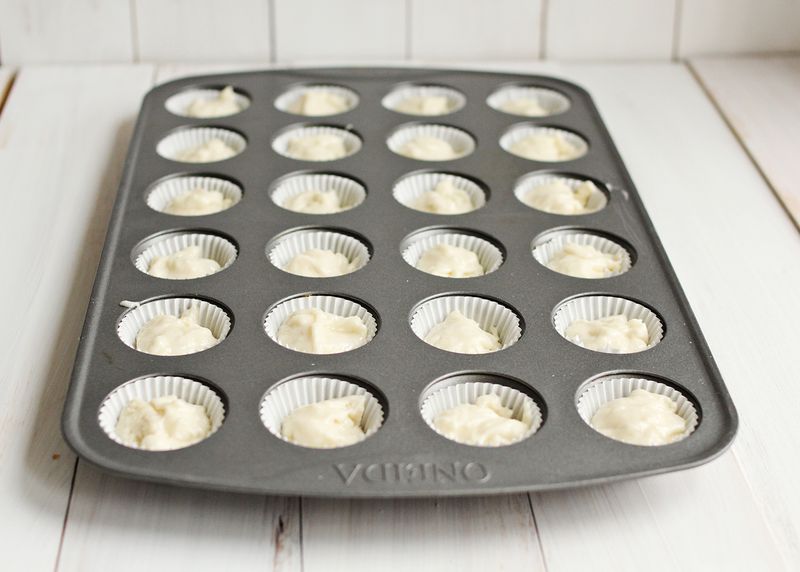 First sift together the cake flour, baking powder and salt. Set aside. 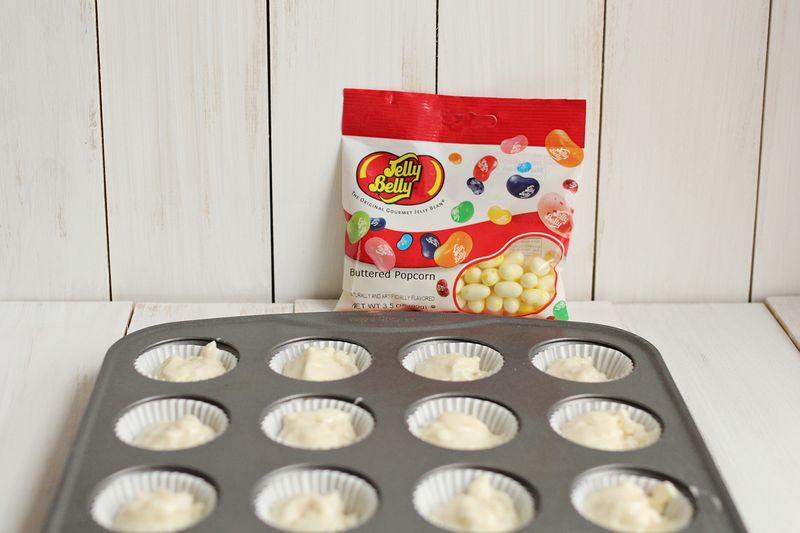 With an electric mixer, or stand mixer cream the softened butter until smooth. Scrape down the sides of the bowl, add the sugar and beat again until the mixture begins to looked whipped (softer and creamy in texture). Begin adding the flour mixture and milk in intervals, mixing in between. Add in the vanilla extract as well.

Fold the whipped egg whites into the batter using a rubber spatula. Cut through the batter down the center, then swiftly stir to one side. Keep mixing in this manner until nearly no lumps remain and the batter looks cohesive in texture.

Spoon batter into prepared baking cups. Add a jelly bean the center of each cupcake. 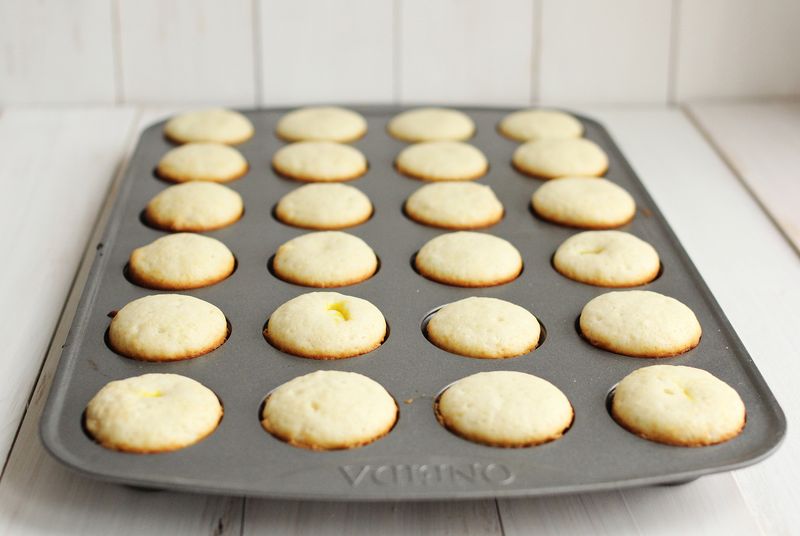 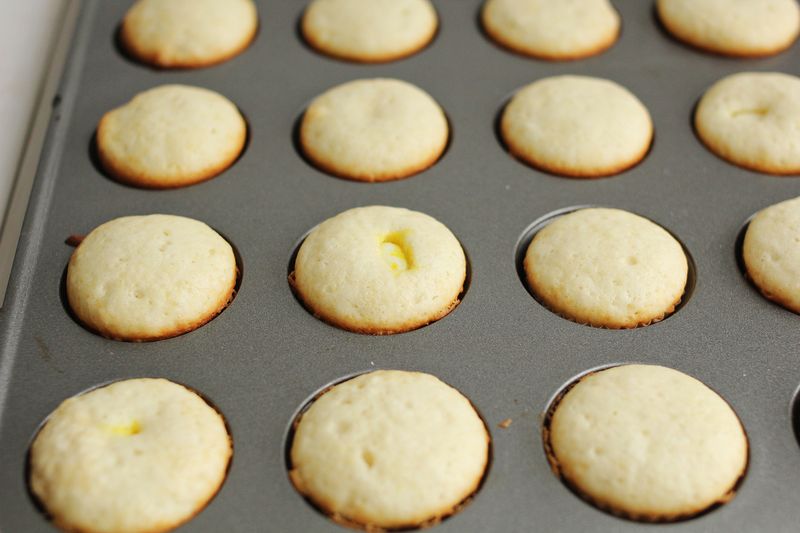 Allow those to cool while you make the frosting. 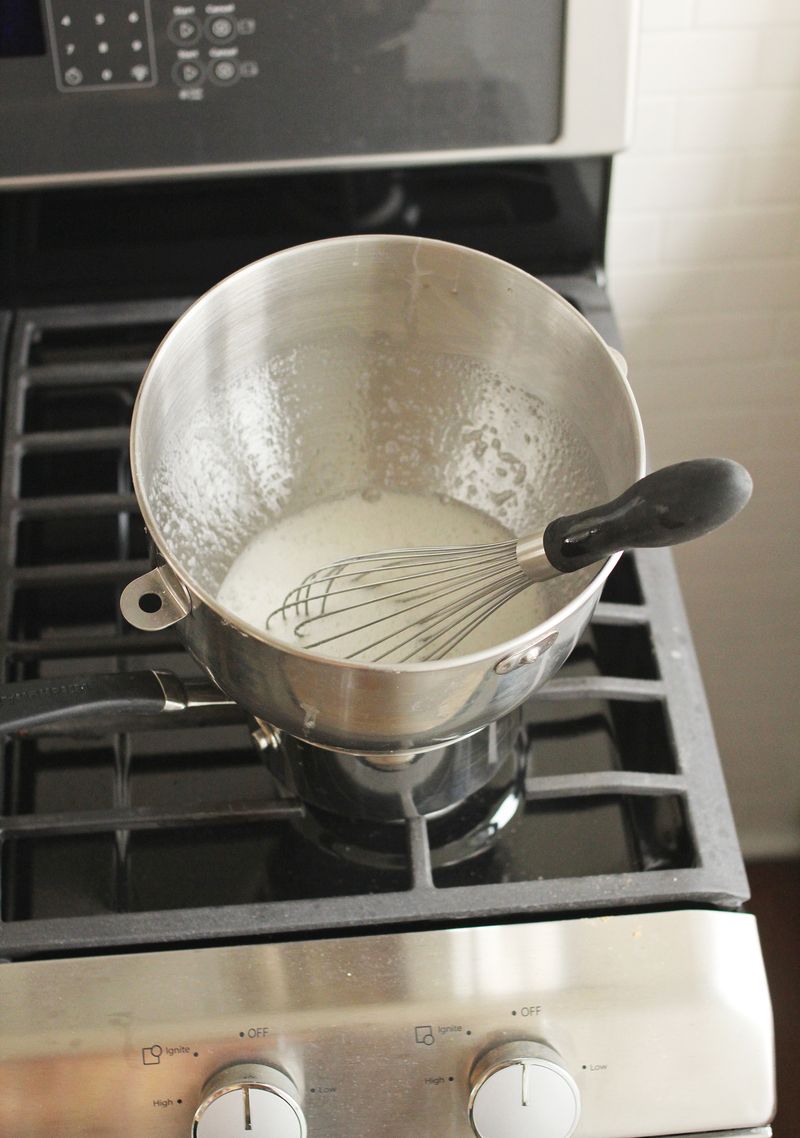 This is my favorite frosting: swiss meringue buttercream. It's perfectly appropriate for this particular cupcake because it has a lot of butter in the mix. 🙂 Lot's of people feel intimidated by swiss meringue buttercream, because it can be a bit tricky to get right. The truth is mine often turns out much more grainy than it ought to be, the most common "mess up" that can arise. But I have a trick that fixes this every time.

First, combine the egg whites and sugar in a metal or glass mixing bowl. Set this over a pot of simmering water. Whisk until the egg whites are slightly warmed and the sugar and completely dissolved. You should be able to rub the mixture between your fingers without feeling any of the sugar granules. If it still feels grainy, keep whisking. 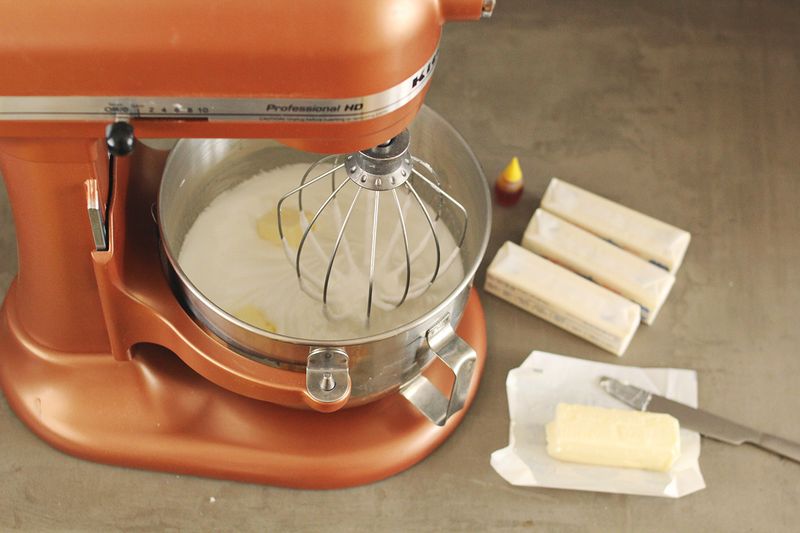 Now, using an electric mixer or stand mixer, beat the egg whites until stiff, glossy peaks form. You don't want to over mix but you do want those peaks to be stiff. Similar to pavlova, see these peaks.

Then, with the mixer running on low, add the softened butter a few tablespoons at a time. You really want your butter to be room temperature, it can't be too cold or it wont' incorporate well. Once you've added all the butter turn the mixer up a few notches to whip the batter for a few seconds (getting rid of any air bubbles).

Your frosting should be silky smooth at this point. 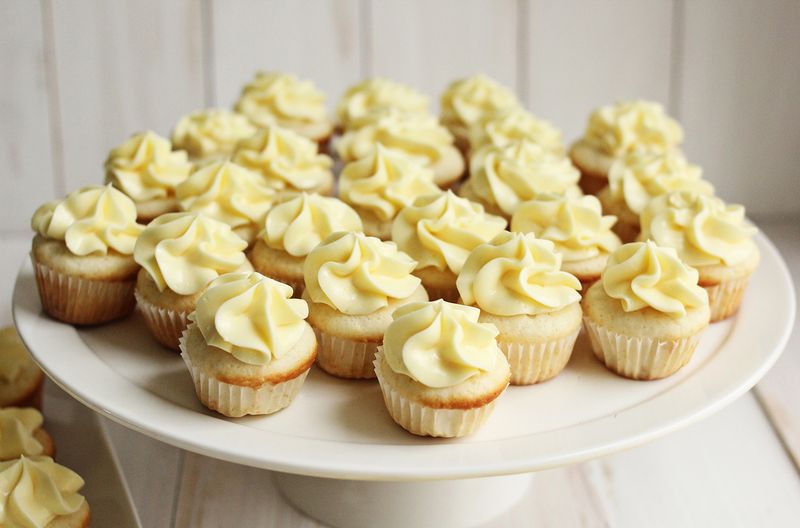 Oh, your frosting isn't silky smooth? It looks like a lumpy, grainy mess? Yeah, that happens to me too. At about this time I feel like throwing my hands in the air and yell about the injustice of the world.

But then I realize that's maybe a little dramatic for a frosting mishap.

Here's how to fix grainy swiss meringue buttercream. Remove about 1/4 cup to 1/2 cup of the grainy looking frosting to a mug or small microwave safe bowl. Microwave this on high for about 15-20 seconds, until mostly melted. Turn the mixer on low and slowly stream the melted frosting into the remaining batch. Turn the mixer up to whip everything together for a 10-20 seconds. If it still looks a little grainy, repeat again. Sometimes I need to do this twice in order to get that silky texture.

See the frosting above? It looks super silky smooth right? It was a grainy, lumpy mess until I did this final step. This works for me every time. Now you'll never have to be scared of swiss meringue again. Hooray! 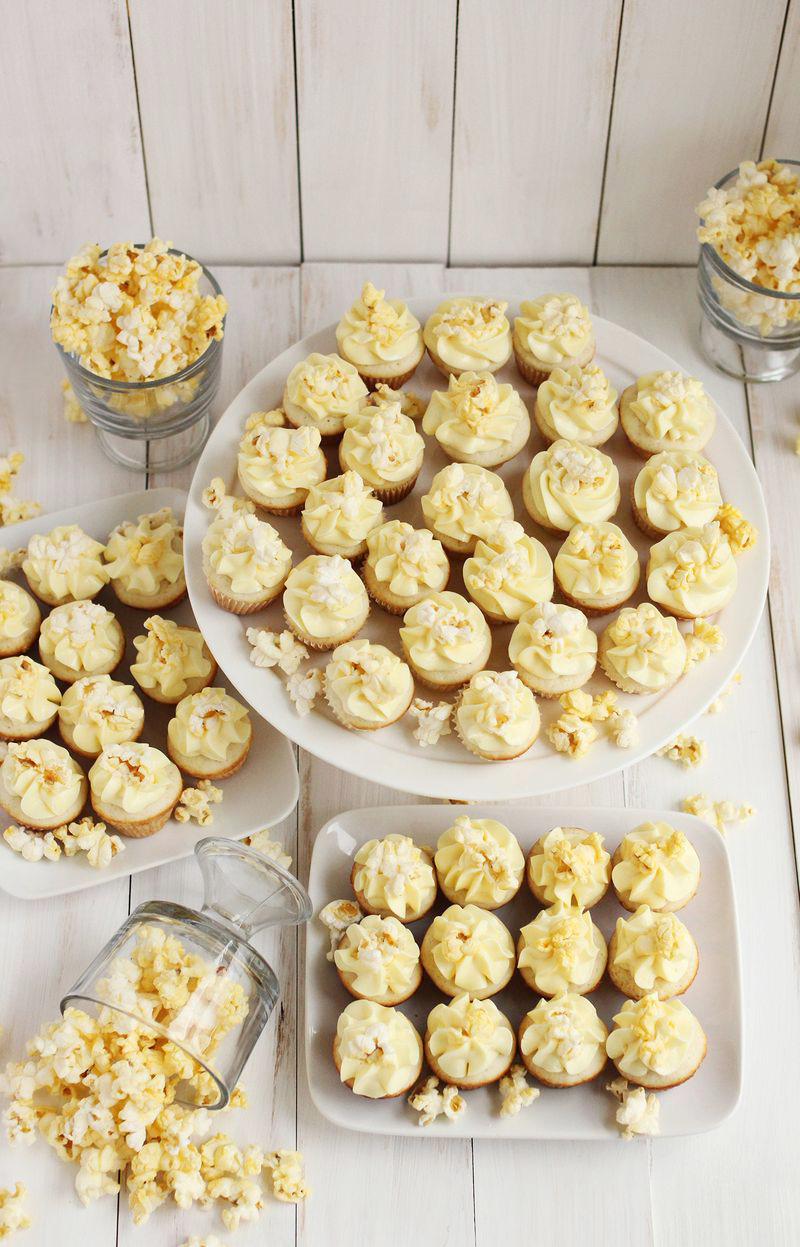 Pipe your now perfect frosting onto the cooled cupcakes. Top with a piece or two of buttered popcorn. These are best eaten the day they are made. So host a party and surprise guests with these unexpectedly delicious salty, sweet cupcakes. Perfect for a movie night, or Oscar watching party. 🙂 Enjoy! xo. Emma