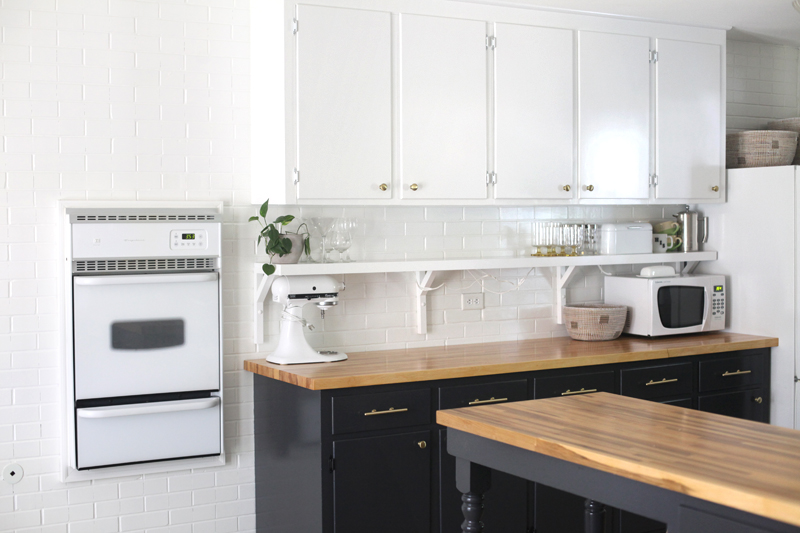 Hi! It's Mandi here with another look at our kitchen renovation project. The brick walls were a major selling feature of our home, considering how most of the ranches we looked at were pretty boring, without any special features causing them to stand out in my mind—other than a low price tag. When we moved in, we considered painting the brick walls, but I decided I liked their natural tan color, though secretly I wished they were the beautiful textural bricks you see uncovered in much older homes. (Silly, wishful thinking and totally inappropriate for the period of our home.) I'm really glad we settled on this little home with its cool brick walls, though they have not been without their challenges.

An obvious challenge with brick walls is hanging anything, much less kitchen cabinetry! In the past I've tried using sticky 3M hooks, but when it comes to heavier art, nothing beats a bolt in the wall, which requires special tools to do in brick. Another challenge with our brick walls has been the staining that's built up through the years. Brick is porous, and it seemed like I'd never be able to get out the stains. But the last challenge we've faced was perhaps the most stressful of all—removing tile and mortar from a brick wall. Who would even do that?! Install tile over brick? I'm not a violent person, and in fact I'm a Quaker pacifist, but I wanted to throat punch whoever did that to our beautiful brick wall when it came time for me to remove it.

Yes, brick walls are beautiful, they are challenging, but I think they're worth it! Here's how we've overcome each of the challenges of the brick wall in our kitchen renovation. 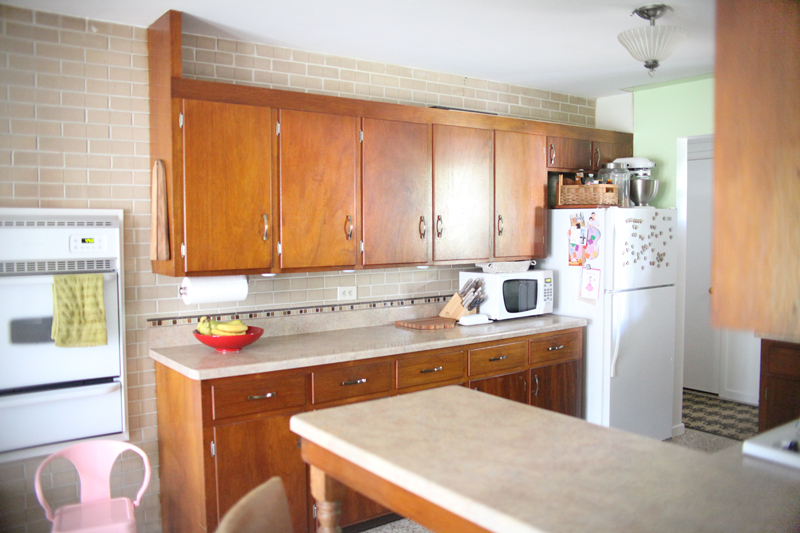 This is how our kitchen looked before starting work. Dark, sticky cabinets with a laminate countertop that too closely matched the brick walls and was edged by a strip of mosaic tiles that didn't suit my taste at all. I was originally planning on leaving the bricks this tan color, but removing the tile, painting the cabinets, and replacing the countertop. Unfortunately, the previous owners forced my hand a bit by the tile work that had been done. I knew it would be a scary prospect to remove, but it ended up being way worse than I had ever thought. 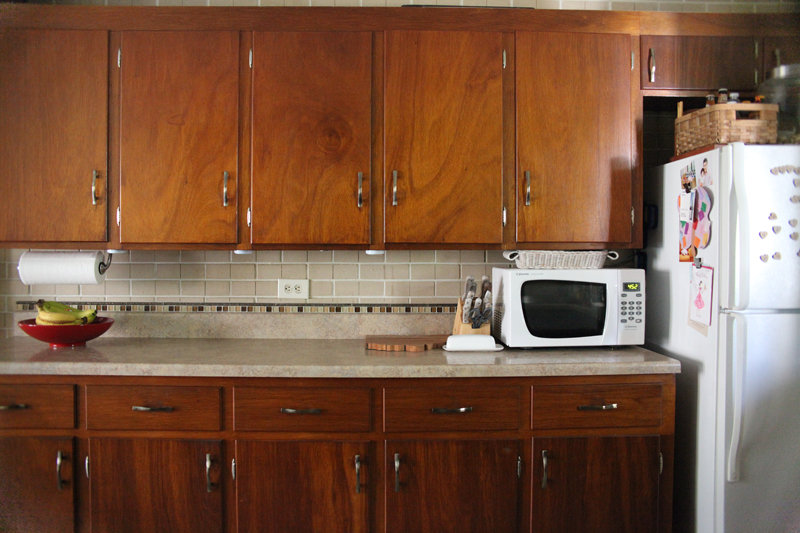 The Horror of Removing Tile & Mortar from Brick Walls 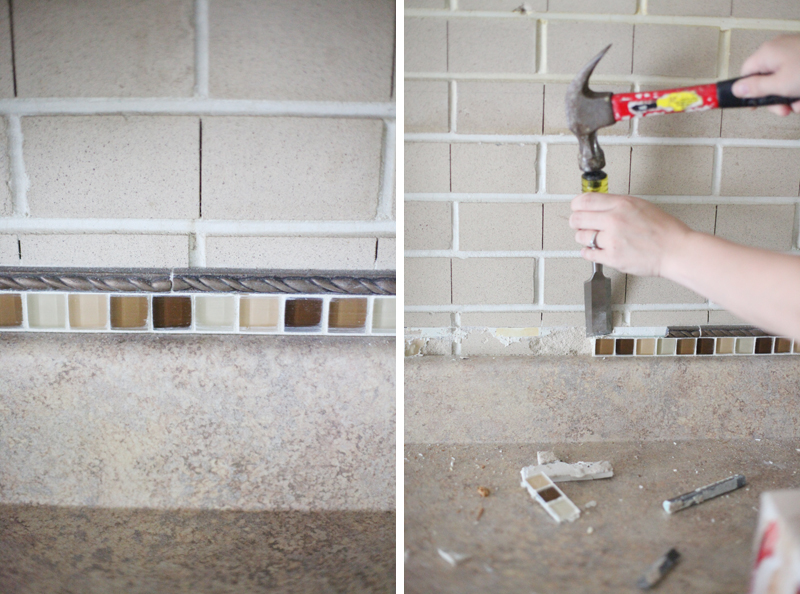 It was bad. I began plans to rebuild the bricks that had chipped away and matched a color of flat paint to touch up those spots I had rebuilt, hoping that they wouldn't look too awful against the unrepaired bricks. But I just felt sad about the whole thing. My vision had been compromised, and I wasn't liking many of my options. 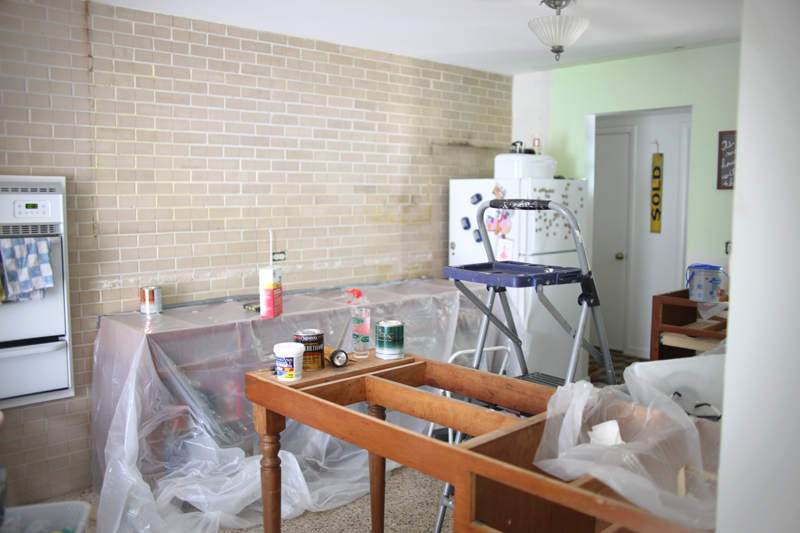 It was my brother who suggested that we go ahead and paint all of the brick white. "Are you going to come over with your paint brush to help?" I asked. He was busy, but I still liked his idea. So Phil and I tackled the job ourselves. But before we could paint the wall, the bricks did need to be repaired. It was time to get a little creative. 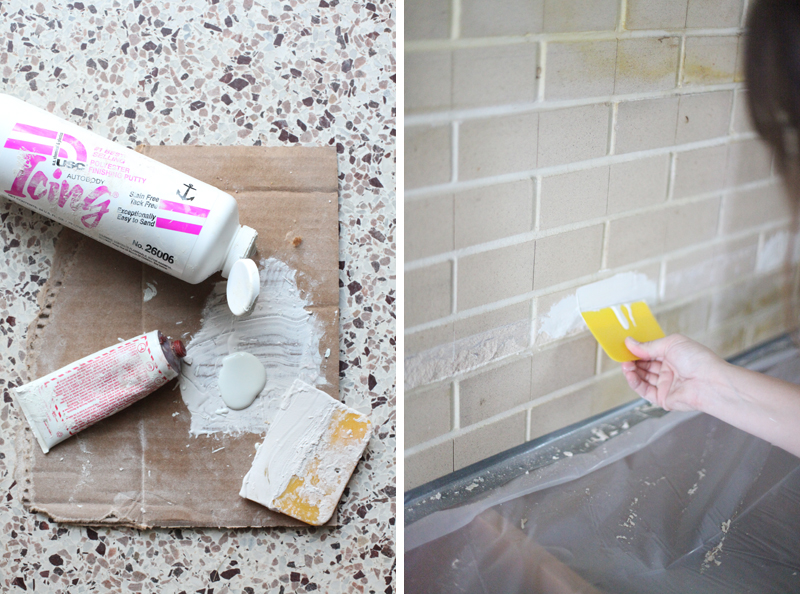 I went to an auto paint shop and bought some auto body filler to rebuild the bricks! And then I spent my Saturday evening and and night working on rebuilding them. I mixed the Icing with the hardener and set to work by rebuilding each brick, layer by layer. The Icing sets up very quickly, depending on how much hardener you mix with it, so I would quickly smooth on the mixture with a little spatula, use a gloved finger to wipe away the area where the mortar lines were, and then quickly move on to the next brick. I worked hastily, building many layers that ended up being very uneven when they set up. So after each layer I used a power sander and a low grit sandpaper to smooth them down and prepare for the next layer of Icing. I kid you not, it took at least five hours to complete. And let's not talk about all that dust.

When I was finished rebuilding the bricks, they were very smooth and unlike the natural texture you see in actual masonry bricks. It wasn't a big problem to me, because my bricks were already very smooth to begin with, and I knew the paint would fill in what little porous nature they had anyway. But if I were working with a more textured brick, I would probably do a layer of Icing with less hardener (more working time) and use a sea sponge to give it some texture before it set up. 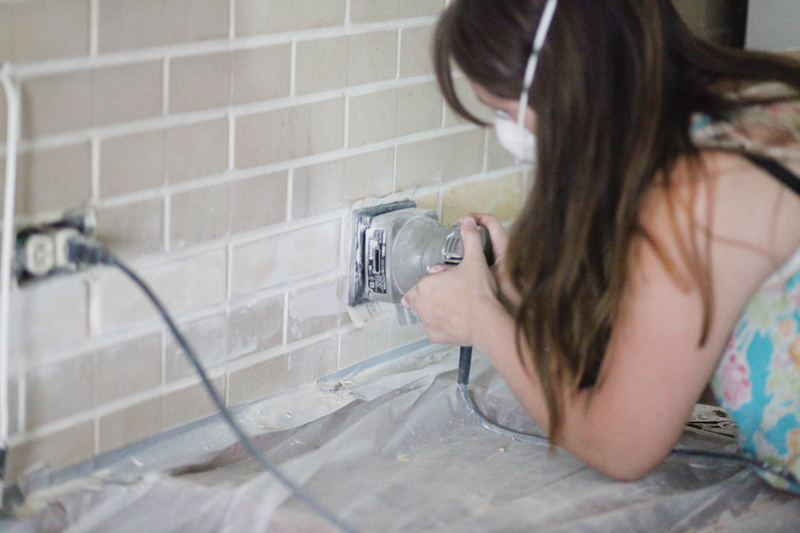 Next we had to clean the wall to prepare it for painting—something we were planning on doing even if we didn't paint it. I researched different cleaning products to use, but none of the milder agents removed much of the stains on our wall, so I went with an old family favorite—TSP, or trisodium phosphate. It's a powdery substance that you mix with water to create a powerful chemical cleaning solution that's tough on stains and buildup, but not so acidic to eat away at the brick. 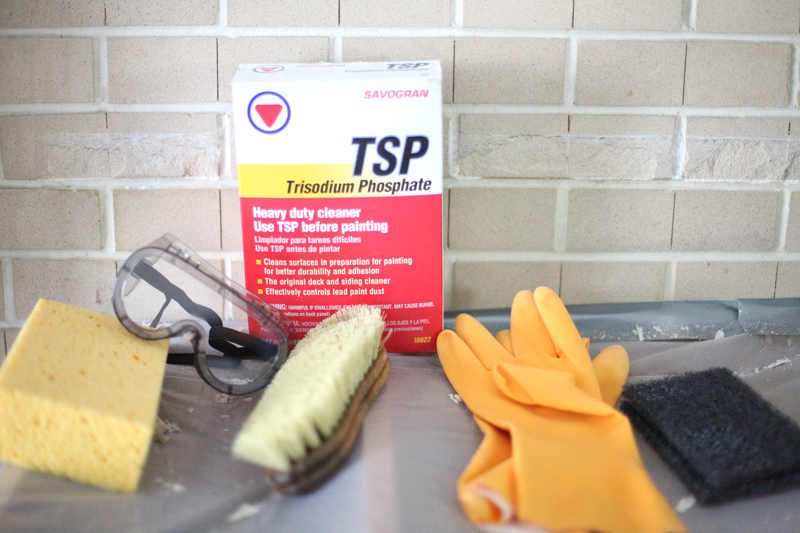 We always practice safety measures when working with TSP. Wear long sleeves, safety goggles, and chemical-safe rubber gloves. Once he was all dressed up and ready to go, Phil filled a bucket with TSP and water according to the directions on the box, and worked at the wall with a brush and then metal scratchy pads for the tougher stains. After getting all the stains, we did a rinse with plain ol' water and a sponge.

To be safe, if you're working around areas with outlets, turn off the breaker that controls that outlet—even if it's a GFCI outlet. 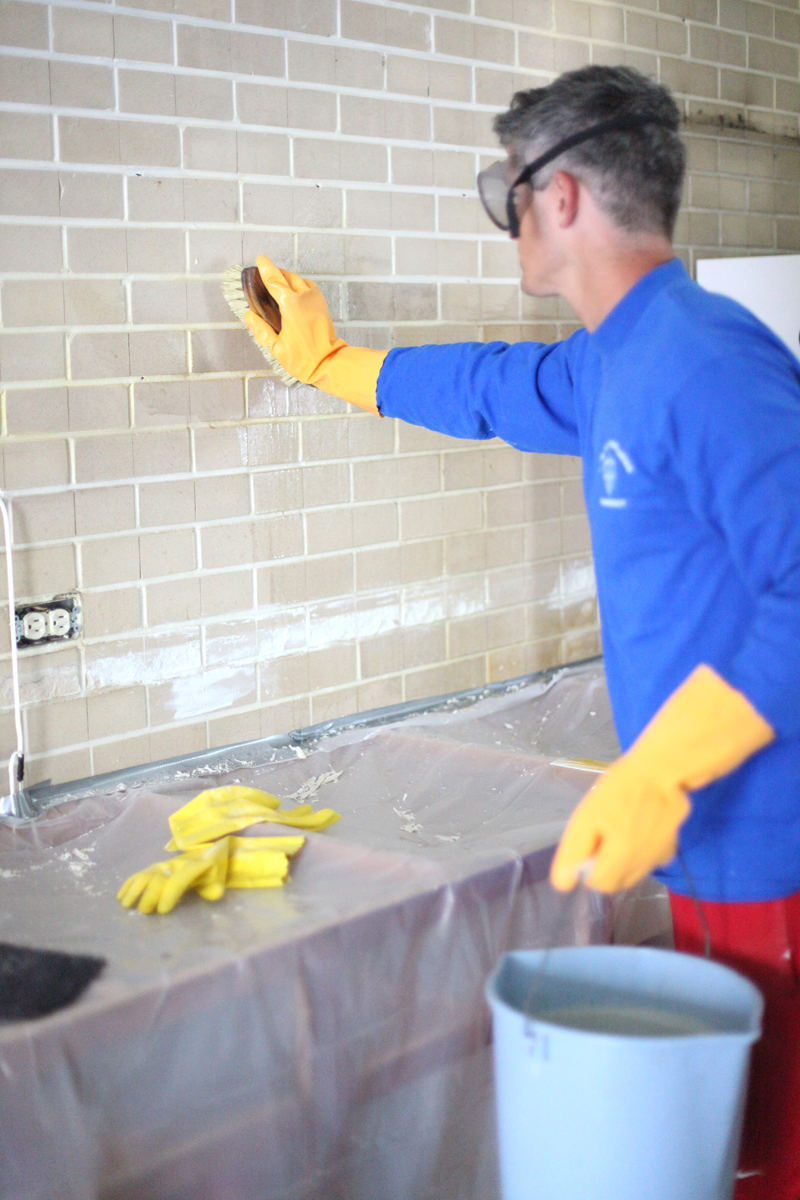 To further prepare the wall for the paint, I purchased a stain-covering primer. I like the Zinsser brand 1-2-3 primer, and the oil-based stuff is great for a long-lasting paint job. I filled in holes in the wall where the cabinets used to be (since we planned to move them) with painter's putty, which required oil-based primer to seal it before painting.

The paint we used was the same semi-gloss paint we were using on the cabinets, shelves, and backsplash on the other side of the room. We only needed two coats of primer and two coats of paint, but as I mentioned before, our brick walls are much smoother than traditional bricks, so I think we had an easier time than if the brick had been more textured. 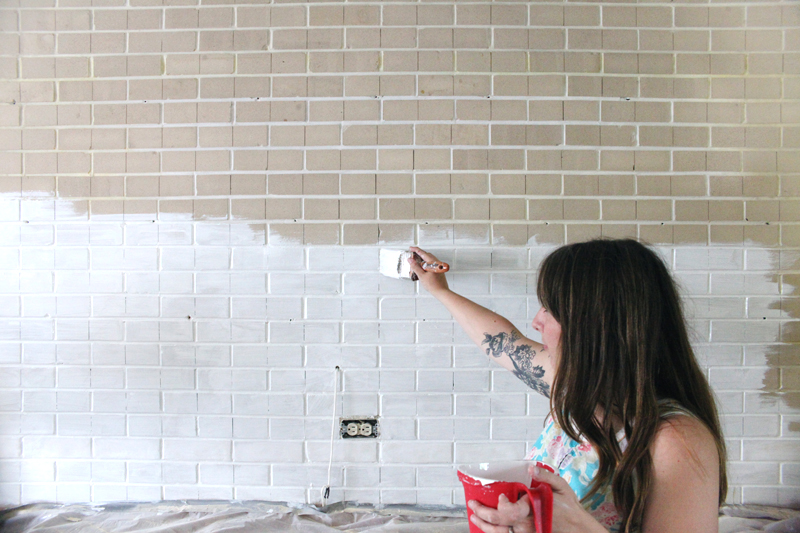 You can see we didn't bother to paint the area that would be covered with cabinets later. Waste not, want not! 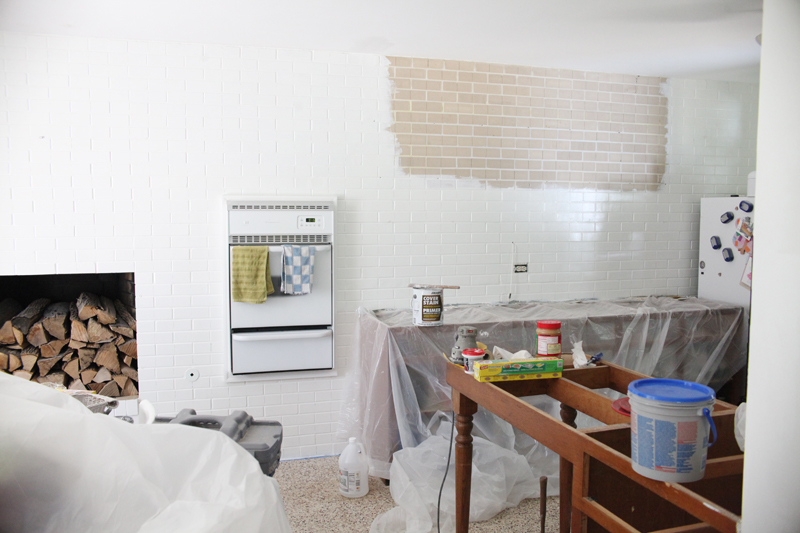 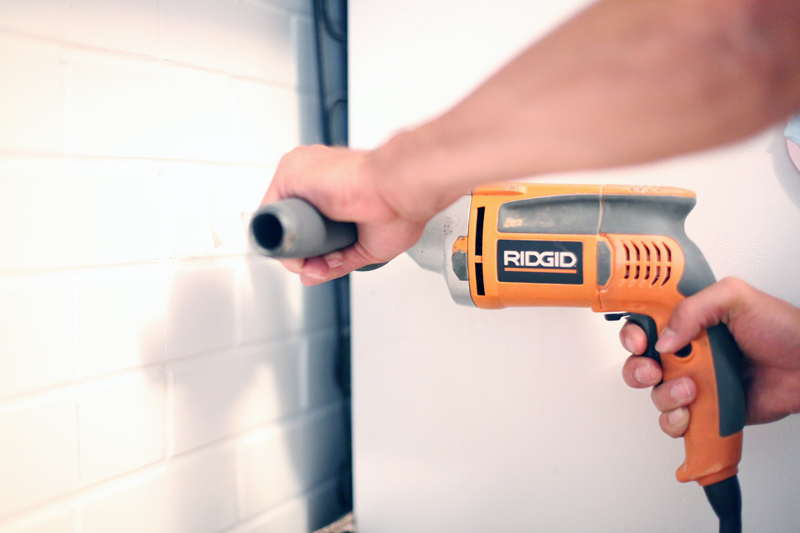 We were planning to mount a set of four Ikea shelf supports on our brick wall that might hold heavy dishes, not to mention our kitchen cabinets above the shelf! So, drilling into the brick wall was going to be a serious task.

To drill into brick or other masonry, you need a hammer drill (instead of a regular power drill), masonry drill bits, and Tapcon screws. Thankfully my dad had a hammer drill we could borrow, so we didn't need to rent one, but we did need to buy a couple of masonry drill bits. The more you drill into brick or masonry with a masonry bit, the more the drill loses its sharpness, which requires it to be replaced with a new bit. 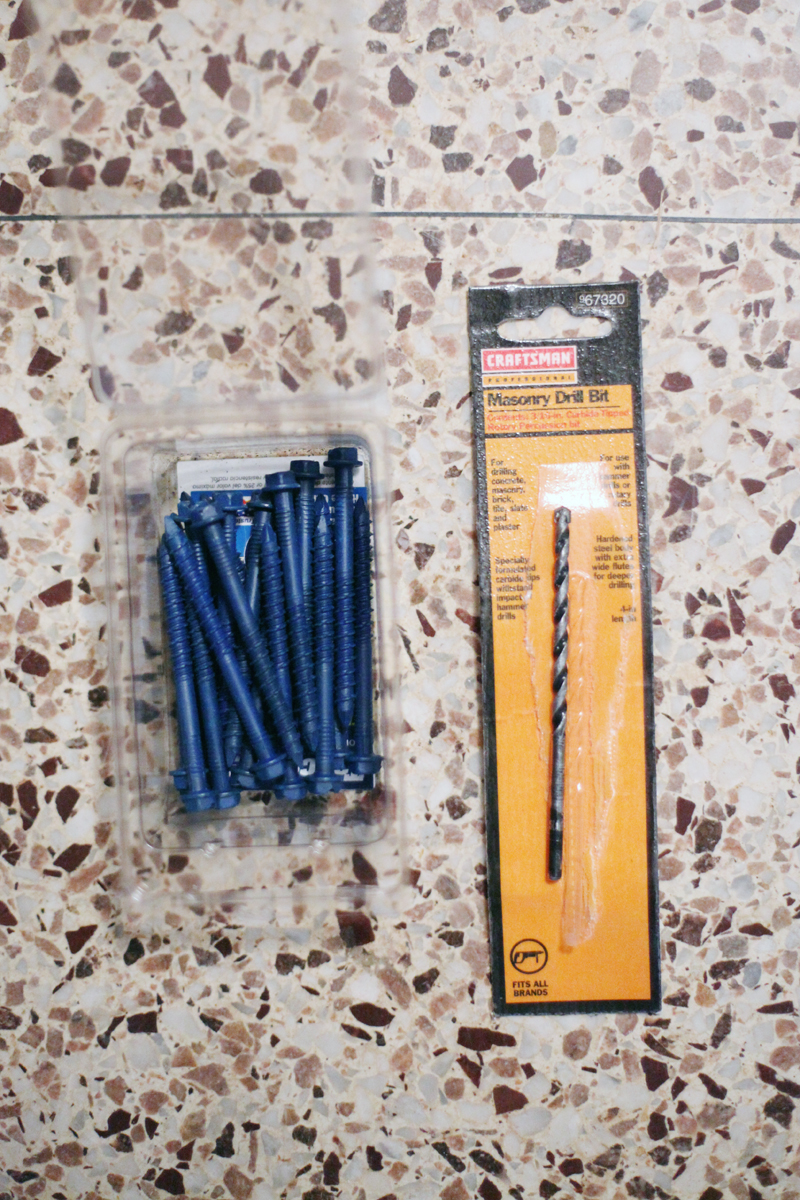 Drilling into the brick with a hammer drill requires quite a bit of muscle, and the drill bit can easily slip around if you're drilling into a slicker surface, like our painted brick. I wonder if we had drilled holes before painting if we would have had an easier time of it. We did try the duct tape trick and laid down some tape to try to keep the drill bit from slipping, and that seemed to help, though Phil said he wasn't sure if it worked or if it was just a coincidence. (It was my idea, so I say it worked!)

Technically, when drilling into a brick wall, you should try to drill into the mortar, not the actual brick. But for our shelves, I wanted the brackets to be a specific height from the cabinets, and spaced evenly apart, so we ended up needing to drill into the bricks, not the mortar. I don't think it will be a huge issue, though, since our bricks were already pretty messed up before we began this project.

We used long Tapcon screws that went all the way through the brick, and those were able to be screwed in with either a socket wrench, hammer drill, or a regular power drill. The ones in our cabinets were drilled all the way in, while the ones for the shelf supports were not, so we could slip the bracket hardware in place over the screw. 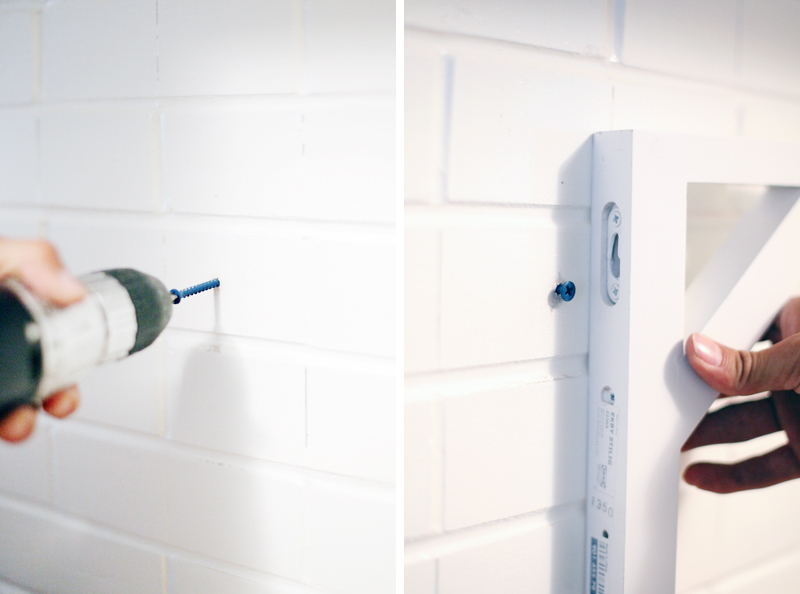 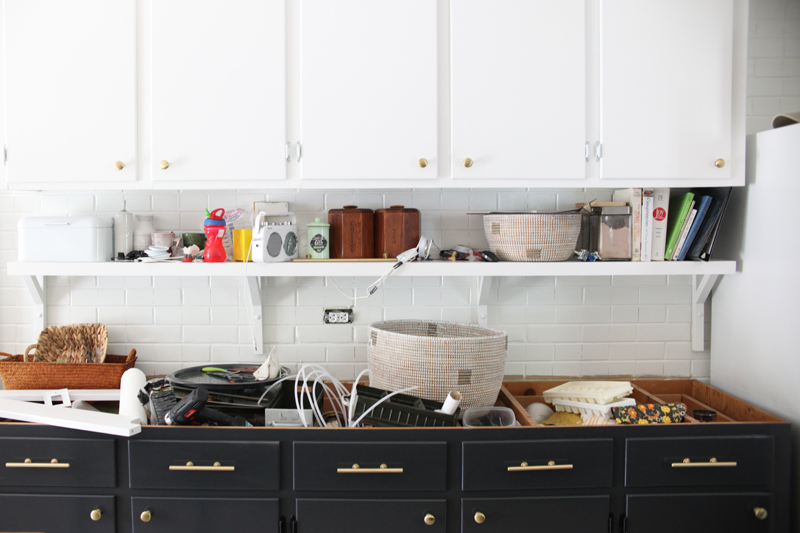 And there it is, ladies and gentlemen! Our freshly painted brick wall! I must admit, I don't feel like throat punching the person who installed the tile any more. While they forced my hand, I think I ended up winning the kitty, because gosh darn, isn't that a pretty wall? I would've never painted it if the wall hadn't been so royally messed up, so now I'm quite thankful for the whole ordeal. 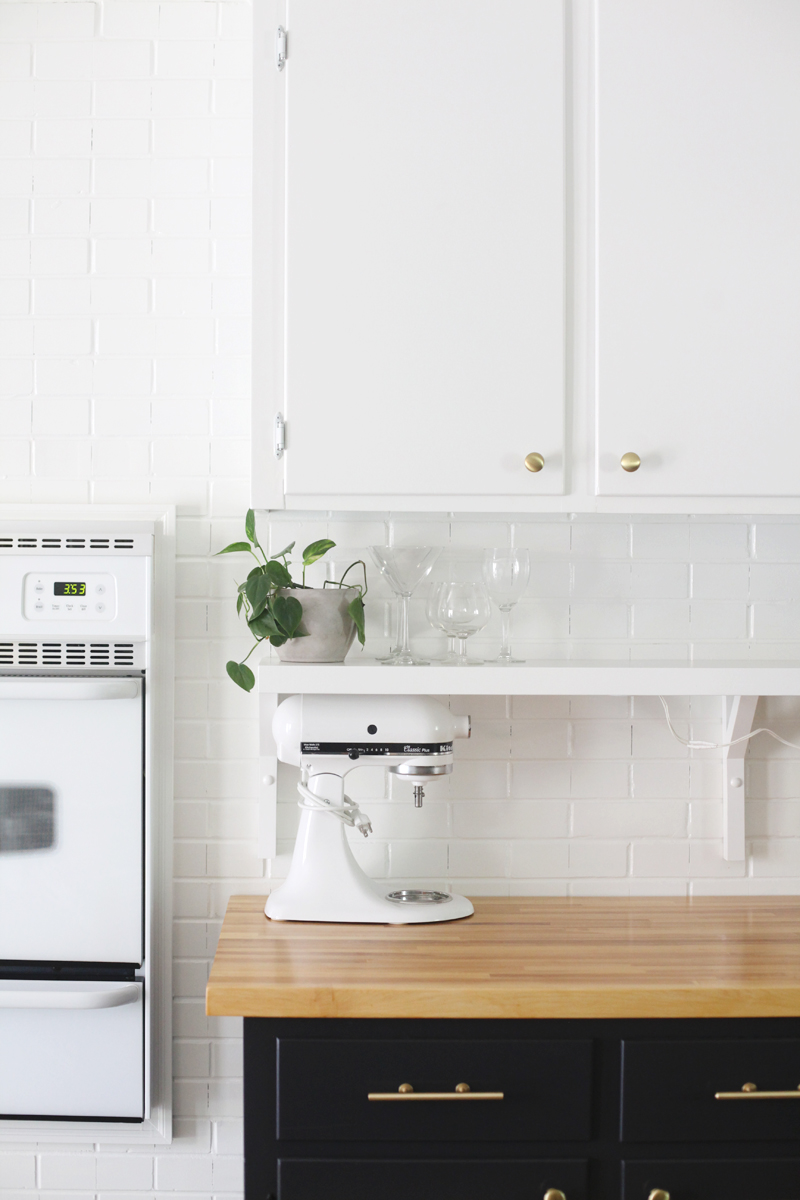 We're still working on finishing up details on this side of the kitchen, like the under shelf lights and glassware storage, but I'm so happy with how the renovation is progressing! It looks so fresh, and it's finally functional now! Before we installed the countertops, it had been three weeks without a sink or stove, so as soon as I was able, I made a batch of cookies (hence the missing stand mixer bowl). Next up? New lighting. And maybe a batch of cinnamon rolls. -Mandi