Pin
Jump to Recipe
5 from 4 votes 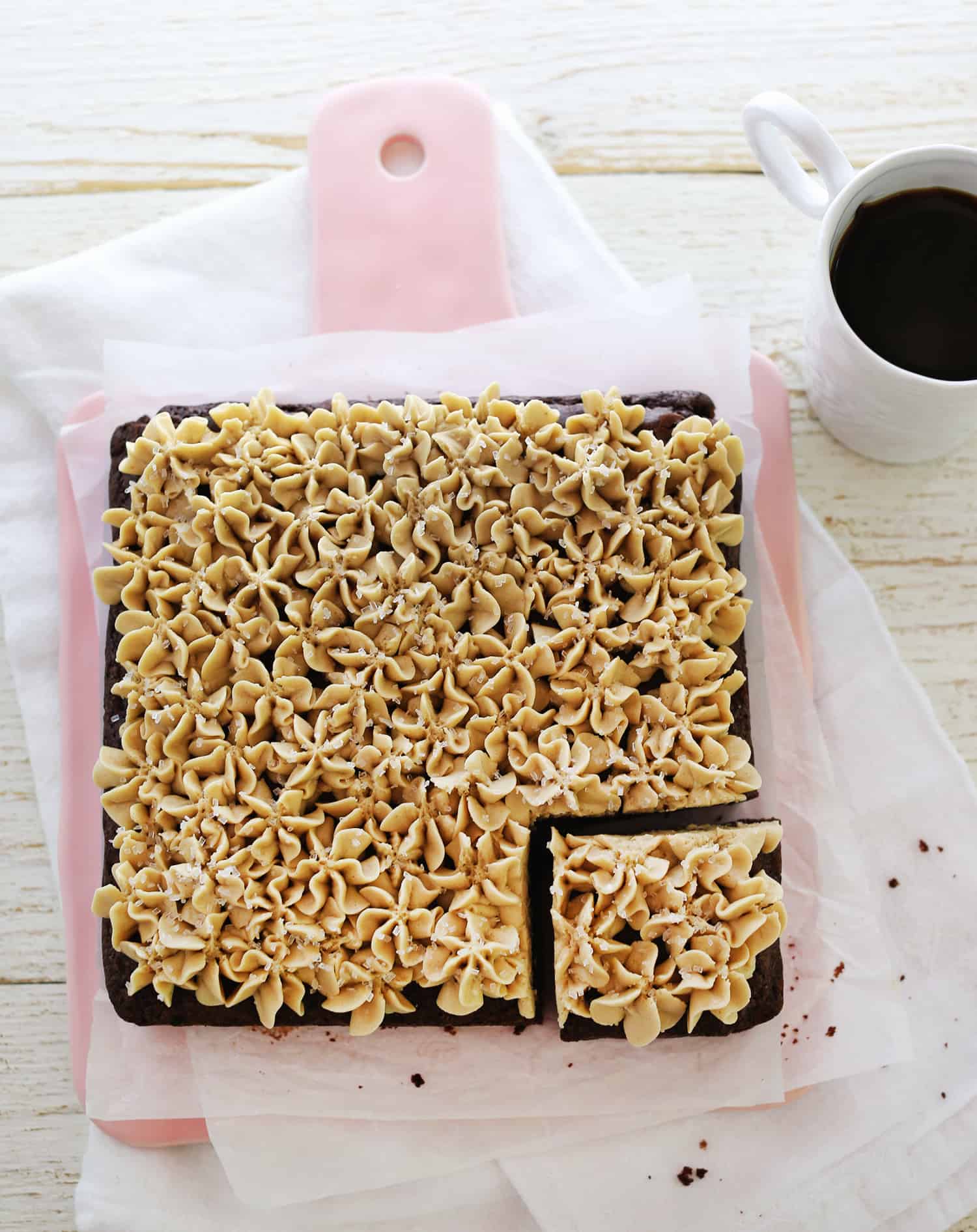 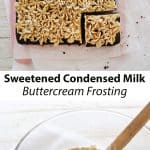 Recently, a friend of mine was celebrating a birthday, and although it wasn’t a planned party-type thing, a bunch of friends got together the day after. So of course I asked her if I could make her a cake. I love any excuse to bring a cake to a get together! There’s the obvious reasons.

Like, I too would like to eat some cake, and also it’s really fun to get to make a friend a birthday cake. But additionally I love it when I can try new recipes and do a little bit of testing with friends. It means more of my “tests” will get eaten and that means less waste, but I also get their opinions which often help make the recipes that much better.

Over text I asked her what flavors she liked (so I could hopefully make a cake that she would enjoy) and she texted back, “Chocolate!! Coffee, raspberry, pretzels … ? Is this a baking show challenge yet?” 🙂 And so I ended up making my favorite chocolate cake recipe along with a coffee sweetened condensed milk buttercream frosting with salt and raspberries on top. It was a hit! 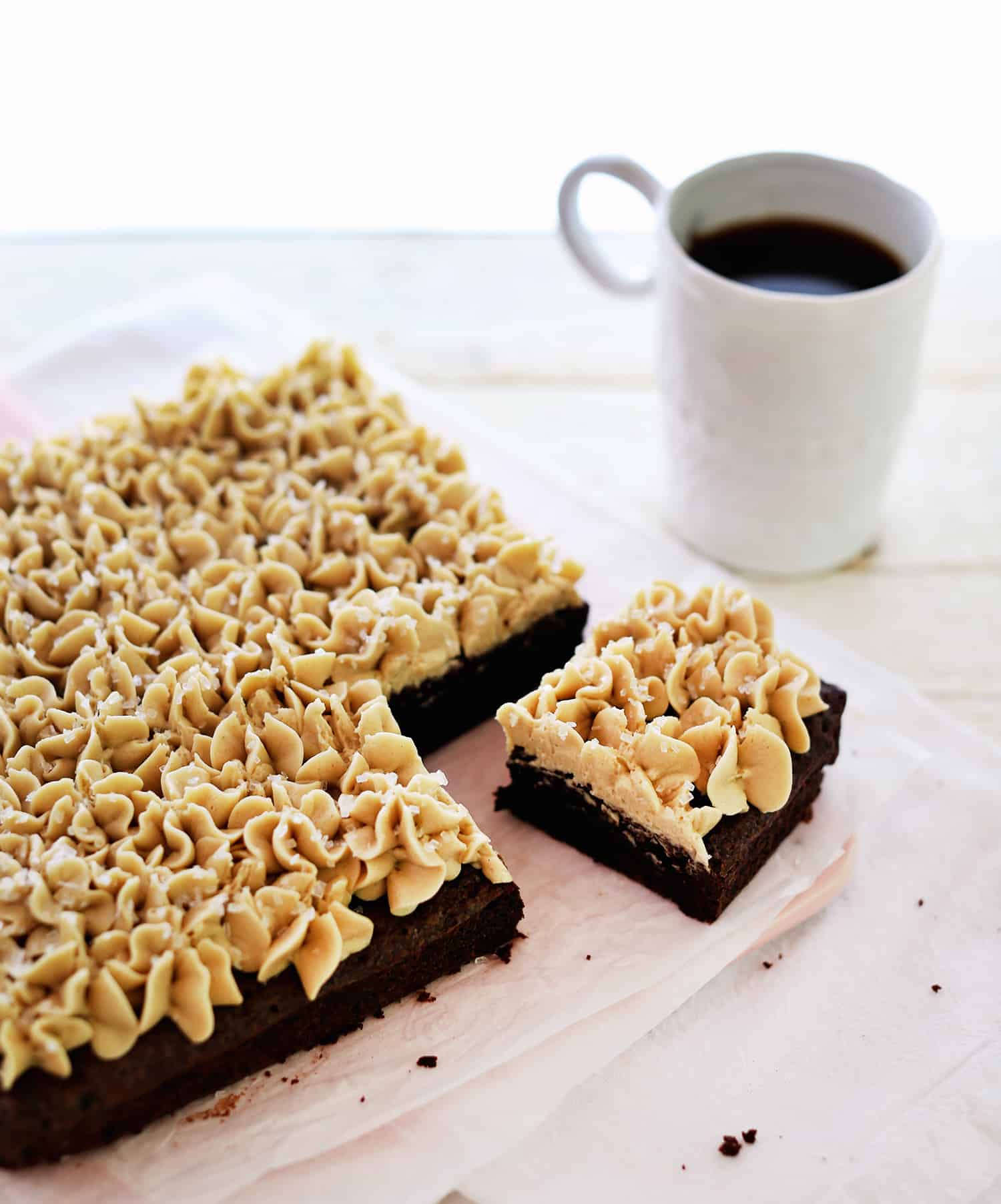 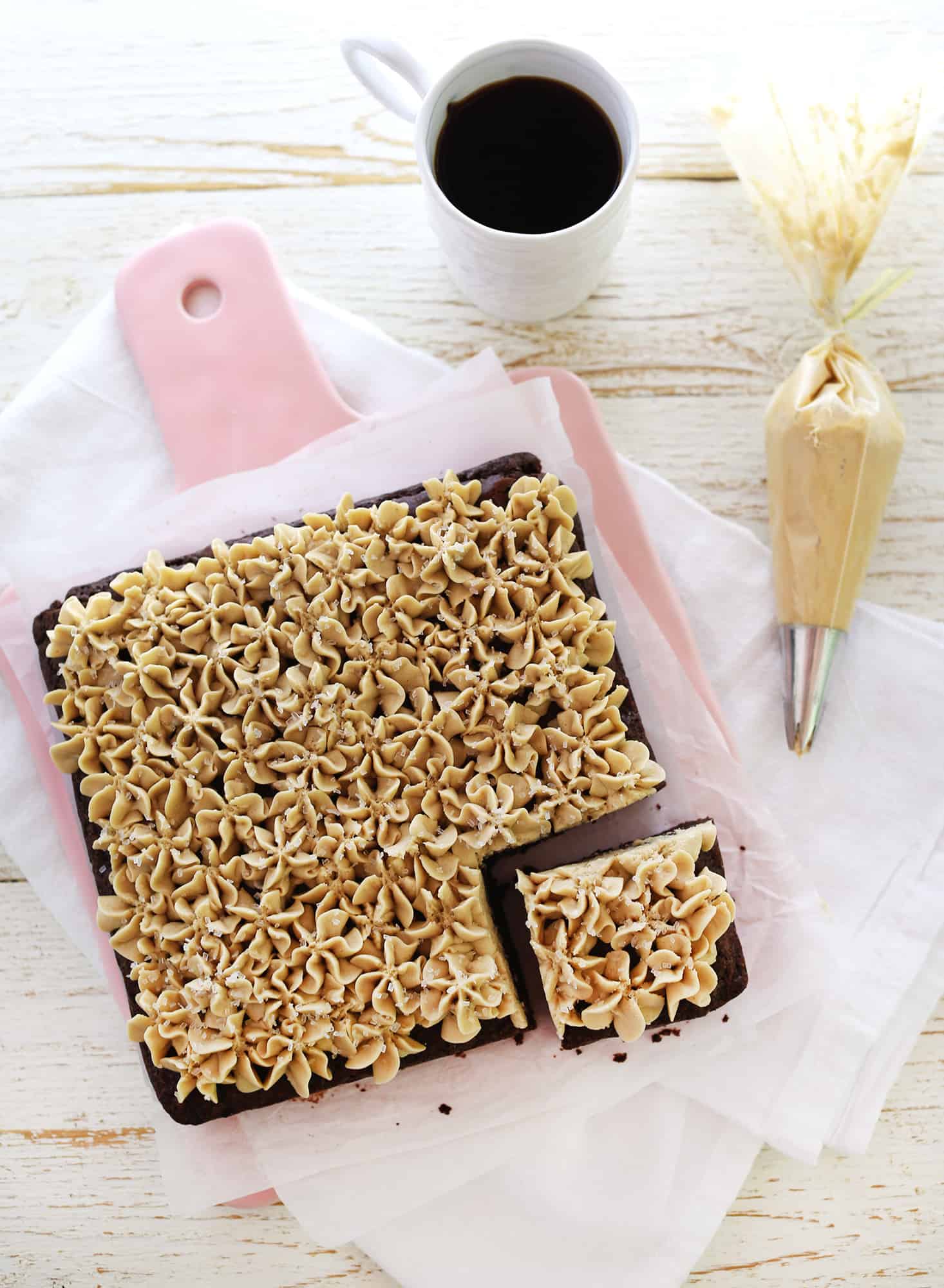 I wanted to share the sweetened condensed milk buttercream frosting with you all because it was SO yummy and although the version I’m sharing below is flavored with coffee, you could easily change this up for other flavors (see the notes).

But one thing I wanted to retest before sharing was, I thought the frosting turned out a little bit grainy the night I made that birthday cake. It tasted great, and as it was not just a food experiment but an actual cake I was making for a get together that night, I just had to roll with the less than perfect look. But I wanted to figure out how to perfect that before sharing here. 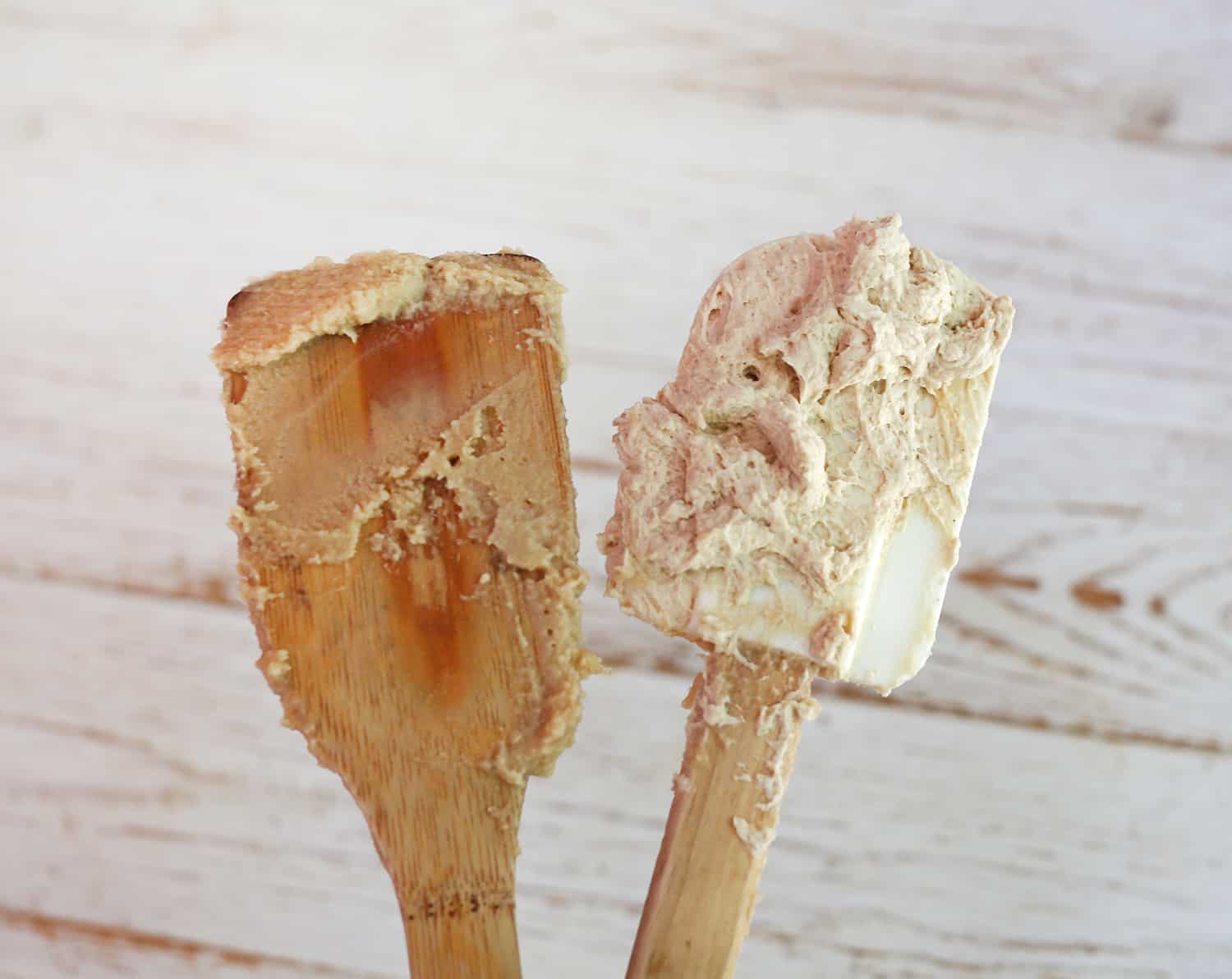 I am pretty sure my issue was really a couple things. First, I was making this during late July in southern Missouri. It’s very hot and humid, so that can affect butter (and just ingredient temperatures generally) and buttercream frostings are a little temperamental. But also I don’t think I let the coffee cool as much as it needed to.

I had much more success when I made the coffee mixture ahead of time and let it completely cool (covered) in the refrigerator so it was the same temperature as the sweetened condensed milk.

If you make this buttercream frosting, you could have a number of minor issues that result in a grainy texture. To fix grainy buttercream, first try mixing on a lower speed for 8-10 minutes. Yes, this is a long time. I have a stand mixer and I left it running for this long on the “2” speed (lower but not the lowest speed).

Above, you can see a side-by-side comparison of what the frosting looked like before and after mixing for this long. Mixing it for this amount of time will slightly heat up the butter and help to better mix (emulsify) with the other ingredients. So that plus incorporating a little air as it mixes results in silky smooth, whipped looking buttercream.

If that doesn’t work though, another thing to try is to remove a heaping tablespoon of the frosting and place in a small mug or bowl. Microwave until melted, but not hot. Then with your mixer running on low, drizzle that into the grainy frosting and whip into the silky smooth buttercream consistency you desire. 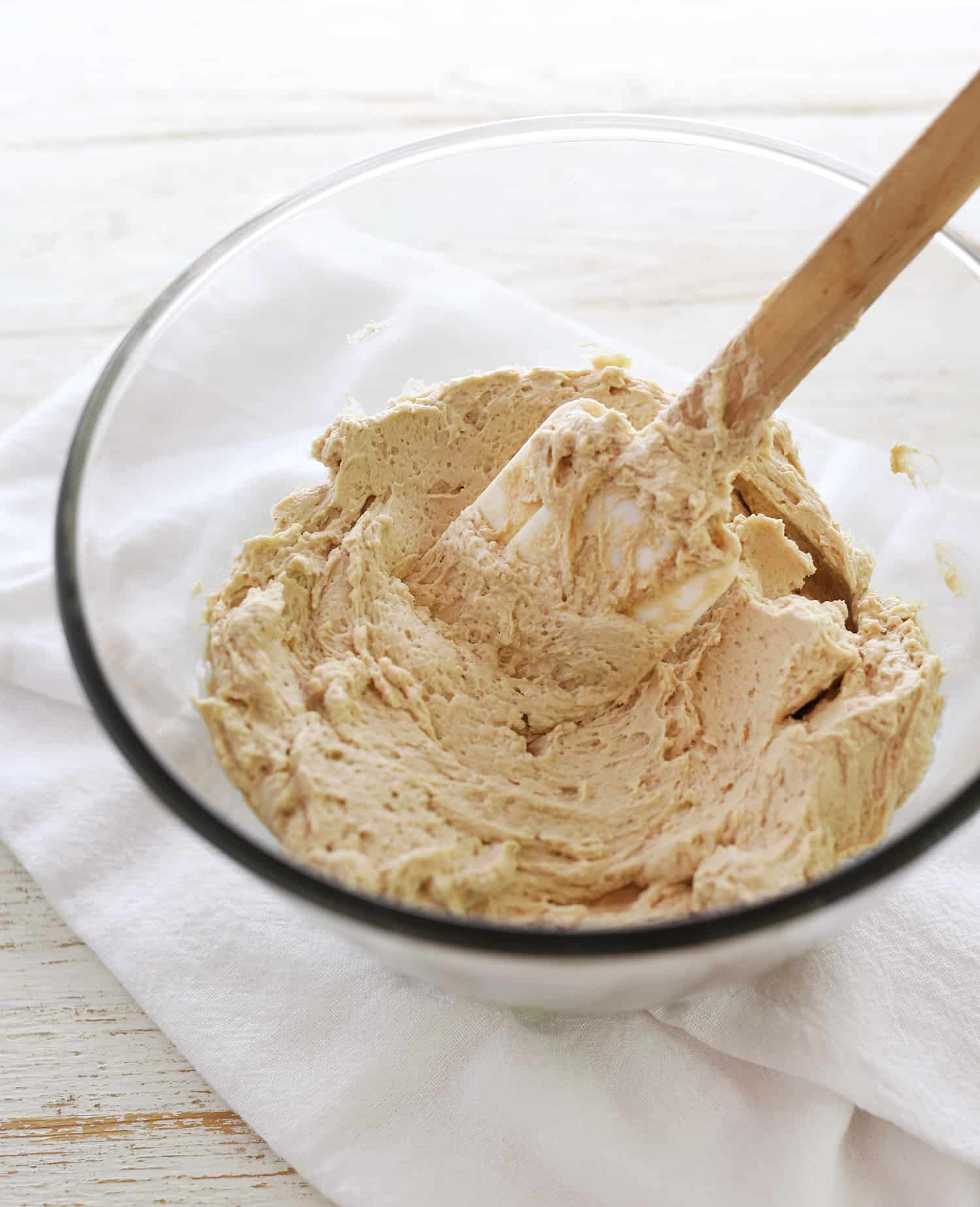 You may not need these tips though. This sweetened condensed milk buttercream should turn out smooth anyway, but if you have factors working against you (like the coffee mixture may have been too warm, or the humidity is messing with your butter), then try those tips.

This will make a sweet, but not overly sweet coffee buttercream that I love on chocolate cake or brownies. But it would be delicious on vanilla or yellow cake too. It will make enough to frost a standard two-layer cake (basically double what I used on the brownies pictured here). 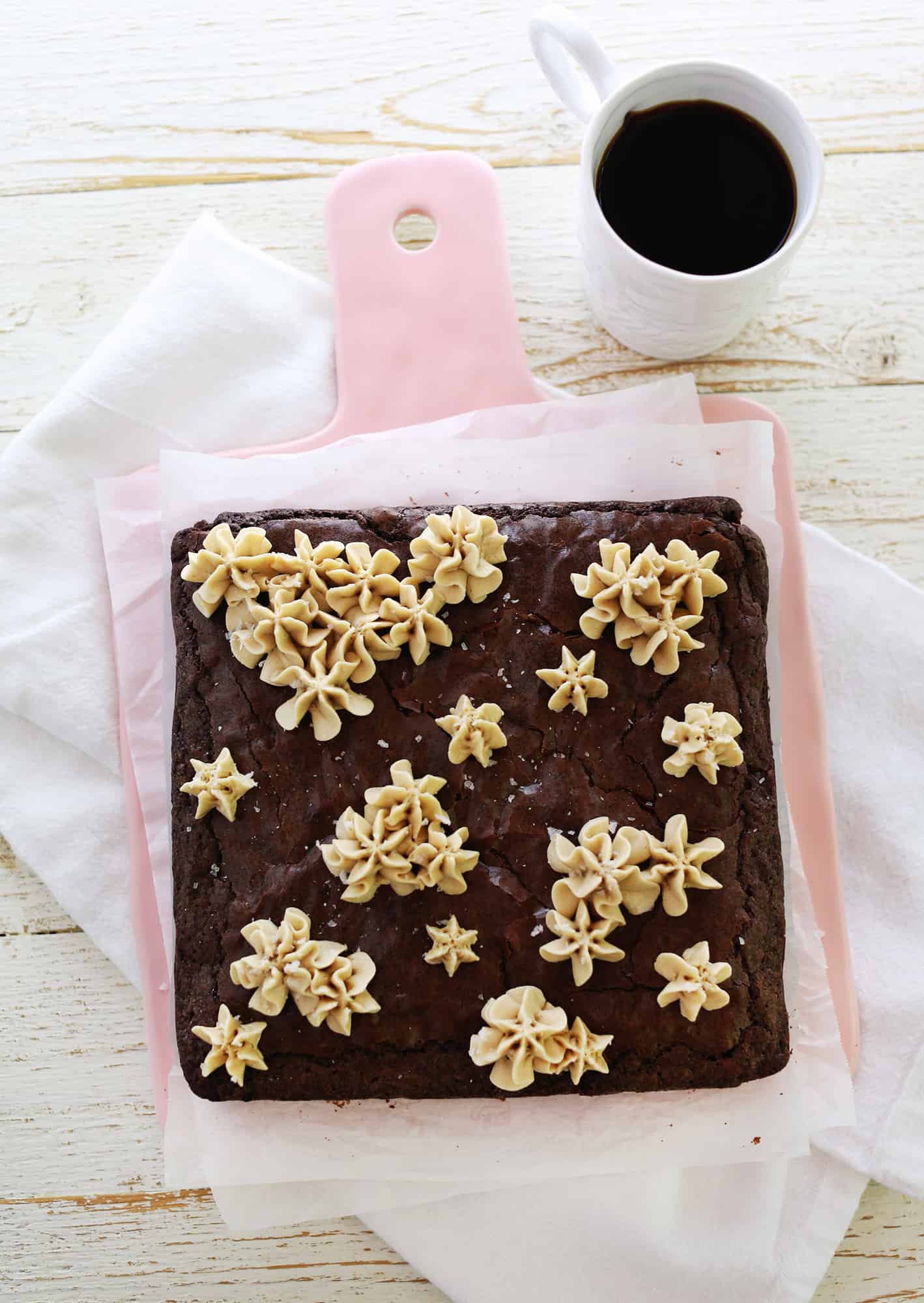 And if coffee frosting isn’t your thing, you could easily change this up, or try this peanut butter frosting. Happy baking! xo. Emma

END_OF_DOCUMENT_TOKEN_TO_BE_REPLACED

If the frosting appears grainy, check this post for a couple tips to fix this. I used a Starbucks Via Instant packet for the instant coffee here, but other brands/types will work and this may mean the 3.3 grams listed may vary slightly. If you wish to make plain vanilla sweetened condensed milk buttercream frosting, simply omit the hot water and coffee. You could add another 1/2 to 1 teaspoon of another extract to flavor it differently or try mixing in some vanilla beans to enhance the vanilla flavor. Lots of options!
Course Dessert
Cuisine American
Keywords buttercream frosting, frosting

This recipe is phenomenal! I made it in the evening, thinking I would put it on some graham crackers – oh Hell no!
It was too late to bake a cake. I put it in the fridge for the night. It was even better in the morning (I tried a little on a graham cracker.) I’m planning on letting it soften while the cake cools.

Sounds yummy, what if I want to add peanutbutter to the mix? Do you think it will work and how much should I add?

Hi, I’m making this for my husband’s birthday, and although he loves Vietnamese coffee he doesn’t like his cake too sweet, do you think this would still work if I swapped out some of the butter for drained greek yogurt?

Hi, I’m making this for my husband’s birthday, and although he loves Vietnamese coffee he doesn’t like his cake too sweet (men), do you think this would still work if I swapped out some of the butter for drained greek yogurt?

Yum! We always have condensed milk in the pantry. Thanks for the instructions.

This frosting looks and sounds so delicious! I love how you drizzled it at the top – so beautiful!

Looks terrific. Thanks for the tips regarding grainy frosting. It’s good to have those up front.

Sounds delicious. Any advice for a vegan alternative to condensed milk?

Hmm. That’s a tough one. I am not sure this could translate to vegan easily but you could experiment with coconut milk (from a can, the full fat kind) but I would probably sweetened it more if you do.

This sounds so good! I love Vietnamese iced coffee, so this would be right up my alley. I think your brownie + this frosting idea sounds like a perfect pairing!

Yes! It is kind of similar to Vietnamese iced coffee. I hadn’t thought of that.

MMM…peanut butter frosting and now coffee frosting. You are speaking my love language. Can’t wait to try it, and since I’m not great at baking, I so appreciate your remedies for grainy icing!

Oh Jesus. This is right up my alley. Adding this to my cooking/baking list for this weekend. Thanks so much for sharing, Emma!

Coffee and chocolate??? Pretty much up my alley too (clearly). 🙂 Enjoy!

So when I first saw the photo, I thought this was a pillow tutorial! (Not a bad thing.) Thanks for alerting me to a new way to make frosting. Oh, and aesthetically, I like the last photo (partially frosted) the best.

Ha! Actually yeah, this would be a cute pillow. I’d buy that.

Oh my, this sounds heavenly! Just in time too since my boyfriend’s birthday is coming up and I’ve decided to bake a cake for him! 😀