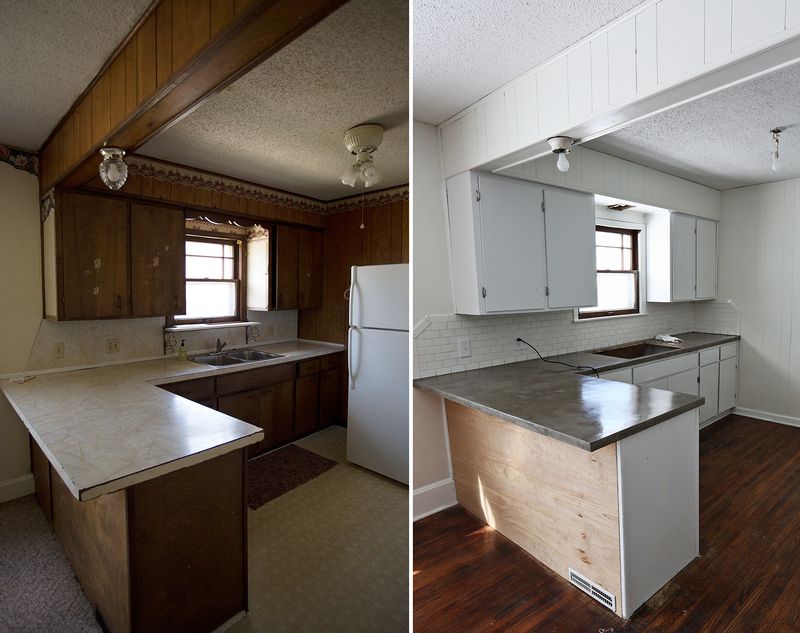 Over a year ago Laura did a countertop feather finish project. The results were such a success and they’ve held up well, so we decided to use a similar method in our HFHS kitchen. Plus we wanted to keep the counters as neutral and inexpensive as possible since we don’t know who the lucky new owners will be (and we don’t know their tastes). The gray finish provides that neutrality and the whole thing cost less than $200! 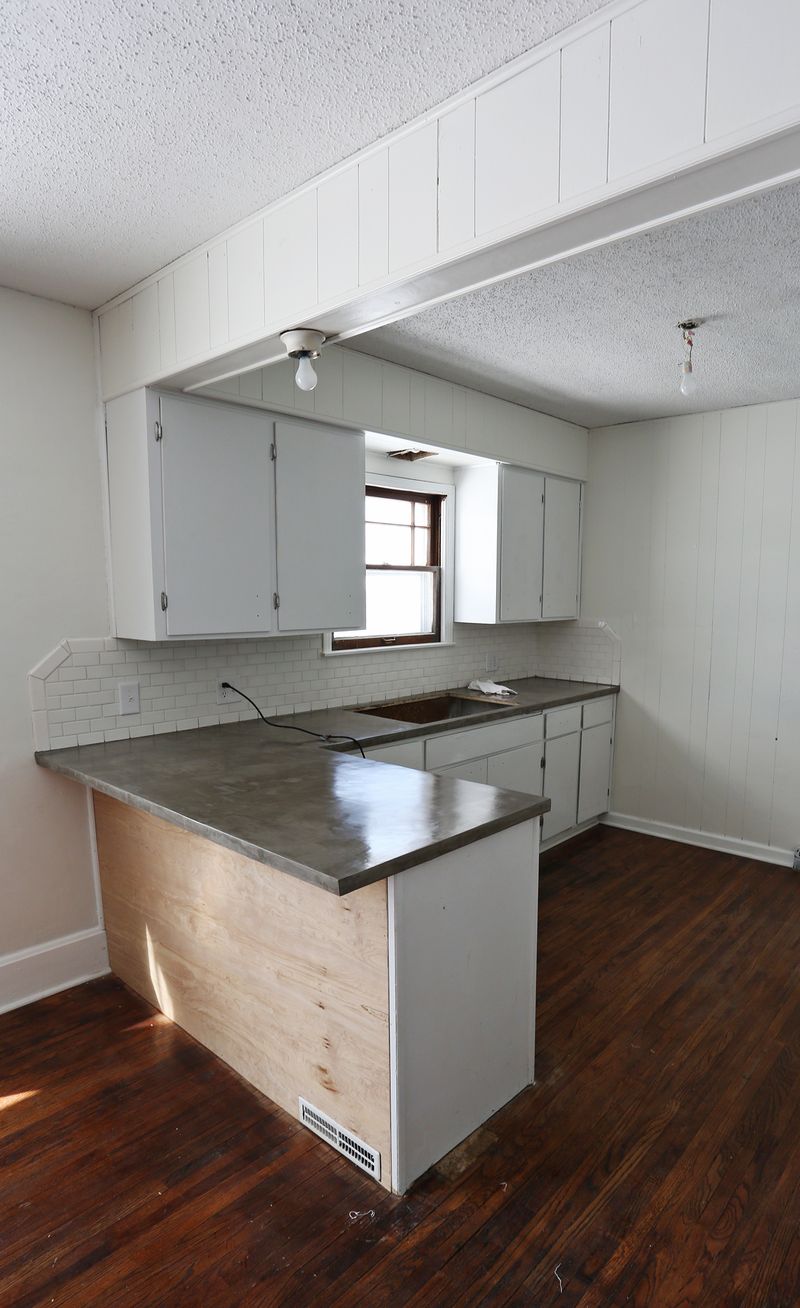 I used a couple different methods, tools, and products than Laura, so I’m going to share those with you.

For the HFHS counter, we had our contractor replace the old worn out formica counter with two layers of 3/4″ plywood. Since the feather finish drys so quickly and uses such a minimal amount of water, I didn’t worry about putting down any seal or backing layer. The two layers of ply provided ample stability. Although I did add some bracing to the front lip where the sink was going for added strength. I taped off the backsplash about half an inch up from the counter surface. 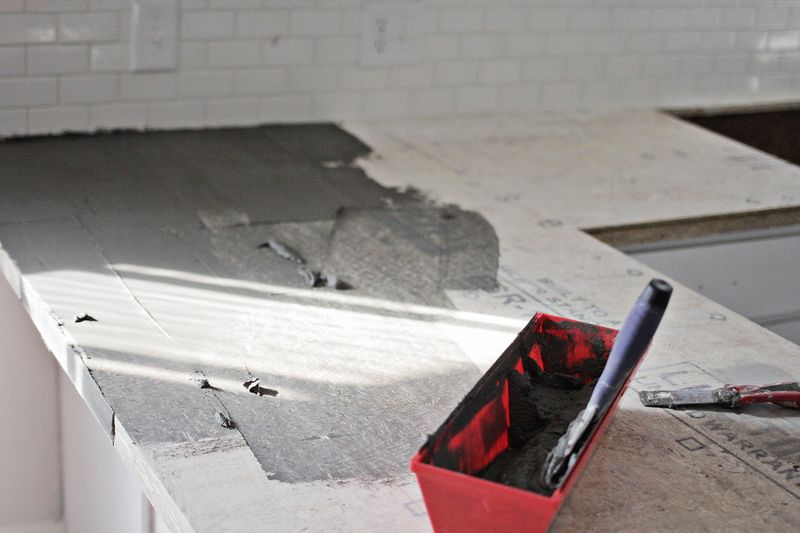 Then, I used basically the same process as Laura. Instead of using the Ardex brand feather finish which had to be ordered, I used the Henry’s brand feather finish found at our local hardware store. It mixes the same, with the ratio of 1:2 (water to powder.) At first I thought using a mudding pan would work for mixing, but I quickly switched to the temporary buckets. (Should have just followed Laura’s directions there.) I applied about five coats of the feather finish, making sure to keep the surface as smooth as possible. In the previous post, the counters have a satin, textured look, but I was hoping to achieve a smooth glossy surface. After I had about five coats applied and it was all set, it was sanding time. 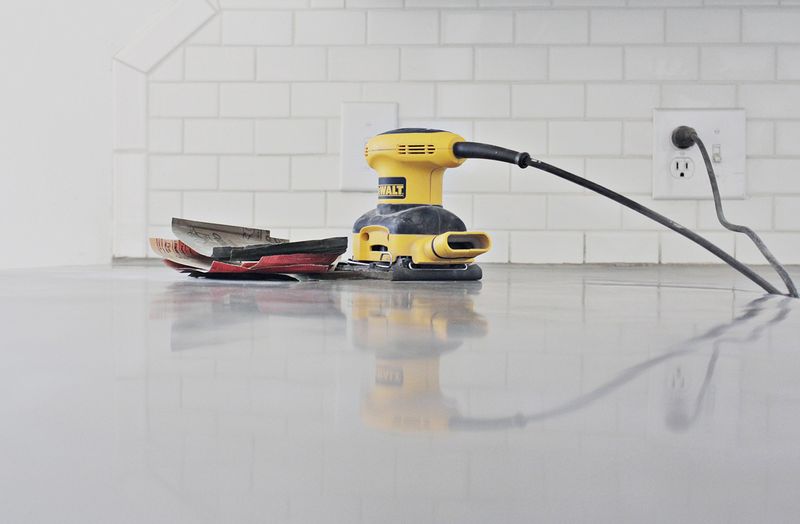 To achieve the reflective surface, I went through a bunch of sandpaper. I used a prograde product, and I could tell the difference in sanding instantly. The paper was more durable (almost rubbery) and held its grit longer which produced a better sand. Invest in the good sandpaper! I started with 80 grit and moved through the ranks after going over the entire surface— 80, 120, 200, 500, 1500 and ended with 2000. Observing the surface transform from gray to reflective was worth all the dust and elbow grease.

We wanted a food-safe seal, so a I applied a product by Ghostshield called Countertop Seal 660 (real catchy name.) It’s a bit pricey at $70 for 16oz, but it works great. I applied four coats, using only about 10 oz. I mixed as directed, then covered the container after each use. I tested the finish by dripping some water over some areas and letting it sit for about 5 minutes. The water just beaded up on the surface, no penetration at all! Sweet.

Then it was time to wax. I applied a concrete wax by CHENG using a $5 drill mounted wax kit. It can be applied by hand as well. I’m not sure if I like how the wax ended up as I don’t have anything to compare it to. I wasn’t impressed with the results, which were a bit streaky and sticky. Steel wool did help with the streakiness (0000#). Ghostshield does have a wax that you can buy in conjunction with their sealer. I’m curious how that goes on in comparison.

Overall, I am happy with how the counters turned out. They look good, are durable, and didn’t break the bank. If you don’t want to go through the process of pouring a concrete slab, this is the next best thing! -Josh