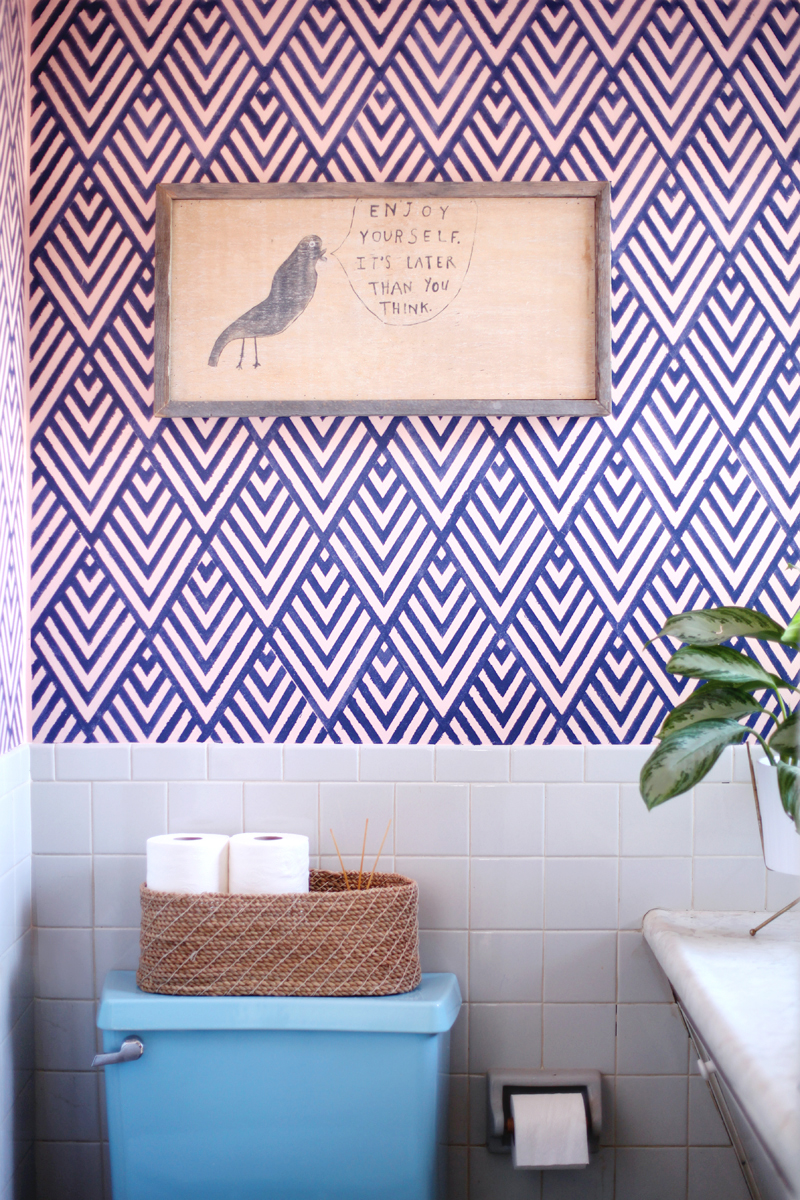 Hi! It's Mandi from Making Nice in the Midwest. When we moved from an apartment to a house, the first thing I wanted to do was put up wallpaper. As odd as it sounds, I ended up being grateful that the wallpaper I wanted was pretty expensive, because saving up for it allowed me time to mull over my decisions and come to terms with the fact that buying and installing wallpaper probably wasn't a good idea for someone like me who often changes my mind and decor.

Instead of wallpapering our little powder room with the crazy blue toilet, I decided stenciling was a more realistic option. It only cost a few dollars for stencil supplies and the cost of a quart of blue paint—totally doable! It certainly wasn't a quick job by any means, but I just love walking by that little room in our house and peeking in at the fun pattern on the wall! If the novelty wears off someday, all I'll need to do is cover it up with a couple of coats of paint—no wallpaper removal required! Perfect.

Check out my tips below for getting the look of wallpaper in your home with homemade stencils and paint! 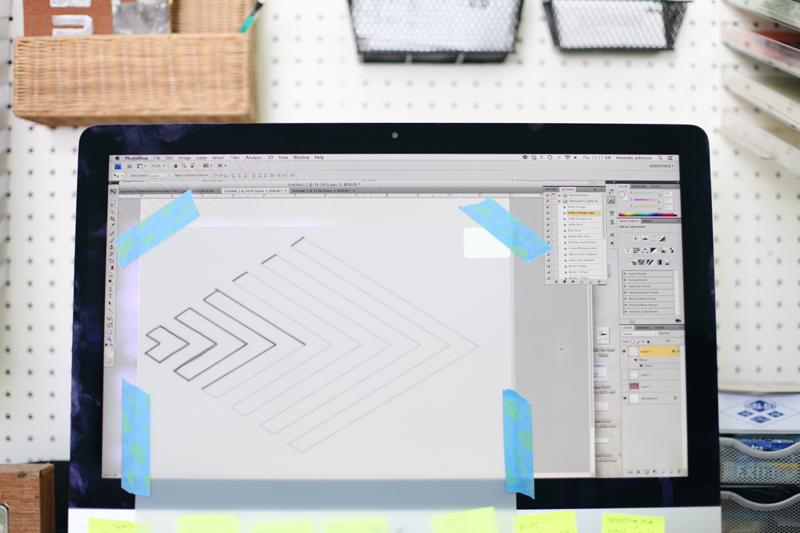 Tracing Your Stencils: I had found an antique art deco pattern I loved via Pinterest and ended up tracing around the edges of the design in Photoshop. Of course, my printer was out of ink, so I used painter's tape to attach my stencil sheet directly to my computer screen and traced over the pattern with a ruler and a Sharpie. Don't worry—my screen wasn't damaged in any way! I did not press hard, and the painter's tape came off cleanly.

To create your own stencil, you can search online for free domain images or creative commons images that are available for personal use. You can't sell these, but you can use them for your personal creative projects in your own home. Or you can purchase an image from somewhere like Shutterstock or Istock and use one of those. If you are using a creative commons image, you can just print the image and trace over it, or if you have absolutely no access to a printer, you can enlarge the image and carefully trace over it directly on your monitor, like I did. Just for heaven's sake, be careful tracing on your computer screen! How devastating would it be to have a computer monitor with Sharpie marks on it? (I feel like I probably shouldn't be telling you to trace something on your monitor… So, maybe just do as I say, and not as I do?) 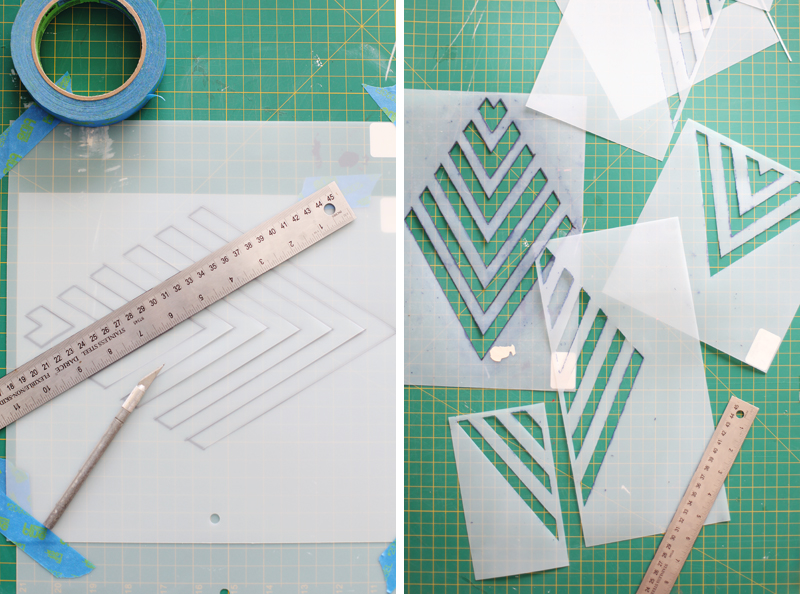 Cutting Your Stencils: After tracing the image onto my stencil sheet, I used a steel ruler and a craft blade on top of a cutting mat to cut out the inside shapes. I decided not to leave any connecting points in the corner of the V for security, because I would be using a stencil adhesive when painting the wall.

Make sure the borders of your stencils that will be butting into corners are no wider than 1/4", or you may have an unappealingly large border on the wall around your design. You can use painter's tape on the edge of the stencil to protect the wall, which I'll talk about more in the tips below. 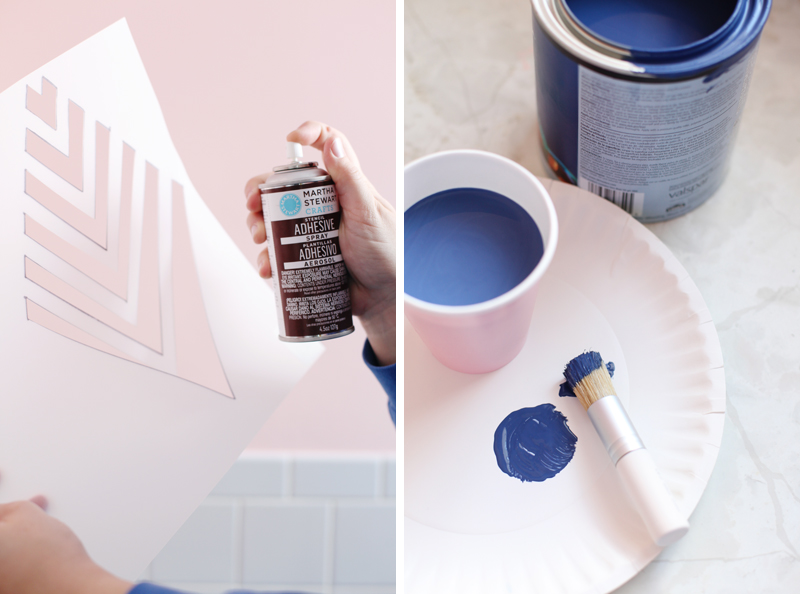 Preparing the Stencil: Spray the back of your stencil with a light coat of repositionable spray adhesive or stencil spray. Do this about ten inches from your stencil and spray in a well ventilated area. I took this photo inside, but I sprayed outside so I wouldn't get sick from the fumes and so the stickiness wouldn't get all over my bathroom. Let it dry enough to be tacky before you stick it to the wall. Also, make sure the undercoat of paint has cured before sticking the stencil to the wall, or it could possibly peel off the paint!

Paint Handling Tip: I poured some paint into a disposable cup and worked with that since it was just easier to hold than the entire quart of paint. I also used a paper plate for dabbing the excess paint from the stencil brush, but you can also just wipe it on the edge of the cup, which may be easier when you're standing on a ladder (or a toilet seat!) to reach the high parts of the wall.

Where to Begin: Begin painting in the most visible corner of your room. I began in a left to right, top to bottom fashion, but after finishing the first wall, I realized that top to bottom and then outward horizontally would be best. This is because the corners of the walls are less forgiving than the ceiling line. If your stencilling doesn't end up exactly parallel with your horizontal lines, the eye forgives (see how my finished pattern isn't parallel with the top edge of the tile), but if it isn't parallel with the vertical corner of the wall, there will be a glaring gap between the edge of the design and the corner of the wall. SO—top to bottom, then horizontally out from the corner. 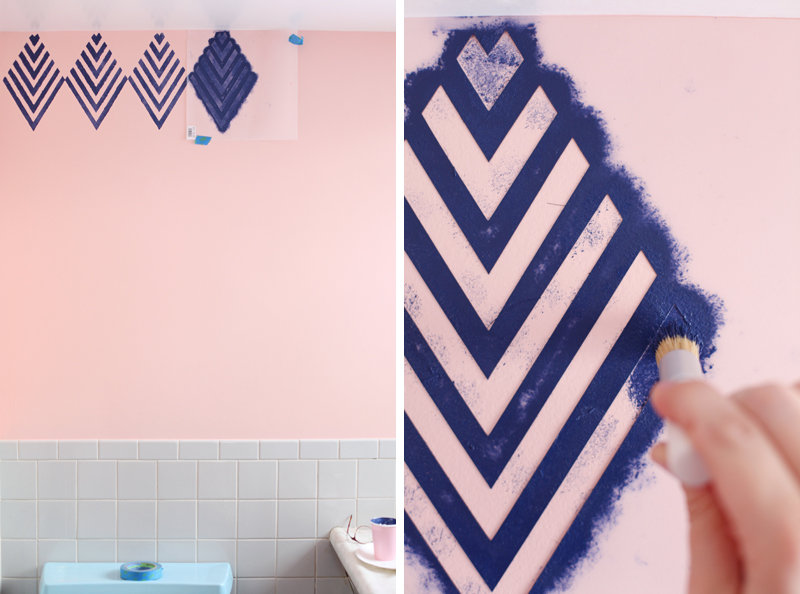 Don't overload the stencil brush. Make sure your stencil brush isn't overloaded with paint before you put it to work. You can load the brush to begin, but wipe off the excess paint on the edge of your cup and dab it on a paper plate or something to make sure it isn't super wet with paint. If it's too wet, the excess paint will seep below the stencil, and that paint will be dragged along each time you move the stencil.

Paint the soon-to-be overlapped area first. When you move the stencil after painting, there's a chance that part of its border will overlap an area you just painted. Plan for this by painting that area first so that it has a chance to slightly dry before overlapping it when you move the stencil to the next area. Also, don't press the overlapping portion of the stencil into place around the wet paint—just dab it lightly with the brush instead. My stencil design didn't give me too much grief with overlapping wet paint, because when I went from top to bottom, none of the stencil overlapped the previously painted designs. Left to right stenciling did slightly overlap, though. 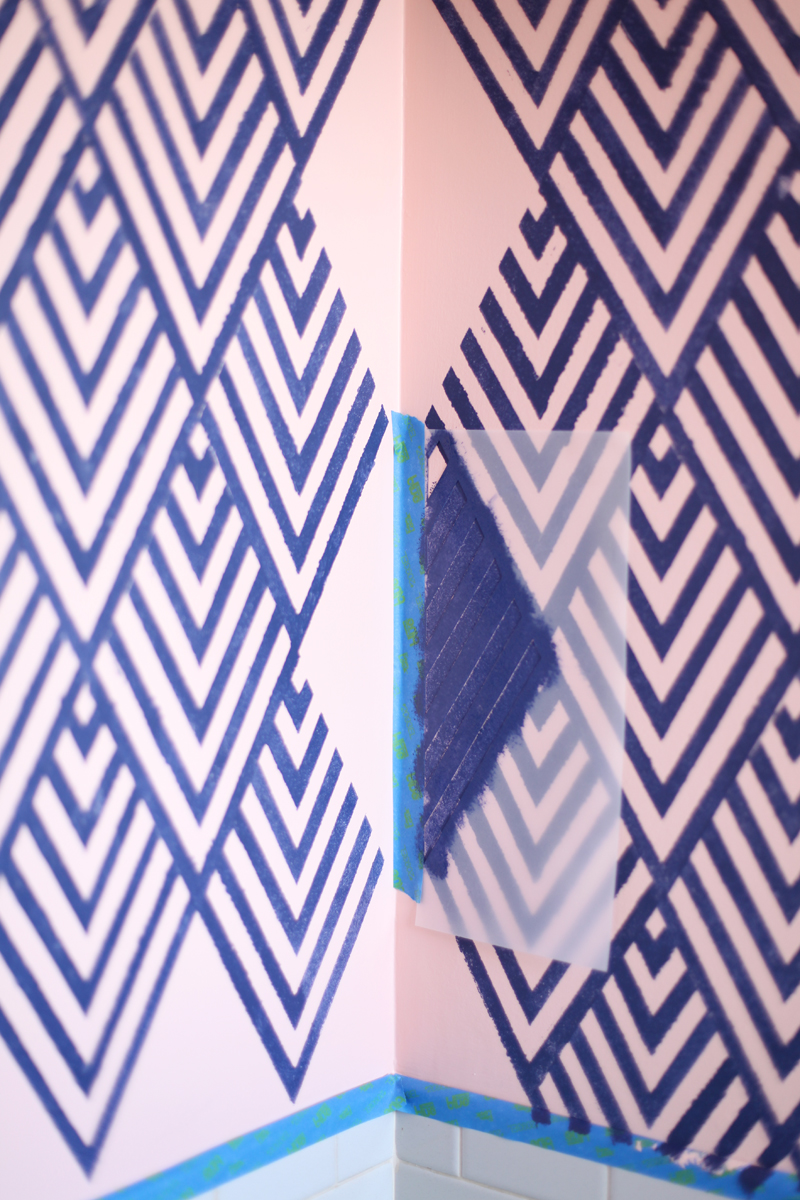 Tips for Repositioning the Stencils

Don't drag a wet stencil. There's a good chance that a little bit of paint did seep underneath the stencil while painting, so be careful not to drag the stencil. When putting it into place, keep it away from the wall until you think you've got it in the right place, and then inch it closer and closer before sticking it onto the wall. Try not to drag the stencil, or you might drag paint along with it.

Stick the stencil to the wall by using a dry brush. It can be difficult to get the sticky stencil onto the wall when the front of it is covered in wet paint. You don't want to get paint all over your hands, so the best way to do this is to hold the dry part of the stencil with your hands and use a relatively dry brush to tap the stencil into place so that it will stick to the wall. Tap all around the stencil with the dry(ish) brush to get it to stick everywhere before you paint in the openings with a wetter brush.

Periodically wash the stencil. Paint will eventually build up and make the stencil difficult to work with or even cause bits of paint to peel off and impede the stencil's opening. After a few rows, you may want to wash the stencil and start fresh. Make sure it's completely dry before beginning again. 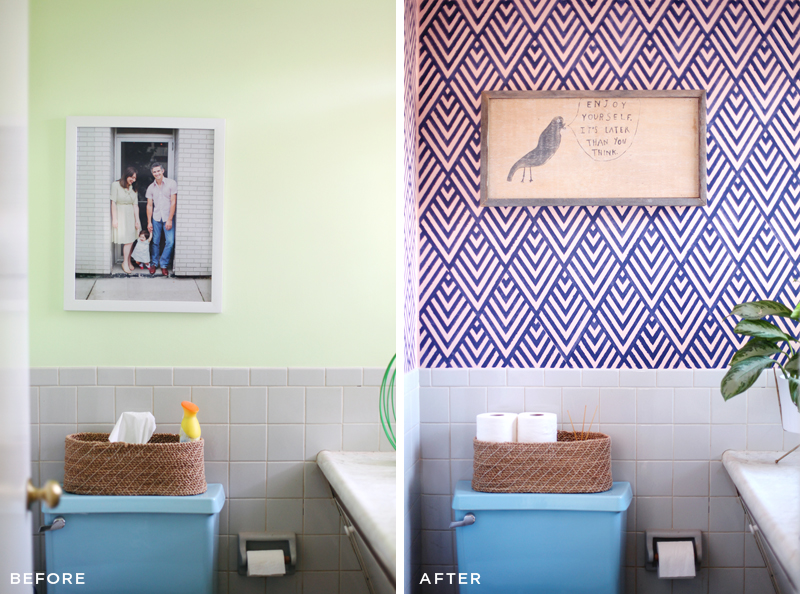 Things to Consider Before Stenciling

Stenciling takes time. I know putting up wallpaper isn't the quickest task in the world, but painting a close-knit pattern like this takes a lot of time and patience. I spread this job out over three days, and this was just the top half of a tiny powder room—and I didn't even paint all four walls. Having more people to help would be nice, that's for sure, but when working, you may want to take several breaks for your own sanity. I found that the longer I worked, the sloppier I got. So I made sure to break up the job between other tasks around the house.

Stenciling around wall fixtures is very difficult. I decided not to paint the wall that has a window, two sconces, and a mirror, because I would have had to cut small portions of the stencil pattern to go between the small spaces around the fixtures, and I just decided that enough was enough. I may change my mind on that and finish the whole room—Who knows? But I'd definitely say this is a paint job for a feature wall or in a space without many impediments.

Stenciling is not perfect. If you can't stand little imperfections in a design, then stenciling is not for you. Paint will seep behind the stencil, you will drag a little paint from time to time, and your hand may even smudge some wet paint once or twice. I love the handmade look of stenciling, but if you like crisp and precise designs, you may want to think twice about stenciling. You can't achieve perfection when stenciling an entire wall—so it's better for your sanity's sake if you just don't go into the job expecting that. 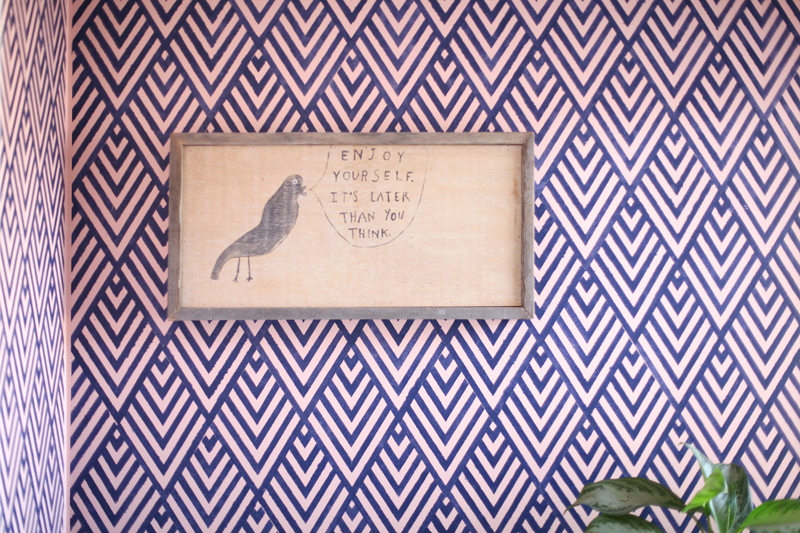 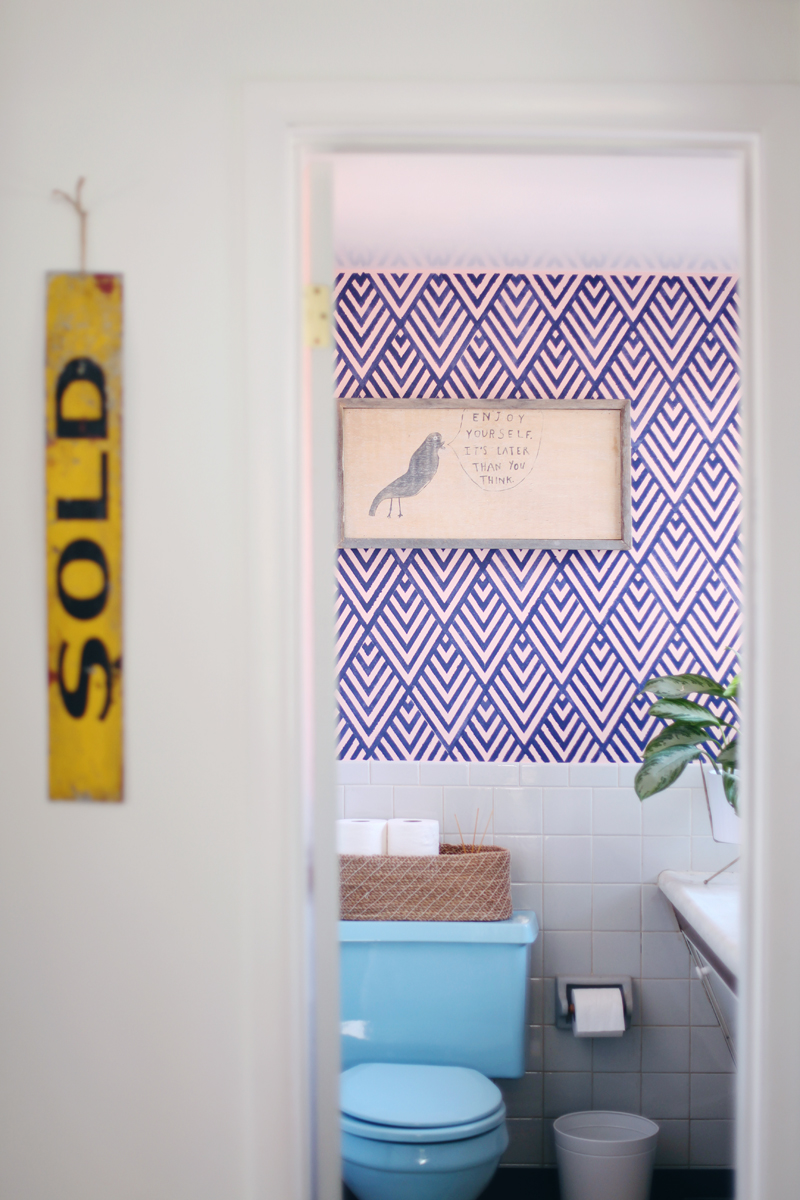 I'll admit—halfway through this job I wondered, "What have I gotten myself into?" But then I turned on a Motown Pandora station, opened up the windows for the first time in months, and really enjoyed the therapeutic aspect of using paint alone to dramatically change the look of an entire room. Sure, it may just be a space for (ahem) powdering one's nose, but that doesn't mean this little bathroom can't be the grooviest room in the house!