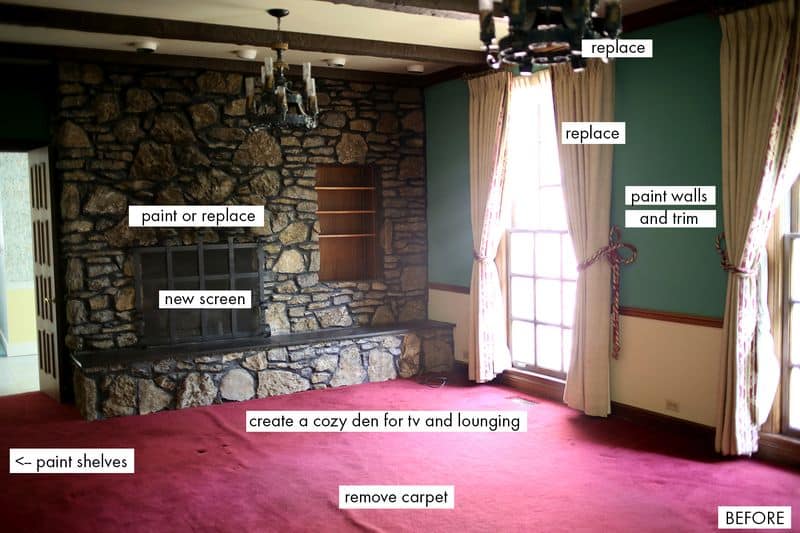 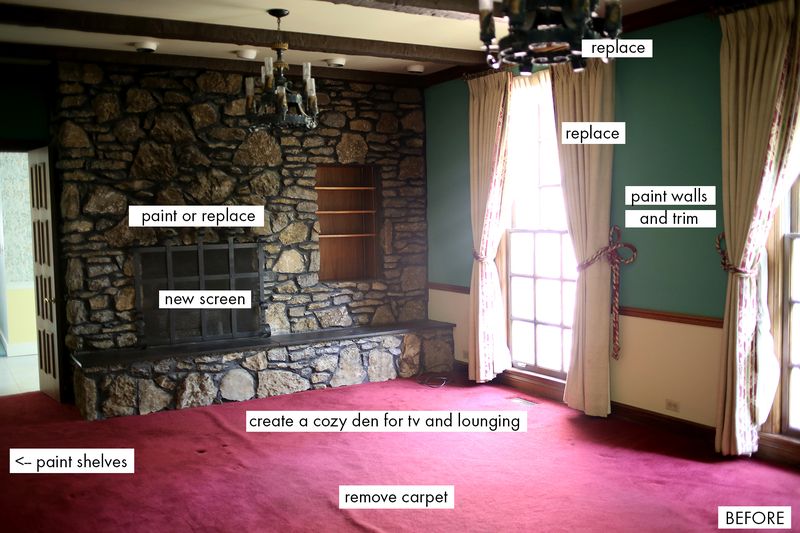 Of all the things that initially drew us to this home, this room was not one of them. In fact, the dark stone fireplace was such a deal breaker to me that I didn’t know if I could ever love it and originally wanted to rip it out and start over (my husband talked me out of that).

This is the second room you see when you come into the house. The first is the “formal” living room that’s immediately after the entryway. Then there is a hallway to your right and this room to your left.

Of all the rooms in the house, it is by far the darkest. There is a large magnolia tree just outside these windows that blocks a lot of light.

Our original checklist of items to change was— 1. Paint or replace the fireplace. Like I said above, Jeremy talked me out of replacing it. He said to paint it white and see if it would grow on me. I’m so glad he did because it HAS grown on me. And while it’s still not what I would choose if I was building from scratch, I really like it now. 2. Paint walls, trim and shelves. We were VERY lucky that most of the house came with white trim, which is my preference. So we only had to paint the trim in a couple rooms. This was the most tedious because of the double doors and bookshelves. I know a lot of people wouldn’t paint those bookshelves. They really were beautiful as they were (and very hard to paint because of 8 zillion coats of furniture polish applied over the years), but for us, white was the right choice. And it really did open up and brighten the space. By the way, we did all of the painting ourselves to save money (and we’re not done yet!) 3. Removing that carpet. We weren’t a fan of any of the color choices in this room. So goodbye red carpet! One of the first things we did after I snapped these photos on closing day was pull up the carpet to see what was under there. 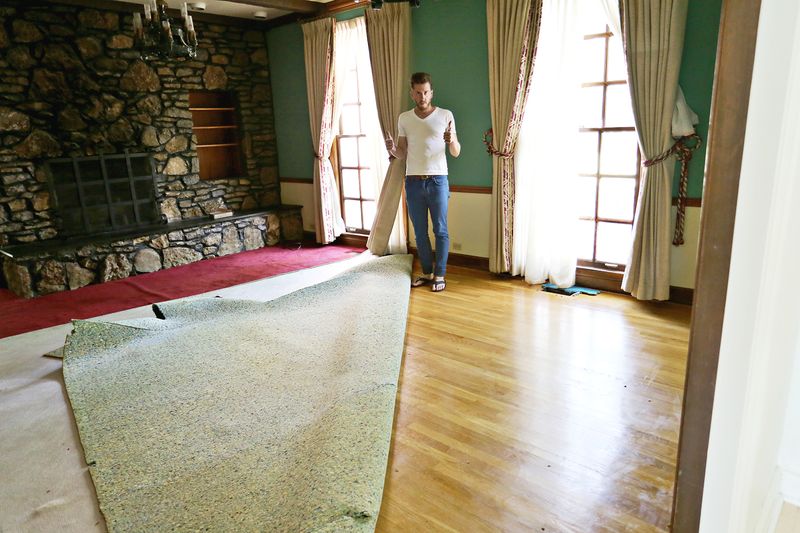 We were happy to find undamaged wood floors. That’s always the BEST feeling after buying an older home. This house was built in the 70s, which is a gray area for original hardwood (meaning it won’t always be under there—you just never know until you pull it all up and check!). The color was very yellow, so we realized we’d want to restain them, which we were OK with.

At the time I was considering either WAY light or WAY dark wood stain. We went with the light and have loved it SO much. 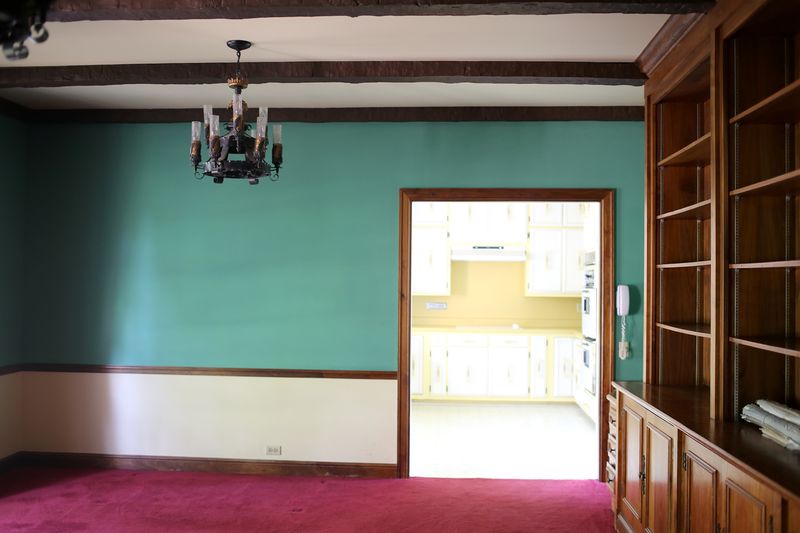 Besides that, it was just a matter of changing the finishes.

Even though this room wasn’t my favorite at first, I was pretty sure we could make it what we wanted eventually. This room is going to be the television room, by the way! 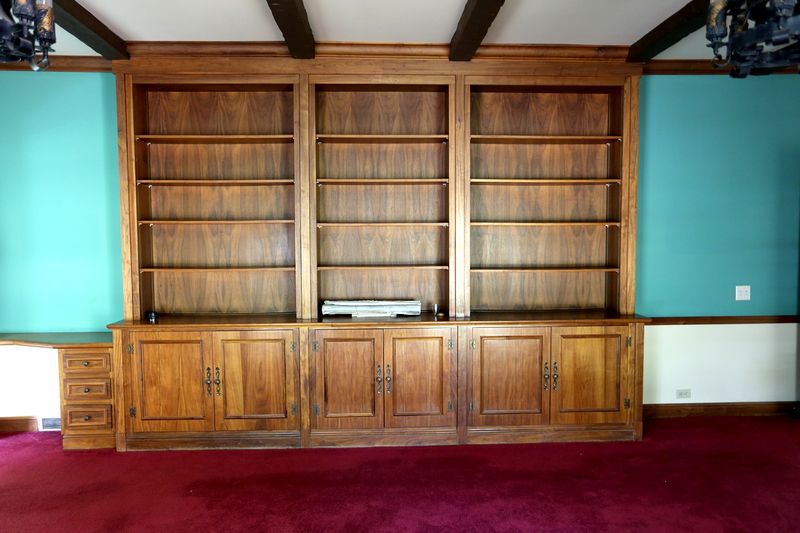 This bookshelf is actually much bigger than it looks in this photo (wide angle lens distortion). Don’t hate me for painting it white, and I won’t hate you if you say you would have kept it wood. Deal?

With the fireplace, windows and bookshelves, there really wasn’t a good place for the television. Unless we wanted to mount it to the wall opposite the fireplace (which I thought would be a bit awkward). It just didn’t seem to fit.

Our friends Ryan and Cayt had a genius television solution in their home. They have a projector screen that comes down (via remote) in front of a bookshelf. I followed “girl code” and asked permission to rip off their idea, then immediately ordered a screen online. Instead of a TV, you buy a screen, a projector and a speaker system. Then the projector can be synched with Apple TV or cable or whatever you use (I think we’re going to go with Apple TV this time). I’ll share more details about that project when it’s complete. I’m really excited to see how it turns out!

In the meantime, we’ve been watching TV on our laptops. 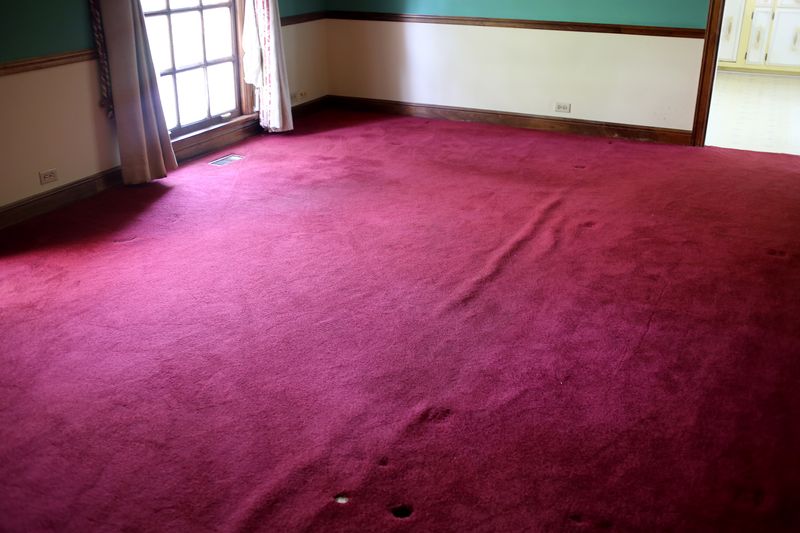 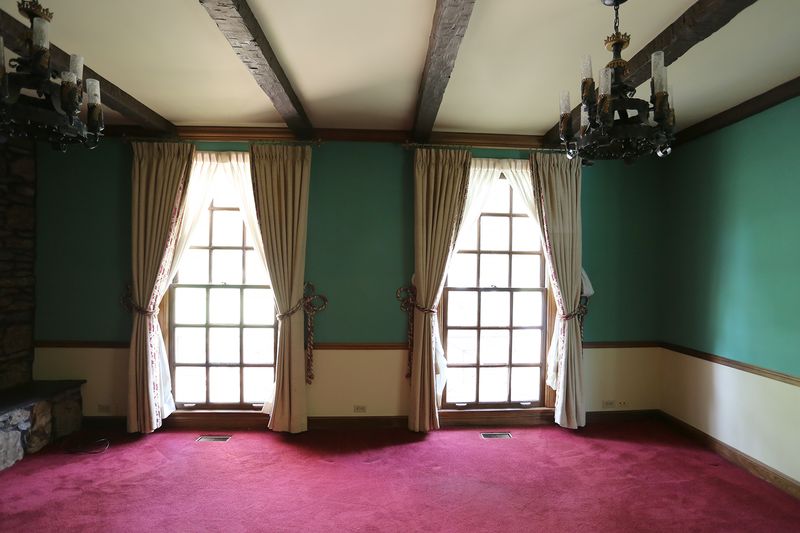 The drapes were pretty heavy and didn’t let much light in. The room doesn’t need the extra shade, so we decide to replace them with something lighter. 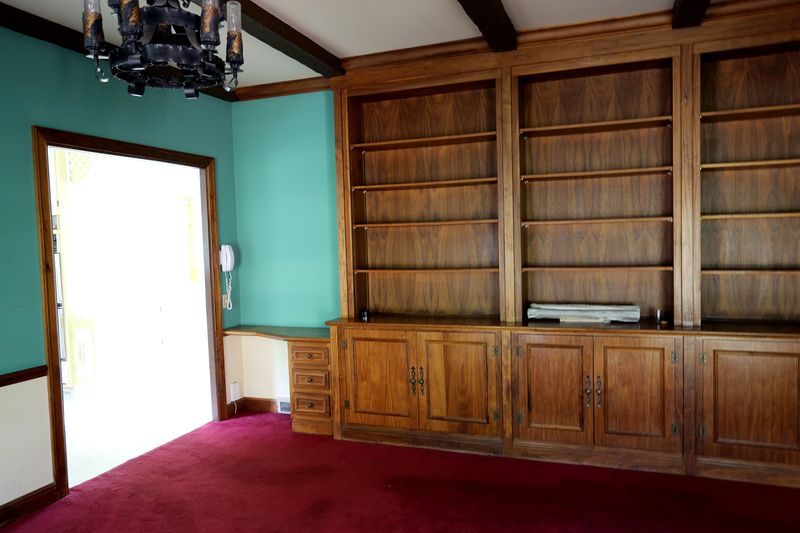 See that cute little desk in the corner? 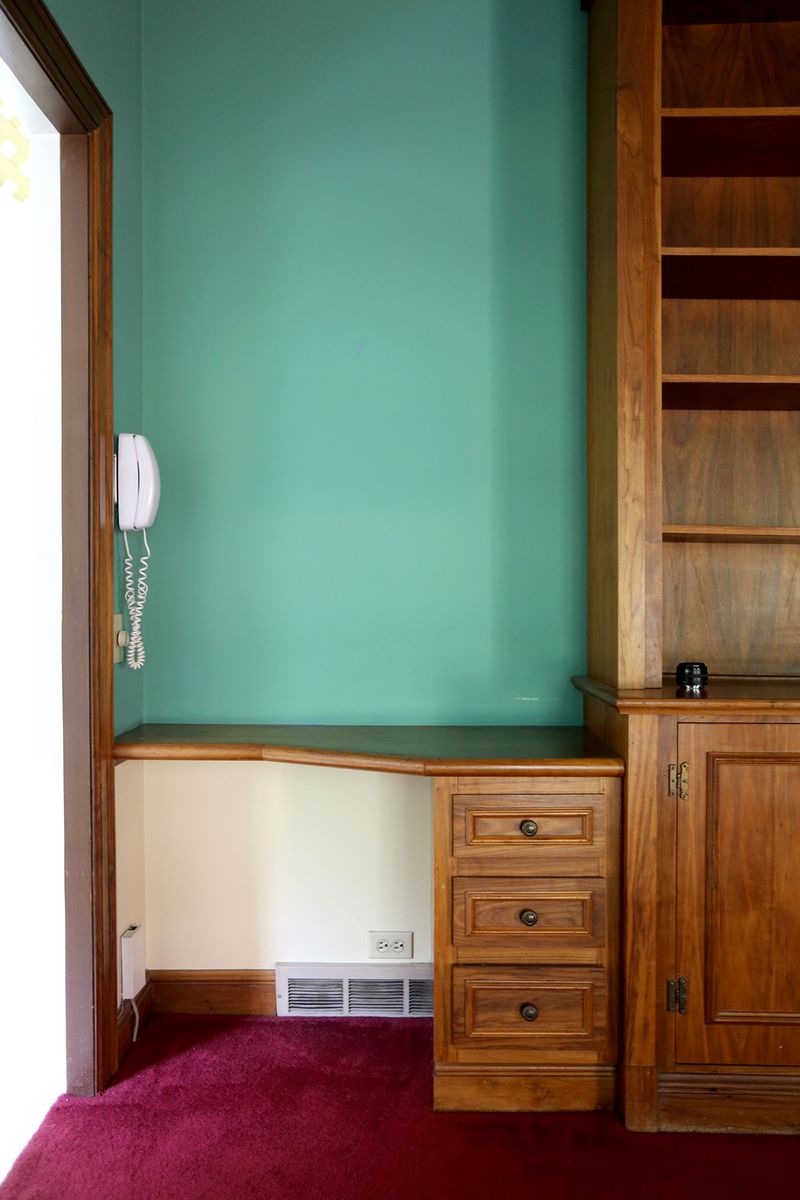 Here’s a closer look. I love this little nook and want to turn it into something really cozy. I’m thinking a pretty chair, a big painting and some pretty artwork. I think this would be the perfect spot to pay bills and write thank you cards. I REALLY want to become a good thank you card writer.

So our current plans for this space include some white shiplap, some dark charcoal gray, some brass details and a big, cozy overdyed rug. I want it to be a good spot to watch Mindy, to make s’mores and to hang out with family. I mean, I’d love it to be cool and stylish too, but cozy is my #1 priority for this space!

Thanks for following along! If you’d like to see more updates from my new house, check out my progress tag. xx- Elsie

I have serious serious house envy, it’s going to be so incredible once you’re done! My husband will never agree to buying an older home that needs updating so I shall continue to live vicariously through brave souls such as yourself.

Everyone needs a cozy little nook in their home! ♡♡

Your house is huuuuuuuge! I love it all! I would paint that bookshelf too.

This is wonderful! I can’t believe that carpet was hiding that wood floor! Looking forward to seeing what you do to that place (so I can steal some ideas for my living room!)

Oh my god, who in their right mind would cover up such pretty hard wood floors with this hideous carpet????? Like how ugly was that? But does windows are to die for! So big and gorgeous. Also the wood beams are fabulous and will probably still look great even painted. Now for the Book shelf, I love natural wood colour but I see why this wouldn’t fit with your decor so, it makes sense that you would want to paint it. Anyway, great bones, can’t wait to see what you make of it 🙂

My heart fluttered when I saw the floor under the carpet – I love wood floors. The room has character – it reminds me of the old rooms that rich old men sit in with their cigars and brandy and political views and such!

This house contains a master wood work in the interior. Wonder full sharing.

An over dyed rug DIY tutorial would be really awesome!!

Such a old house, worth for living.

I would have painted it all white too! Bookcases and fireplace. And we have that whole projector set up in our downstairs living room. It’s awesome! We don’t have a screen that pulls down though, we’ve just left one of the walls white, so when we turn on the projector it’s a HUGE screen! Like our own mini theatre. Makes movie nights just a little bit more special!

I really can’t wait to see what you’ve done with this space! I love the bookcases, but I also love white furniture, so I won’t hate you for repainting them 🙂 And those wooden floors! #swoon

This room is going to be amazing when it’s done! It has great bones!

Can’t wait to see the fireplace. Earlier this summer we moved into a 70’s funk palace and have this same room complete with the red carpet, except in a basement with dark paneling. OMG. We’ve completely transformed it, except for the fireplace eyesore. I don’t know what to do, other than reframe it. Maybe you’ll have a solution.

I swear to God, this room is the size of my entire London flat haha!

The house was built in the 70s…it’s not like the bookcase was an antique! I’m excited to see it painted. 🙂 We live in a 100+ year old house in Denver with a lot of beautiful woodwork…and in that case, you just have to go with the vintage feel! I can’t wait to see what you do with this room!

So excited to see what you do with this space! And I LOVE the bookshelves – I dream of having a whole wall of bookshelves one day (and yes, I’d paint them white too!)

For your TV, I suggest looking into a Kodi box over the Apple TV 😉

Love your idea for the desk nook… I would have just ripped it out first sight.

I love how much you love Mindy! #WWMD