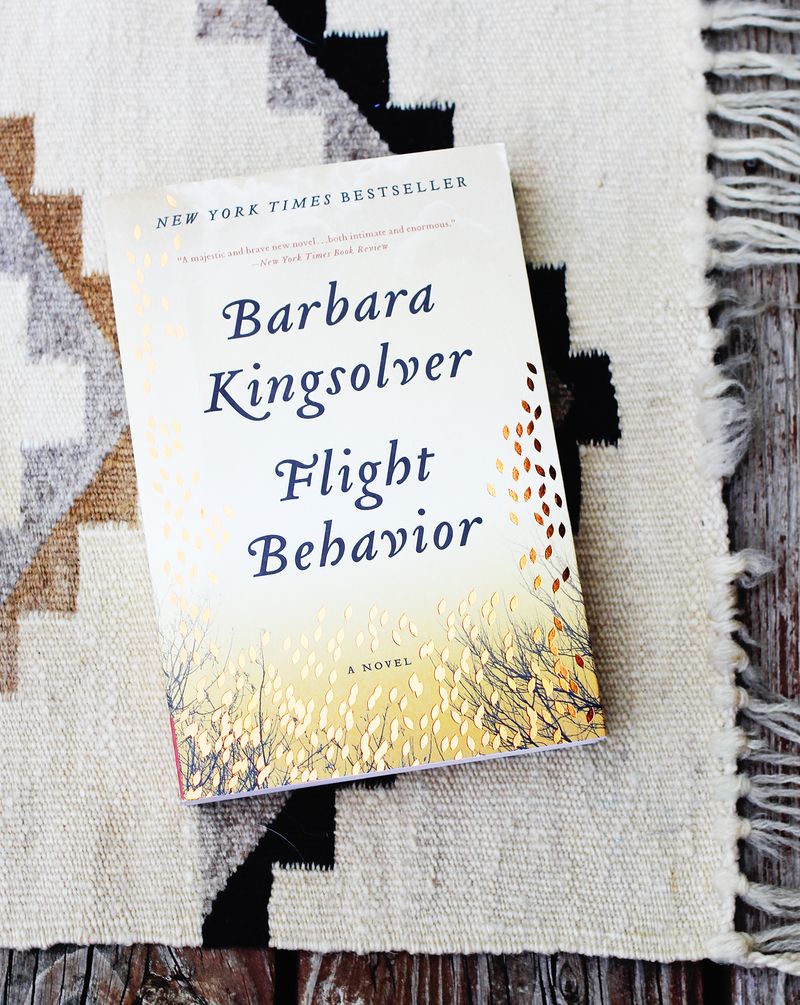 Did you all read Flight Behavior this month? If not, you missed out! I chose this month's ABM book club selection because I adore Barbara Kingsolver, and I realized she had a new-ish novel out that I hadn't read yet.

Quick back story about Barbara Kingsolver: I love many of her books, but one of my very favorites is Animal, Vegetable, Miracle: A Year of Food Life. In the book, Kingsolver chronicles a year of her and her family's life eating only local food (that they produced or from neighbors). That book inspired me to start a local eating project years ago, which is what I based my very first blog on. So, really, I have to credit Barbara Kingsolver as the person who got me into blogging, which is a big part of what I do for a living today. I realize this is a super random story, but I really think it speaks to the power of good books and reading. It can be life changing. I'm a living example of it.

Before we begin the discussion, here's a friendly remind that there likely will be SPOILERS! Also, feel free to use one of the following discussion points as a jumping-off point, or bring up your own thoughts.

1. An obvious easy place to start: the title. What the heck is flight behavior?

Of course flight behavior has a great deal to do with the butterflies and their strange new migration pattern, leading them into the lives of our protagonists. But the other meaning (or maybe there's more?) has to do with Dellarobia. We meet her at the beginning of the book as she is climbing up to a small cabin on their property to commit adultery. And at the end of the novel, the happy ending that we are given is that Dellarobia is leaving her dysfunctional marriage to move into an apartment with her high school pal Dovey and begin her college career. So she, too, changes her regular pattern of life for a different course, like the butterflies. What do they have in common? How do they differ?

We met so many super interesting characters throughout the story: Dellarobia, Cub, Bear, Hester, Ovid, Bobby, and so on. One thing I love about this book is how your perception of a character can change over the course of the story as you learn more about his or her life and the challenges he or she faces.

For example, Hester is a rather unlikable character at first. She seems to be a grumpy mother-in-law and somewhat uncaring grandmother. Although she, in many ways, acts as the matriarch of the family, she doesn't seem to rule with a lot of grace or mercy. For me, Hester seems so opposite of my own mother, so it was hard for me to like her or understand where she was coming from on decisions. But then, toward the very end of the book she reveals that she had to give up a child when she was very young, and that child is now the pastor of her church, and she can't talk about it or tell anyone, as her husband told her long ago he would still marry even though she had a child with another man, as long as they never spoke of it. She likely feels just as trapped and regretful as Dellarobia does in her own marriage. And even if you don't agree with all the decisions she's made through the book or her life, you can't help but realize that her life is SO much more complicated, and painful, than you may have realized.

I also have to say that I just love Ovid Byron. He's so smart, kind-hearted, and passionate. His single-minded passion to the study of monarch butterflies is truly inspiring. I hope I can live as passionate a life as he does. It's inspiring, don't you think?

3. I would do this book an injustice if we didn't discuss its environmental themes.

What did you think of how Ovid's world (science, upper or middle class, educated) and the world surrounding Dellarobia (religious, poverty, undereducated due to less opportunity) view the events that surround the butterflies? Dellarobia's town views their appearance as sort of a miracle, possibly sent from God, while Ovid views their fluctuating migratory patterns as a sign of the overall environmental crisis that our world is facing. Many of Dellarobia's family and community members view global warming as a myth, while Ovid is alarmed that anyone would ignore all the evidence to the contrary. Do you think this is fair? Have you seen this kind of issue come up in your community?

I also LOVED the scene when Ovid is interviewed for the news. I think it's meant to be a somewhat funny moment in the book, but do you also think it sheds light on something a little broken in news media (focusing on the wrong issues or emphasizing sensationalism over facts)?

This isn't a discussion point, per say, but I now REALLY want to see a monarch nesting ground someday. It sounds just amazing!

Let us know your thoughts on the book in the comments below. And don't forget to pick up your copy of Middlesex, as we'll be discussing this book with Danielle in September. xo. Emma