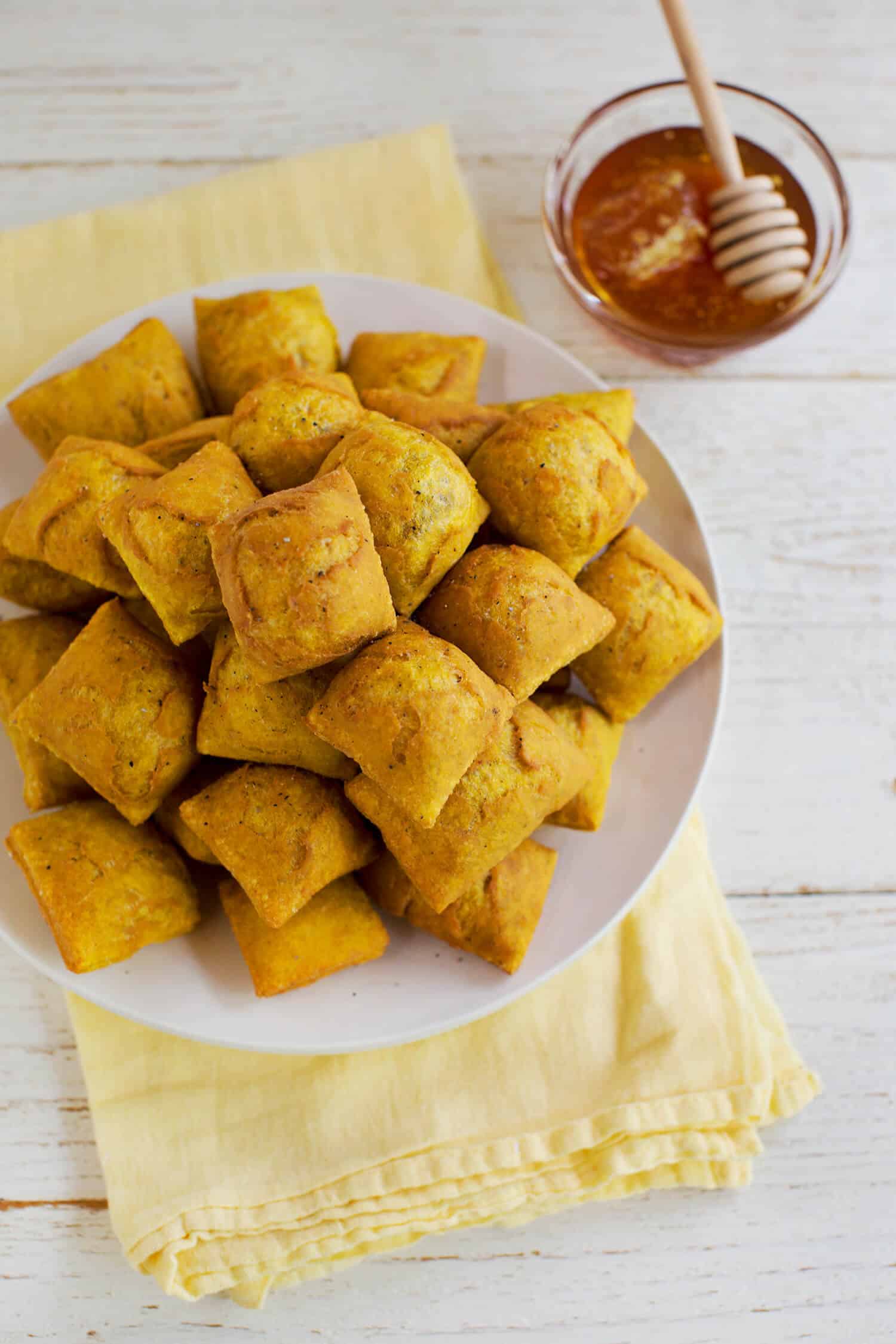 I don’t deep fry often, but when I do, I rarely regret it. 🙂 It has been a while since I filled my kitchen with the thick smell of yeasted, fried things. I say “things” because it seems possible that at least some of you are probably wondering what a Sopapilla is. The short answer: a type of fried bread. (Yum!!!!!!)

A slightly longer answer: for me, Sopapillas conjure up a very happy childhood memory. My great grandmother, Lula, lived in Oklahoma up until she passed some years ago. As a kid, my family made the trek from our home in Missouri down to Oklahoma to visit her many, many summers. (Every summer? I guess I don’t totally remember? Mom, are you reading this? Was it every summer?) Anyway, on the drive home, we’d often stop at Casa Bonita to eat. I don’t think that location is around anymore, but the chain still exists, or so the Internet tells me. But if you’ve never been to one, it’s a Mexican style restaurant that has extravagant decor like waterfalls or caves inside. As a kid, I LOVED it there, but by far my favorite thing was the Sopapillas. I can’t really speak to how authentic they were, but the simple, cinnamon sugar, puffy-square versions they served will always be the standard for me since it’s a childhood thing. But, to be honest, I don’t think I’ve ever really met a donut I didn’t love. 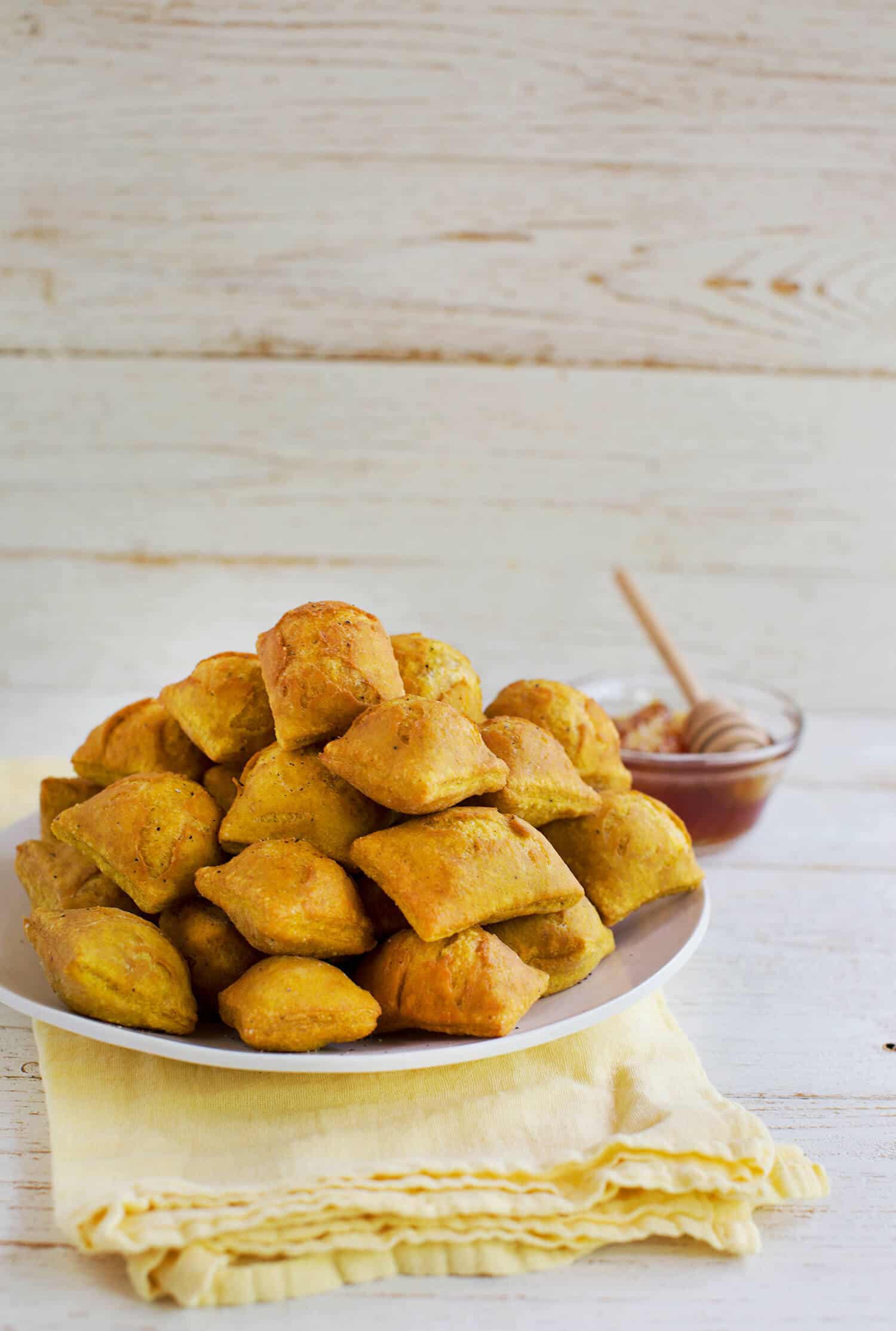 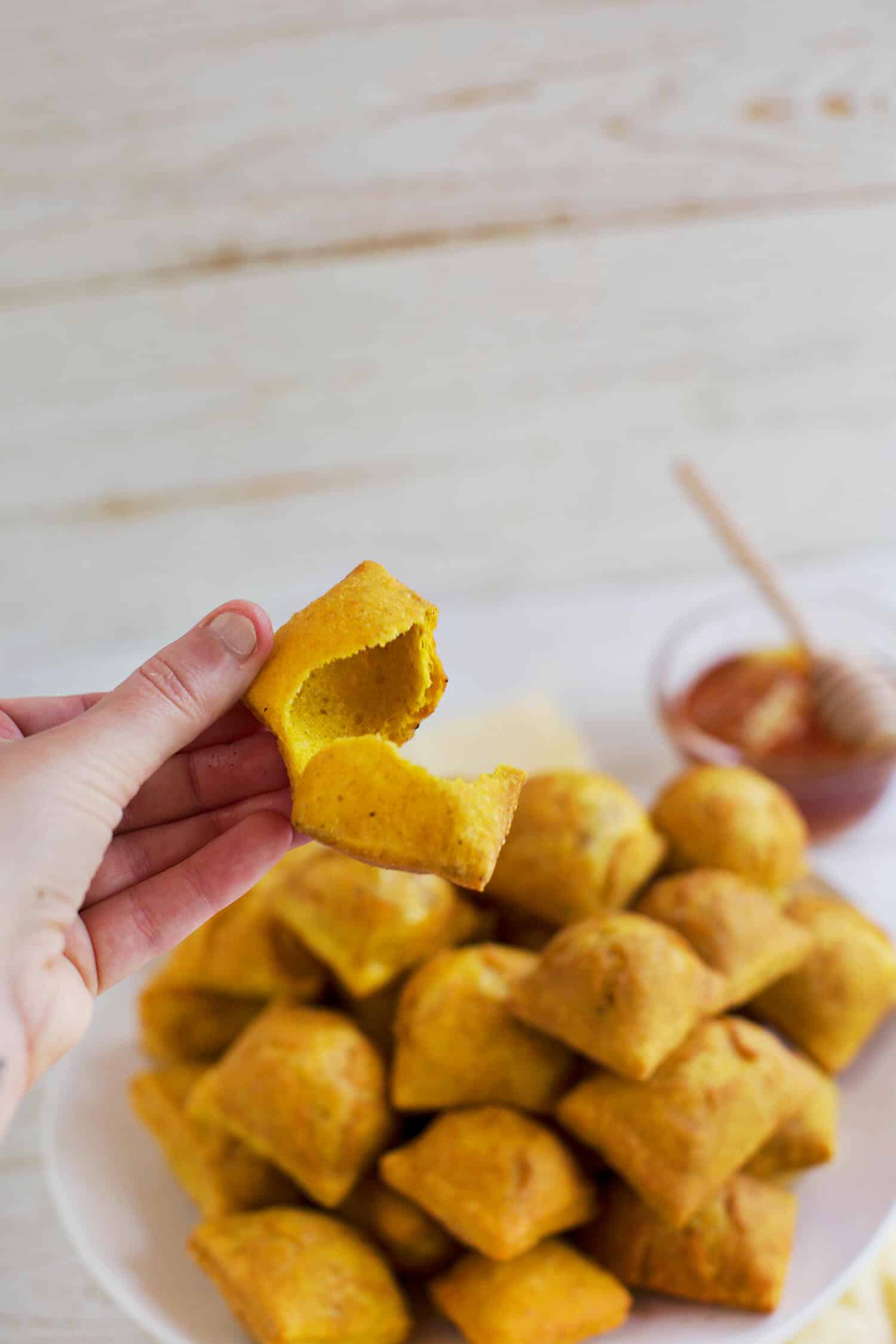 These are just a simple variation on this Sopapilla recipe I shared some time ago. The dough gets spiced with more cinnamon, ginger, turmeric, and a little black pepper. The final Sopapillas taste mildly spiced (it’s not overpowering but it’s THERE for sure), and I love how these flavors pair with honey. I like to serve these plain so that you can tear them open and pour honey inside just before eating. But if you want to turn them into more of a donut or beignet, then you could dust them with powdered sugar or even add a glaze before serving. But to me, that just isn’t how you do Sopapillas. 🙂

Not to get all bossy on you or anything.

Oh, and the addition of the turmeric gives them a beautiful golden color. Fun, right? 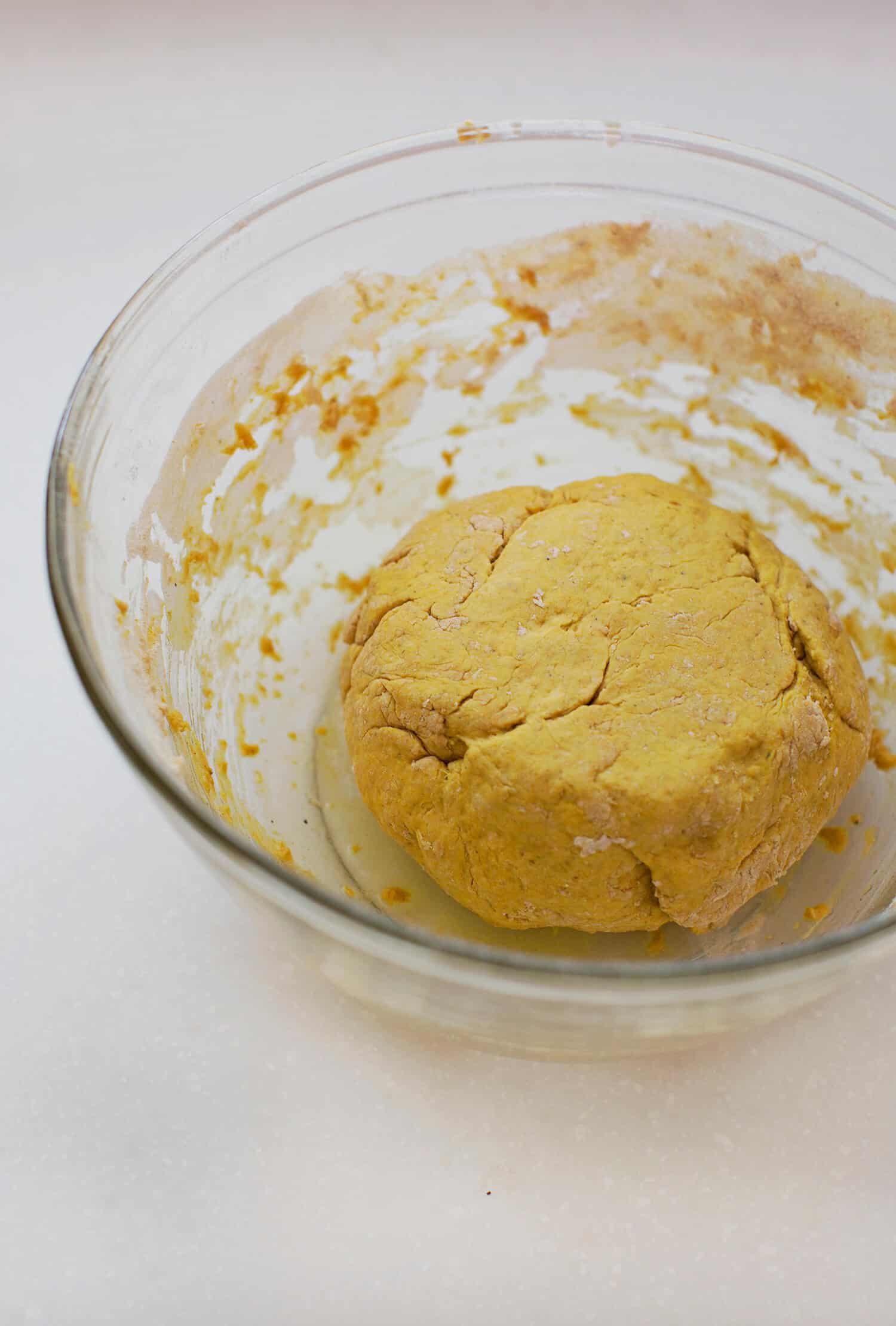 In a small bowl stir together the warm water and sugar until the sugar dissolves. Pour the yeast over the top of the water and allow to sit for 6-8 minutes (it should activate and will look foamy). 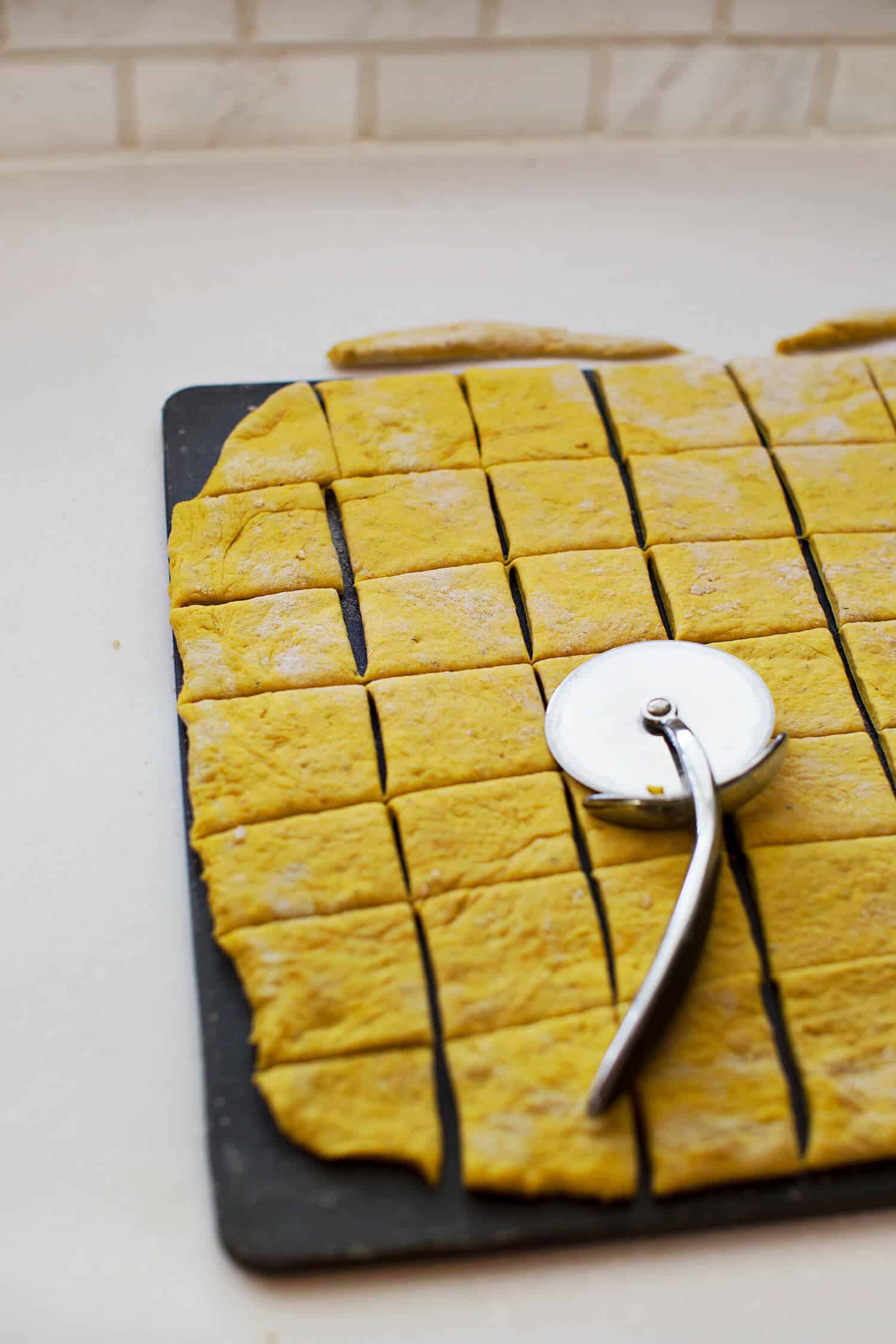 In a large bowl stir together the flour, salt, turmeric, cinnamon, ginger, and pepper. Stir in the yeast mixture until a loose dough ball forms. Turn out onto a lightly floured counter and knead for 4-6 minutes, until the dough begins to become elastic. Place in a lightly oiled bowl, cover and allow to rise in a warm spot for an hour or until doubled in size.

Punch down and roll out on a lightly floured surface so that it’s about 1/4 inch thick. Cut into squares (or other fun shapes). 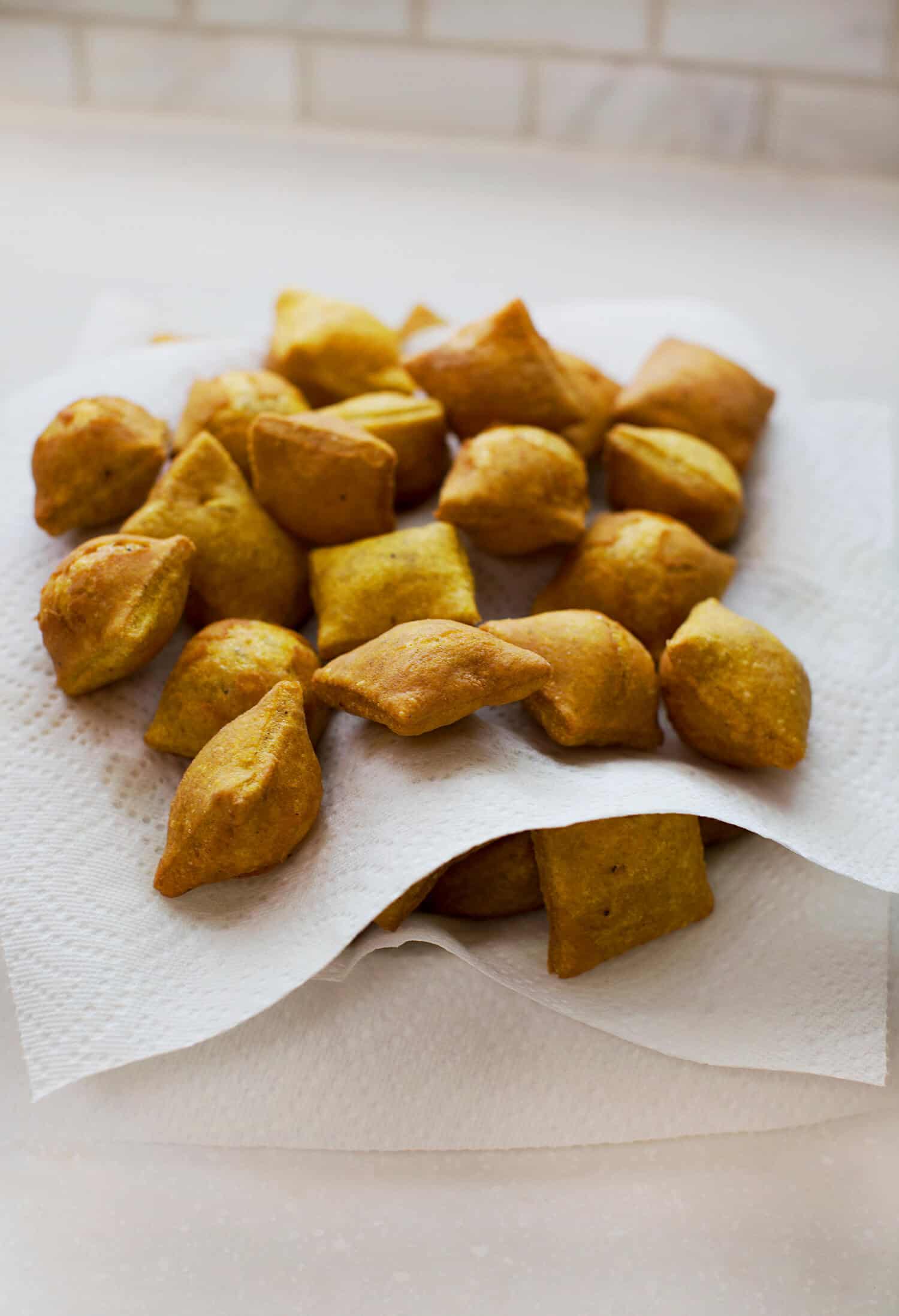 In a large, heavy pot heat enough oil, so the Sopapillas can float, to around 350°F. Fry the Sopapillas until browned, about 1 minute on each side. They will really puff up, so I find it’s easiest to flip and move them from the pot with metal tongs. Once cooked through, remove to a plate lined with paper towels to remove excess oil.

It’s great to cook one as a test and just make sure that it cooks through with your cook time before you begin adding multiples to the pot. And even when you do, don’t crowd the pot with so many that it’s hard to flip them, as this can also cause your oil temperature to go down quicker than you’d probably like. These fry fast, so you probably don’t need to cook more than 3-5 at a time depending on your size pot. 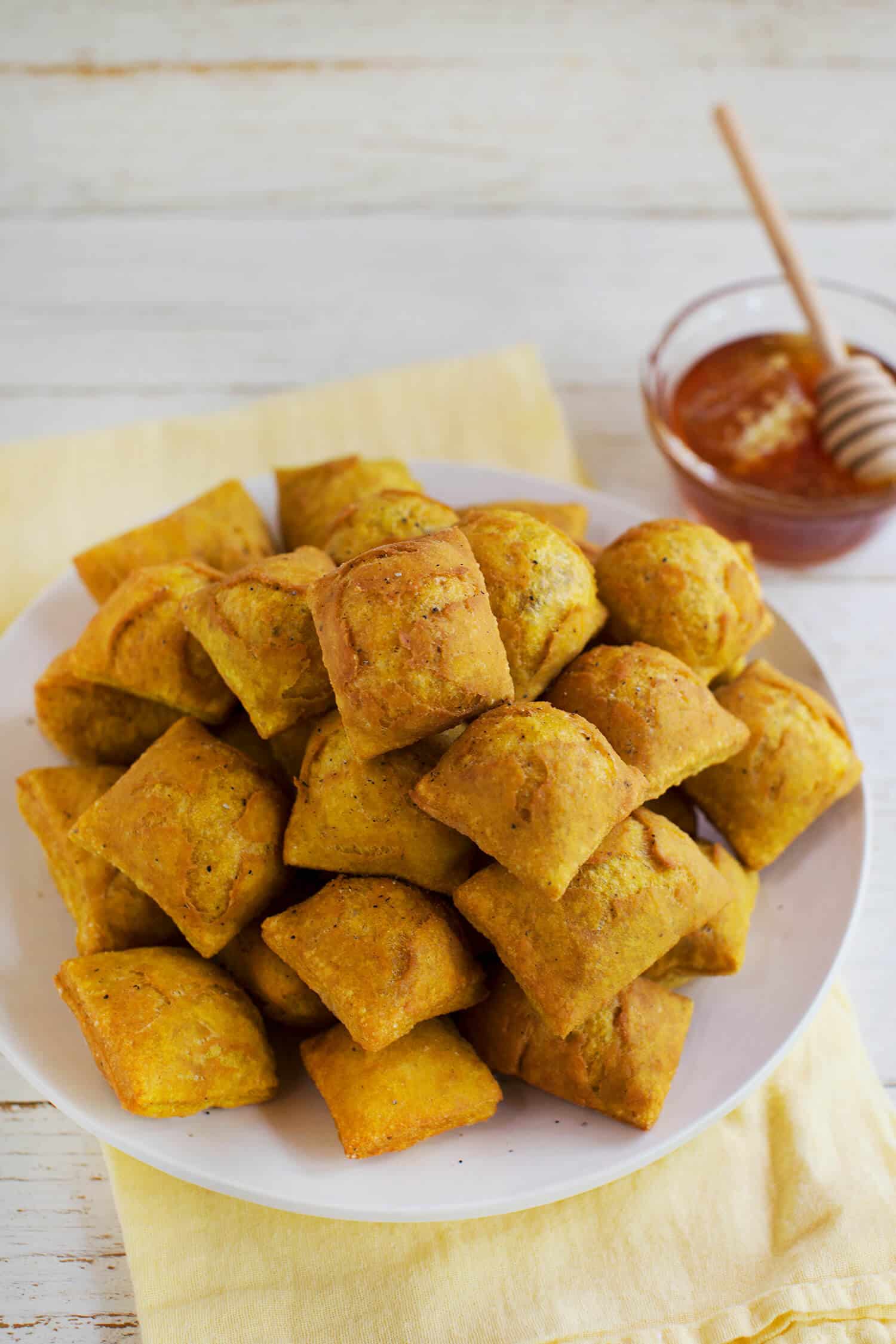 Serve warm with honey along side. Just two notes on this one:

-If you decide to cut these in different shapes or make your squares much bigger than mine (pictured above), you may make more or less Sopapillas than indicated above and you may need to adjust your fry time slightly. But give one a test and see before you go nuts. 🙂

These are about the easiest “donuts” to make and SO delicious. Make some fried bread and celebrate something—you’ll be glad you did! xo. Emma