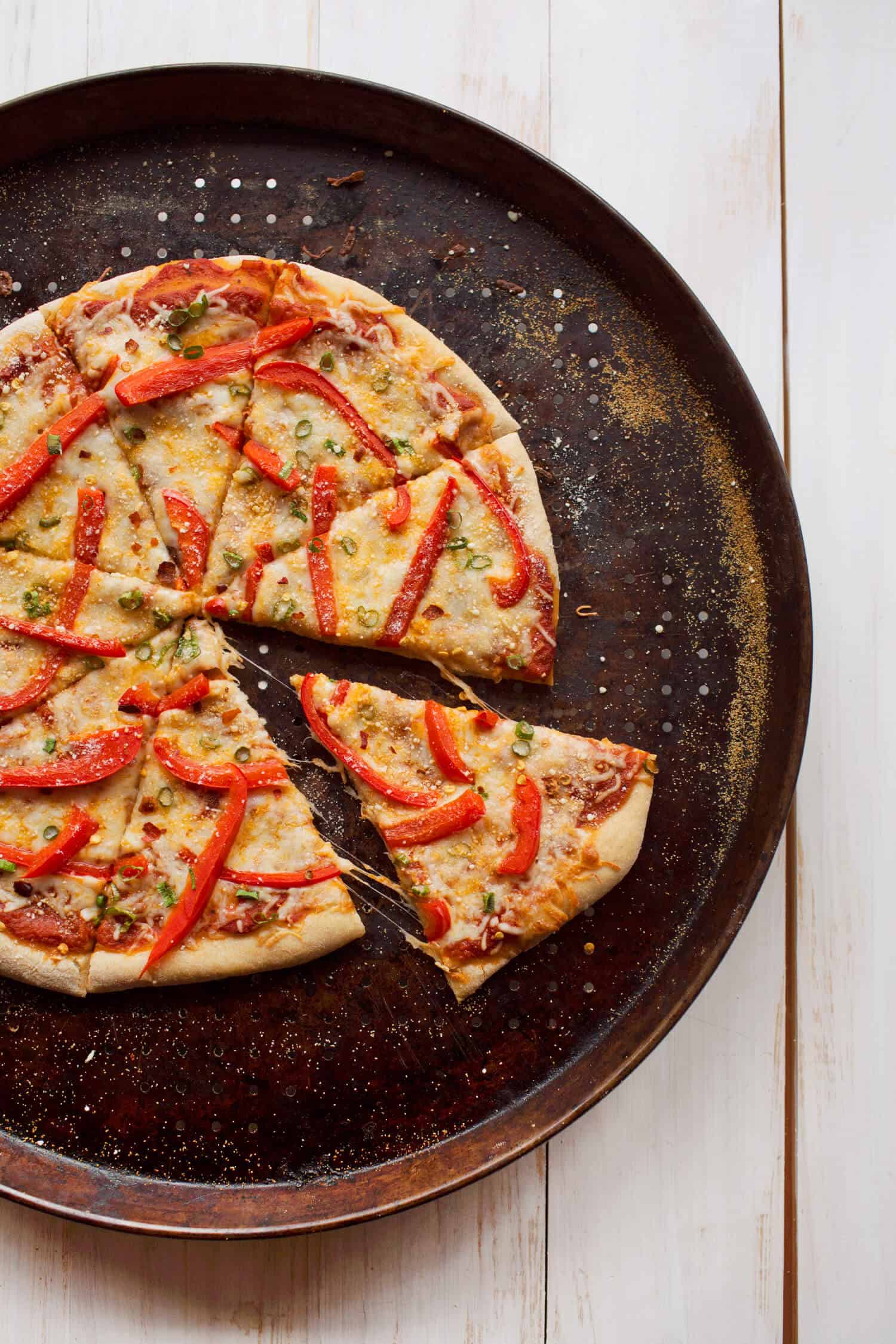 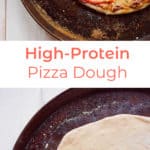 I use pizza night as an excuse to use up whatever leftover bits of vegetables I may have in my refrigerator. Of course, I don’t really need an excuse to make pizza because obviously it’s the best food on the planet (!!!!!!).

Not only is it delicious, it’s easy to throw together, inexpensive, and like I said, a great way to use up leftover vegetables.

As many of you know, I like to eat mostly plant-based with a little meat (mostly fish) thrown in here and there. So one thing I am always thinking on is how to get a little more protein into my diet, even if I’m making a veggie pizza. 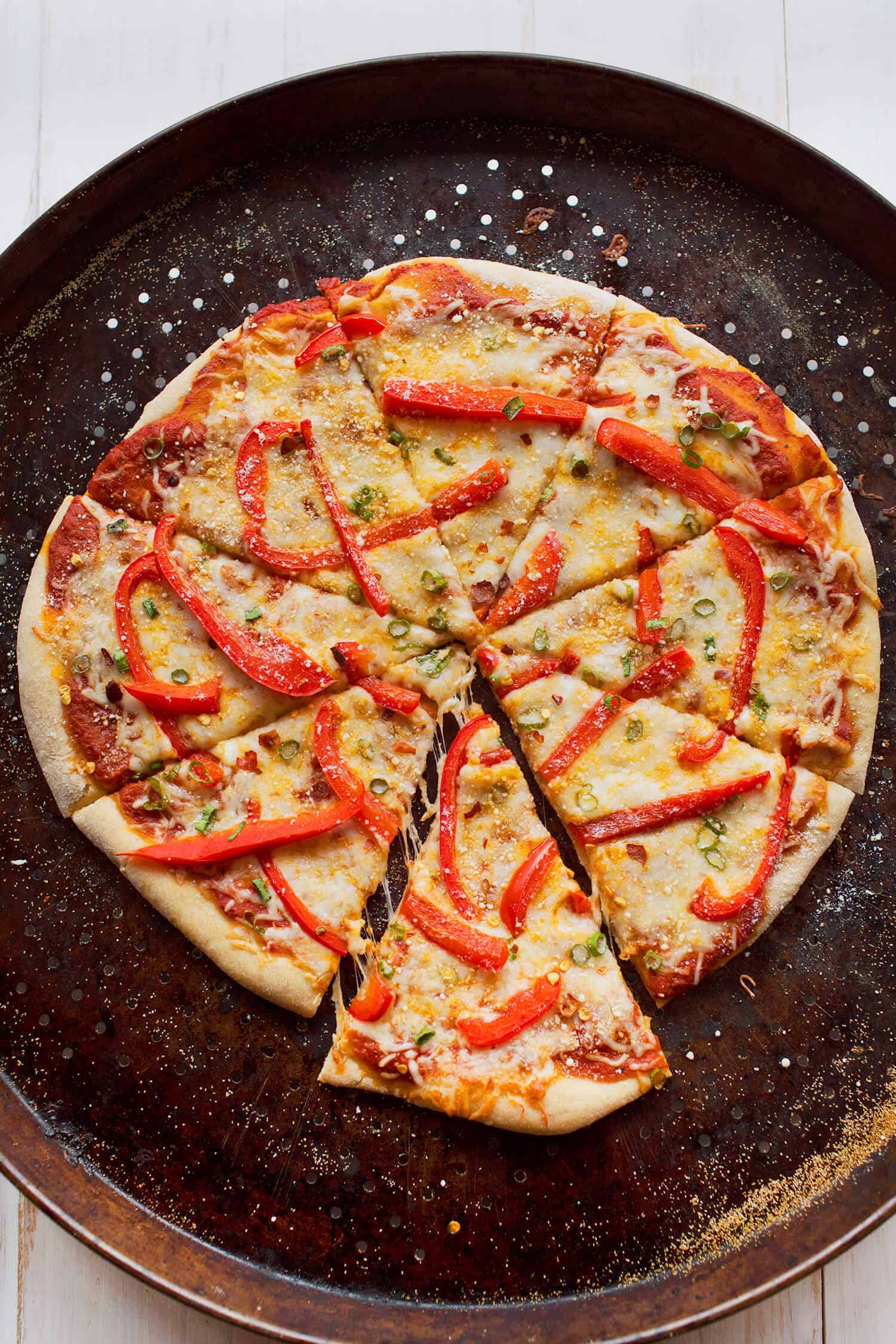 That was the motivating factor behind why I started playing around with creating a higher protein pizza dough recipe. So for anyone who usually coats a piece of beef jerky with sauce and cheese and calls that pizza, this may not be enough protein for you.

But as I’m guessing that’s a really small group of people (right? I mean, I feel like I made that up) then we’re probably good here.

My goal was to create a soft and chewy pizza dough that didn’t taste totally different from “regular” pizza dough. You know, like you could totally trick your kids with this healthier version. Ha! It took some tweaking because a few test versions turned out too dry or too grainy.

This is also a yeasted dough so you still want it to rise (happy home for yeast to do their work) so you get that fluffy bread texture.

The following recipe totally fits the bill and with right around 41 grams of protein, making each serving (there are 4) a little over 10 grams of protein each. And that’s just the crust! You can get a little more protein from mozzarella cheese or go dairy free and use vegan Parm made with nutritional yeast which packs a pretty great protein count too.

The toppings are up to you, but even if you’re like me and just using up leftover veggies at least you’re gonna get a little more protein in than usual. 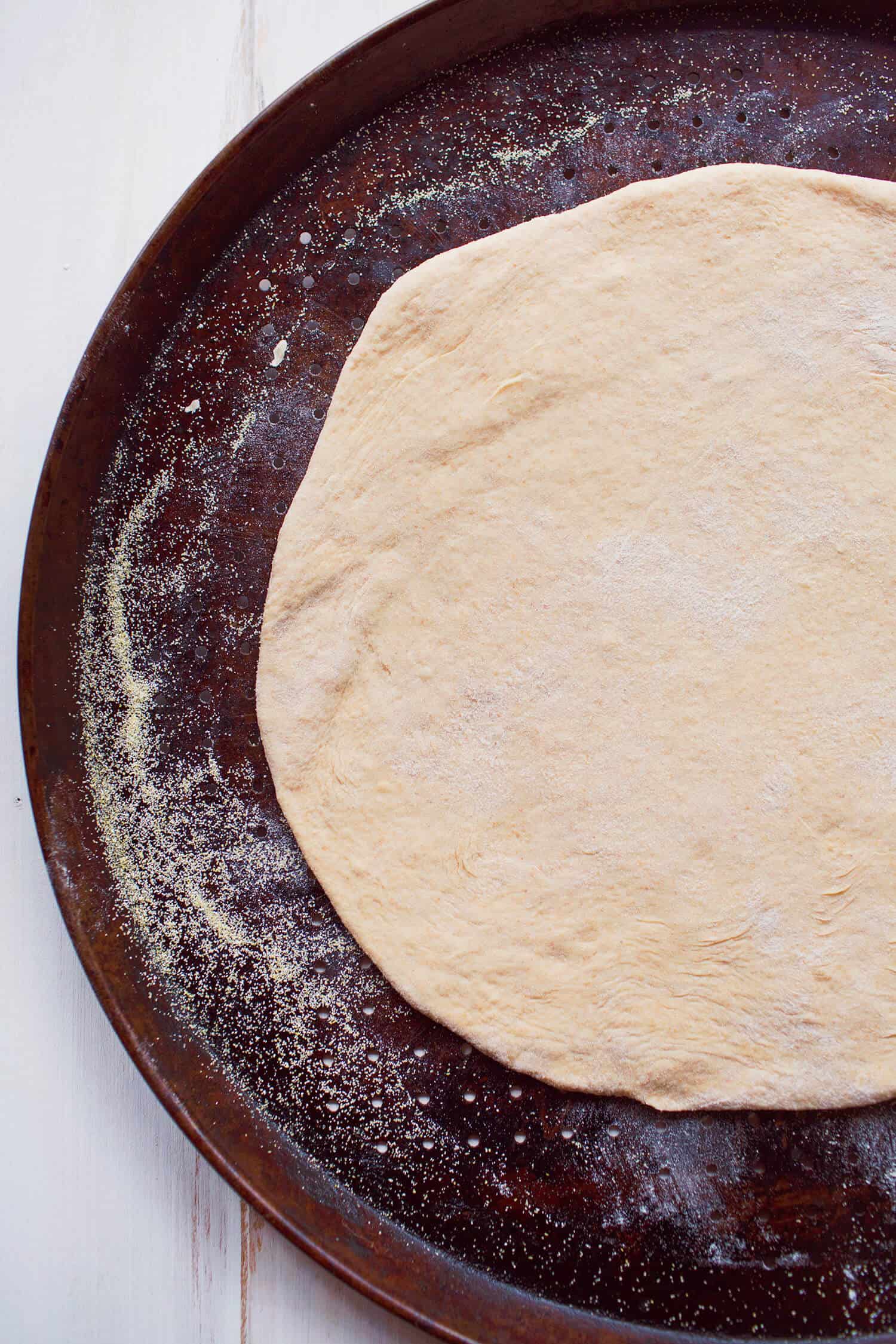 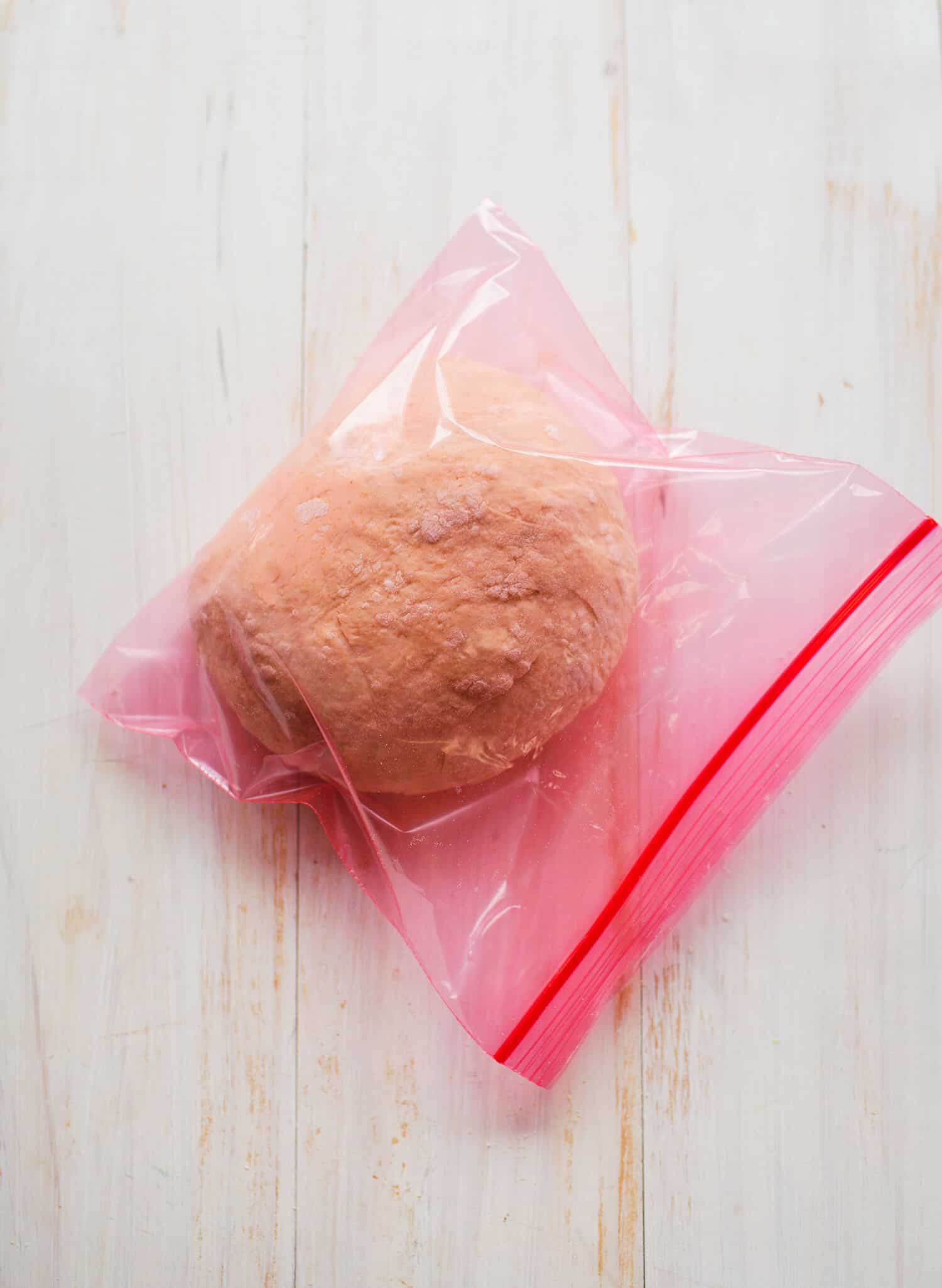 You can use this dough recipe to make one large pizza (that could easily feed 4 adults) or you can divide the dough in half after it has risen and freeze the second half to use later.

The pizza you see pictured here is meant for 2 adults, being only half the dough (above you can see how I froze the second half). 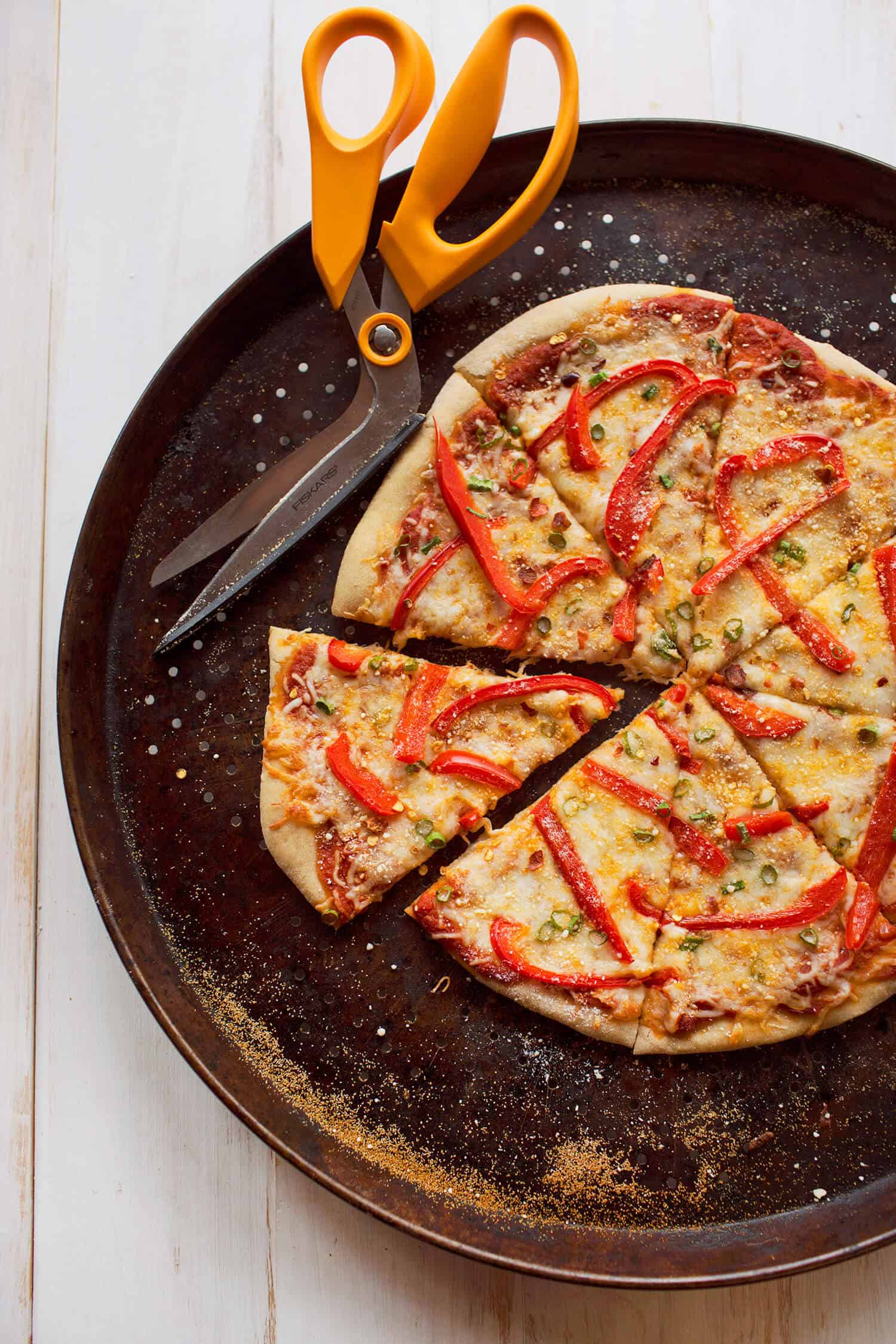 Other than the protein from the flour (I love a mix of all-purpose and whole wheat here) most of the protein comes from pea protein, which is an ingredient I’ve gotten into lately so you’re likely to see a few more recipes with it on the blog soon.

You could probably use other protein powders, although I haven’t tried that. I am sort of into just plain pea protein for cooking / baking recipes though (as opposed to smoothie making which is what we use protein powder for most often at our house) because it’s just one ingredient and has a very ‘plain’ flavor. Happy pizza making! xo. Emma

P.S. For my fellow pizza lover’s out there-do you use pizza scissors? I got some recently and I am OBSESSED. 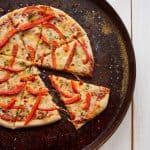 You can substitute a little more of the all-purpose flour with whole wheat, making the rations 3/4 cup to 1/2 cup with similar results if you want more whole grains.