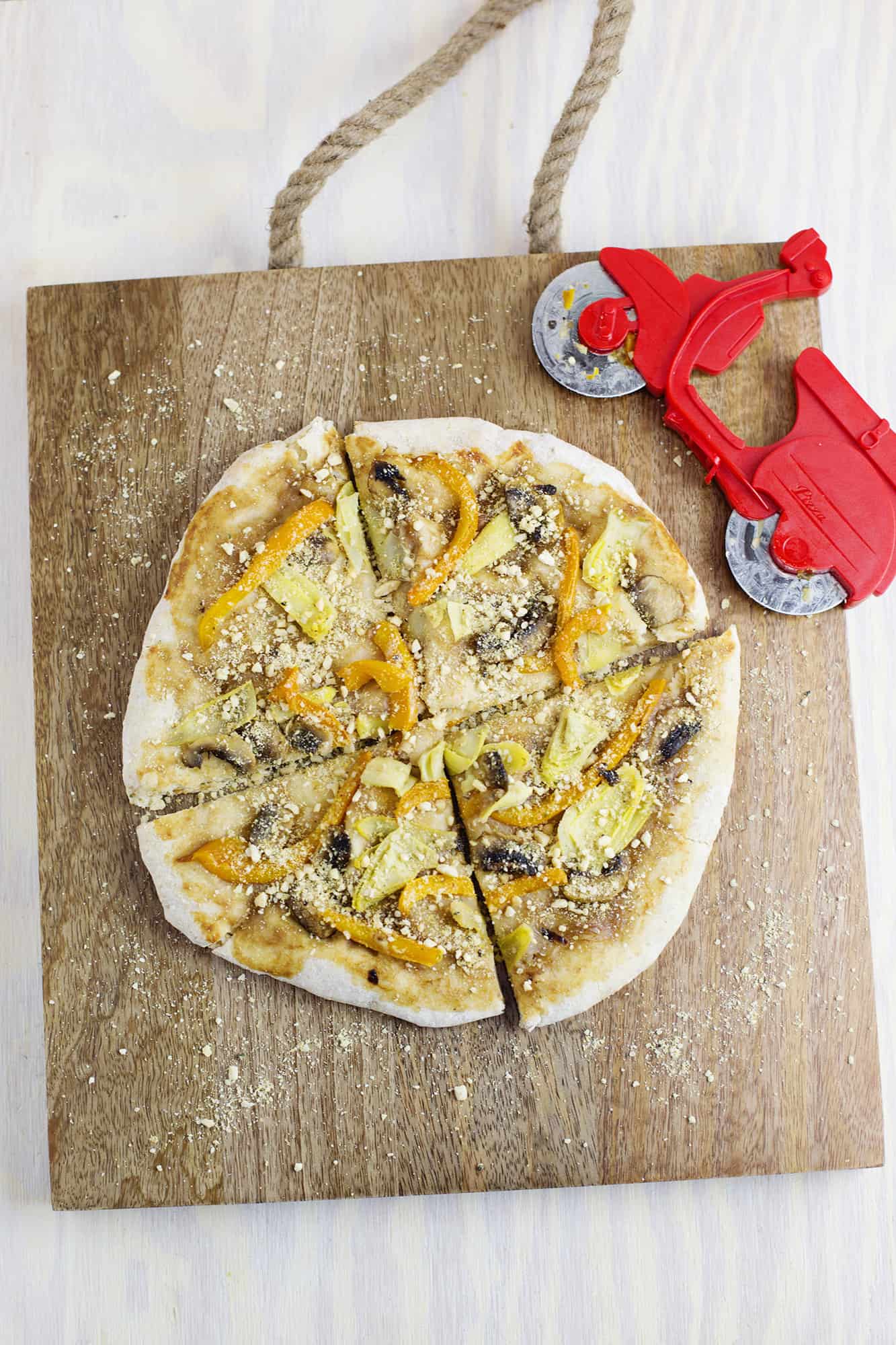 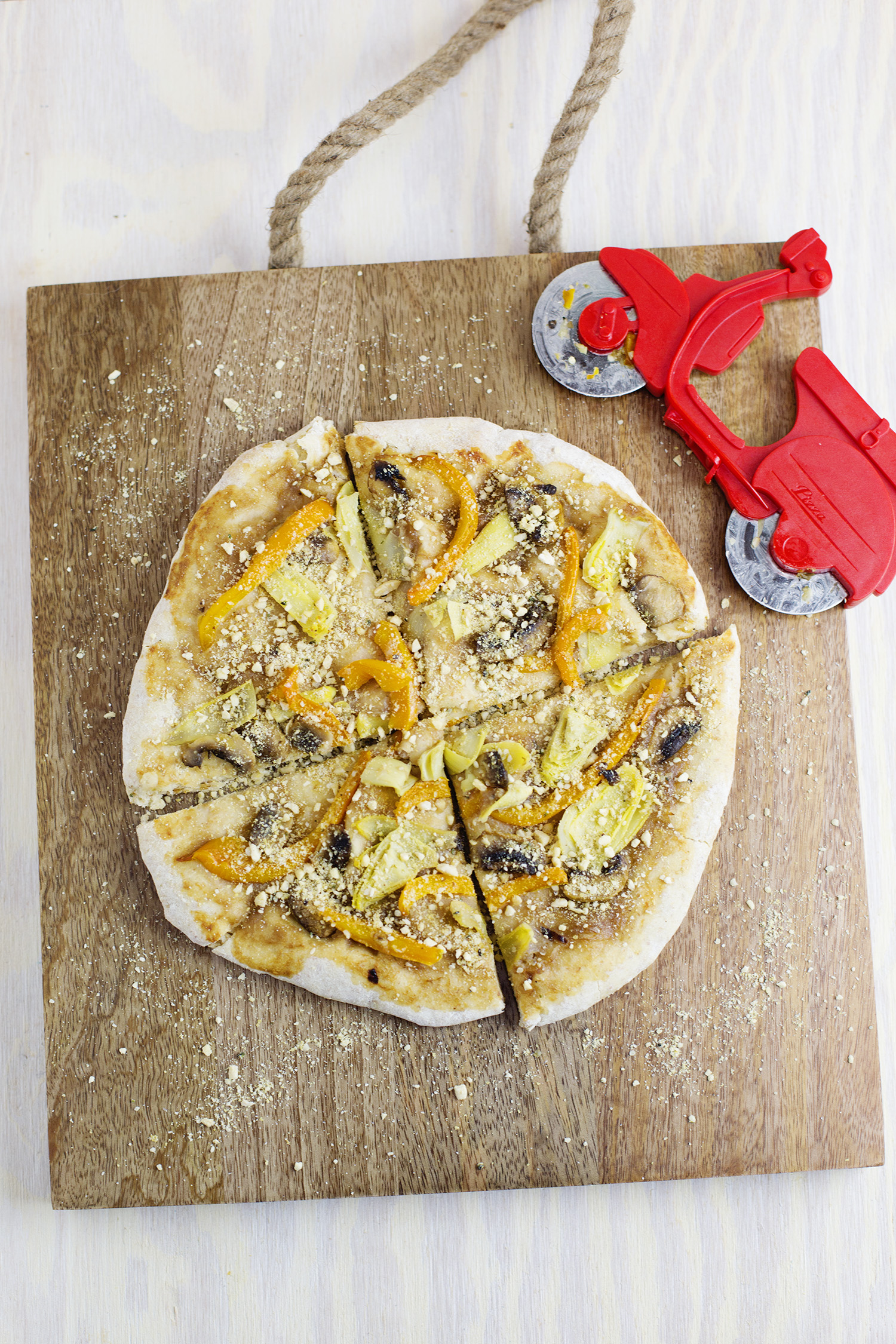 Confession: One of my very favorite too-lazy-to-cook dinners is Amy’s Roasted Vegetable Pizza. It’s my favorite frozen pizza. I think in part because it doesn’t have cheese. Now, I love cheesy pizza, don’t get me wrong. But sometimes I just feel like cheese doesn’t freeze well, or that frozen pizzas with lots of cheese can turn out a bit too soggy. So although I am not vegan by any stretch of the imagination, I honestly prefer this non-dairy pizza when I’m in the mood for frozen pizza.

My favorite part of this pizza is this kind of sweet onion type spread that replaces the usual tomato sauce. I don’t know Amy’s exact recipe, but I’ve been experimenting with recreating this onion spread at home. 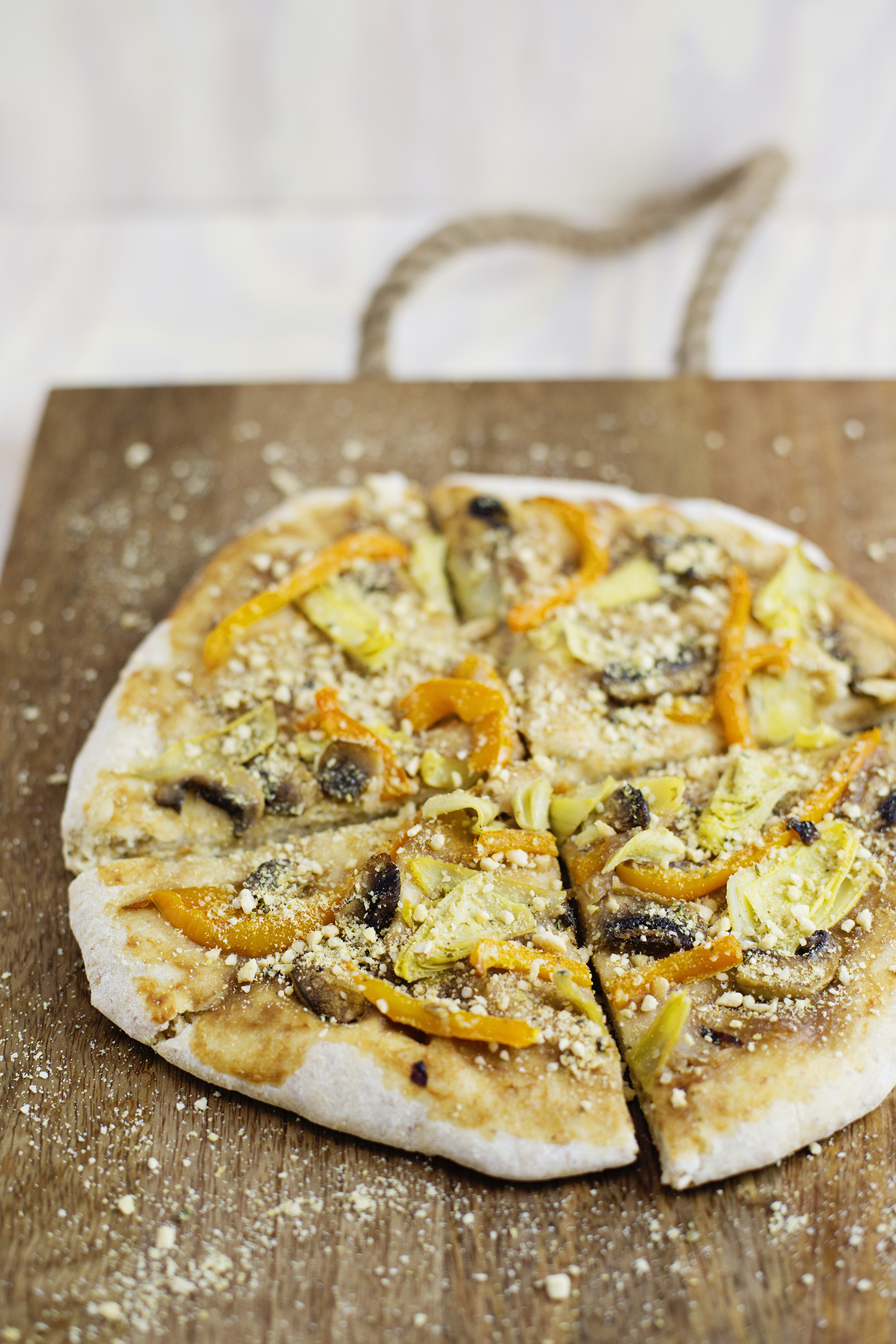 I’ve tried a few versions, and I’m finally happy enough with it that I’m ready to share it with you all. And you’re in luck because this version is no where near as overpowering in the smell department as a few of my first attempts. Ha! When experimenting with recipes heavy in the onion and garlic department, my kitchen can get pretty smelly fast — occupational hazard I suppose.

This recipe creates 4 small pizzas that you can freeze and eat later. Again, I was looking to create a homemade version of a store-bought favorite with this. If frozen pizza isn’t your thing, I still recommend trying the onion spread as a sauce alternative on a pizza someday. It’s just so tasty. But otherwise feel free to change it up however you like. Maybe you already have a favorite dough recipe or you prefer different vegetables for the topping? This is very customizable, so you do you. 🙂 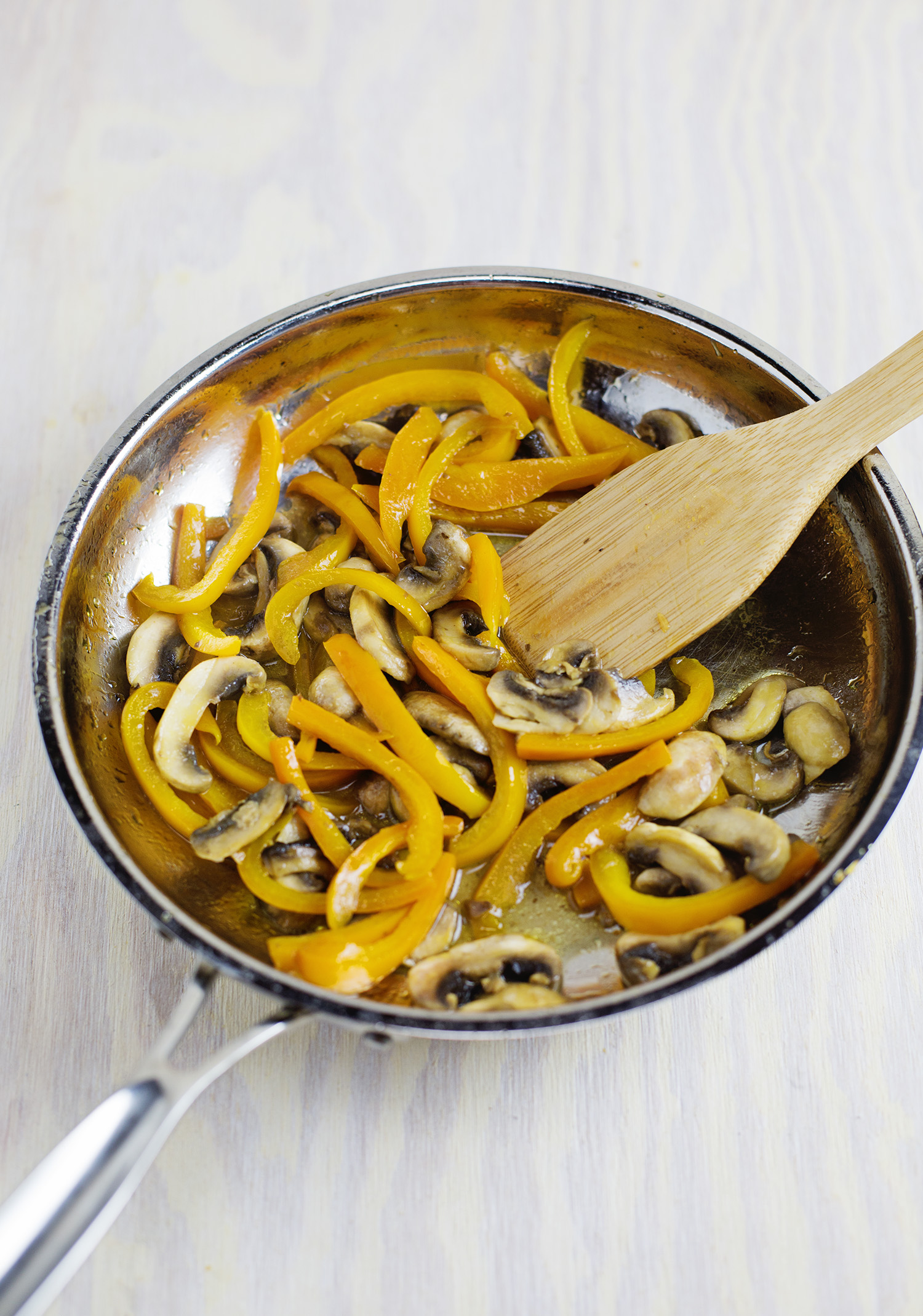 Homemade Veggie Frozen Pizza, makes 4 pizzas (that could each feed 2).

First make the dough. Combine the water and sugar. Sprinkle the yeast over the water and allow to sit for 5 minutes. Meanwhile in a large mixing bowl, combine the flours and salt. Pour the yeast water and olive oil in with the flour and stir until a dough ball begins to form. Knead for 3-4 minutes. Then place back in the lightly oiled bowl, cover, and allow to rise for one hour.

Punch the dough down and divide into four. Knead each into a dough ball. Cover and allow to rest for 10 to 15 minutes. Roll out each dough ball and bake at 375°F for 5 to 6 minutes. The dough will not be fully cooked but will hold its shape. You don’t want to fully bake the dough yet as that will come later after freezing. 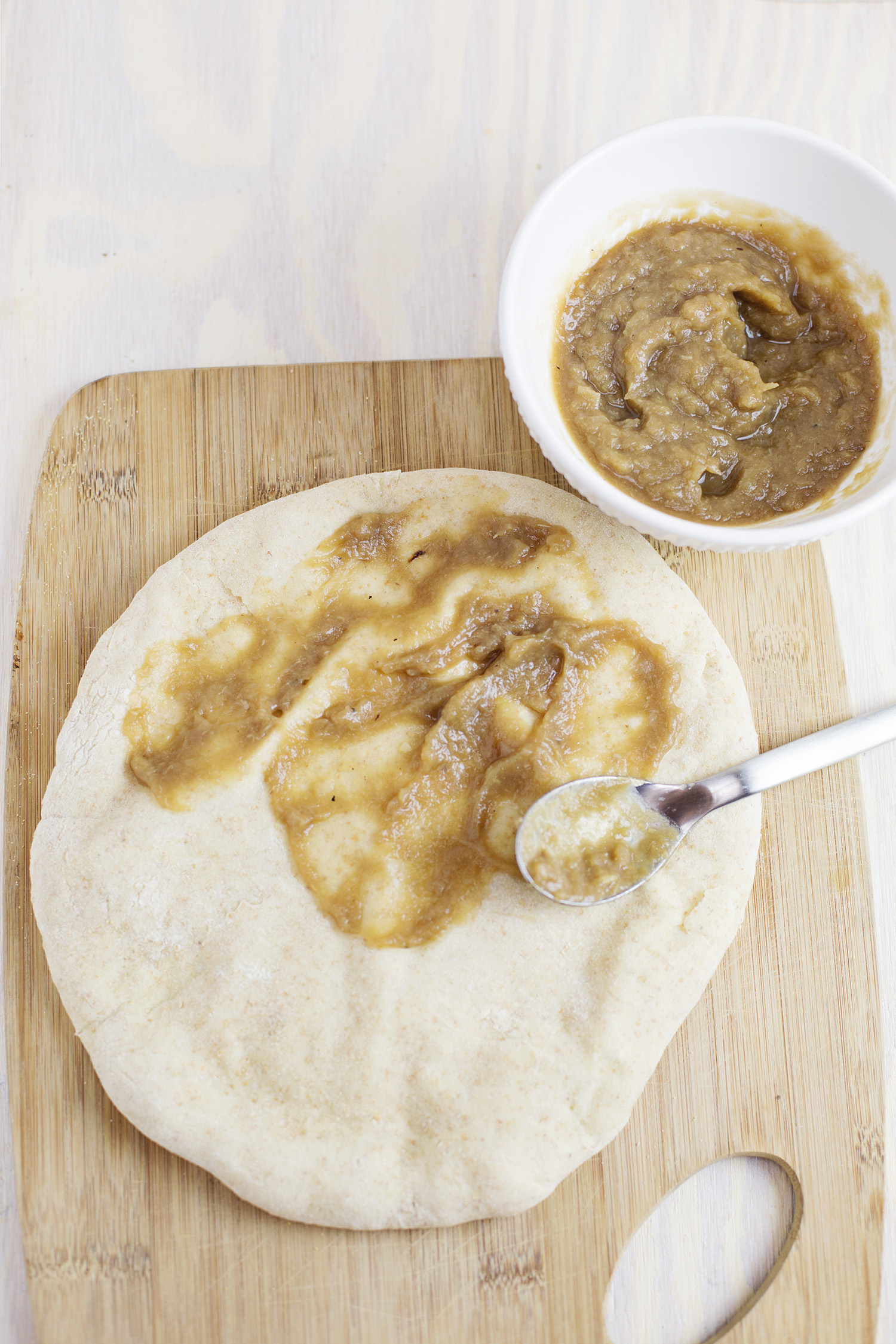 Allow to cool enough to handle. Add the onion to a food processor. Remove the now soft garlic cloves from the papery outer skin and add this to the processor as well. Then add one tablespoon of balsamic vinegar. Process until smooth. Taste and add a little salt and pepper. 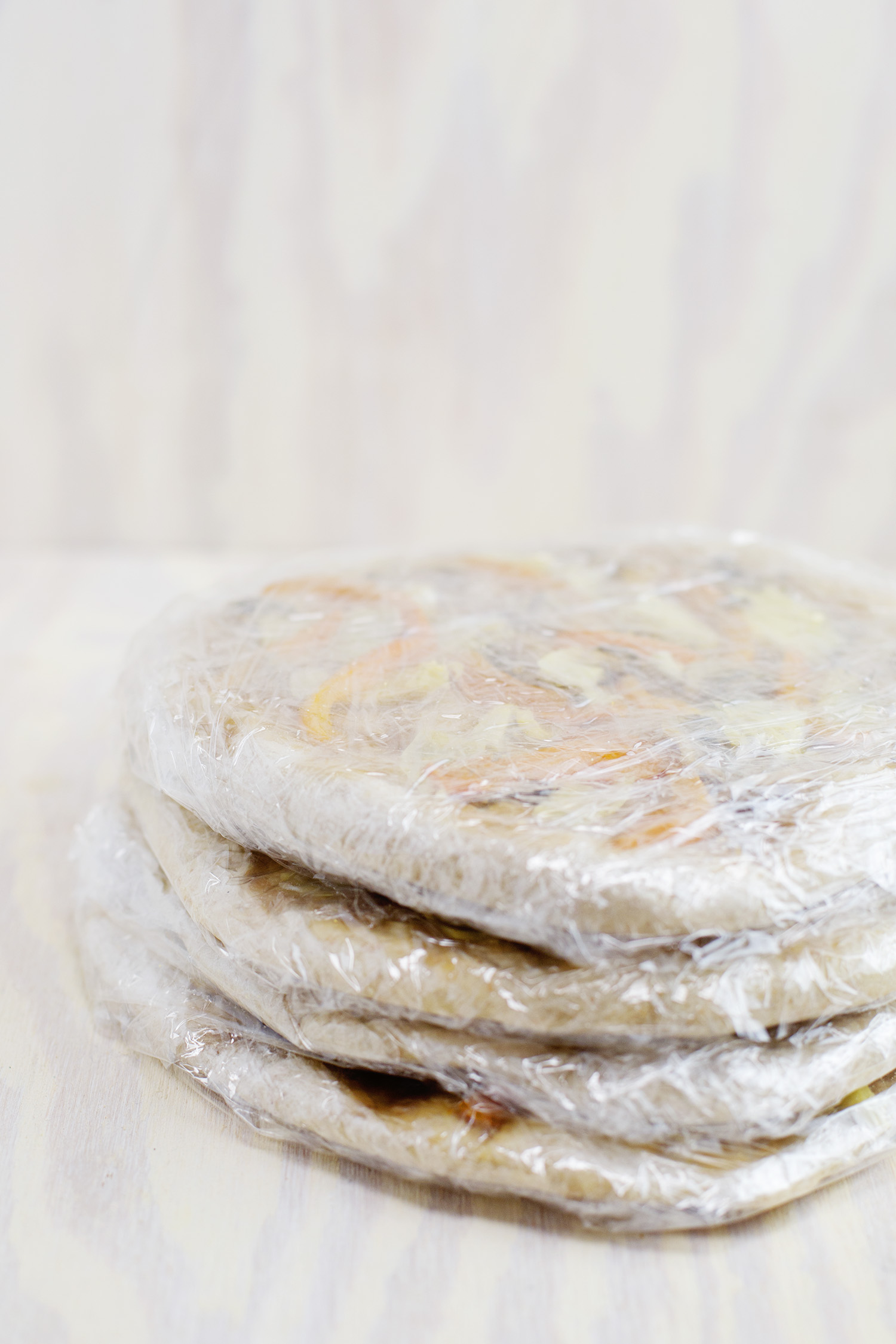 You’ll also want to partially cook your veggies for the topping as well. I sautéed mine in a lightly oiled saucepan just until soft. If you’re using mushrooms, be sure to pat dry before adding to the top of your pizzas as mushrooms will release moisture when cooked and you don’t necessarily want excess moisture on top of your frozen pizza.

Once the crusts are partially baked, the onion spread is made, and the topping vegetables are partially cooked, it’s time to assemble your pizzas. Then tightly wrap in plastic wrap and freeze. 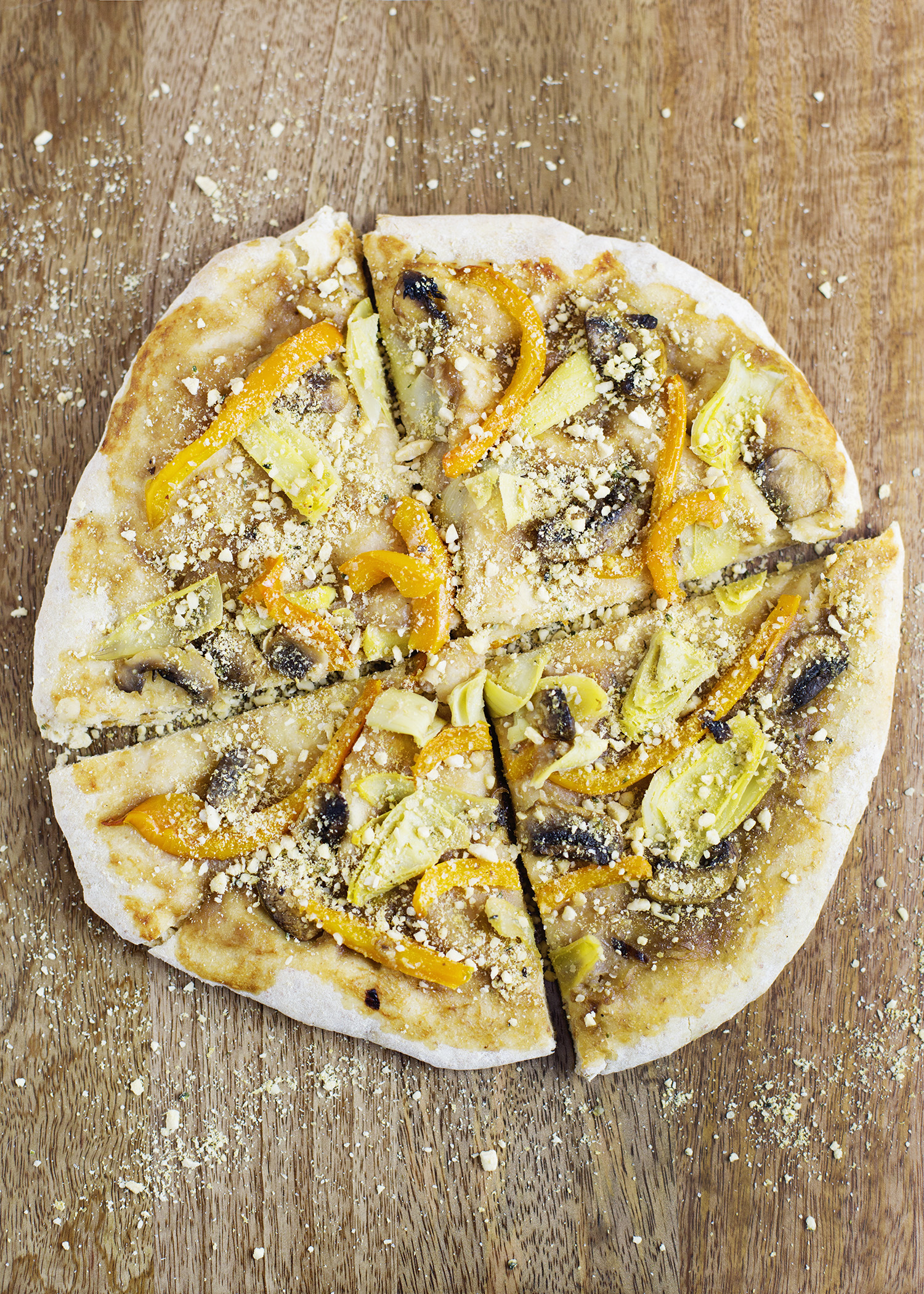 When you are ready to cook one, remove it from the freezer an hour or so before you plan to bake it, or you can move it to the refrigerator in the morning if you plan to bake it that night. Bake at 400°F for 18-22 minutes. Top with some vegan Parmesan if you are so inclined. You can buy this or make your own (I’ve been experimenting with different versions, but one that’s great is Dana’s recipe). Happy frozen pizza dinners! xo. Emma

I made this today for lunch. The sauce is very close to what I remember on the pizza. I added red wine to the packet while roasting the onion and garlic. Also added a little nutritional yeast and a squirt of tomato paste. I opted for a completely whole wheat crust and improvised the toppings. Thanks for posting this so I can keep that sauce on rotation!

I have the same one and I got it at Gordmans!

Heart eyes for the pictures of this post! Looking way too good, as usual ;). Keep it up!
Brechtje X

I always use scissors if I don’t have a pizza cutter on hand. Looks great

Recipe looks amazing. But just curious about why you called it onion spread vs. garlic spread, given that 3 heads of garlic beats 1/2 an onion!

Who Let the Mum Out?

I love this idea! I’ve never tried those frozen pizzas, but I want to now! These sound so good. The smell of garlic and onion cooking is my favorite, so excited to try these.

This pizza looks so yummy! Great way to save time and money.
Manique
www.poshmodeave.com

This looks pretty basic to make but looks so tasty and yummy! Thanks for sharing this recipe!

This looks so yummy! We’ll have to try it for dinner soon!

I will make this frozen pizza for sure. It sounds so delicious.
The vegan Parmesan from Dana is awsome. I already made it and I am in love with it.

This looks so amazing! Really want to try this recipe out soon. This is easy to make and looks so healthy. Thanks!

Looks delicious!! I’m always trying to find yummy ways to cut out the cheese in my diet!
Kisses,
Sarah
EverydayStarlet

Ha, I was thinking the same thing about the pizza cutter! Can you tell us where you got it?? Thanks! -Trisha

Truthfully, this post caught my eye because of that adorable pizza cutter! Love it and the pizza looks delish too!

I would love to hear the ABM team’s process of making blog posts. Like you said you tried out a few different recipes before sharing…is there ever a point where a recipe you try just doesn’t cut it after 3 or 4 attempts? I think it would be so insightful to hear what projects y’all really push through on and the ones you try and take off the blog post list. Also, who gets assigned what and how much time they have?

Honestly, I never thought about making pizza and freezing it to eat later (it usually ends up eaten right away). But this is an amazing idea for days when I don’t want to cook, thanks for sharing this!
https://www.makeandmess.com/

I loved this recipe! It’s kind of new to me a frozen pizza but it seems so delicious!
I need to try. 🙂
http://www.loveandeverythingblog.com

This looks and i bet TASTES heavenly too!