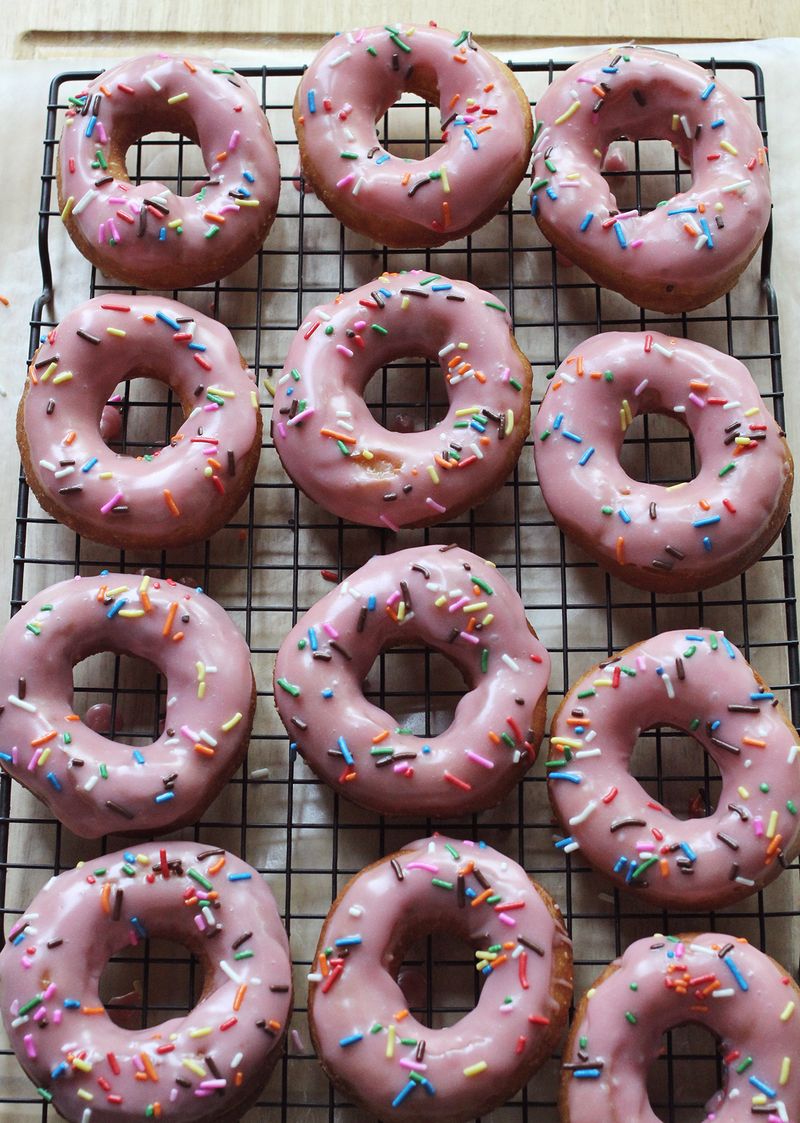 I've been watching the Simpsons since high school. I always thought there was a decent chance that it was based on Springfield, MO (our hometown). Except we don't have a nuclear power plant like the one Homer works at or a nearby ocean or a neighboring town called Shelbyville. Turns out 34 states in the U.S. have a Springfield, so Simpsons is probably not based on ours. 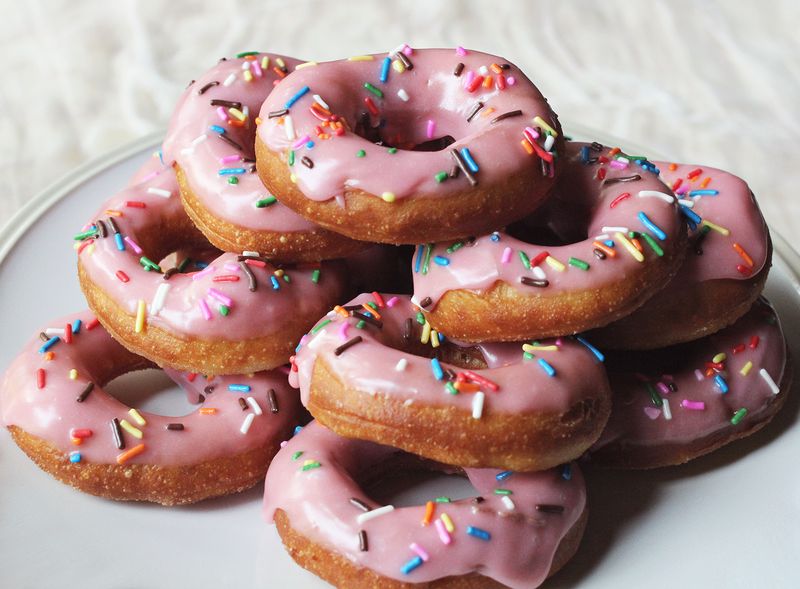 The reason I'm thinking about the Simpsons is because I took these donuts to the office, and everyone was immediatley like, "Homer Simpson donuts!"

What I love about these donuts (other than the fact that they look like Simpsons donuts) is the batter is made with cream so they are extra rich. And the glaze is made with a little raspberry juice, instead of food coloring, giving the glaze its light pink color. They don't really taste like raspberry though, just FYI. 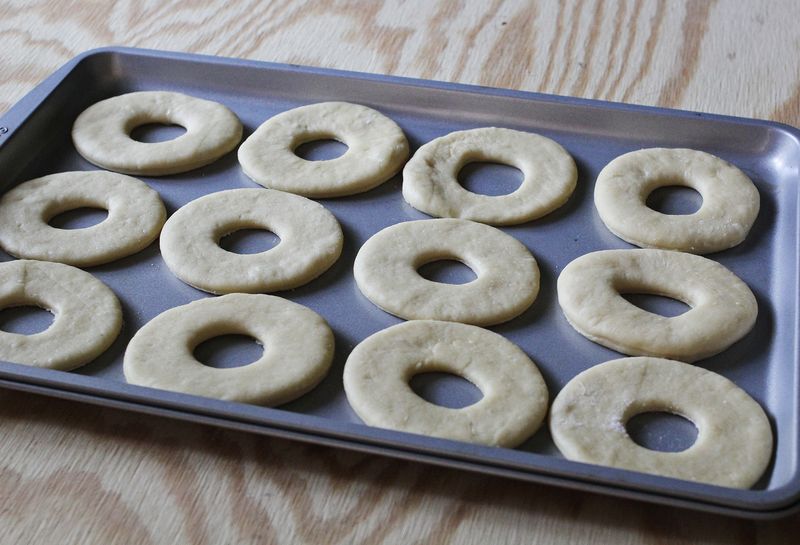 First combine the 1/4 cup warm water and yeast. Give it a few stirs and allow it to sit and bubble for a while. In a large bowl (or the bowl of your mixer) combine the oil, cream, sugar, salt, cinnamon and vanilla extract. Pour the 2 1/2 cups boiling water into the cream mixture and stir to combine. Allow that to cool to room temperature. Stir 1/3 cup of the cream/water mixture in with the egg yolks. Then add the egg yolks to the entire mixture. Begin adding the flour, 1 cup at a time, stirring in between or with your mixer turned on low, until you've added all the flour, and the dough comes together. This dough will appear quite wet and sticky. Move the dough to a lightly oiled bowl and allow to rise in a warm, draft free place for 1 1/2 to 2 hours. I will sometimes turn my oven on low for a few minutes, then turn it off a few minutes before and store dough that needs to rise in there. You don't want the oven to be hot enough to bake the dough, but the warmth will help it rise.

Divide the dough in half and turn out on a lightly floured surface. Cut out your donuts (and holes! Don't forget the donut holes!) and place on a few baking sheets. Cover and allow to rise for another 30 minutes. 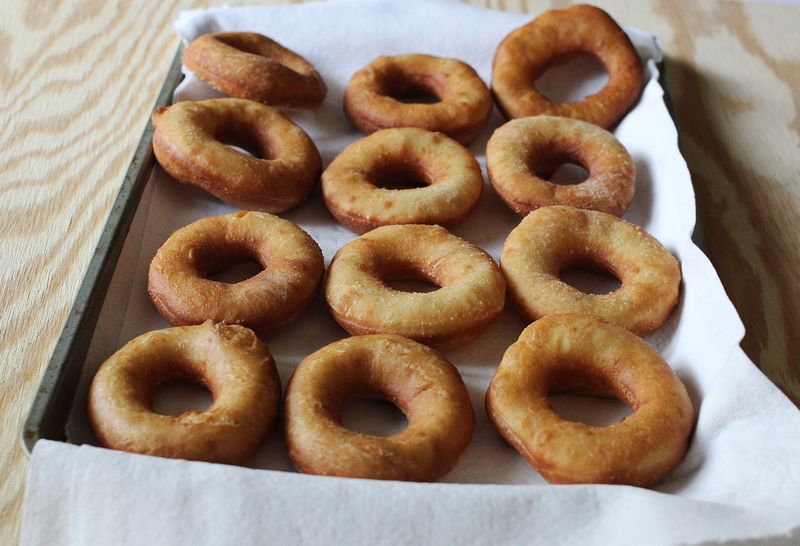 Fill a large pot with enough oil that the donuts can float and heat the oil to around 350°F to 375°F. I use a candy thermometer to check my oil. You can also test the oil by frying the donut holes first. You want the dough to cook all the way through within 30 seconds on each side, without burning. Once your oil is ready, start frying those donuts! After frying remove them to a plate or baking sheet covered in paper towels to soak up any excess oil.

First extract the raspberry juice from a heaping handful of raspberries. Place them in a mug or small bowl and microwave for 10-12 seconds to soften them. Press through a fine mesh seive to remove the seeds. In a pot over medium heat combine the butter, milk, raspberry juice, corn syrup and vanilla. Stir until melted. Then turn th heat down to low and add the chocolate. Stir until melted. Remove from heat and begin whisking in the powdered sugar, 1/2 cup at a time. Allow to cool slightly before use. 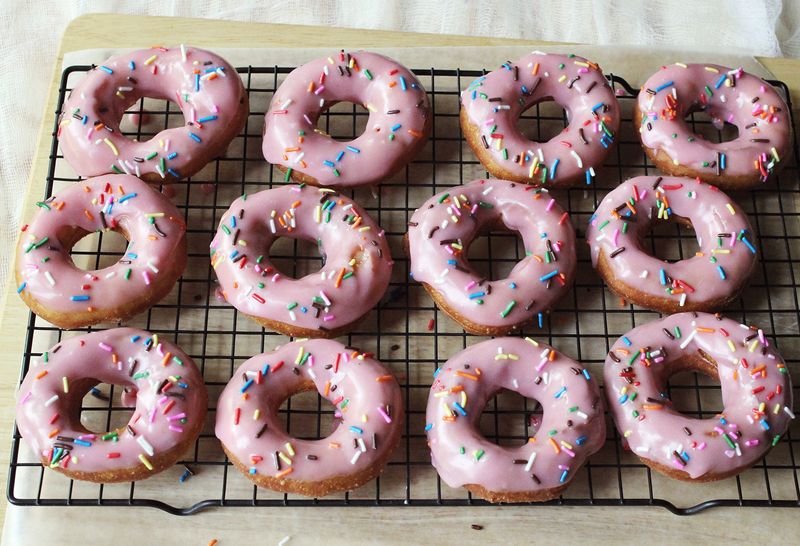 Dunk the donuts in the glaze and then place on a cooling rack. Add sprinkles. You have to. It's part of the recipe. I swear. Now devour the donuts. Don't tell anyone how many you ate. Take the rest to friends. These are best eaten the day they are made, so don't be afraid to share. 🙂 Enjoy! xo. Emma