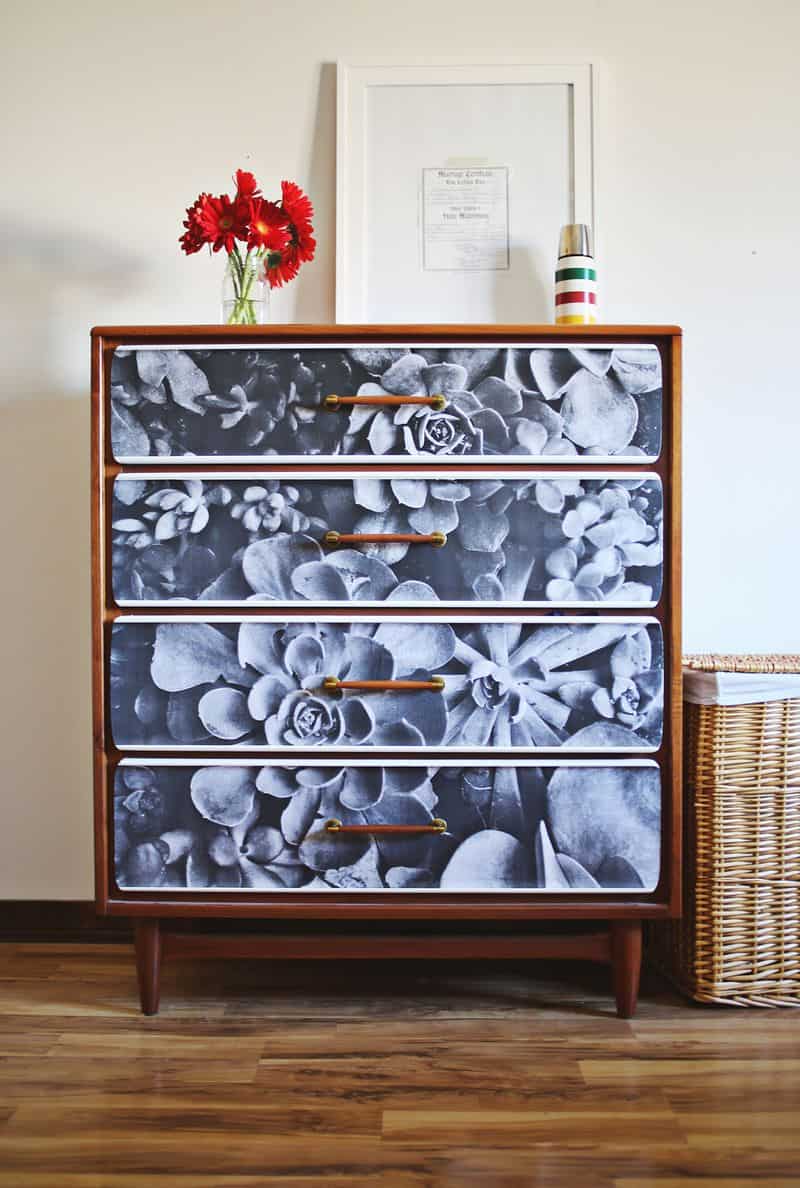 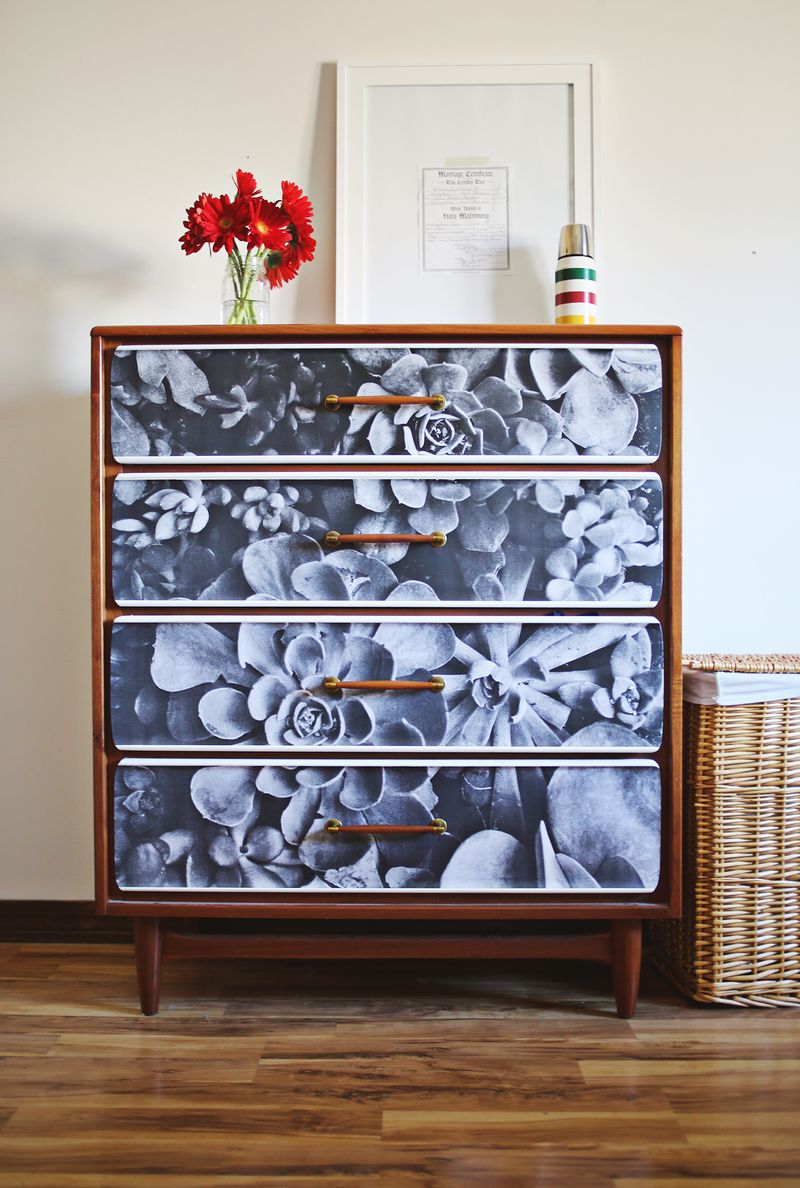 It’s been too long since we updated you guys with another edition of “how’d it hold up?” In case you missed the last two (here and here), the idea is I’m going to go through some past DIY projects and talk about how well they held up over time. A common question we’ve gotten over the years is something along the lines of, “Did that last?” “Did that wear out quickly?” “Did you end up loving that for long?” Etc. Some of the answers might just surprise you. 🙂

First up, the above pictured DIY Photo Decoupage Dresser. This dresser is currently in our bedroom, and we not only still love it, it’s held up really well. We moved last year, and I was a bit concerned that the edges of the photo might wear off or begin to peel with the move (or just from regular use), and so far they have not. It’s been almost two years and the photo, sealer, and dresser look basically the same as the day I added the decoupage—pretty good! I have thought about painting the white edges of the drawers black instead, just because I think it might go better with the current style of our bedroom, but I may not too. We’ll see. 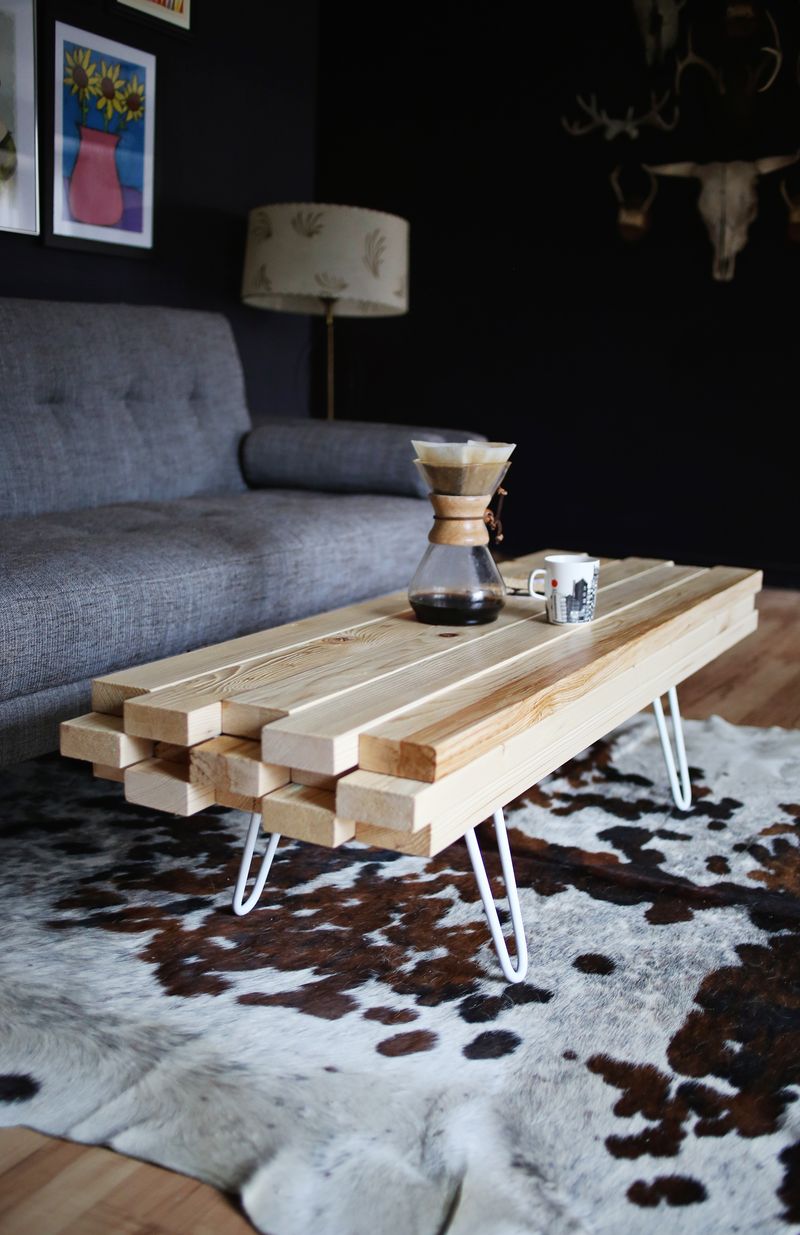 Trey and I built this DIY Wooden Coffee Table two years ago, and it’s still in our living room and looking pretty good. You might have seen it in my living room progress report post. I painted it a kind of reddish, orange-ish color. I regret painting it as I think I liked the raw wood color a little better. Oops. But structurally and the overall style of this coffee table has held up really well. So I would totally still recommend the DIY… just not the paint job I added later. 😉 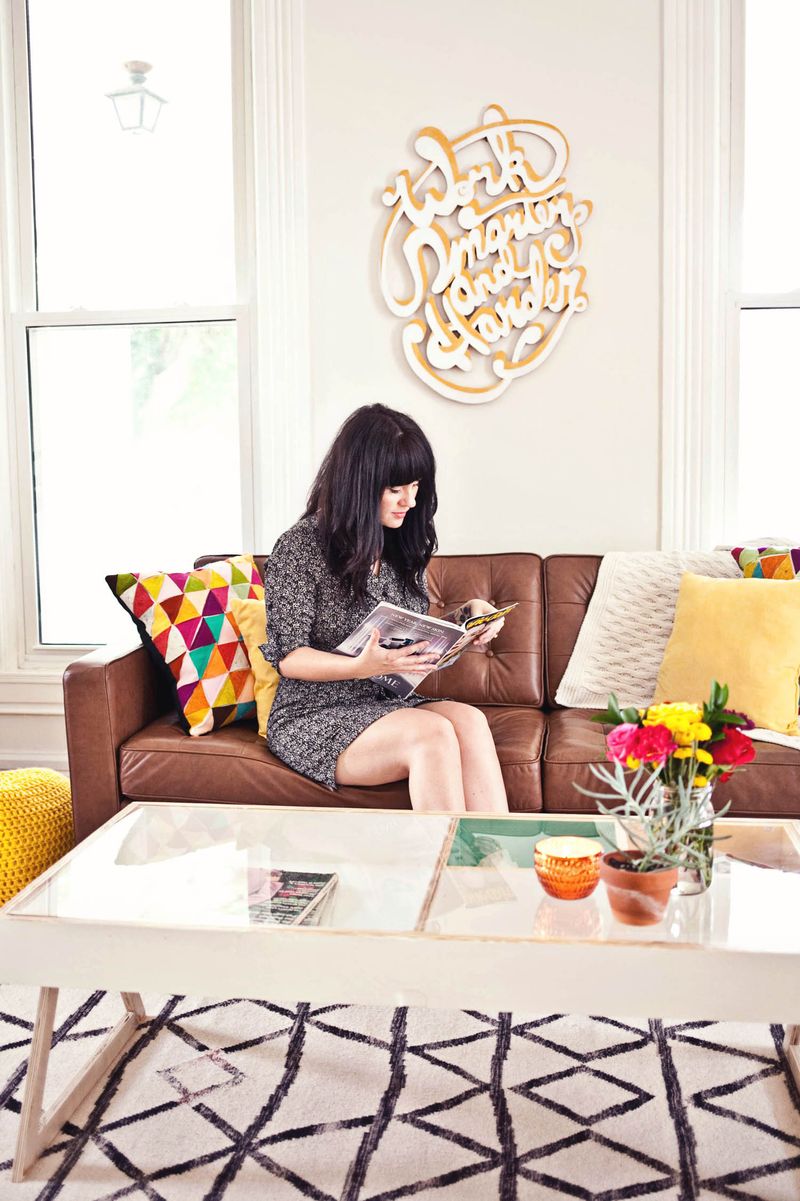 The very talented Josh Rhodes built this acrylic top storage coffee table for the studio house back in late 2014. I can’t believe it’s been that long because it still looks just as good as the day he made it! It’s currently in the ABM offices in downtown Springfield, MO.

And one quick side note: Josh (and Sarah) Rhodes recently started flipping houses and currently have a BEAUTIFUL one on the market in Phoenix, AZ. So if anyone is looking to buy a home in that area this year, check it out! Sarah posts about it on her IG from time to time, and you can see her blog here.

These DIY circle frames were the first photos we hung in our home when we moved in late 2015. At the time I think I might have been a bit overwhelmed by all the change and busyness in my life then because I remember thinking something along the lines of: no one is going to like these, they are too simple, you should just quit blogging.

I know, right. Stressed out Emma can be harsh. 😉

But these are hanging in our entryway, and I walk past them pretty much every day, and I’ve got to say, I think I like these even more now than when I made them. Yes, they are simple. But I guess I like the simplicity, and the shape is a bit different than any other framed picture we have in our home, and I like them. They are holding up well too, which probably isn’t too surprising as it’s one of those projects that doesn’t get much “wear” of any kind. So it’s likely to last as long as I still love them. 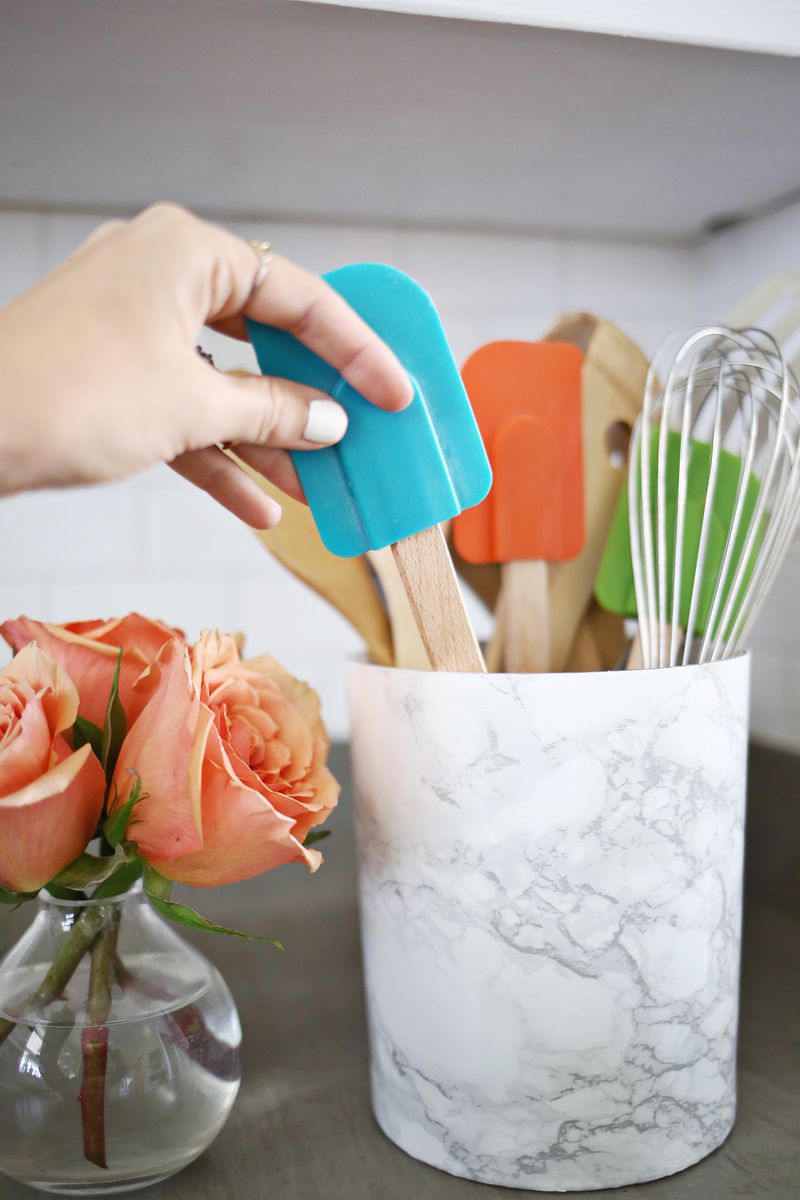 Laura created this stylish Marble Utensil Holder for the studio house kitchen back in 2014. As our offices moved and half the team headed to Nashville, I ended up inheriting this little guy, and he’s currently on my kitchen counter holding all my utensils. I’m happy to report it’s holding up great, and I’m just praying that marble never goes out of style (that’s not possible right?) because I love it. 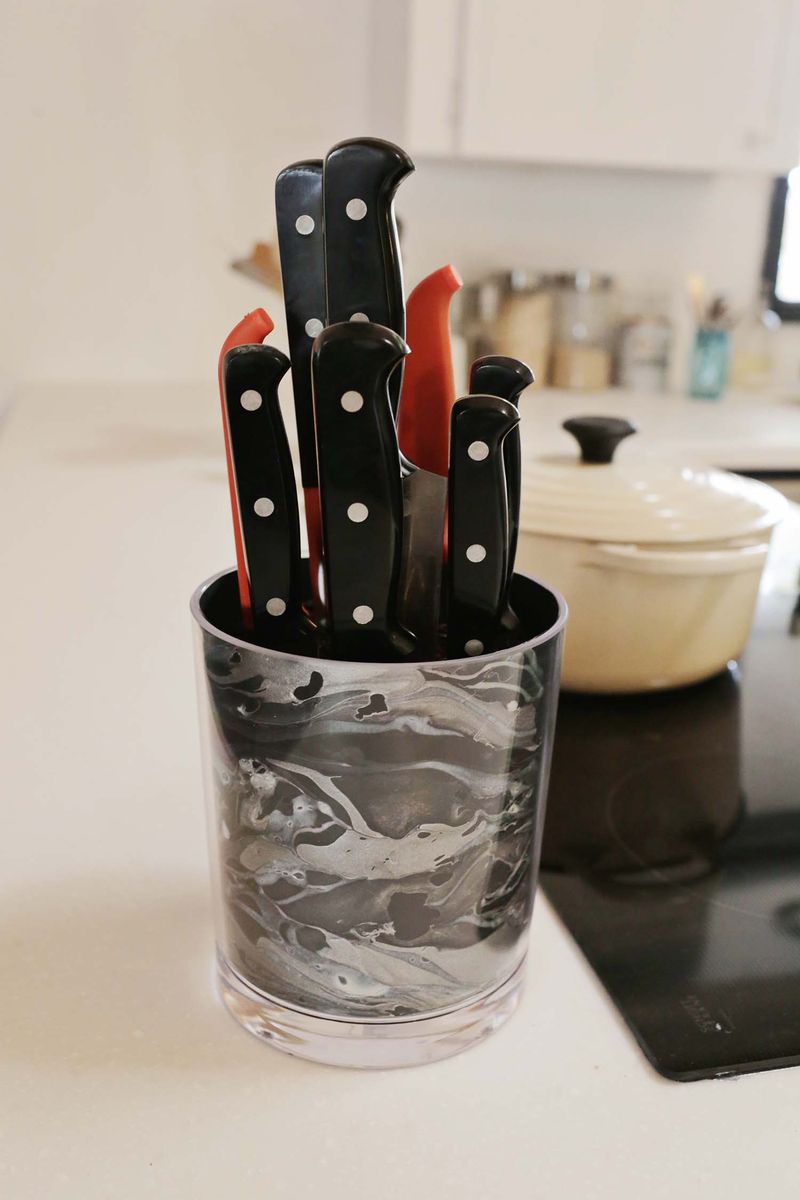 I created this marbled knife holder to match the utensil holder I inherited. It’s holding up really well too. It’s been over a year, so maybe I should replace the rice inside? Nothing seems to be sticky or smell or anything, but that would probably be good to do now and again anyway. When I posted this, it was a touch controversial as some readers thought that storing knives in rice like this is bad for the knives. And I’ve gotta say, that could be true? I’m not sure. I haven’t noticed any major additional wear on my knives outside the ordinary. So, although I guess I’m not sure if this is “correct”, it is something I would recommend to a friend since it works well for me. So… I’ll let you decide where you stand on the controversy for yourself. 🙂 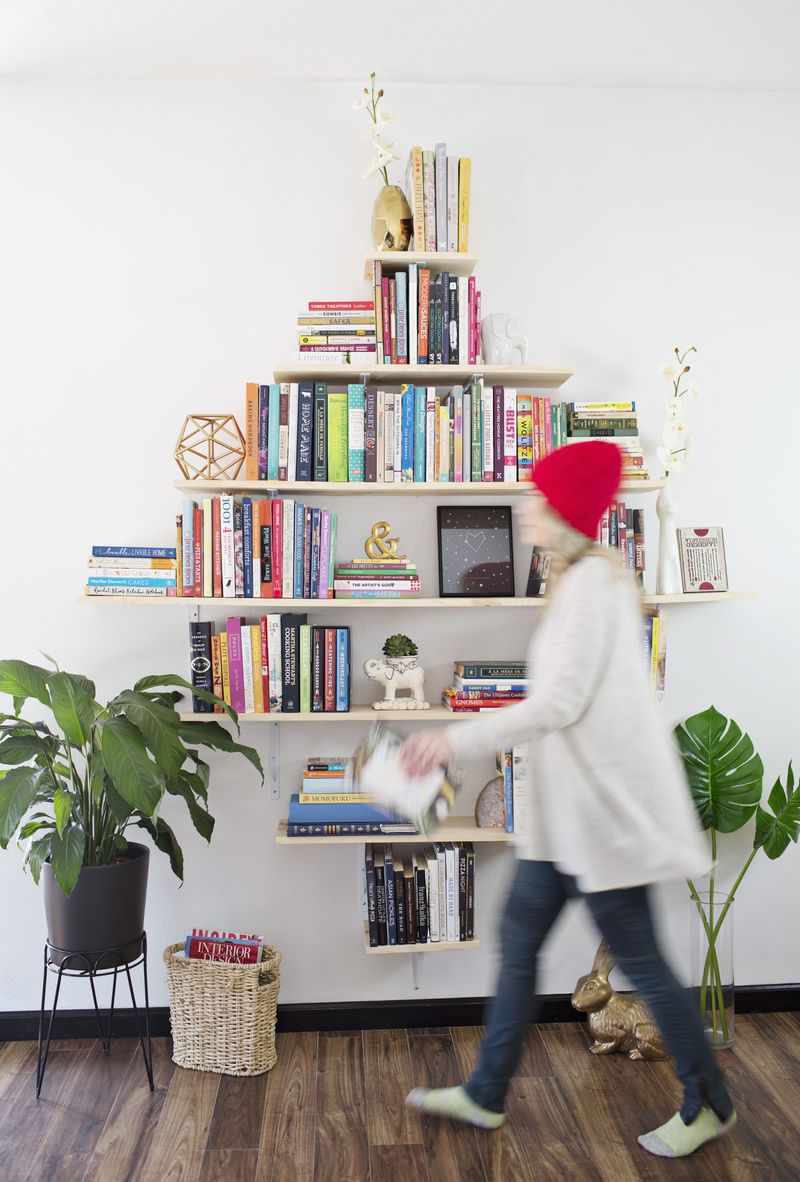 Here you can see my DIY diamond shaped bookshelves that we installed in our living room last year. I’d have to put these in the “didn’t go over that well” category for two reasons. First, I did end up needing an additional bracket than what I originally used as the longest (middle) shelf began to bow under the weight of the books after about a month. So, I’m gonna go update that post with that info for anyone who might be making these in the future. But the second thing is, I just didn’t end up keeping these for that long. Mainly, I have too many books to fit on the shelves, and it started to feel too full too quickly (I am an AVID cookbook collector). And I just ended up wanting something a bit more substantial feeling and a little more polished. So we ended up getting some large, black bookshelves from IKEA that I ended up liking more. Live and learn. 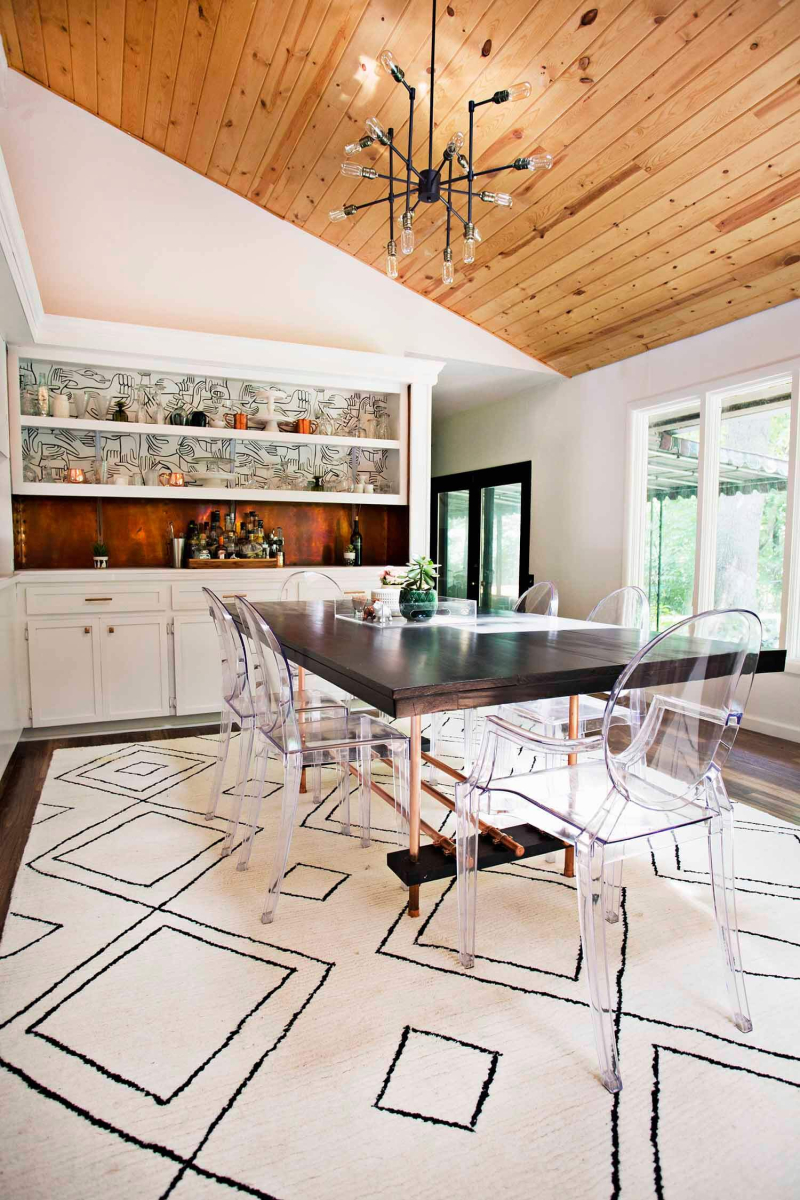 OK, so I actually wrote about this DIY dining table in the last volume of this series. BUT, I thought I’d update you again just because I painted it black some months ago (which you can see in my dining room progress report), and I still LOVE it. Plus it’s still looking really good since it was built in April 2014. Building your own dining room table is one of the easiest and most impactful DIY furniture projects because it can really save a pretty penny, and they LAST. 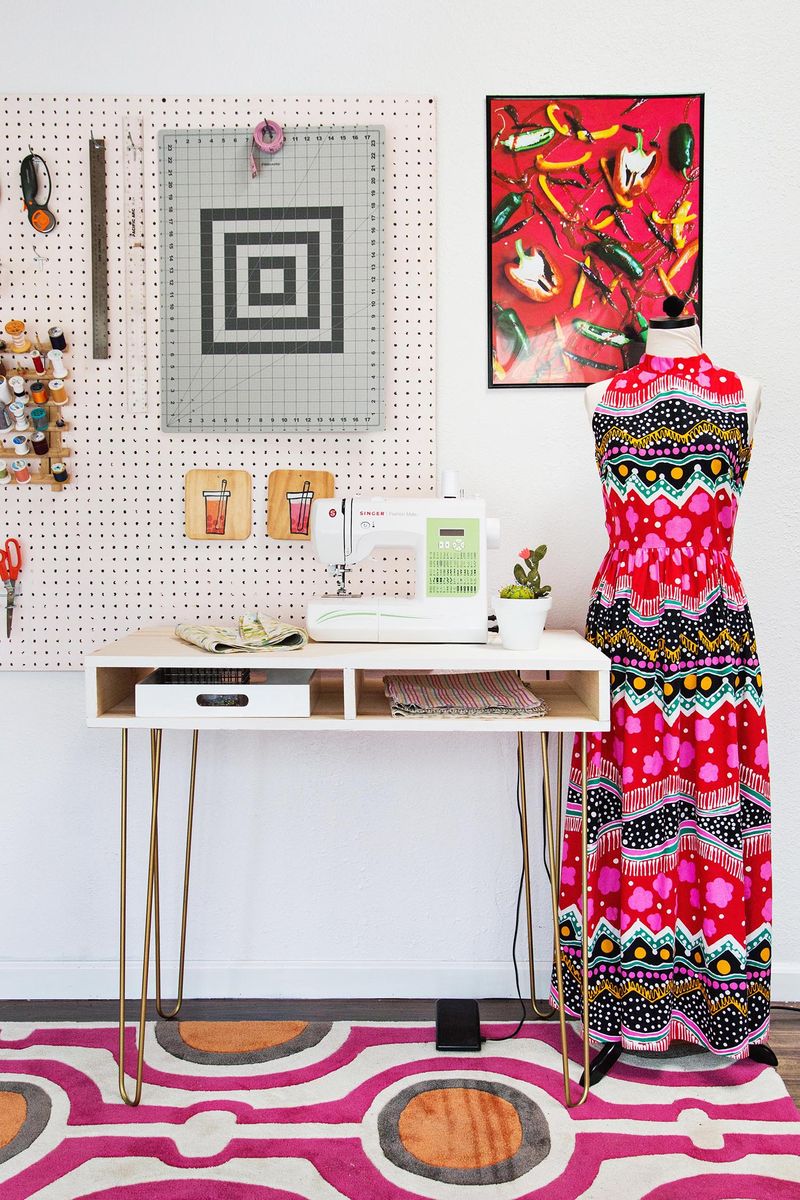 And here’s my easy, DIY sewing desk. This lasted just fine, but I ended up changing up my office space with a long desk similar to this DIY standing desk (but it’s chair height, not standing), so I didn’t keep it. I did take the legs off and save those though as you should never waste perfectly good hairpin legs! So those are just sitting in my garage waiting for a new project idea to strike. 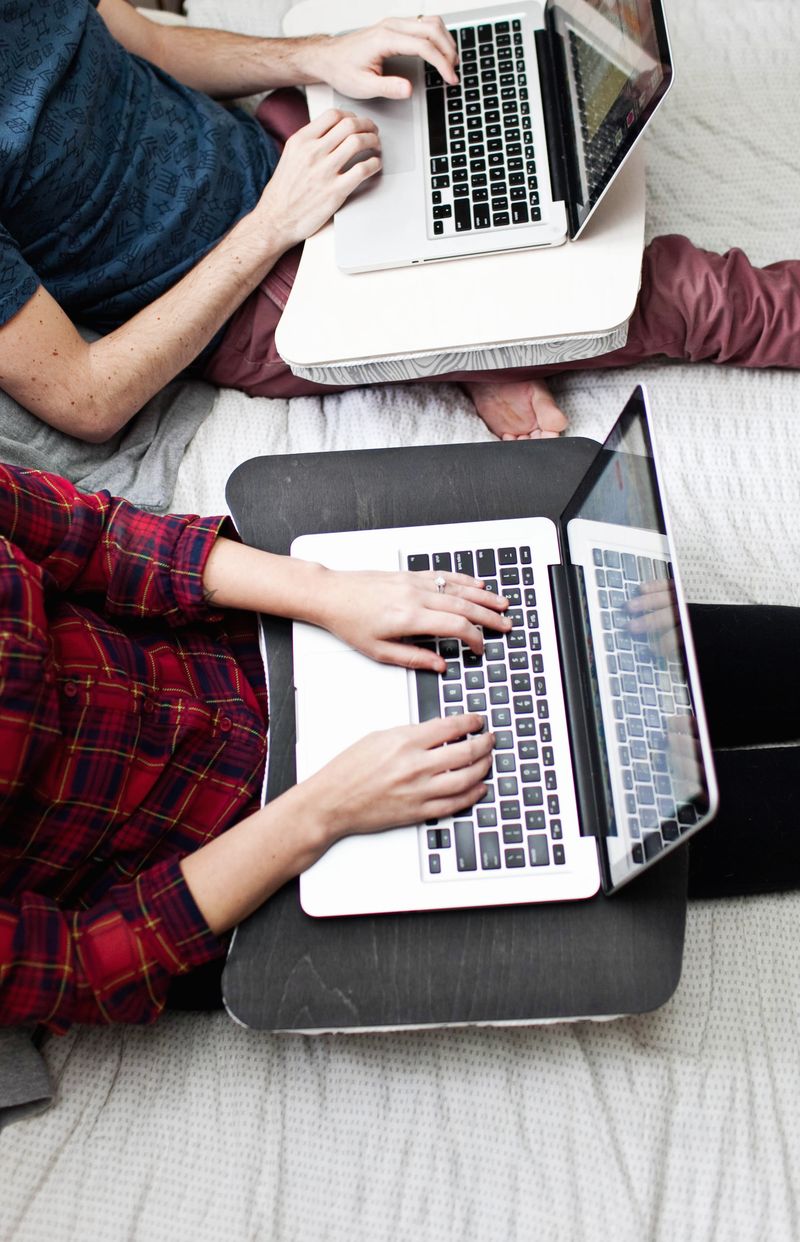 I’ve been a little surprised by how well these DIY lap desks have held up (it’s been almost two years since I made them). After we moved to our new house, we have so much more space that neither of us really uses our computer in bed anymore (I have a home office and Trey has his own room for music, and we just have more counter and table space than our last home did). So, that could be part of the reason. But I was afraid they might fray or just start to come apart too quickly, and they have not. They are currently sitting on our bedroom floor, leaning against the wall. I still think these are really cute even though we don’t use them much anymore—would make a cute DIY present too since you could do any color or any fabric you like.

I truly can’t believe I made these tree stump side tables back in May 2013—it just doesn’t feel like that long ago! These still look really good, but I’ve been considering taking the wheels off the bottom and possibly adding some kind of small legs (like mini hairpin legs), or just leaving them without any legs as sometimes the wheels make them less stable. Other than that, these are probably one of my all-time favorite projects I’ve ever shared on ABM. 🙂 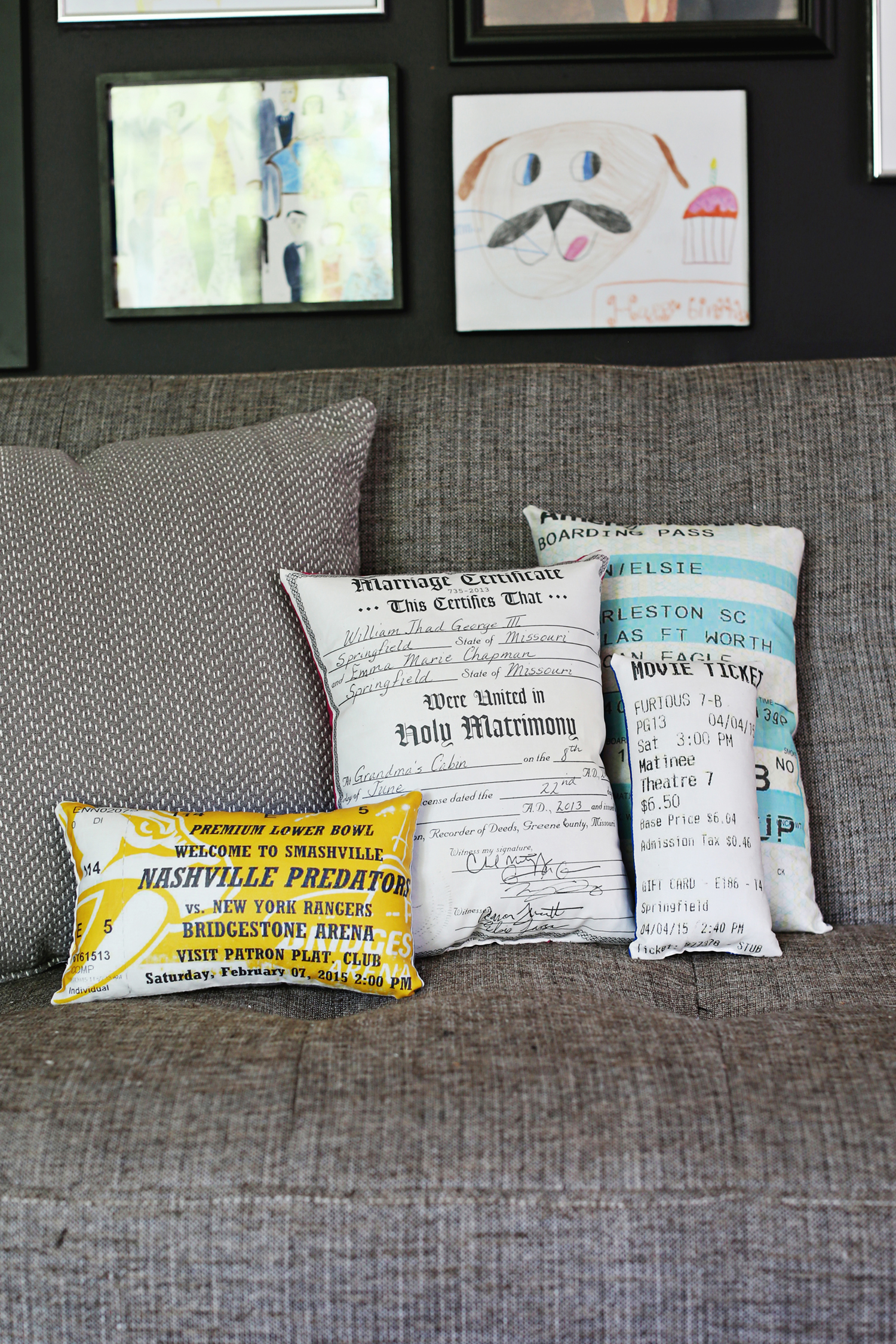 I created these document plush pillows a few years ago and still think this project is too cute. If I were making them again, I would probably make the cases either an envelope style or with a zipper so I could wash them. We let our dogs on our couch and chairs, so things tend to get a little dirty over time. So being able to wash these would be better for our household. 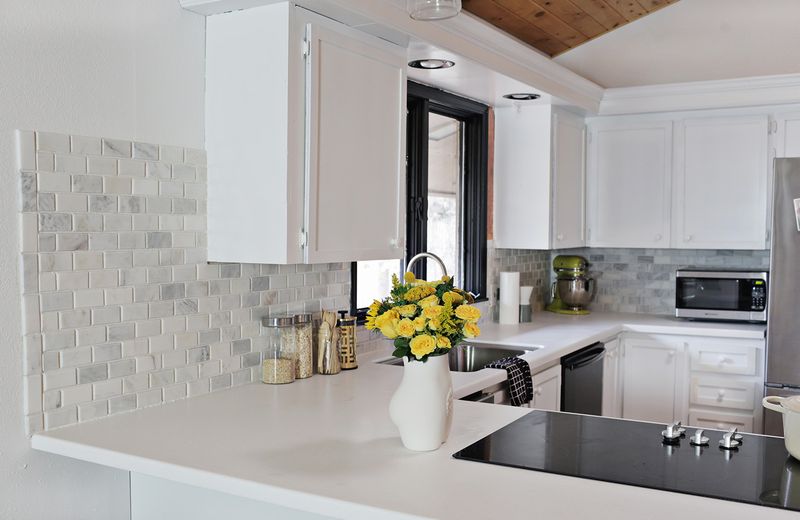 Trey and I decided to install our kitchen tile backsplash ourselves last year. That was probably one of the most physically demanding DIY home projects I’ve ever tackled, but it’s looking good, and we are still very much in love with the overall look—plus we did save some money installing ourselves. So, I would recommend it if it’s what’s needed for your budget. But it just might test your DIY patience, and it’s a doozy depending on how big your backsplash area is (also beveled edges make it tough!). Check the post though if you are thinking of doing it as I do have some tips that might help! 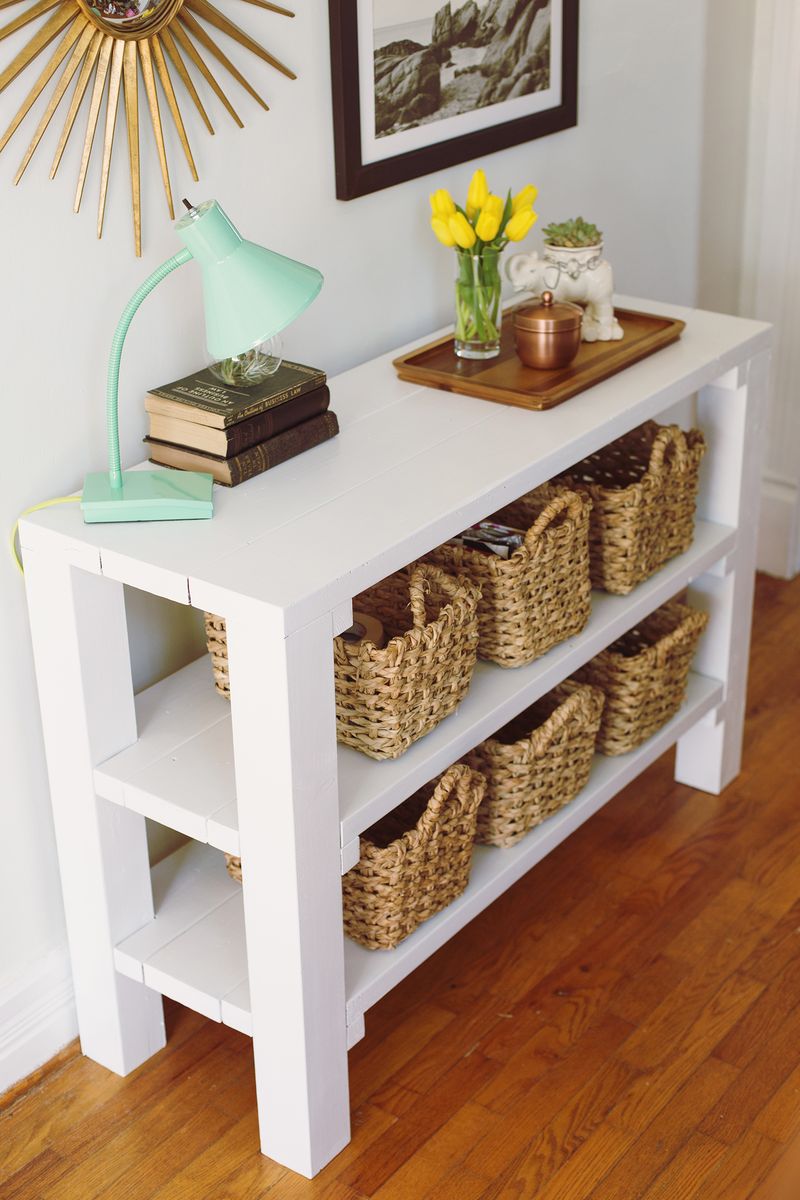 And last but not least is another project from Josh, this key throw entryway table. This table is super sturdy! This is another piece that I inherited from the studio house, and it’s currently what we have our TV sitting on in our living room. He’s still holding up like a champ, so that DIY is doing well. 🙂

Thanks for letting me share another edition of this fun feature with you guys! xo. Emma