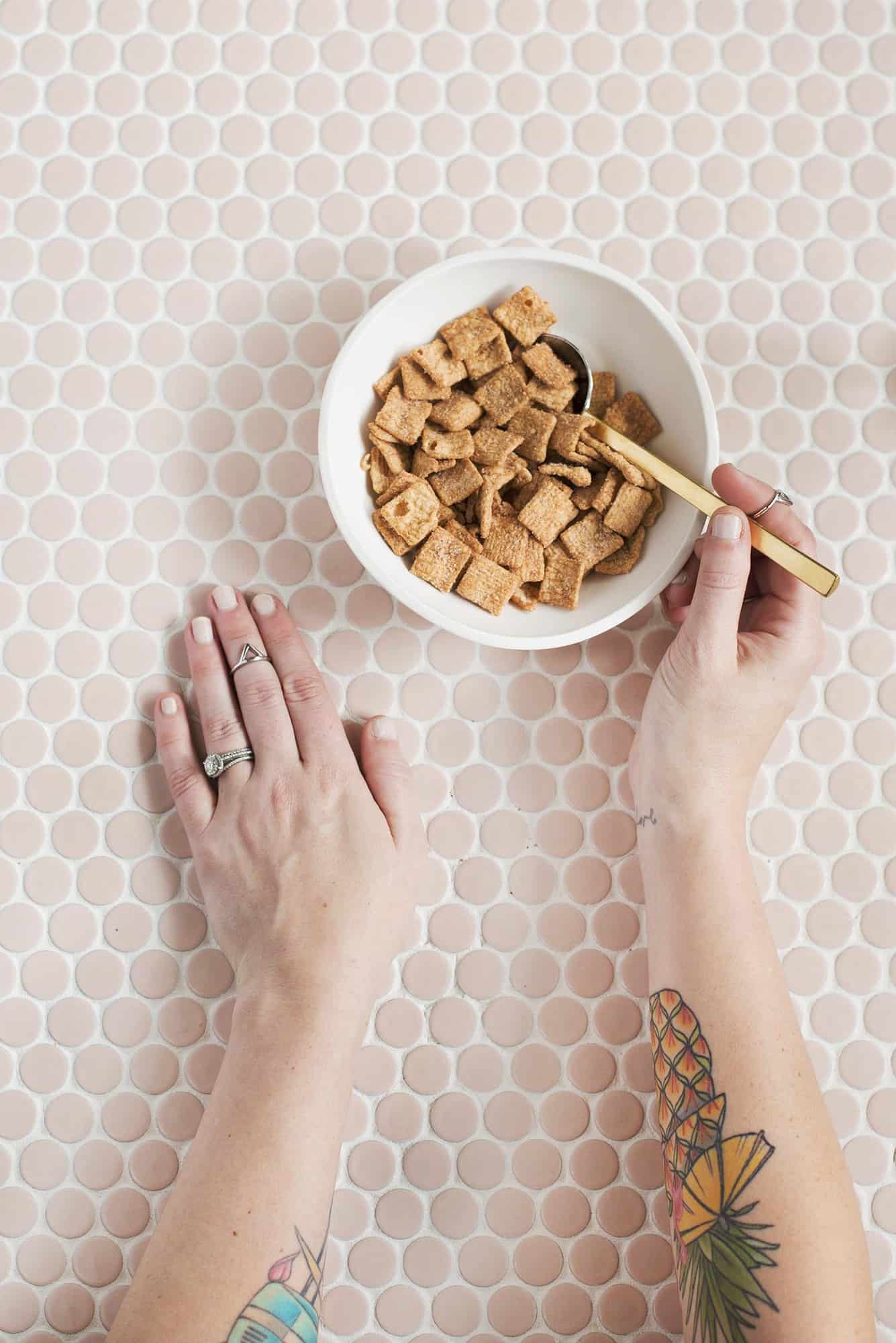 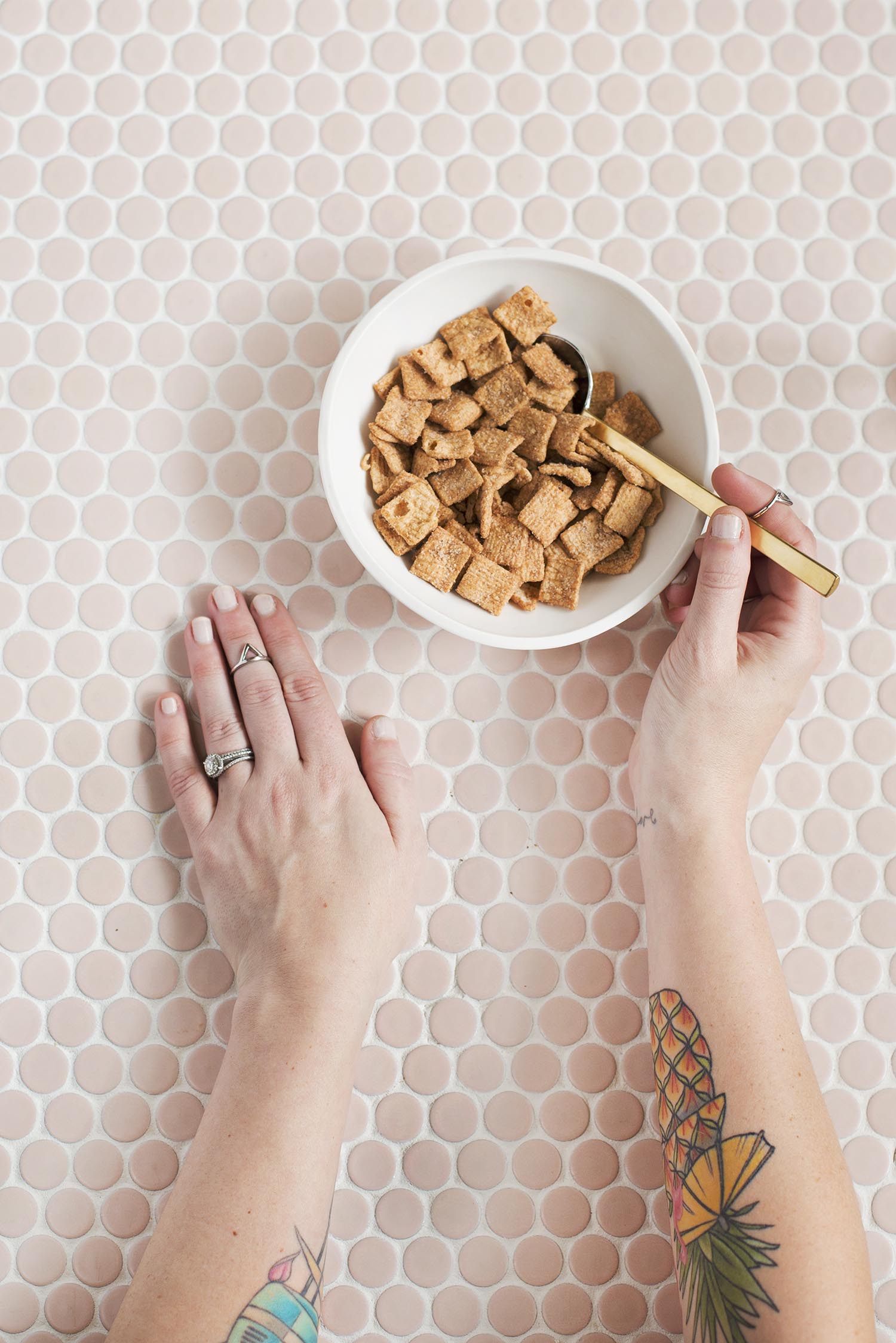 I recently mentioned in this post about coffee creamer that I had successfully stopped biting my nails all through March, and now into April too. Wahoo! I’ve even posted about it a couple times on IG in a “series” I’m calling nail updates.

It’s not really a series. I just posted about it twice. But I like the idea of making it a series. And I’m also quite shocked that I’ve been feeling OK enough to share about it online. Over the years I’ve usually tried to hide my nails in photos because I know I will inevitably have someone comment about how I should stop biting them or how bad they look. And for me, Internet-meanness only really hurts when I sort of agree with the comment. So I’ve felt really ashamed about this bad habit for a long, long time now and often try to hide it.

Anyway, I’ve had lots of people connect with me over nail biting from these posts. Apparently I’m not the only one who has struggled with this bad habit for years and years. And there are so many different suggestions and solutions out there to try, so I thought I’d share what has worked best for me. 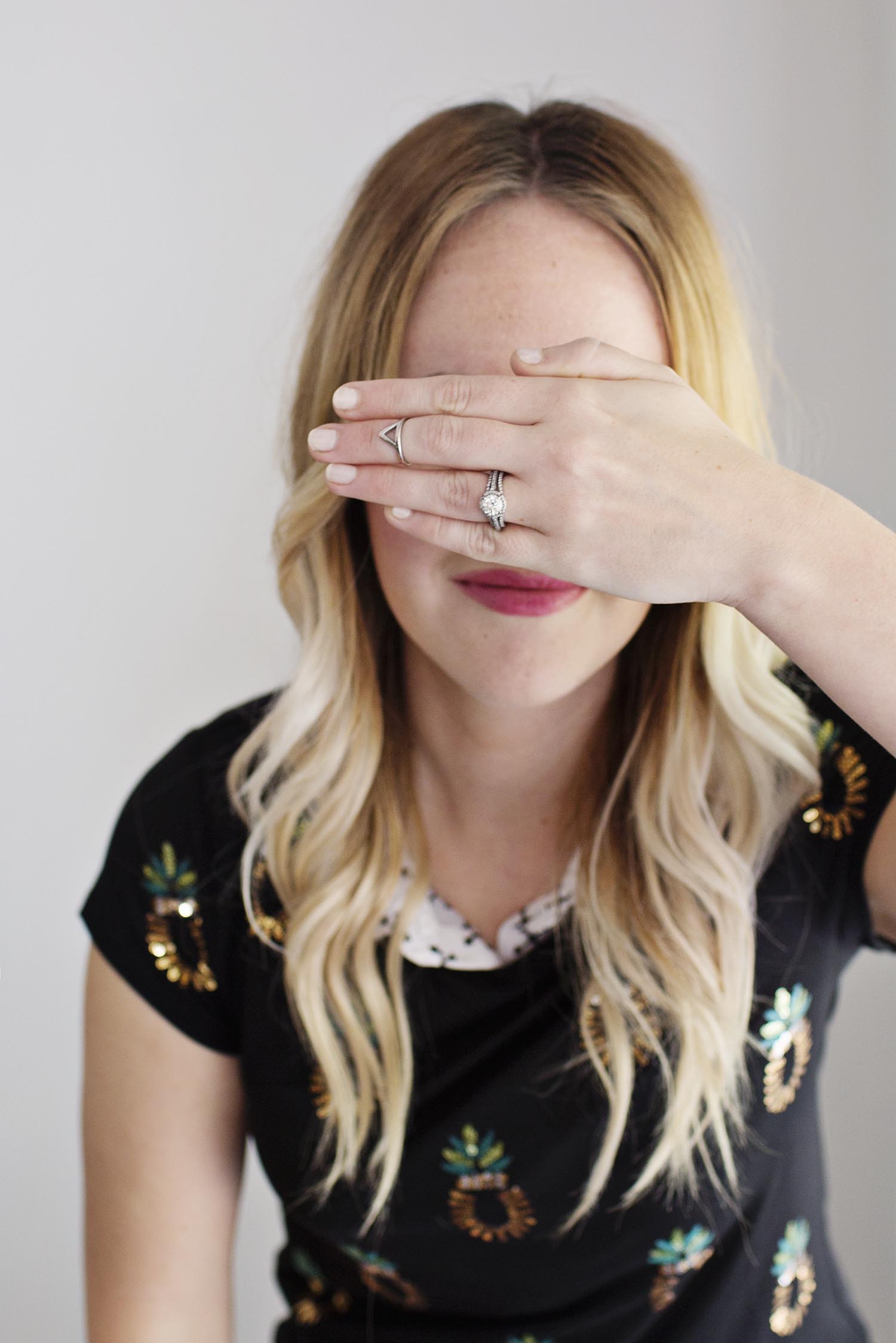 So for any of you that don’t know me, I’m Emma, I’m 30 years old, and I’ve been biting my nails for as long as I can remember. I have had a few times when I stopped for a month or more. The most successful I’ve ever been at not biting my nails was the six weeks before my wedding. I knew my hands would be in lots of photos that day (holding flowers, with my rings on, holding Trey’s hand, etc.), and I just didn’t want to have any of those important photos ruined for me because I hated how my fingernails looked in them. That motivated me enough to stop biting them long enough to grow them out at least some (enough that they weren’t completely terrible). But after the wedding, it did not stick at all.

I’ve tried lots of things over the years. I’ve been trying on and off to quit biting my nails since high school. I’ve tried fake nails, nail wraps, polish that tastes bad, getting a manicure, acrylics, wearing gloves a lot (I know, weird), and a few other random methods I either heard from friends or read online. I was sort of considering hypnosis but just didn’t trust it to work (apologies if anyone is really into that, I just didn’t think it would work for me). So… yeah… it felt like I tried almost everything.

Then a couple months ago, I was listening to a random episode of Gretchen Rubin’s podcast. Part of the episode touched on how we form habits and what makes us stick to habits. And the whole time I was listening, I kept thinking that maybe this could help me understand why I have this bad habit and what I can do to stop it. She has a new book out, Better Than Before, which I haven’t checked out yet, but it’s for sure on my list.

Anyway, the main thing I took away from it was this: I have a hard time following rules that I think are arbitrary (I’m a little bit of a rebel like that). I do well when I understand the goal. Like if my goal is to get an A in class, I can follow the rules or make a plan to get there (unless it’s math, then I’ll settle for a B). Even if it’s something I don’t really want to do, if I understand the big picture of why it’s important, I can generally make plans, goals, and habits that can get me where I want to go. The big exception for me is with things I deem arbitrary or unimportant. And I realized that I guess I put nail biting in that category. It doesn’t totally matter how your nails look, you will make it through life even with short, bitten off nails. I know this because I’ve done it for the past 15+ years. And when I’d hear someone say, in real life or on the Internet, something to the effect of, “You really should stop biting your nails,” or “Your nails look so terrible like that,” etc. there was a little voice inside me that kind of wanted to say, “So what? They’re my nails not yours, and I’ll do what I want.”

So then I thought I could just do some research and figure out why nail biting is so bad for you (health-wise, or otherwise) and maybe that would unlock the key. It wouldn’t be so arbitrary anymore; I’d have a real reason to quit. I read a number of articles online and everything pretty much said the same thing. Nail biting is bad because it’s putting your germy hands in your mouth. Gross (or possibly makes your immune system stronger? I read one article that said that). Also it’s possible that long term nail biting may cause your nail beds to shrink or your nails to stop growing, become weaker, etc. There were some health concerns with nail biting, but not really enough to deter me if I am being honest. I was hoping for something like, “Studies show that nail biters live an average of 10 years shorter than non-nail biters.” But I just didn’t find anything that seemed to suggest that.

And it was at this point that I decided I should just give up on trying to trick the rebel in me that nail biting was going to kill me. It probably wasn’t. So instead, I tried to changed my mindset towards the whole thing. I tried to make it less about following an arbitrary rule and more of a daily decision that I could choose or not choose to follow. Because the truth is, I do in fact like biting my nails. But I also like having longer nails. And these two things can’t coexist. So everyday I allow myself to decide which it’s going to be for that day only.

Everyday, especially when I want to bite my nails, I tell myself, “If you want to bite your nails tomorrow, you can. Just don’t bite them today.” And I really mean it. I figure that if a day comes when I really want to bite my nails but I don’t let myself and the next day I regret it, I wish I HAD went ahead and allowed myself to bite my nails, then I can bite them. Why not? It’s arbitrary anyway. But so far everyday that I don’t bite them, I’m glad I didn’t. So I keep going. But everyday it’s something I think about and struggle with a little. Especially if I’m stressed out or in a highly social setting, as those tend to really trigger this bad habit for me. 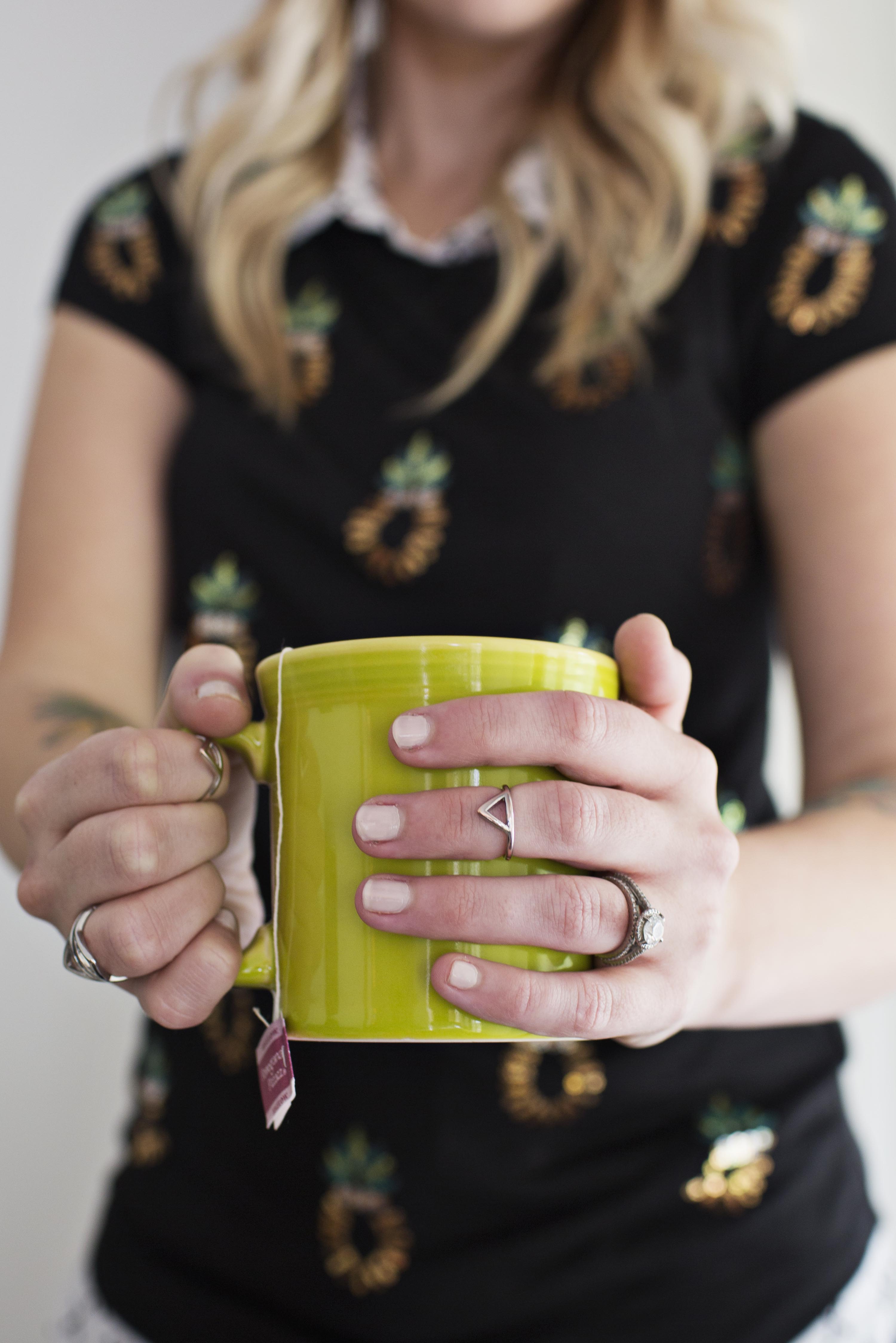 And that’s it. It’s pretty simple. I just decide everyday what I’m going to do, and I only stick to it for that day. Then it starts over the next day.

Will this work forever? I don’t know. My crystal ball rarely works.

Are my nails the most beautiful, longest nails in the world? No. I don’t think I have a future in hand modeling as a career. 🙂

Do I miss biting my nails? Yes. Often.

Am I happy, or at least happier that for now I’ve kicked this bad habit? YESSSSS. I feel SO proud, you guys!

I know it’s totally silly, arbitrary, probably temporary, and maybe even a little ridiculous that I’m even still struggling with this at 30, but – I feel so good that I’ve been able to stop this bad habit this past (almost) two months. I am really enjoying painting my long-to-me nails. I decided that if I go until the end of April without biting them, I’m going to treat myself to some new nail polishes. I’ve been wanting to invest in some natural polishes but haven’t wanted to spend the $$$ if I was just going to keep biting my nails and not really use the polish. We’ll see if I make it.

There you go, over 1300 words on nail biting. This has kind of been my nightmare post because I seriously hate talking about my nails. Ha!

Here’s to trying to kick old, bad habits! It’s hard. It’s embarrassing. But there you are. 🙂 xx. Emma