Woo hoo! This is our LAST Before post. I’m kind of excited to start the new year with nothing but progress to share!

I’m not going to lie, I saved this part for last because it’s kind of hard to explain. It’s just a LOT. We made the most structural changes (and definitely spent the most $$$$) on these two rooms. I cannot wait to share the progress with you soon because it’s very dramatic, and, on a personal note, it’s a dream studio for Jeremy, which really means the world to me!

I’ll back up a bit—when we started house shopping in the Nashville area, we looked all over for all kinds of houses…some that already had music studios built onto/into the house. But we never saw one that was an equally exciting house and studio situation. If it had a decent studio it was usually a really uninspiring house, and you know how much I love my big windows. 🙂 Since we both work from home, we wanted to find a space where we could both settle in, get really creative AND possibly start a family, too. That’s asking a lot from one house. So we decided to build the studio part from scratch.

As far as working at home, we realize that it’s always an option for Jeremy to work somewhere else, but in the last few years we realized that it would be best for our relationship and his work if he was in the home (or at least super close) because he often wants to work for just an hour at night or something like that.

Anyway! We fell in love with this house and realized that the small basement could be combined with the garage to make a good size studio with its own private entrance. We would have to lose the garage, which wasn’t our first choice, but we noticed when house shopping that a LOT of nice homes in Nashville have converted their garages into living spaces. And we have enough room in our backyard to add either a detached garage or nice carport in the future. So we went for it! 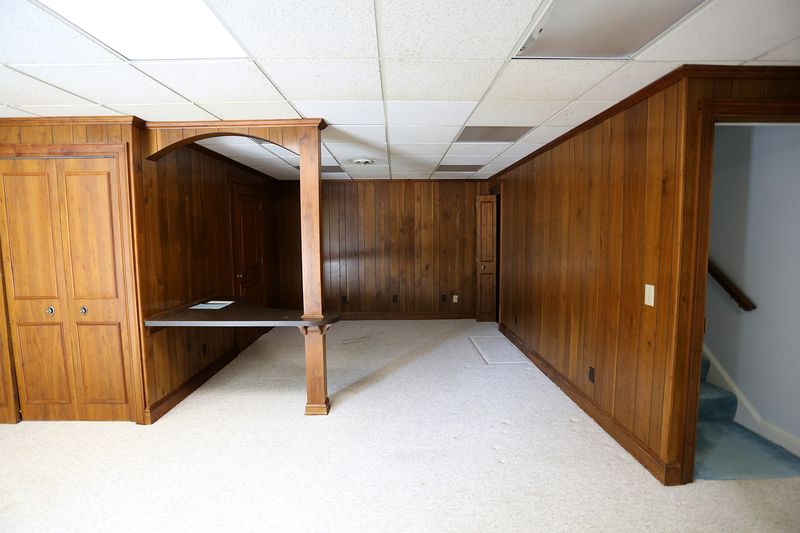 Let’s talk about the basement part first. This was previously used as a home office. It’s very small and was clearly decorated in the 1970s. You can see here that it has a stairway that connects to the upstairs. This office space had plenty of room to put all the functional elements into Jeremy’s studio (a vocal room, a drum room and a control room). But without the garage expansion, it would have felt too small and he would have lacked storage and a place for groups to hang out when recording (this is a very real need in a recording space, which I’ll explain in a bit). In addition, we really wanted to give the studio its own entrance, half bathroom and coffee bar so that his clients wouldn’t have to feel awkward coming into the house. 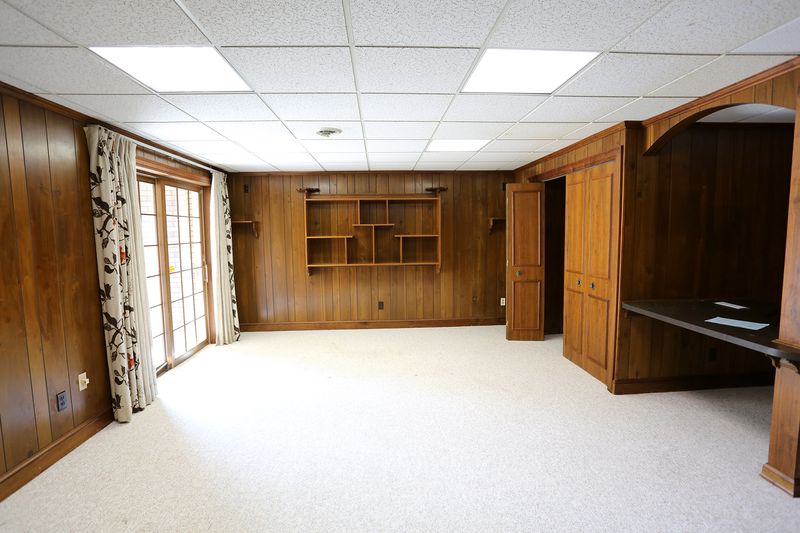 We wanted to get rid of these fluorescent lights and all the wood paneling. This door to the left went outside to a covered carport here. We decided to seal off that part of the garage (around the carport) with storefront glass (what you’d see at a store or restaurant) so you could walk through here to the left into more living space. 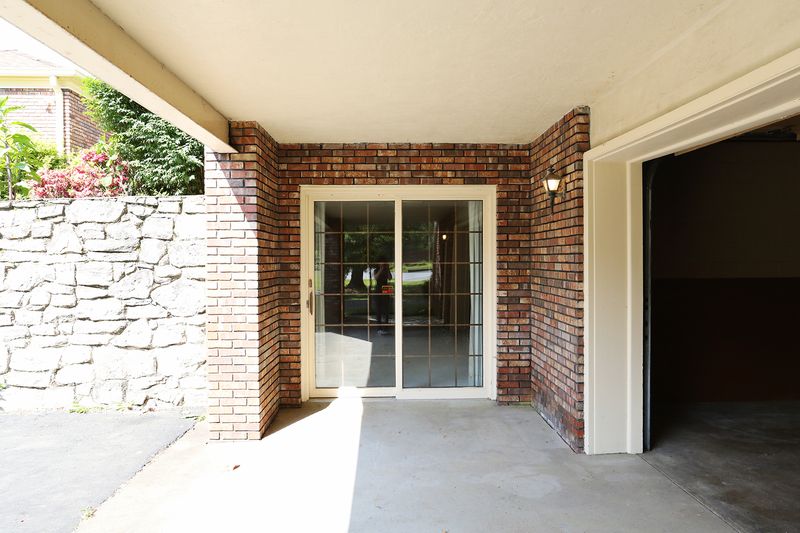 Here’s how it looked outside that door before. So, imagine that to the left there is going to be a giant window instead of an opening. We decided to make all the floors match so that it would feel more unified. And we decided to paint this brick white so it felt more indoors. (Eventually we want to paint the whole exterior of our home white, but that’s not a priority until the inside is COMPLETELY done.) We were REAL nervous about these choices. 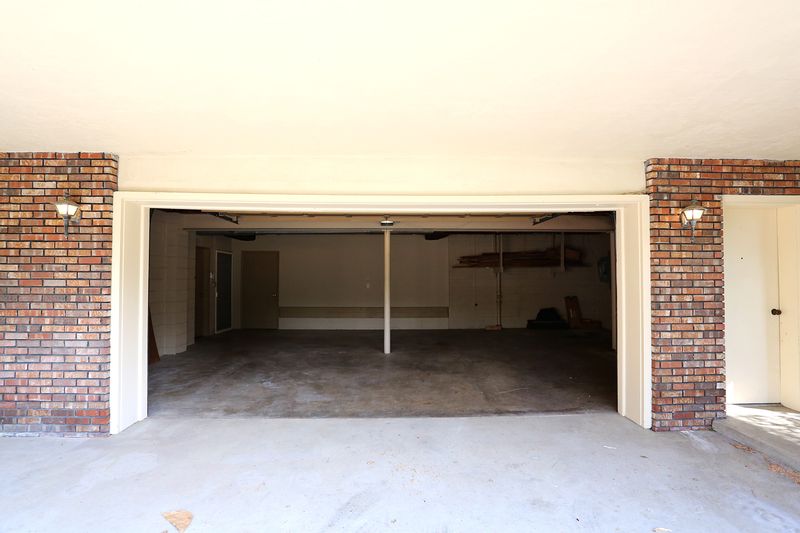 Here’s how it looked under the carport before. I was TERRIFIED about turning the garage into living space because I had a really hard time visualizing it. I was scared it would look like a weird garage forever (spoiler—it wasn’t THAT scary). To the right here you can see Jeremy’s outside entrance. The window would go right there where the lip of the platform is, so that his door was outside and the rest of this was indoors. 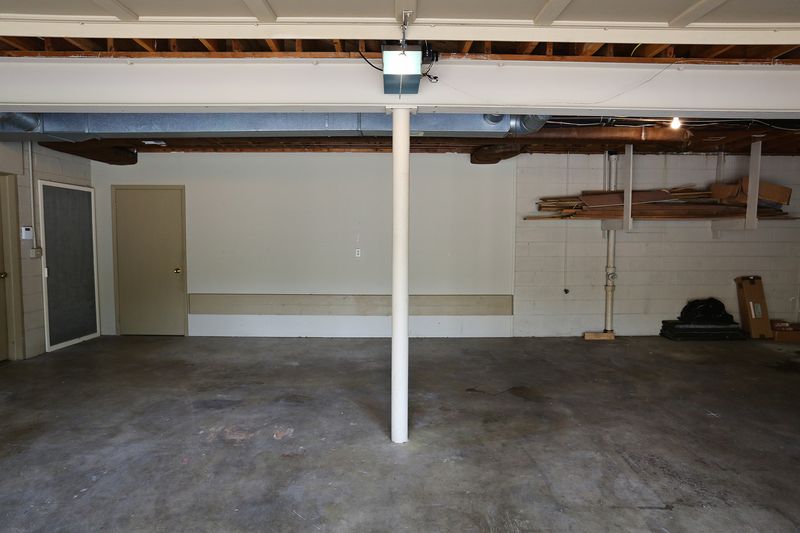 These photos were taken on closing day, which was the first time we really were able to see this space. Before that it was VERY full of boxes and storage. It’s a pretty large two car garage with a closet in the very back for more storage. 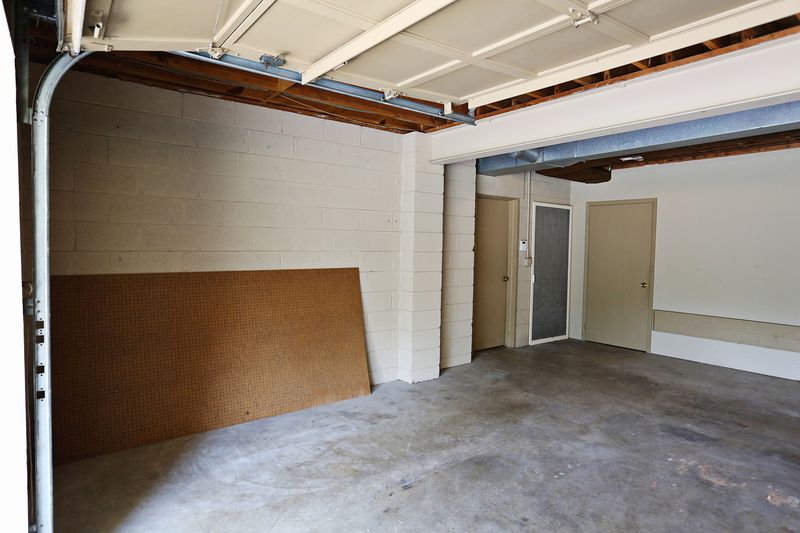 After the garage door was removed, we decided to spray the ceiling white. We were advised by multiple contractors to just drywall it up, but we wanted it to look more industrial, kind of like a cute coffee shop vibe. And I believed that if we were able to get it really white and then install really nice chandeliers, that it would work. It took two separate times of painting it white. The first time wasn’t nearly enough and there was a lot of yellow coming through. So we did it again with a ton of Kilz primer and that did the trick.

As for the walls, we decided to just paint it all white and get the floors put in before we decided if we wanted/needed to conceal the cinder blocks. 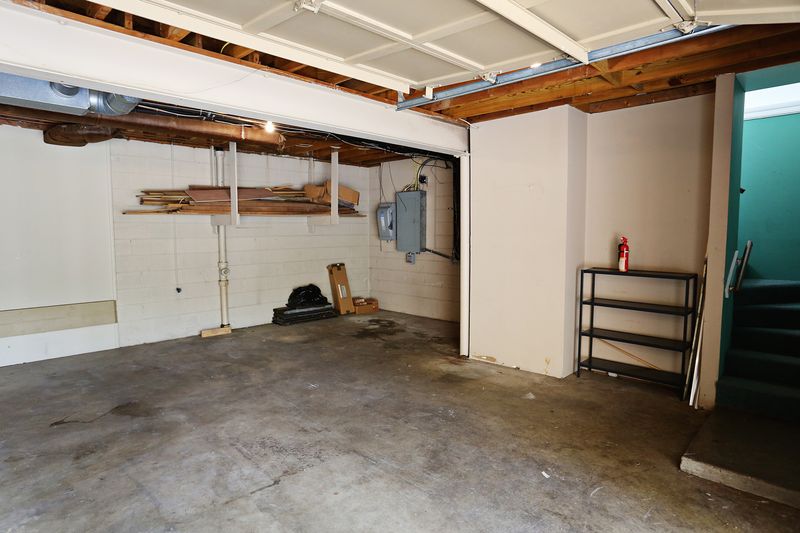 Here’s the other side. We decided to add a tiny half bathroom back there in the corner as well as a wet bar along the back wall. Where that shelf is we want to add some built in shelves for extra drum storage. 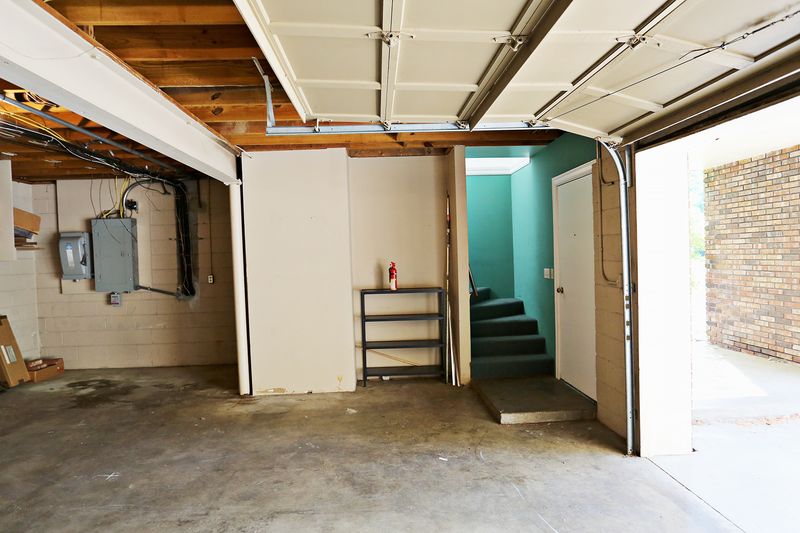 You can see here another stairway that leads up to our kitchen. 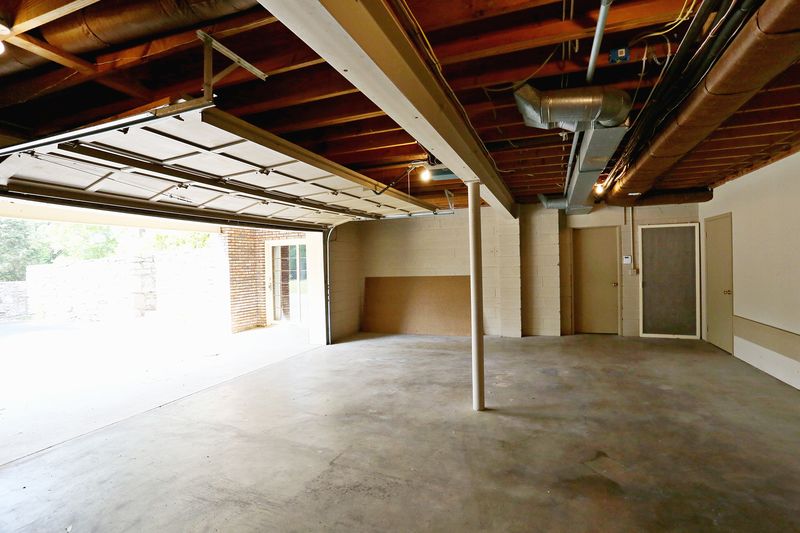 This part of the studio will have a sofa, chairs and a coffee bar. When bands come in (which isn’t all the time, but happens occasionally), it’s important to have a non-awkward space for them to hang out and play with their phones while just one person is recording their parts. It’s also a good meeting space and a comfortable spot for people to write lyrics.

One advantage we had is that after years of Jeremy doing this kind of work (in makeshift studios) we knew exactly what he needed and didn’t need for his space.

Alright! That’s it for now. Do you think we’re totally insane?? It’s OK if you do! We kind of felt insane in the beginning.

I can’t wait to show you an update on all the progress soon. xx- Elsie