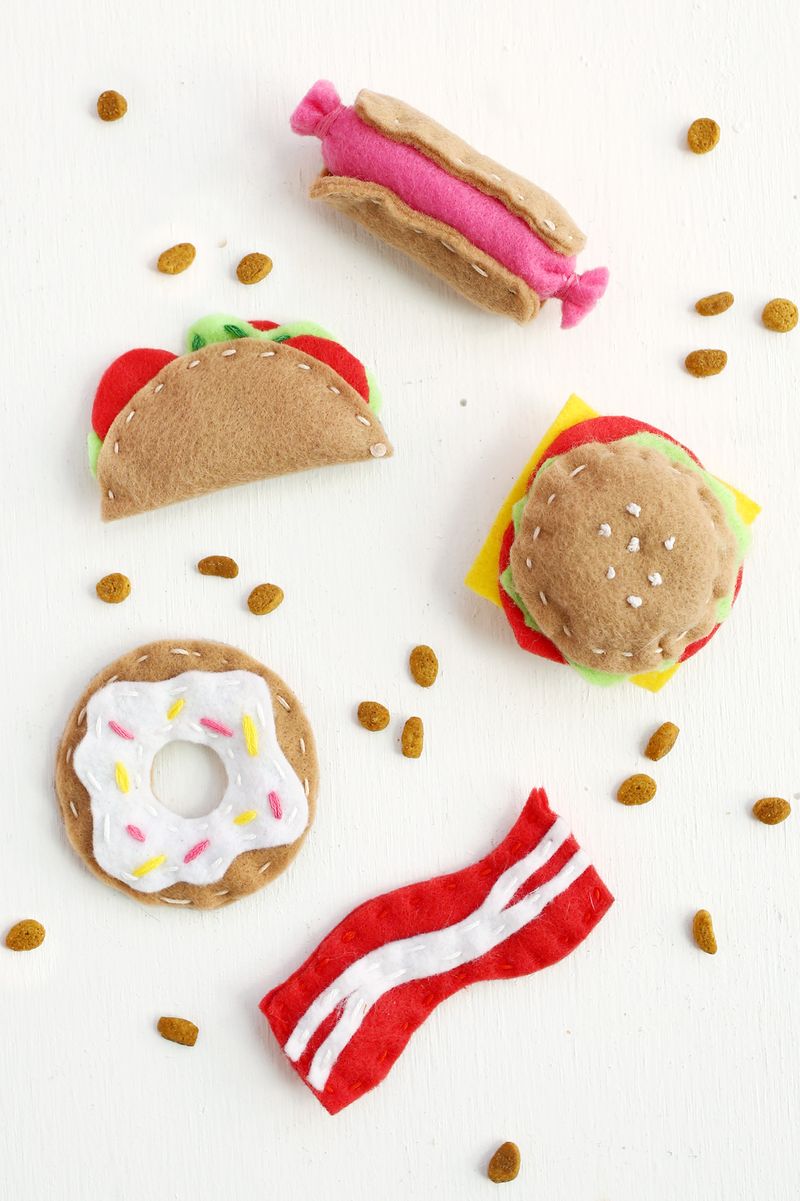 It is with no hesitation that I declare this to be my favorite project so far all year!! I know, I know, we are only a few weeks into 2015, so that doesn’t seem to be that high a distinction yet, but ask me again in December, and I bet this will still be up near the top of my list. Since the only children at our house so far wear tiny fur coats and sleep 23 hours a day (in other words, they are cats), I have a hard time not spoiling them with fun toys or treats I think they would like. Every time I pick up a new furry mouse toy at the store, my husband rolls his eyes and tells me they already have too many toys and they don’t need any more. And then I think, “But these years go so quickly! Pretty soon they will be off to college, then law school, get married, have kids of their own, and I’ll miss this precious time together!!” Then I remember they are cats and not interested in Ivy League universities, and I reluctantly put the toys back. Sometimes.

Anyway, I thought it would be fun to make the kitties’ toys myself for a change, but I was a little stuck on what to make. Mice are so last year (am I right or what?), but suddenly the image of a tiny cheeseburger popped into my head and I knew the answer—junk food toys! They are way easier to make than you would think, and since you can get sheets of felt for around $1 at a craft store, they are also pretty economical too. 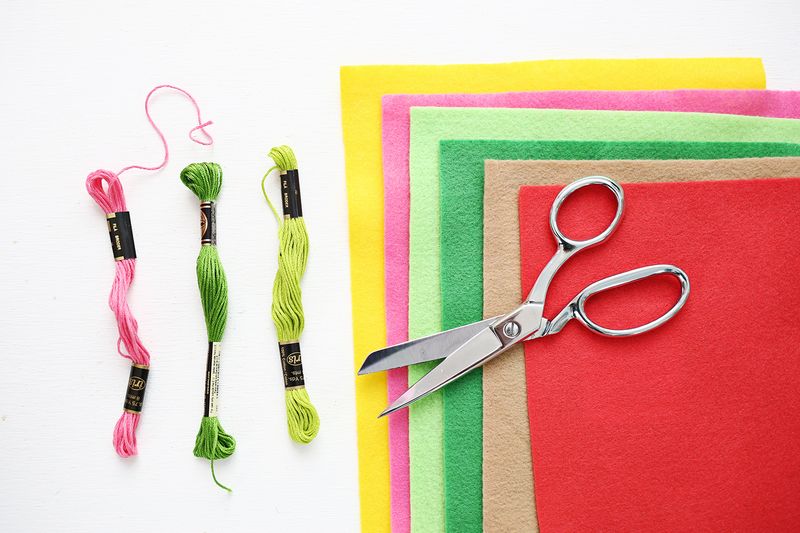 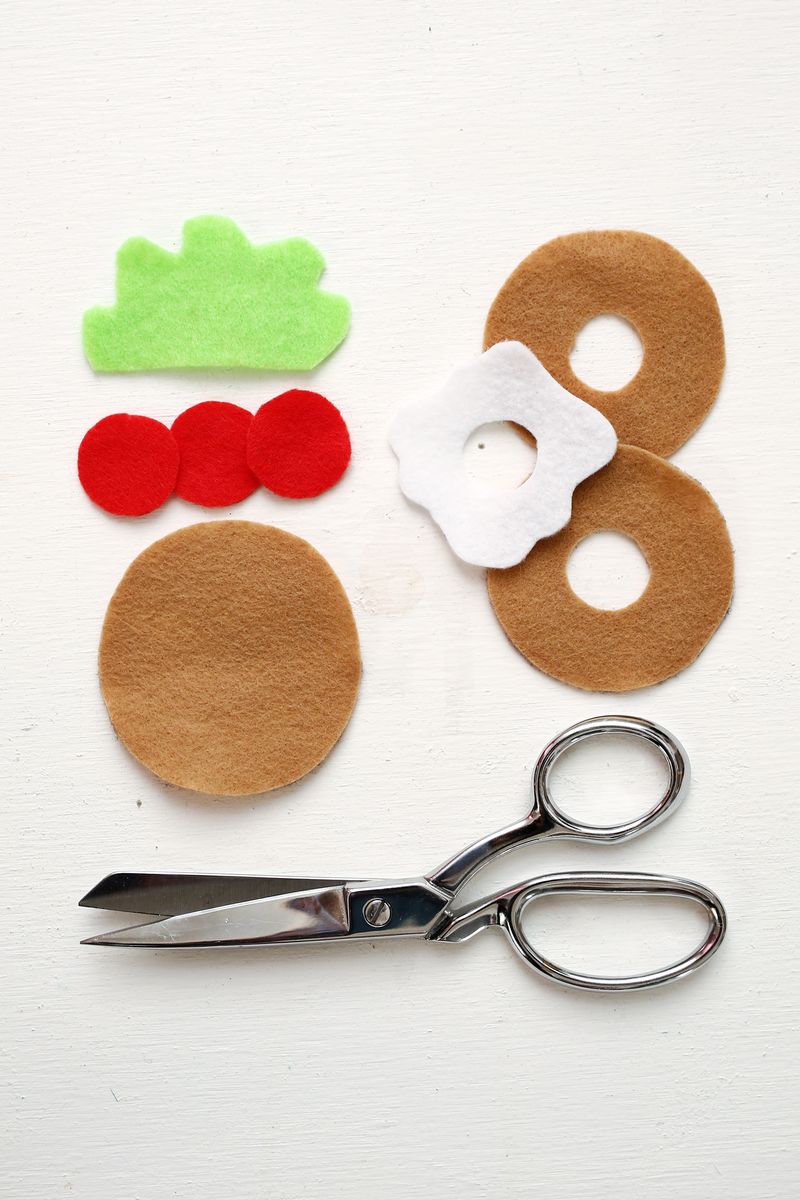 First, start by cutting your shapes of colored felt to represent each layer of your food item. You can see the different pieces I cut above for the taco and the donut toys. Since these food shapes are so simplified, you really don’t even need a pattern to make them. Just think of the food you want to make, and break everything down into the colored shapes that make up that food.

The only thing that was a little trickier was making the top and bottom hamburger “buns” so they would be fluffy and not just flat circles. For each bun, I cut two circles, but made one a little smaller than the other. I lined up the circular edges by making small pleats on the larger circle. That way, they both end up with the same circumference, but the larger circle has a “puffy” middle where you can stuff it with catnip. You could also use this shape to make ice cream cone scoops too. 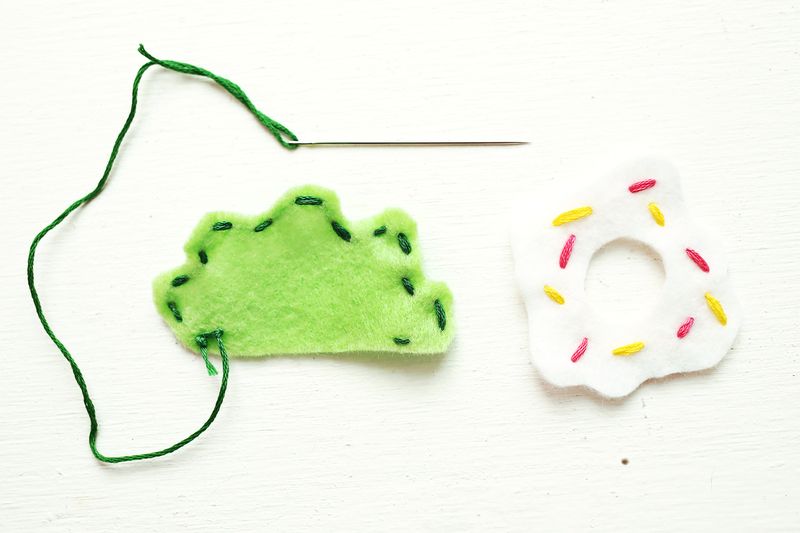 After your main shapes are cut, add any sewn details you’d like to add with a yarn needle and embroidery thread. For me, this included the sprinkles on my donut, a green detail on the lettuce leaf, and the sesame seeds on my cheeseburger bun. Once your details are added, sew down any felt pieces that go on top of your food (for instance the icing layer on top of the donut and the white fat strip on the bacon). 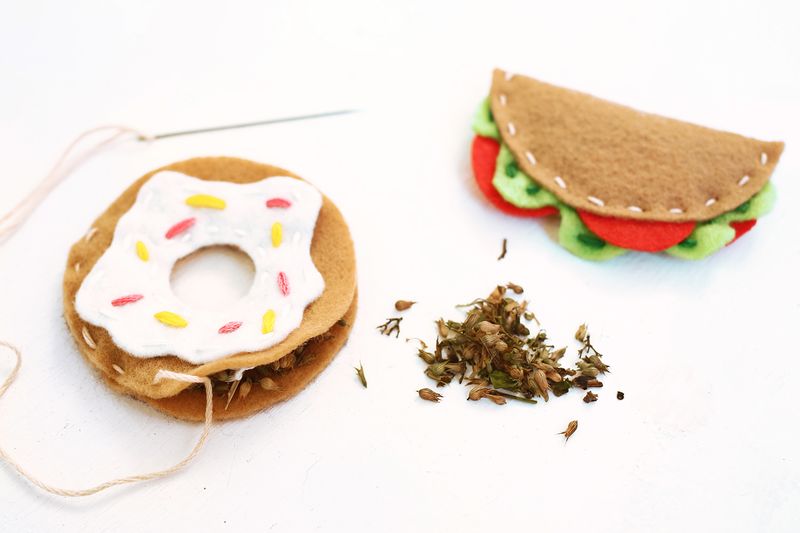 Put all your layers in order now and start to sew around the edges with a corresponding colored thread. When you get your toy about halfway closed, stuff in as much catnip as you can into the open cavity. Keep sewing and gently stuffing the catnip in until your toy is sewn shut. I recommend using catnip that isn’t ground up into fine pieces for this project so it won’t sneak out of the toy and onto your floors. 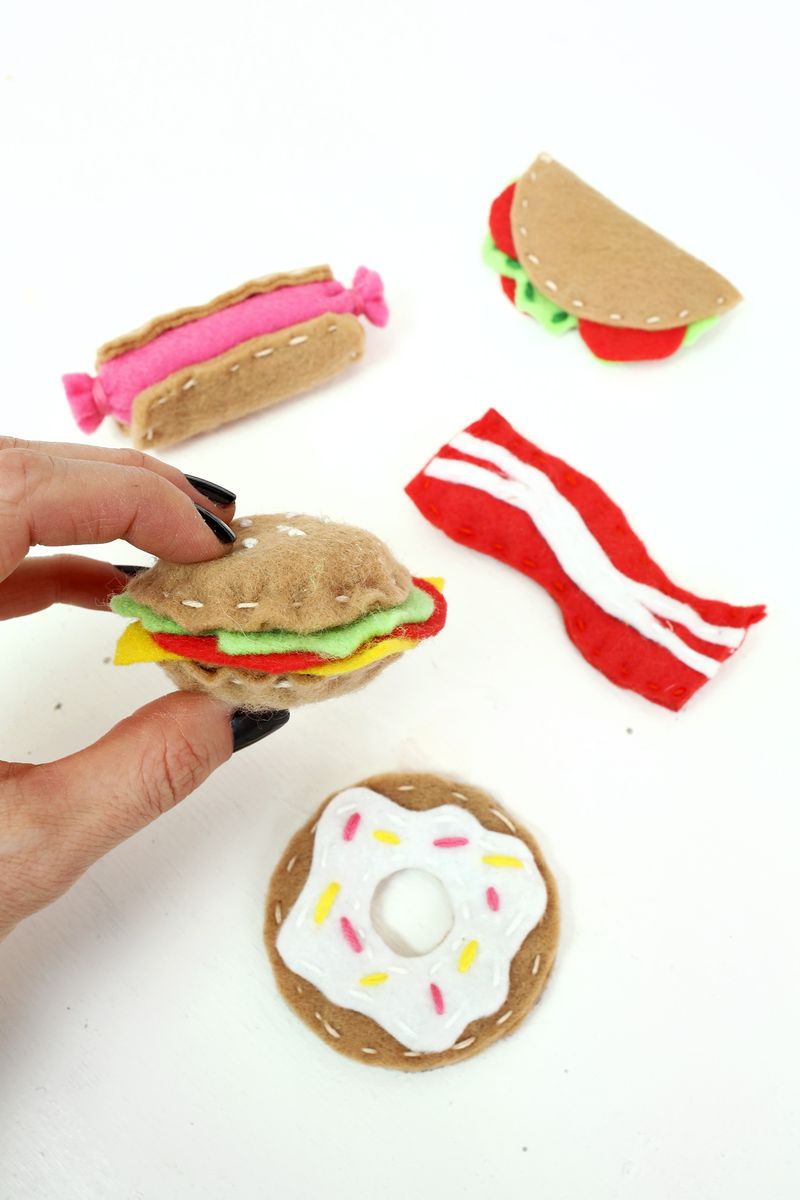 For the toys that aren’t flat (like the cheeseburger and hot dog), I put the catnip in the buns first and then sewed all the rest of their pieces to the catnip laden buns. Once your toys are securely sewn, it’s time to play! 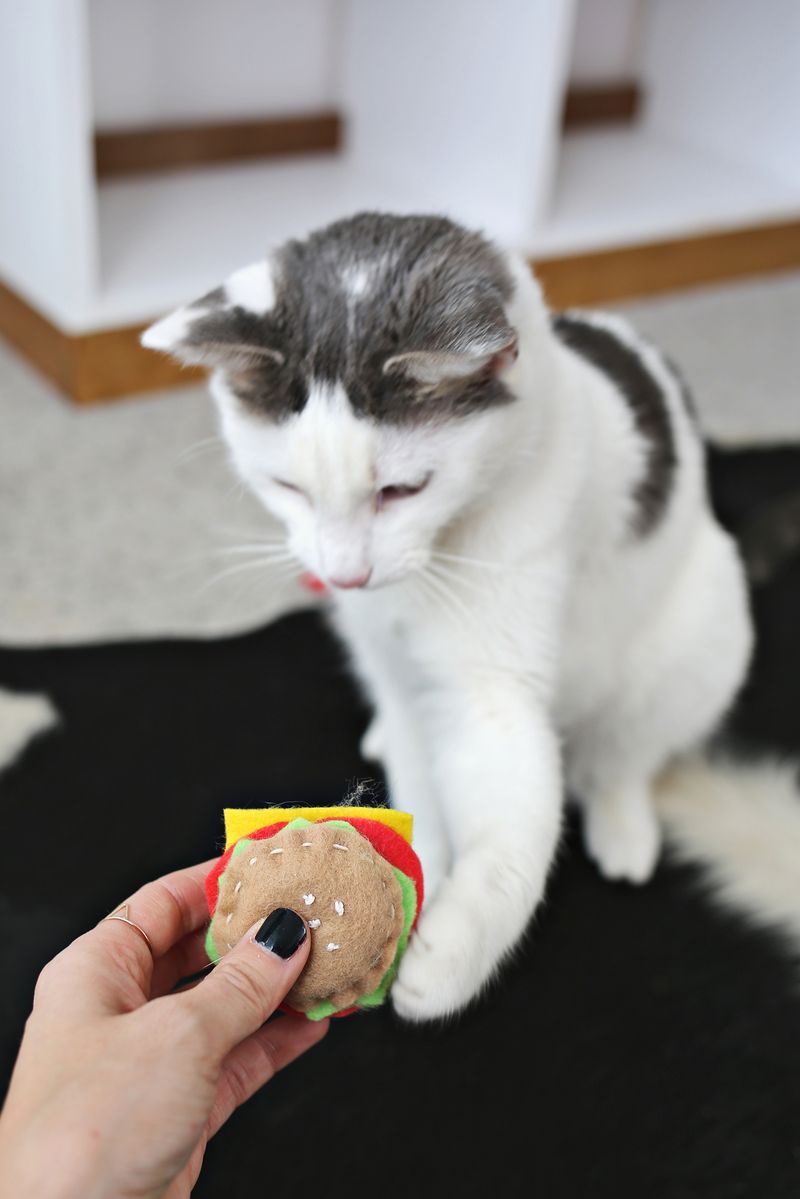 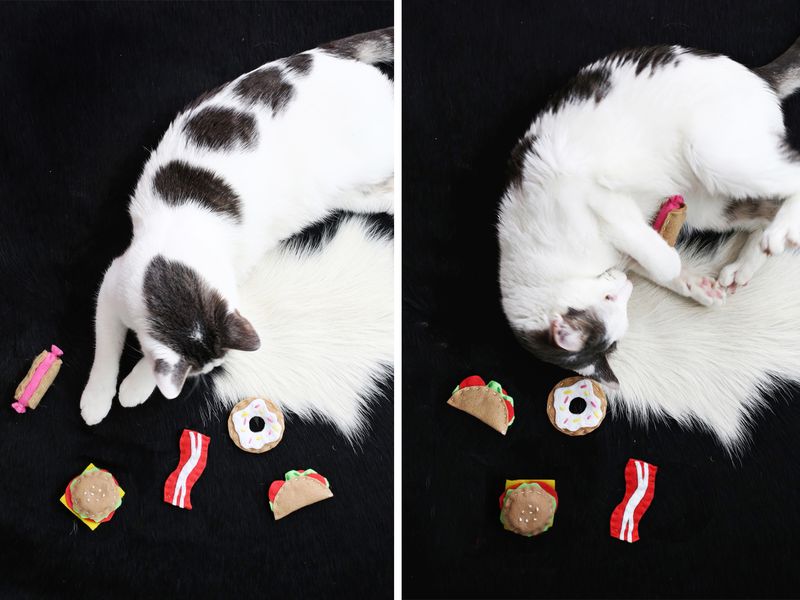 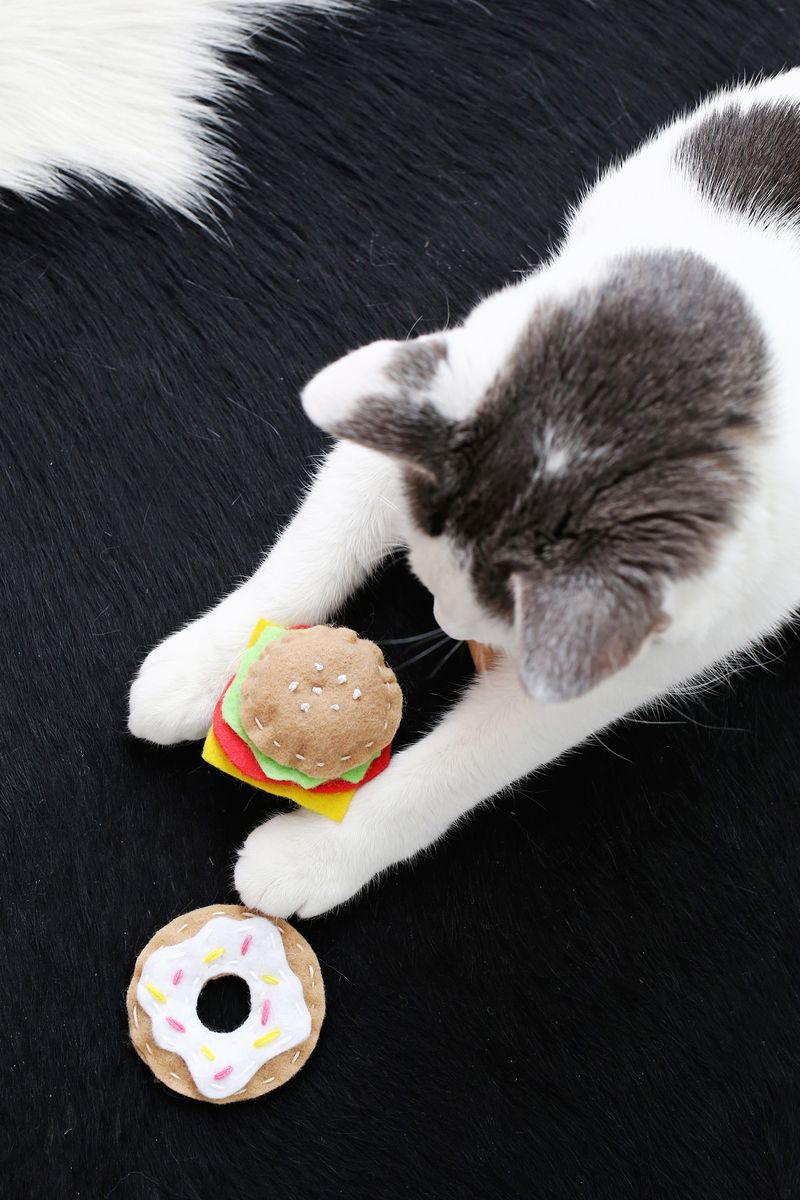 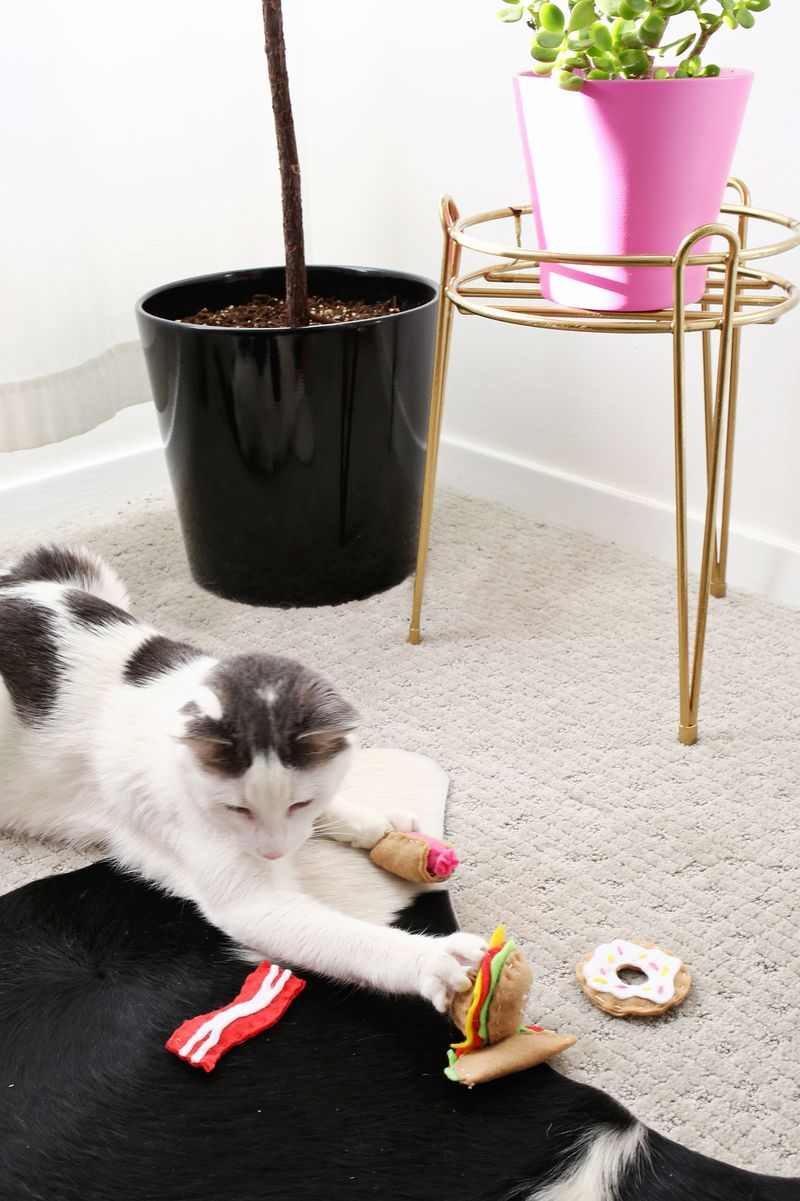 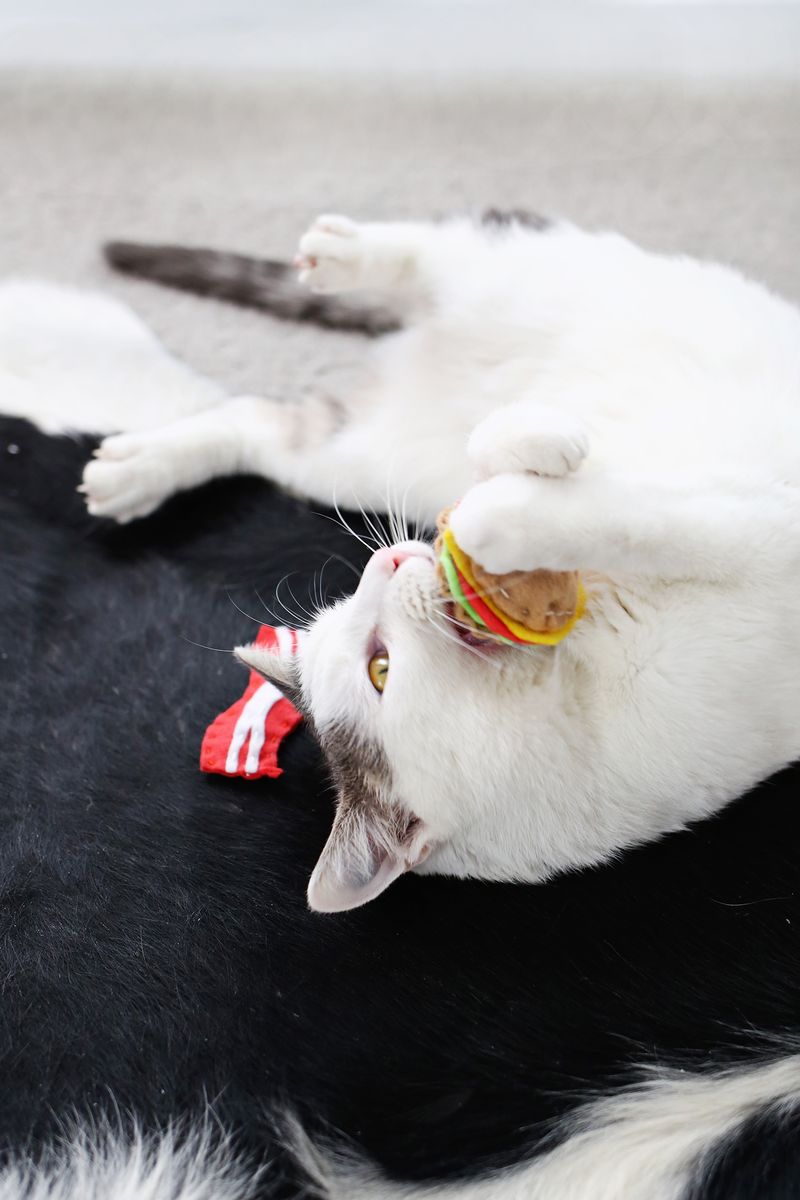 I can’t even tell you how much I love the sight of Mac eating that tiny cheeseburger. I brought the toys home from work in my purse, and it only took 60 seconds before Mac found the burger and started playing with it. He loves them. I like that the more 3D toys bounce around like a ball when he plays with them, and you could totally attach any of these to a string and a stick to create a hanging toy too. I have lots of other food ideas to make next: a pizza slice, ice cream cone, french fries, a soft pretzel…the list goes on and on.

As far as the durability of these toys go, I think they will certainly be around long enough to get quite a few good plays out of them, but you could also buy a more dense wool felt if you want them to last a little longer. All good toys come to an end eventually though, and I have a few furry mouse toys that have been taken down to the plastic skeletons to prove it! Do you think your kitties deserve a fast food treat? What foods would you make? xo. Laura

Omg this is so so cute!

Ahh! I wish my boyfriend’s dog didn’t eat every toy in sight because I would love to make these for my cat! Maybe I can make a cat-only zone somehow…

I love tiny fake food and I love my cat, so this is the perfect combo! Can’t wait to make some for him!

Hey! Love these, but I’m wondering what the back of yours look like, like from where you knot the thread? Mine look so ugly and I’m afraid there is a secret I don’t know!!

Those are adorable! I need to sew that for my cat, he would love them!

What a great idea, though I’m not sure how long they’d last with my little monster…!

Super cute! This makes me really miss my kitties! And good call on using felt–when I had felt around for needle felting, my kitties ALWAYS tried to get at it to play!

These are adorable, what a fantastic idea. I will absolutely be making some. One thing I would add though: a little piece of cellophane inside each one along with the catnip so that they make crinkly sounds. Thanks for the inspiration!!

These are fabulous! So adorable!

Anyone have any thoughts on how one might convert these to be good for a dog?

SO cute. i definitely have to make this for my cats.
xo, cheyenne

This is my favorite DIY you’ve ever posted. What I love about your DIY posts is that they’re always lovely and always so diverse. I loved this one especially because it was such a cute surprise!

What a fun idea! Your cat looks adorable playing with them. 🙂

That is so cute and it looks like it’s really fun and easy to do, even for me that never sewed in my life! I will definitely gonna try this DIY.

This is so cute!

This is such a sweet post, what a great idea, I need to make one for my kitty now, she loves a good catnip toy! Thank you.

Oh, my cat will love this!

I love this project! Must make some for my kitty! 😀

Oh my goodness – these are amazing! I love how they look in little paws xo