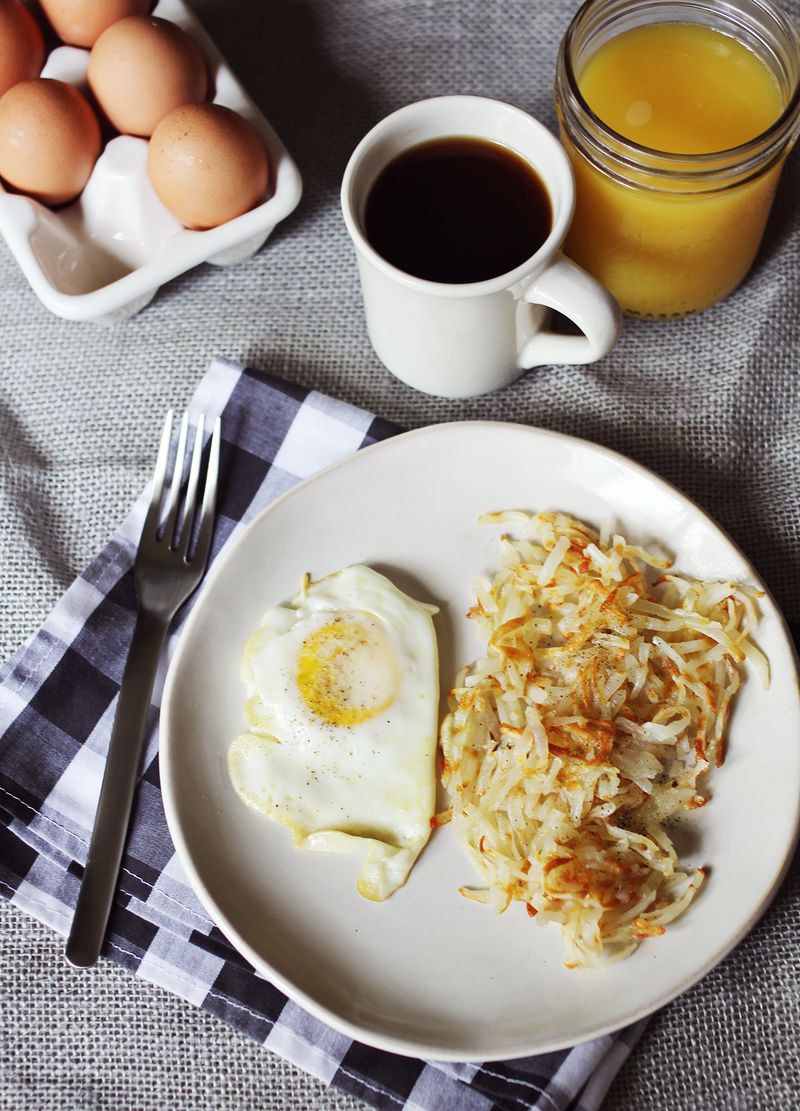 Recently I saw a fun idea on Pinterest involving hash browns and waffle irons. I'm a MAJOR hash brown fan. It's probably one of my favorite foods in the whole world. If I go out for breakfast and hash browns aren't on the menu, I feel a little let down. I guess it's the country girl in me. (Actually, I don't really know if hash browns are considered "country food" by most people. What do you think?) 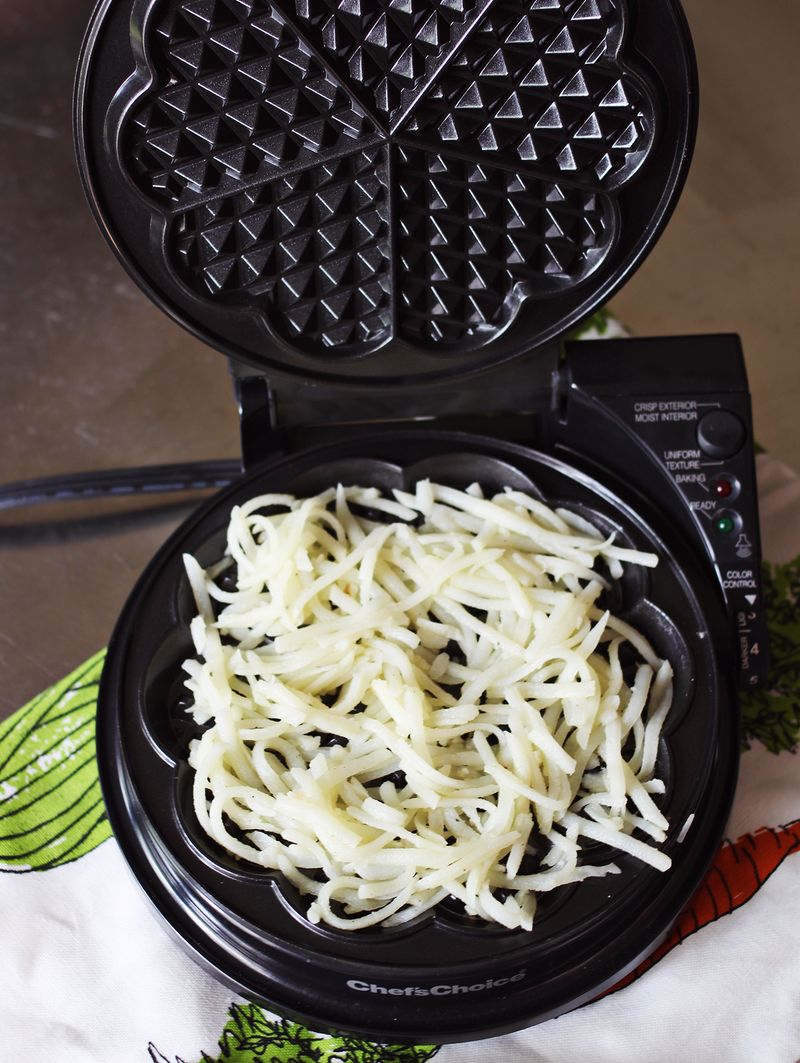 Because of my deep love for hash browns, I was excited to give this a try. I saw quite a few different people sharing their tips and tricks, and I wanted to see what worked best for me. Here are my results: 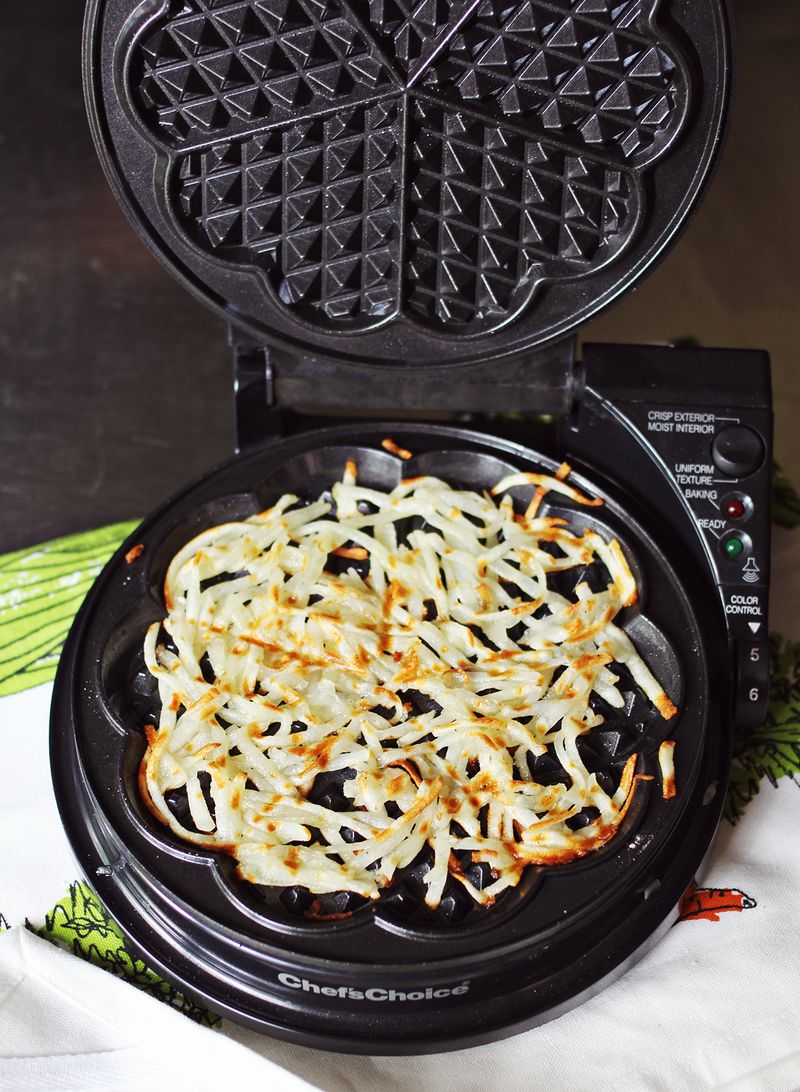 I used this waffle iron

. I set it on 5, which is one of the hottest settings. I used store-bought hash browns (fresh, not frozen). First I put the uncooked hash browns in a mixing bowl and added a few tablespoons of oil. Just enough that every piece got coated but wasn't dripping with excess oil. I then seasoned them with a little salt and pepper. Then I cooked them in the hot waffle iron for twice as long as I would waffles (mine has a timer that goes off, so I just doubled that time). You can check them as they cook, so they can get as crispy as you prefer. We found that a thicker layer of hash browns (than what is pictured above) worked best, but don't overdo it or else the inside can get too mushy. 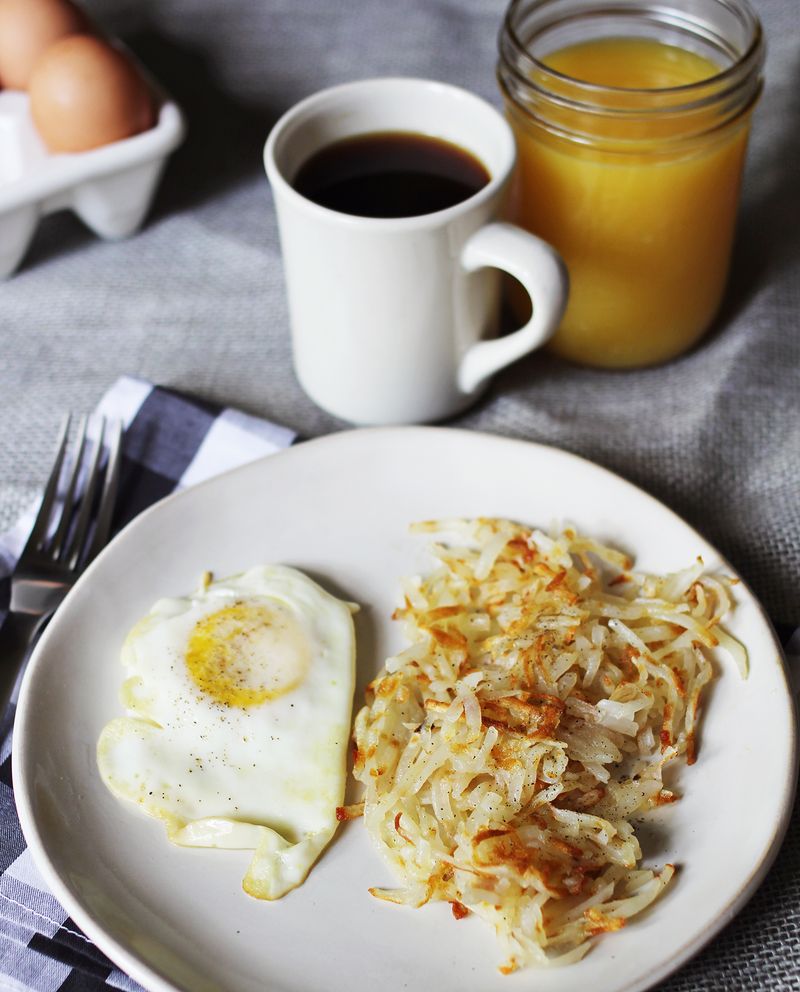 I'm really glad I stumbled across this idea and tried it out. I love how easy it is and how it can free you up to focus on cooking your eggs instead of watching to pans. If you like hash browns, give this a try and let us know what you think. xo. Emma

Yummy, love hash browns with ketchup. I don’t own a waffle iron but I wonder if this would work on a Forman grill, will have to try. Thanks!

Yum! I absolutely love hashbrowns, but hate pan frying them. Thanks for the idea!

I’m exactly the same way with hash browns! If they’re not on a breakfast menu, it’s a big fat fail. Also, if I order hash browns and they’re more like home fries…SO SAD. Not that I have anything against home fries. All fried potato products are pretty much the coolest. There’s just something about hash browns…

Emma thank you for the hashbrown-waffle post. Tried it this morning, worked GREAT. Always look forward to the recipe posts. Need to try out one of your drink recipes soon.

Made them, just grated some peeled potatoes and added oil, pepper and salt. Delicious! Thanks!!

I just had to google what “hash browns” are… I’m from Germany, so I didn’t know! But now I have to say “Great Idea”…:)

By the way… hash browns are “Reibekuchen” or “Kartoffelpuffer” or “Kartoffelpfannkuchen” in german or even worse “Reibedatschi” in our accent… Sounds funny, doesn’t it? 😀

Looks good! Might give this a go myself, I love hash browns! x
Amy | http://amysbeautyjournal.blogspot.co.uk/

This is such a good idea! Will definitely be trying this soon!

OMG what a creative idea! I love hash browns. When I was little we went to visit relatives in Wisconsin during the summer. They made a country breakfast every morning, including hash browns. This is on my “to do” list this weekend. Thanks!

ah, yum! this kind of looks like rosti, that they have in Germany – basically a whole plate (like pizza) of fried grated potato, served with different toppings 🙂

I saw that on pinterest last year, too! It’s now my favorite way to make hash browns. I even make them as a dinner side dish sometimes, mixing in garlic and onion (grated). It’s really yummy!

fab idea. i HATE when the hash browns aren’t as cooked in the middle as they are on the outside. problem solved.

My husband will be so excited. This is one of his favorite sides. Now I guess I have a reason to replace our waffle-maker. Thanks for sharing!

I can’t wait to try this. My husband loves hash browns, but I hate frying ANYthing. This looks like a great alternative.

Looks so good!!! Will have to try this 🙂

Great idea! My husband has been wanting a waffle maker so this is another great reason to purchase one!