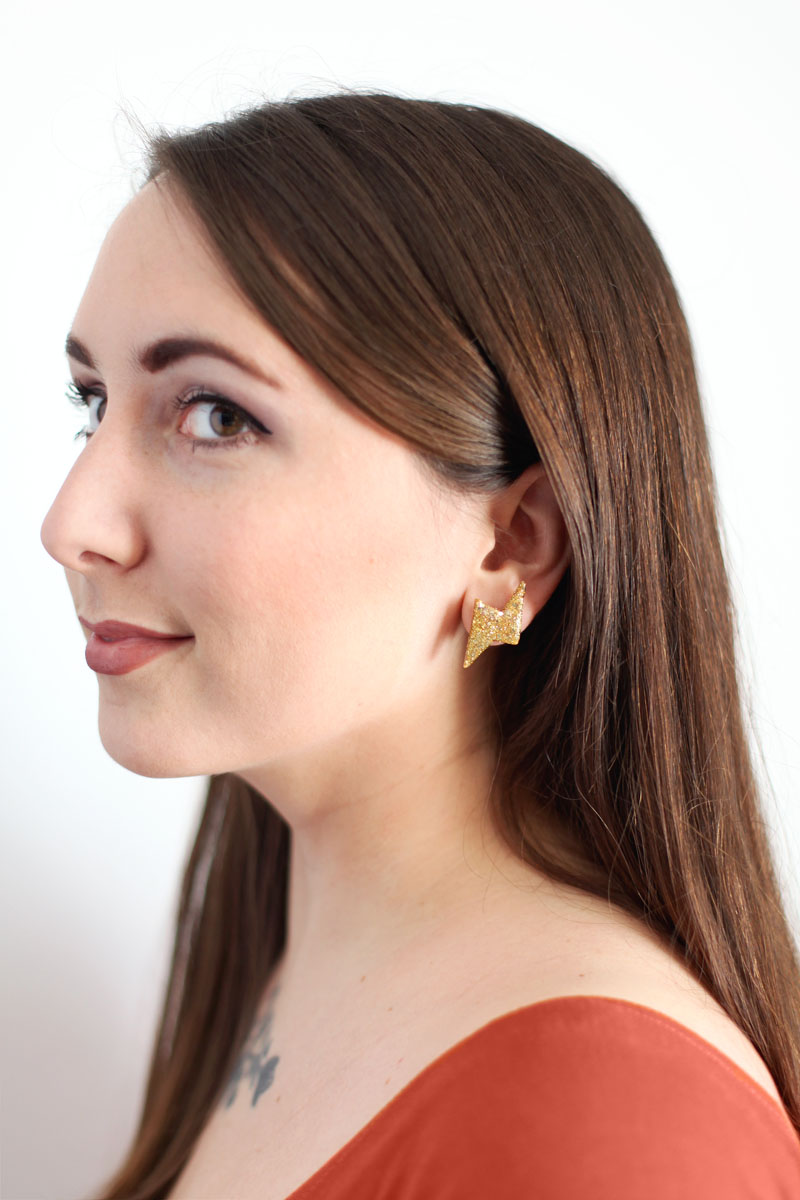 Most of us grown-up girls fondly remember the Easy Bake Oven–whether we had one ourselves or coveted a friend’s. But me? I have the best memories of the Easy To Do Oven. I even still get the commercial jingle stuck in my head! “I love what I can do, with Easy To Do, Easy to Do-ooo!” Please tell me another early ’90s child remembers this.

Anyway, The Easy To Do Oven came with clay and tools to make your own jewelry and beads, which was basically a crafty kiddo’s dream come true. If I recall, the oven didn’t work too well, so we ended up baking my creations in our kitchen’s conventional oven, but man, that kit lasted me through many a Mother’s Day and Christmas gift season.

I recently became interested again in making my own jewelry, especially since as a barista at Starbucks it seemed my only freedom of self expression was in decorating my earlobes. These earrings struck my eye one day while scrolling through Pinterest, so I thought I’d make a version that was a little more my style–bold and gold. I had most of the supplies on hand and just needed to run to the store for some Sculpey clay. It was so easy to do, I was singing that ’90s commercial jingle in my head the whole time I worked on them. Which thankfully wasn’t that long. 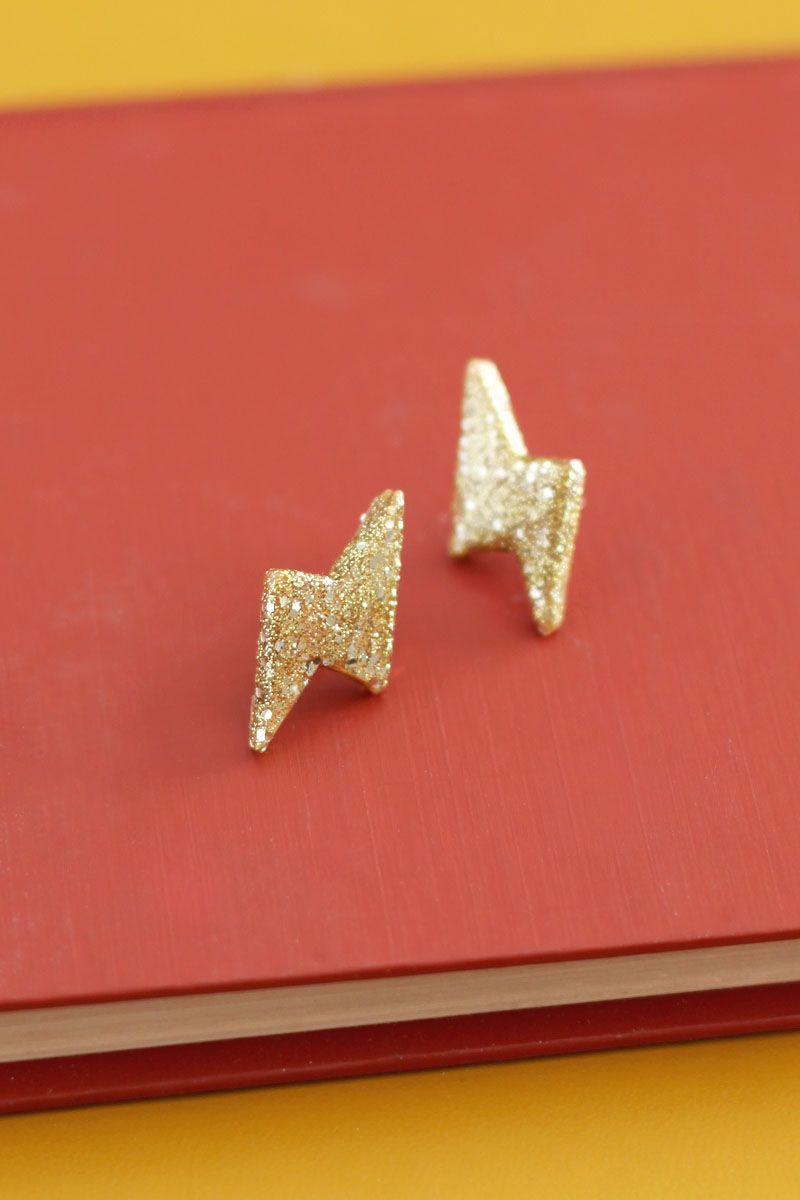 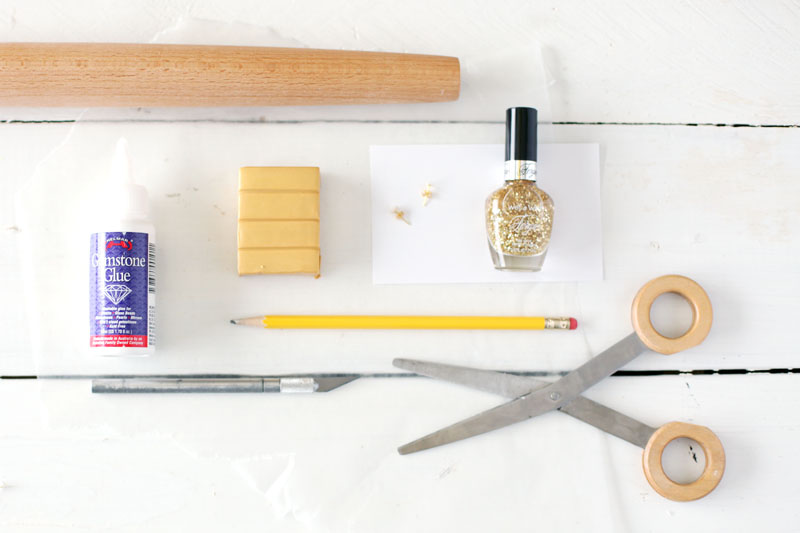 Total Cost: $1.65 (approximately broken down according to the portion of supplies purchased) 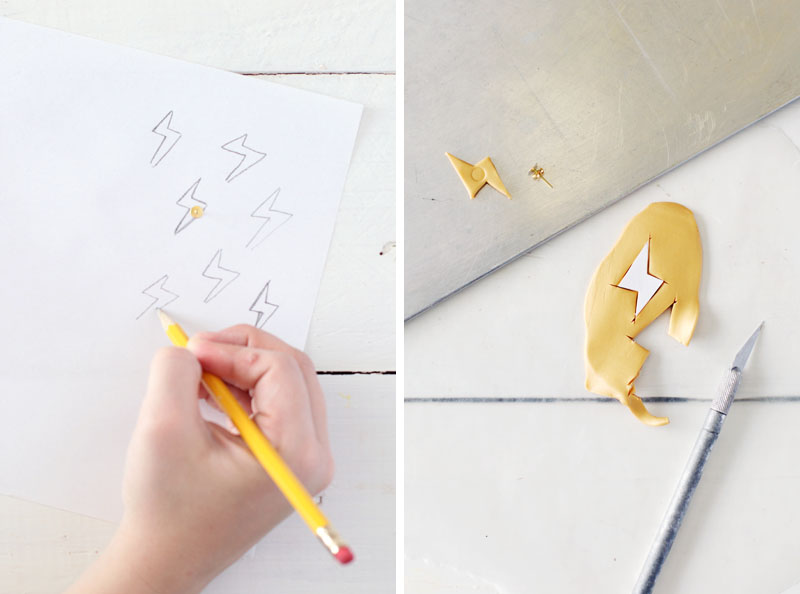 Step One: Practice drawing thunderbolts, keeping in mind how large the widest point must be in order to affix your earring post. I kept my earring post standing by so I could check to make sure my thunderbolt was drawn large enough. Then cut out your favorite thunderbolt to use as a template.

Step Two: Roll out your Sculpey on wax paper to be about 1/8″ thick. Lay the thunderbolt template over the top of the Sculpey and cut around it with a craft blade. Then pull up the template and cut out another one. Be careful not to extend the blade too deeply into the corners or a cross hatch will be visible. Although, honestly, if you did leave a cross hatch it might end up being completely covered up by the polish later.

Step Three: Pick up the two thunderbolts you just cut out, and gently use your fingers to fix any misshaping that may have occurred when pulling away the scrap clay. Then lay the thunderbolts to be mirror images onto a baking sheet. Press the earring posts onto the middle of the thunderbolts, leaving just a slight indent, and then set aside the earring posts. Bake the clay thunderbolts at 275 degrees for 30 minutes. When they’re finished baking, allow them to completely cool before handling. They will set up to be hard, but not brittle like traditional clay. 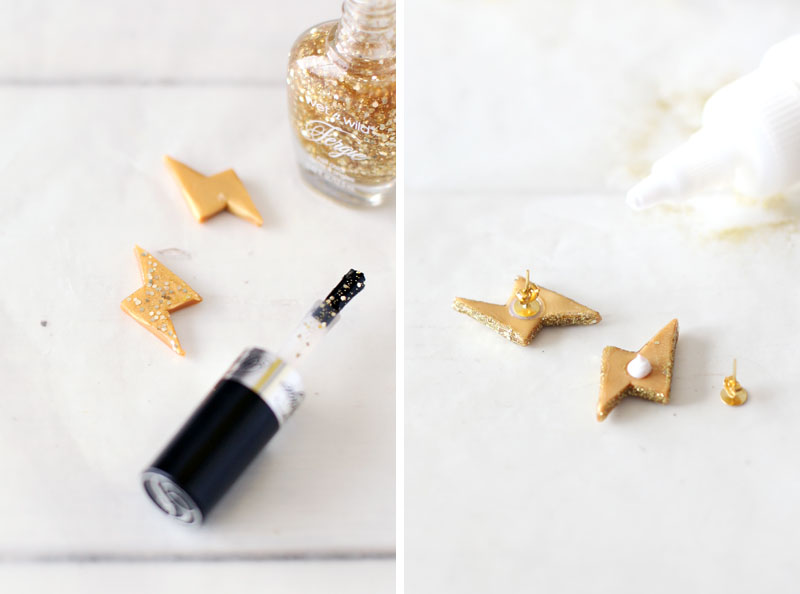 Step Four: Paint around the edges and top of the thunderbolts (not the side with the earring post indent) with the glitter nail polish. While the first coat was still wet, I sprinkled some loose, fine gold glitter on it. You may need to do half of the earring at a time so you can handle the part that doesn’t have wet polish on it. After the glitter and polish dried, I did one more coat of nail polish to seal in the glitter.

Step Five: Place a dab of permanent, waterproof glue onto the post indents you made on the back of the earrings, and gently press the earring post into place, being careful not to let too much glue seep out around it. You can see in the above right image the glue that has begun to dry and the glue that was just dabbed onto the earring back. Allow the glue to set up for 24 hours before fiddling with the earrings. 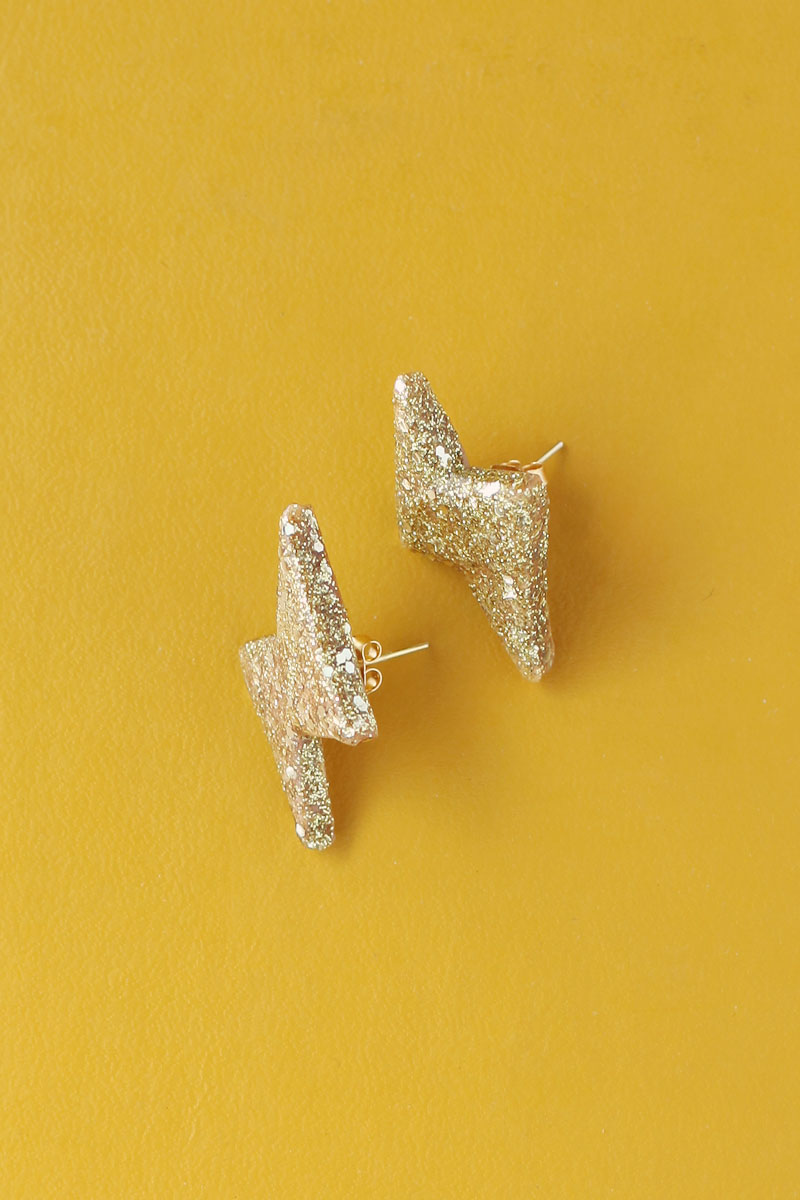 I was honestly surprised by how much I loved this project! I thought it would be fun to do and figured the thunderbolt earrings would be cute, but I didn’t expect to completely fall in love with the earrings like I did. Just try to get them out of my ears, I dare ya! Actually… don’t do that. That might hurt.

Thanks for the tip! I had no idea. Now I’m going to check in on these guys every now and then in expectation of a gooey mess! Ha! So far, so good, though. They seem perfectly fine, though that’s not to say in a few years they won’t have deteriorated in any way.

Love these! They’re so pretty!!

Wow, Casey! What a wonderful compliment to read! I care a lot about expressing myself through written (or typed?) words, so I’m just so encouraged by your compliment. Thank you!

These are so fun! I love that you used nail polish to make them extra sparkly.

How creative! I love these so much! I am definitely trying some clay projects soon.

I love this! Not only for making thunderbolt earrings, but earrings of all type. Maybe if I could make earrings I like I would actually start wearing them again!

Absolutely beautiful! I love earrings like this, though rarely have the time to make stuff like it, so scour the net for people who make it so I can just buy them!

Who knew it could be so easy 🙂

So cute! Do you have any more tutorials for making clay earrings or jewelry?

FYI that nail polish might eventually break down the plasticizers in the polymer… those earrings might turn into a gooey mess over time. Better to bake the clay and then glaze with fine gold glitter mixed into sculpey gloss glaze or some Triple Thick. I suppose at this price, though, you could just make new ones if they get gross!

They look great! I’m so trying this sometime!

I never actually heard of this clay (since I’m from Germany), but I know something similar to that so I’ll definitely try to make these!

These are very cute! The nail polish glitter is such a good idea, I’m thinking, stars, hearts, and little diamonds too!

Haha, these are soooo cute! You are all so talented and creative over here 😛

Going to try these this weekend and see if I can do them on some stainless steel tunnels for my ears! It’s hard to find cute and fun gauges that are still appropriate for work and these will be perfect! Going to try some hearts and stars too! 🙂

These are so cool! I actually like them a lot better than your inspiration! Off to the craft store… 🙂

What a cute idea! Also, Mandi is one of the best writers ever. Seriously, that woman has a way with words. Maybe not this article. I’m going to honest. I usually skim crafts, so I didn’t read much. But anytime I actually do sit down and read anything she writes she blows me away with her wording alone and I’ve been wanting to say that so I hope she reads this.

These are totally cute! I love how creative you are and that they remind me of Harry Potter! 🙂 EEEEE! 🙂