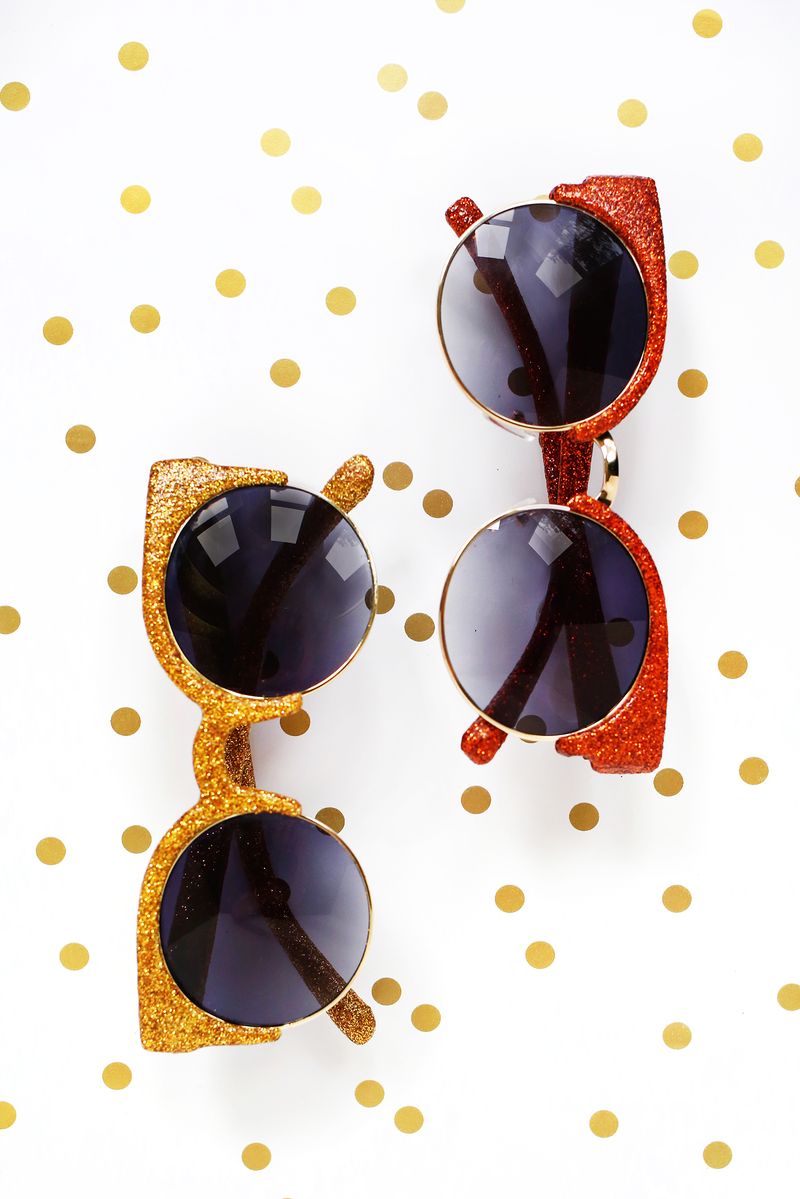 I love this part of spring when you start to switch your brain into warmer styles and fashion—sundresses, shorts, sandals, and of course, sunglasses! While I don’t quite have the manufacturing technique down to make my own pair of sunnies from scratch, I thought it would be fun to team up with our wonderful friends at Jo-Ann Fabric and Craft Stores to take an existing pair and give them a glam summer makeover by encrusting them in glitter. It was easier than I thought it would be to create the look, and I love the shimmery results! 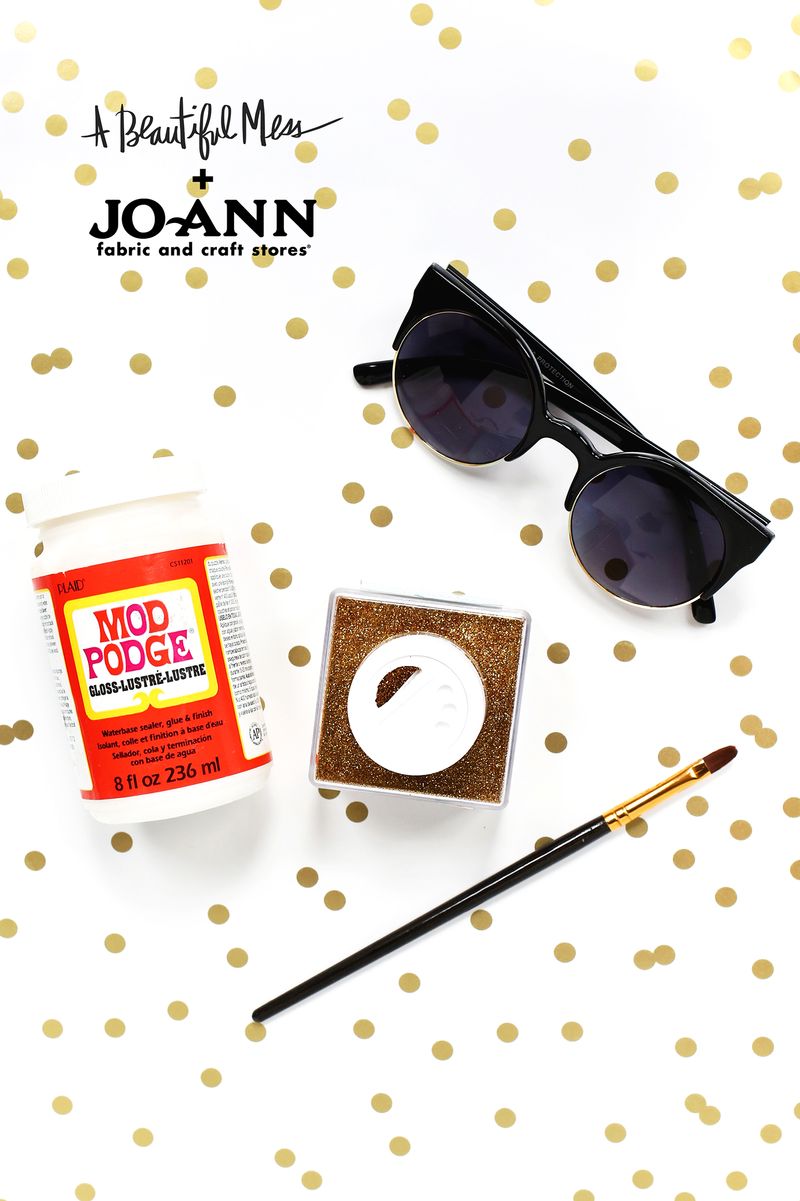 *NOTE: You could also try this with sunglasses that don’t have removable lenses and use painter’s tape to protect the lenses instead, but I found that after several coats of the glitter and glues, it was really difficult to remove the tape with a clean line result. So, try it if you like, but I think the removable lens route gives the finished product a much cleaner look. 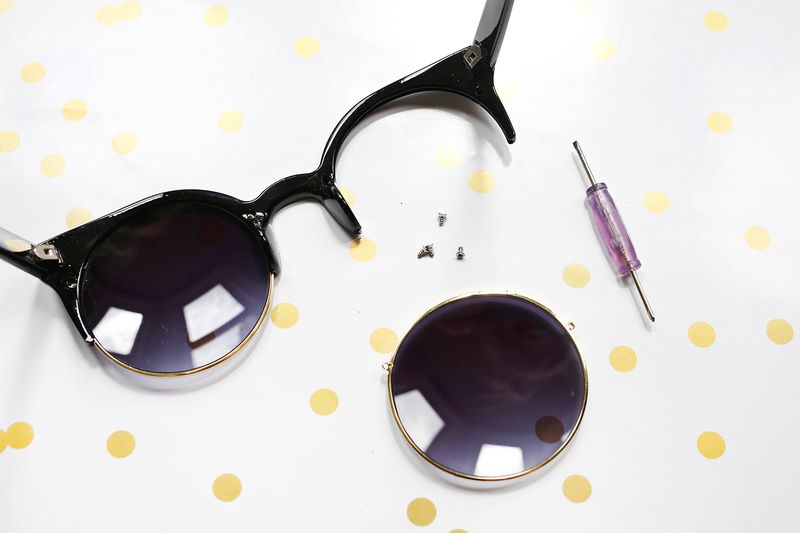 First you’ll want to remove your lenses from the frames. You can tell if sunglasses have removable lenses or not if there are little screws on the inside of the glasses that are holding the lenses in place. Use an eyeglass screwdriver to remove the screws and the lenses. Don’t worry about saving the screws. The glitter and glues cover over the tiny holes, so it’s actually easier to just glue the lenses back into the slots when you’re done.

If you bought sunnies with a matte material for the frames (not shiny or a bit textured or rough feeling), then you won’t need to use the fine sandpaper. But if your frames are a really slick or glossy plastic, I would suggest a quick run over the frame with the sandpaper to give the Mod Podge a better surface to stick to (just make sure to wipe off any sanding dust when done). 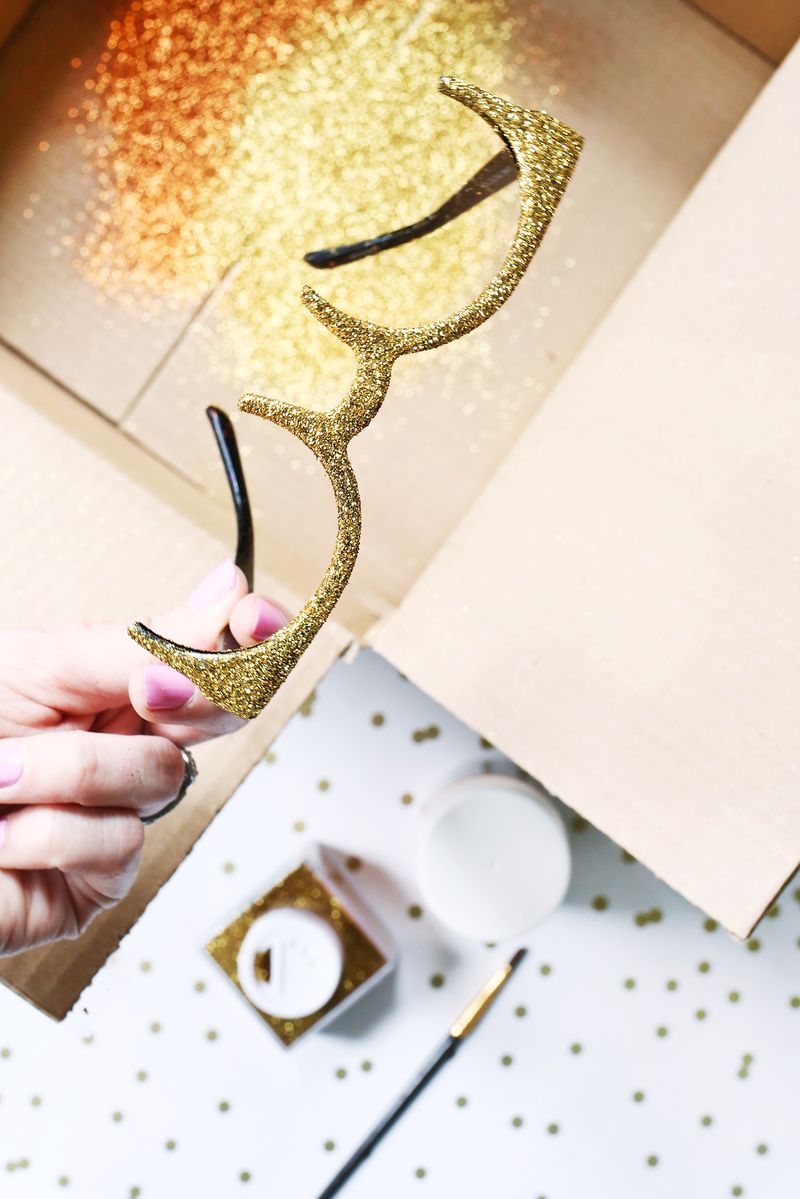 Take your lensless frames and use a brush to cover the middle, front, and back with a thin even coat of Mod Podge. Don’t worry about the sides yet, we’ll get to those later. Quickly pour fine glitter over the glue until it’s evenly covered. You’ll want to work fast on this step because the glue needs to be as wet as possible so that the maximum amount of glitter will stick. Shake off the excess glitter and allow the Mod Podge to dry. I would suggest pouring the glitter over a box or other container so you can save the glitter if you like, or at least keep it from going all over your house. Fine, loose glitter can haunt your house forever if you don’t keep it contained.

Once the glue is dry, repeat the steps with a second coat of Mod Podge and glitter and allow that coat to fully dry as well. 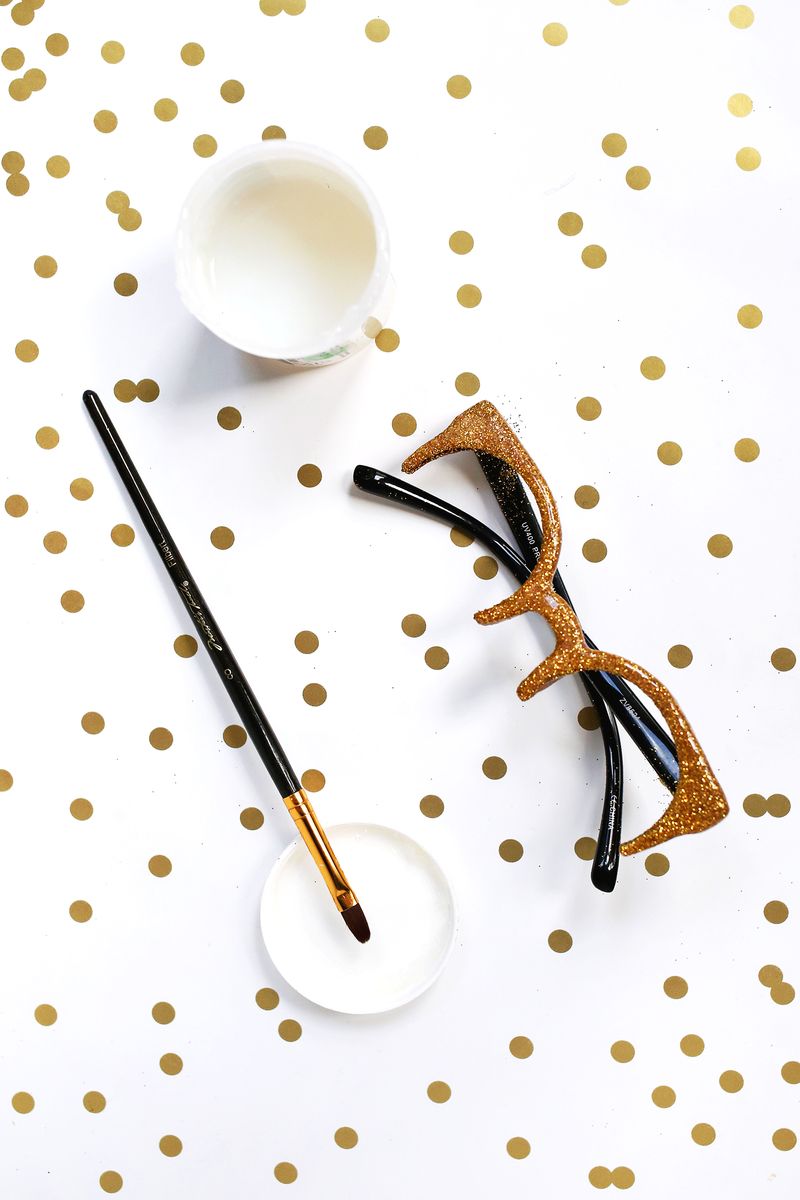 When the Mod Podge has set, use a brush to add a coat of Triple Thick Glaze. The glaze will seal in the glitter so you don’t end up with fine glitter specks in your hair for weeks, and it will also help even out the surface a bit so it doesn’t feel as rough against your skin. Allow the glaze to fully dry for 24 hours. Then repeat the process of glittering and glazing the two side ear pieces the next day. Allow the sides to dry for another 24 hours once you glaze them before adding the frames back in.

The reason for doing the sunnies in two parts is so that you always have the other part of the sunglasses to hold on to while you are painting the glue or sprinkling glitter on the other half. And trust me on letting the glaze cure for 24 hours before handling the frames. You’ll end up with smudged glitter if you don’t.

Once your glaze has cured, use a precision tip super glue to put some glue into the eyeglasses slot where the lenses fit in (don’t go overboard or the glue will overflow out onto your lenses). Before you glue them in permanently though, do a test run without the glue to make sure they still fit properly after all those layers have been applied. If your lens channel got a little clogged with glue or glitter, use a small tip like an X-Acto knife or the flat-head end of your eyeglasses screwdriver to scrape out the channel until they fit again. Once your glue has set, you’re ready to share your new and improved sunnies with the world! 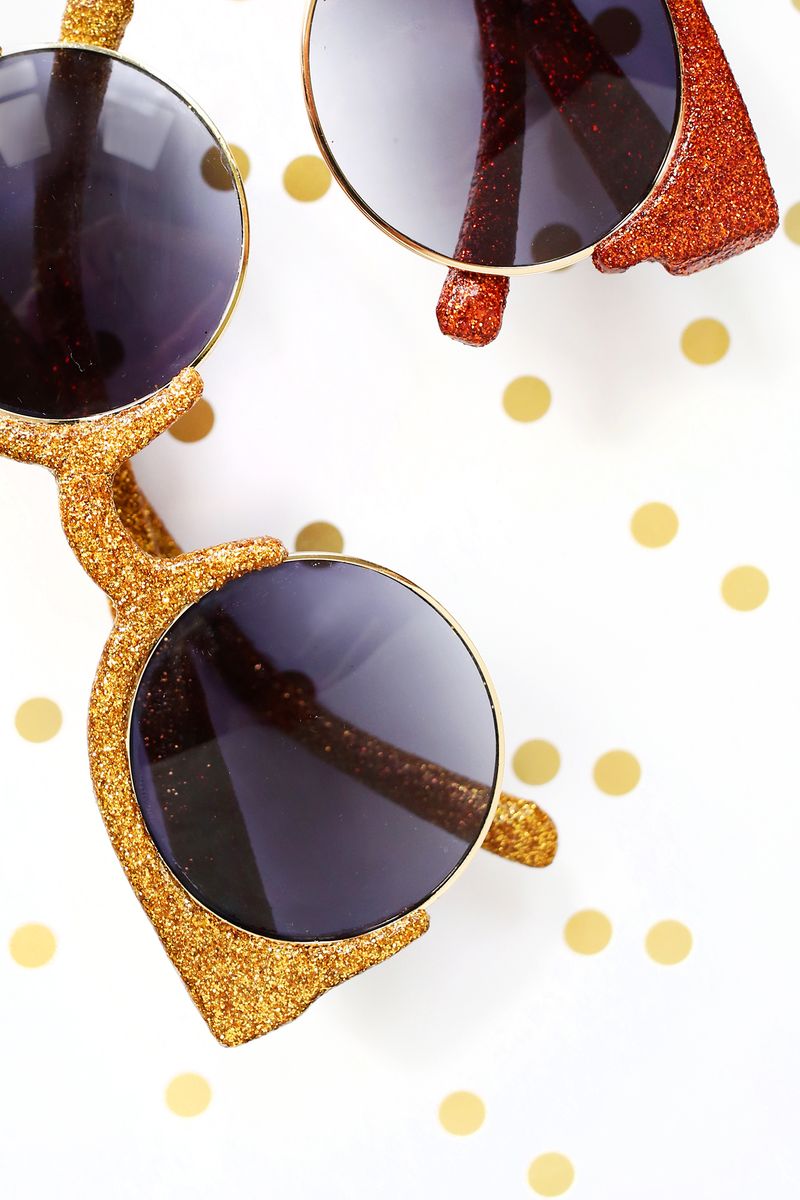 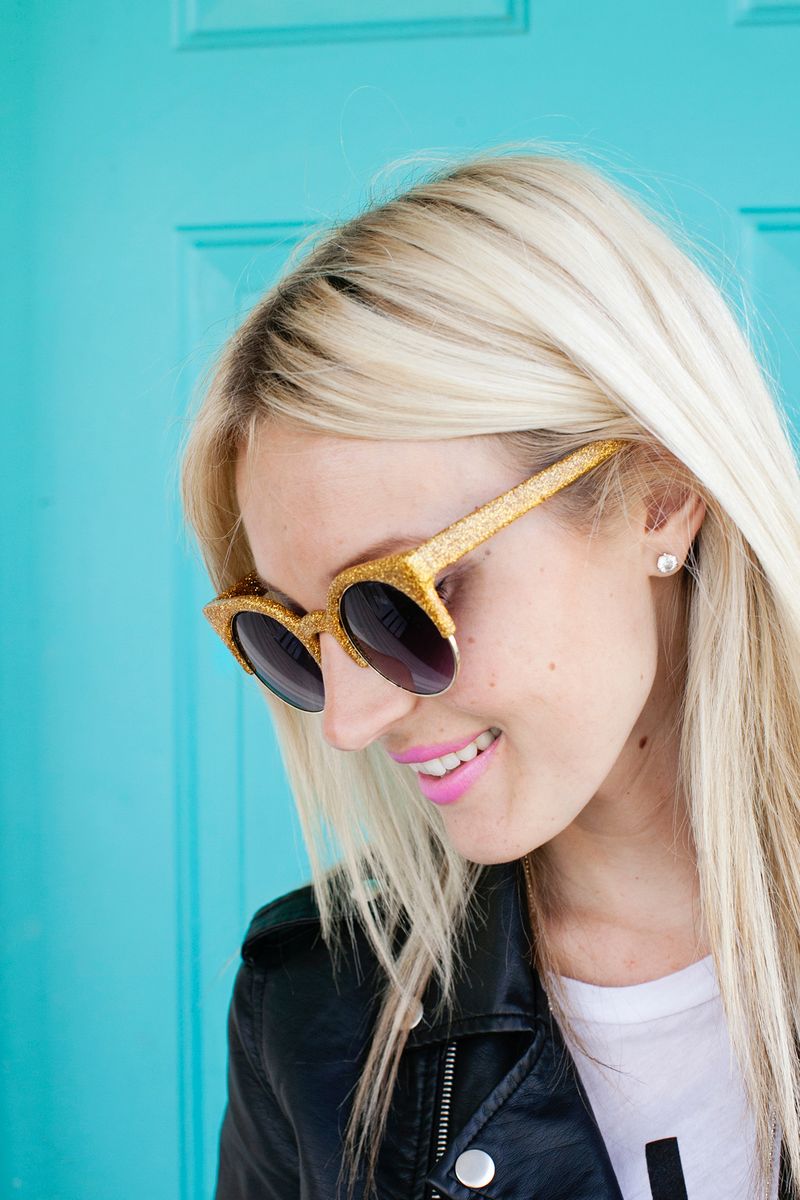 How fun is that? I can’t think of anything better for getting in the warm weather mood than a pair of glittered sunnies. Perfect for beach trips, outdoor parties, or, who am I kidding, just sitting around in my backyard reading magazines and eating popsicles. Think you’ll add some sparkle to your sunnies as well? xo. Laura