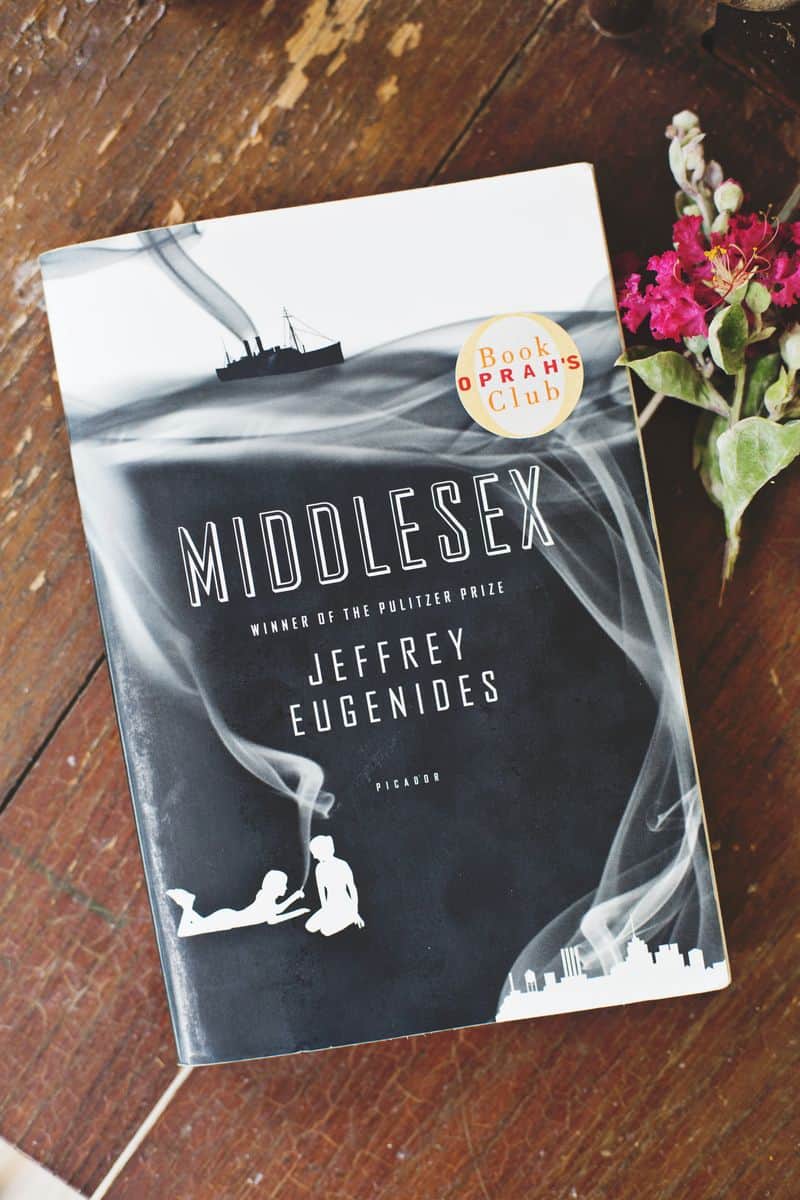 Truth be told, when I selected this book, I was a little worried. I’ve probably started and put down Middlesex five times over the past ten years, never getting further than a chapter or two. However, I spent about two weeks trying to make my selection for the book club, and Middlesex kept popping into my mind. Either a friend was reading it, I overheard a conversation about it, or the final tipping point, it fell off the shelf, barely missing my head. I took it as a sign I should probably just read the darn thing and decided to commit, and here we are a month later.

I have to just come right out and say that I LOVE THIS BOOK. It’s so funny to me that it took nearly a decade to finally read it, but I think in a way I’m glad it did. Maybe the timing had to be right…or my perspective had to be just right…or maybe I just put too much thought into things. Haha. But really, I absolutely devoured the book; the intricate story lines chronicling generations, the characters who peeled away more of themselves chapter after chapter, the descriptions of the mundane that Eugenides somehow made magical. Reading this book was an amazing experience.

And I think that for many people who pick up this novel, they too will think of it more as an experience than as just reading a book. As with anything, I’m sure some won’t like it, but if you do manage to fall in between the pages and get lost for a while, you’ll probably come out a little bit different than you were when you started. And isn’t that the purpose of a good book? To get lost, then find bits of yourself changed on your way out? I know for me, this book did exactly that.

So let’s begin. I feel a little nervous trying to simplify this book into bullet points– I really think I could talk about it for days– but in the spirit of conciseness, I’m going to limit it to just six or seven ideas. I’ll number each discussion point (some of these just thoughts, some questions), so if you’d like to number any of your corresponding comments, that would be great. Or if you just feel like writing your thoughts freestyle, that’s awesome too. I can’t wait to hear what you think. And for those who haven’t yet finished the book, be aware that there are spoilers below.

2) Let’s talk about the writing. The first thing that struck me was the narration style. This was what threw me off the first few times I tried to read the book. It begins before Calliope’s birth, and from there comes to the present, to the past again, and so on and so forth. At first this was off-putting to me. But as I read, it was like all the little puzzle pieces Eugenides gives us– a piece here, a piece there, something that might resemble a piece way back there– they all started to move towards one another, making sense of a seemingly confusing start. It was beautifully epic, and I was surprised by how well it all came together. So I ask you– did the narration style bother you? Did you enjoy the back and forth? For me, I feel like because it was such a long book (500+ pages), it was a welcome shift. I enjoyed having so much background and history (I can’t help but think of the immense research that went into writing this), and I loved seeing how it played out as we flipped back to the future.

3) Do you see yourself in Calliope or his journey at all? I feel like although some might not initially see any way they could relate to this character, that almost every single person can indeed relate in some way. For me, it was in that sometimes painful, curious, stumbling coming of age/coming into your own sexuality. From my point of view– someone whose gender identity matches the gender assigned at birth– the whole teenage journey was already bumpy enough. It’s very hard for me to imagine how difficult it must have been for Cal, someone whose gender identity did not match the one assigned. But I think whoever you are, there are similarities to be found in that awkward, universal experience of becoming who you will be. There are so many layers to it that are touched upon in the book– sexuality, friendship, parent/child relationships, puberty…and so I would love to know what part of Cal you related to most.

4) It was interesting to finish the book and look back at all of the relationships between words and symbols– Middlesex as the title and the street Calliope lived on, and really, being in the middle of his own “sex.” The motif of “middle” was prevalent throughout the novel, along with the theme of duality– one foot in and one foot out shown through cultures and time periods, relationships, and decisions. The silk worms– weaving their silk through the entire story; the Mulberry tree and its stages; Chapter 11 and his part in the family’s financial ruin/bankruptcy…but then also giving Cal the opportunity to wipe the slate clean and start over as his brother. When you think of your own life, do you see any symbols like this– any recurring themes or running motifs? If you were to write the story of your life, can you step back and see any constants, any ideas that have had a place throughout your story?

5) Did you have a favorite passage (or passages) from the book? I dog-eared my copy like crazy, underlining and highlighting, but I think my very favorite quote is this:

“Emotions, in my experience, aren’t covered by single words. I don’t believe in “sadness,” “joy,” or “regret.” Maybe the best proof that the language is patriarchal is that it oversimplifies feeling. I’d like to have at my disposal complicated hybrid emotions, Germanic train-car constructions like, say, “the happiness that attends disaster.” Or: “the disappointment of sleeping with one’s fantasy.” I’d like to show how “intimations of mortality brought on by aging family members” connects with “the hatred of mirrors that begins in middle age.” I’d like to have a word for “the sadness inspired by failing restaurants” as well as for “the excitement of getting a room with a minibar.” I’ve never had the right words to describe my life, and now that I’ve entered my story, I need them more than ever. ”

6) And then of course there’s the discussion of Dr. Luce. I’ve looked through some of the study guide that goes along with the book and had to stop and think about the question, “Was Dr. Luce the villain?” From my point of view, yes and no. I’m not sure if he was necessarily villainous as he was unethical. It was interesting to read from his perspective and imagine what he felt. Was he doing what he really felt was best for Cal, or was he doing what he felt was best for everyone else/society? The idea of surgeries like these taking place, either at birth or afterward, made me so upset. How terrible to have someone make a decision like that for you and to grow up never knowing the difference, but perhaps feeling different without knowing why. When I was looking through answers to this question, some readers also brought up Father Mike as a possible villain. For me, he definitely isn’t the villain either. So then is there one? Could the villain be more of an idea working against Cal? Society or society’s idea of “normal”? Old world medicine or time? What do you think?

7) And finally, a very broad question– what did you learn from Middlesex? I could go on about how introspective this book made me– thinking about my own adolescence, the sexual experiences I had, trying to put myself in totally different shoes and viewing my preteen and teenage years through that lens, but I’ll stop here and just say that yes, I definitely learned something. It also made me think back to when I had our first son, Henry. I posted something about finding out his gender via an anatomy scan, and one reader commented telling me that sex and gender did not necessarily go hand in hand. I was finding out the sex, not the gender. I didn’t know this prior to that comment, but I was grateful for that education. And so this novel reminds me of that. And other things too– about how so often we live in our own little world, blind to people who might be different than us, and how compassion and tolerance and choosing to learn about unknown things, rather than be scared of unknown things (or people or ideas) is paramount.

Thank you guys so much for reading this book with me this month, and thank you to Emma and Elsie for having me! As a former high school English teacher, writing out these discussion points has brought back many great memories, although I really would have loved to go on and on about so much more. I feel like I barely scratched the surface, especially when talking about Calliope’s family tree and all of the history preceding his birth. I can’t wait to chat more with you in the comments below though, and hopefully open up some additional avenues of thought too. xoxo. Dani (Come hang with me on Instagram!)