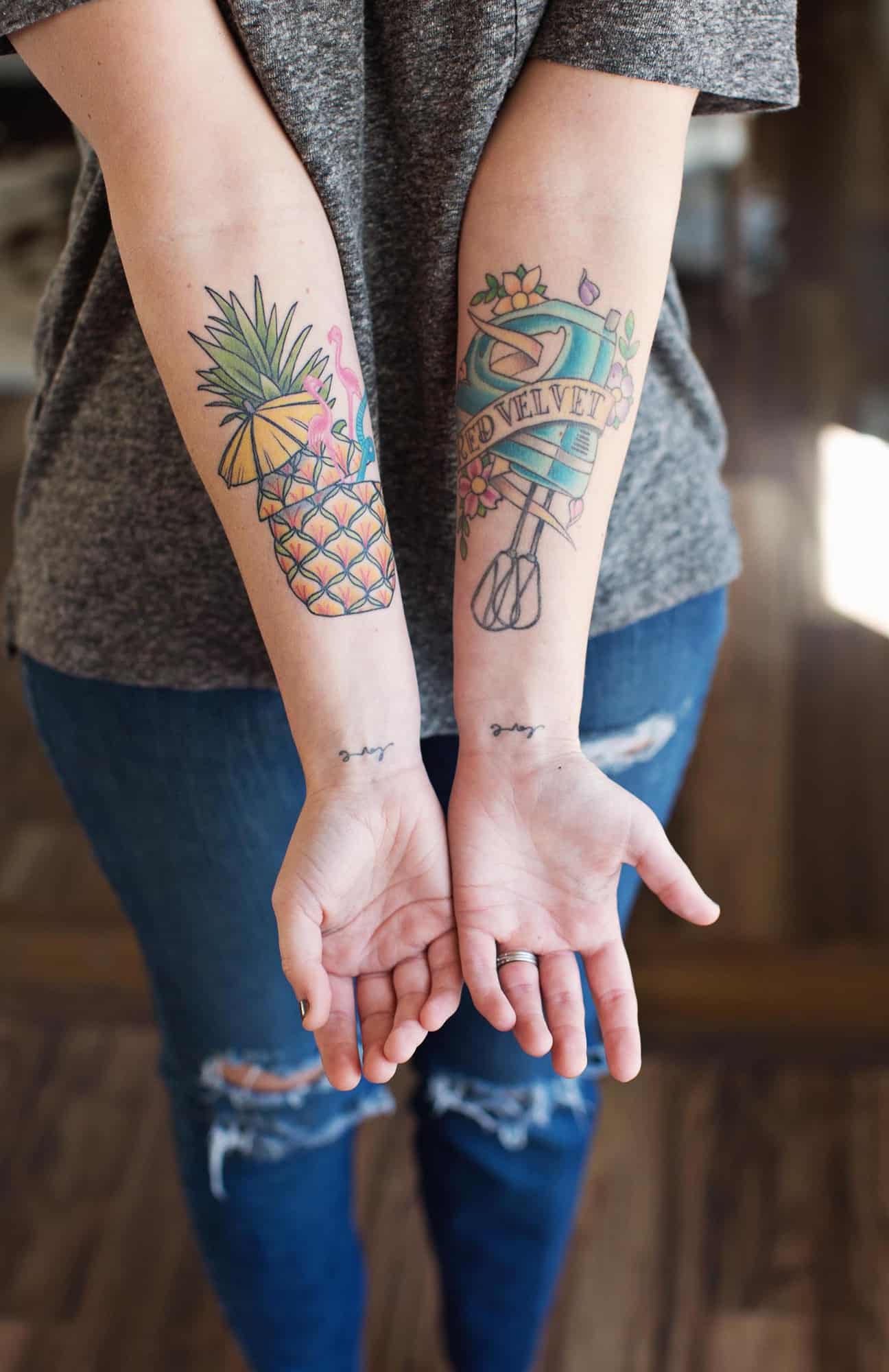 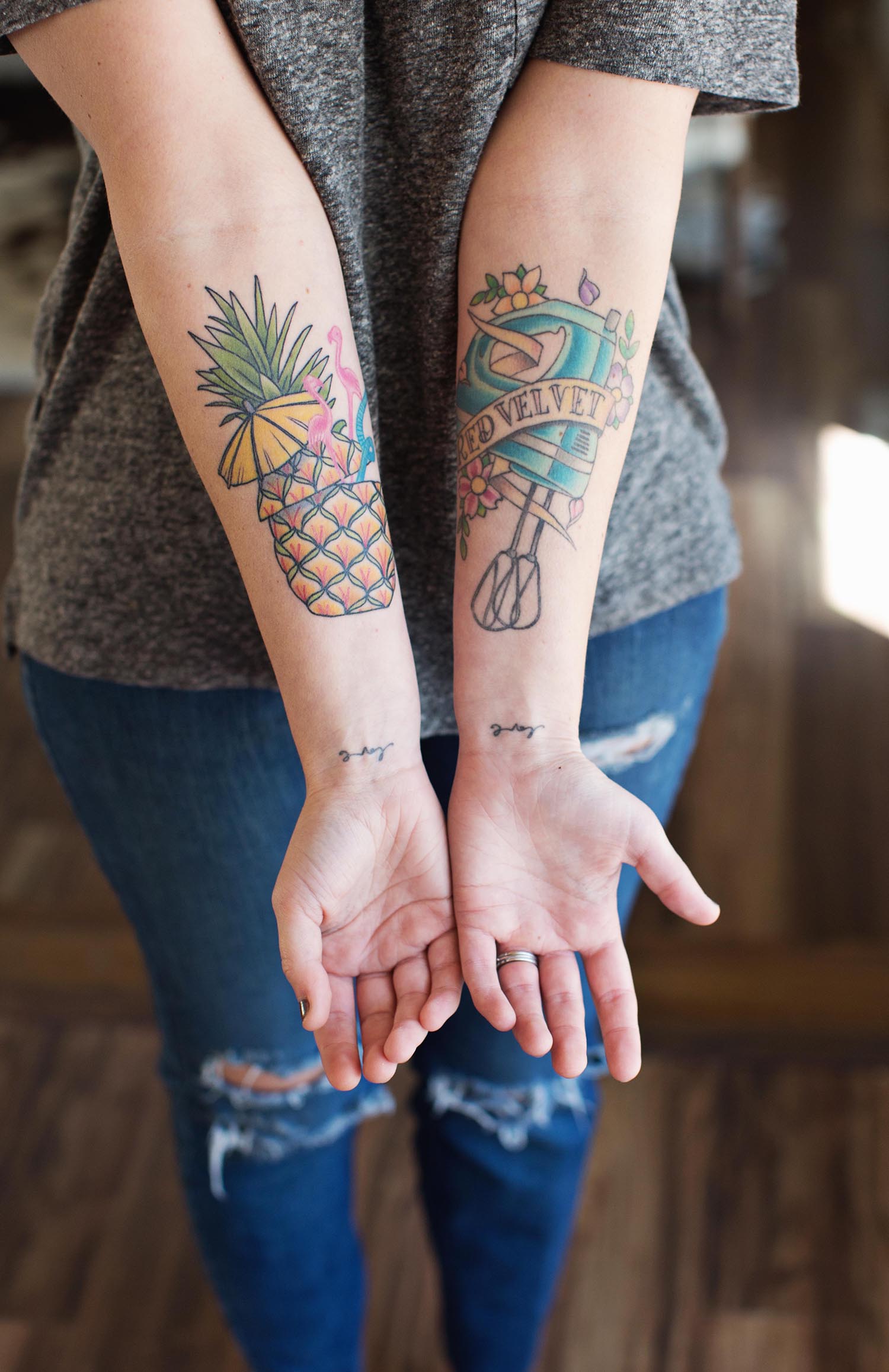 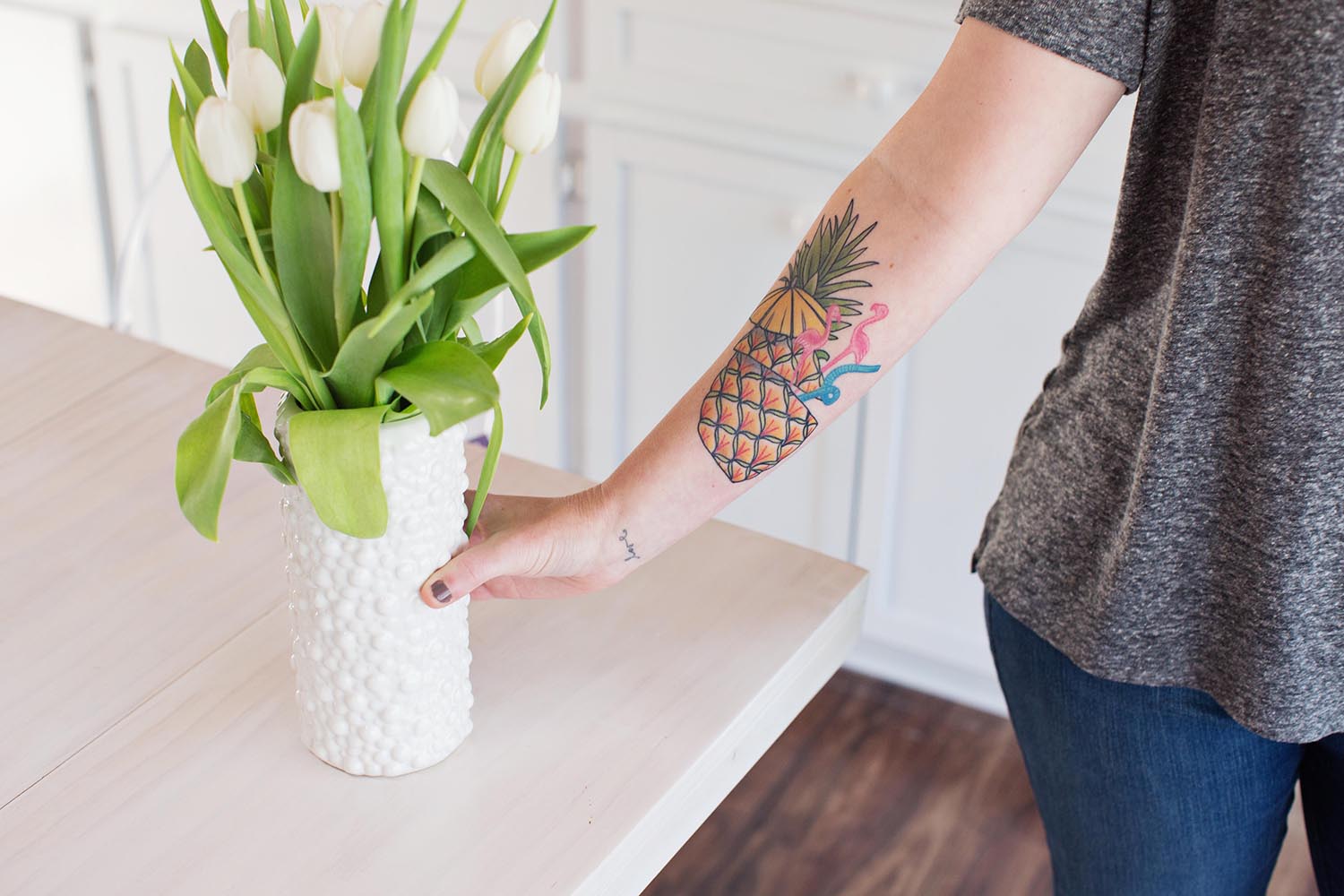 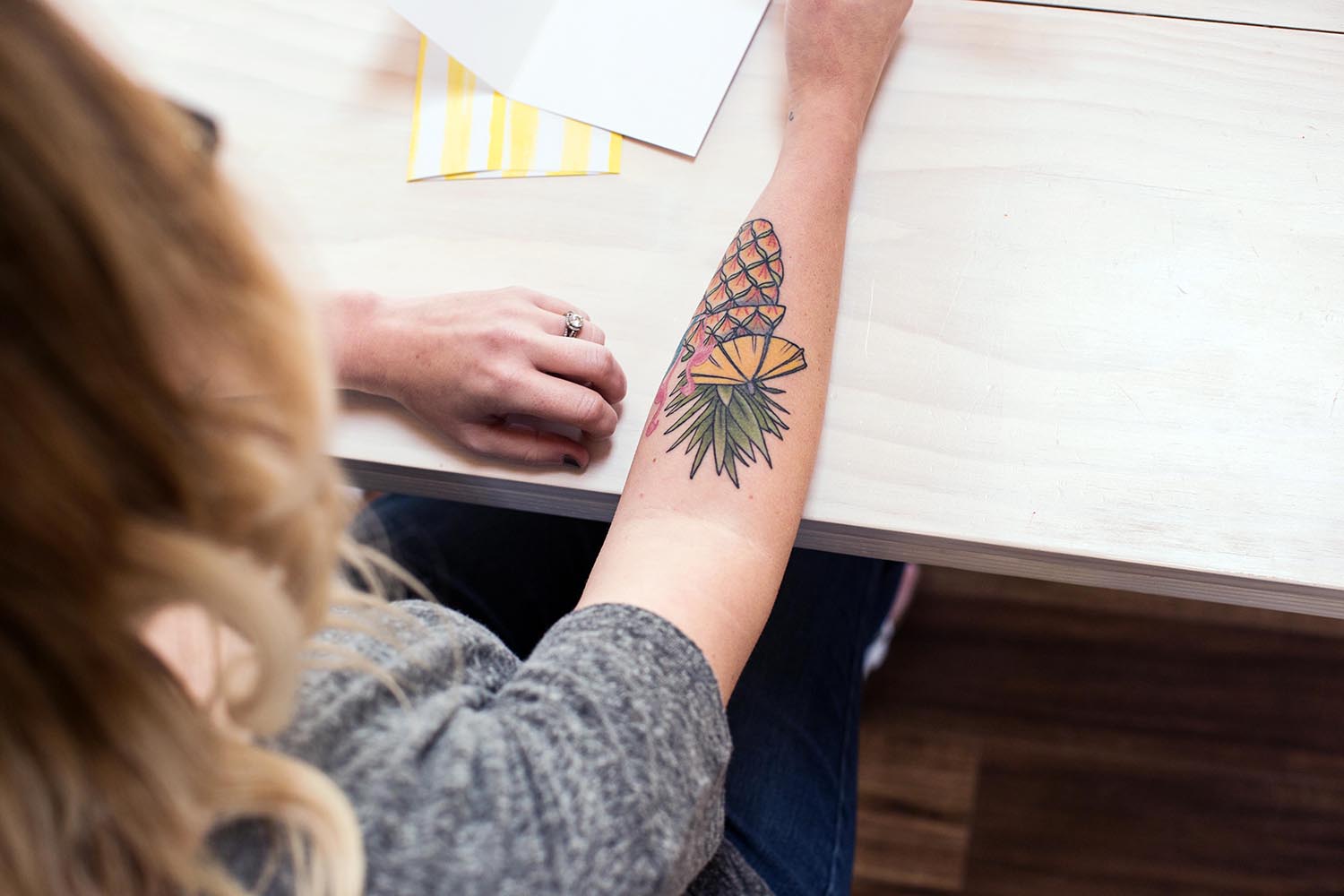 Maybe some of you remember when I last wrote about my tattoos. I have two little hand-written “love” on each wrist and a big blue hand-mixer on my left forearm. And now I have a big pineapple-maybe-it’s-a-drink-too on my right forearm.

This tattoo was a gift for my 30th birthday from my brother. He also got a tattoo the same day as me, also a pineapple, although his is a bit different than mine. So, in a way, it’s kind of a sibling tattoo. But also he got it for me because I had been talking about getting some kind of pineapple tattoo after the bar opened for a while now. So if you’re one of those people who really wants to know what it means… well, I guess it means that I have an awesome brother and an awesome bar.

I’m not huge on tattoo meanings. I sort of like a mix between, yeah it means something sort of, and it’s just really pretty. 🙂 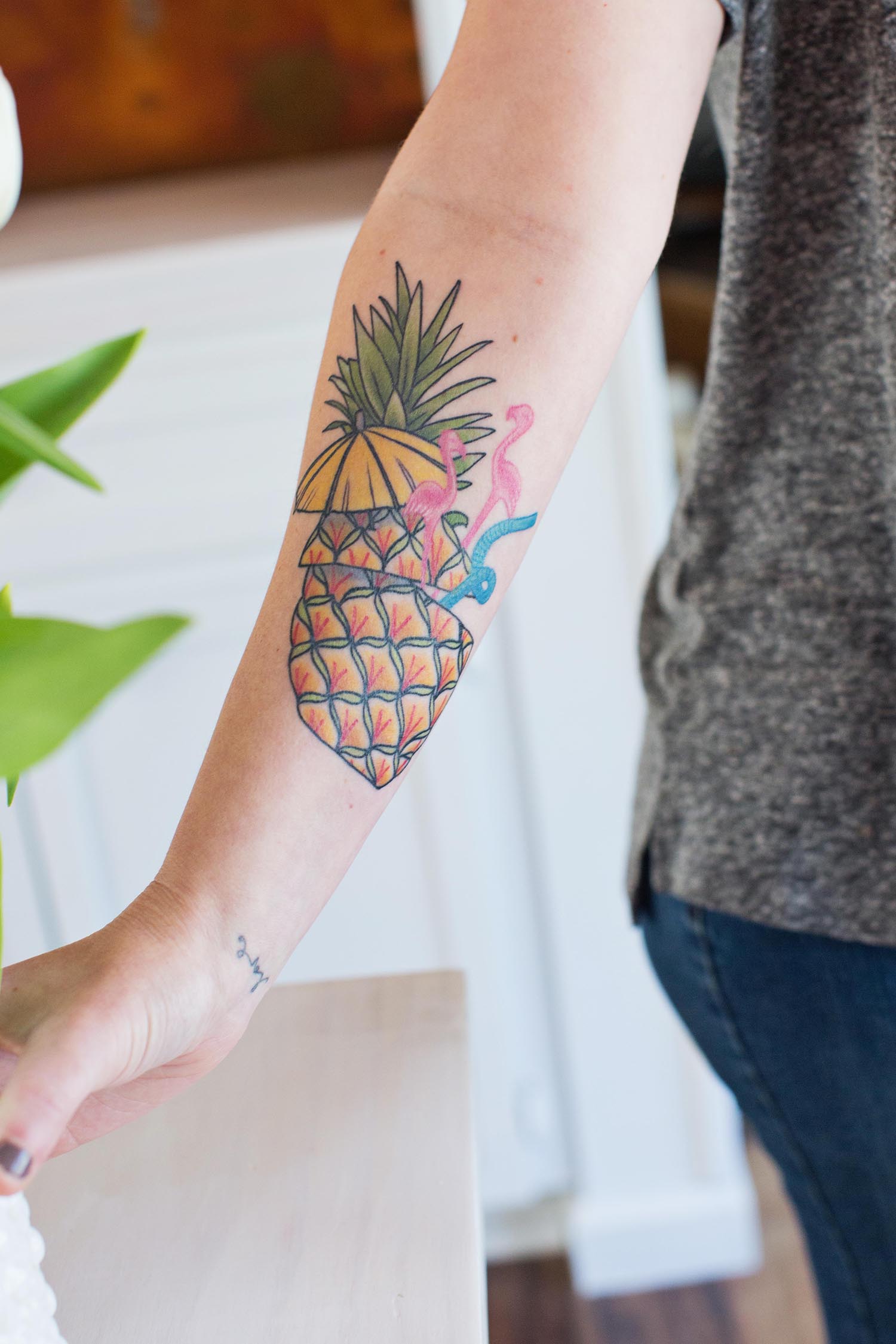 I got my tattoo at Hearts of Fire (in Springfield, MO) from Ethen. He really made the idea even better by adding the flamingos and also suggesting the straw be blue (I had thought about yellow but SO glad he said to go blue). So if you live anywhere near me, I highly recommend him – he’s also a really sweet guy.

It took about 2 hours to complete, and Doren (my bro) can tell you that I pretty much sat there quietly the whole time. Ha! I either didn’t remember how much my mixer hurt to get, or I’ve gotten way more, uh, aware of pain since then. I’m definitely not one of those people who really enjoys the process of getting the tattoo; I try not to look at the needle as much as possible. 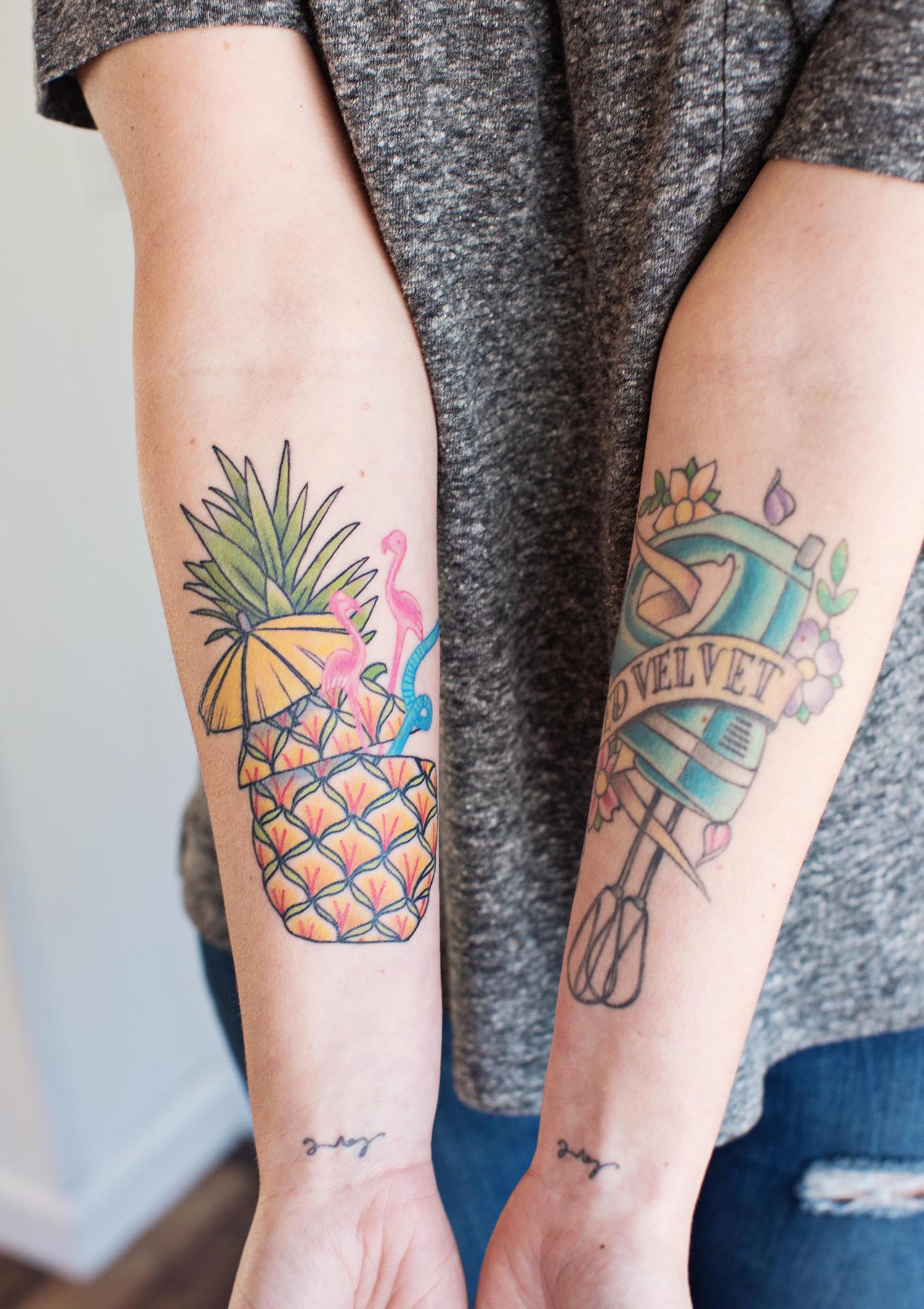 I really hesitate to say this, but, I sort of think this might be my last tattoo. Of course now that I’ve said that, it probably won’t be.

Idk, after getting my mixer, I just sort of felt like I’d probably get another some day. But after getting the pineapple, I sort of feel like this might be it. But, who knows? Life is long, and I clearly don’t think there’s an age when you have to stop getting tattoos. So we’ll just see. But I am out of forearm space, so where am I even going to put it?! 🙂

Anyway, kind of a random post I guess. But just wanted to share my new tattoo with you all. And if you totally hate tattoos, I hope you skipped this one. 🙂 xo. Emma

Adorable and personal. Exactly what we would expect from you! I love hearing the stories behind your tattoos, which is something we don’t get to learn about other people that often. While their not for everyone, I appreciate them as well and have quite a collection going myself. Hoping to get a vintage/antique/mother themed soon to commemorate the antique store I run online with my mom. Happy Inking! 🙂

It’s so cute, but MAN that must have hurt! I have a couple of tiny tatts and the shading was the killer part for me. I admire your bravery sitting through all that shading.
I’m with you on tattoos not having to ‘mean’ something, too. I have a little vintage plane and a pen nib…and I could try to make them sound deep, but actually I just like them 😉

Love the shade of blue you used in both the mixer tattoo and the pineapple one.

I like it, goof choice of colors, the blue pops up the yellow

OMG! I absolutely love this tattoo!! I love pineapples and have always thought about getting one tattooed. What a great design! So fun!

I think both are awesome – especially since they have personal meaning to you. The blue straw looks good next to the blue mixer, sort of ties the two together.

omg! these have to be my fav tattoo out of all that I’ve ever seen.
I wany tropical tattoos but havent seen one I really like.
I also thought about have a tiny pineapple on me but yours is so freaking perfect!

Ahh! It looks SO amazing! I’ve been wanting a tattoo for years (like basically since I was a kid), but I never know what to get! I recently decided to get one of my cat (yup, crazy cat lady over here hah), but I’m so scared about the pain as I really don’t do well with pain! Hopefully some day, I’ll get one!
xo April | April Everyday

Emma, I love it! It’s such a good style and so much fun. Makes me want summore!

I’m so loving this! I have Carmen Miranda with a fruit turban on my shoulder, that then spills over onto my collection of tropical fruit. I pretty much squealed when I saw yours on Instagram!

I was going to say this too!

Am I imagining things or do your love tattoos spell ‘Trey’ upside down?

You’ve probably already explained this in a previous post, but I just didn’t see it. I saw your “love” tattoos and wondered if they were supposed to look like “Trey” when you look at them upside down…? Your latest tattoo is awesome though! Love that you put your passions on your arms for everyone to see!

First, the tattoo is stunningly pretty! Before I read your text and just looked at the pictures I thought, those flamingos rock!! Then you explained Ethen’s ideas on them and the blue straw, and I looked again and thought wow!
This tattoo artist is perceptive/tuned to his artistry – yes, the blue straw… it adds great color and connects to your blue mixer! Subtle but pop! Beautiful – oh gosh, it must make you happy. 🙂

I could have sworn that your wrist said Trey, from the perspective of the photo. Pretty cool that they are love from your perspective and Trey from everyone else’s.

Love it Emma! It goes great with your mixer tattoo. It’s just lovely!!!

I am envious – looks great. I got my tattoo on my 40th birthday with my two cousins who also got their so like you that was part of the memory! Enjoy.

Super cute. Tattoos can be meaningful, but the more important thing is that they be something you want to look at over and over again. I’d definitely enjoy one like this!!! As for more tattoos – get one down the road if you want to, but you don’t have to decide today. There are ankles, calves, feet, shoulders… all kinds of places to act as a canvas!