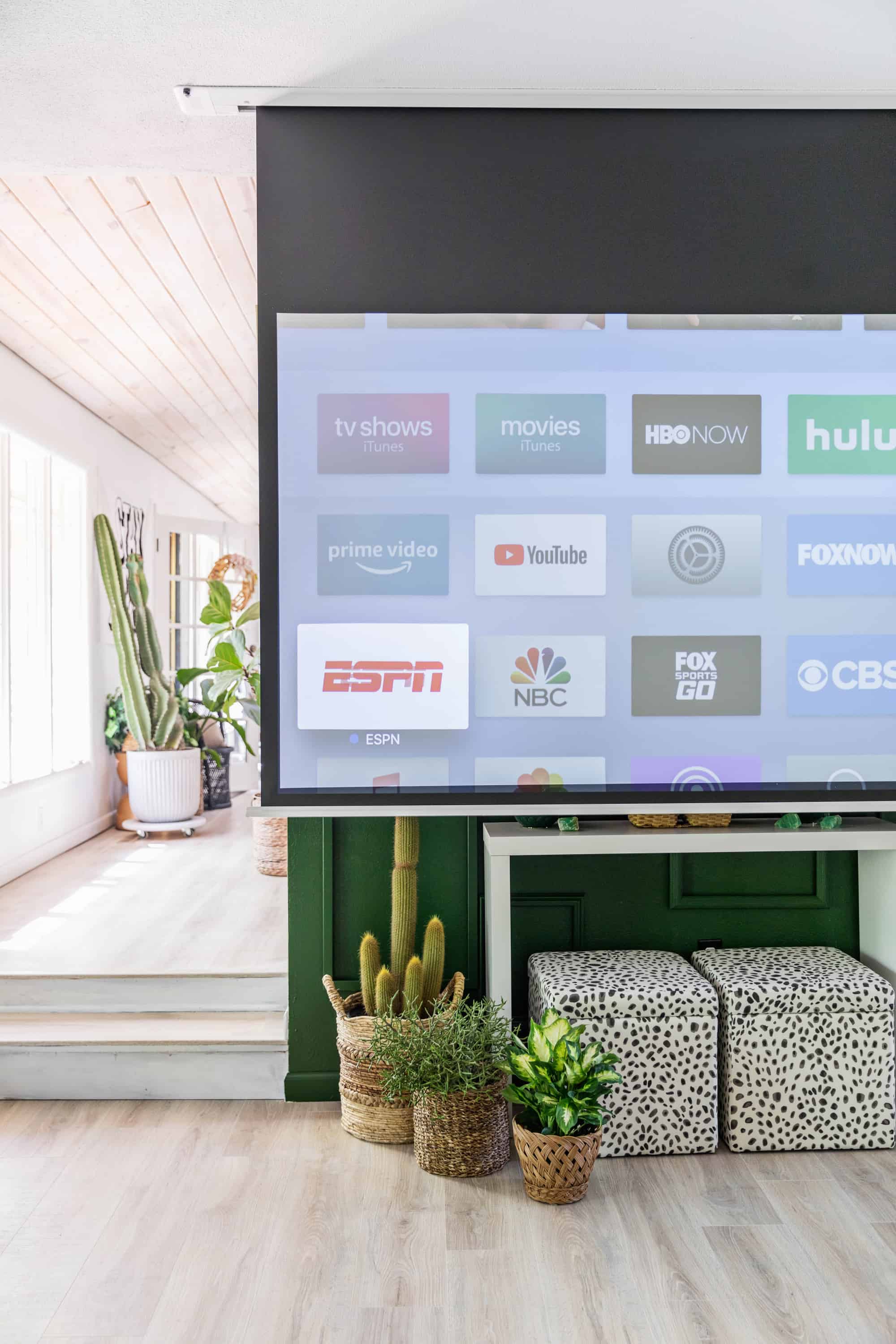 My birthday is in January (the 21st, if you’re curious) and this year Trey got me a projector and screen for my birthday! It’s something we had been talking about as the TV we owned was something he had since college, and although it still worked fine, we had just been thinking about making an upgrade.

But we are both pretty cheap people (I guess this is relative, but I just mean that we hesitate a long time before major purchases), so we had been talking about it for a while at that point, but hadn’t felt any urgency.

One thing we were interested in was getting a projector and screen, instead of a TV. This is what Elsie and Jeremy also have in their home and Trey and I really liked it when we visited them and have used it. Trey and I both LOVE movies, that’s probably the date night activity we do the most. You can learn more about switching to a projector here too!

We also have a number of TV shows we like, but we don’t necessarily watch TV every night. So, a projector felt like a good fit for us because it feels special (like a home movie theater), but it’s also this special-ness (that’s not a word, is it?) that I think sort of encourages more intentional TV watching. And I like that.

Oh, and I should note that I took these photos on a pretty bright day. Normally the screen, and our living room in general, are much darker and easier to see. For these photos, we had also pulled back the curtains on the windows in the room just so we could get some clear shots, but normally when we watch TV we pull them more closed. My point: It looks much better than this at night … it’s just hard to photograph at night to show you. 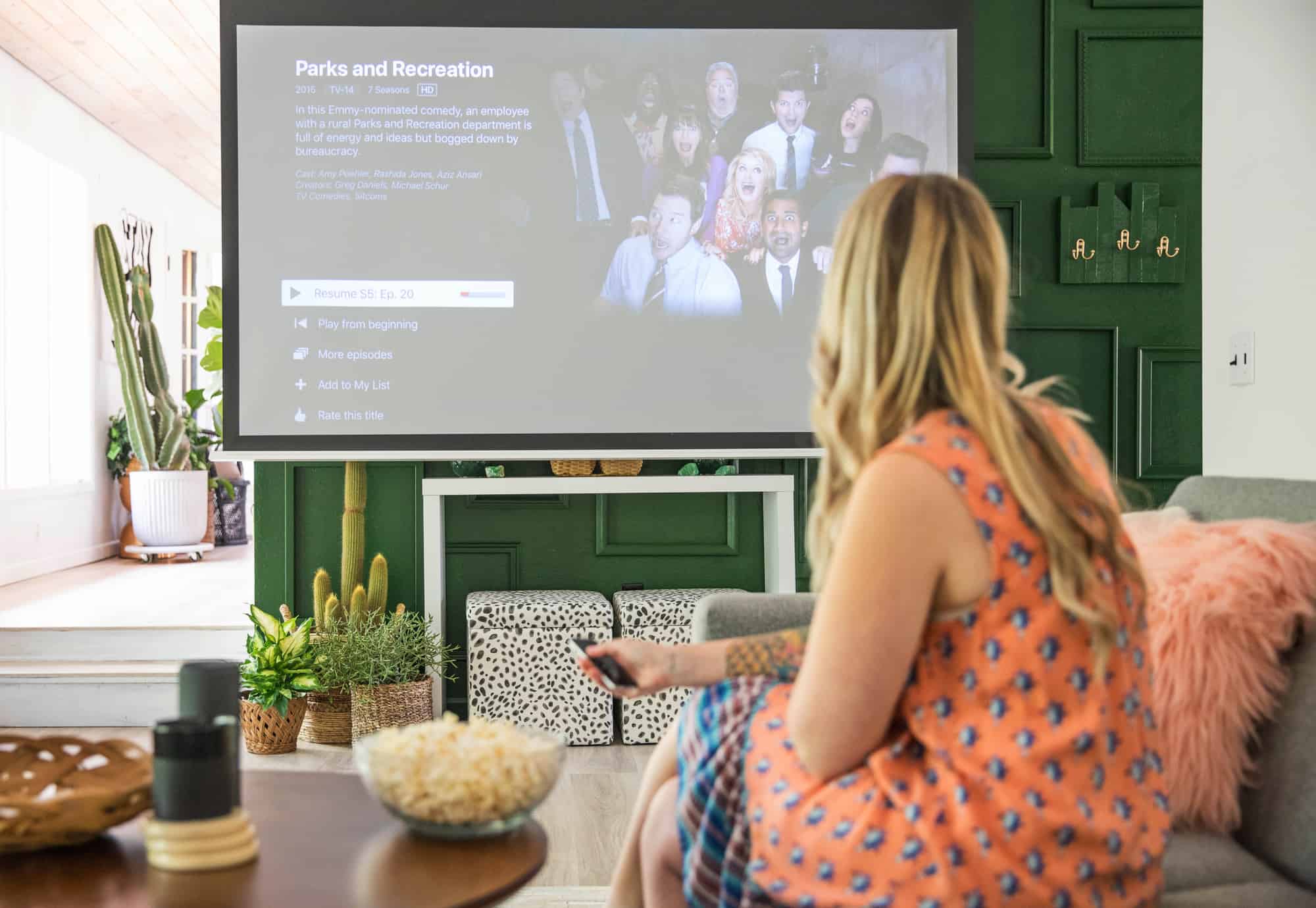 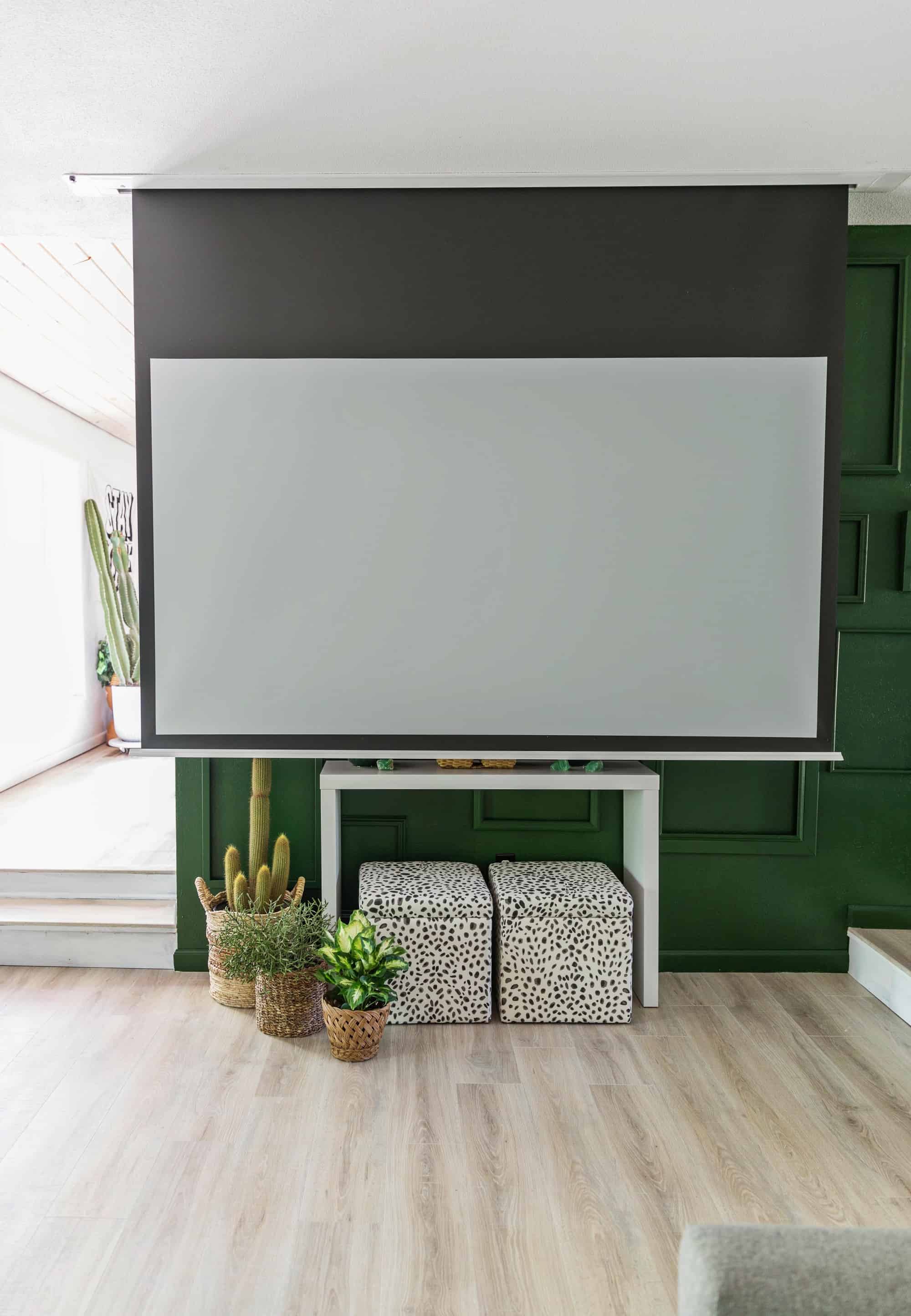 And, of course, we really liked the look! Not only does it feel really cool to watch movies and shows on this big screen, but it also completely disappears from the space when it’s not in use because our screen rolls up into our ceiling and our projector is pretty hard to spot in the room.

So it essentially looks like we don’t have a TV at all, and then BOOM—giant movie theater room! I love it and it’s probably the best birthday gift he’s ever given me, although he’s a pretty good gift giver in general. 🙂

So that’s my review. And in case any of you are considering this type of thing, I thought I would share some more specific thoughts about our setup in the hopes that it helps you shop for your own or what might work best for you and your priorities.

We also have Apple TV, which is what we had with our last TV as well. We pay for Hulu Plus, Netflix, and HBO Now. We sometimes rent or buy movies from iTunes as well. That’s pretty much where we get all our movies and shows from. The one thing that we don’t really have is sports, but neither of us watch a lot of sports.

However, I have heard that YouTube Red is really good for sports and affordable, so there’s an option to investigate if you’re interested. Also, you probably don’t need all the subscriptions we have (or you may want more), depending on your needs. (I feel like I should put “needs” in quotes there since we are talking about TV programs …) 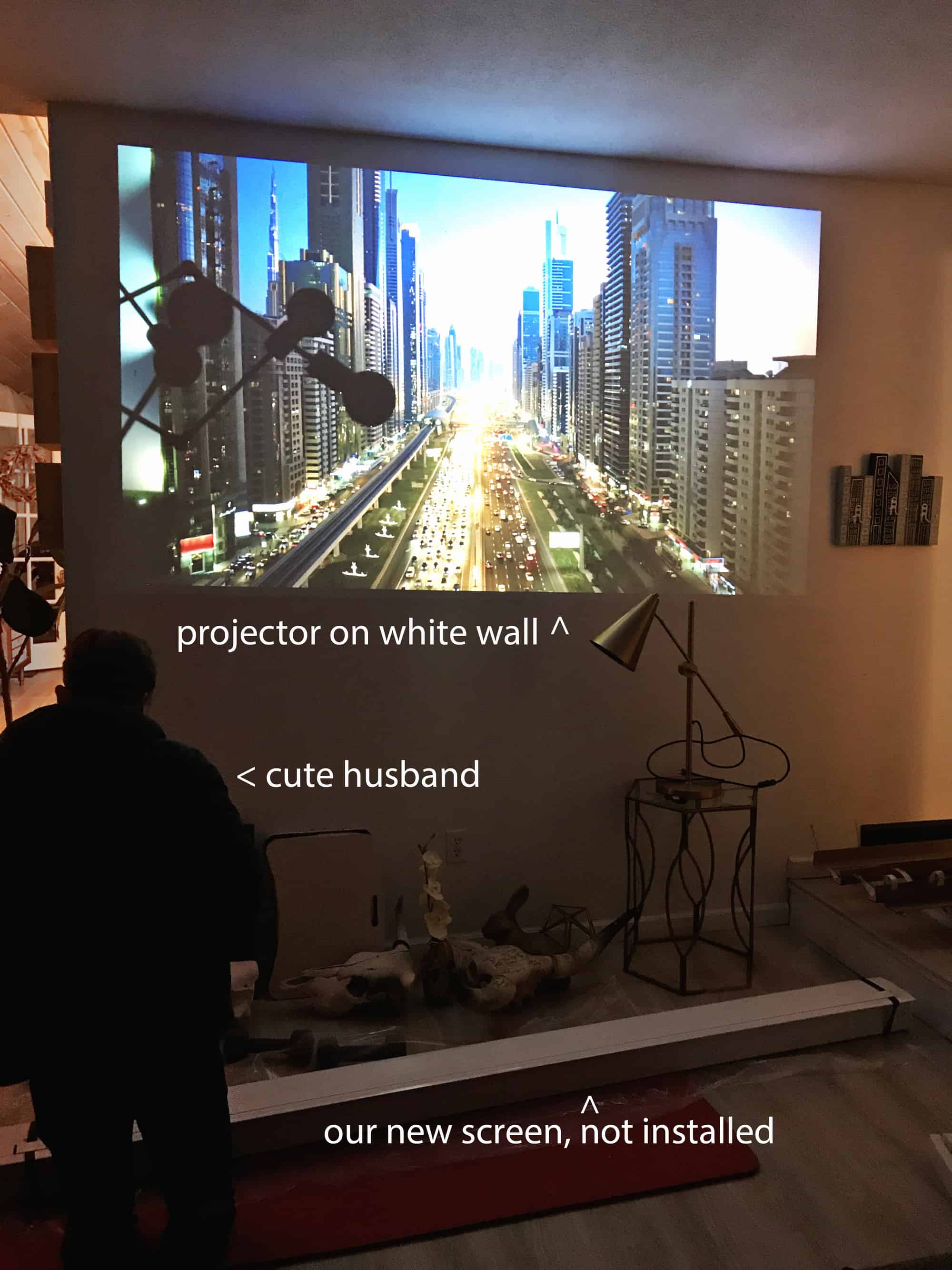 First off, you don’t have to have a screen with the projector. If you wanted to just buy the projector and project the image onto a white wall you totally could. In the photo above, you can see this.

Sorry for the quality, this is just a cell phone picture I took the night we were setting up the projector and the screen was getting installed the next day. But you can see what the picture looks like projected onto a white wall, as I hadn’t painted our wall green yet.

It looks good, or at least I think so. So you could totally leave a wall blank and skip the screen if you were OK to have a blank white wall in your home.

I should also say that our screen was installed professionally, and not at all a DIY. Setting up the projector is no problem really, but neither Trey nor I felt we were capable of cutting a hole in the ceiling and getting the screen in the exact spot we wanted.

So we hired someone to do this and he did a great job! If you’re a Springfield, Missouri local and want his number just email or send me a DM on Instagram. 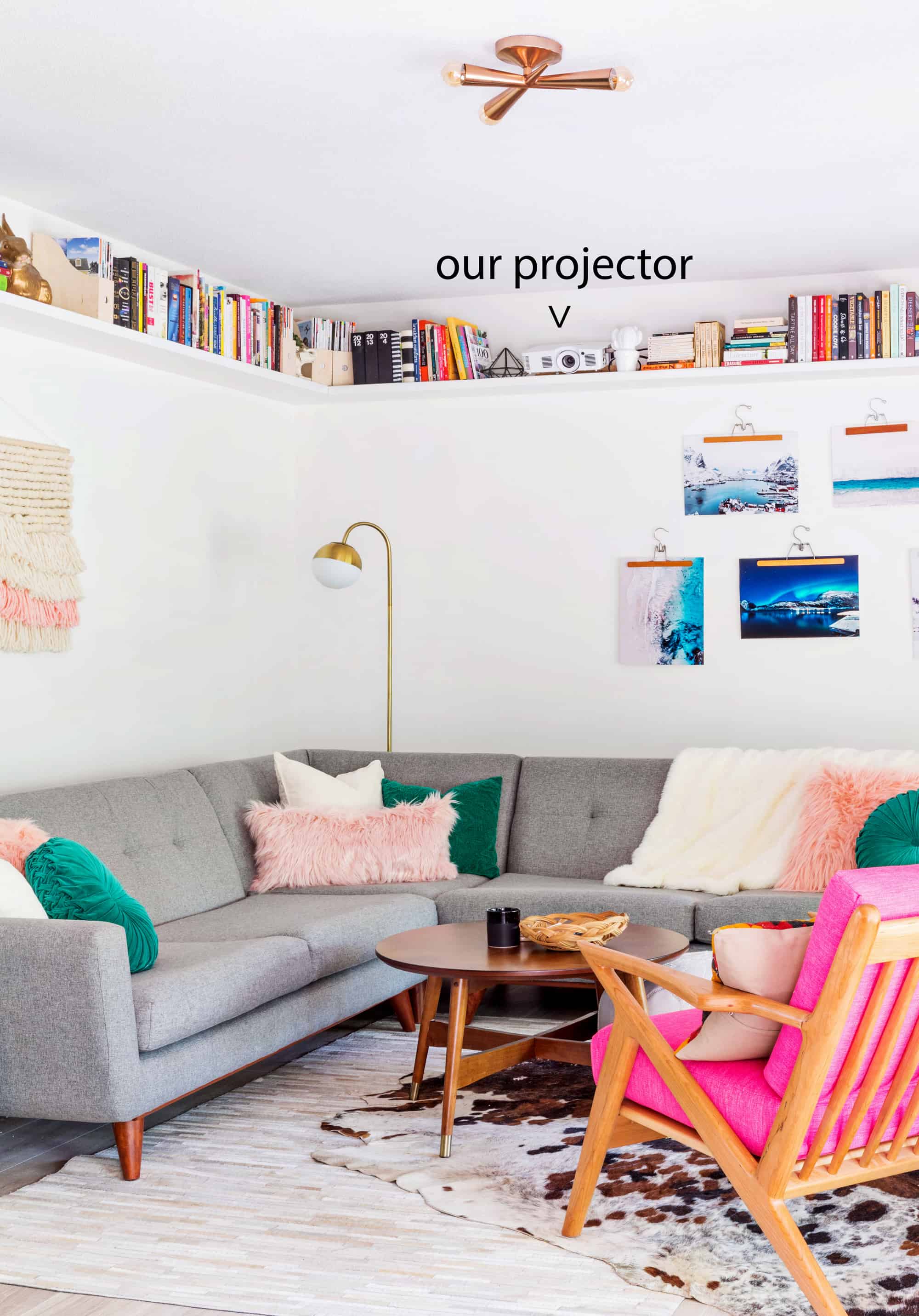 Here is the other half of our living room, just opposite of the green wall with the screen. We had a floating shelf installed for my book collection and our projector just sits on there, basically hidden.

Given where the shelf was located, we did need to angle the projector down some, since we wanted our screen lower (more even with our eyesight when we would be sitting on the couch), but this was easy as it has adjustable legs on it.

One minor drawback to this setup though is we really couldn’t have a low hanging—or hanging at all, really—light fixture in the middle of the room.

We had a kind of black, spider chandelier in the room before. But we needed something basically flush with the ceiling so it wouldn’t partially block the projection. I really like this little copper looking one we found, but I must admit that this very much limited our lighting fixture options. 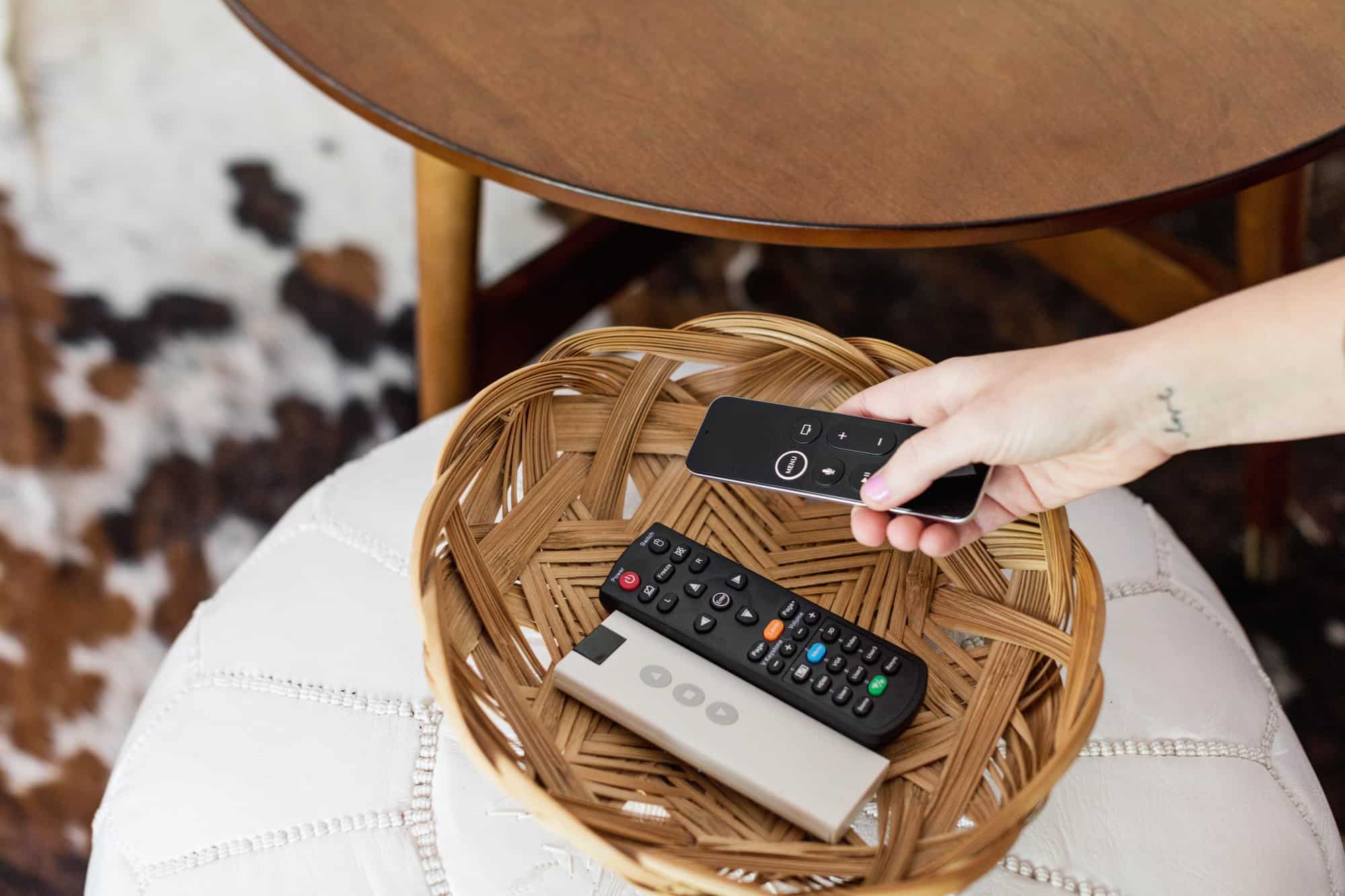 And speaking of drawbacks, this is probably the main thing I don’t love about this setup. We now have three different remotes that we need in order to control the TV. One remote lowers and raises the screen (it came with the screen).

One remote is for the projector; it turns it on and does a few other functions. And the last remote is for the Apple TV. I don’t know if we could get a universal remote to program all of these together (I kind of doubt it), but if anyone knows a solution, let me know in the comments!

Of course, it’s not a big deal to have multiple remotes. Just a little inconvenient, but totally worth it to me. I am a little nervous that we will lose them, which is why I got this little basket that they all go in that sits on the coffee table. I am hoping we will just get into the habit of putting the remotes there when not using them (so they don’t get lost), but we’ll see. 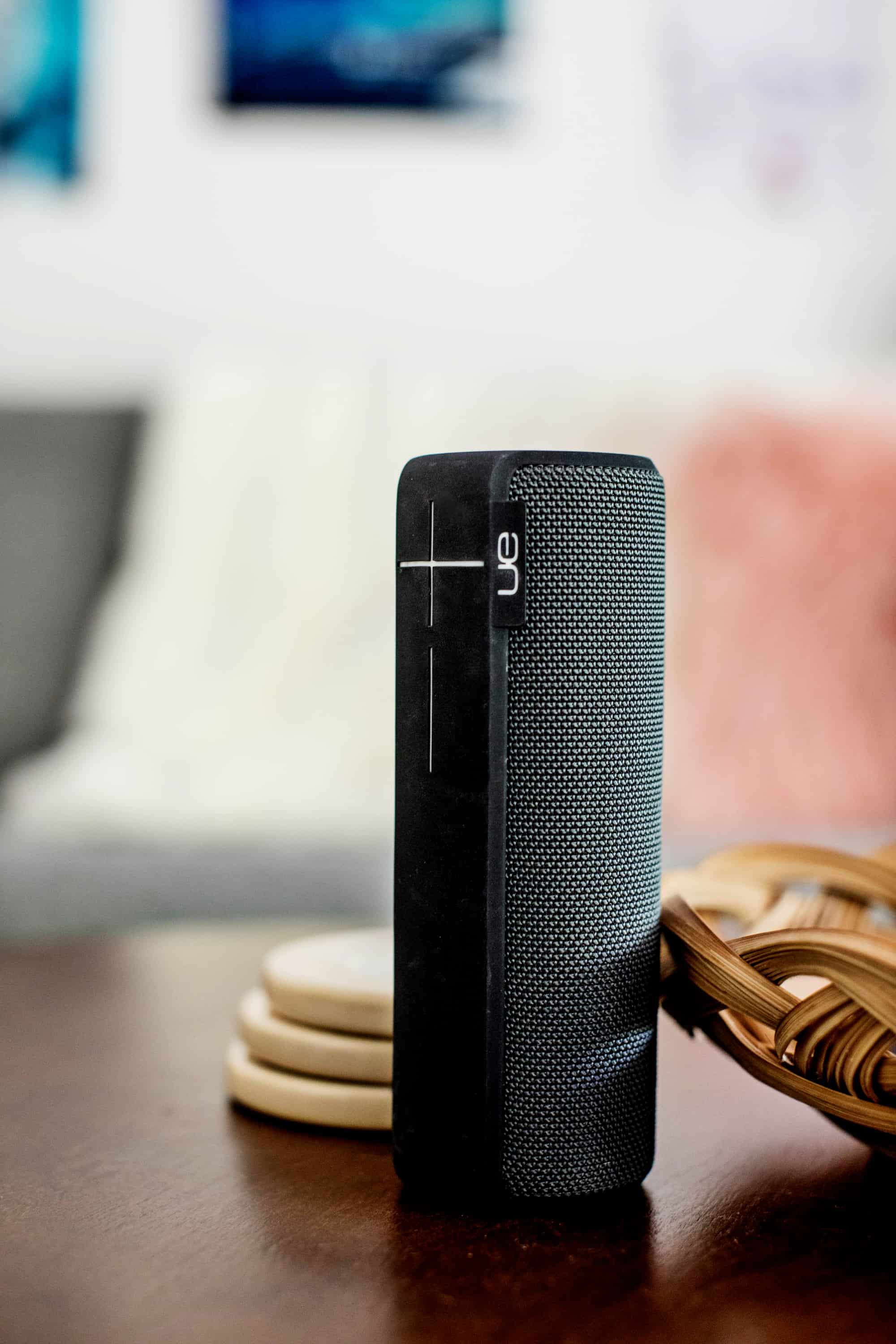 And the last thing I wanted to mention is sound. The projector does have sound, but it’s not great. Honestly, it’s pretty hard to hear when it’s on because the projector also has a kind of fan in it that runs while it’s in use, so the sound is just not great. You will probably want some kind of other speaker.

We will probably invest in something else in the future, maybe? But for now this is what we use. We actually already owned this speaker, we use it for parties to plug into our record player to amplify the sound, and we liked that it’s waterproof so we can take it on the lake or out by our hot tub.

And it works with our Apple TV, so we just turn the speaker on and can adjust it right on the side. It’s easy, it just sits on our coffee table, and it sounds good. It’s not fancy, like a surround-sound system or something like that, but it works really well and, like I said, we already owned it. 🙂 We may upgrade our sound someday but it won’t surprise me if we just use this little guy for a few years.

Thanks for letting me share! I’ve gotten so many questions about this every time I’ve shared something on Instagram that I wanted to put everything in one place. 🙂 xo. Emma