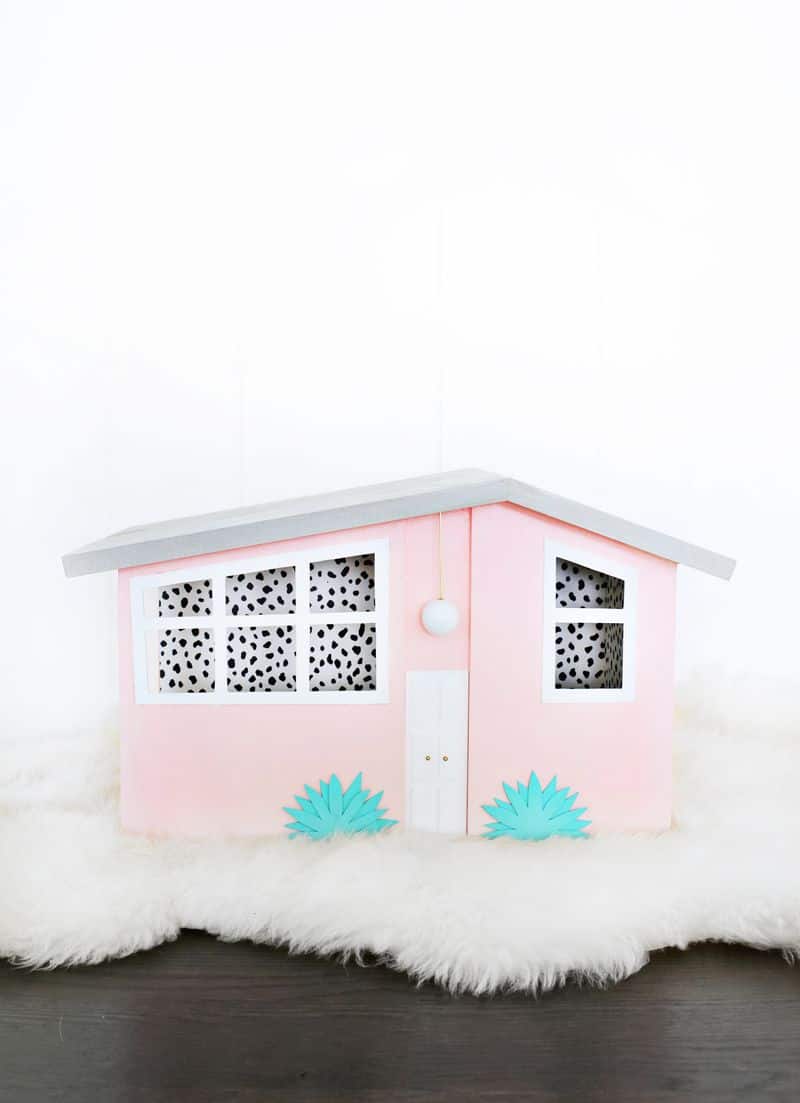 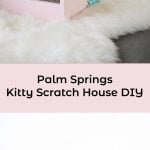 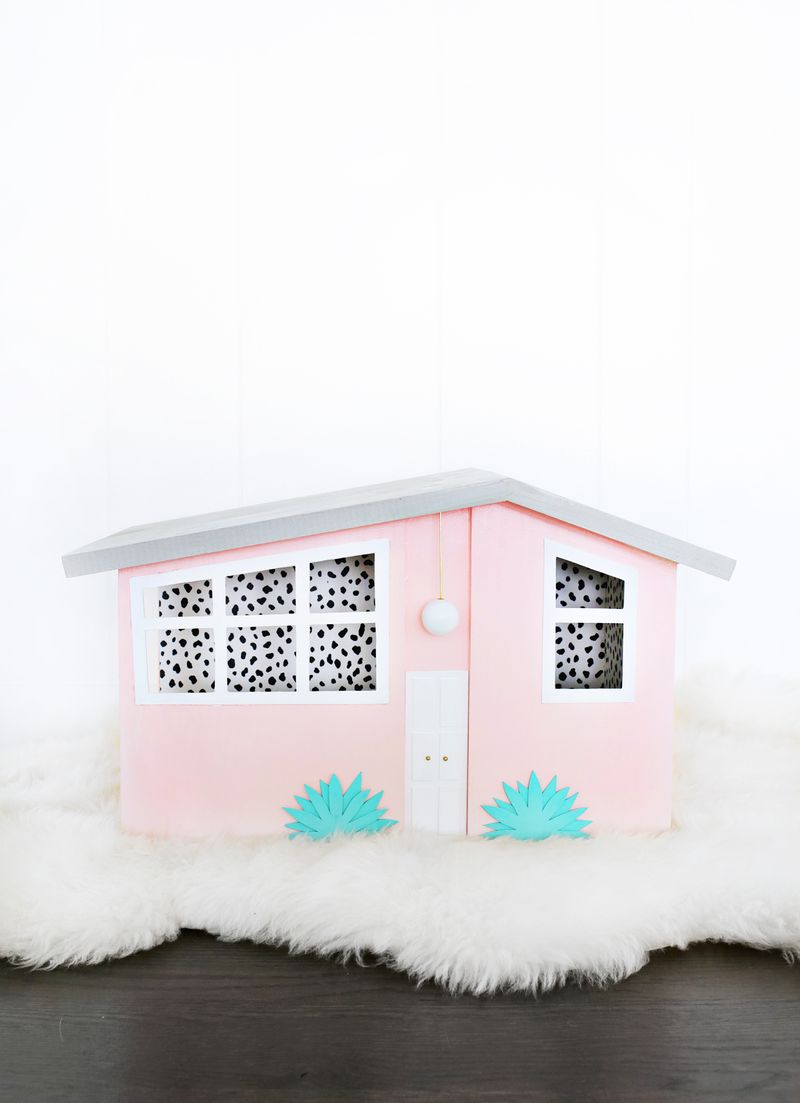 If you have pets of any kind, you already know the struggle between pet items that are necessary to have around but are not necessarily your favorite thing to look at everyday. I realized that we had a “scratcher” cat pretty quickly once we got our second cat Mac. At some point I noticed that more and more often he’d been trying to scratch up different rugs or furniture pieces. He needed an outlet for his animal instinct to sharpen his claws—a scratcher! I originally made this scratching post for him, which he used right away (which thrilled me of course), but after only a few weeks, he wouldn’t use it anymore and back to the floor and rugs he went. I eventually realized that different cats have different scratching “preferences”, and he likes to scratch in a horizontal position the best (rather than up a pole). So I got him a scratcher that sat on the floor, and he used it several times a day for months. I could tell how much he loved it.

The only thing I didn’t love was the look of having the scratcher out in our living room (near the rug he usually liked to scratch on the most). I bought one that was shaped like a little cardboard house (the cutest one I could find), but, eh, it just looks OK for something that sits in my living room. One day when I was lamenting and wondering how I could improve the little cardboard house, I realized that instead of adding to that house, I should make the perfect house (A PALM SPRING HOUSE) for his scratcher instead! If I built a wooden structure that would fit a standard scratching pad, I could replace the pad as needed but keep the adorable house forever! Problem solved. 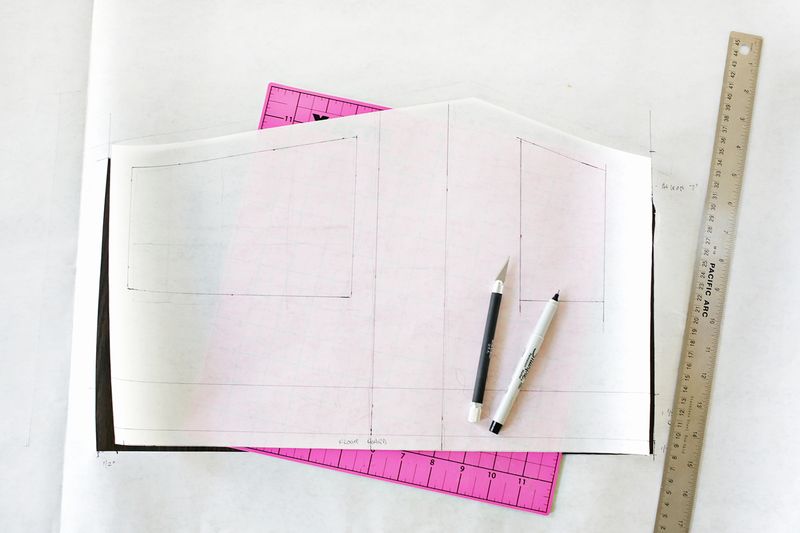 First, I had to decide what shape of house I wanted. There are lots of cute Palm Springs house shapes, but I thought a slightly asymmetrical ranch style would work best for this project. Since Mac already has a scratch house, I took a look at his current house to get an idea of the minimum measurements the house and opening would have to be (once I knew it was a size he would fit in, I could adjust the shape aesthetically from there). I used some craft paper to mark out the minimum size the front of the house would have to be, and then proceeded to add the house details from there. I knew I wanted the side opening to be 9.5″ tall and 7.5″ wide and the floor of the house had to fit the 9.5 x 17.75″ cardboard scratching insert

. When thinking of how tall to make the sides of the house (so that the roof would still be tall enough for Mac once completed), I also had to take into account the thickness of the 1/2″ plywood piece for the floor of the house and the scratching pad height as well. 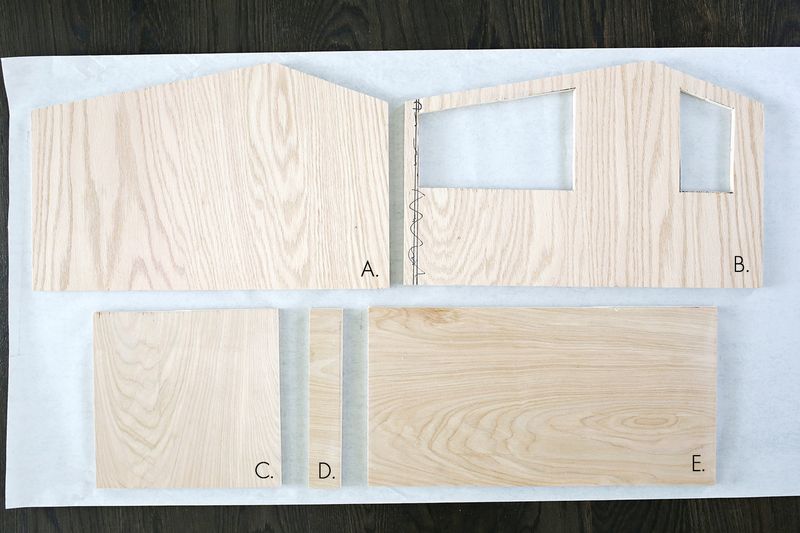 Since the house is too big to give you a template, I’ll give you the dimensions of the pieces instead.

Once I had the pattern for each piece, I used my handy dandy jig saw to cut out each piece. JIG SAW TIP: To make a straight cut with your jig saw, clamp a ruler to your wood (parallel to the line you want to cut) so the metal side guide of your saw can run right up against it and give you a perfectly straight line. 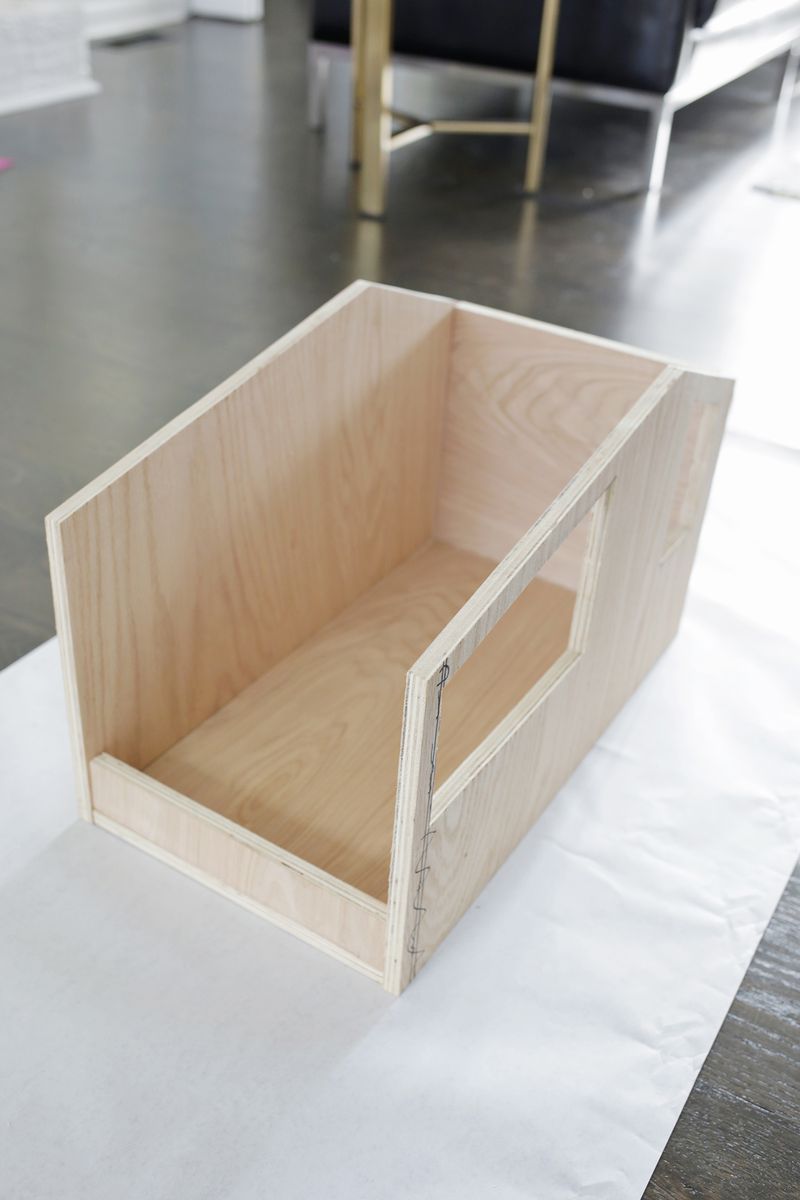 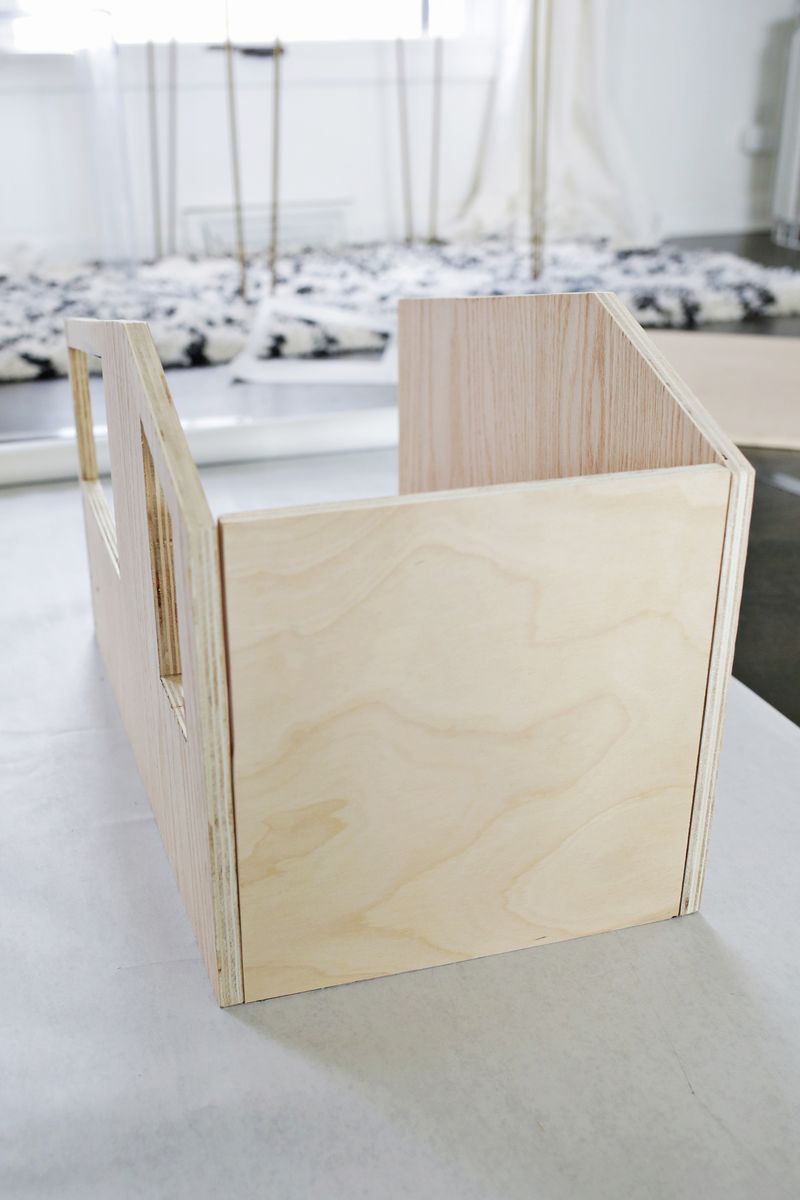 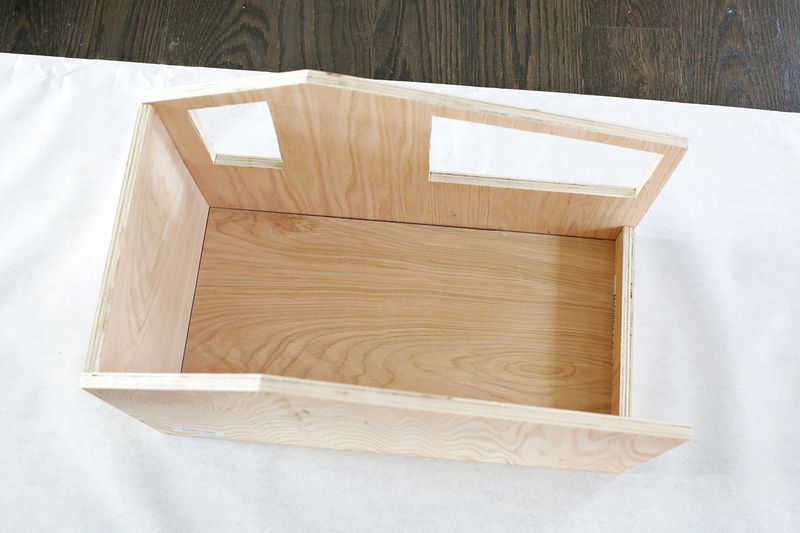 When my shapes were cut, I lined up all the pieces to make sure they fit together, and then used wood glue and clamps to glue the pieces together. Once the glue was dry, I nailed each piece into place. It’s a little hard to describe in words exactly how the parts fit together, but seeing the photos should make it self-explanatory. 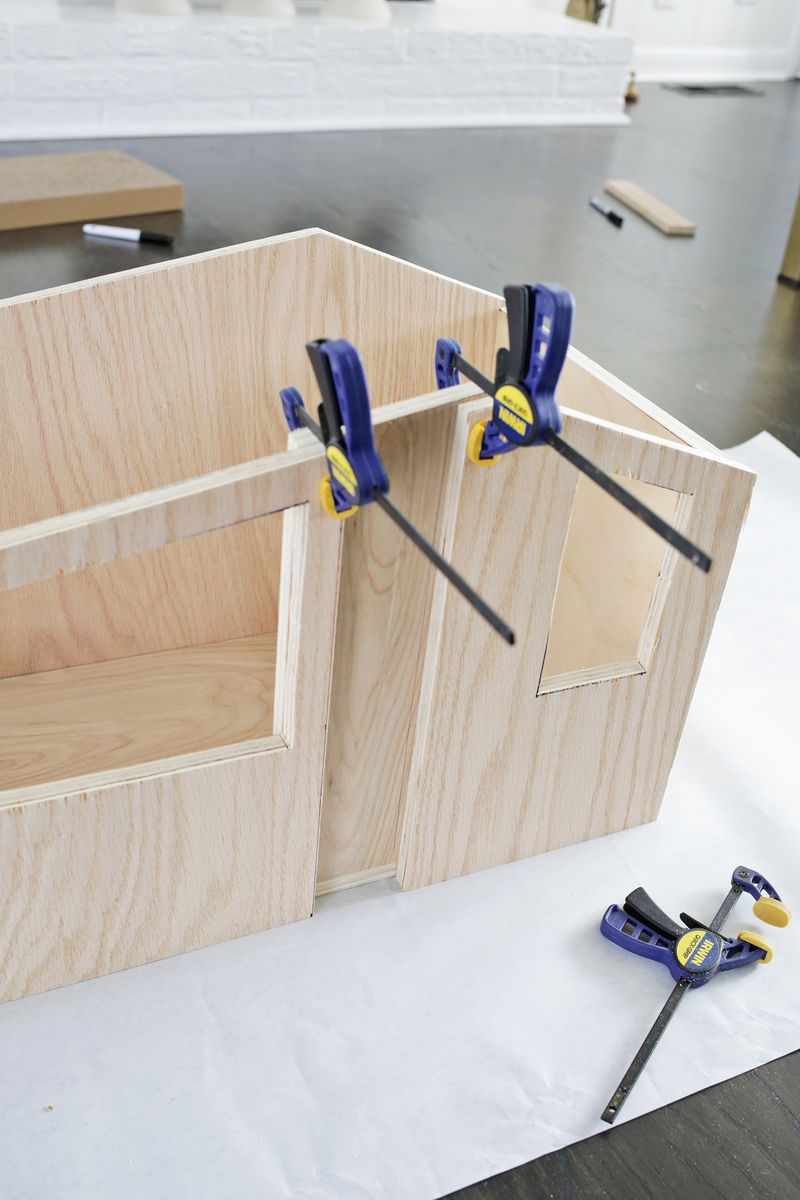 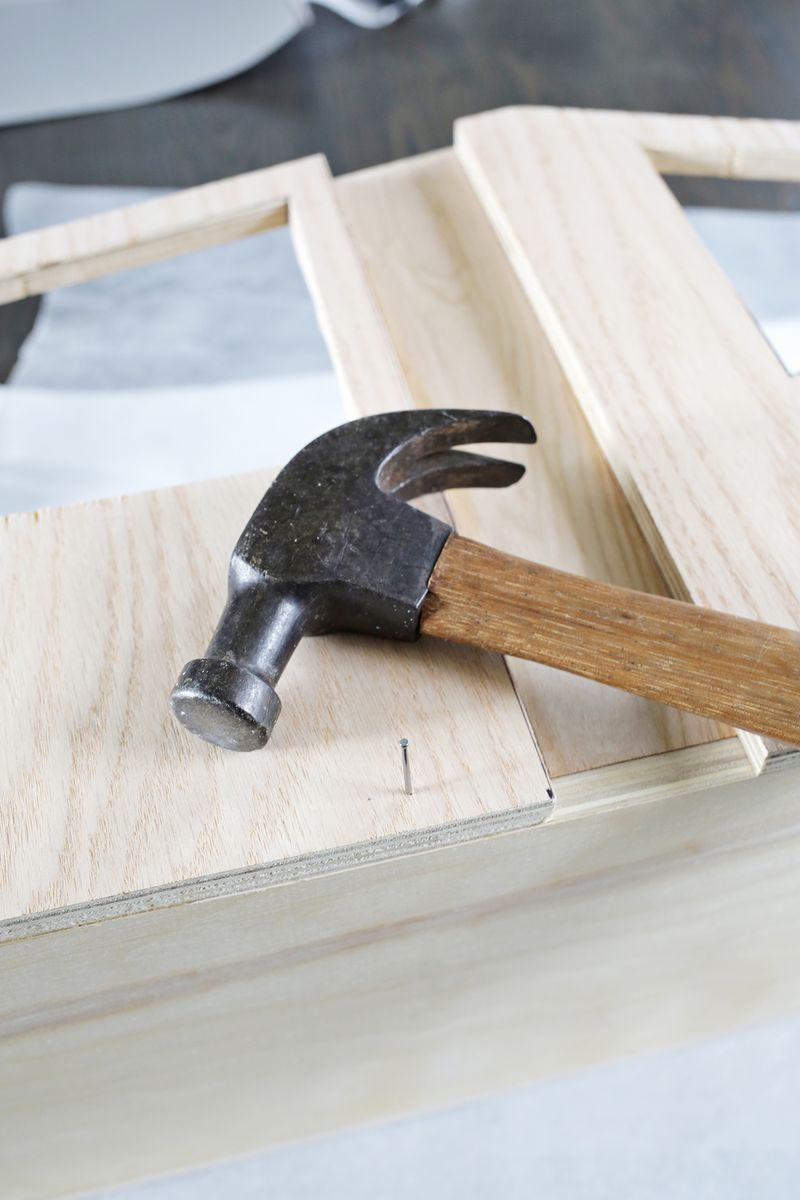 You can see that I added a recessed front door area simply by cutting out a strip from the front piece a few inches wide where the door should go and adding another piece behind it that was slightly wider than the opening. Pretty neat, huh?

When I went to cut the two pieces to make either sides of my roof, I realized that by making the roof “slightly asymmetrical”, I had apparently made the job of creating the roof a lot harder. If I had made the roof a right angle, I could have had the two boards join up quite nicely with one simply overlapping the other where they came together, but an odd angled roof sent me down to my miter saw to try and figure out what weird angle I had created to try and get them to meet up. I eventually got close enough, but it took a few tries! 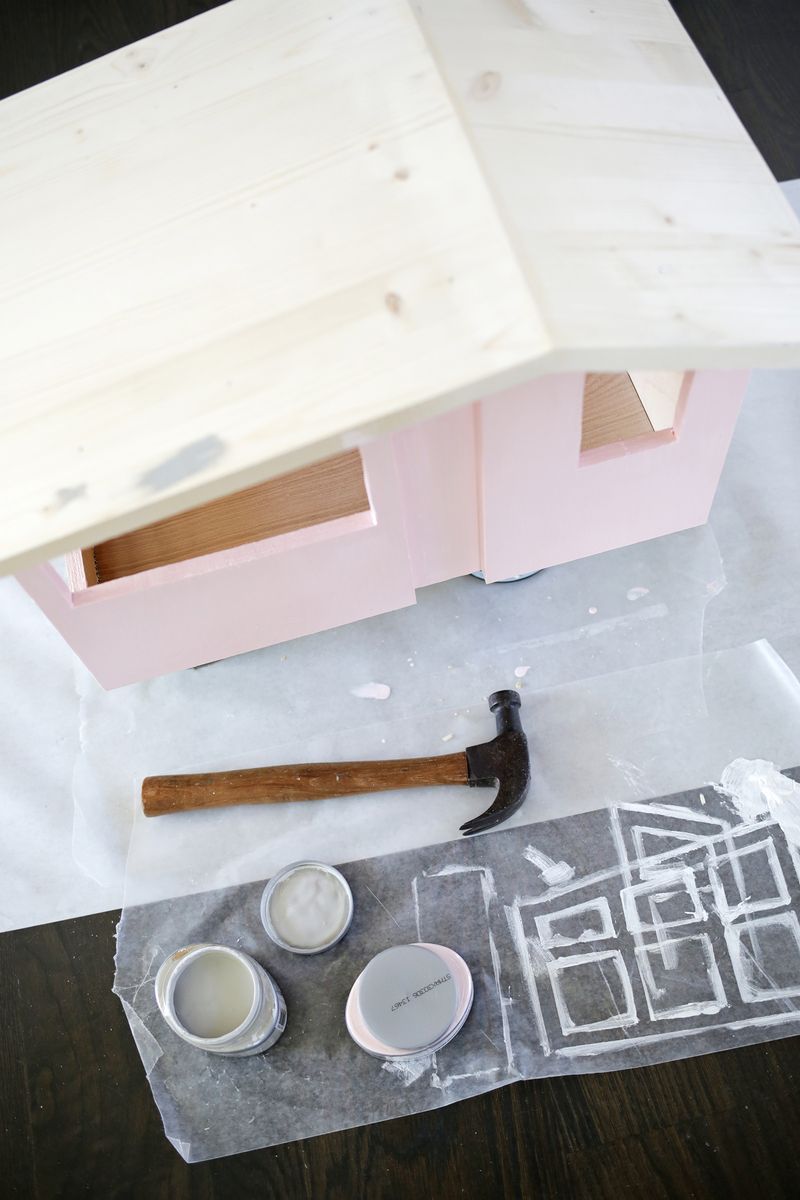 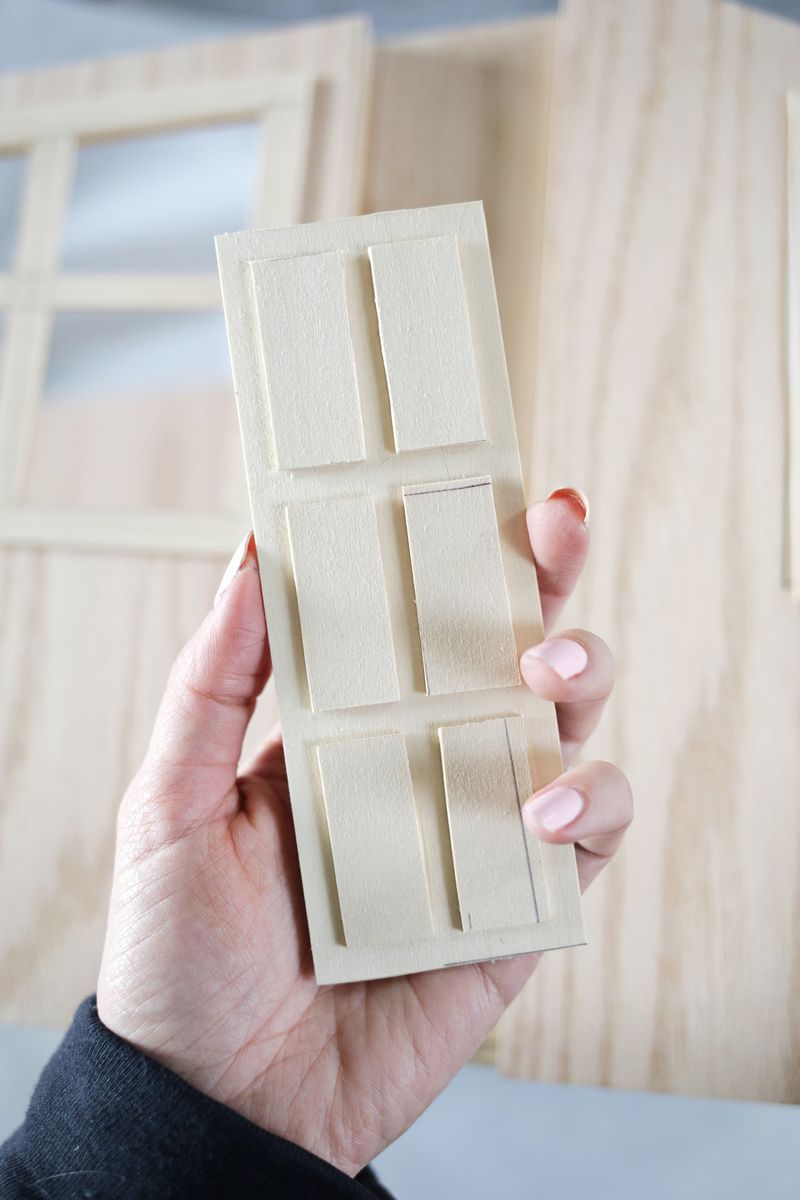 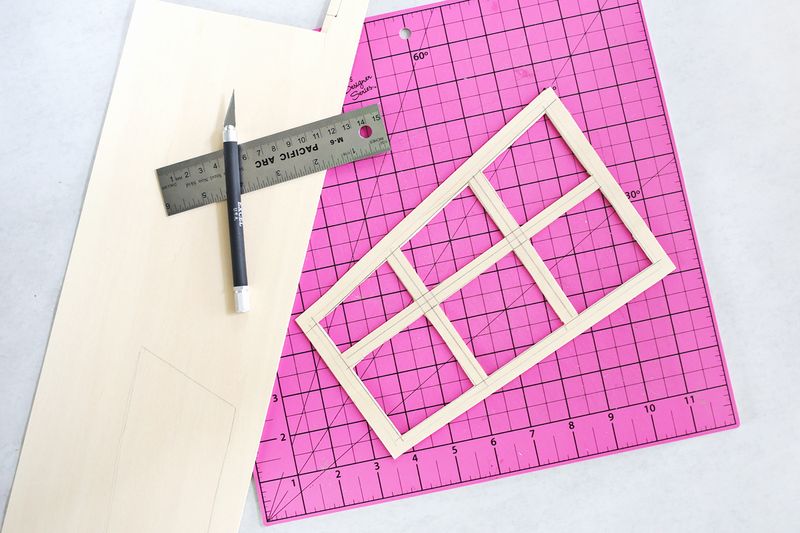 I wanted to add some removable wallpaper to the inside of the house to make it feel more finished, and I should have added the wallpaper before I nailed the roof on. Whoops. Made my job a lot harder later! Once my roof was glued and nailed on, it was time to paint! I chose Valspar Tea Rose and Sherwin Williams Dorian Gray for the paint colors and worked on making and painting some window frames and a door out of balsa wood in between coats. 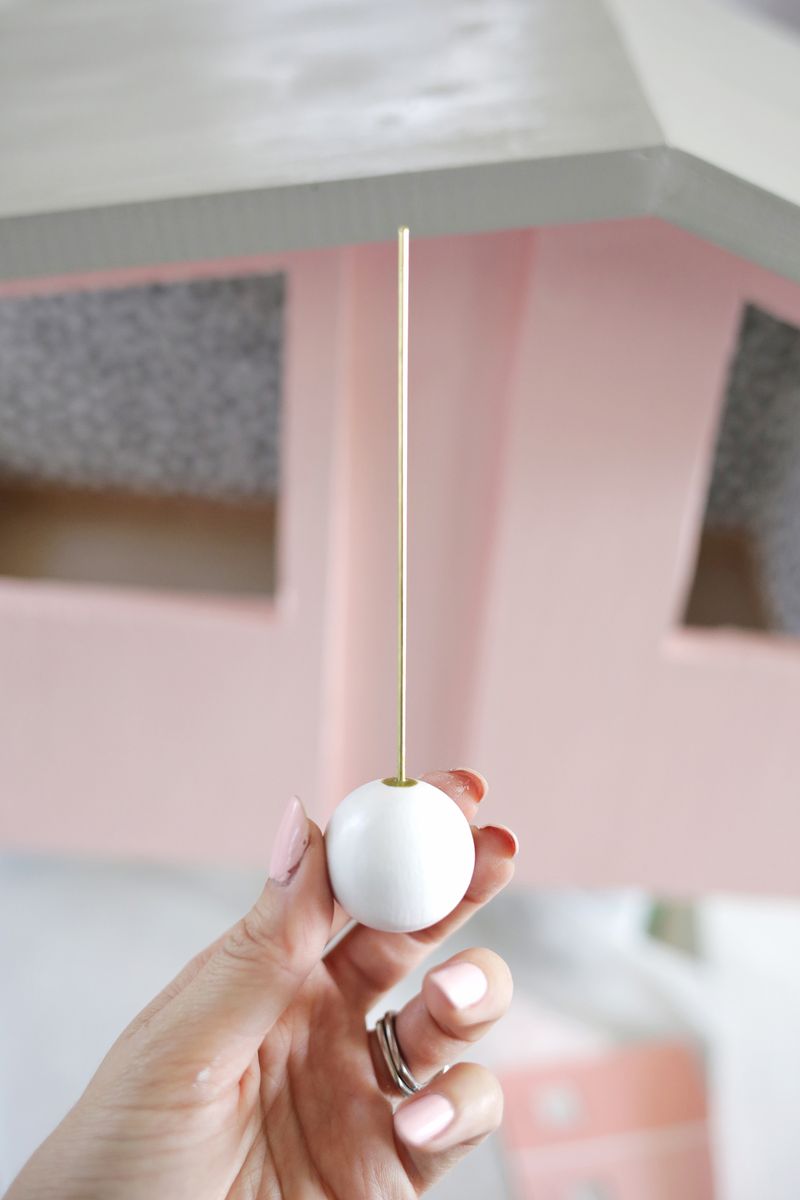 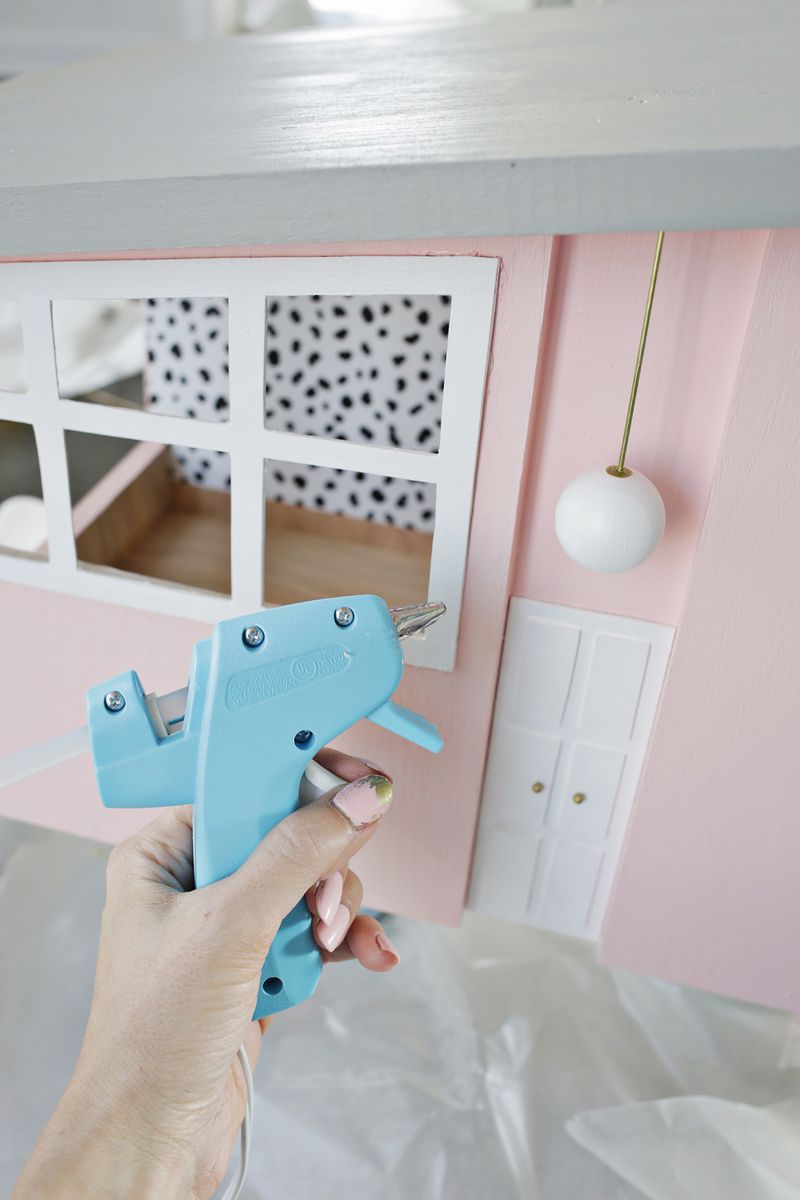 Once all the paint was dry, I glued the windows and door to the house and made a tiny globe light for the entryway out of a wooden craft ball and some metal wire? I just painted the ball and drilled a small hole into the ball and into the underside of the roof for mounting (a little super glue in each hole will keep it in place). Such a cute detail! I also painted some pin heads gold, cut the pins in half and hammered them into the front door for tiny doorknobs.

My house was almost done, but what’s a Palm Springs house without some giant agave plants flanking the front door, right? A few pieces of balsa wood later, I had the entryway of my dreams! 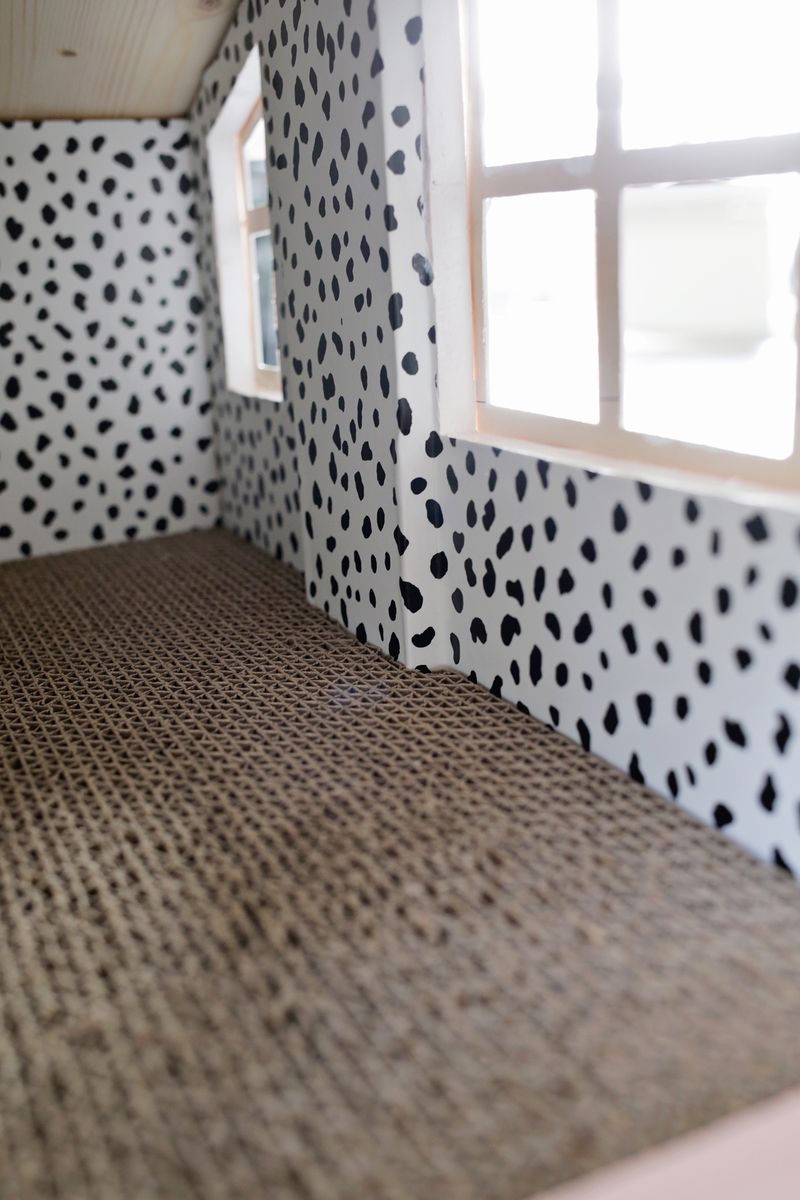 I measured and cut a little notch into the scratching pad (because of the recessed entryway), inserted the pad, and my scratch house was in business! Now, where’s Mac to test it? 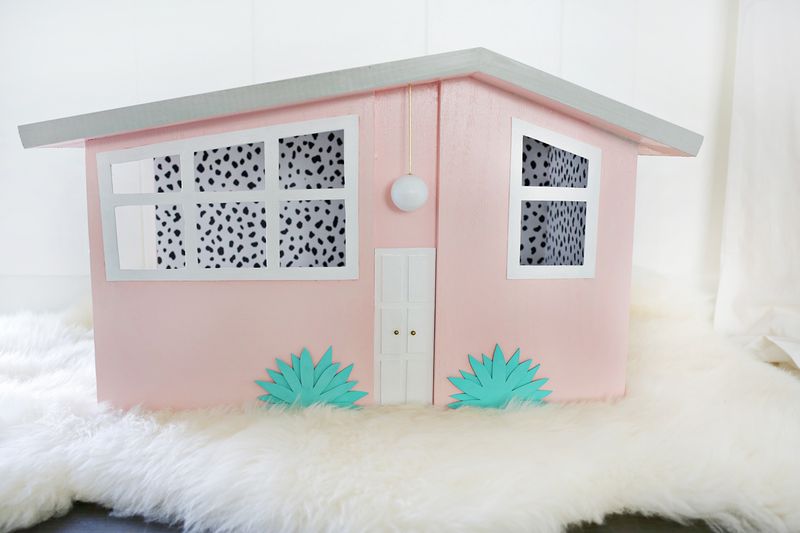 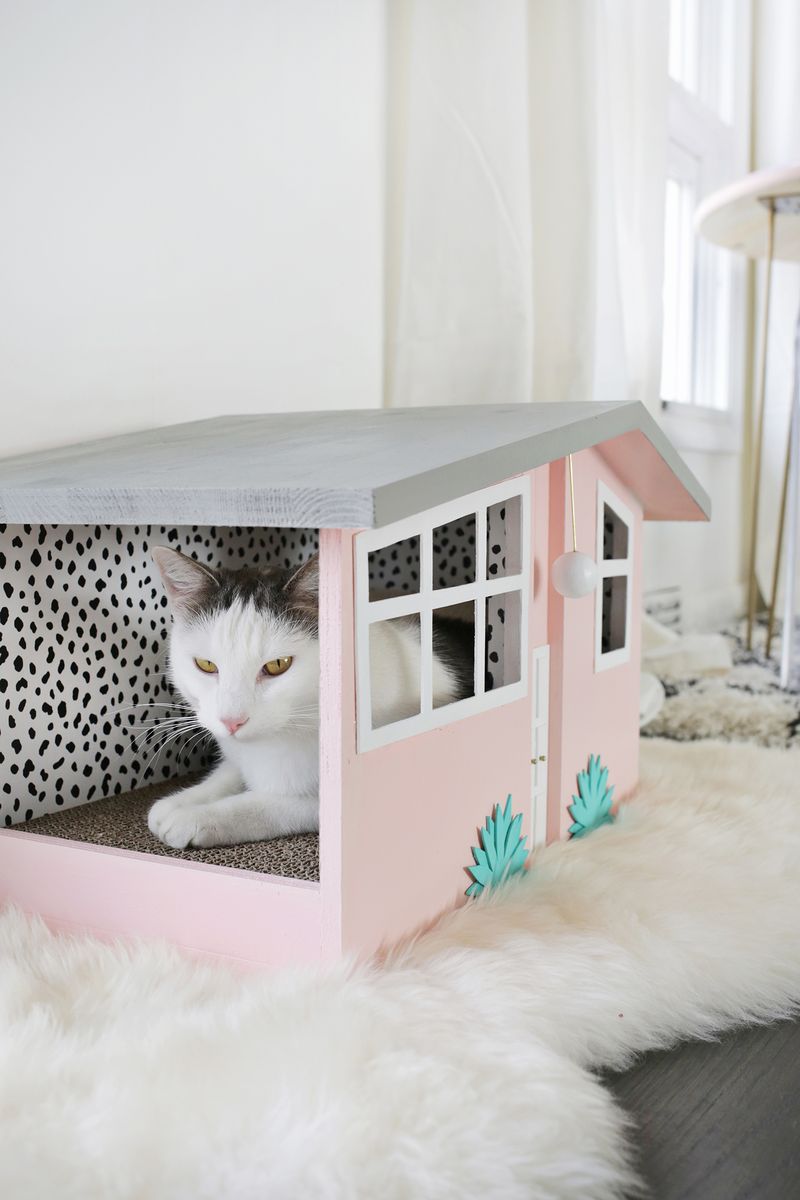 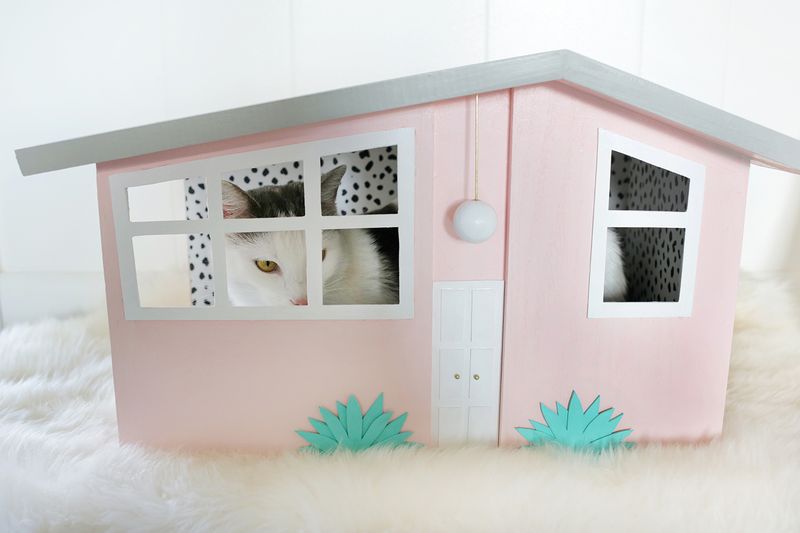 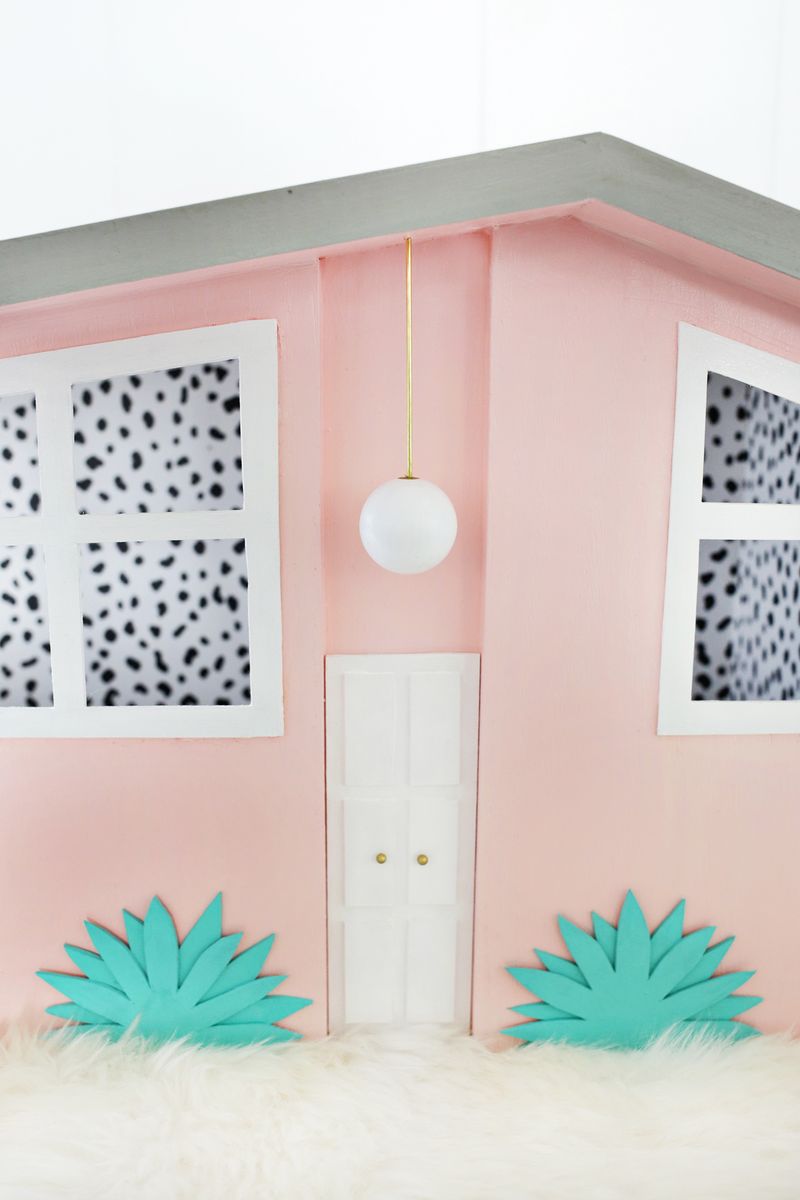 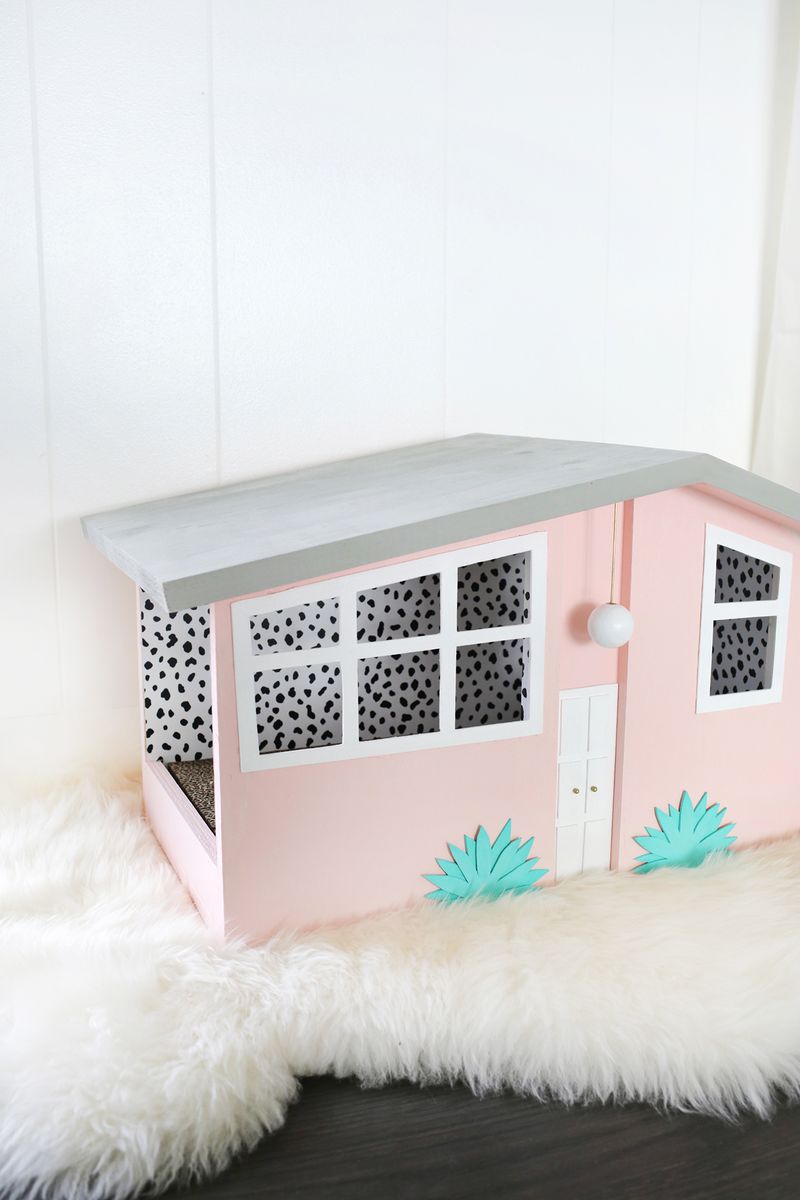 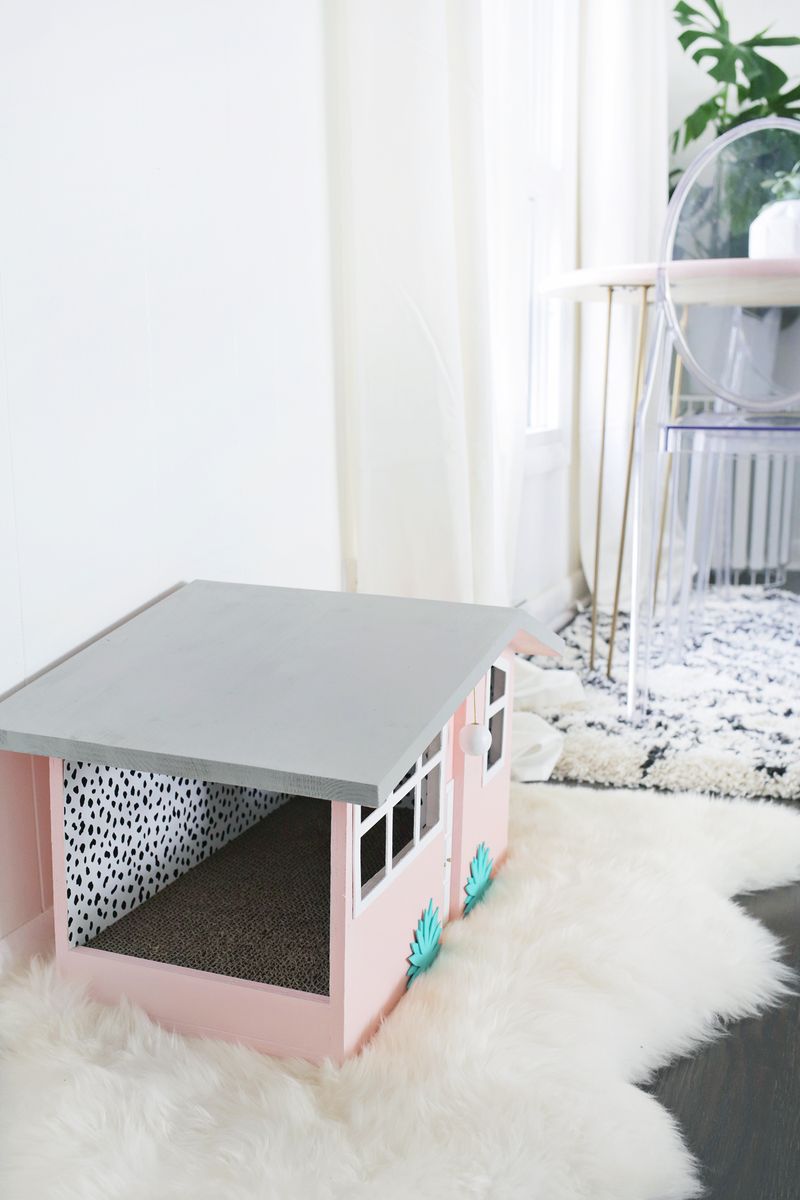 Can you even with this house!?! The pink exterior, the wallpaper inside, the hanging globe light and agave—I love it all! As you can see, Mac totally approves of the house, and it’s extra adorable when he takes naps in the house in between scratching sessions. He thinks he lives there. Obviously this is now totally something I don’t mind having out in the main living space for all to see. So I would consider this project a success for sure. My only problem is that Mac keeps complaining about the lack of a kidney-shaped pool in the back (to drink out of, of course). So I may have to start on an expansion soon! Would your little kitty like one of these? xo. Laura