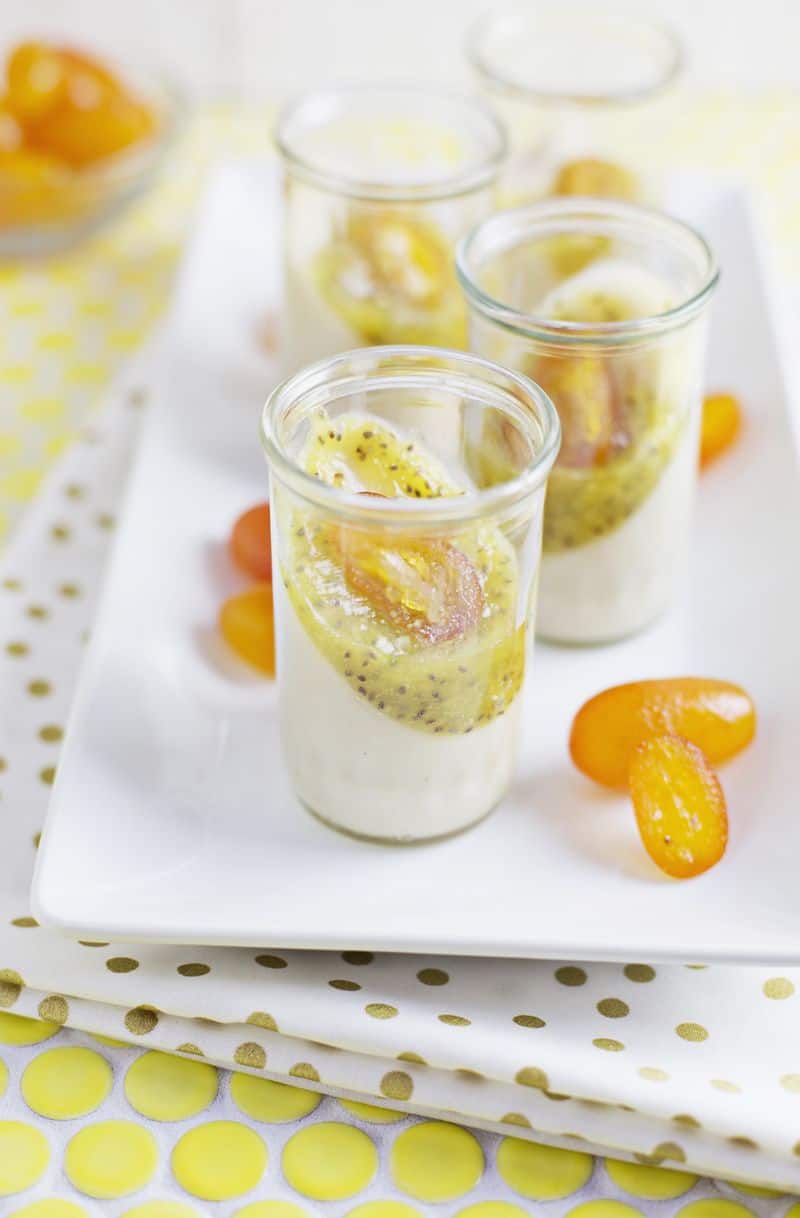 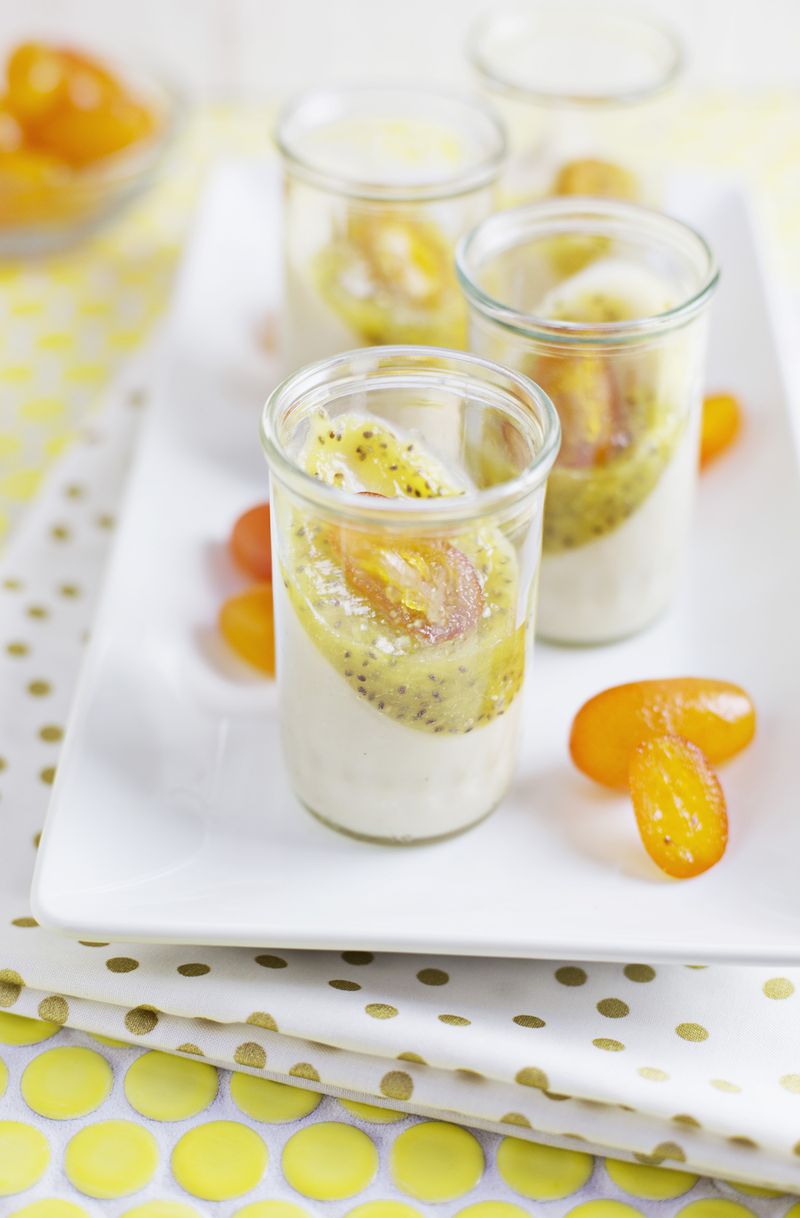 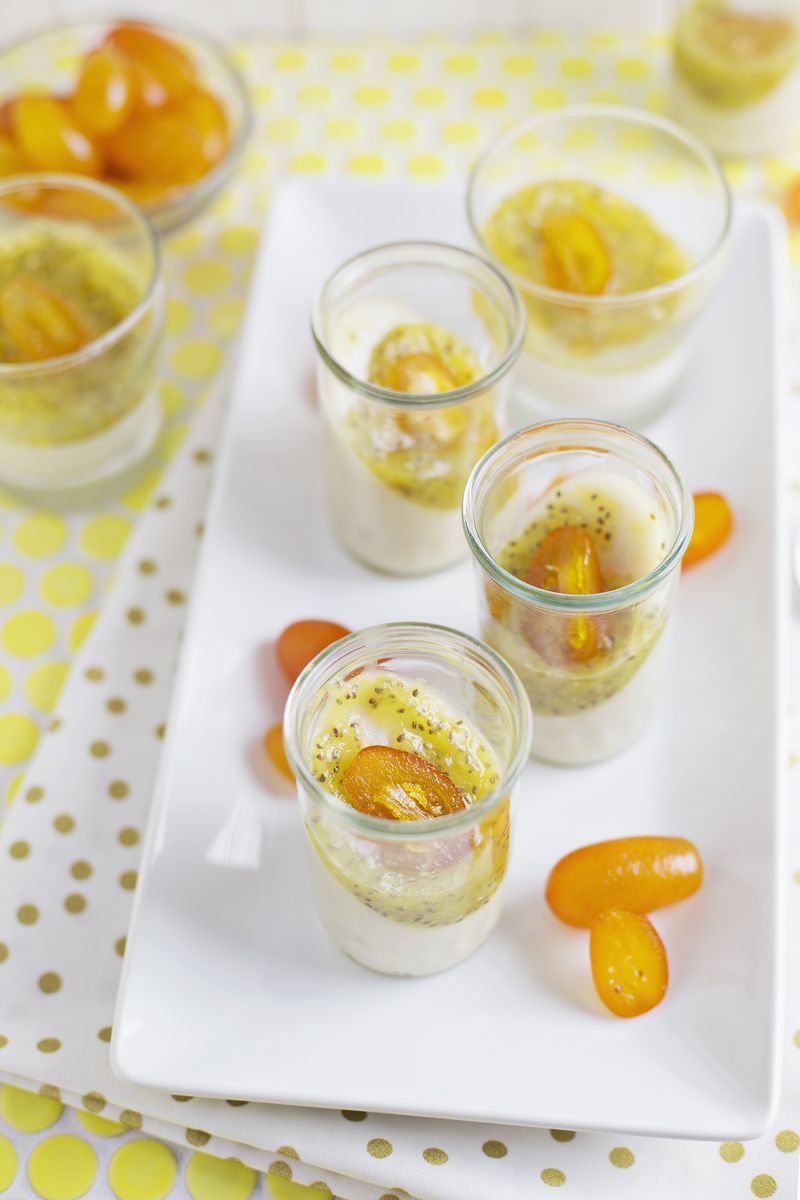 I am definitely a texture person when it comes to food. I love all manner of puddings, custards, cream pies, etc. If I ever lose my teeth, I’ll be fine. It’ll be all green smoothies and chocolate pudding from then on out.

Just kidding. And also, WHAT MADE MY TEETH FALL OUT?!?! I’ve actually had that exact nightmare before.

Anyway, let’s focus. We’ve got something very important to talk about today and that’s panna cotta. For the most part I think of panna cotta in much the same way I think of creme brûlée or pots de creme: namely, a fancy restaurant version of pudding.

Of course, they are not all the same. Panna cotta is more often made with gelatin while those other two I listed are baked custards. But what they all have in common is a silky, smooth texture and the ability to make them well ahead of when you plan to serve them.

So basically, they are a win win in my book. 🙂 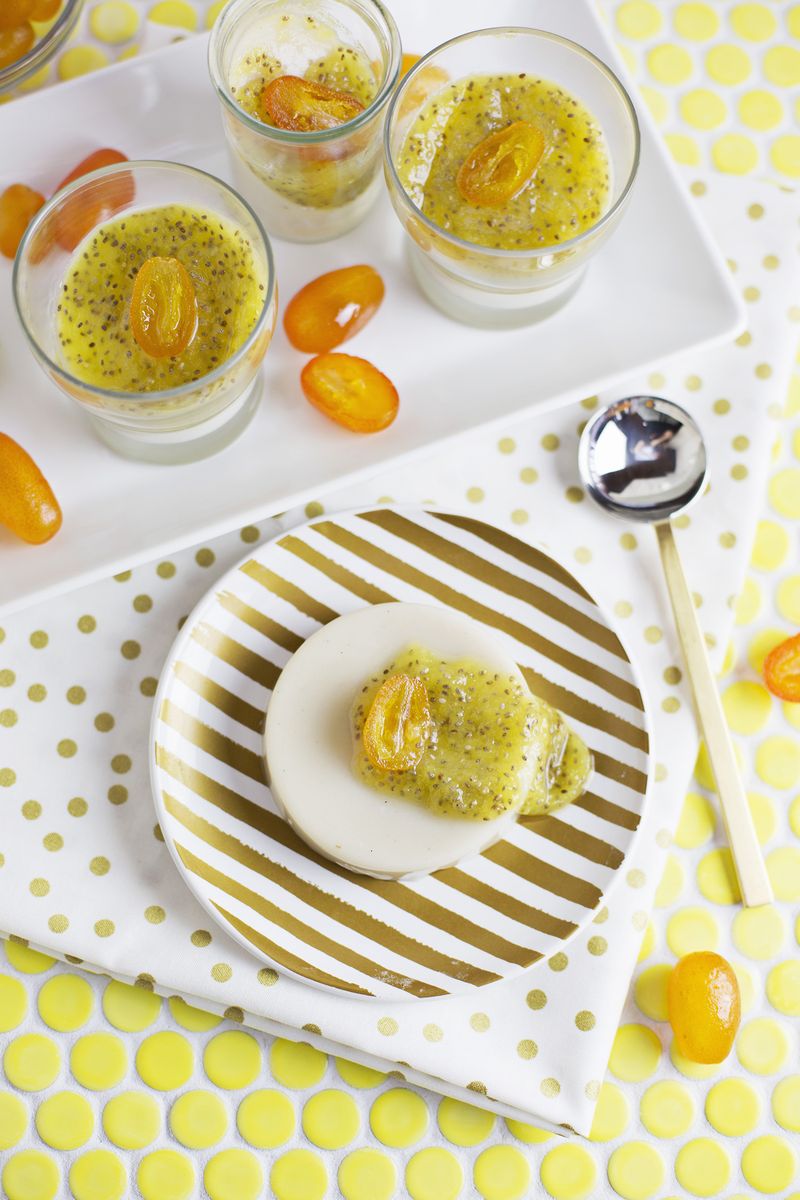 I recently got a little bit obsessed with making panna cotta at home. It’s not a difficult dish to make; it’s actually super easy. But I also wanted to learn to make a vegan version. And I tried out a bunch of different toppings during those trial and error sessions.

The result, other than me eating a bunch of panna cotta, is I’ve got some tips for you no matter which version you plan to make, and I’ve got a really fun, tropical topping suggestion as well. 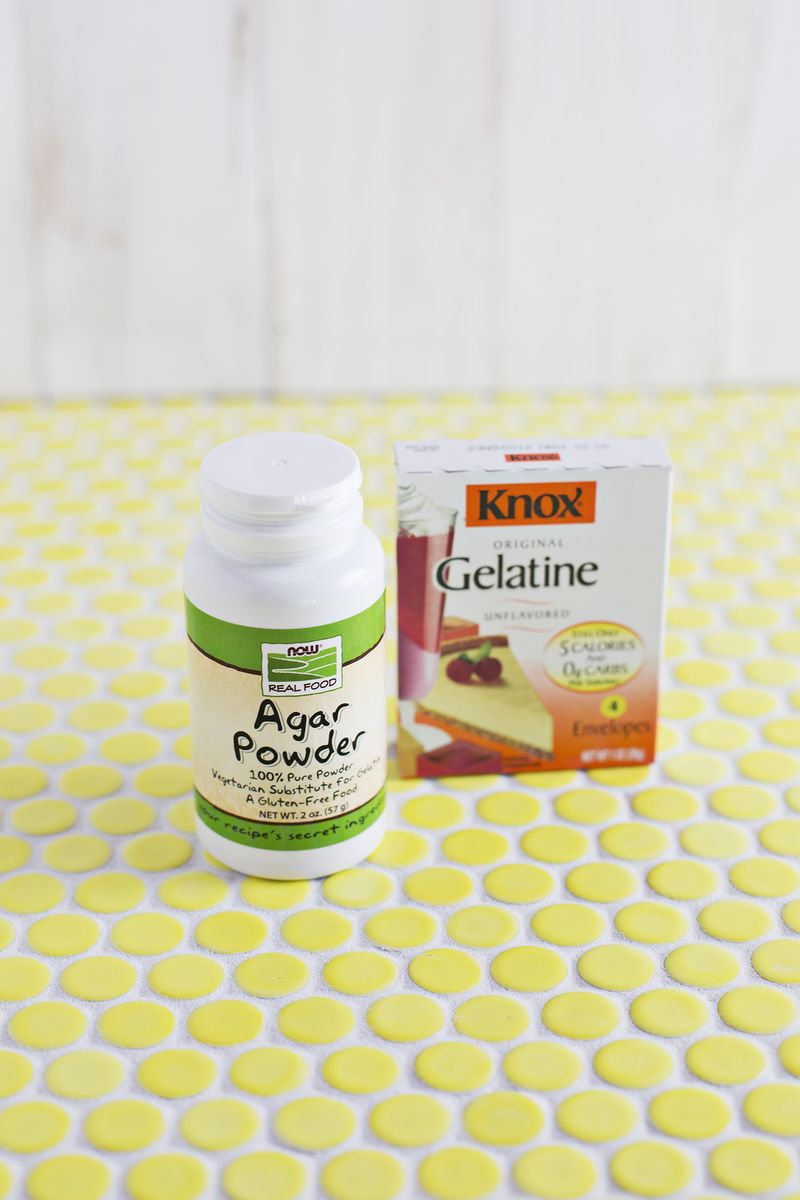 *You can use heavy whipping cream for all 2 cups here for a truly decadent dessert. But I’ve found that this also works very well with a mix of half and half and heavy cream, or all half and half, or even all whole milk. It just depends on how rich you it to be.

Scrape the seeds from inside the vanilla bean with a tip of a knife. Add these to a bowl with the sugar. Use your clean hands to blend together so the vanilla seeds get mixed into all the sugar.

I find that this works better than simply whisking the seeds in after scraping as they sometimes tend to clump together.

In a medium to large size bowl, add the cold water (not hot, this will make your gelatin clump) and sprinkle the gelatin over the top. Set aside.

In a medium sized pot, combine the cream, sugar, and vanilla seeds (which are already mixed into the sugar at this point). Heat the mixture over medium to high heat and whisk just until the sugar dissolves.

The mixture should be quite warm, but not so hot that it is in danger of boiling. Pour the warm mixture over the gelatin and whisk together. Now pour into your ramekins or serving glasses and refrigerate for at least four hours or up to three days. 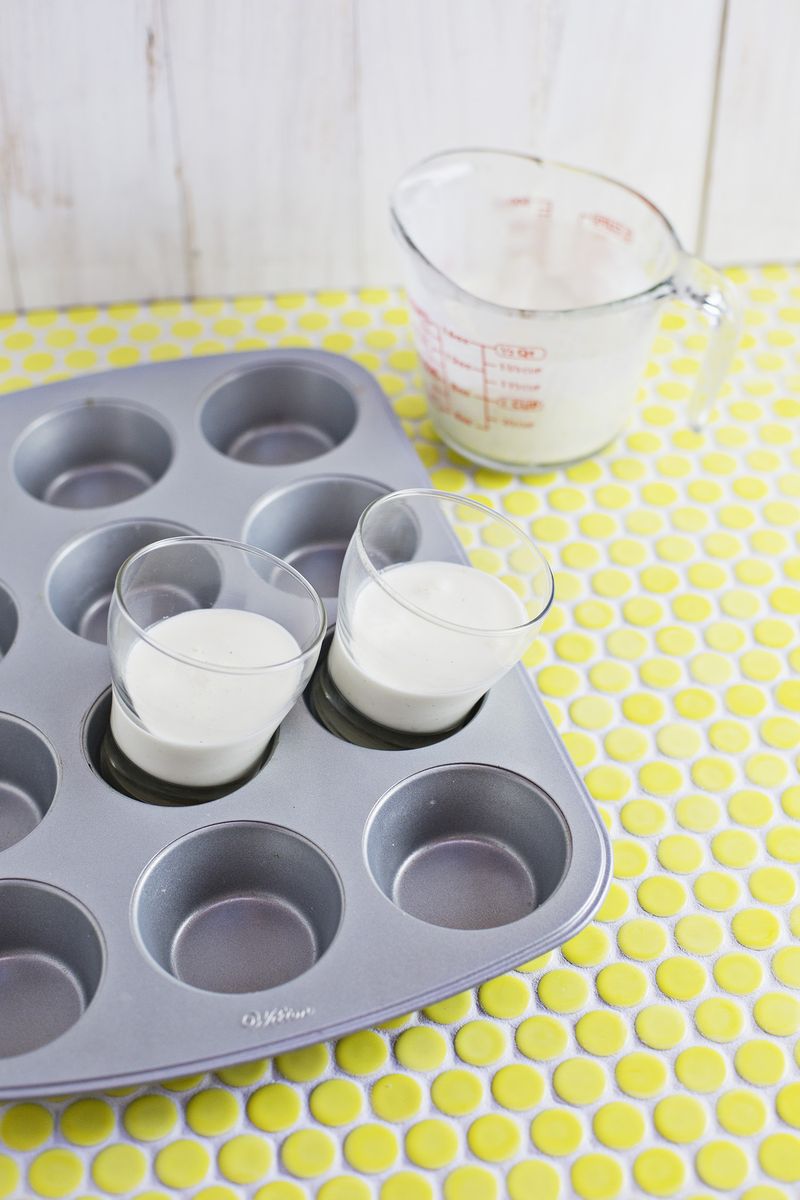 The ingredient list looks very similar, but the cooking method is a little different as it’s important to cook the agar powder much more than you would gelatin. If you don’t, it will not set up and you’ll be left with a weird, gloopy liquid. Eww.

Start by scraping the seeds from the vanilla bean into a small bowl with the sugar. Use your clean hands to blend them together so no big masses of vanilla seeds are left.

In a medium to large pot, combine the cashew milk and sugar with the vanilla seeds. Cook over medium/high heat, whisking to dissolve the sugar.

While that is heating up, dissolve the agar powder in a small bowl with 2 tablespoons hot water. You want the water very hot here so the agar powder will dissolve. Now add this mixture to the pot with your cashew milk.

Continue to cook over medium/high heat for another 5 minutes. The mixture will begin to thicken slightly and easily coat your spoon.

Pour into your ramekins or serving glasses and refrigerate for at least 4 hours or up to three days. If you want to create a fun slanted look to your puddings, you can place your glass slanted in a muffin pan before pouring, the mixture will sit up in this position. 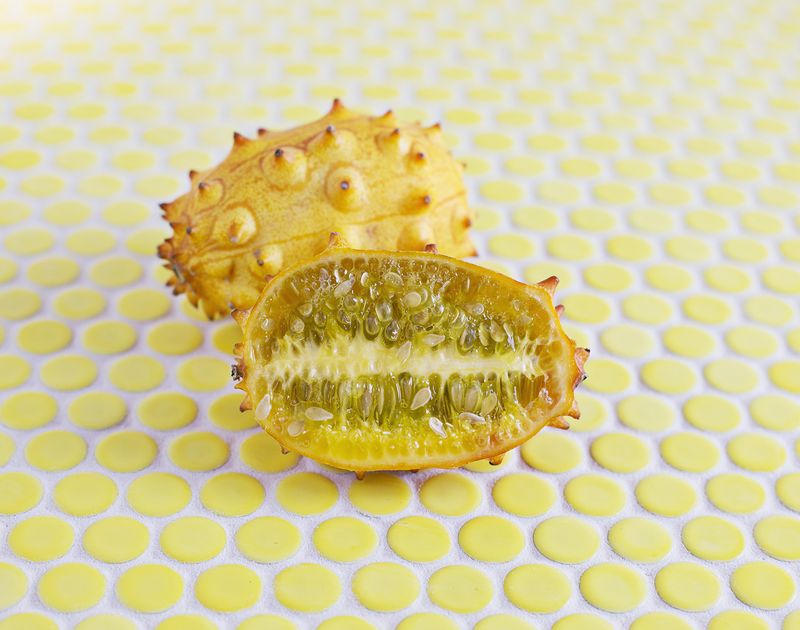 As I mentioned, I made quite a few different toppings while I was testing out each of the panna cotta recipes. One of the toppings involved this fruit you see in the photo above. It’s called cuke-asaurus, or horned melon.

I randomly saw these in my grocery store and immediately wanted to try it because I’d never eaten one before. Turns out the inside is sort of like a cucumber meets pomegranate. It’s filled with seeds (that are quite bland, but edible) and a sort of greenish gel that surrounds the seeds.

I made a jelly from the gel, which took a lot of effort as it involved straining out the seeds. And in the end, I just didn’t really like the taste of this fruit. And given that it’s actually quite a bit of work to get any fruit out of it in the first place, I don’t think I’ll be buying these again.

Random story, I know. Just thought I’d share. Have any of you guys tried one of these before? Thoughts?

My favorite topping for these turned out to be a  pineapple and chia glaze. It’s very similar to my chia jam recipe, but not quite as thick in consistency.

Pineapple glaze, can easily top 8-9 panna cotta servings, so feel free to cut in half if you need.

2 cups fresh pineapple, cubed (about 10 oz. or one small pineapple once the top, sides, and core are removed)
1/4 cup sugar
1/2 teaspoon vanilla extract (or if you have left over vanilla beans, that could work well too)
2 teaspoons chia seeds

In a small pot, combine the cubed pineapple, sugar, and vanilla extract. Cook over medium heat, stirring so the sugar doesn’t stick to the pot for 4-5 minutes until the pineapple releases lots of its juices and becomes soft enough to cut with the side of a fork easily.

Use an immersion blender or transfer to a blender to puree. Place back in the pot but reduce the heat to low and add in the chia seeds. Cook for another 5-6 minutes until the mixture begins to thicken. Then allow to cool before you use, it will thicken up more as it cools. 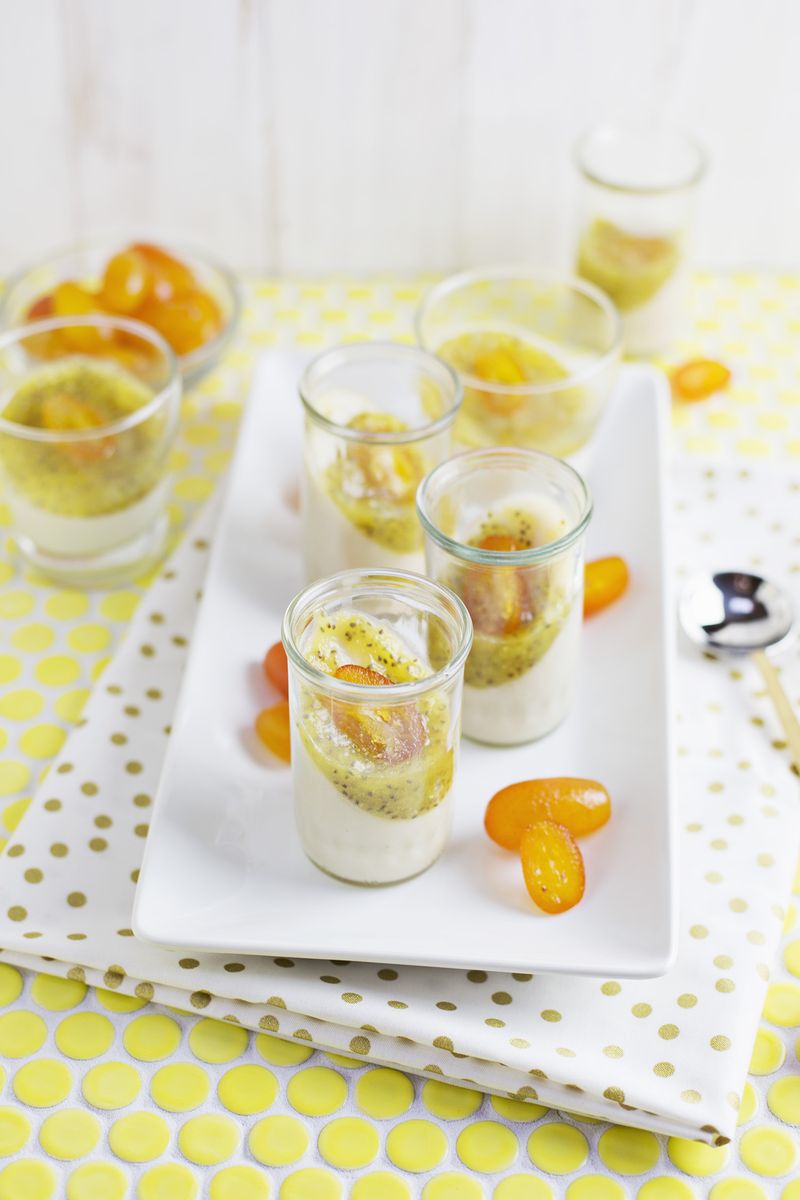 If you used ramekins or small bowls for your panna cotta and you want to unmold them before serving, simply run a knife along the inside edges and then submerge the sides (but not the top) of the dish in hot water.

Place a serving dish over the top and flip over. You may need to give it a few taps, but it should come out pretty easily.

If you don’t want to bother with unmolding, you can simply serve in small juice or wine glasses, or even leave them in the ramekins. Totally up to you. 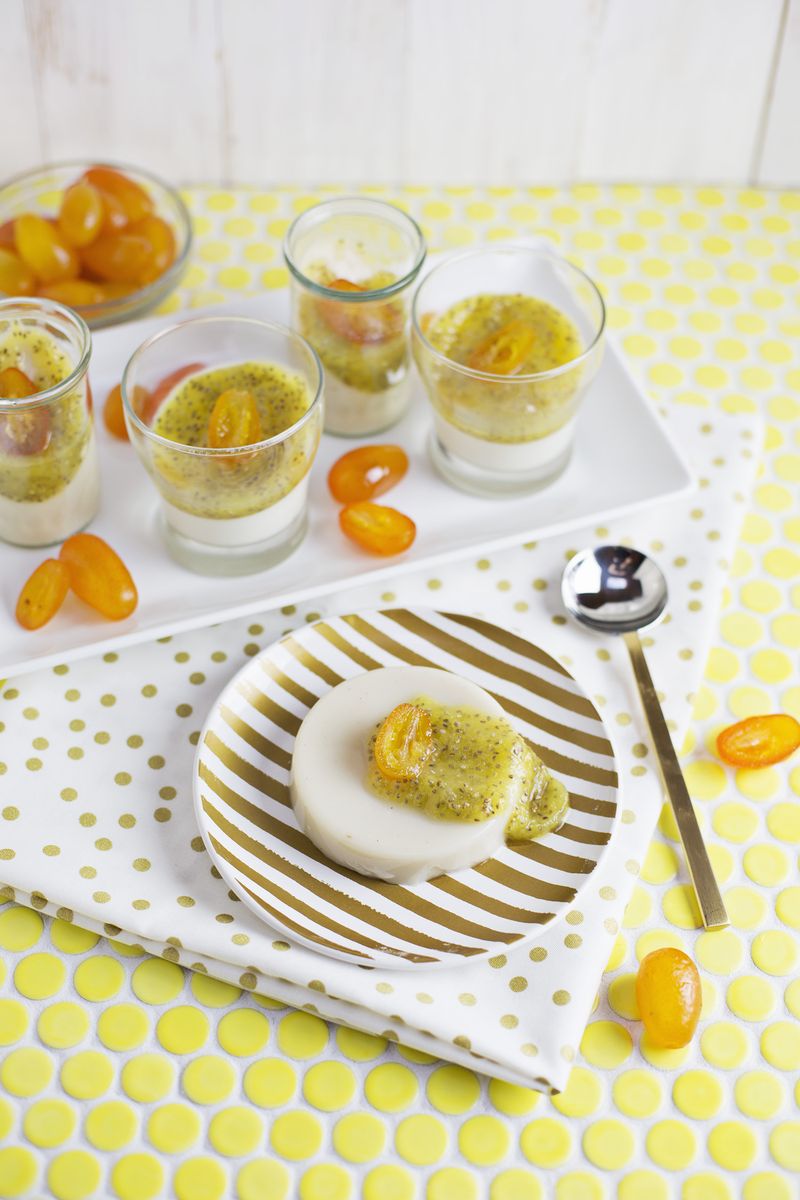 Top with the pineapple glaze, and you’re good to go. The same day I bought those horned melons I also saw a small container or candied kumquats. I know! It was an adventurous grocery trip. I must have been in a mood.

At any rate, I still had some, so I decided to halve them and serve over the top of this batch just because I thought it looked pretty.

This is totally optional though. If you don’t have candied kumquats but want to add a little something, try a maraschino cherry—then it’s almost a Pina Colada panna cotta. 🙂 Enjoy! xo. Emma

Thanks for clarifying! Guess it’s what happens when we do not read the full page! 🙂

I was just going to mention this. I’m vegan and gelatin is not vegan or vegetarian friendly. Gelatin is made by grounded animal skin + bones.

About the horned melon–not my favorite, but the scoop-and-serve method seems to work well, just using it as a topping rather than trying to fancy it up. Years back, I first found some at the grocery store and my husband and I made a funny video on “How to Eat a Horned Melon”, which basically involved us scooping the insides and tipping the contents of the melon half into our mouths. Good times. 🙂

LOVE the Cuke-asaurus comment! I will now know this fruit by only this name ☺. I am glad you clarified that those are candied kumquats as I was afraid–very afraid–that they were yellow tomatoes.

This looks delicious! I love Panna Cotta and I’ll probably try making both versions: dairy fee for all the vegans in my family and the heavy cream one for me!

Totally irrelevant, I know, but is it just me, or does cuke-asaurus sound like a dinosaur? 😀

These look so delicious, and I love the presentation! Absolutely perfect for a Spring and Summer get together!

1. That looks delish
2. I definitely thought they were garnished with grape tomatoes and I was scared for a moment ?

Pannacotta is one of my favourite desserts! I love it as a white chocolate pannacotta with a raspberry sauce, but pineapple and chia sounds amazing too! I love anything ‘tropical’ so no doubt I’ll be trying this recipe too!
Also, I love how you shared a vegan version too – although we aren’t vegan, my mum is dairy intolerant so we tend to look for a lot of vegan recipes for her! Yay!
xo April | April Everyday

Candied Kumquats!!!!! Must try to find that! I love Kumquats so much……it’s become weird! I don’t remember ever having panna cotta before but it sounds pretty good (I mean you can’t go wrong with anything that contains heavy cream……clearly I am neither vegan nor vegetarian).

These look SO good! They are going on my list of must try <3

Awe, I see! I did notice that but once I saw the gelatin, as a vegan, my eyes have a habit of focusing in on that, lol Thanks! 🙂

Hi Sydney! You’re right. There’s a vegan option a little further down in the post though. 🙂 -Jacki

Hi Laurali! There’s a vegan option that uses agar powder instead of gelatin if you keep scrolling down. 🙂 -Jacki

I just checked out Gelatine also, for all the vegans out there.

By definition it says this:
“a nearly transparent, faintly yellow, odorless, and almost tasteless glutinous substance obtained by boiling in water the ligaments, bones, skin, etc., of animals, and forming the basis of jellies, glues, and the like.” This is not vegan-friendly whatsoever. This isn’t even vegetarian.

Gelatin is NOT vegan-friendly! It’s made from animals. The box said Gelatine though, so I’ll have to look into it and see if that’s some kind of substitute perhaps. Maybe clarify??

was going to say the same thing! i’ve been a vegetarian forever, but it’s the one thing i’ll usually ignore, because i don’t eat it often and in small amounts.

But isn’t gelatin not vegan or vegetarian friendly?

ok CUKE-ASAURUS!?!?!?! That steals the show. Now all I can picture is a cucumber with teeth and tiny short arms. RAWRRR!!!!