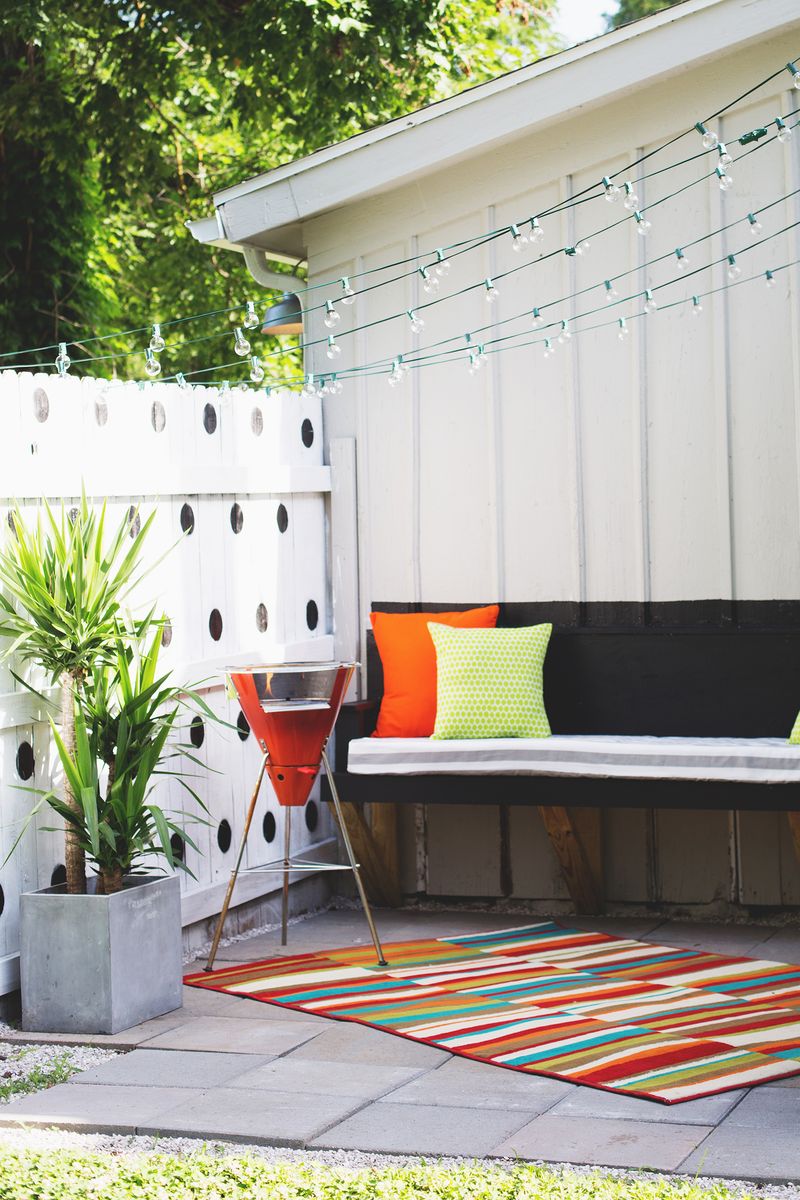 I love how this little alcove turned out. One of Elsie's major strengths is having a vision for making something beautiful most others wouldn't even consider as an option. As you can see, this space was perfect for a great hang spot. The first thing I did with the space is lay down some paving stones. I'm going to tell you briefly how I did it and share some tips I picked up on the way; it was my first time doing it! Since this was my first time, it may be more about what NOT to do. Let's see. 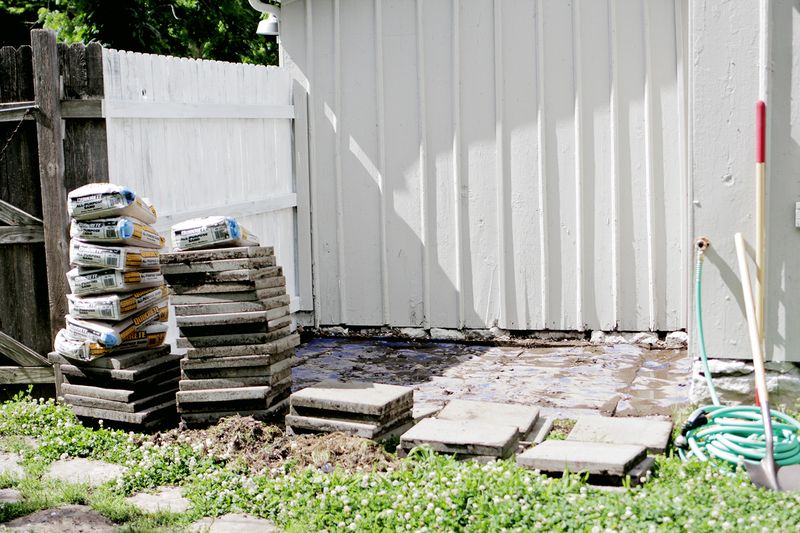 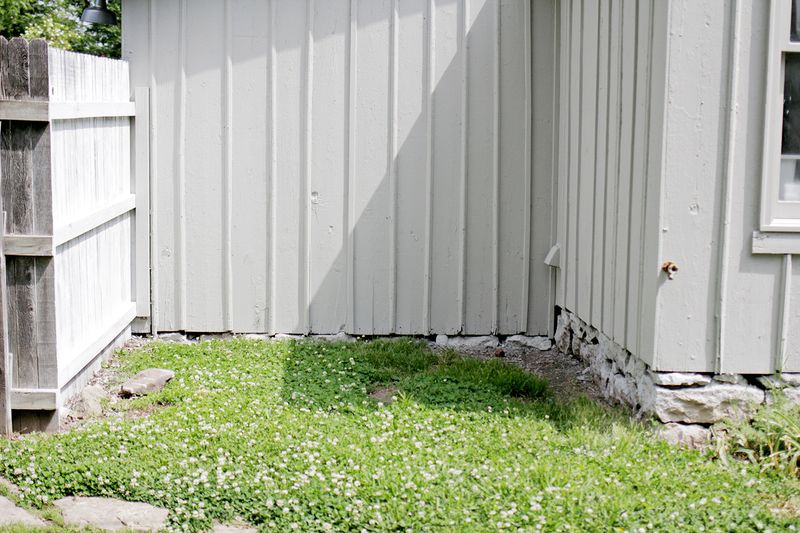 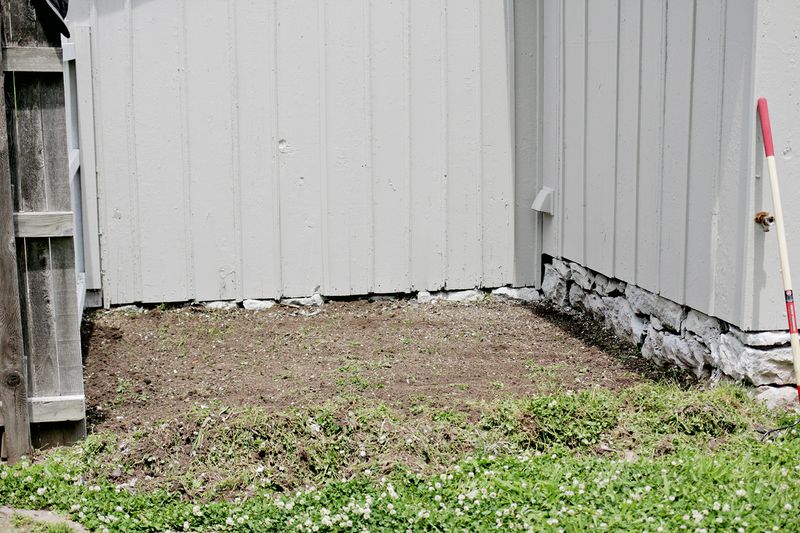 Step One: The first thing I did was prepare the ground. It had some bigger rocks and junk that I removed. I probably could have just poured the sand on top of the grass and went from there, but that would have been way too easy! I took my shovel and hacked all the grass off, then laid a tarp down since I didn't want grass or weeds growing back up through cracks. This is a good time to measure your space so you'll know how much material to purchase.

Step Two: This is where I really got my workout. I initially just laid out all of the stones right on top of the tarp. I thought I had leveled the ground enough and it would be fine. I was wrong. The tiles were all disheveled and wonky. I almost just left it, but it was so bad I couldn't stop thinking about it. Plus with the tarp, they probably wouldn't have settled much more, so it would have been eternally terrible.  I went and got several bags of leveling sand, removed all of the tiles, and started over. Above is how I laid out the tiles, but before I used sand. 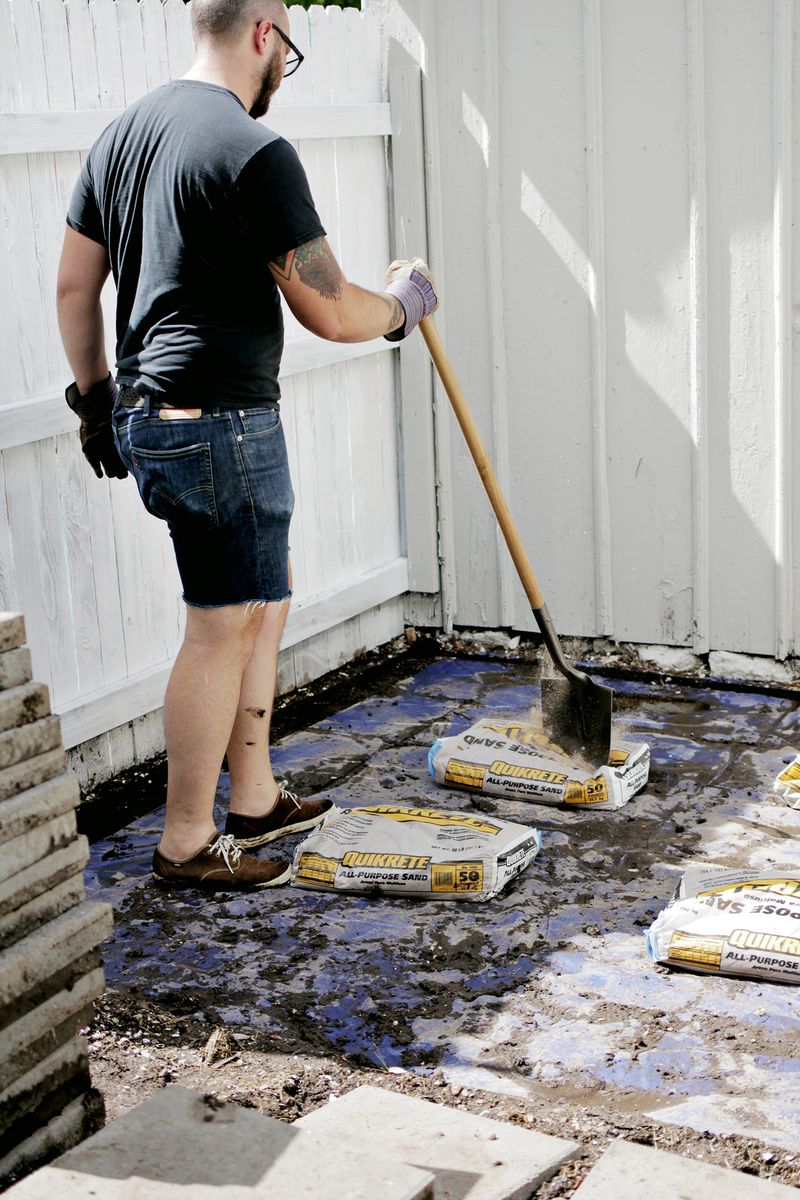 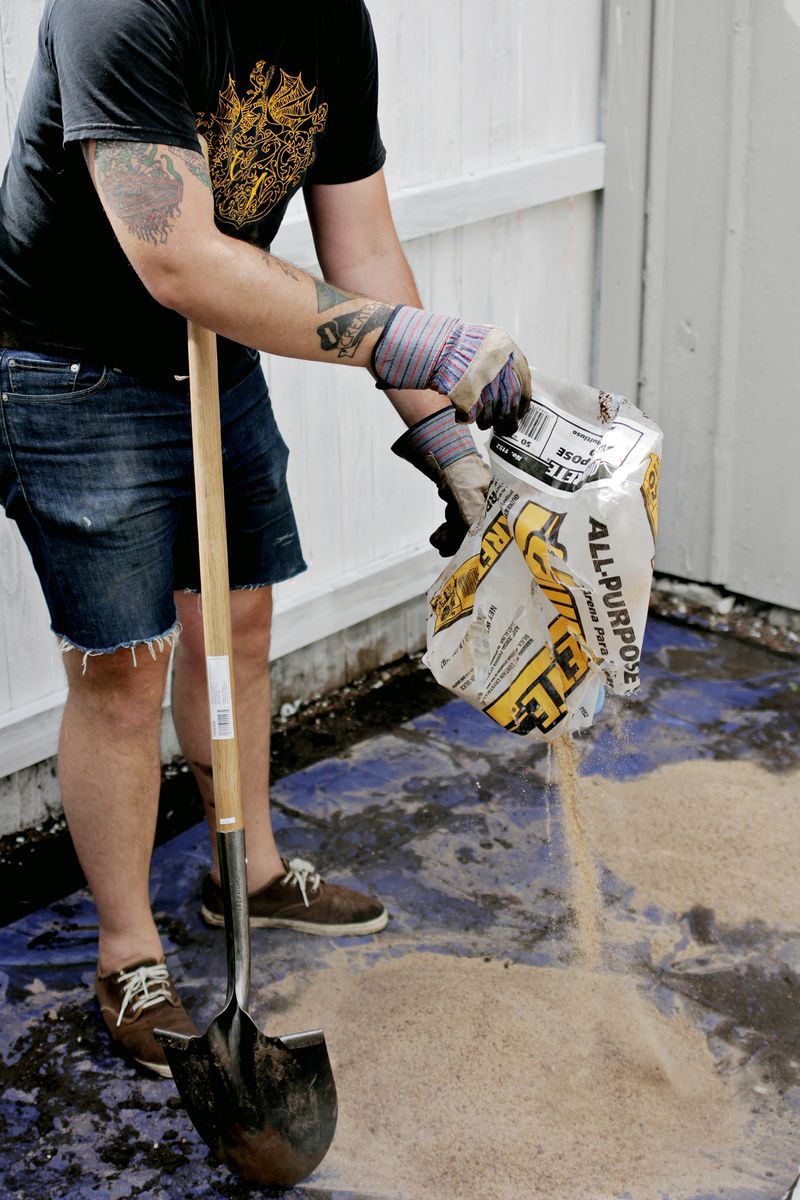 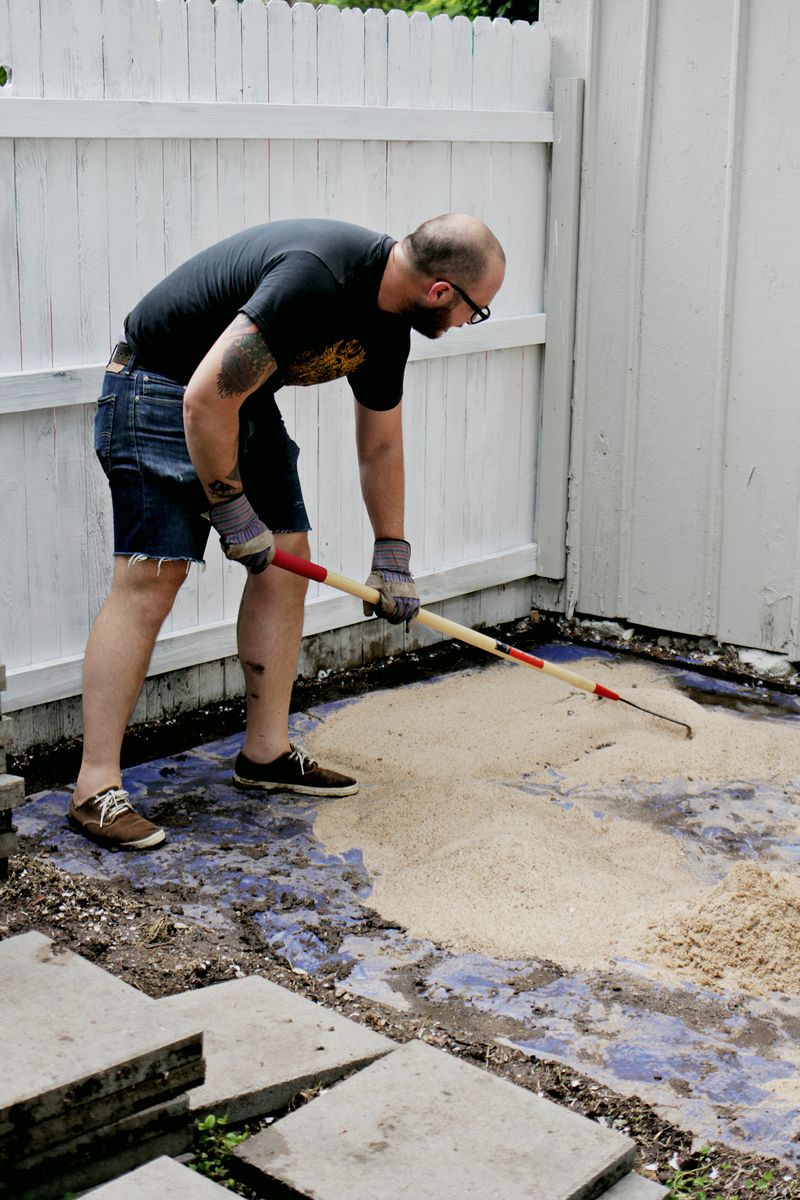 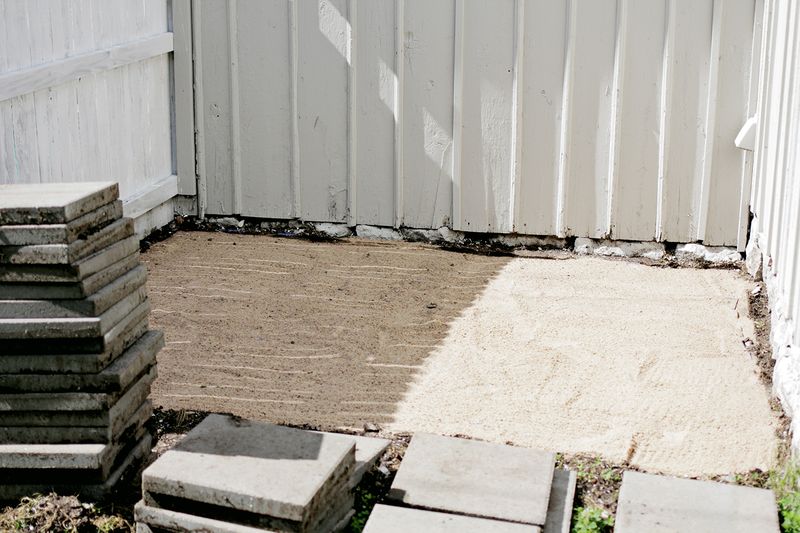 Step Three: Lay down leveling sand, preferably before you put down the tiles, unless you really like putting down and picking up heavy things.The amount of bags you use depends on your space. You want around half an inch of coverage. There is info on how many bags you'll need on the bags, so just give those a gander when you're out buying supplies. The great thing about the leveling sand is that it anchors the tiles in place, which makes for a stable walking surface, which is always nice!

To lay out the sand, I just threw the bags in a couple of general areas, broke them open with the shovel, then raked it out as level as I could. Once the sand was nice and level, I laid the stones down, again. I just tried to keep the first row as straight as possible (the stones nice and snuggled close together), and the rest of the rows stayed pretty straight. Of course since I did the right thing and laid down the leveling sand, the stones were 87% more straight and stable. To top it off, I poured some pea stone around the perimeter.

I'm so happy that I redid the stone with the sand. It really didn't take much time to remove them and put them back, and it was worth it. One more no-brainer hint: the kind people at Lowe's (or wherever you go to buy your supplies) will help you carry and load this many stones, probably with a forklift. I had a cart filled with close to 70 12" paving stones, and boy, did I feel a bit ridiculous as I struggled to get them to the register. Oh well, I got a workout out of the deal.

Leave your questions, tips, hints, or landscaping stories in the comment section below! 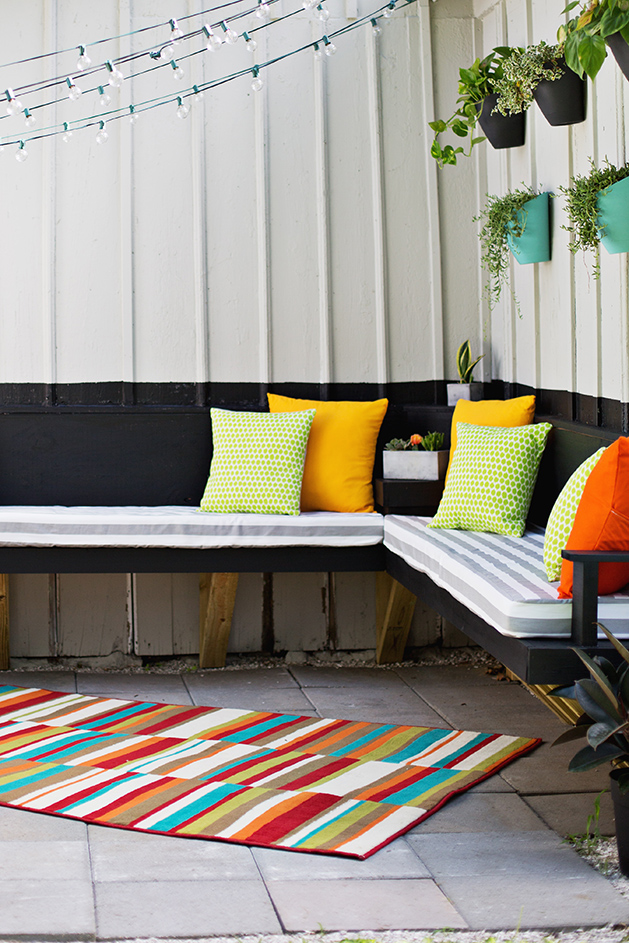 Happy building, and remember to lift with your legs. -Josh