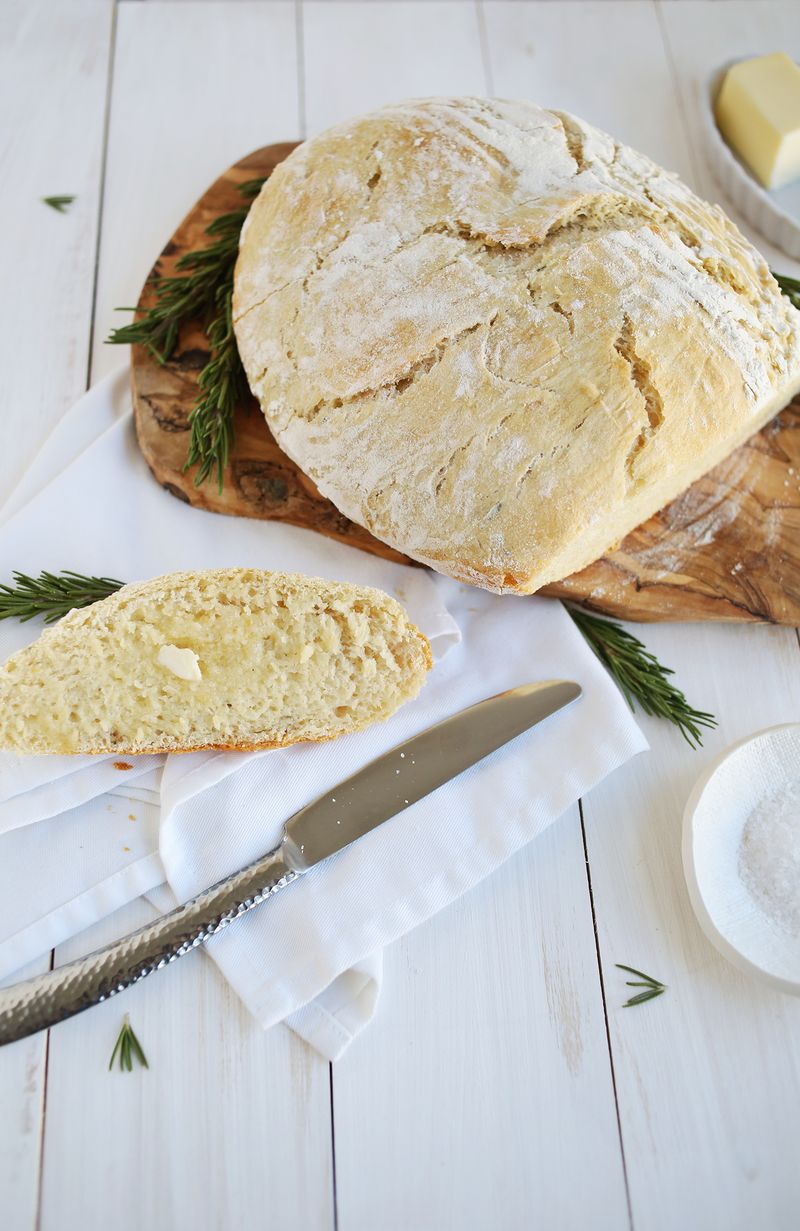 I love the smell of freshly baked bread. They should make that into a candle (surely someone has by now). I especially love adding a little rosemary to bread as it reminds me of my mom. She often baked a loaf of rosemary bread in her bread machine back when I lived at home. And if there's one thing I love eating, well, it's bread.

OK, let's focus. I can feel myself starting to drift off into a food day dream. And as I write this, it's getting dangerously close to dinner time, so I need to try and shift my thoughts away from donuts for a minute. 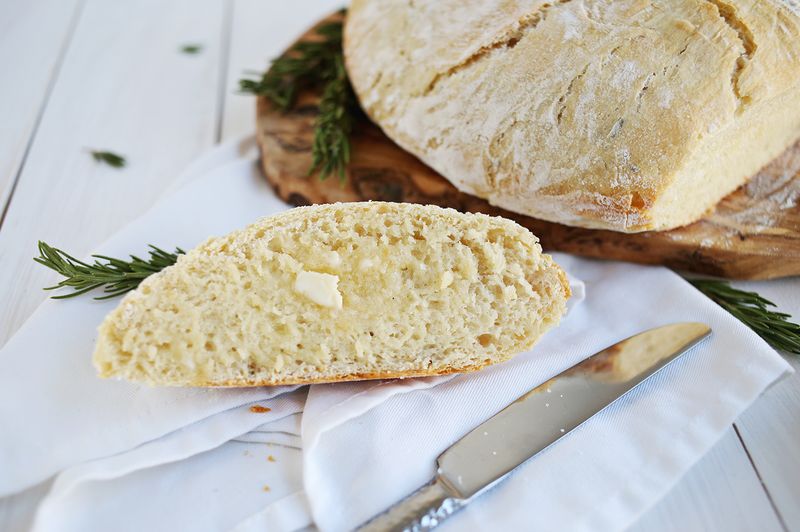 A few years ago I set off on a bread baking challenge. I had recently read 52 Loaves

and also recently been dumped. So, baking a bunch of bread really appealed to me on a lot of levels, you could say.

I tried lots of different kinds of breads and methods. It was a delicious adventure for sure. But I've got to say that one of my very favorite methods is one of the first ones I ever tried. It is what is commonly called French Oven Bread. It's super easy and makes your whole kitchen smell amazing (and it's totally yummy too). So, I thought I'd share a simple French Oven Bread recipe with you in case you've never tried it. And yes, this one involves a little rosemary. 🙂 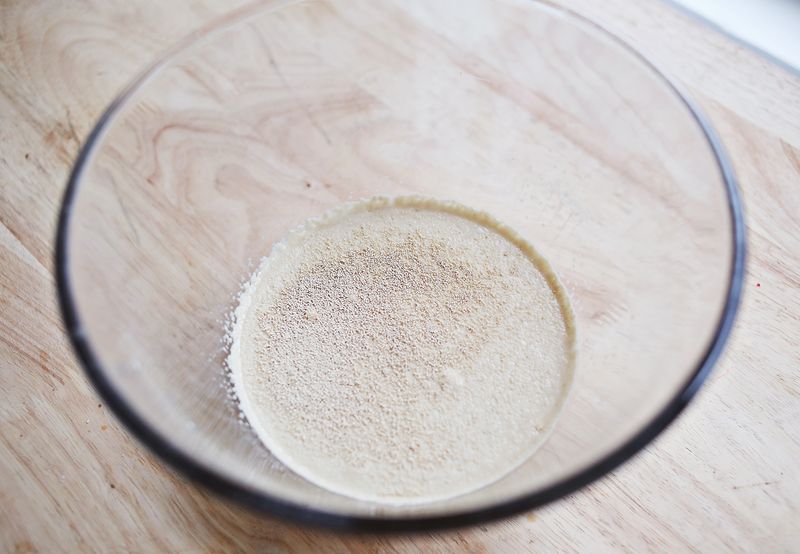 Add the sugar to the warm water. Give it a stir. Sprinkle the yeast over the top and allow it to start to come alive for a couple of minutes. It should begin to foam a little (like in the photo above). It's black magic!

In a large bowl combine the flour, salt, rosemary, and olive oil. Pour the yeast water into the bowl. Stir until a soft dough ball forms. Then knead for 3-4 minutes. I do this directly in the bowl with well-floured hands. This dough is quite soft, so it's super easy to knead. If you find that it's sticking to the bowl or your hands too much, just sprinkle in more flour. A super soft dough like this can withstand some added flour during the kneading process. 🙂 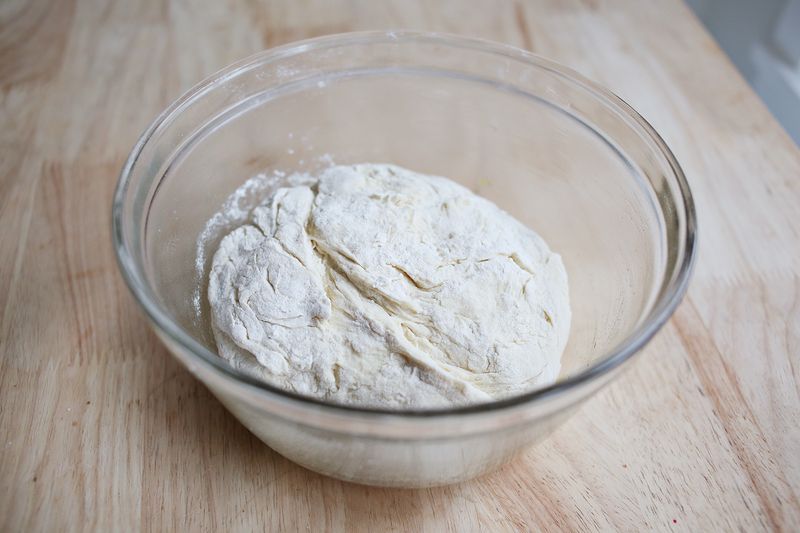 Place the dough in a lightly oiled bowl, cover and allow to rise for 1-2 hours (until it doubles in size). If you're house is super cold this time of year (like mine is), I'll often turn the oven on for a couple of minutes, turn it off, then place the dough inside and shut the oven door. Just make sure the oven isn't hot enough to cook the dough. 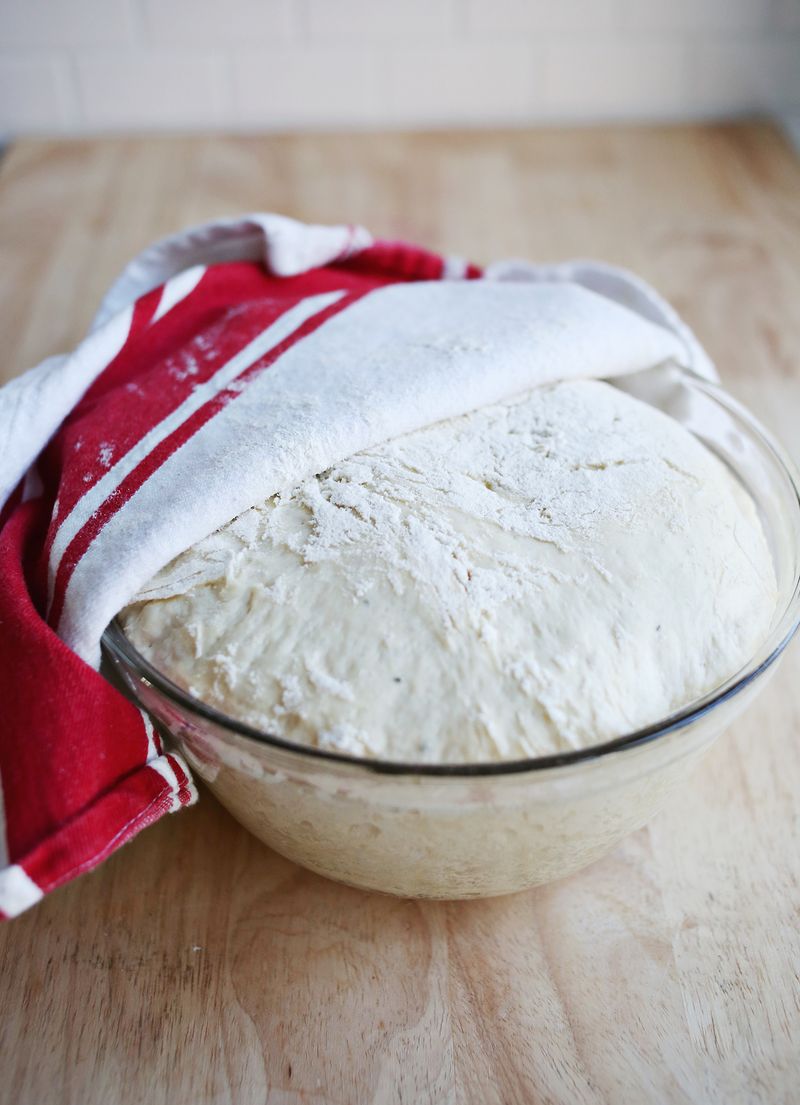 Holy cow—that's what I'm talking about! It blew up like a hot air balloon!!!!

Calm yourself. OK, now punch the dough down. Knead for 2-3 minutes. Then place back in the bowl and allow to rise for another hour. 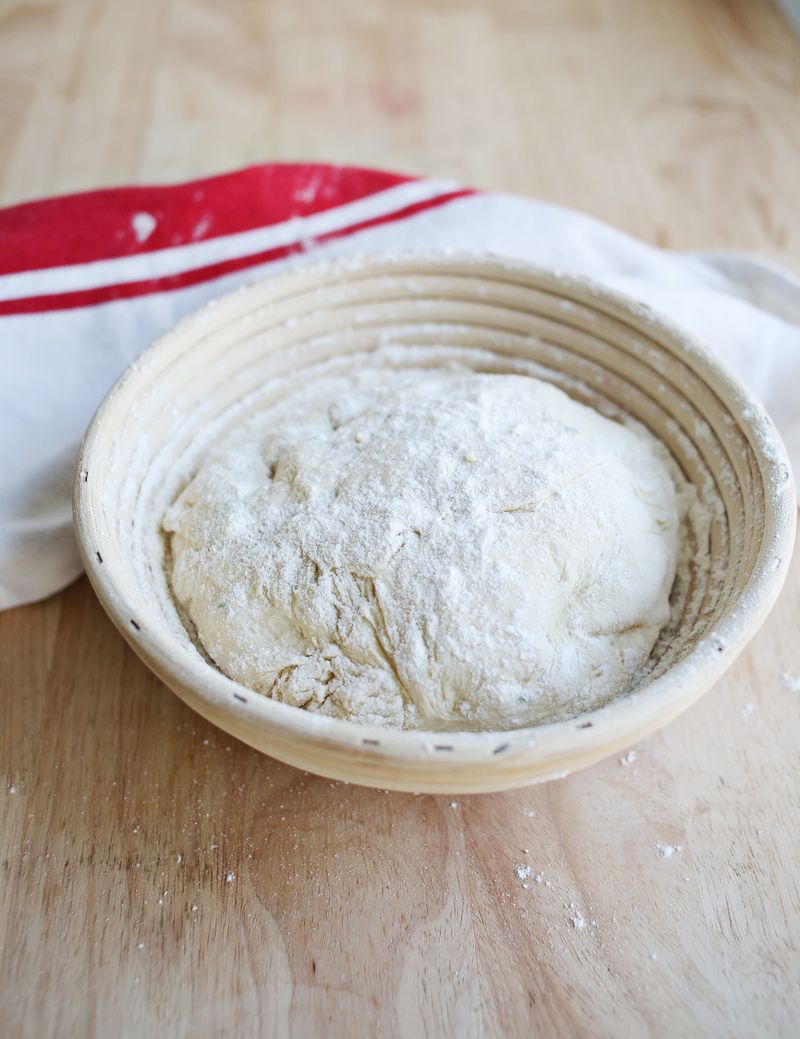 I moved my dough to a proofing bowl because it makes a fun shape on top of your loaf. This is totally optional. You could just allow the dough to rise the second time in the same bowl if you want. Remember to cover your dough while it rises so it doesn't dry out. 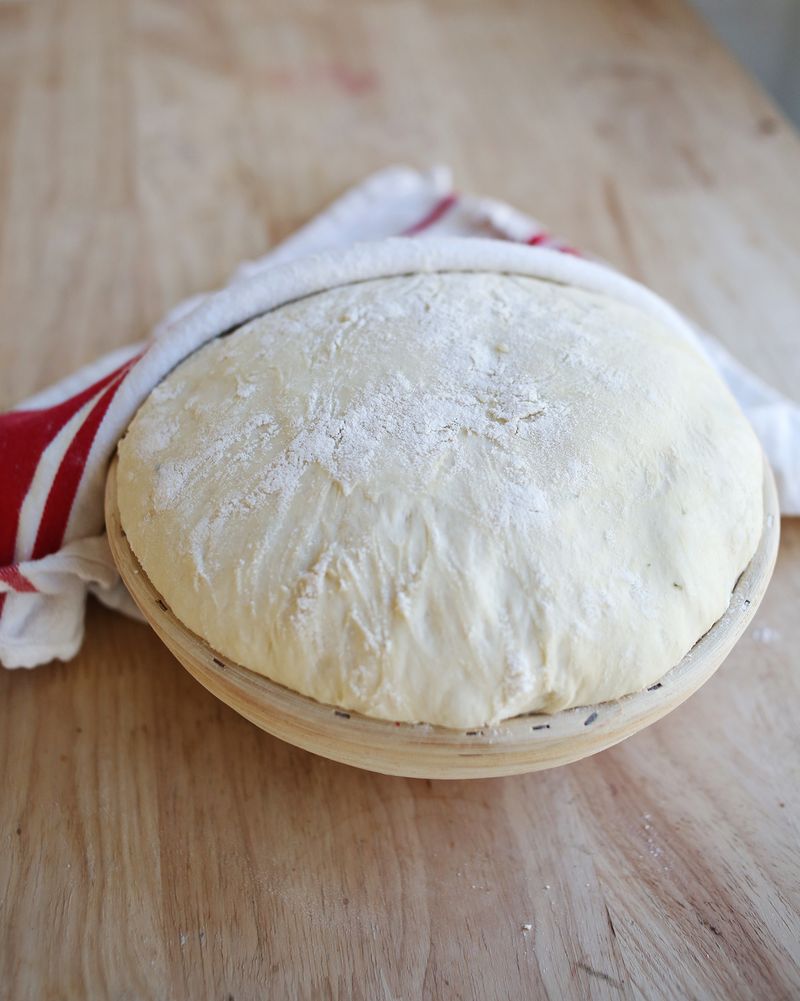 Boom—balloon moment #2. Now we're ready to bake. Depending how long it takes for your oven to preheat, you can turn your oven on a little before the end of the second rise. Set your oven to 400°F. 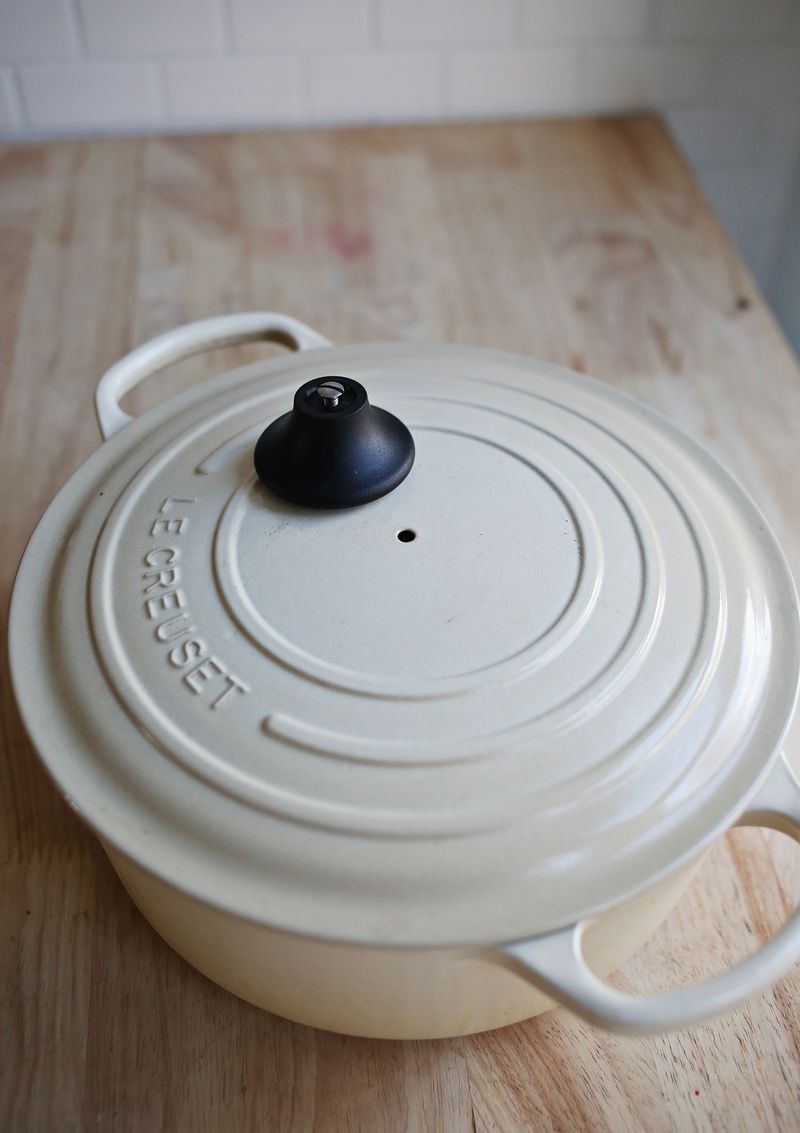 Depending on your French oven (or dutch oven), you may need to remove the lid knob before baking at this high of a temperature. As you can see, I have a Le Creuset

. Some of their French ovens (the Signature range) have lid knobs that can withstand higher temperatures while other French ovens (the Classic range) are only recommended to go up to 375°F. Check your brand's website if you're unsure. And I say, better safe than sorry, so I tend to remove the lid knob before baking bread out of habit as I've had a number of different French ovens over the years. Some French ovens won't have any of these features and you won't have to worry about this at all! But if you're new to baking in a French oven, I just wanted to make sure I draw this aspect to your attention in case you have one that needs special care. 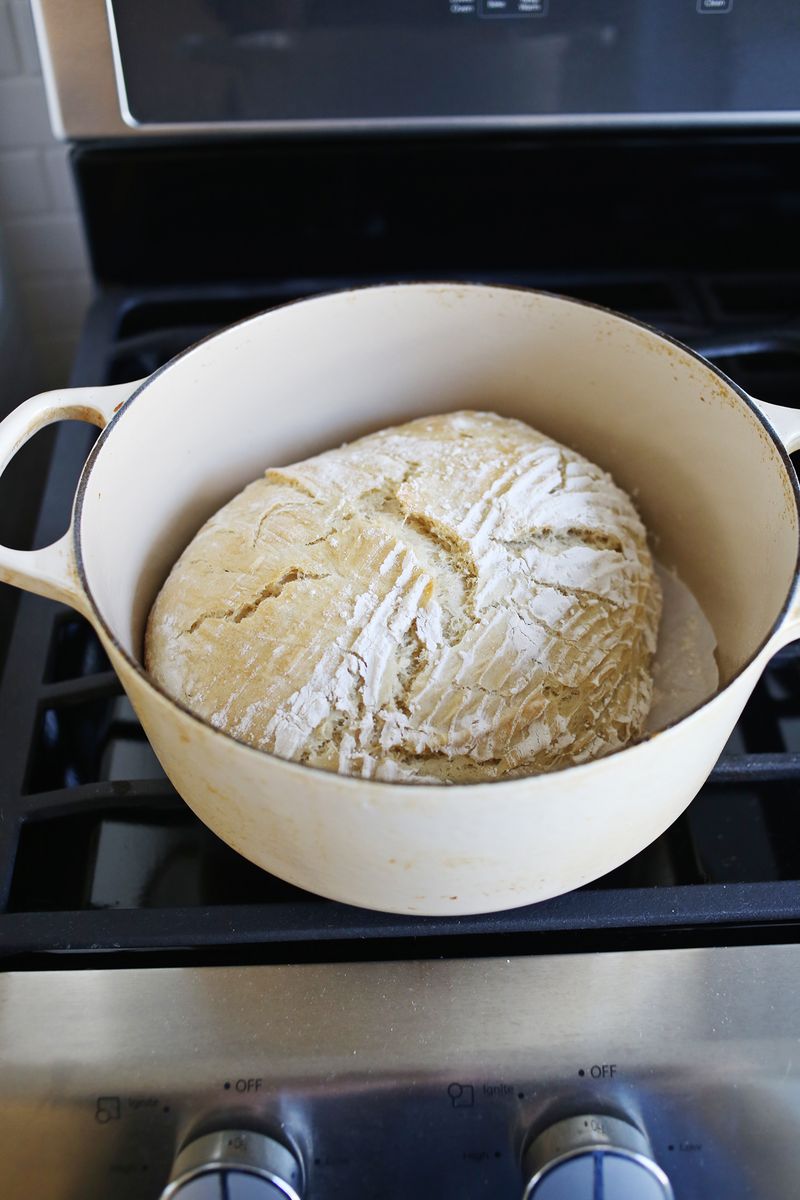 Cover the bottom of the French oven with parchment paper, place the lid on, and allow the pot to heat up with the oven. Then flip the bread out of the bowl and into the pot. Be careful, the pot will be hot, so you don't want to touch it. As you can see, my flipping was subpar. Boo! So you can only see about half of the proofing bowl design. Oh well, doesn't affect the flavor or texture of the bread, so it's not a big deal. But I'll have to work on my flipping skills some more. 🙂

Bake with the lid on for 10-12 minutes. Remove the lid and continue to bake for 18-22 minutes until the bread looks crusty and done. Once you remove the bread from the oven, sometimes you'll hear it kind of crackling. That's a good sign! 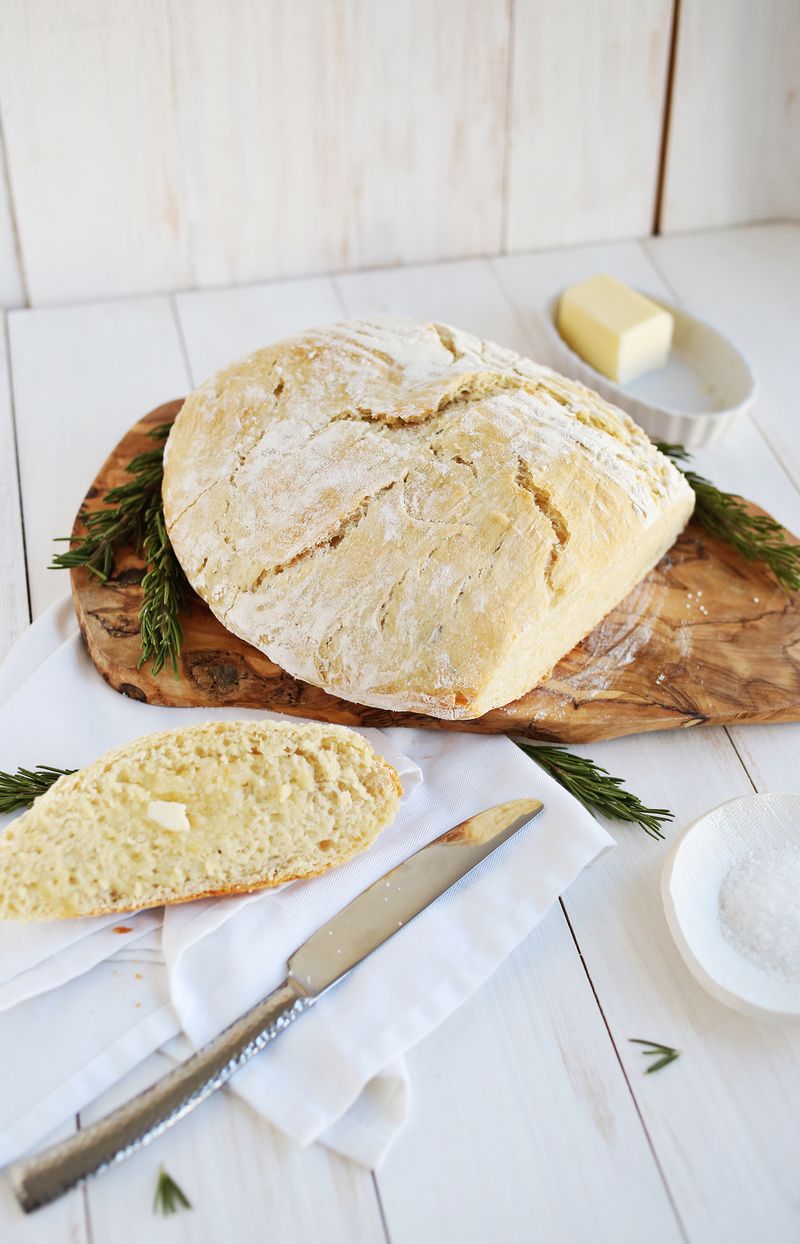 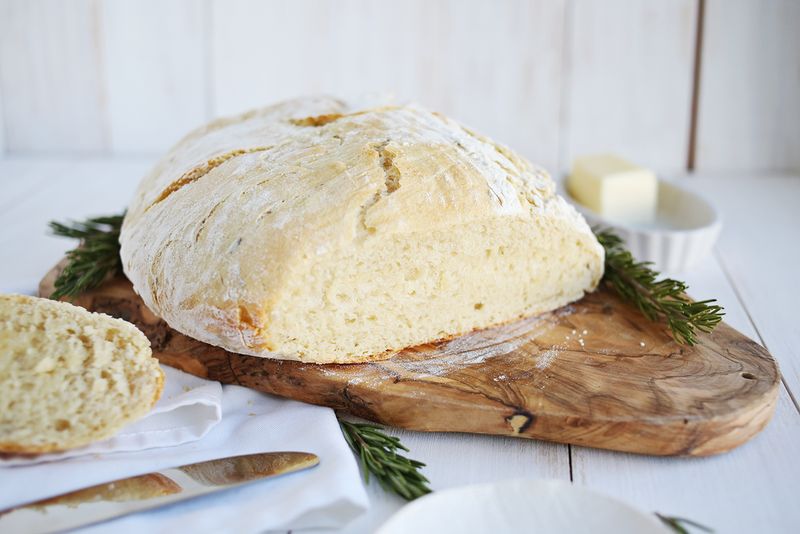 Allow the bread to cool enough to handle before slicing into it. I love to eat fresh bread when it's still warm enough to melt butter added to a slice. That's what I call luxury. This would make a great companion to soup or if it gets stale, French toast. 🙂 If you have an oven safe vessel, I highly recommend you bake some bread this week! xo. Emma