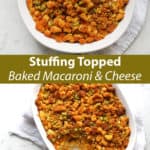 If I had to pick just one side dish for my Thanksgiving meal, I would pick baked macaroni and cheese. And maybe this means I should be seated at the kids’ table? Ha.

But, this year I have truly outdone myself with this stuffing topped baked mac and cheese—it is carbs on carbs heaven! Ha. 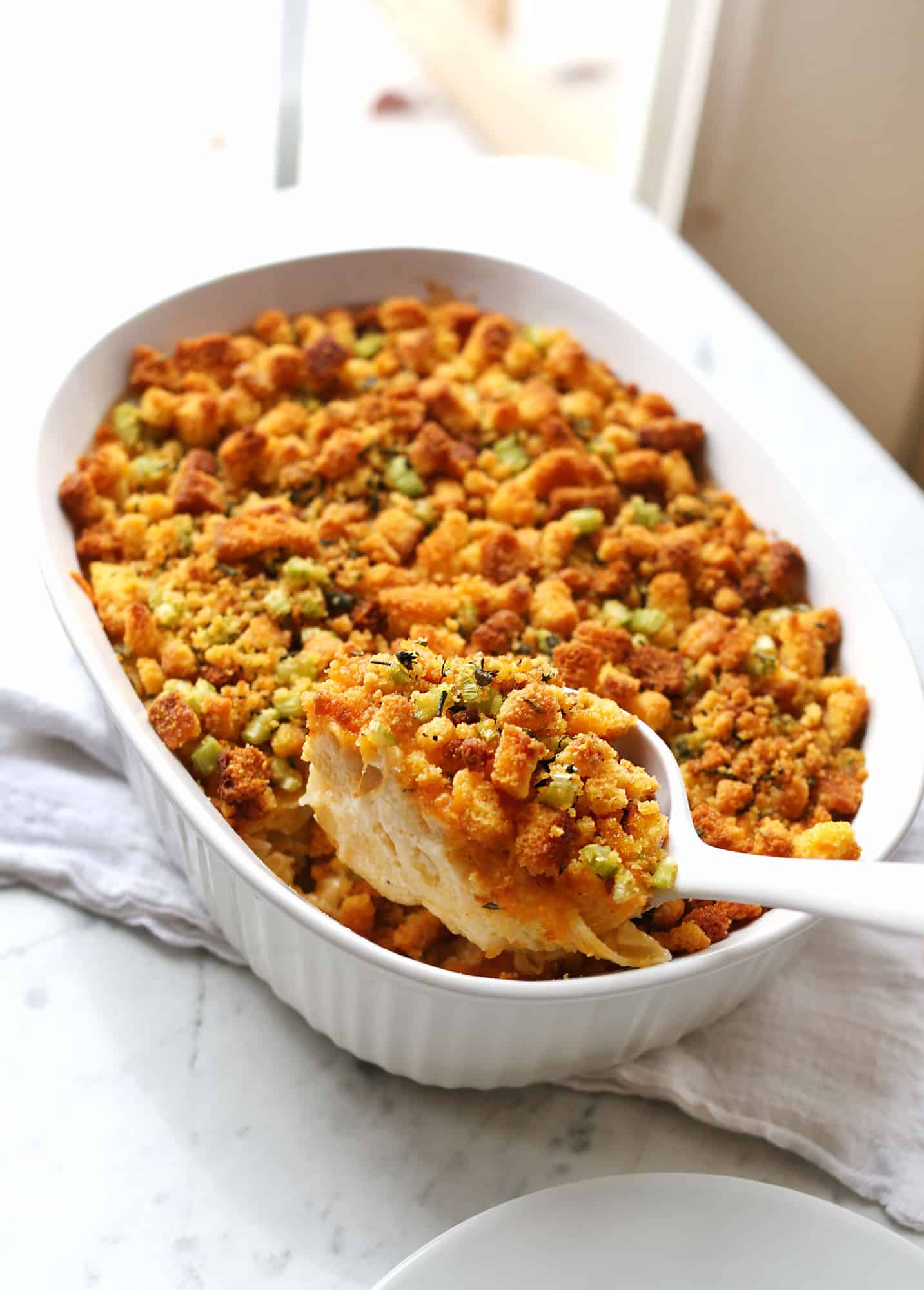 This stuffing topped baked mac and cheese just screams holiday to me. It has all the flavors of stuffing combined with the creamy decadence of baked macaroni and cheese.

I love this out of the oven and I love warming up the leftovers the next day, which is one of my favorite parts of Thanksgiving … the leftovers! 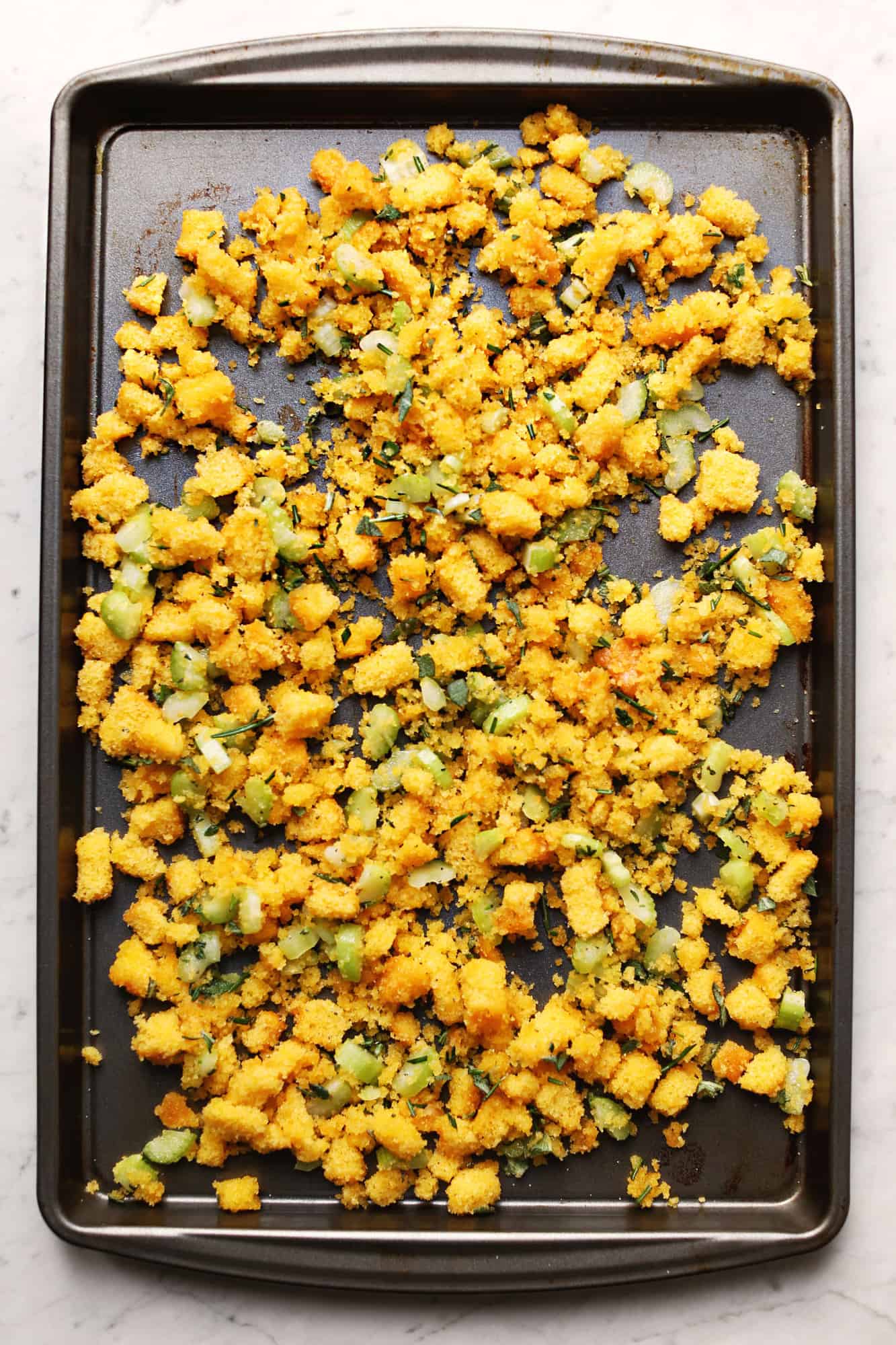 This dish comes together pretty easily too. You simply toast the stuffing breadcrumbs (see recipe below) and then put together the macaroni casserole base. Bake together and once it’s golden and bubbly you’re done. 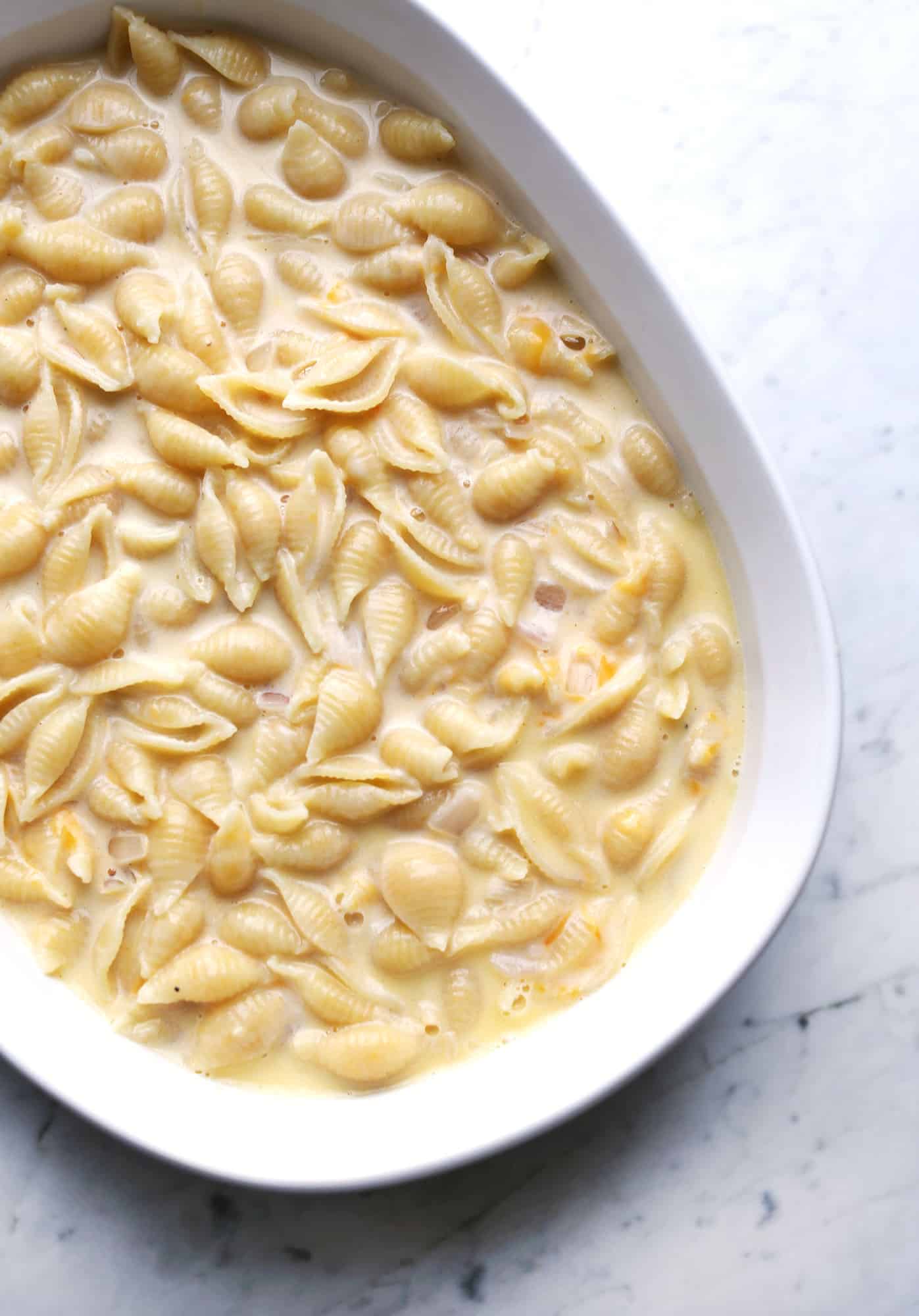 This is what the macaroni looks like before baking—it’s actually quite soupy. The key is to undercook the noodles because they will absorb even more liquid as the final dish bakes. Then you end up with a denser, melty, cheesy casserole. 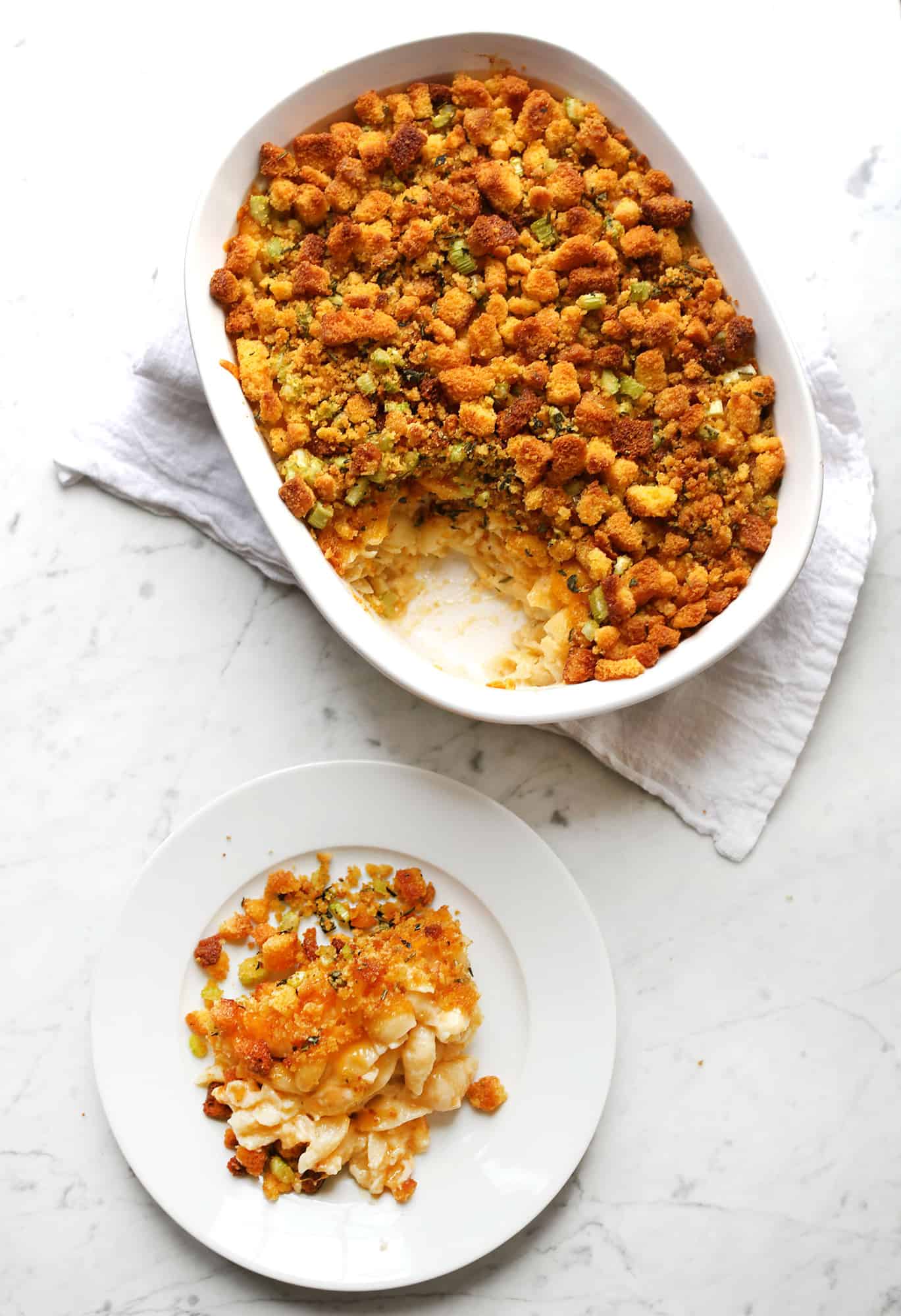 I used cornbread for the stuffing topping, but you can use any kind of bread. I love how cornbread brings a little sweetness to the dish, but other bread flavor profiles would be delicious here as well.

You could also add other flavors to the stuffing topping if you prefer, like some bacon bits might be a good addition for some—up to you! Lots of ways to customize the recipe below. 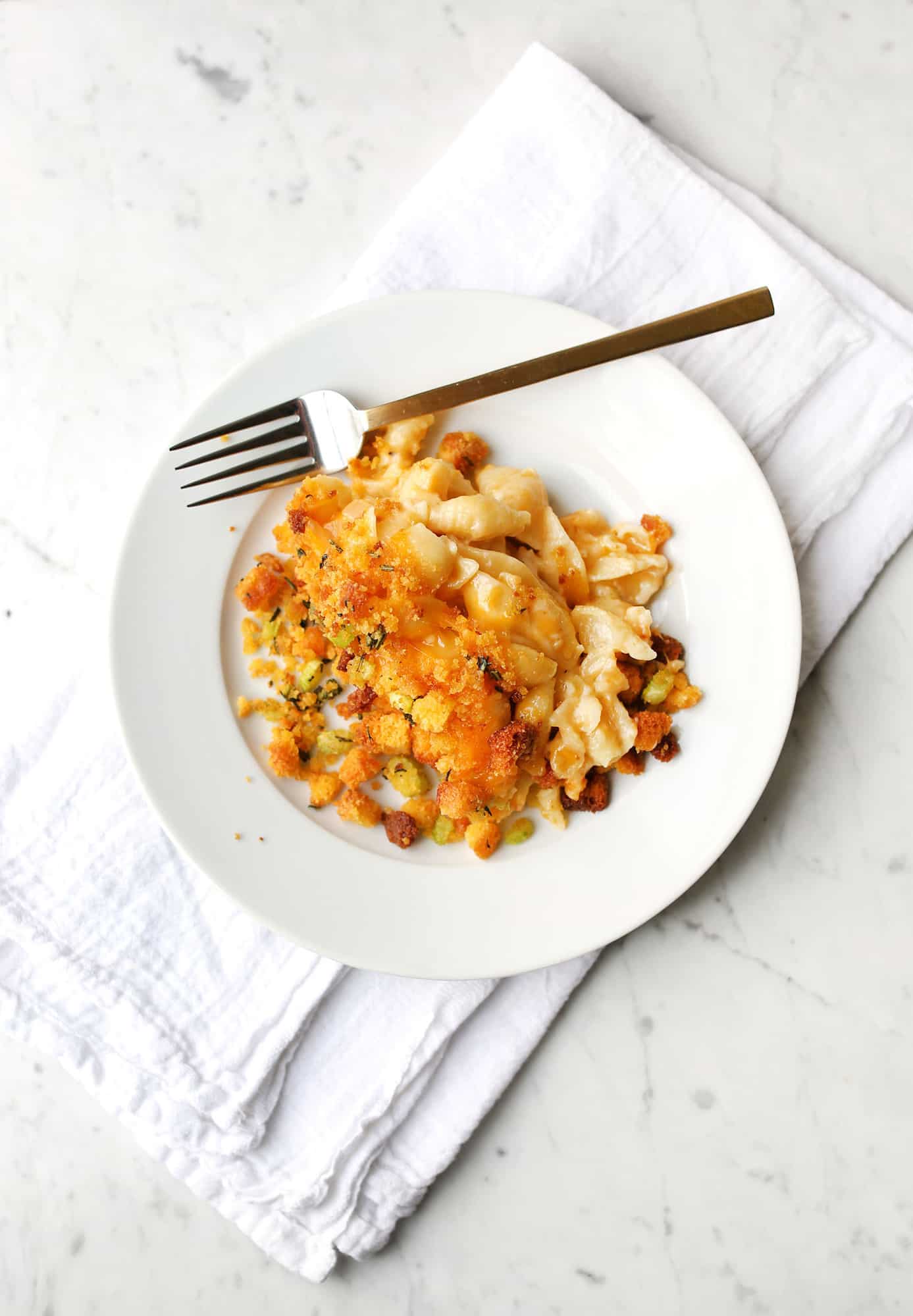 This for real may be my all-time favorite holiday side dish. 🙂 Thanks for letting me share! xo. Emma

END_OF_DOCUMENT_TOKEN_TO_BE_REPLACED

Dang! I’m definitely keeping this one in my pocket yum!!

This turned out so well, Emma! I would also love thoughts on ways to make it ahead of time for next year. Thank you for a great recipe!

Any tips for making this ahead of time? Thanks!

I’m on my own this Thanksgiving & this will be my dinner for sure. Can’t wait to smell this in the oven while I’m putting up Christmas decorations! Thank you, Emma!!

Oooh, Emma you’re a genius! I’m not a huge fan of stuffing, but on top of mac n’ cheese! My best friend and I always do Thanksgiving together and now we can combine our two favorites and shrink the avalanche of leftovers 🙂

I’m curious about the cornbread being too crumbly to cube. Do you have any tips or specific recipes to use?

I used store-bought cornbread (I think I had gone to Walmart that trip) and it cubed great. But if it crumbles that’s totally fine too! The goal here is bread crumbs so it’s not biggie either way.

This looks super yummy! It’s basically my 2 favorite dishes in one. 🙂 Thanks for sharing!

This recipe sounds yummy! When making any macaroni dish, I replace half of the macaroni noodles with cauliflower pieces of about the same size as my way to sneak in more vegetables and reduce the carbs. My family doesn’t notice the difference and the taste is the same.

I LOVE that idea! Thanks for sharing.