It’s no secret that we LOVE subway tile here at ABM. It’s fresh, inexpensive and classic. In the past I have stuck with a traditional offset pattern for all of my subway tile. But recently, as I’ve been renovating my new home, I’ve gone a different route by mixing up the patterns throughout the home. It’s been a fun way to add a little personality to my basic, white tiled spaces. 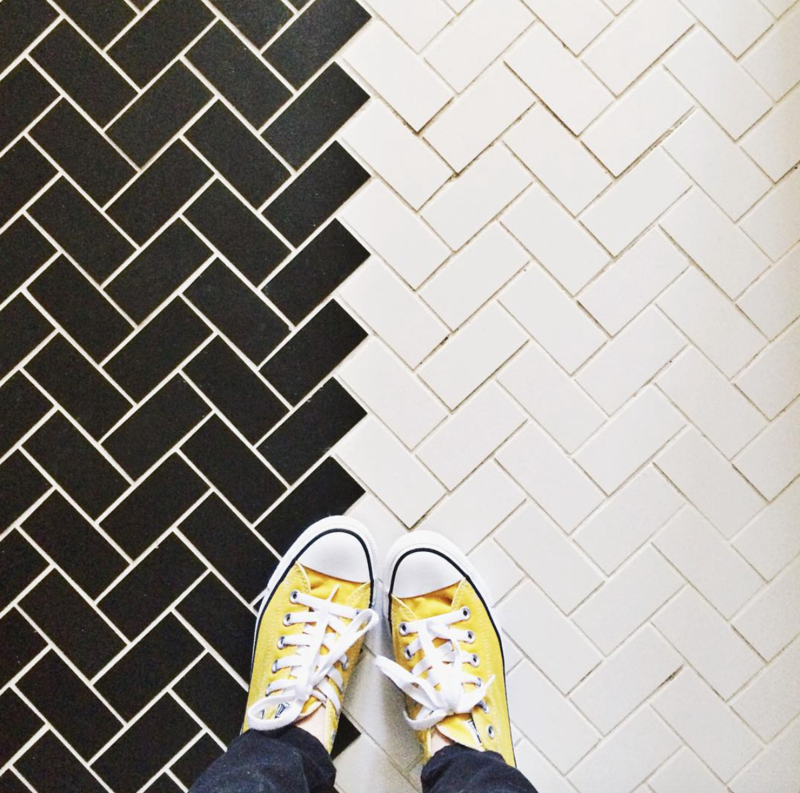 If I had to pinpoint the moment that I actually fell in love with subway tile, I would say it was this moment. Emma and Laura had the vision for this special floor in our Habitat for Humanity house, and it turned out to be my favorite detail. It’s so bold, but also not insane. Right? I wish you could have seen it in person!

Anyway—today I’m excited to share a guide of some of my favorite patterns for laying subway tile! 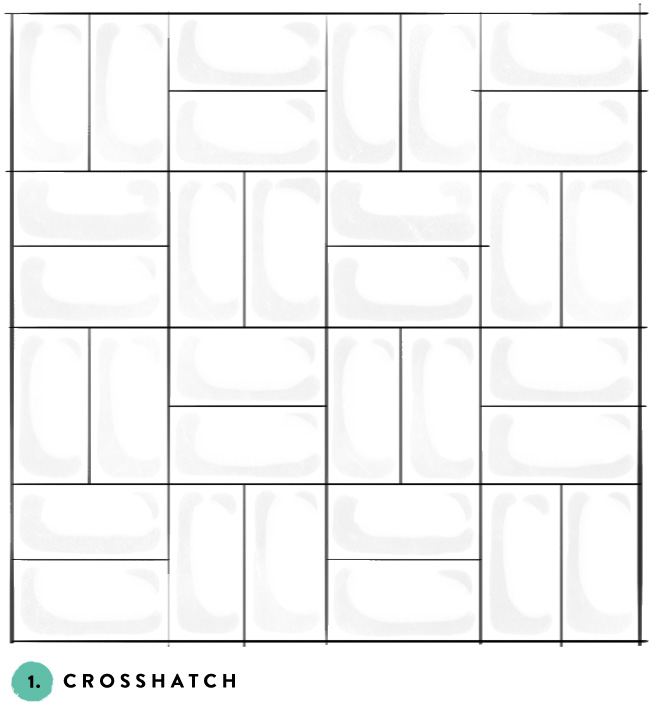 Since I couldn’t find a good example image for this one, I’m thinking maybe I should do it in my own home. I really love this pattern and I haven’t picked the pattern for my master bathroom yet (yep—it’s still gutted). 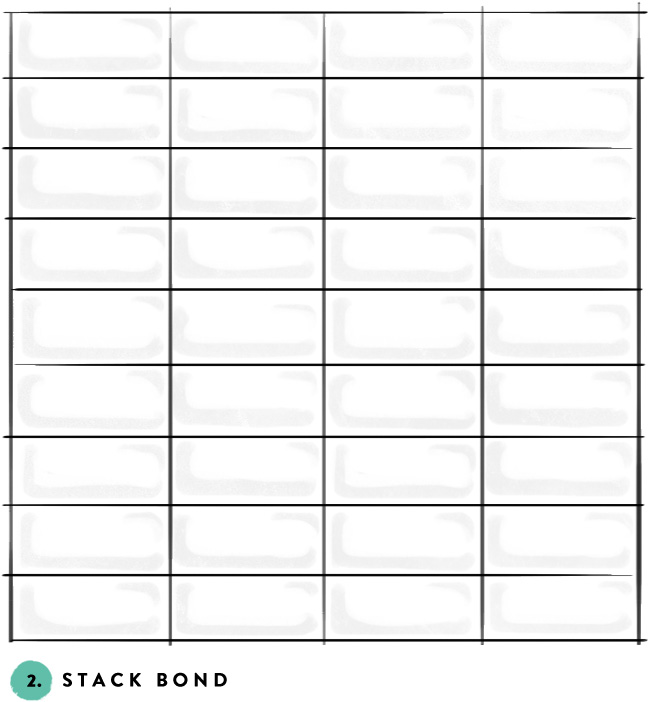 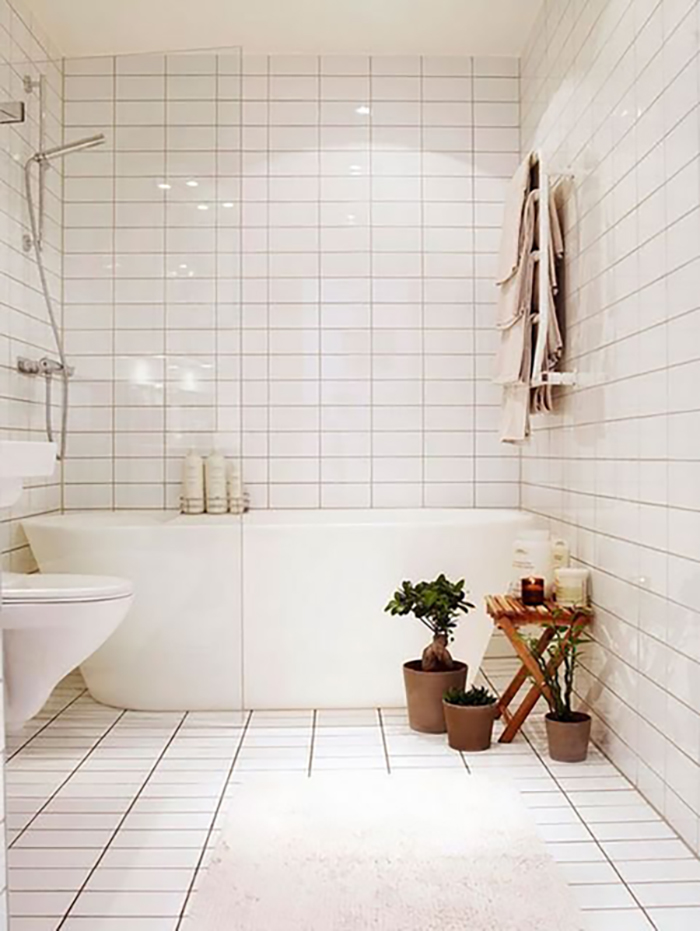 I love the clean lines. So fresh and modern! I chose this look for our guest bathroom. I wanted something super clean and simple. I’m planning to pair it with a lot of texture, brass elements and pops of color. 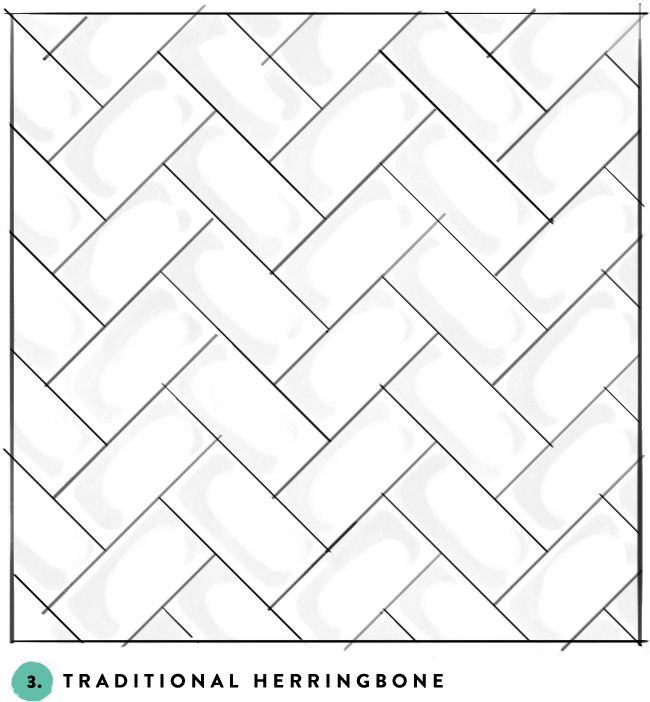 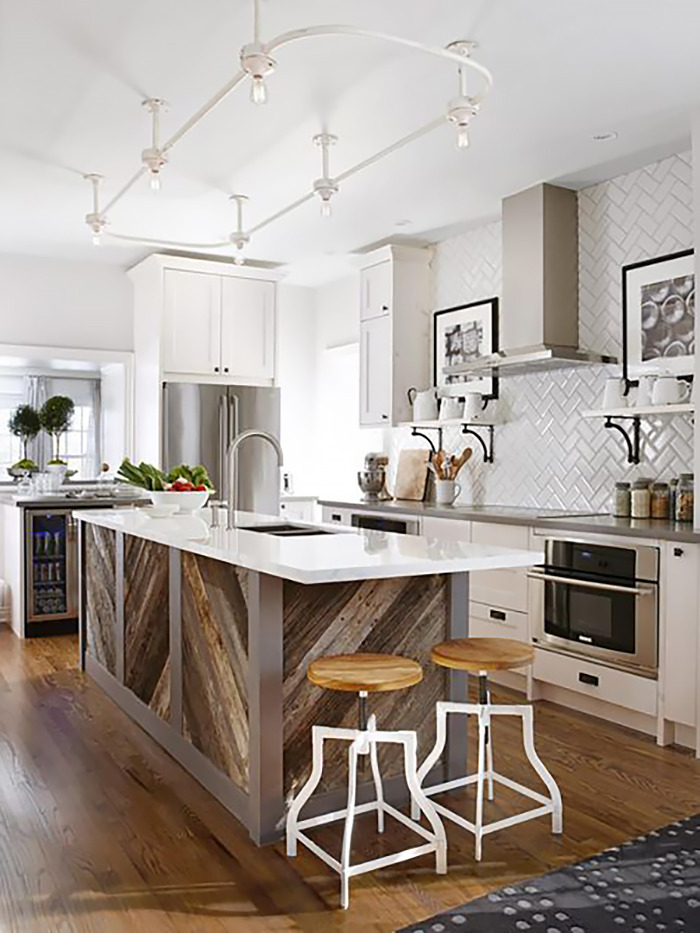 One of the prettiest subway tile patterns, in my opinion! It reminds me of a cool Paris apartment. 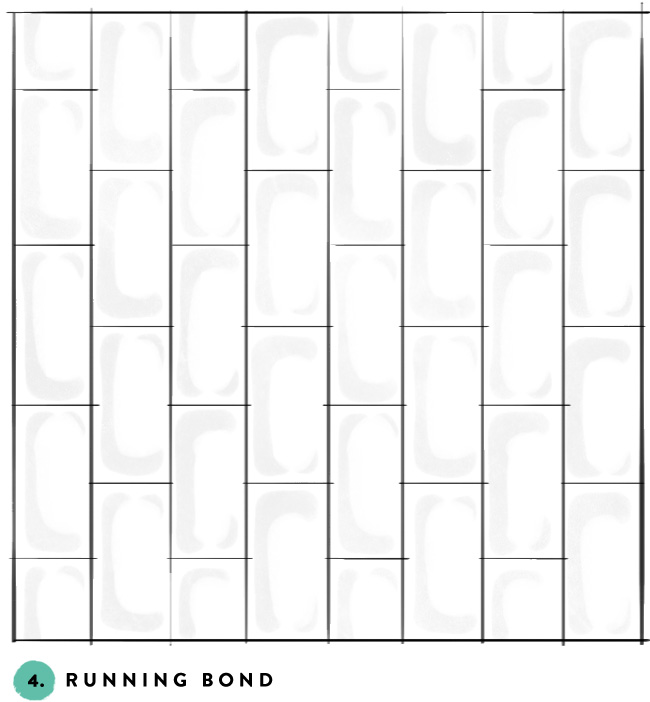 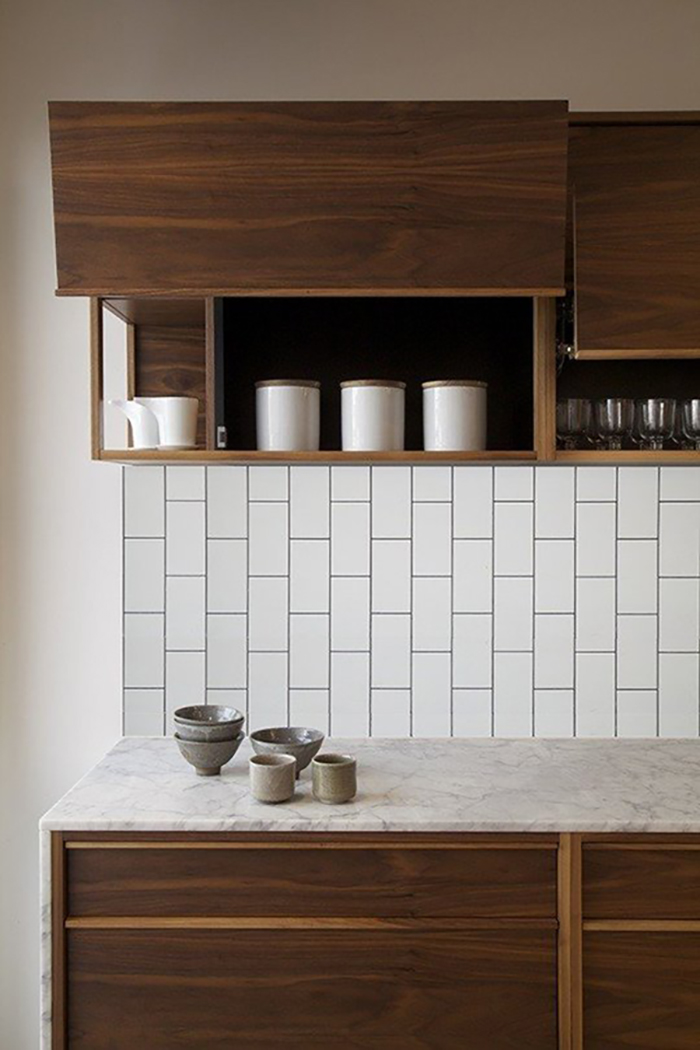 I chose this pattern for the shower in one of our bathrooms. It turned out really great. It’s like the traditional offset pattern, just flipped on its side. This pattern can make a space appear taller. 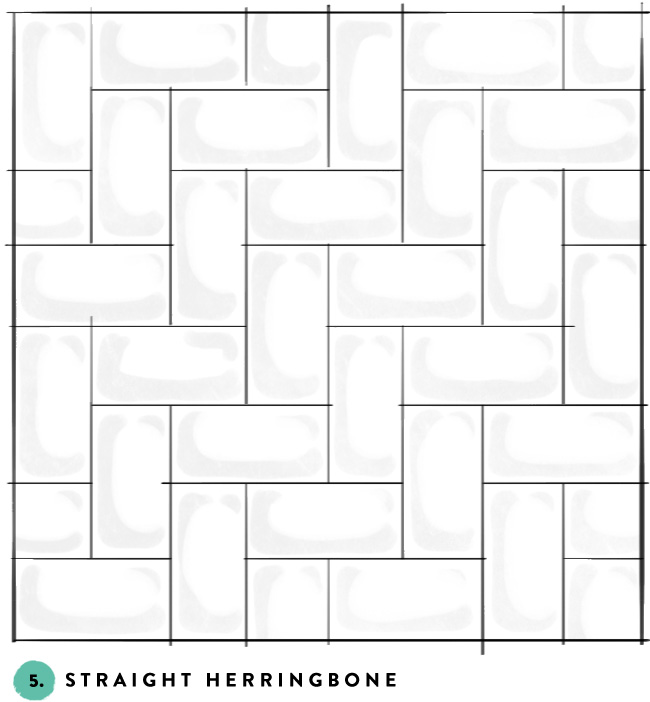 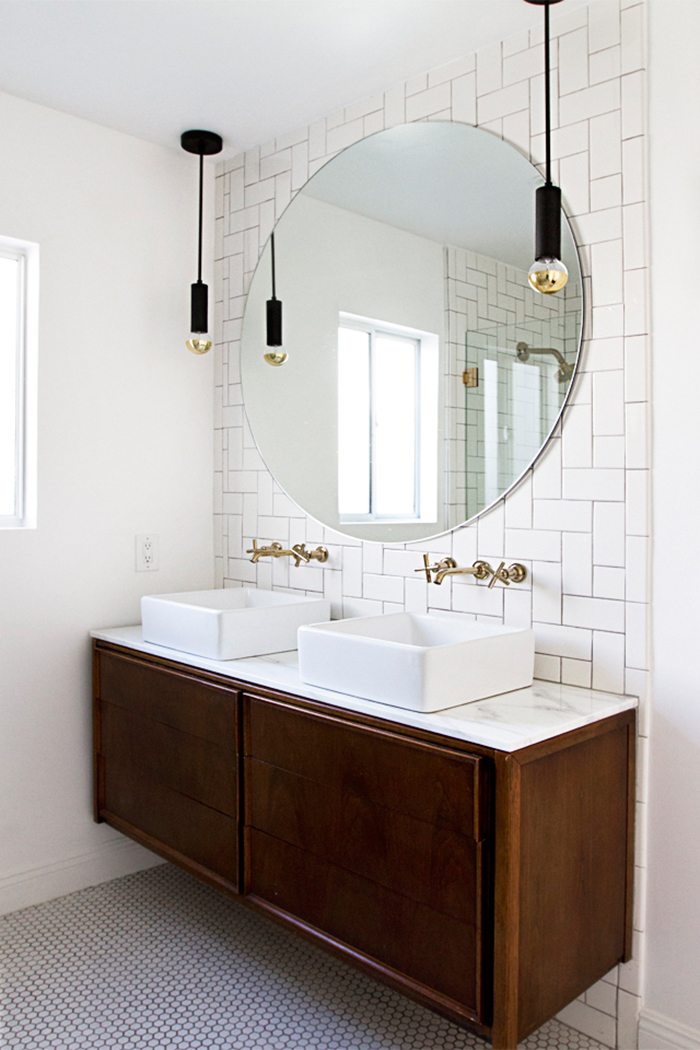 My personal favorite herringbone variation. I chose this pattern for our kitchen backsplash, which is being installed right now! (Augh! The anticipation is killing me!) I think of it as a geometric version of herringbone. 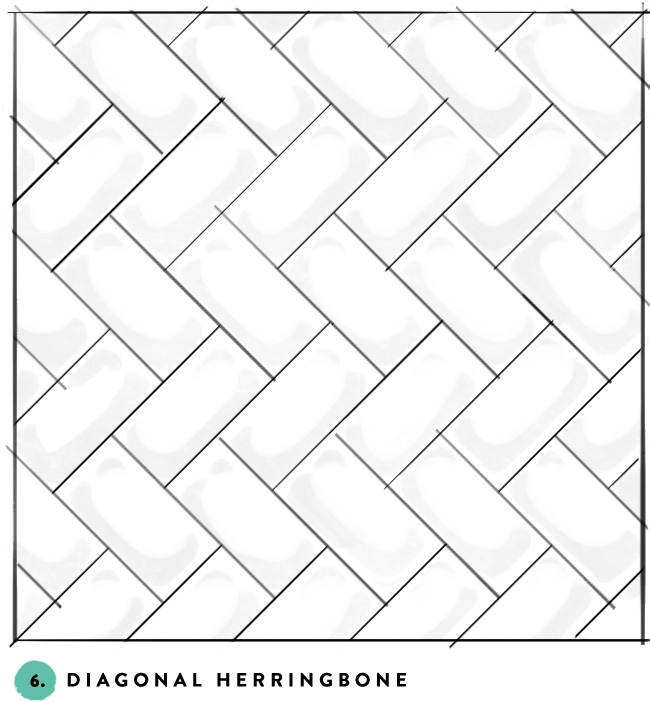 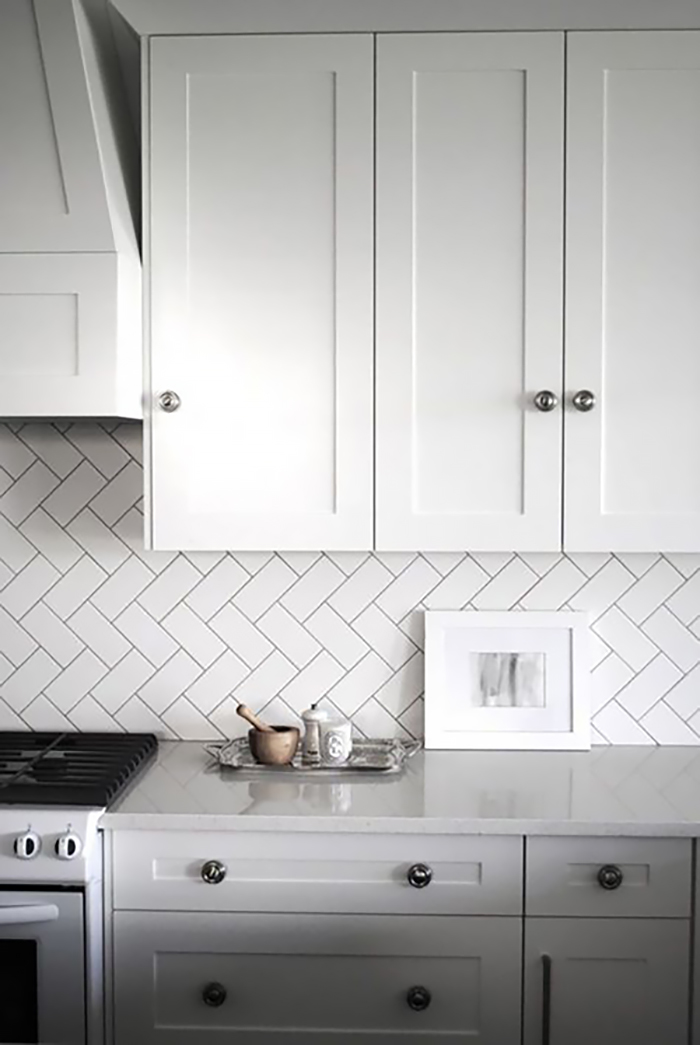 Another take on herringbone. It’s rad how the smallest variations create a totally fresh, unique pattern. I’m a big fan of all the vertical options. 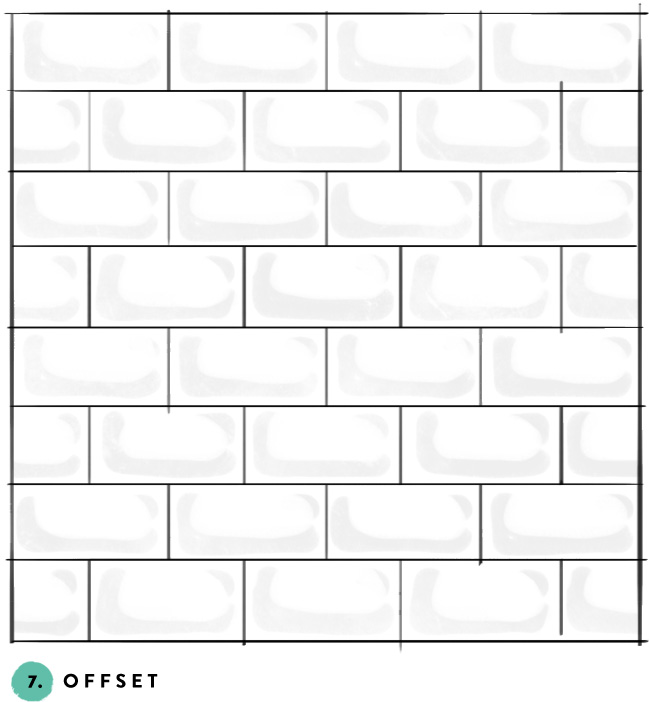 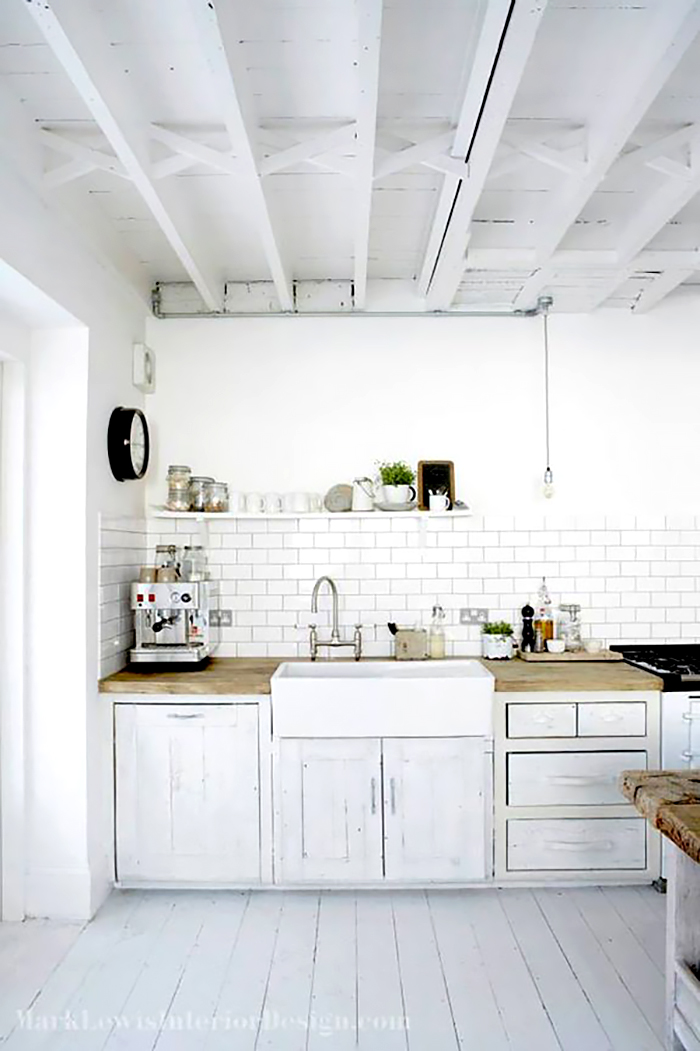 The most traditional pattern for subway tile. I will say, this is the safest choice if you are flipping a house or remodeling with resale in mind. It’s also the most classic and less noticeable if you want to save the show-stopper moment for other elements in your space.

Personally, I think I would also choose this traditional pattern if I was doing a bold colored subway tile. I like that mix of classic and fun. If I did a rainbow subway wall, for example, I’d choose classic offset.

Image via Blood And Champagne. 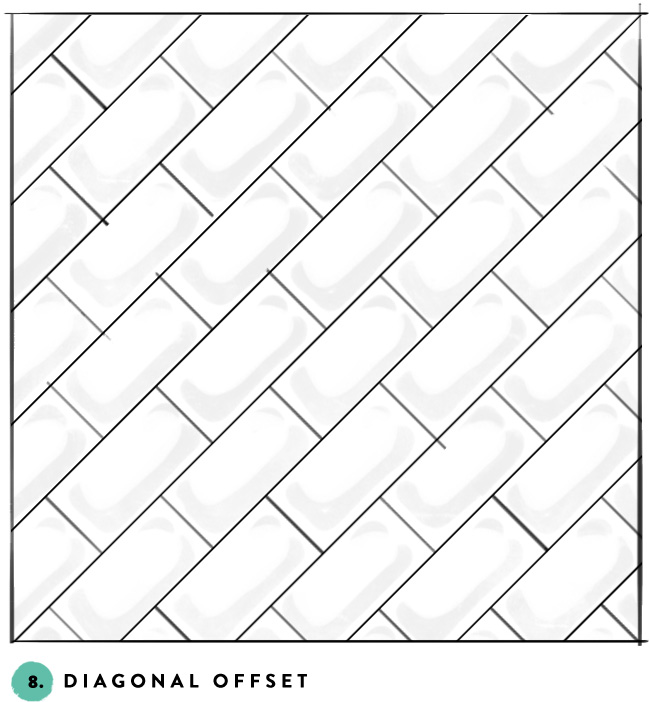 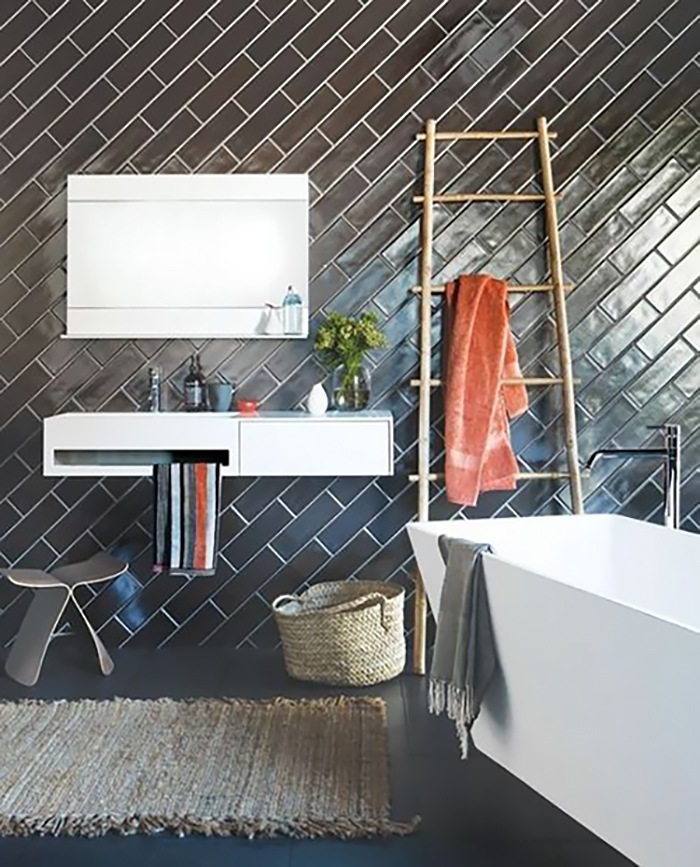 One of my favorite patterns because it’s so uncommon. I chose this for the backsplash in a bathroom, but it looks a lot more subtle than this example because it’s white tile with white grout. I love it with the black tile, so bold! 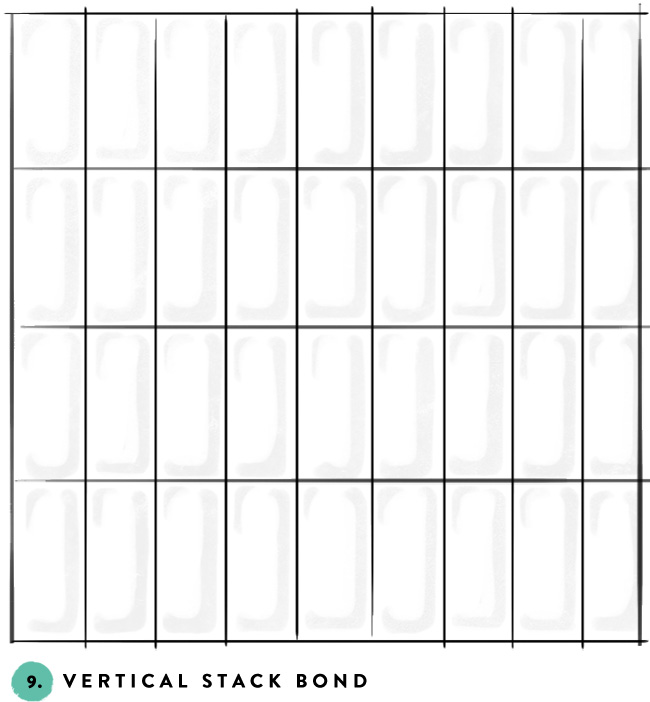 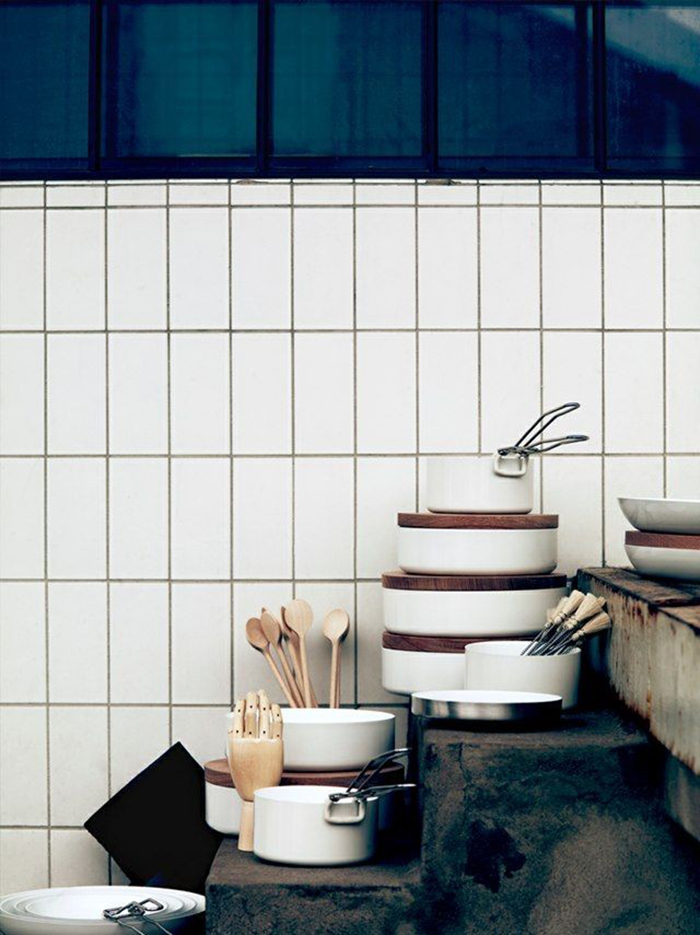 Again, I’m a huge fan of the clean lines here. It reads much more modern than a traditional pattern. Very cool! 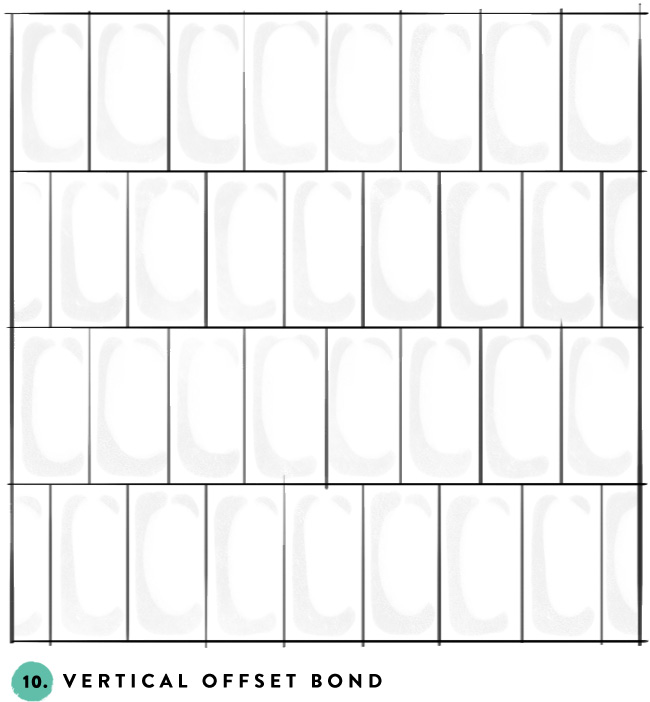 Subway tile is very budget friendly! In my original plans for our new home, I had a lot of marble and specialty tile planned for bathrooms and the kitchen. But when other areas of our budget started running over (insert frightened emoji here), I switched most of the tile to subway tile and saved over eight thousand dollars just with that one swap (party horn emoji?). I sourced it all over Nashville in both big box stores and local stores to get the best possible deal, which shaved off another couple thousand dollars since the volume I needed was pretty high. Always ask for bulk discounts. I saved hundreds one day because the store was running a tax-free weekend sale.

In total, I saved over ten thousand dollars by choosing subway tile!

Every contractor is super different on how they price the installation. But both of the contractors I ended up using to install my subway tile did not charge extra to do special patterns. Some patterns require more cuts and some don’t. So don’t be afraid to ask! It’s not necessarily going to be more expensive than the traditional pattern, and even if it is, it may be more minor than you think.

Oh, and by the way, I know a lot of blogs out there have taught how to DIY tile installation. So if you’re brave, there are a lot of good resources! For me, personally, it’s worth every penny to have it installed by a professional because tile is expensive to undo and I just don’t feel up to that risk. So, get a few quotes and see what you think, but I recommend hiring a professional for installation. 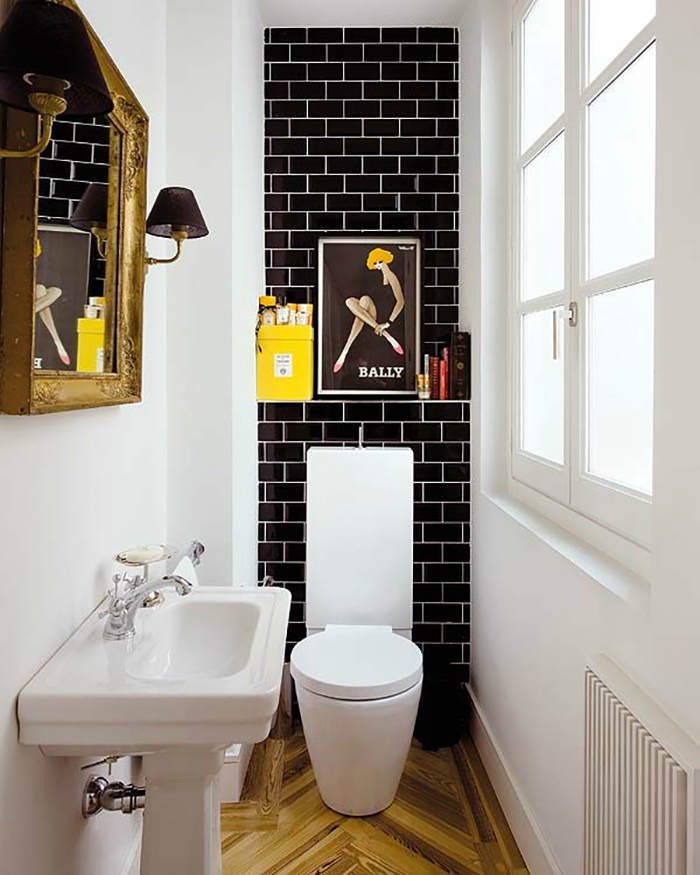 As you can see, there are tons of really fun possibilities for how you lay subway tile. It doesn’t have to be traditional. It can be super creative. And I love that you don’t have to spend crazy money to have tile in your home that is custom and special!

Have fun with it. xx- Elsie

P.S. You can read about my removable kitchen tile backplash here!