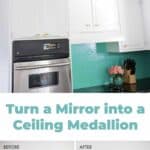 When renovating a space, it’s amazing to see how much changing out light fixtures can alter a room. We have mostly been focused on changing out wall colors and flooring options at our new house, but the existing light fixtures have really been killing the new room vibes.

So, I thought I should turn my attention upwards for a bit and find a solution for some of the basic fixtures in the house.

I was searching online for something unrelated a few weeks ago when I ran across this amazing DIY light fixture that uses a sunburst medallion to makeover a standard “boob” light.

Not only is it genius, but I also happened to have the exact mirror that she used. So it seemed like the light and I were made for each other.

I changed up the process and the light I chose a little to fit the more mid-century vibe we have going, but this is a great idea for anyone that wants to create a statement flush mount light on the cheap. 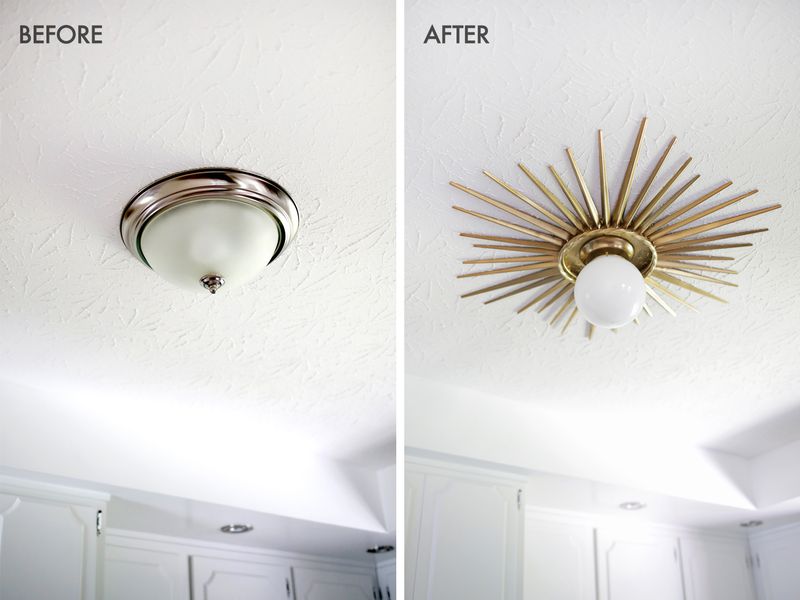 Supplies:
–sunburst mirror frame (You can use any similar mirror as long as the mirror can be taken out or carefully broken out so that you can use the frame.)
–ceiling flush mount light small enough to sit inside your mirror frame hole
–painter’s tape
-screws and a drill
–spray paint (optional) 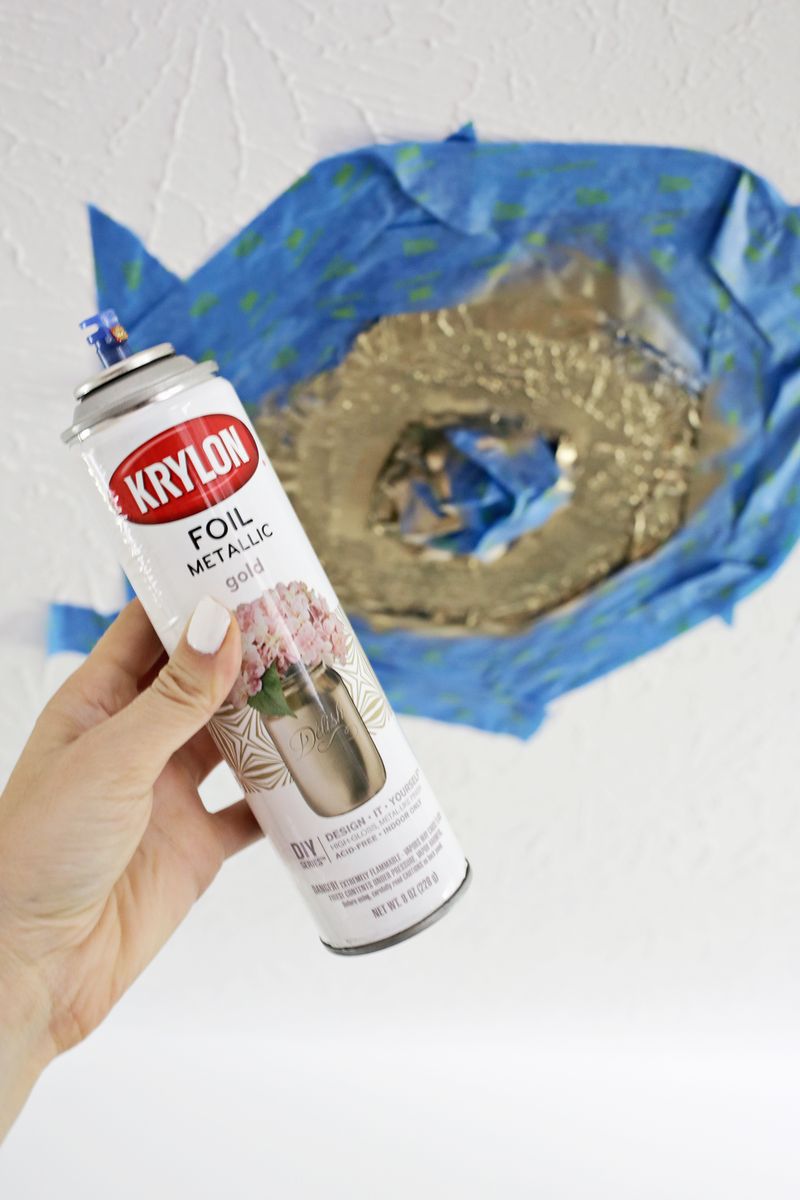 Now, since we are talking about removing and installing light fixtures, you can either do this project in tandem with an electrician, a family member or friend that has experience, or follow Mandi’s guide to hardwiring light fixtures yourself!

I just learned how to do it myself while working on this house. It’s really pretty simple once you get the hang of it, and I’m so glad I have that skill now.

Depending on the method you choose, you’ll need to remove the existing light fixture. Since I chose a light that was a few inches smaller than the mirror frame, I needed to paint the ceiling area that would be showing in between the fixture and the mirror.

I just placed each fixture where they would go and traced around them to get the area I needed to tape off and paint.

If you’re worried about possible overspray from spray painting indoors, then use a liquid paint and brush instead (or hang up plastic behind you and make your husband hold the vacuum hose near the paint like I did—ha!). Remove the painter’s tape when dry. 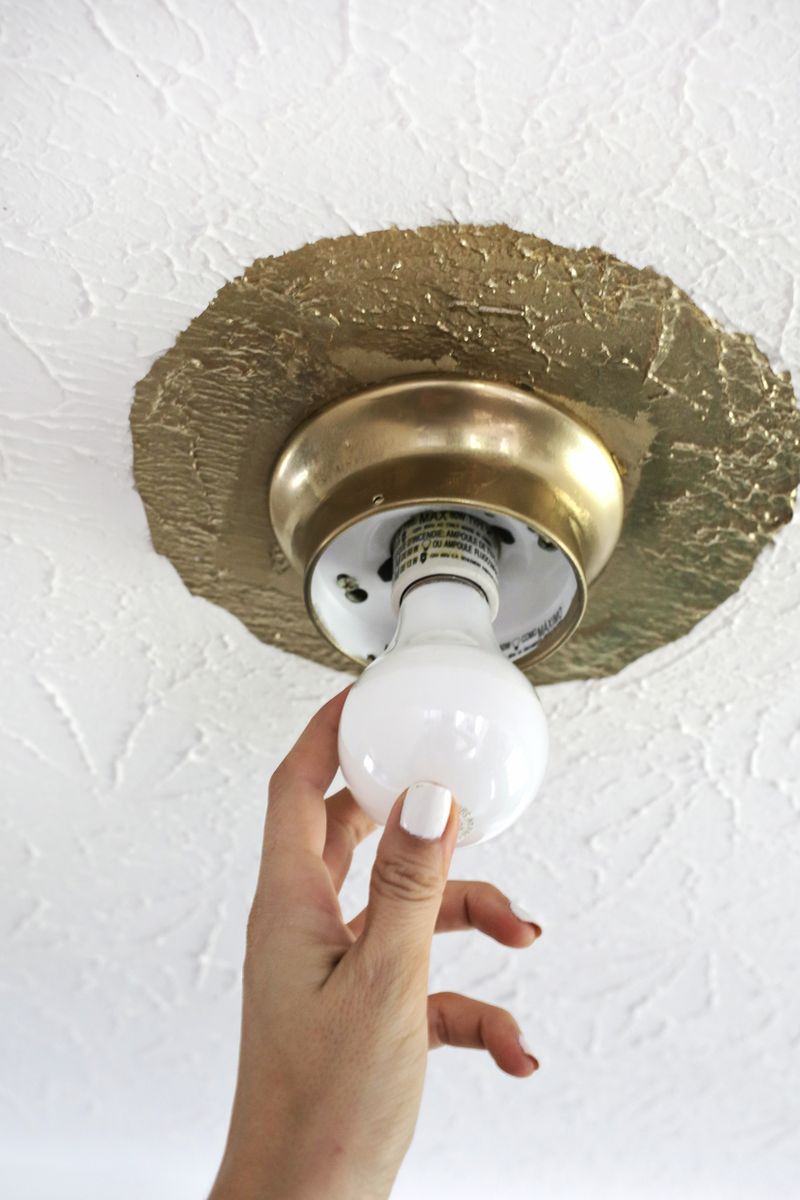 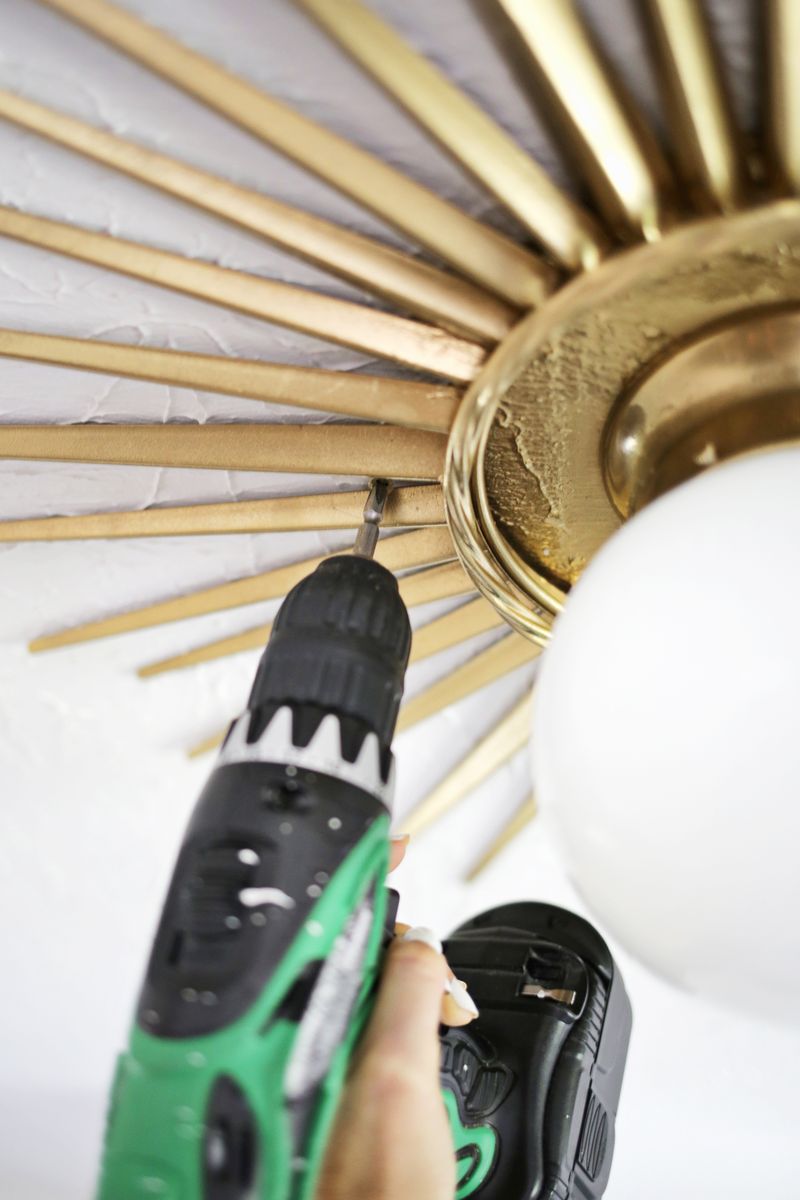 For the mirror frame, I bent back the tabs that were holding the mirror in place and removed the mirror and cardboard backing from the middle. All it needed was a coat of the same gold spray paint so they would all look like one unit and it was ready to hang!

I just used 4 screws and wedged them in between spokes of the light to hold the frame in place. Once the frame was secure, my new light was finished! 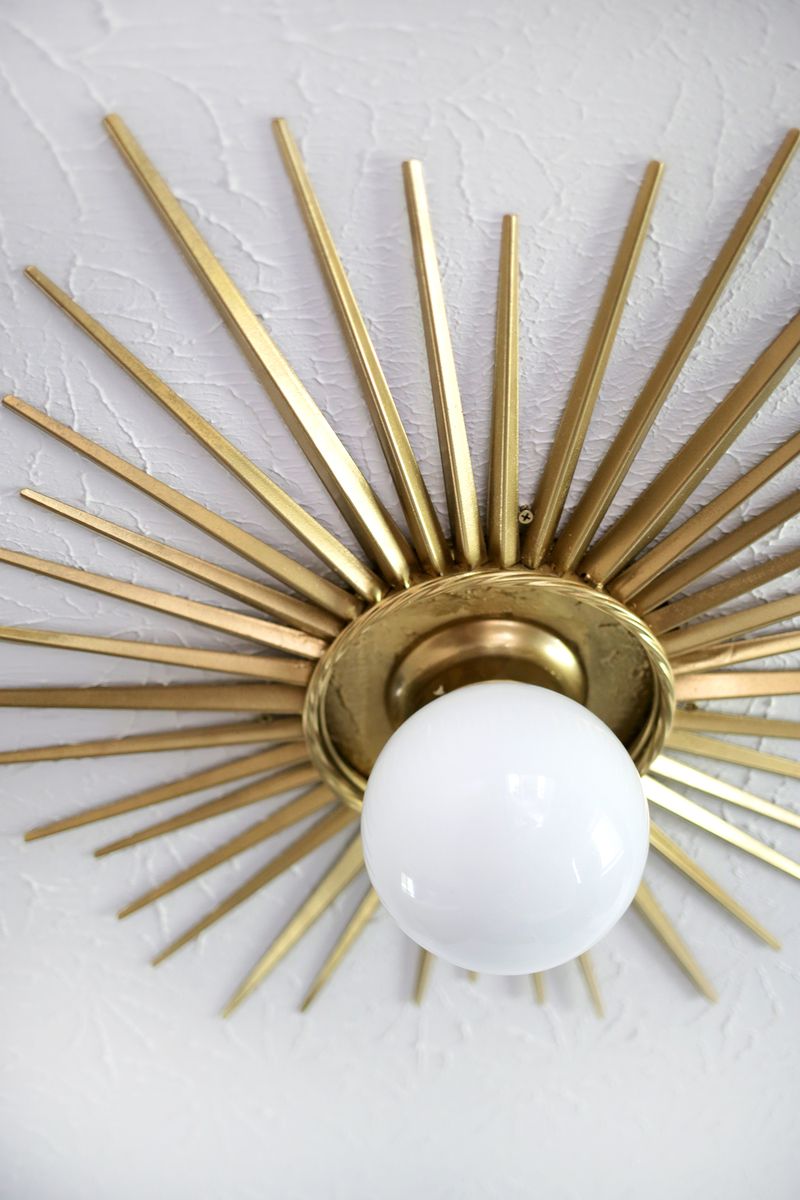 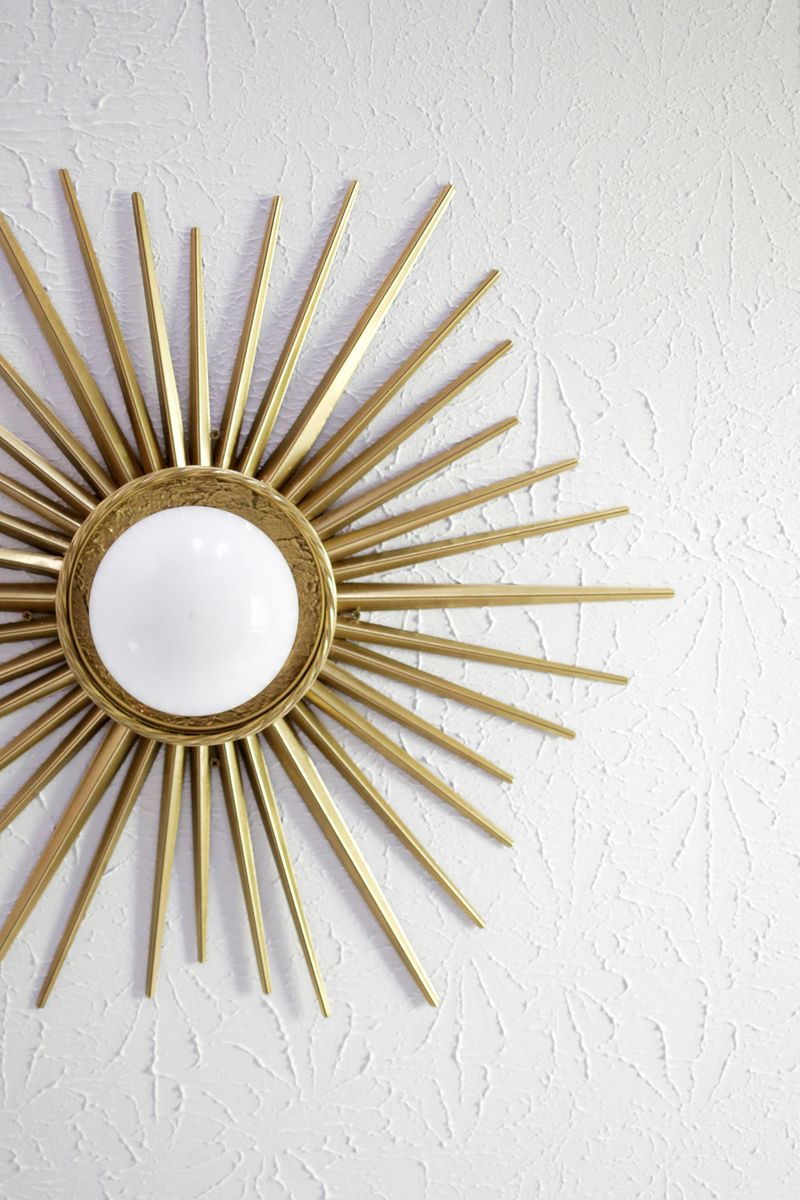 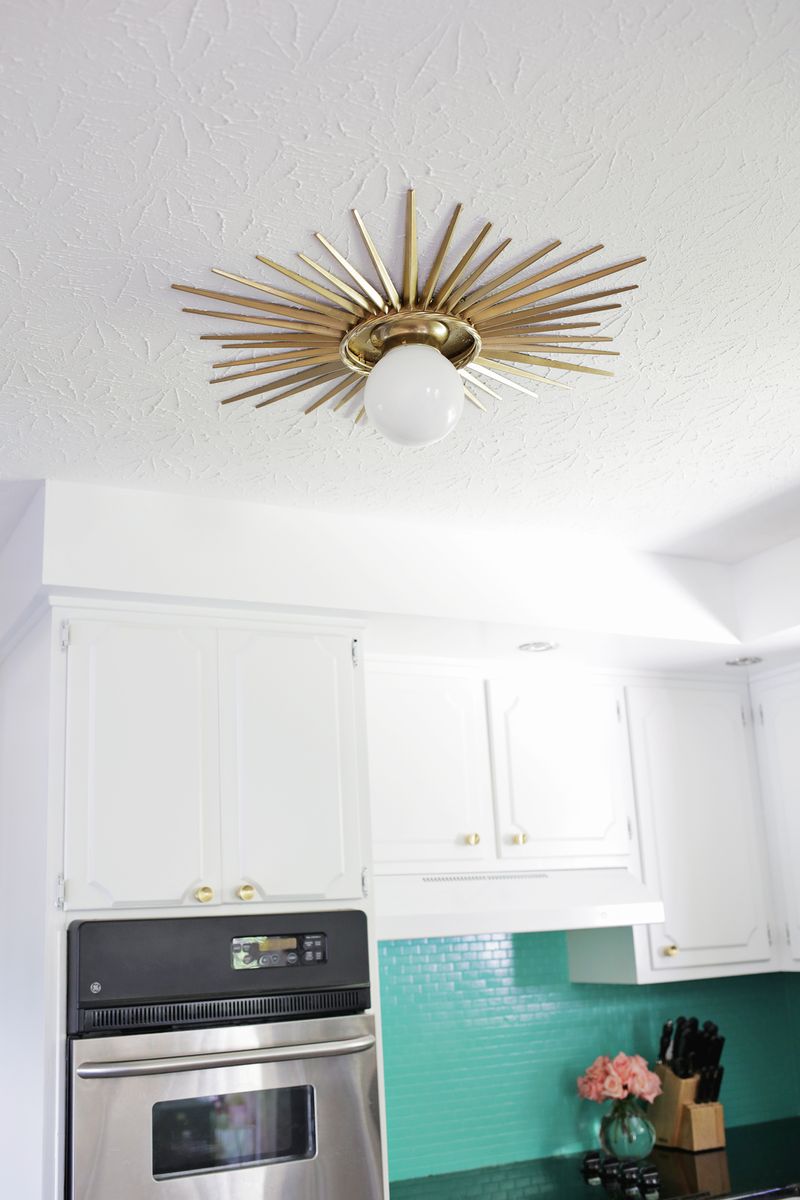 So much prettier, right?? It makes such a difference in the kitchen and adds a big dose of personality as well.

If you want a little more of a pendant look you can also go for a sputnik light like this for a little more dimension (and here are some of our favorite lights on a budget).

If you like the idea of a ceiling medallion, but this is a bit too bold for you, check out this modern starburst medallion project instead.

Either way, don’t forget when redecorating a space to look up every once in a while. There’s plenty of ways to change up your space on the ceiling too! xo. Laura

is there a more secure way to secure a starburst Frame to the ceiling? I live in CA, earthquake country. I am always super vigilant about securing everything as much as possible in our home esp with two young children. Would hate for this to fall on some one if we had a strong earthquake.

Totally just pinned this because this is exactly what I’ve been looking for! I can’t wait to try this in our kitchen!

This is so cute! I love how it turned out! I can’t wait to own a home, so I can do projects like this.

Interesting idea! I think I might do a mirror with wider sunbursts and maybe a matte paint to tone it down some, but it does make a nice statement.

Where you able to find this mirror recently? I tried to order it and it isn’t available in my area (O’Fallon, MO) or any surrounding area. When I called Home Depot customer service they couldn’t find it in their system at all. Customer Service called the manufacturer and said the mirror has been discontinued. So bummed!

Wow! amazing, love love this idea! i will love try this in my bathroom

Thanks for the great idea — I have a lovely old mirror frame that would be perfect for this! Love projects that make use of the stuff I love but can’t bear to throw out. 😀

What a genius idea! I love how awesome this turned out!

Um this light is amazing, and I need it in my life, particularly in my bedroom, asap.

I loved it and then as I was reading the how to and saw the painted ceiling part I became unsure. Then nope it was great! Love this!

What a fun/necessary way to spice up those “boob lights” on the ceiling, as my husband and I refer to them! Love it!

Ellen Ross from Ask Away

I’m cracking up at the boob light thing. we have them too! hahah
XO Ellen from Ask Away Blog

Such a fun way to add a little color and shape! So pretty!

The light looks awesome! My favorite part though – the painted tile! I knew when you showed it earlier you’d hate it (i did too!). Can’t wait to see how, tour, and how it holds up!!

So in love with this!!very pretty !

What a great, statement feature. Light fittings can be so boring, but this is gorgeous! I’m tempted to give it a go, but I doubt my skills are up to scratch!

I’m loving these home decor/DIY posts lately! My husband and I just moved into our first house and there are a lot of light fixtures that need updating, so I definitely want to try this!

You’ve done it again!!! This is such a fantastic idea! It makes a fun statement and livens up the space.

The after light looks so good! Another great DIY! (: