That Time We Gave Away a House 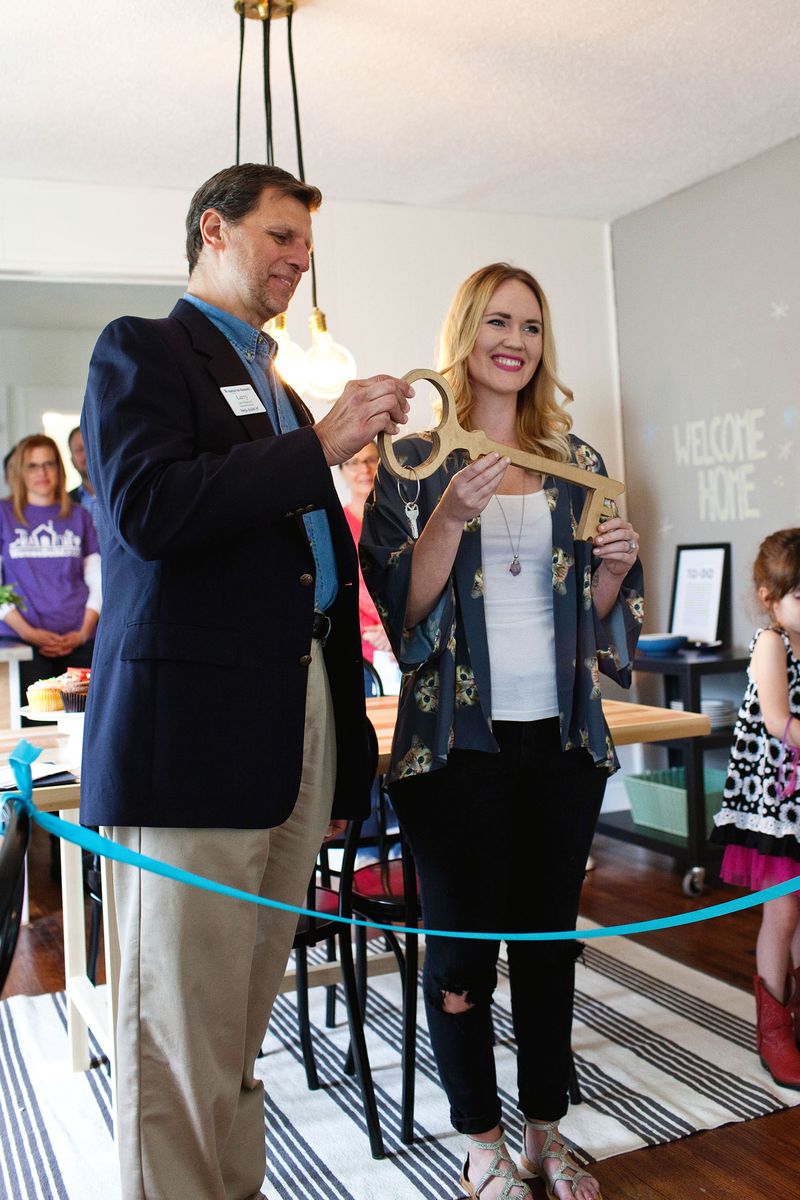 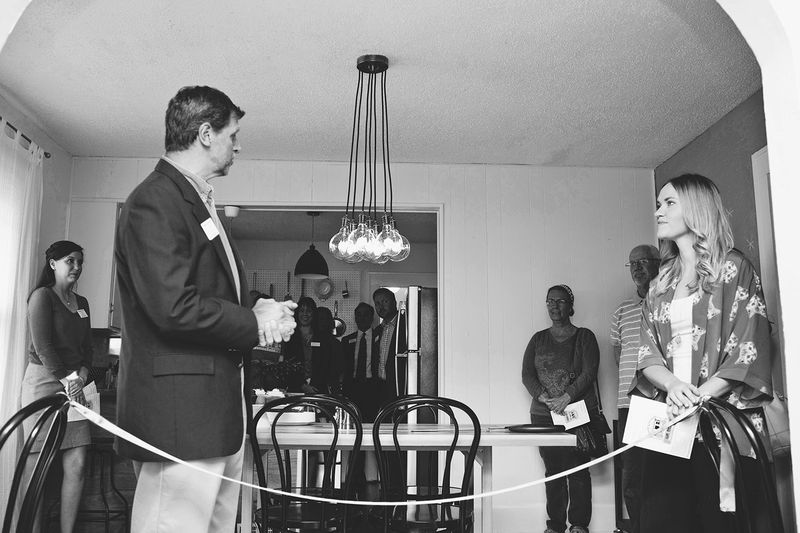 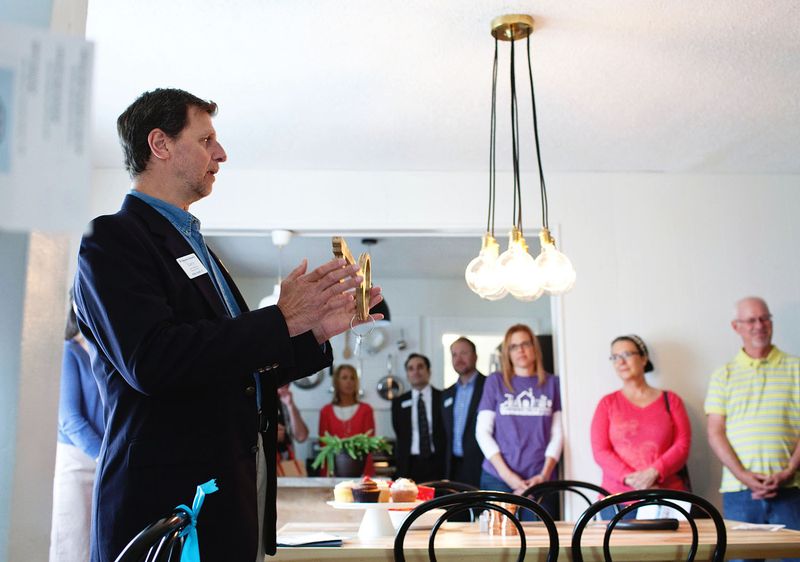 This week is just FULL of announcements apparently because here's another one. Last week we officially turned over the keys of our project house to Habitat for Humanity Springfield. So many of you have been following along since last October when we announced the project, so we wanted to give you an update on where the project is at. 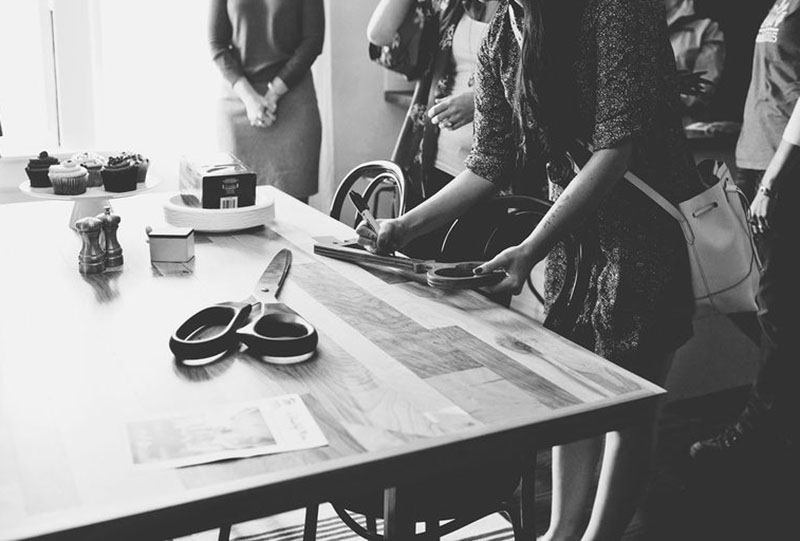 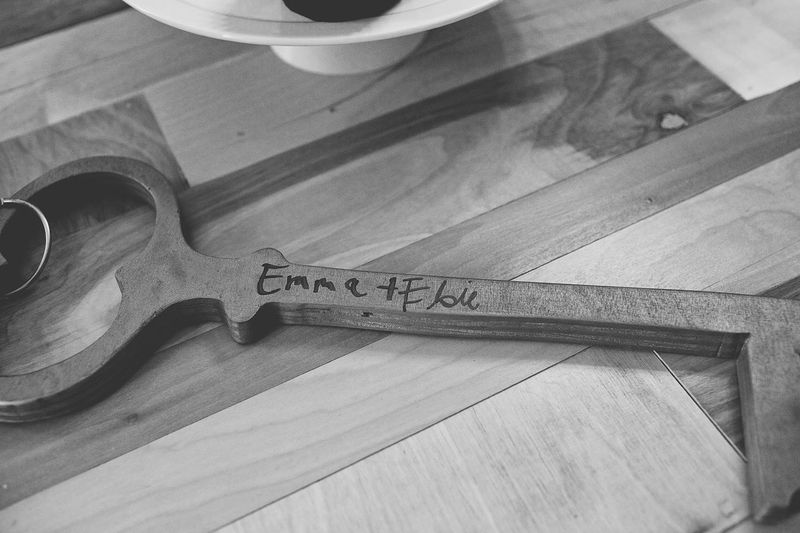 We hosted a small open house with many members of Habitat as well as the ABM team and a few friends and family members. Sadly Josh + Sarah Rhodes could not be there as they are off on their new adventure in Phoenix, but before Josh left, he made us a big wooden key for the donation day that we attached to the real keys of the property. We handed over the keys during a short ceremony. Habitat also provided us with those giant ceremony scissors that politicians are always using in movies, and our niece, Penny, was thrilled to help Aunt Elsie cut the ribbon to the house during the ceremony. 🙂 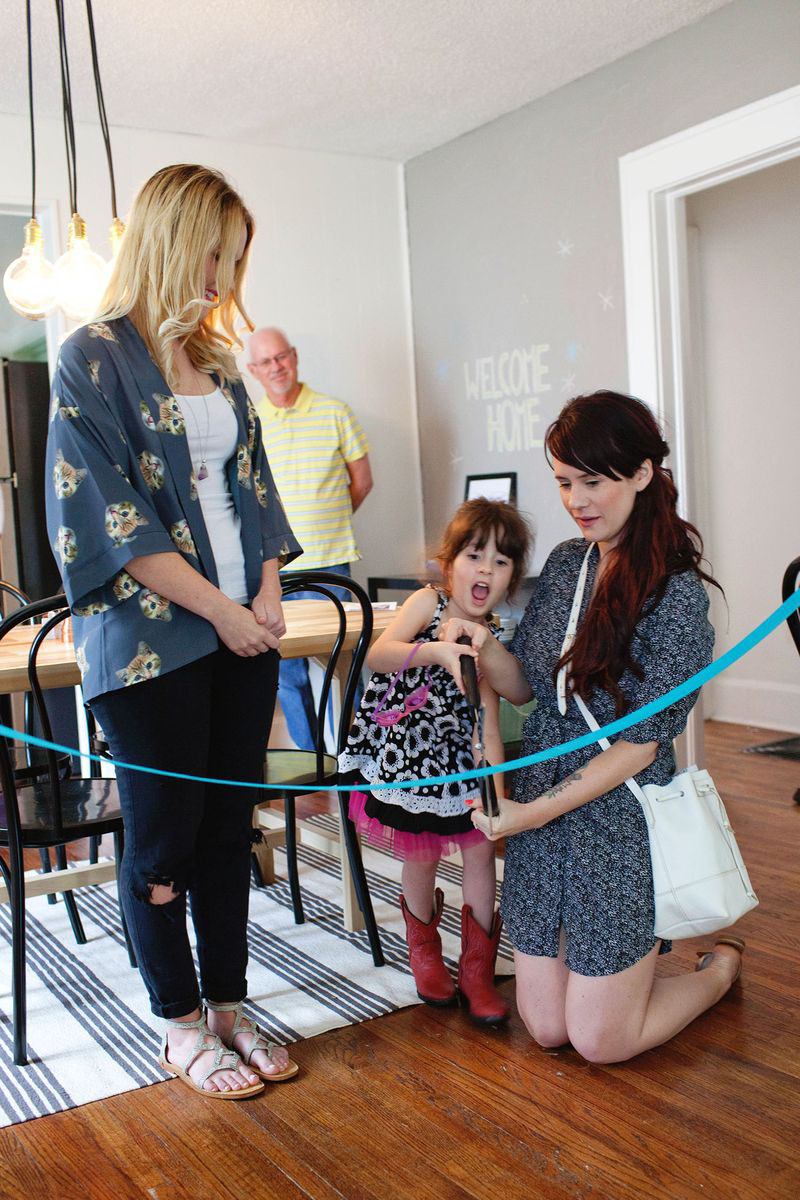 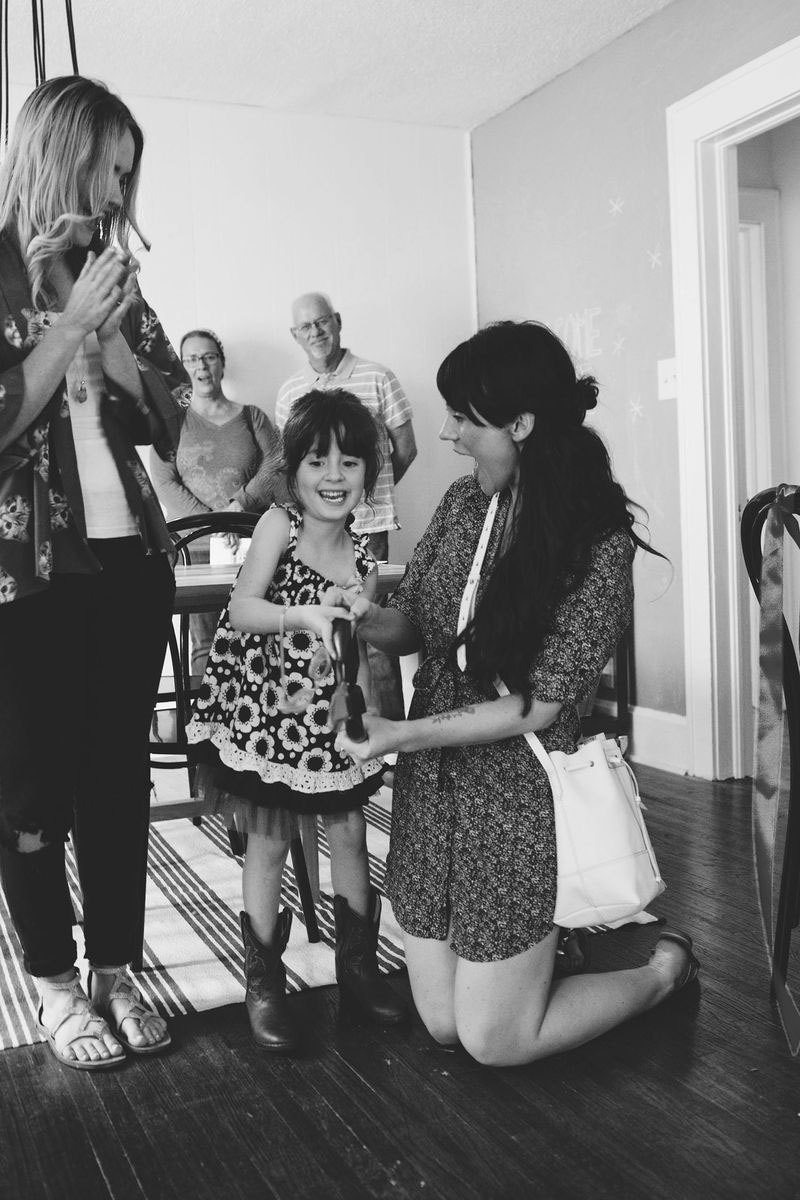 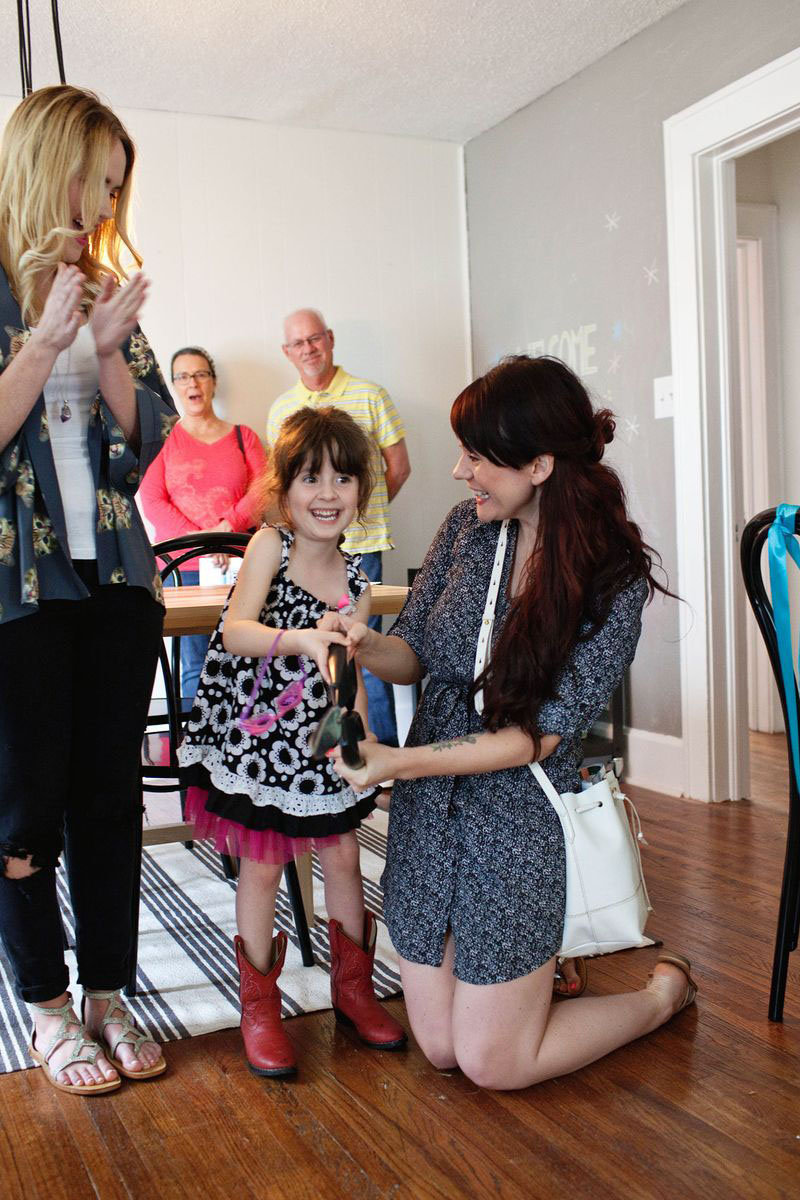 We even got to be on the local news. 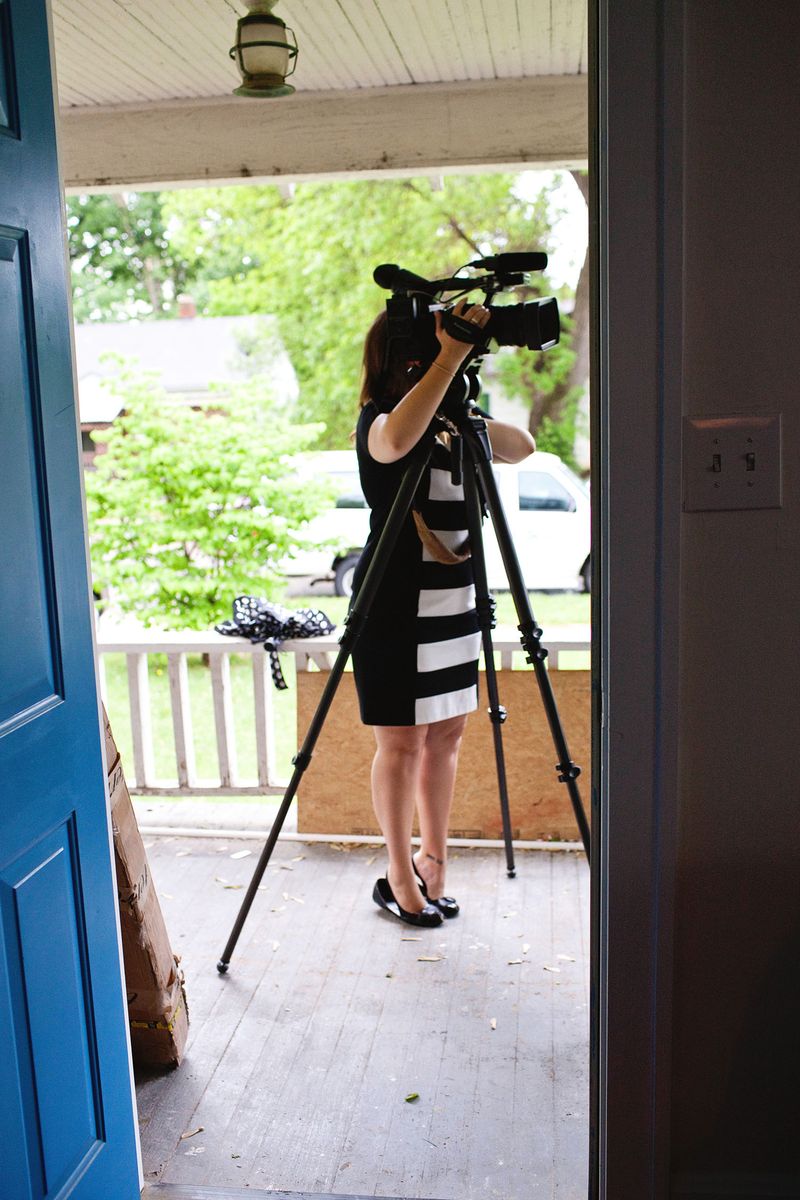 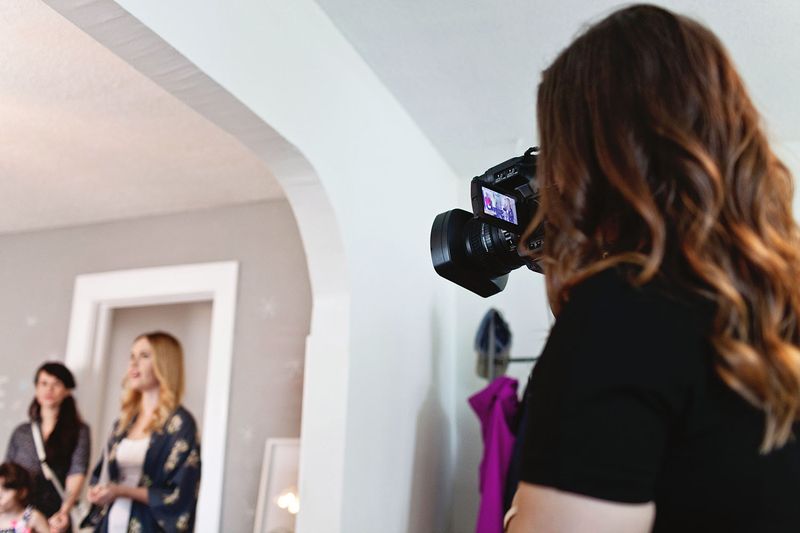 It was a thrilling moment to say the least! I kept telling Elsie that I'm going to refer to this project as "that time we gave away a house…" forever. Ha! It was such an honor to be able to give back to our city by using what resources and talents we have. I gave a super short speech at the ceremony and the first people I thanked were all of our readers because it's really because of you all and your support that we were able to bring this dream project to life. Thank you!

Now you might be wondering, "Why haven't you shown a tour of all the final room looks in the house?" Good question. During the process of this project, we were able to connect with a magazine that wanted to get involved as well. They provided the majority of the furnishings throughout the house (we did the reno + appliances). In order to work together on this project, we wanted to make sure that we didn't reveal the final looks until they are able to as well, and print moves a little slower than the ol' Internet since they have to, well, print everything first. 🙂 For this reason, we won't be sharing the final tours of the house until August—so hang tight for that! But we wanted to let you know about the official donation since we feel you all are as much a part of this project as we are. 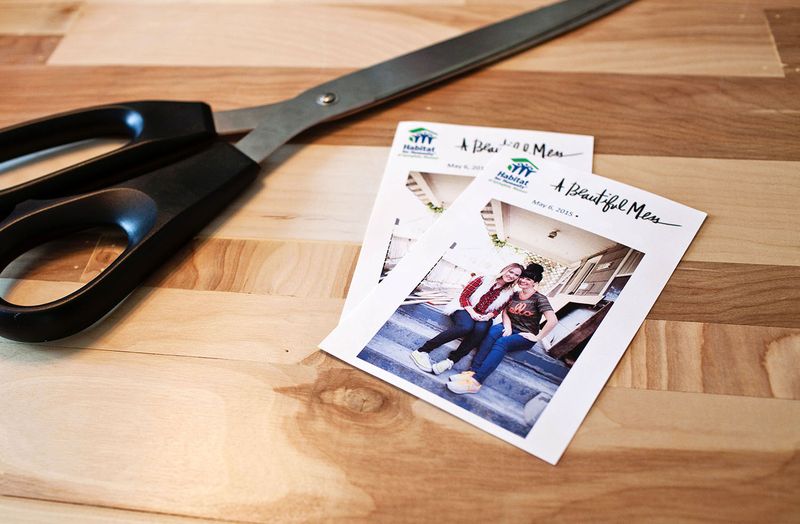 Another question you might have is, "Is a family moving in yet?" And the answer is, not yet. Habitat has their own set process that families go through before they move into their homes. You can read more about it (or give a donation) by visiting habitat.org. We're hoping that by the time we share the final looks in the home, we'll have an update for you on this as we're still in touch with our contacts at HFHS. Even though our portion of this project is complete, the story of this house is still going and we're excited to see what happens.

Thank you SO much for being a part of this project with us this year. With this project completed, Elsie and I are already dreaming about what we should do next. xo. Emma

Credits // Author: Emma Chapman, Photography: Janae Hardy. Photos edited with A Beautiful Mess actions. *Habitat homes are sold to qualifying families at a reduced price with a zero-interest loan. Mortgage payments then go into a revolving fund that allows Habitat to build additional homes for families in need. To learn more about Habitat for Humanity or to make a donation, visit habitat.org

a touch of domesticity / katie sparrow

Congratulations and high five! I just have one tiny question but I never ask it, despite always wondering, because it seems a bit personal. But here I am wondering so I thought I’d try asking anyway. You can always say it’s none of my business! We sometimes see your lovely, sweet (and well dressed!) niece Penny in pictures. But not her mom or dad. Are they private people who prefer not to be in pictures? But they’re fine about Penny? Sorry I just always wonder…

What a great project~ Thanks for the update. Now I have to ask, does your niece wear colored goggles for sunglasses ? Our grandson (almost 2yo) loves his colored goggles !

So great! Can’t wait to see the final results!
Congrats!
Also..Emma’s kitty kimono?!!? where from?!?! in love!

Congrats on the house! What an amazing opportunity you’ve provided to someone in need.
As a side note – Emma – I’m in love with your cat kimono, where’d you get it?!?

This is so awesome! You guys put in a lot of hard work, and one lucky family is going to be SO stoked! I wouldn’t mind living in that house myself…. 😉

Congrats ABM, you all rock!!!!

Amazing!! Can’t wait to see the end results! Plus find out more about the family. Whoever it is will have such a wonderful sanctuary. <3

What an amazing thing to experience! So happy for you all. Your niece looks sooo much like Elsie!

Congratulations you guys! Well done. You are such an inspiration!

Girls this is amazing, both of you are amazing! Thank you for being such an inspiration and never forgetting to give back to the community. I can’t wait to see the final photos, come August! 🙂

Oh girls, you rock so much! When you first announced that you would donate a house I found the idea very touching. I mean, ok, you have a very successful business but you also wanted to give something back to the community and that is amazing. Such a wonderful idea! Congratulations and I’m sure the new tenants will be sooo happy! Thank you for sharing.xoxo
(PS. Who chose Penny’s outfit?It’s brilliant! Cowboy boots worn by an 8(?)year old girl? WOW)

I love that you did this project, what an amazing achievement! I really hope they choose to sell it to a Habitat family, rather than sell it to the public and put the money back into the program. I know that they have to do what will make the most money for their program, but this home that you worked so hard on should go to someone who truly needs it, someone that has worked so hard to get a new lease on life. I have volunteered for builds in the past, and will again in the future, but my favorite part of Habitat right now is the store they run for salvage and donations, and all the amazing things you can find to use for DIY projects at a great price. 🙂 Thanks guys, you have definitely made our world a little better!

Congratulations girls! It’s amazing to see how the internet can make you achieve so much! You girls are inspiring! I hope I could be as successful as y’all one day!

Congratulations! Such an amazing and inspiring project, you guys are amazing!

So amazing! Congrats! Warms my heart that you put your skills and talents towards such a great cause. YOU GUYS ROCK!

This is so fun. I cannot wait to see the final showing.

I love that you ladies did this so much! I will eagerly await August!

Congratulations! What an accomplishment! I can’t wait to see the house tour!
xo Allison