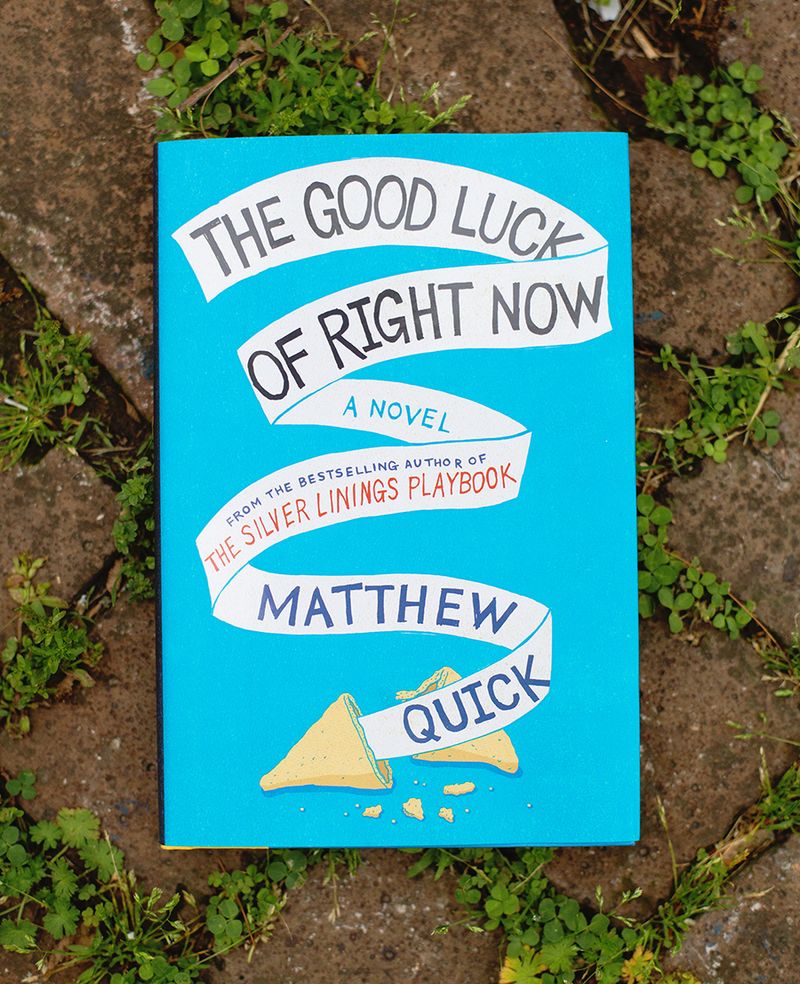 A good friend of mine had recommended reading The Silver Linings Playbook. But since I had already seen the film version, I wasn't sure if it would be as good to me. Sometimes I really like not having the film actors' faces in my mind as I read a book. You know? Anyway, I was excited to discover that the same author, Matthew Quick, had a new book out, so that's what prompted this month's selection.

I enjoyed this book, although I thought it had that thing where it feels like nothing happens for the first half of the book and then everything happens during the second half. It took me a little bit to get into the story because of this. Also, it's written as a series of letters, which I liked. But it's a series of letters between a grown man and Richard Gere, an actor he admires but does not know personally, which at times feels just a little off. Also, based on Bartholomew's current life (living with his mother, with no job and no past job) and some of the stories he shares from his childhood as the book progresses, you get the feeling that something may be just a little bit off about Bartholomew. This can be sort of tough, as a reader, because I'm not sure how much I should trust the protagonist. Is the story he's describing to me completely accurate, or does he have an alternative view of the world so his story is not entirely true?

I will say, though, no matter what challenges Bartholomew faces in his life, I could still identify with him when he struggled with the little man in his stomach who often called him a "retard" or other derogatory terms. I know I deal with self-doubt, sometimes a lot. And my guess is most people do in some capacity. I sometimes feel similar to Bartholomew; I have a little, angry man inside me who constantly doubts my decisions and ideas. And this makes it hard to be confident at times.

Remember, if you haven't completed the book yet, you might hold off on reading the discussion questions below (and responses) as there may be SPOILERS. In case you care about that sort of thing. You can use these number prompts/questions as a jumping-off point to discuss. Or you can add in whatever thoughts you'd prefer to the comments below.

1. What about you? Do you ever struggle with self-doubt (a.k.a. the little angry man in your stomach)?

2. Did you find the characters in this story believable? We had a bipolar priest who loses his faith, a troubled man obsessed with cats who believes his sister was abducted by aliens, a young woman who had a terrible-sounding mother (feeding her daughter her own pet rabbits for a meal) and then experiences a lot of violence as an adult, and Bartholomew and his imaginary friend Richard Gere. Was it all too much for you? Or did you find the characters believable and charming?

3. Father McNamee is one of those characters who can only be described as complicated, right? He's done so much good with his life, being a priest and seeking to help others as much as he can. But then we also find out he abandoned his family for this "selfless" life. What do you make of that?

5. What did you think of Max's assessment of Cat Parliament—the idea that these cats don't contribute anything important to society anymore but people still take care of them? Of course it's hard not to recognize how Max might think he and his sister (and perhaps Bartholomew) are like those cats. But also, what do you think of this idea anyway; is it kind or just mindless charity?

Don't forget in July we will be reading #GIRLBOSS, and Elsie will be our moderator. We both have already read this book and loved it! So we can't wait to see what you all think about that next month. 🙂 xo. Emma