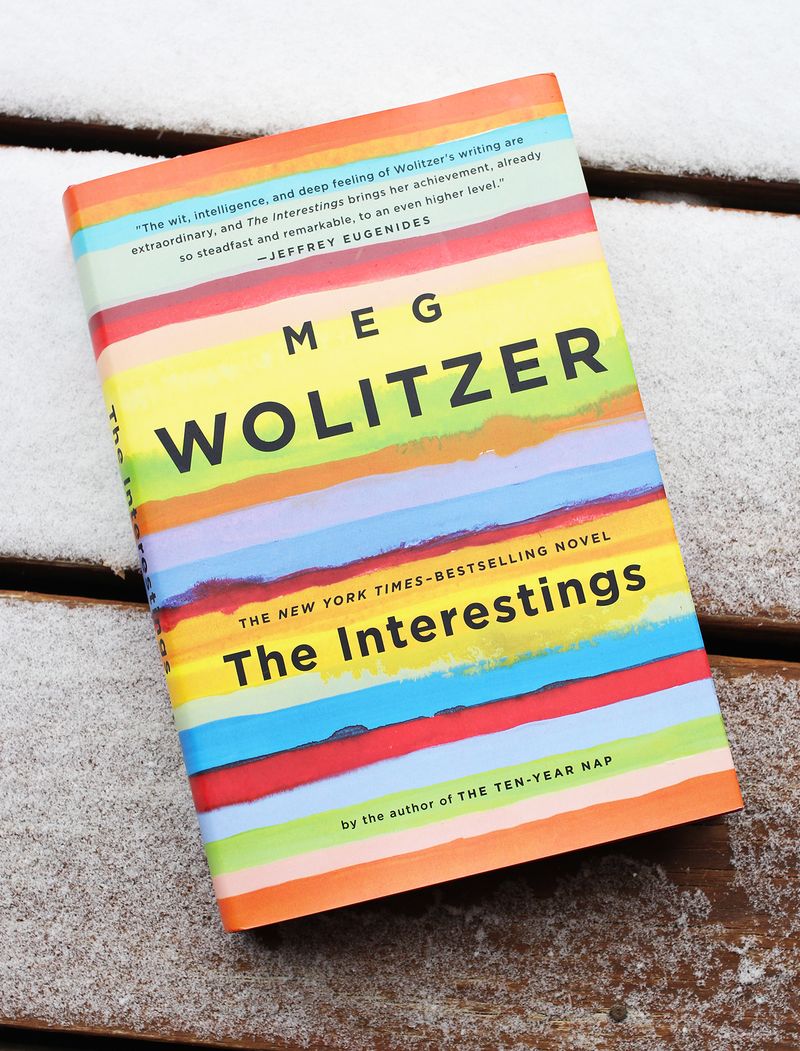 Welcome to the very first ABM Book Club discussion. We’re making history today guys! First off I wanted to say THANK YOU to everyone who has already left comments, emailed or shown their support on IG. I was actually pretty nervous that no one would join in and I’d look like that dorky lonely girl clutching her book during lunch at school. You know what I mean? Anyway, thanks for joining and agreeing that yes, indeed, reading is way cool.

So, The Interestings was pretty awesome, right?! I’m going to throw out a few topics for discussion. I may (or may not) add my two cents to each, but I’d love to hear what you thought. Please chime in and if you’d like to reference the discussion point by number feel free. If there’s something you wanted to discuss that’s not listed you’re welcome to start a new point of discussion as well.  If you want to respond to something another commenter said just hit “reply.”

(Also, yes, this has spoilers! So, if you’re not done reading yet you might hold off on reading the discussion points below.)

1.) Jules’ (aka Julie’s) name changed once she attended her first summer at Spirit in the Woods. Do you think she changed too? If so, in what way(s)?

2.) One big theme from the book is the idea of classism, or at least feeling like you identify with one class in society and not others. What are your thoughts on this?

-Jules feels out of place and lucky to be invited into the Wolf family partly because they are in a higher (and therefore, to her) better class than her. I really liked the scene where Jules is talking to her sister at the end of the book and asks if her sister was ever jealous of her. Jules assumes her sister was jealous, since she obviously had a more interesting life with higher class friends. While her sister is surprised she ever thought that, because she was never jealous. Maybe classes only exist to those who care?

-I really like how the book explores the friendship between a lower income family (Jules and Dennis) and an extremely wealthy family (Ash and Ethan). They have awkward moments, for sure, but I like that none of them (aside from sometimes Jules, more on that in the next point) really seem to care.

Ash and Ethan embody the two extremes from the upper class: old money and new money. I think it’s interesting that Ash seems to be more inherently entitled and blind to her and her families wrongs, while Ethan is described as the morally fair and upright character in the book.

I really loved and sometimes identified with this character. I also feel like what I learned from her most was a life lived jealously is such a waste of time. She makes herself (and her husband) so unhappy with her jealousy of Ash and Ethan’s life, even though she obviously loves them both a great deal. I also think it’s interesting that Jules is the only one feeling disappointed by her life, while Dennis and Rory seem perfectly happy with their home, how much money their household has, etc. It seems that jealousy makes you discontent when you really don’t need to be.

4.) Art. Most of the main characters in this book consider themselves creative and most of them pursue artistic careers. What do you think about that?

I loved watching Ethan’s success. You meet his character as a boy who is just filling up notebook after notebook with doodles, dreaming of being an illustrator in some capacity. He also created Figland originally as a way for his teenage self to deal with his parents divorce. I love that he used art as an escape and a outlet for the difficult and complicated things he encountered in life. He found a productive and positive way to deal with his hardships. I love that.

Jules discovers this world of creative kids when she first attends Spirit in the Woods after her father as passed away when she’s a teenager. She falls in love with this world and wants to be a part of it. She tries to have a career in comedic acting but it doesn’t ultimately work out. She becomes a social worker and seems to be pretty good at it. Later in life she has the opportunity to return to the world of Spirit in the Woods to run the camp with her husband. They quit their jobs, leave the city and give it a shot. She ends up feeling disappointed about the experience and not renewing their post after the first summer. The whole scene where Dennis spells out why he thinks she is disappointed by the experience I think is just so good.

Jonah I think is the most tragic character with regard to “art.” He feels his art was stolen from him as a child because of the whole Barry Grimes thing. And I agree, he was stolen from and just, frankly, abused through that relationship. I think Barry deserved a lot of jail time for his actions rather than the mediocre career he gets out of it. But anyway, because of this Jonah gives up on music and goes into robotics. By the time he’s in his 40s he realizes he has really missed music all his life. Ethan encourages him to just do it for fun, just play music with anyone/for anyone. Jonah does, and he seems much happier for it. I love that even though maybe Jonah could have had a successful career in music by the time he realizes (or maybe admits) that he even wants that he is well into another career and he feels perhaps the time to pursue that has already passed. So he does it for fun-and he’s content with that. I love it. Art doesn’t have to be your career for it to be a meaningful and awesome part of your life. Just do it. Like Jonah.

First, what a cool name that is wasted on such a bad character. Here’s an example of a rich kid getting away with a crime if there ever was one. Based on what Cathy told Jules, and the fact that Goodman did flee, I think it’s pretty safe to say that he did rape Cathy. But instead of jail time he instead receives a life abroad supported by his parents and then his sister Ash with her husband’s money.

Although it’s perhaps a cliche, I really like that the book has Goodman starting out this absolutely beautiful and much loved/admired character and then by the end of the book he is this old, ugly, has nothing without the charity of his family, wreaked human being. It’s fitting, I guess poetic justice? Is that what that saying means?

It’s so sad/disgusting that he not only wreaked Cathy’s adolescence, but he also very nearly ends Ash and Ethan’s marriage by his life and willingness to accept his families support over the years. I think Ethan was right, Ash did choose her family over him by keeping the secret all those years. But I don’t think that makes their marriage unrepairable. And in the end, they did reconcile.

Ok, I’ll stop rambling for now (I’ll probably continue in the comments). What did you all think of the book? xo. Emma