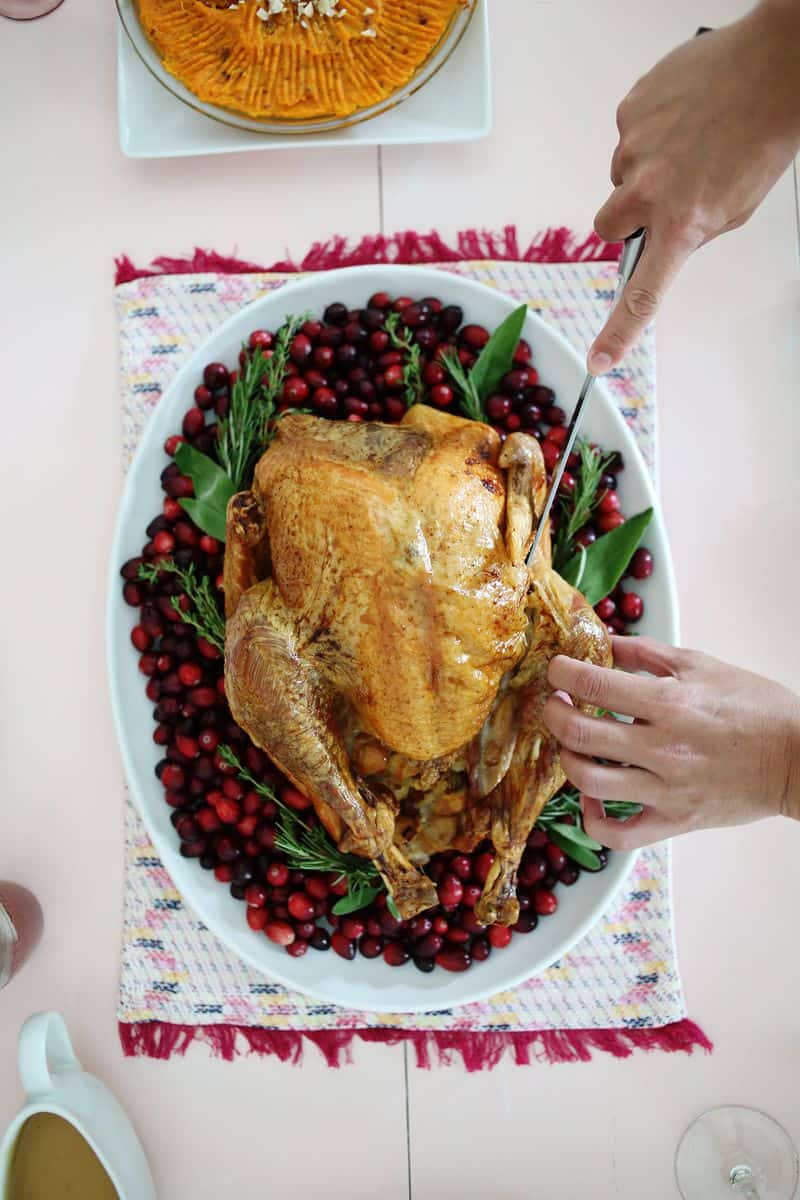 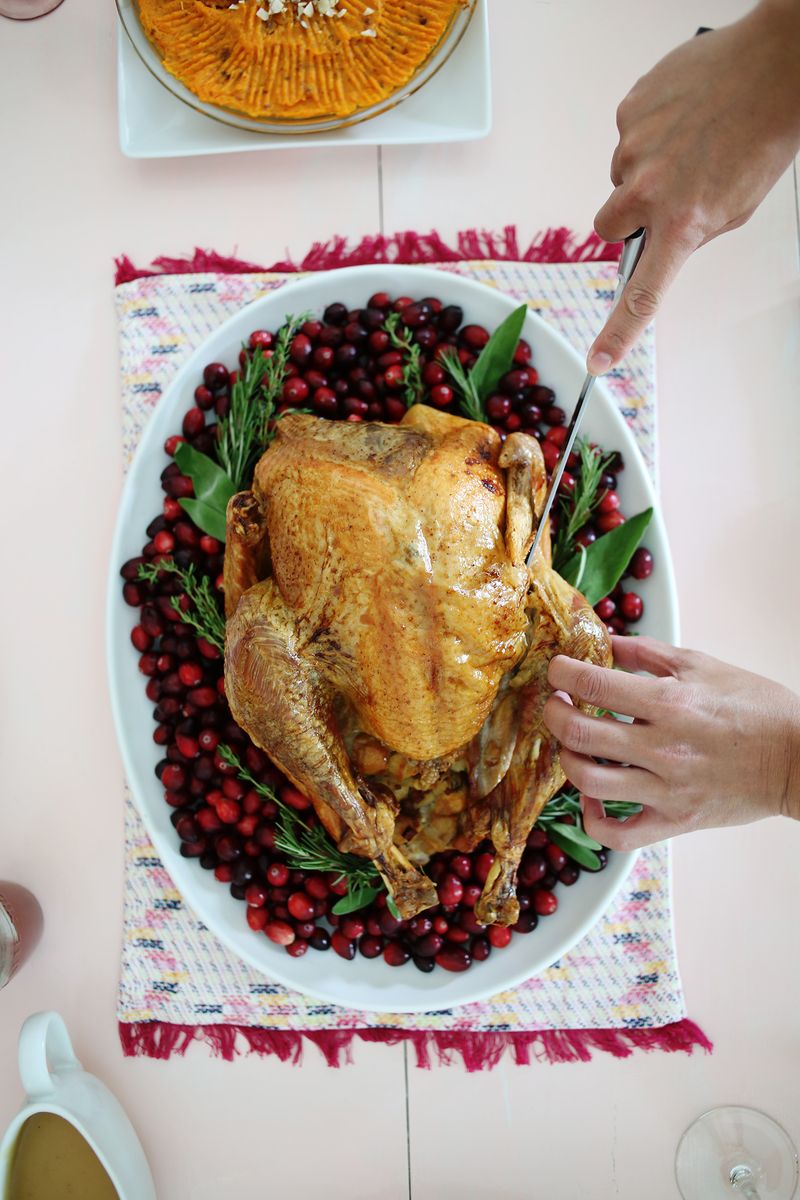 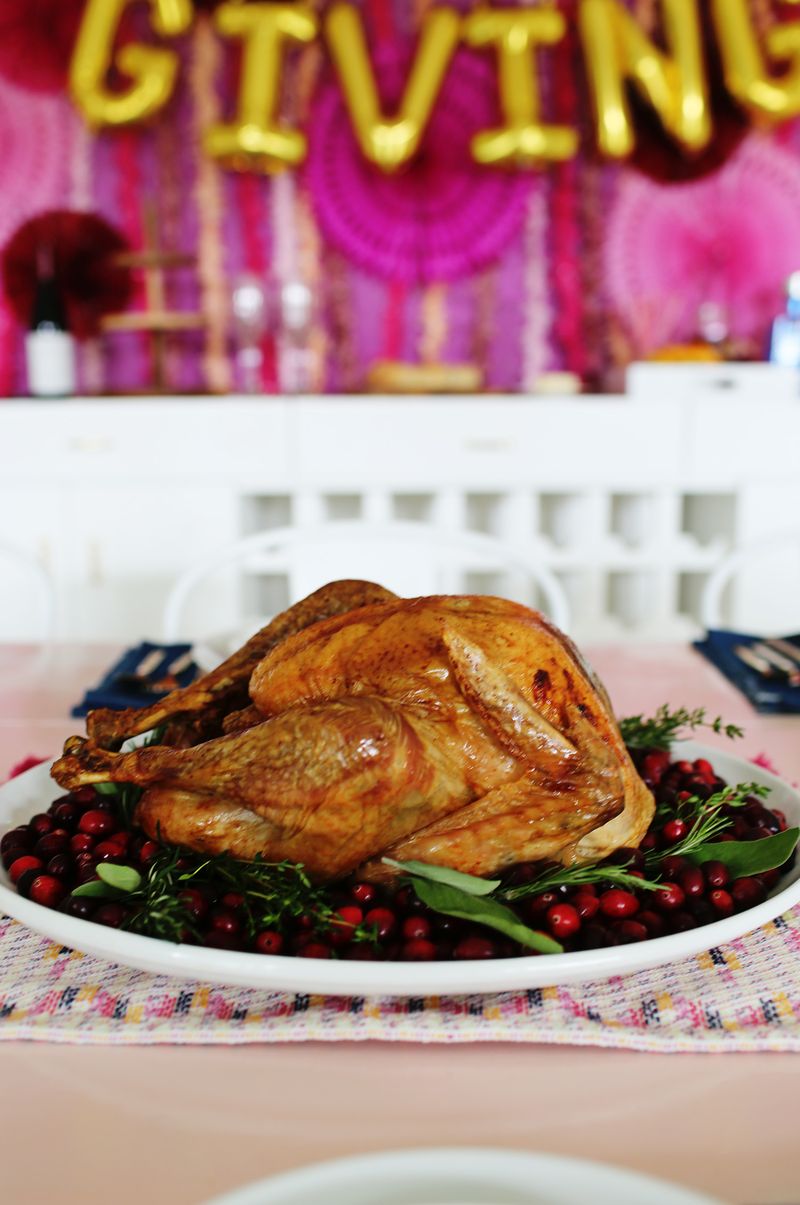 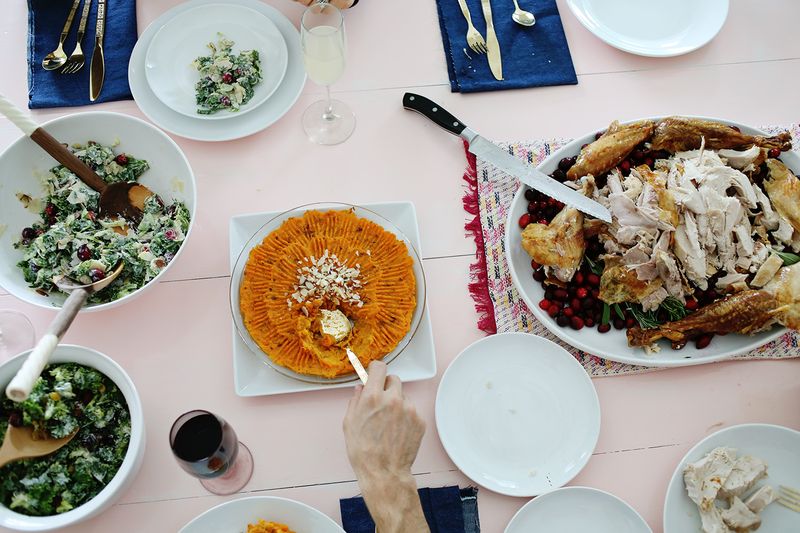 Friendsgiving is my favorite post(s) of the year here on ABM. I love cooking. I love photographing food. And I love hanging out with friends. I will say though that doing all of those things at once can be a touch overwhelming. I love hosting the meal, but I do always worry in the back of my mind if we’ll have enough food, or if the turkey will be done in time, etc. I suspect that many of you who will be hosting a big meal this year share lots of the same concerns. I must admit that this year I was really feeling like, “I got this.” Cooking a big meal was feeling pretty easy…and then I got thrown a curve ball.

I drove down to Nashville on a Saturday, knowing that we were set to host our event that Monday. With a family vacation happening right after this, it just turned out to be the best date for everyone involved. So Elsie and I went for it. I had already practiced all my recipes. (Except the turkey because I just can’t eat a whole turkey. I hate to waste it, so I just don’t practice it…I wing it. Ha! Pun!) I drove down with a cooler of my supplies and lots of baking and cooking gear in my car. Elsie had bought the turkey and it was thawing out in Nashville the day before I arrived (more on that in a minute).

So upon arriving, I learned that Elsie’s new oven doesn’t have racks. I mean it has racks, but the piece that holds the racks in place is missing. The company is rushing it to us, but it won’t arrive until sometime on Monday, and the turkey has to start baking around 8:30am that morning…so that’s not going to work. The alarms in my brain go off! Danger! Danger! You don’t have an oven and almost all your recipes need one! You’re in trouble! Friendsgiving is ruined!!!!!!!!!!!!!!

And then I calmed down. I started thinking about grilling or smoking our turkey this year because I’ve been wanting to try that anyway. But with little time to plan and everything being closed on Sunday, this proved to be a bad plan. So I decided we’d just try to “rig” the oven racks, test it on a dish that day, and if it didn’t work, reevaluate the plan. We bought four metal loaf pans and set those on the bottom of Elsie’s oven (the heating coils are located on the top) then we set the rack on top of the loaf pans. I baked something. Nothing caught fire, smoked, or otherwise seemed to be ruining her oven or what I was baking. And that’s how four metal loaf pans saved Friendsgiving this year. Ha! 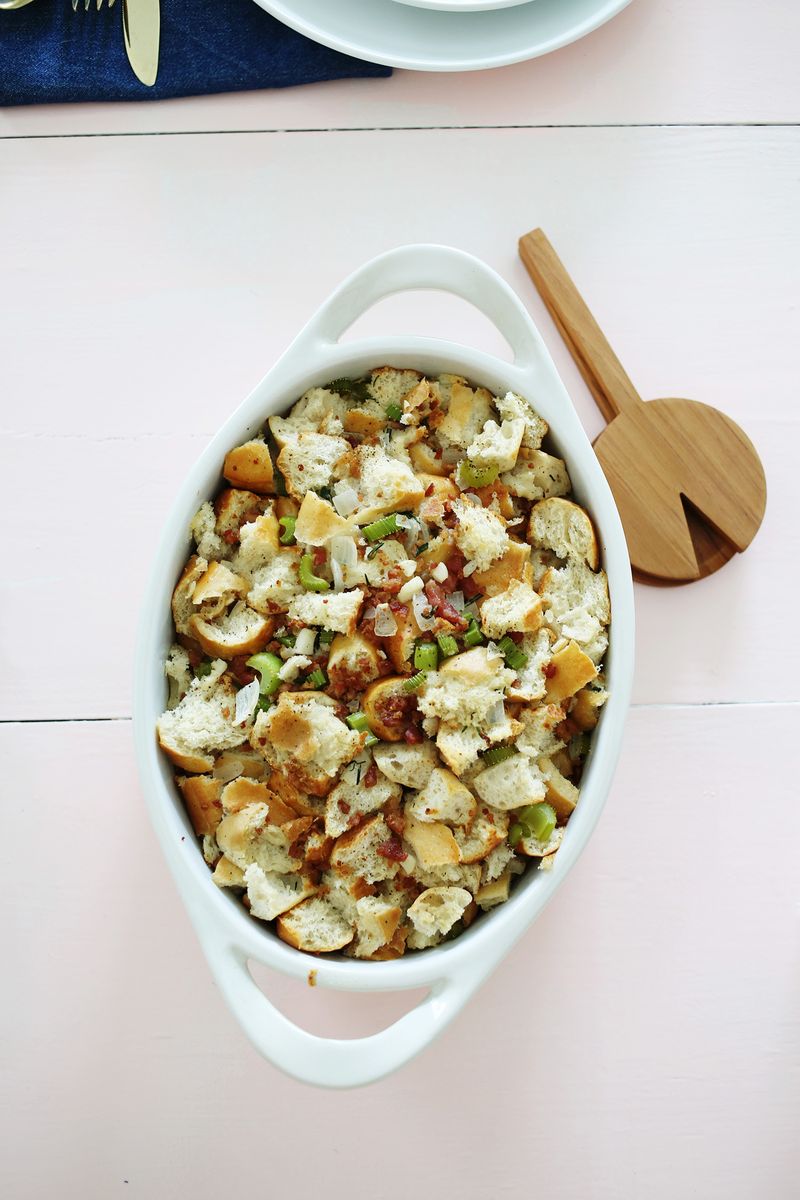 A few things were different about our turkey this year:

1. We had to buy a frozen turkey instead of fresh because we were too early. I called two turkey farms in my hometown just to see if they could get me one early, but they could not. I was about a month early, so I can’t really blame them. But this meant that our 12lb turkey had to thaw in the refrigerator for three days and it ended up not being completely thawed the night before. So I frantically googled around trying to figure out what to do when your turkey doesn’t thaw in time. In the end, I decided to try running cool water over the bird (still in its package) in the sink for about an hour and luckily that did the trick.

2. I decided to skip brining this year. Every year I brine the bird, and so I just wanted to see if it made a big difference if I didn’t. My conclusion: I think brining is a little better. Go figure. If you want to read about how I’ve brined past Friendsgiving birds, you can read about them here: Year 1 / Year 2 / Year 3. I’d have to say that year 2 is probably my favorite so far.

3. I also decided to try stuffing the bird this year (with bread stuffing). I had never tried this before, so again, just experimenting. My conclusion based on observed data (aka what everyone ate): the stuffing cooked in a casserole dish was preferred to the stuffing that was baked inside the bird. I tried a little of both, and I too preferred the casserole dish stuffing. I like the crispy bits and also I thought the bird stuffing was too moist for my liking. I like a slightly drier stuffing so I can pour gravy on it. 🙂 For our stuffing, I simply used a slight variation of this recipe, but omitted the apples, bourbon and eggs. I only needed a small amount to stuff the bird with and the rest I put in a small casserole pan. 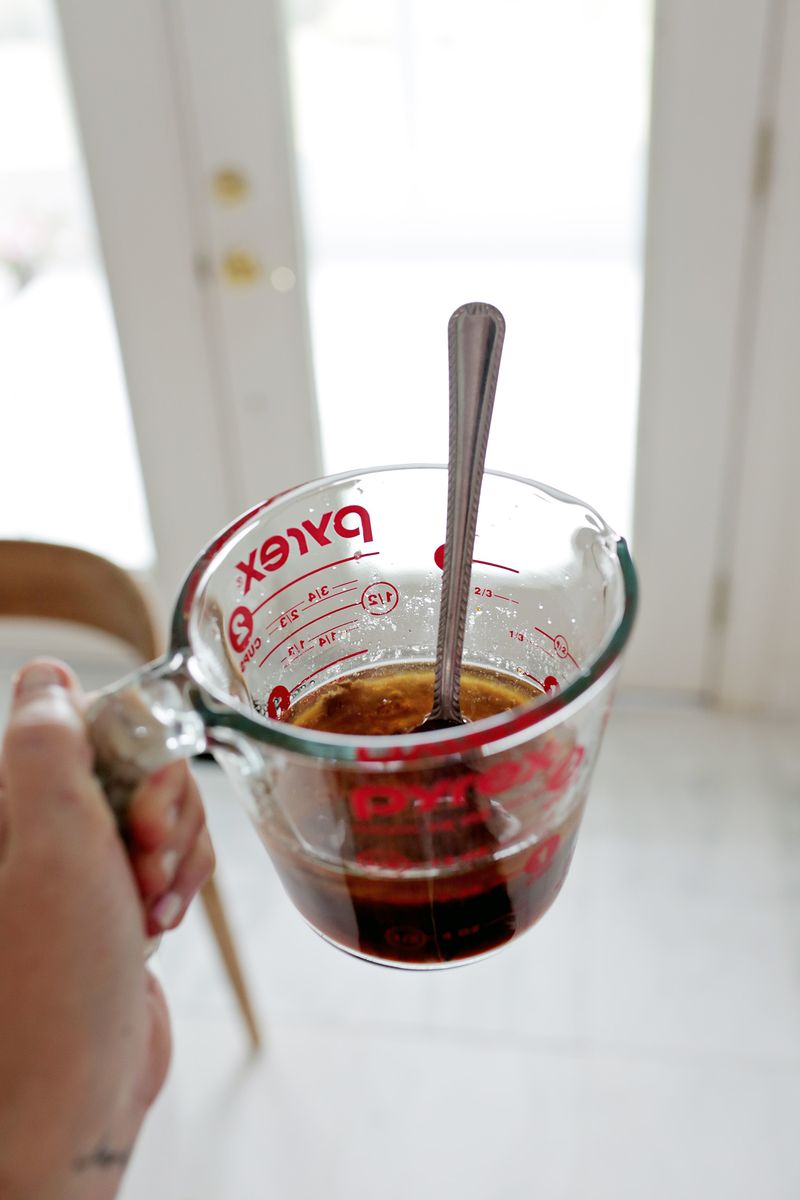 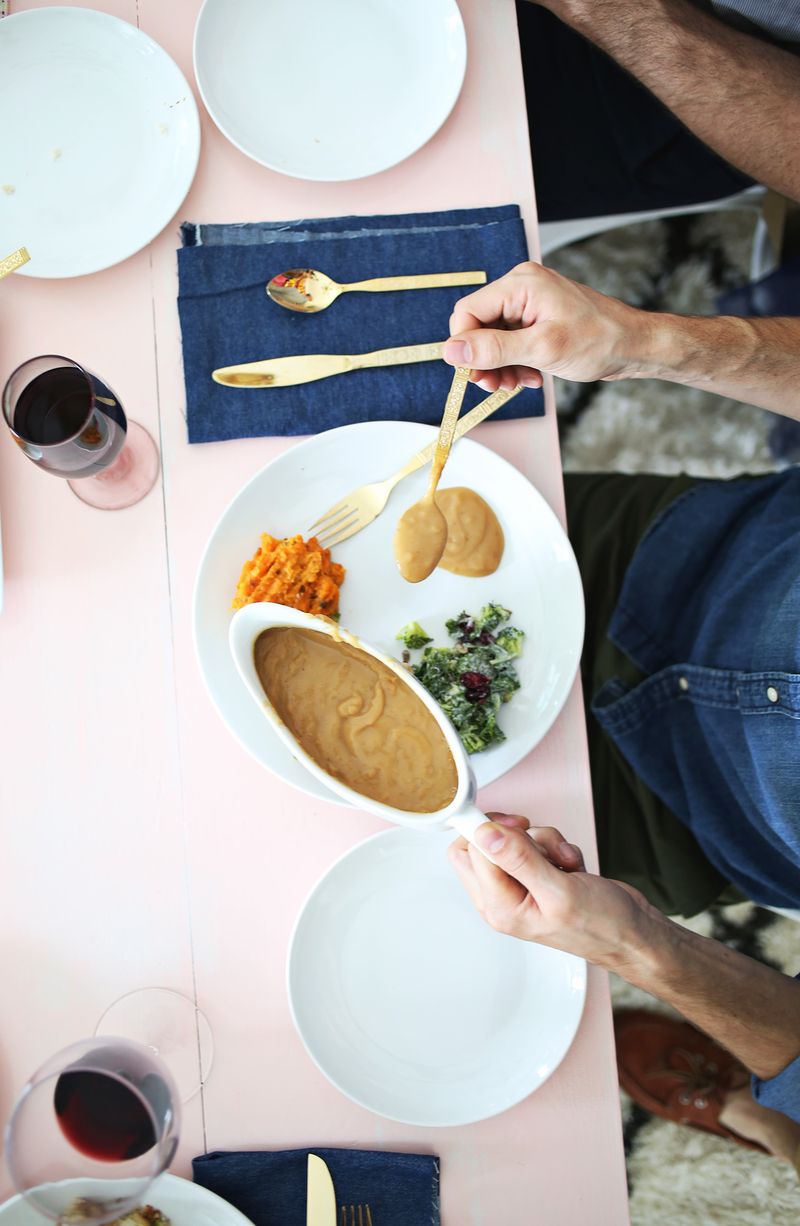 Oh yes, turkey gravy. Oh how I missed you. As a mostly vegetarian throughout the year, it might surprise you to know that one of my very favorite things about this time of year is turkey gravy. It’s just SO good. You can read my foolproof method for making gravy here. (Spoiler: it’s super simple.) 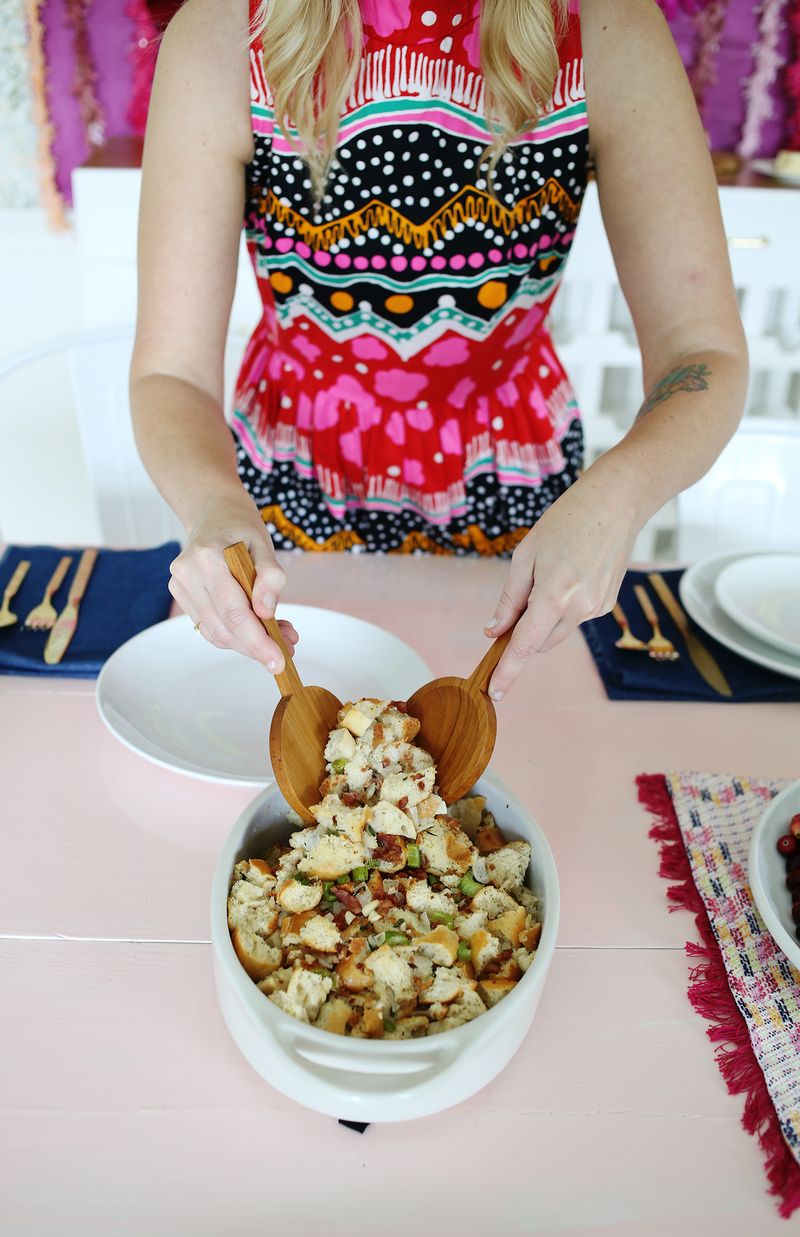 So that’s the story of this year’s turkey, stuffing and gravy situation. I thought I’d have more recipes to share, but like I said, I just wasn’t wowed by this one this year. It was good, we ate it all, believe me, but I like to only share my very best here on ABM. But stay tuned because I do have lots of other great Thanksgiving recipes for you coming this week and next. 🙂 xo. Emma

This looks delicious! I’m so excited about Thanksgiving!
Kari
www.sweetteasweetie.com

Thanks for answering this question Emma as I was wondering myself. I freaked out when I saw your dress in these pictures as I have one myself (except mine has orange tones where yours has pinks). Considering I bought mine at a vintage fair in Melbourne, Australia and was told it was from the 70s (it wasn’t cheap either) I was very keen to know about your dress.

My dress has a label that says Sadie for I.Magnin & co Seems I may have gotten ripped off but I don’t care because I love it! Yours is gorgeous too and clearly I think you have great taste! ??

The bamboo stuffing servers are so pretty! Where did you all get them from?

This turkey/stuffing looks amazing! Stuffing is always my favorite part of the meal!
Paige
http://thehappyflammily.com

I love how real this is. Beautiful and special still. Thank you. Integrity wins!

What a crazy adventure! Thanks for the recipe and for the story! I love it when you guys share a bit about what was happening behind the photos!

Turkey and stuffing is my favorite. I mean, it’s basically everyone’s favorite, right? And because there are so many methods to cooking them it’s super helpful that you’re trying different ways and ruling out the blahs for us! Thank you!

Emma, I feel like you’re being too hard on yourself and I am sure your friends would agree! I never stuff my bird, by the time the stuffing reaches a food safe temp your bird will be over cooked! It flies in the face of my grandma’s long standing tradition of stuffing the bird, but last year, I cooked everything for my family, and no one missed the bird stuffing! I feel like cooking is always trial and error and I say the mark of a good cook isn’t someone who can follow a recipe line by line, but can keep on their toes and adapt when things start to go wrong! 🙂

Turkey gravy is also my favorite thing. I could almost do without the turkey, just as long as I have the gravy for stuffing and mashed potatoes! I absolutely love how that turkey looks served on a bed of cranberries. Beautiful!

I love this <3 It takes guts to say it wasn’t the best this time around. For me, mistakes are where I learn the most and it makes me feel a lot better that even with tons of experience and know how, that doesn’t exempt anyone from having “meh” turnouts sometime.

I bet next year will be phenomenal! And, you have beautiful pictures to show for this year regardless. Thanks for sharing your successes as well as learning experiences 🙂

It’s vintage Neiman Marcus (has an old tag in it but I’m not sure how old). I spotted it thrifting one very lucky day. 🙂

Thank you! I thought it was a weird choice since it’s sleeveless (and it’s getting colder) but I had only gotten to wear it on one other occasion so I just went for it before winter really sets in. 🙂

It’s nice to see you “think on the fly” and admit to feeling the overwhelm as well. I LOVE hosting, but it stresses me OUT! 😉

Also, let me echo the sentiment that everyone else is saying: your DRESS! I love it!

Thank you for this recipe, it sounds wonderful!
https://www.makeandmess.com/

Tell us where you got that dress, Emma!

Oh my gosh! The turkey makes me can’t wait for the thanksgiving family dinner!!! I love it so much!

Food looks amazing and the print on your dress is so much fun! Love it!

Wow sounds like quite the fiasco! I’m glad you guys stayed calm and thought of solutions, looks like everything turned out ok! I can’t wait for my own Friendsgiving!