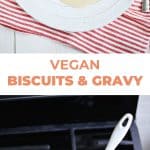 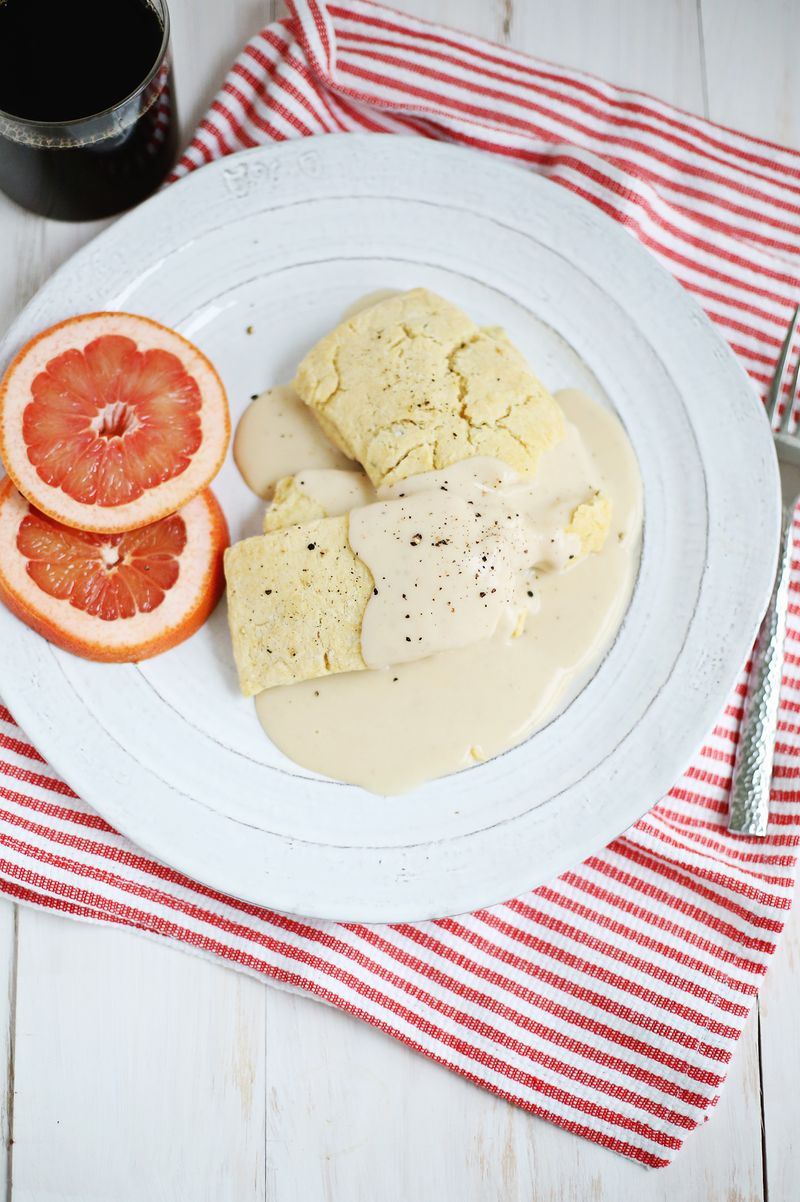 Now you might be thinking, “Emma, are you vegan?” or, “Are you going vegan on us?”

No. I’m not vegan (although I did try it for six months right after college). And I don’t plan to go 100% vegan anytime in the near future. But, eating vegan is awesome, and I highly recommend we all try to do more of it, even if we aren’t going to do it all the time. It’s good for you, more sustainable for the environment, and truly very delicious. I really love Mark Bittman’s thought on being vegan part-time. Into it! 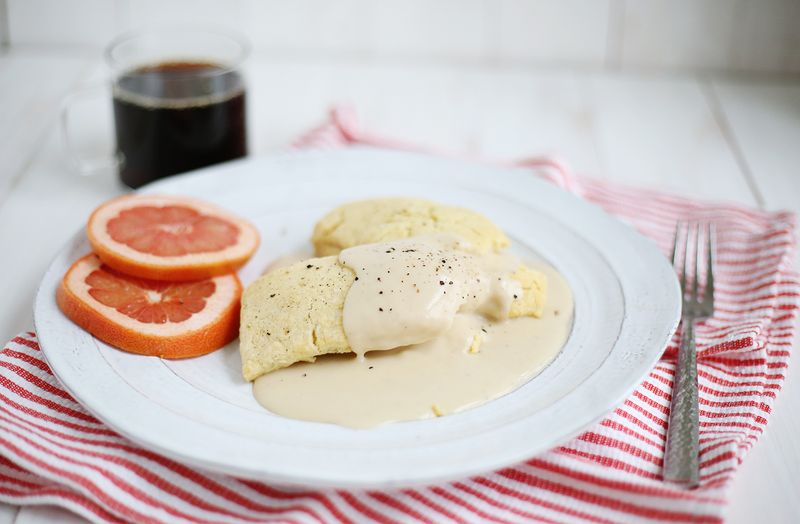 So these are vegan biscuits and gravy, very much inspired by Cafe Flora in Seattle (although I have NO idea if my gravy recipe compares much to theirs, as I don’t know their recipe). Trey and I both love biscuits and gravy, but we don’t find very many vegetarian or vegan-friendly options here in our southern Missouri hometown. We love getting them when they’re available, and I am always in the mood to try and make them at home when I get a chance.

For the gravy I did some research (a.k.a. clicking around the Internet and consulting a few cookbooks) to see what flavors are often substituted to give things a “meaty” or “sausage” taste. You can simply use a vegan-friendly faux sausage or bacon if you like, but I wanted to keep these vegetable-based. I landed on playing around with shiitake mushrooms, onions, garlic, and little bit of soy sauce. If you aren’t vegan, you could also add a little Worcestershire sauce, as it has a great peppery taste too.

I am not a master vegan baker. Not at all. And I’ve been dying to try out a recipe from the Minimalist Baker, because I love their site even though I don’t often eat vegan myself. Perfect opportunity. So I tried out their biscuit recipe (adding a bit of rosemary for flavor), and I loved it. If you enjoy vegan or gluten-free (awesome) recipes, I highly recommend you check out their site if you haven’t already. 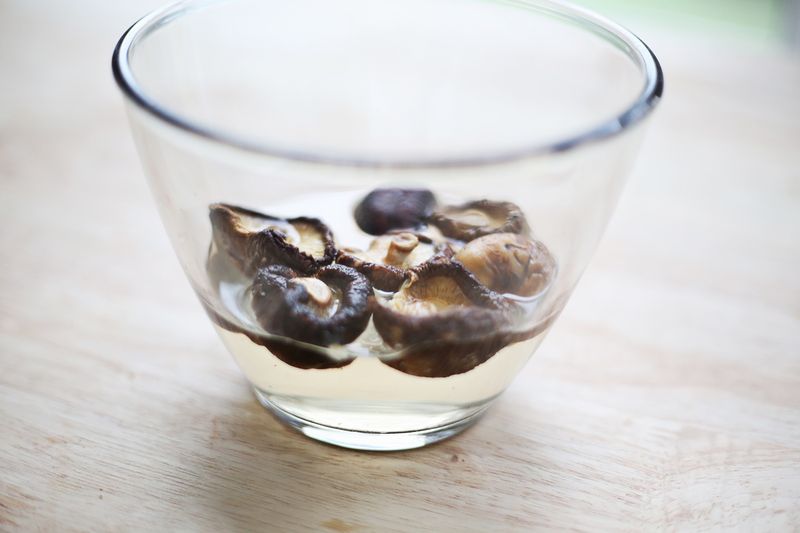 Since I used dried shiitake mushrooms, I had to first soak them in water for about 20 minutes. 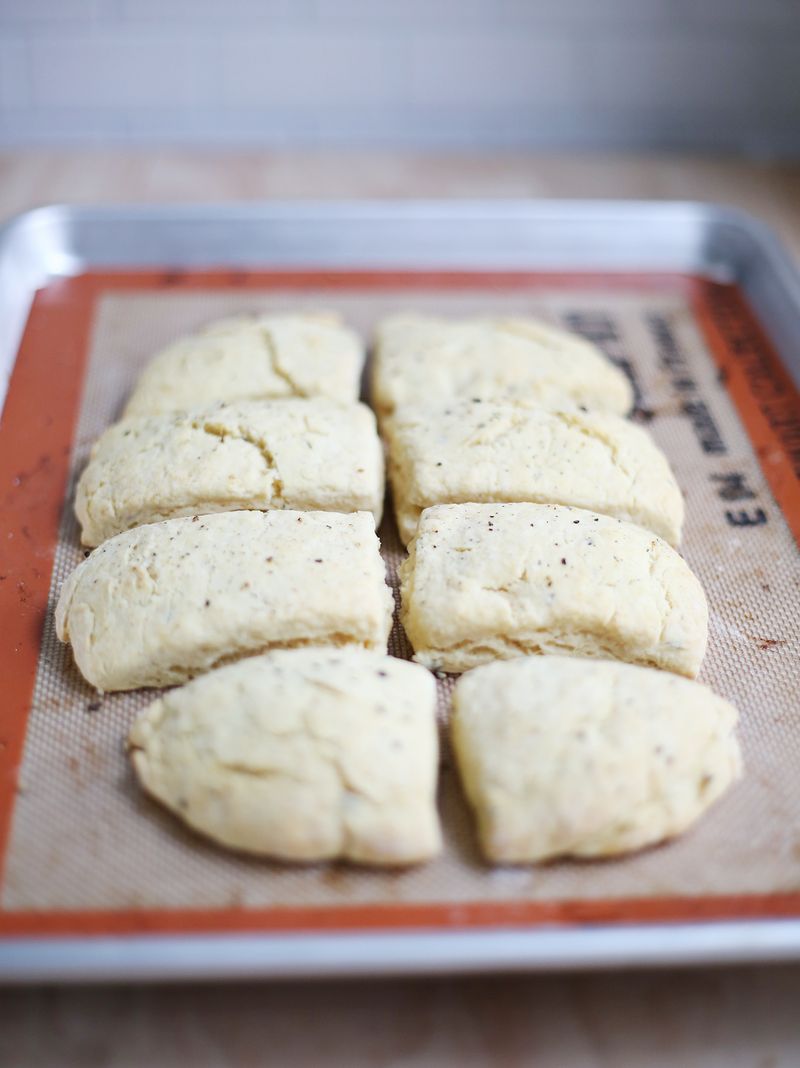 In a bowl, combine the first 5 ingredients and give it a good stir. Blend in the cold butter. I like to use my (clean) hands for this, but a pastry blender works well too. Then stir in the almond milk. A thick dough should form. If your dough feels a bit too dry, add a little more almond milk. I ended up needing less milk than the original recipe called for, so I’ve included that in the recipe above. But currently it’s quite humid where I live, so if you live in different conditions, this could slightly alter your results. Baking can be tricky like that.

Press the dough together, but you don’t need to knead or overmix the dough. Cut into 8 biscuits (I left mine squares, but you could easily do traditional circles instead). Place on a prepared baking sheet. If you like, brush with a little melted (vegan) butter. 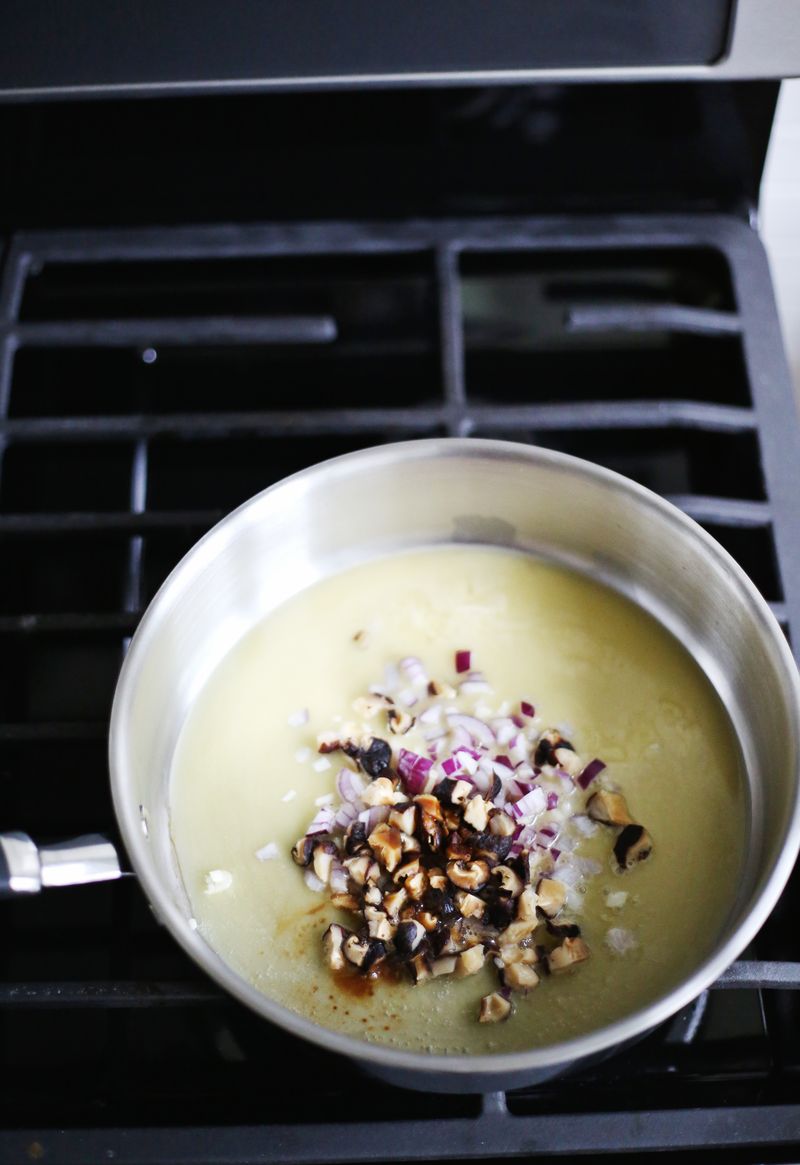 Let’s get back to the gravy. Chop up the onions and mushrooms (squeeze any remaining moisture from them as well), and mince the garlic. In a large saucepan, add the butter and oil, and melt over medium heat. Toss in the onions, mushrooms, and garlic. Pour in the soy sauce. Cook for about 2 minutes until the onion has softened. 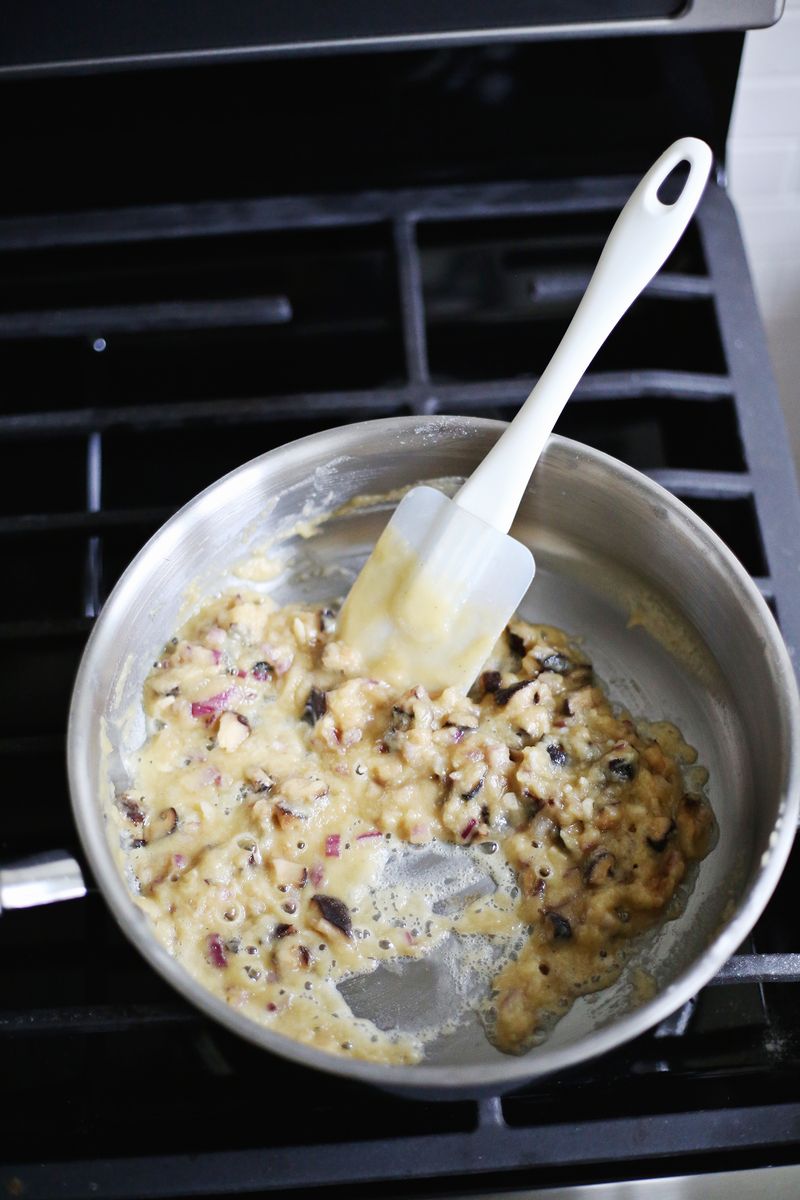 Add in the flour and stir to combine. This will create a thick paste, often called a roux. It will bubble as it cooks, and it can stick to the pan easily if you don’t keep and eye on it and continue to stir. I like to use a heatproof spatula at this point as it makes it easy for me to move the roux around the pan without bits of it getting stuck to the sides or in the corners and overcooking. Cook for 2 minutes.

Reduce the heat to low and whisk in the vegetable stock and milk until a smooth (with chunks of onion and mushrooms) gravy forms. Taste and add salt, pepper, and cayenne to your liking. If you want your gravy to be smooth (as pictured in my photo below), strain through a fine mesh strainer. Or you can leave the remaining mushrooms and onions, either way. 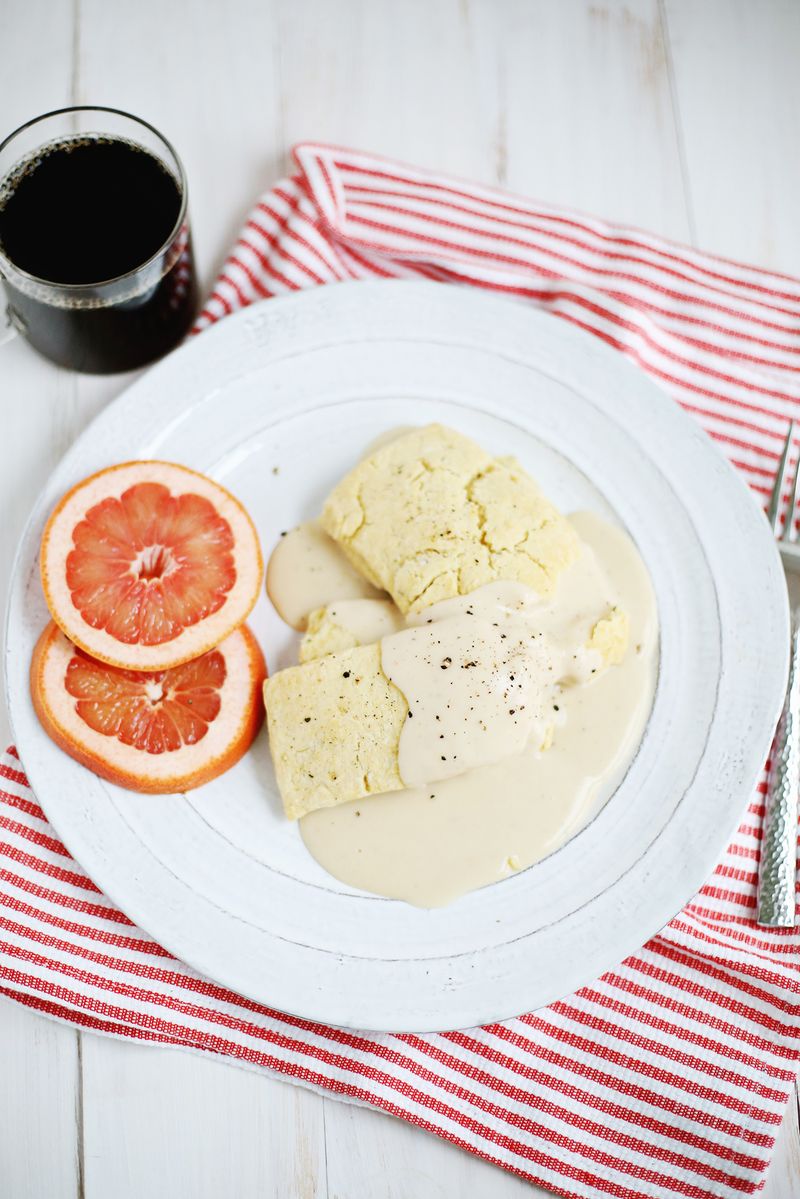 Serve alongside fruit so you don’t feel totally guilty about this delicious breakfast of carbs. 🙂 Even if you aren’t vegan at all, you should totally try this; it’s just that good. Enjoy! xo. Emma