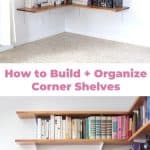 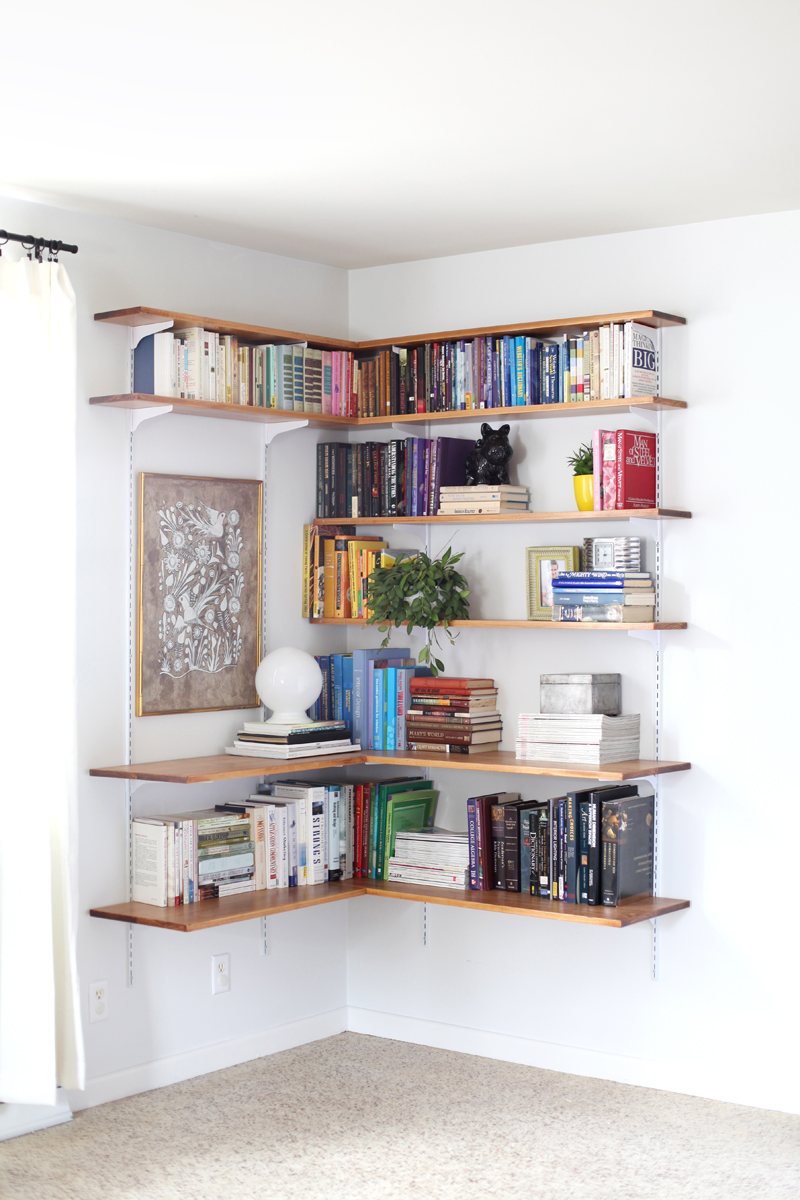 Hi, it’s Mandi from Making Nice in the Midwest. When my husband and I first moved into our ranch home two years ago, we weren’t quite sure how to fill out the long living room space, but we were sure we wanted some extra storage for our modest collection of books. After quite some time of living with this empty corner of the living room, I decided the perfect solution for the space was to build an adjustable shelving system that could eventually be lengthened into a workspace. We needed it to be adjustable, nice looking, and not too expensive. So instead of buying a pricy shelving system from a home store, we bought shelving standards and poplar wood to make our own! The corner is filled out nicely now, our stuff is organized, and I love knowing I can reorganize the shelves as time goes on. Check out the instructions below to learn how to make your own and make it look nice too! 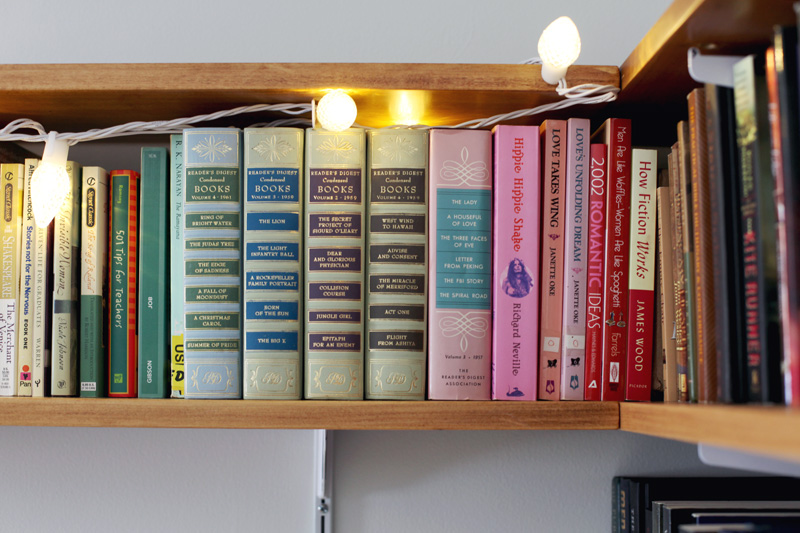 About shelving standards and how to hang them:
To get started, let’s talk about some helpful vocabulary. The long white vertical strips on the wall are called standards, and they have notches in them that are for hooking in shelf supports, also called shelf brackets. The beauty of standards is that they allow you to move shelves up or down without redrilling holes into the wall. Some people also find their vertical design to be visually appealing.

Standards must be attached to the wall by drilling screws through their occasionally placed screw holes and into wall studs. Because the standards will hold heavy shelves, they will eventually start pulling away from the wall if the screws holding up the standards aren’t anchored into studs. You may be able to use molly bolts or drywall anchors to attach shelving standards to an area of a wall that does not have a stud, but I recommend drilling the shelving standards directly into a stud if possible.

Planning how much lumber to purchase:
I wanted to save some money by purchasing narrower shelves for smaller books on the upper shelves, but I knew I wanted wider shelves on the bottom in case I wanted to use them for bigger items. Then I needed to decide how long I wanted the shelves to be. The shorter shelves needed to be at least long enough to reach two studs on the wall, so if you’re not sure about stud placement, you should use a stud finder to mark out where the studs are in your wall and determine which two studs will hold the standards and supports for your shelves. Make sure you plan for your shelves to be at least two inches past where the outside shelf standards will be, or three inches past that outside stud. 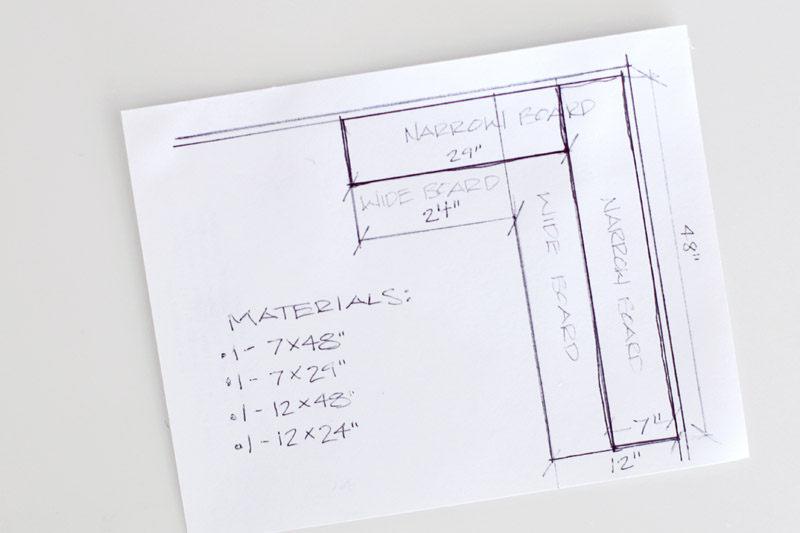 Bring a piece of paper to the lumber yard that lists the individual lengths and widths of wood you need for each shelf. They should be able to cut down the planks for you and help you decide what lengths of wood you need. For instance, if you need five 4′ pieces of wood totaling 20′, don’t buy two 10′ planks, because that will only give you four 4′ pieces and then scrap wood that is useless for this project. Instead, buy three 8′ pieces of wood, which will give you 4′ more than you need, but that’s just how it goes! They should help you with that at the lumber yard, and they should even be able to cut down the planks to size so you don’t have to do that yourself. 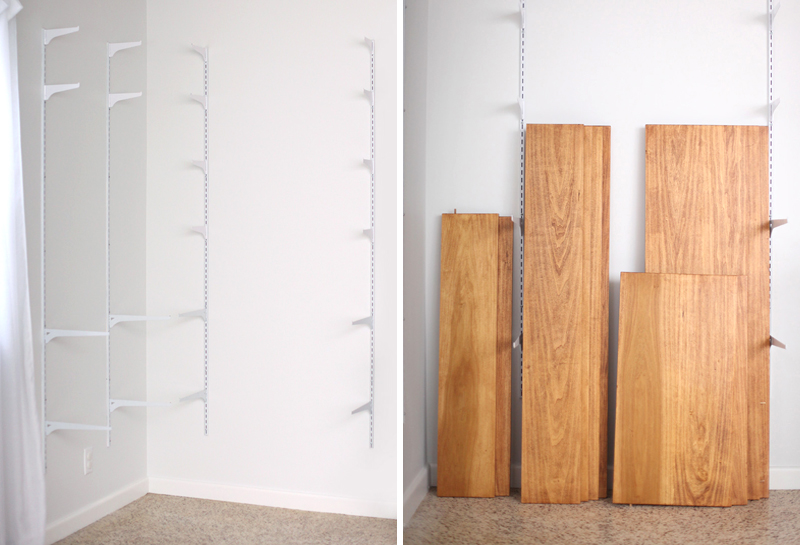 Planning the standards and brackets to buy:

You should only need two standards for each side of your corner wall system, unless you have a shelf longer than 64″, in which case I recommend using three sets of standards and brackets. On a short wall like I had (32″ long shelf), I hung the shelving standards on adjacent studs without skipping a stud, because there just wasn’t enough length to skip a stud and still have two shelf supports. On the longer wall, I did skip a stud in between sets of standards and brackets, because I wasn’t hanging anything extraordinarily heavy, and I had enough length to still hang two sets. If I was placing my Encyclopedia Brittanica collection here (I don’t actually own one, but ya never know!), I would proably have used three sets of standards and brackets on this longer shelf section for more support.

When I originally planned out this corner wall system last year, I had more shelves in the mix, but now they are sitting in storage, potentially to be used again in the future. At the time, I had five 7″ wide shelves on each wall, and two 12″ wide shelves on each wall. I purchased two brackets for each shelf, but the brackets I purchased are actually shorter than the width of the shelves in order to save money, but also to achieve a nice profile. More on that next! I bought my standards at Home Depot, but I had trouble finding shorter shelf brackets at local hardware stores, so I looked online and found them at Cabinet Parts right here.

Because I purchased shorter brackets than the width of my shelves, and the brackets have raised notches on the ends that stick up to keep the shelves in place, I had to drill into the underside of the shelves so the notches could slip into the shelves, keep them in place, and look nice from all angles. I did this by placing the shelf onto the brackets and marking where the notches hit with a pen, then drilling out a very shallow hole where I marked with a power drill.

I also wanted to connect the where the corners of the shelves met by using little dowels. This kept the shelves from shifting or coming apart. To do this, I measured in from the edge of the wood (the same distance for each shelf) and drilled a 1/8″ hole there that was vertically centered. I drilled two sets of matching holes for each pair of shelves, then inserted short 1/8″ dowels into the holes to connect them. 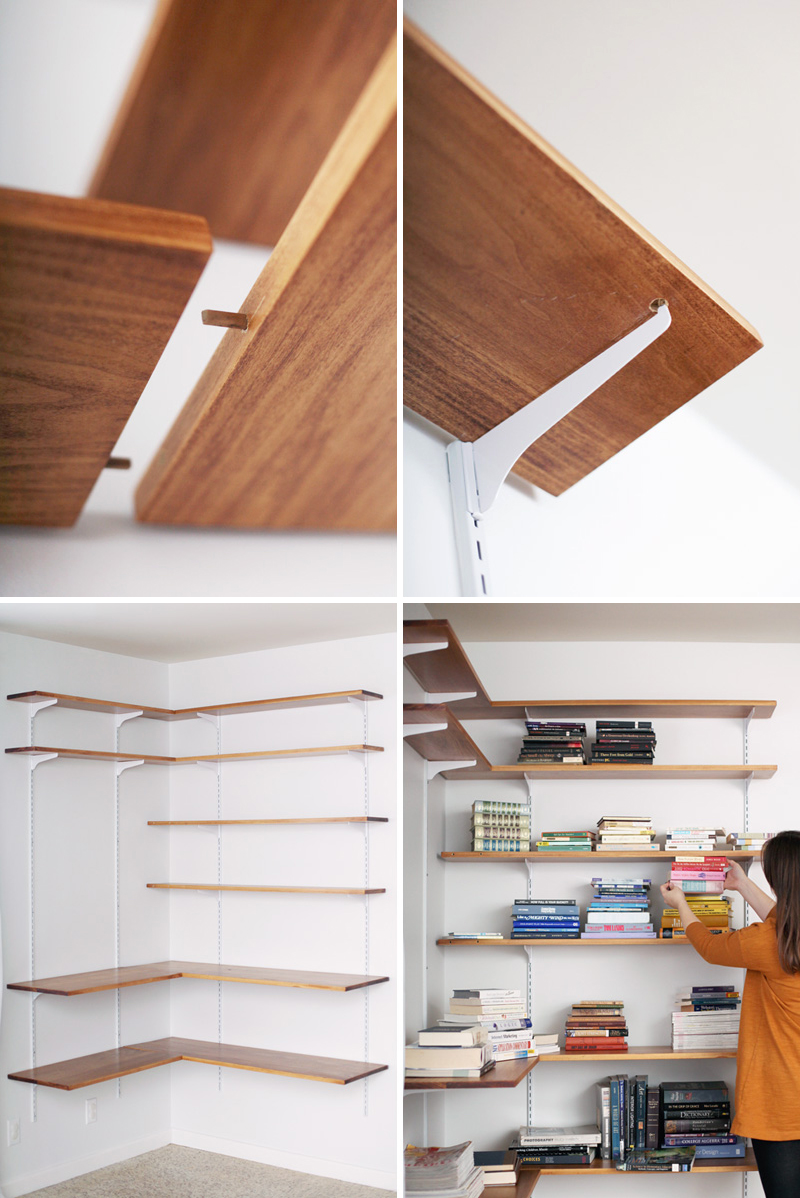 After the shelves were assembled, I brought out all of the books I wanted to display, and arranged them according to color and size. I did this to make the corner look less cluttered, and I don’t have a large enough collection that organizing by color would make a particular book difficult to find. After they were placed in organized piles, I began setting them up on the shelves, keeping no space between the books on the higher shelves, and some spaces in the lower shelves. If you have enough books to fill out each shelf, then by all means- do it! I simply don’t have that many books, so I used decorative accessories to fill out the spaces in between. 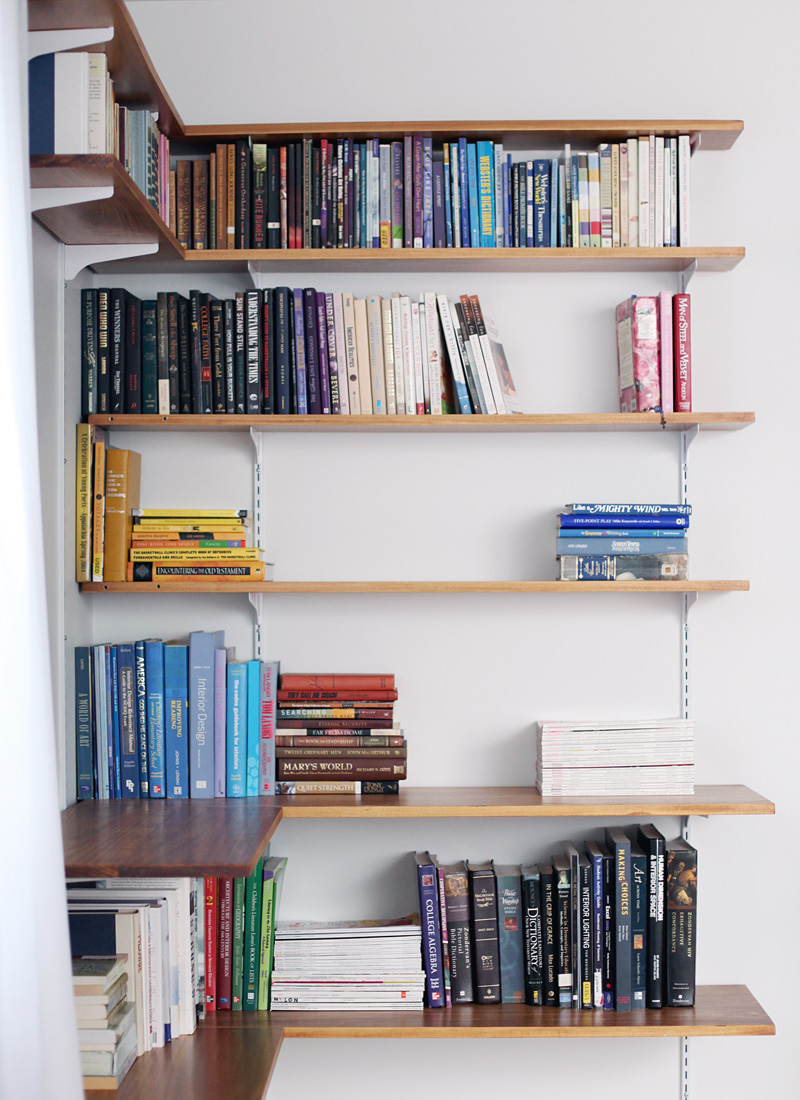 The photo above is what the shelves looked like after I nicely arranged the books. You can see the various gaps I left, in particular the large space on the left side where I hung larger artwork. I filled out the other spaces with a framed photo, a clock, two plants, a storage box, and a little ceramic dog. I tried to balance out the colors in the shelves by having dark colored books caddy corner from other dark books, and the same for other colors, like reds, whites, blues, and even the greenery of the plants. The beauty of the shelf standards is that they can be rearranged whenever you want, and more shelves can always be added or removed from the setup. 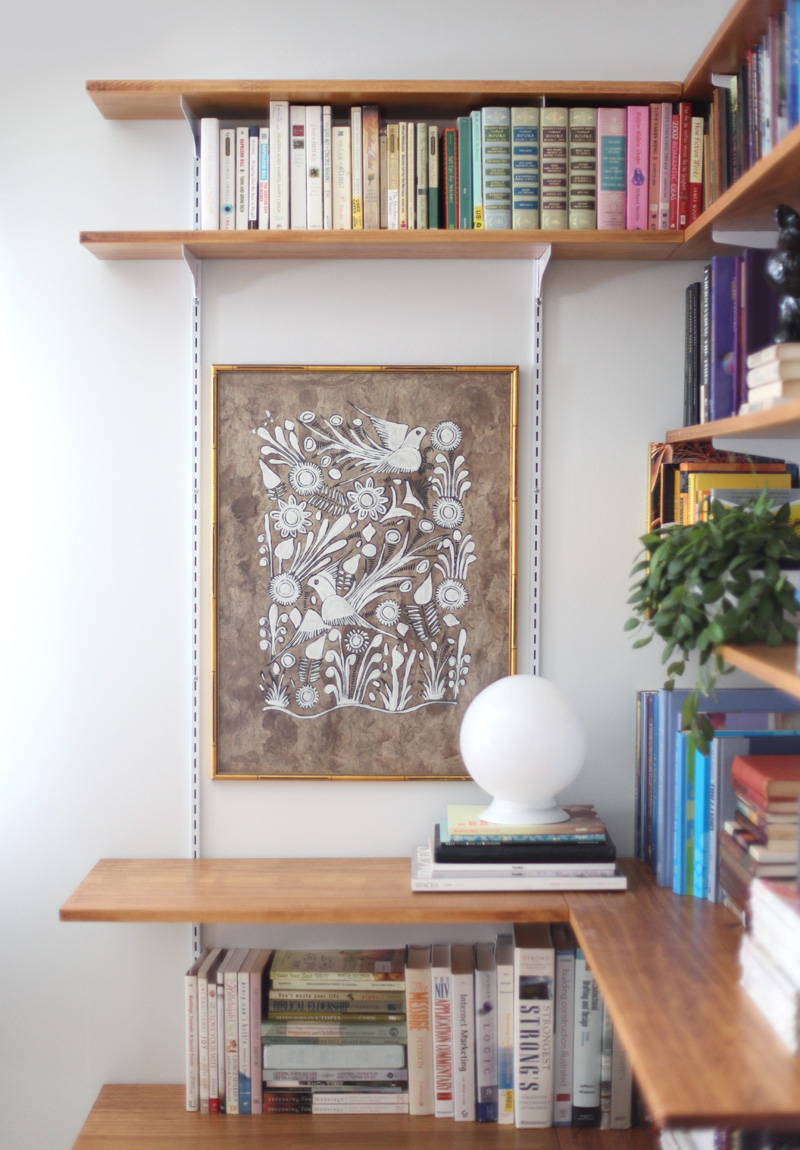 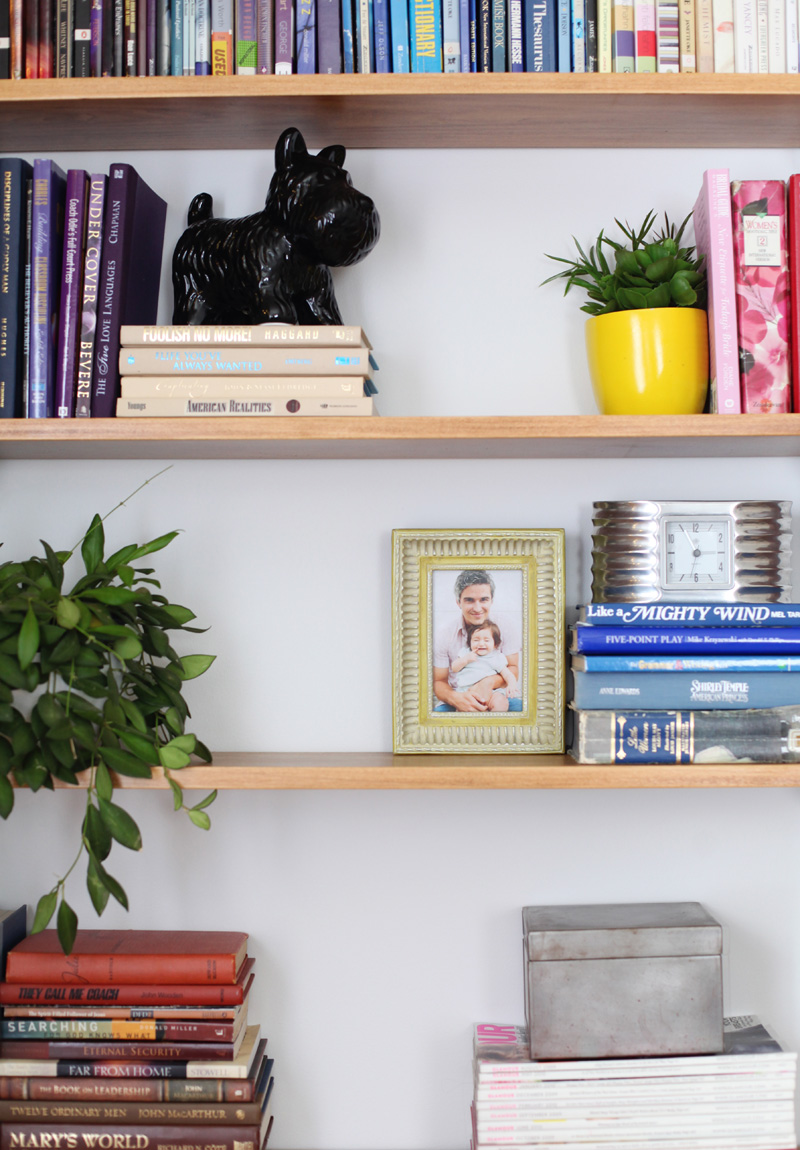 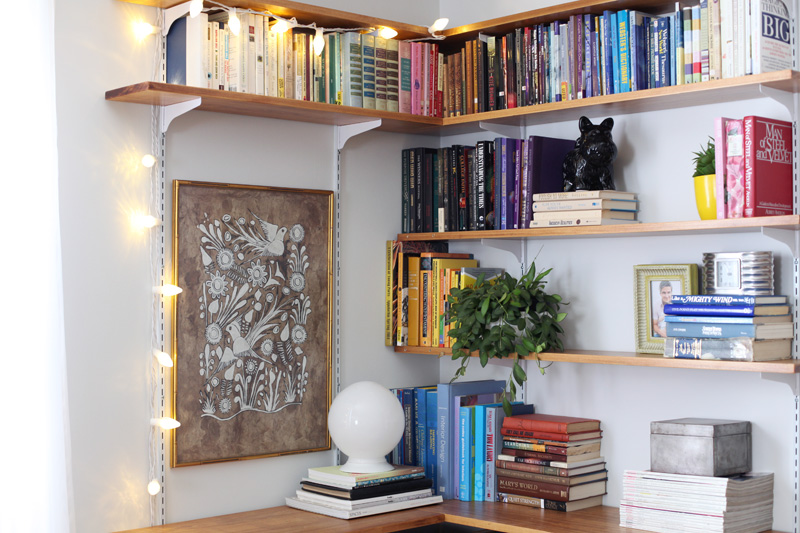 For the holidays, I added string lights for a festive, cozy feel, and during the rest of the year, a lamp lends light to this little corner of our living room. These shelves are a fun, personality-filled part of our house that makes it feel more like a home. –Mandi