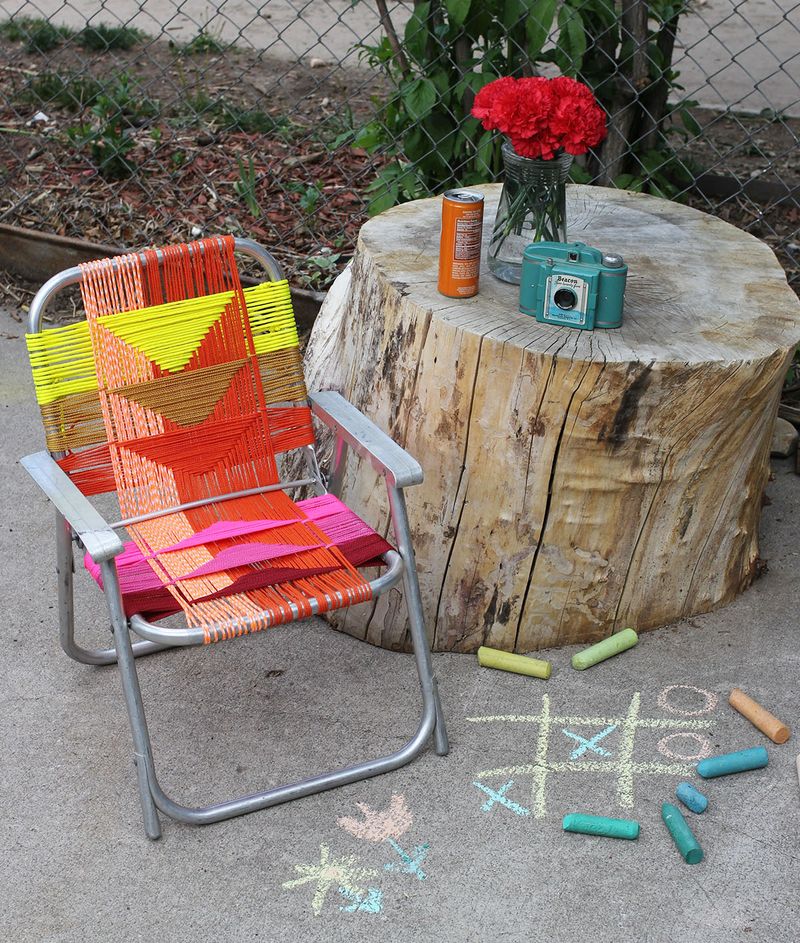 I have a hard time saying no to vintage aluminum chairs. They are such a summer icon and can come in some great colors. Sadly, some of ours have had so much use, the webbing had become threadbare and brittle. I wasn’t sure one of them would last another summer, so I decided to see how I might give it new life.

Macrame seemed one of the few options, but I didn’t know if I wanted to mess with all the knot tying, and I’ve been on a weaving kick as of late, so I ditched the knots and settled on a fun geometric pattern in vintage-inspired colors. 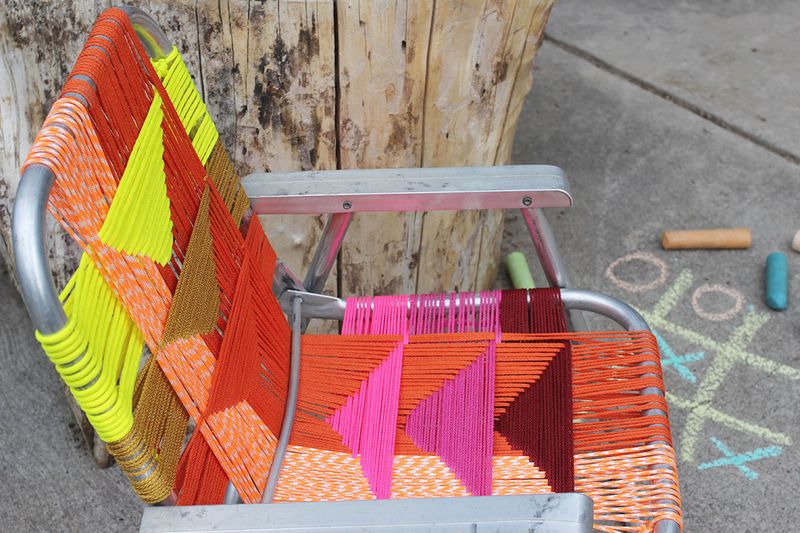 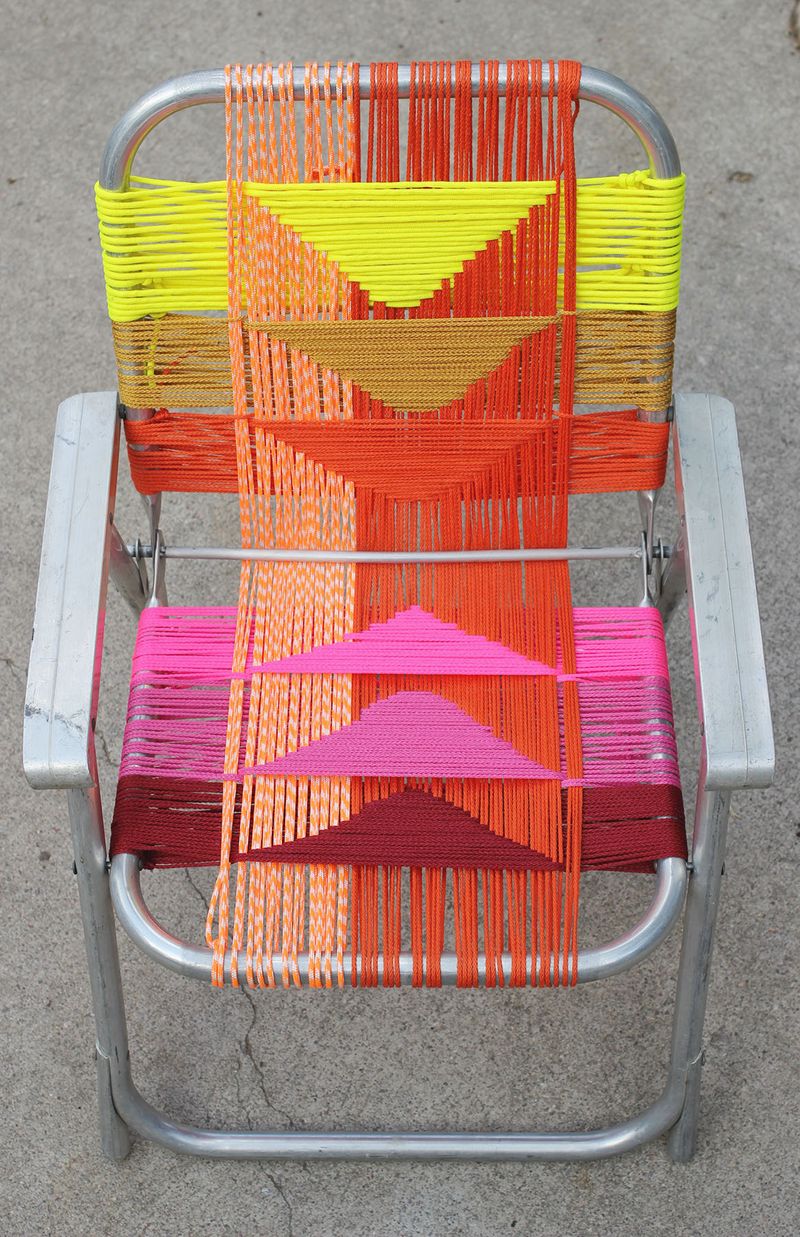 Step One: Remove webbing from your chair by cutting the straps and then unscrewing the posts on the back of your frame.

Step Two: Decide which color you want to start with, and tie a double knot around the seat of your frame at the edge of the flat front. Leave a tail of about 5″.

I used a rubber band to loosely hold my paracord and macrame cord together as I wrapped it to keep things from getting too tangled.

Step Four: All of your rows should wrap from the front and over the back of the frame edges. Continue until you wish to switch colors or run out of cord.

Tie a double knot around either the top or bottom frame edge, depending on where you end up, and make sure you have enough cord left to tuck in when you’re done. You can also tie onto the next color or strand of cord as shown below. 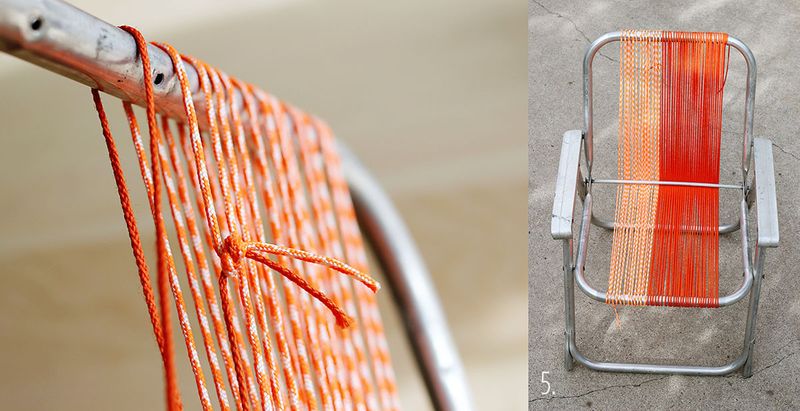 Step Five: Weave until you are near the other end of the flat part of the frame. There will be a slight negative space in the rounded corner, but don’t fret. It’s supposed to be that way. 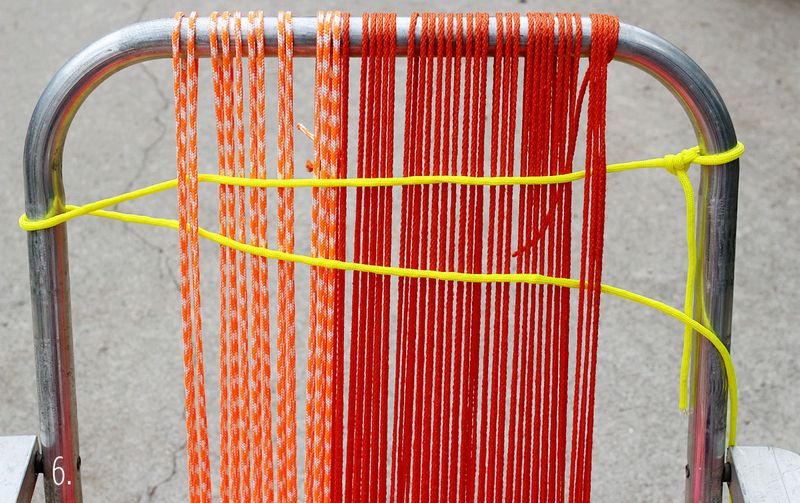 Step Six: To start weaving in the other direction, just tie on the side of the frame with a double knot and leave about 5″ of tail. To make the triangle pattern, take your cord under the first four rows (two top and two bottom to get four total), and then come up and over with your cord.

Tuck it back under so that you have four left on the other end. Wrap your cord over the top of the frame on the other side, and go back the same way you came as shown above. 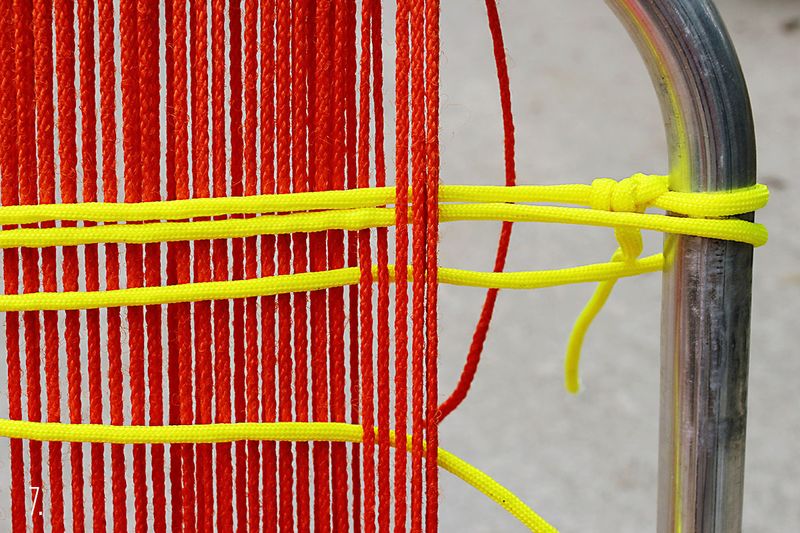 Step Seven: Wrap over that starting side of your frame, and come up under those first four plus the next two so that you’re skipping a total of six. Mimic that same amount on the opposite side, and then come back the way you came again. 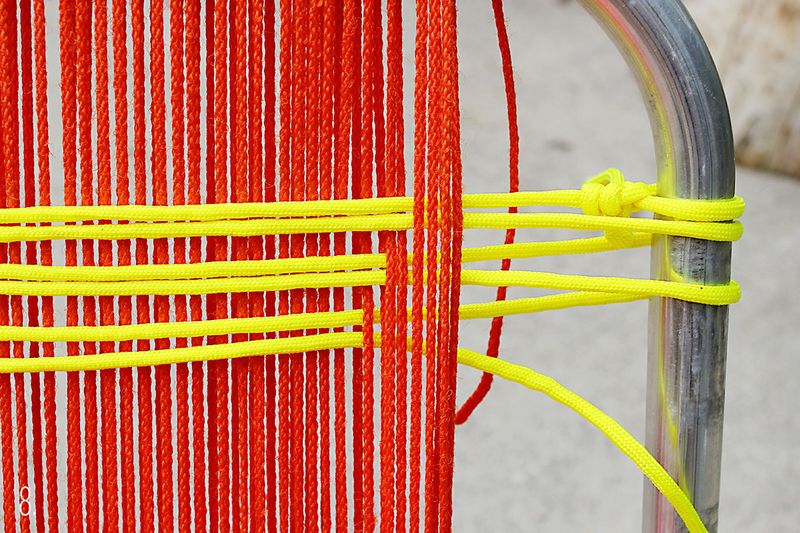 Step Eight: Keep repeating this pattern of reducing two rows every time you go across, and then follow back the same way you came. This will create a triangular pattern.

Keep going with that cord until you finish or need to tie on another end of the same color. 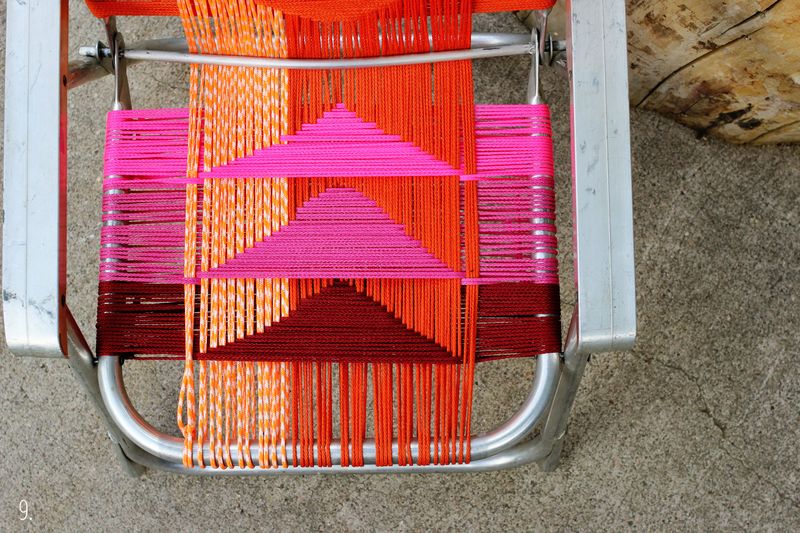 Step Nine: This is what it looks like to switch colors with each new triangle. I ended up with three on the bottom and three on the top for this size of frame. If you use an adult-sized chair I would suggest using a thicker macrame cord to make quicker work. 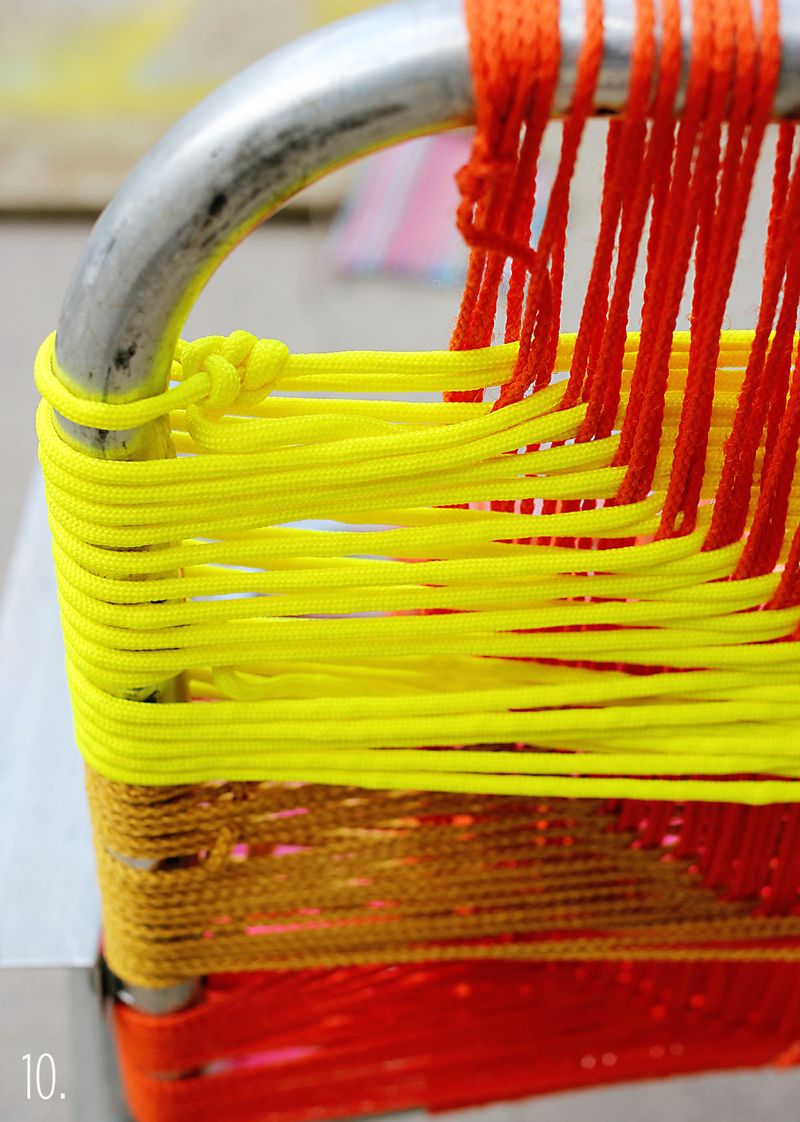 Step Ten: Trim your loose tails so that they are just long enough to tuck in and rest inside. If this were a macrame project, your loose ends would be better hidden, but we’re just weaving and leaving the fancy knot-tying to another project. 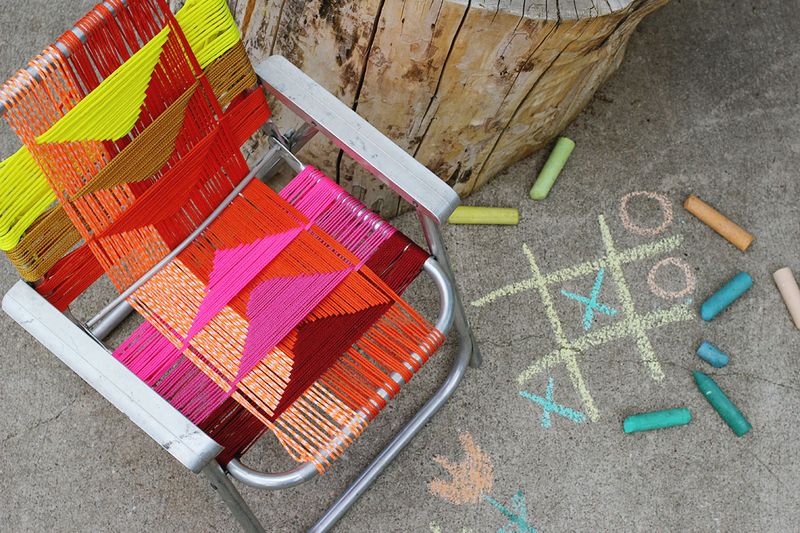 This was one of the more time-intensive projects I’ve done lately, and it may be a while before I can finish another one, but after Sebastian saw this one he put an order in for a red, white, and blue chair with a large ‘X’ on the top and bottom. We’ll see.

I learned a lot through trial and error on this project. If you pull too tightly on the first round of woven rows, you’ll end up with a chair that won’t stay open after it’s been woven even tighter with a second layer.

Also, if you get your rows too close to the rounded edges, they’ll slide over and mess up your neatly-spaced pattern. Finally, thin cord comes in prettier colors, but it also means a lot more rows to weave. Worth it? I think so. 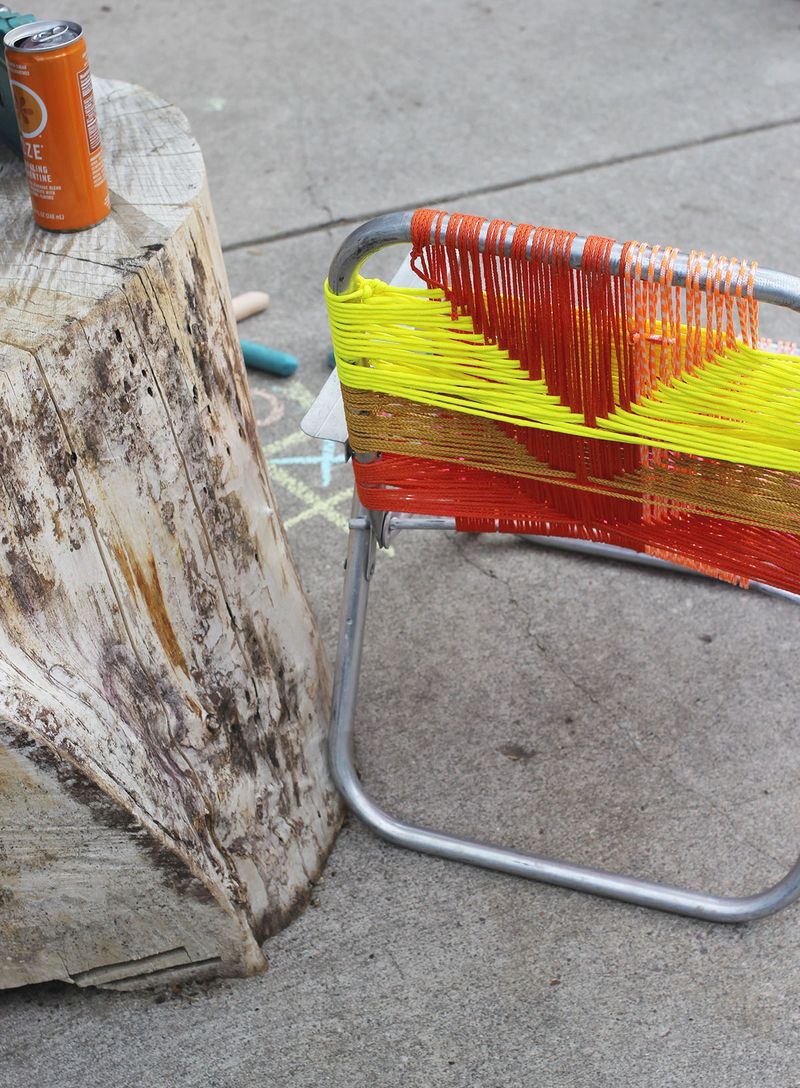 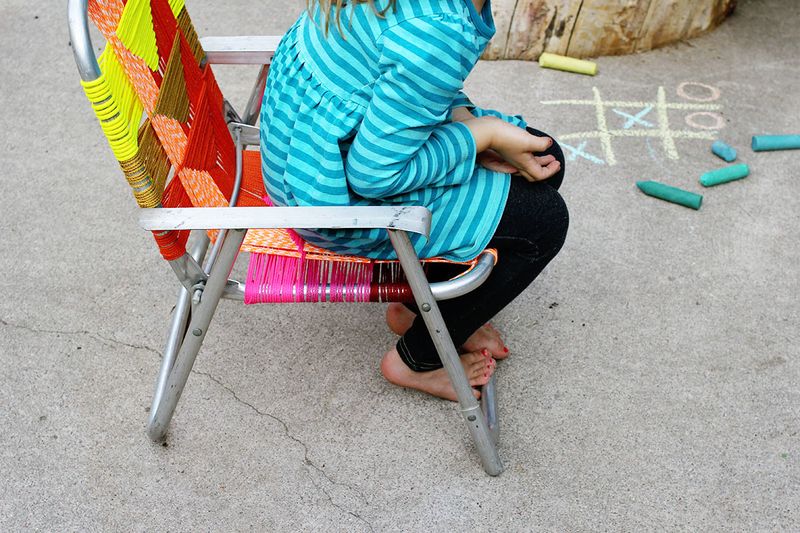 I’ve never been so enamored with a chair before. Time will tell about how well it holds up to the energy of a four-year-old. I may just hide this one away so it doesn’t get dirty! –Racel