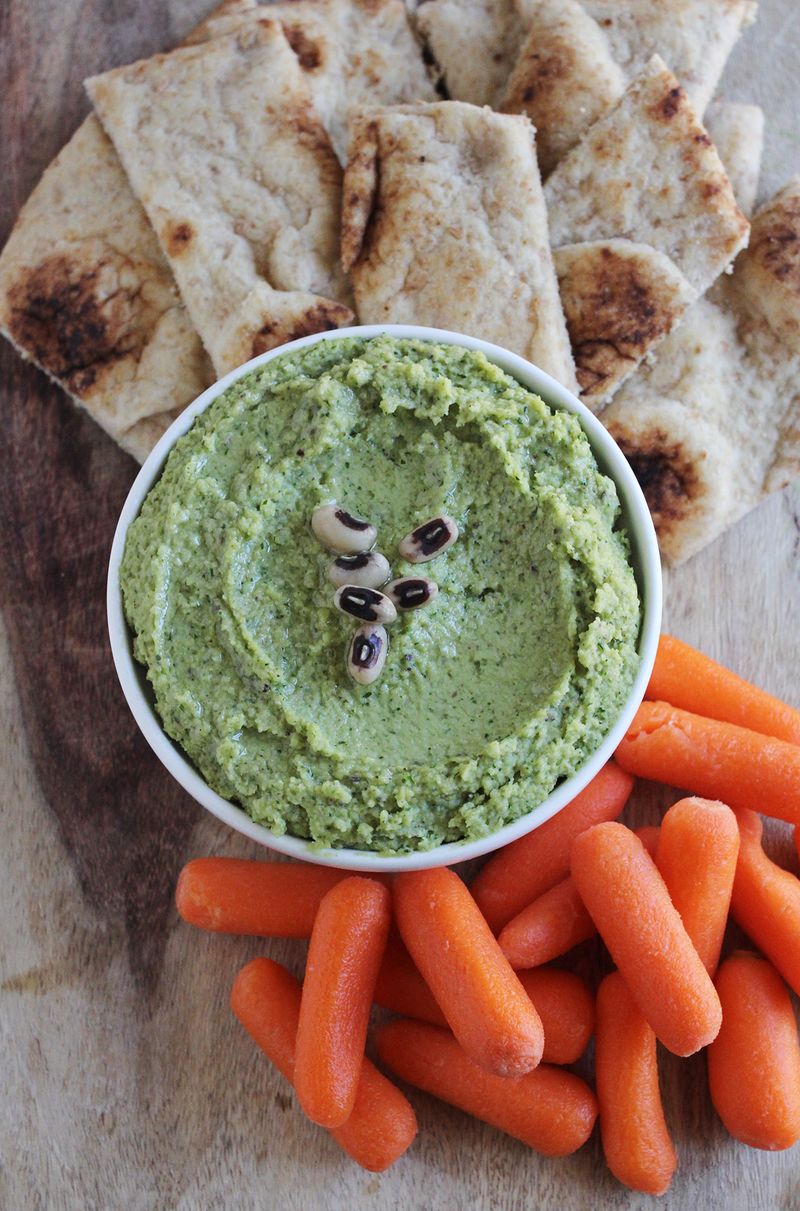 Have you ever heard of eating black eyed peas for the New Year? It’s a big tradition in Trey’s family. He still goes over to his parents’ house on New Year’s Day to eat a little bowl, leaving behind just one pea/bean for luck. Eating black eyed peas on New Year’s day is supposed to bring prosperity in the new year (the beans are a symbol of prosperity, because they swell when they cook). Many people also choose to eat their black eyed peas along with collard greens, or some kind of greens, as a symbol of… well, paper money. It’s kind of funny a thing when you think about it. I know Trey’s family does it more for getting together and sharing a meal than for wishing for prosperity, but both would be nice, no? 🙂 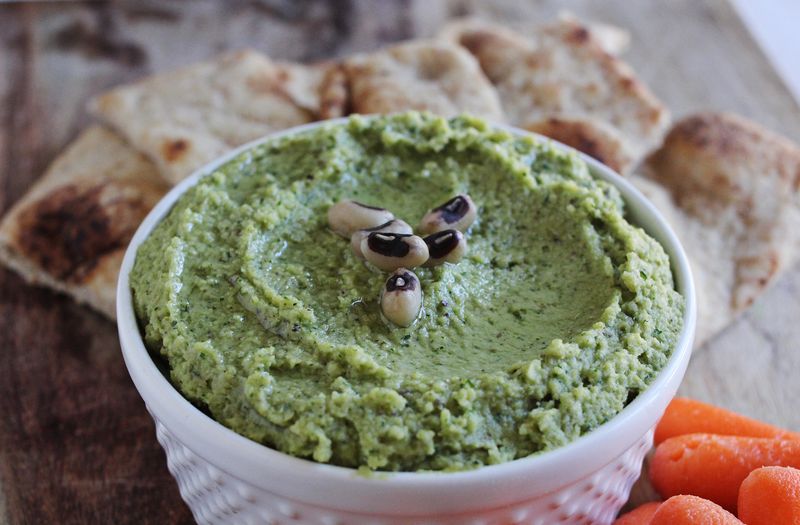 In my family we were exposed to the tradition of eating black eyed peas on New Year’s Day, but it wasn’t something we did every year. My mom really doesn’t like the taste of black eyed peas. If you’ve never tried them I would just describe them as, earthy. Most people cook them with pork to add flavor, but I wanted to find a way to avoid the pork, but add some flavor and maybe something green to the equation. I decided to make black eyed pea hummus. If you’re thinking about joining in the black eyed pea tradition this year but want to try something a little less than traditional, I’d highly recommend giving this a taste. 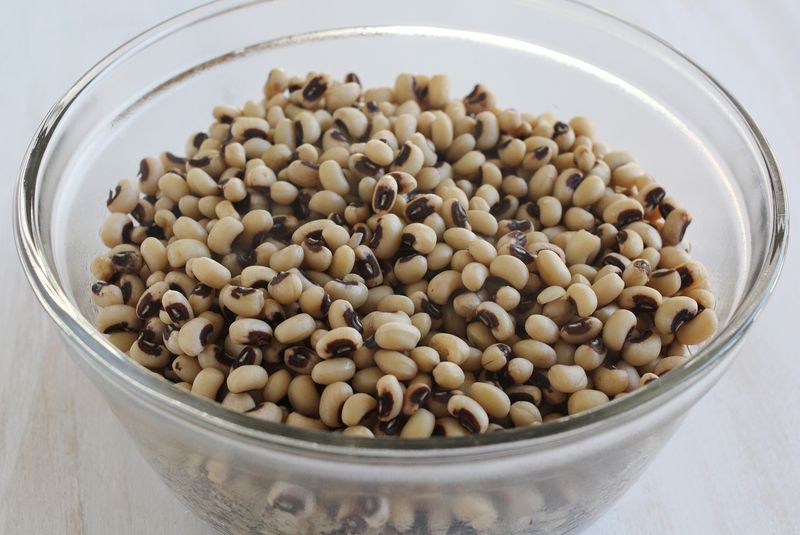 I couldn’t find any canned or pre-cooked black eyed peas so I cooked up a bunch of dry beans first (just follow the package directions). I love how they look! Black eyed peas have to be the prettiest bean around. 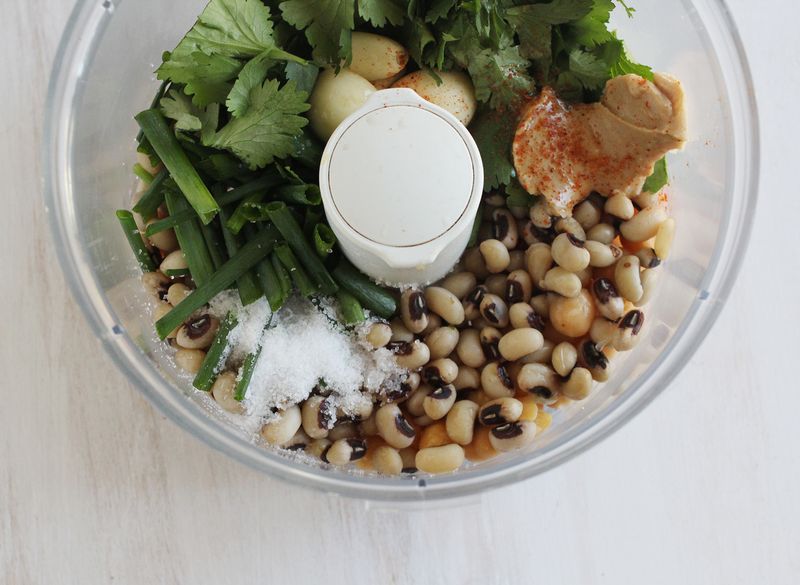 Once you have all your ingredients prepared place the first eight ingredients listed above in a food processor. Pulse until well combined. Then, while the processor is running, slowly pour the olive oil in through the top spout. Taste and if need add more salt or some pepper. 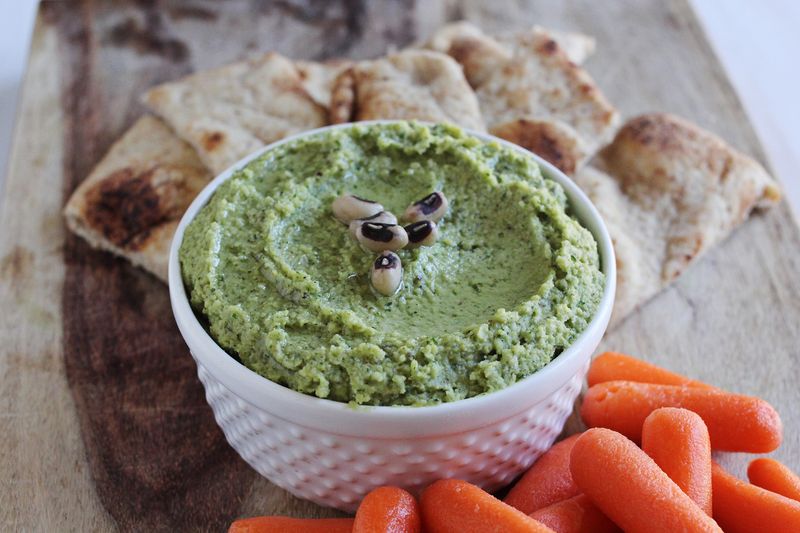 Wondering why I chose to garnish my green hummus with a few black eyed peas? This way you can eat all of your chosen black eyed pea dish but leave just one bean left in the bowl. It’s a New Year’s thing. Get into it! Happy New Year to you! xo. Emma

New to your site.. LOVE IT…
We in India use a lot of black eyed beans in our cooking , now I have a new way of cooking them.. THANKS..
Will keep coming back..

We have that tradition in my family, with collards, and hog jowl, too. It’s not something I cared for growing up but as I’ve gotten older, I crave these kinds of old southern traditions to carry on.

My boyfriend’s family strongly enforces the bean tradition. Any kind of beans will do! I had never heard of it before but love little things like that, and I plan on keeping it going strong (this year’s beans were chili!).

My boyfriend’s family is into the black eyed pea thing, but it was never a tradition in my family. Funny enough, he never liked the taste of the plain beans either so we searched for something new this year and made a black eyed pea version of falafel (adapted from a recipe in Bittman’s How to Cook Everything). They were amazing! We served them on a salad with an avocado/yogurt dressing. We already said we’re not waiting until New Year’s next year to make them again 🙂

Interesting! I’ve actually never heard of the black eyed pea things. Although, up until my late teens, I didn’t even realize that people went out for New Years. I just figured everyone stayed at home and opened a bottle of champagne and ate pizza since that’s what my family always did. haha. I love this idea though! I’m definitely gonna have to try it out.

this sounds so good!!

What are you serving it with in the background? Toasted Pita?

This sounds so simple to make and easy!

This looks so good! My fiancé family has the same tradition for New Years but they make a soup. They also have to have cabbage too.

This looks AMAZING! I almost want to lick the screen! haha 🙂 Thank you for sharing 🙂

My husband’s dad is from the South so he made fried chicken and black eyed peas on New Year’s day. My husband and I have continued the tradition. Happy 2014!

Oooh this looks good. I don’t like the taste of black eyed peas so this would be perfect! 🙂

Oh my goodness that look so delicious!

If it’s even got the WORD hummus in it, I’m there. Chickpeas forever, man. This looks like a delicious take on it. Thanks for sharing!

So creative! I love hummus so I’ll definitely try out this recipe.

“Black eyed peas have to be the prettiest bean around”- HAHAHA! Yes. Indeed! Happy New Year!

this is really unique! and looks great!
xx