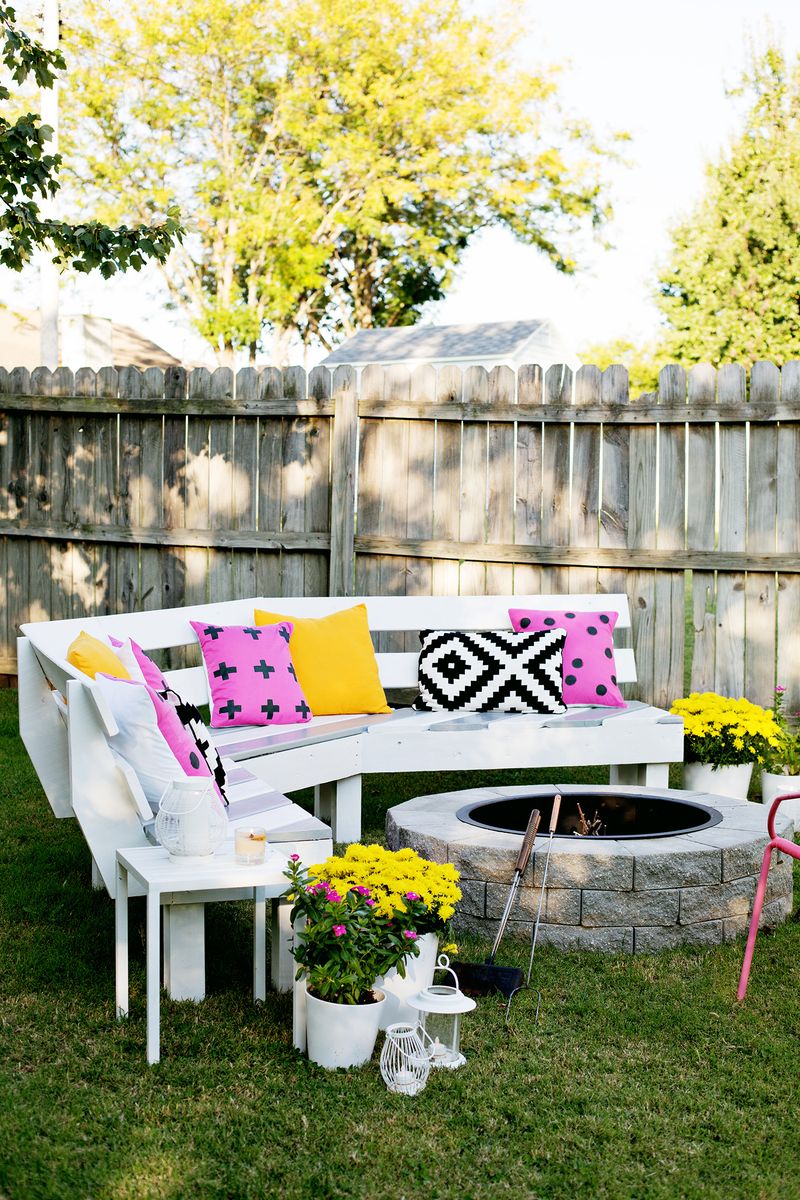 Oh yea, fall is here. Time for fire pit hangs. Nothing like sitting around with friends warming yourself with a fire and a stiff drink (like hot cocoa with extra chocolate…or a whiskey neat). Laura has a great backyard fire pit she put in a couple weeks ago. Last week we braved the elements (It was down in the 60s and drizzling. I almost had to put a hoodie on.) and built a bench. Initially, we planned on making it encircle the pit with a split hexagonal shape. As I was building the first half, we realized it was going to look a little too big for the space (Laura said it was looking like stadium seating compared to her yard). So we decided to scale back and just do one side, which worked out great, and there is still plenty of room for folks.

The build took about two days, which included the trip to Home Depot for supplies, which came to about $125. I’ve seen similar benches in the $2k range, so it was a pretty good deal. Alright, let’s get to the instructions so you can get to building. These plans can be scaled to fit your space and needs. I’m not going to get into specific measurements because you’ll probably want to build one that fits your space. This is more a guide to get you started and hopefully inspire you to build your own. 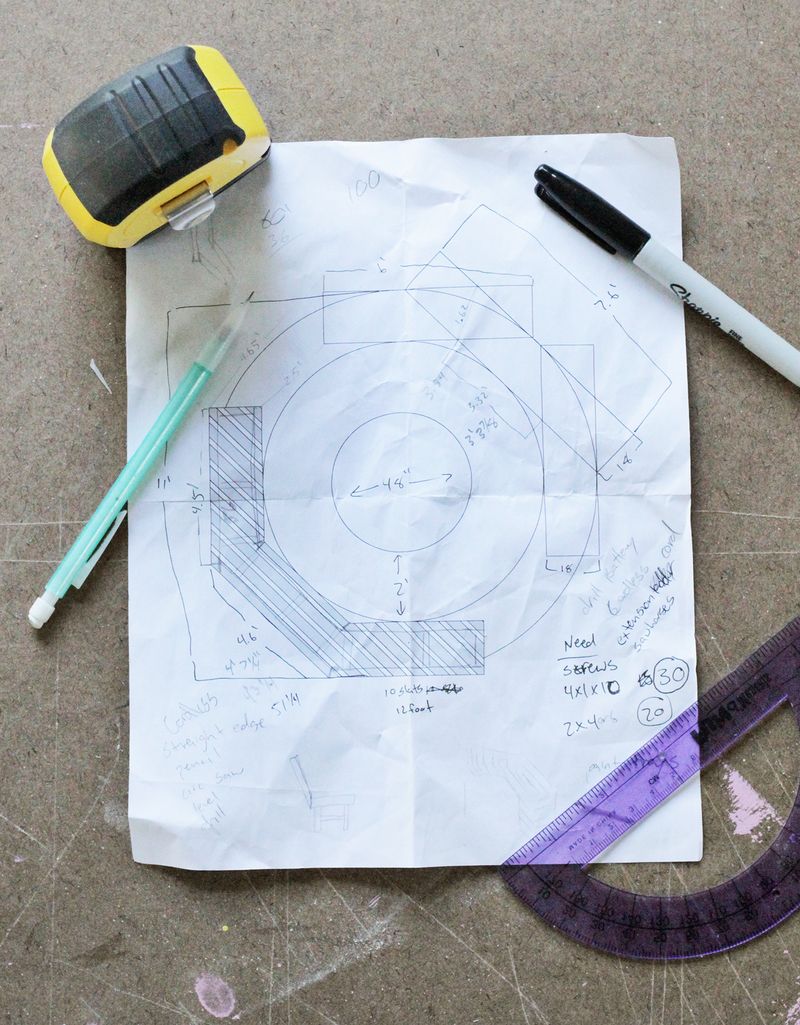 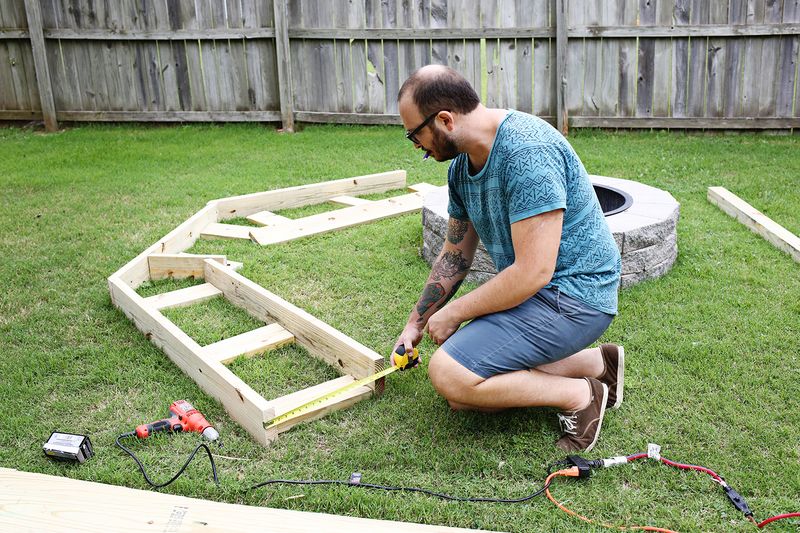 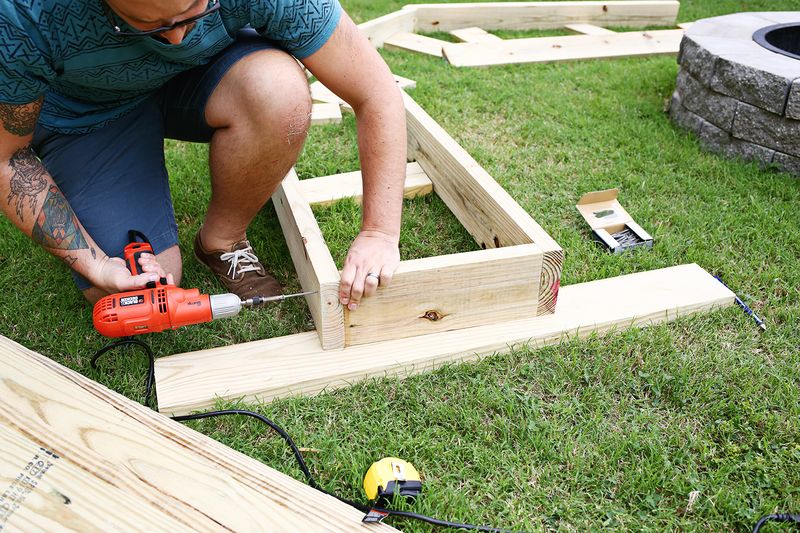 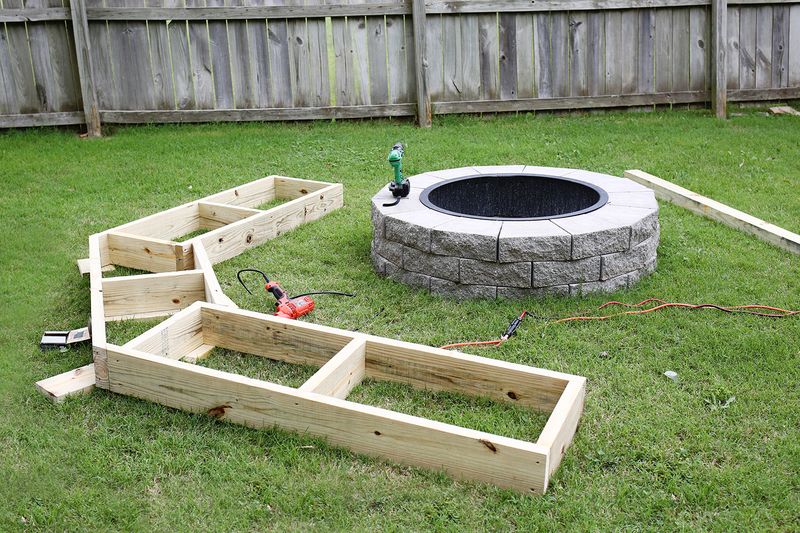 Step One: The first thing I did was figure out what the heck I was doing. Even though I do sketches and calculate the lengths and angles on screen, it takes a minute to translate that to actual material. I used standard seating measurements (18″ deep, 18″ high, 18″ back support). After staring at my sketches (which consisted of a lot of paper rotating and deciphering of my handwriting), I decided to cut all of the frame pieces first (starting with the back/longest piece and building off that.) 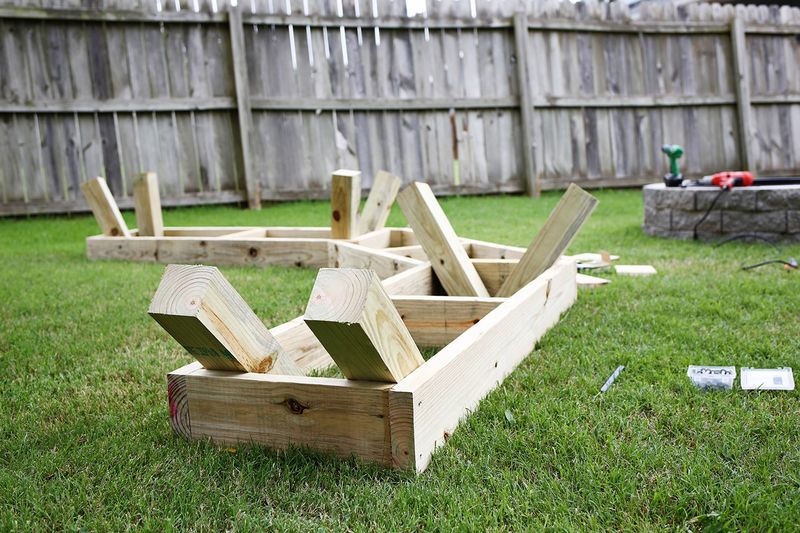 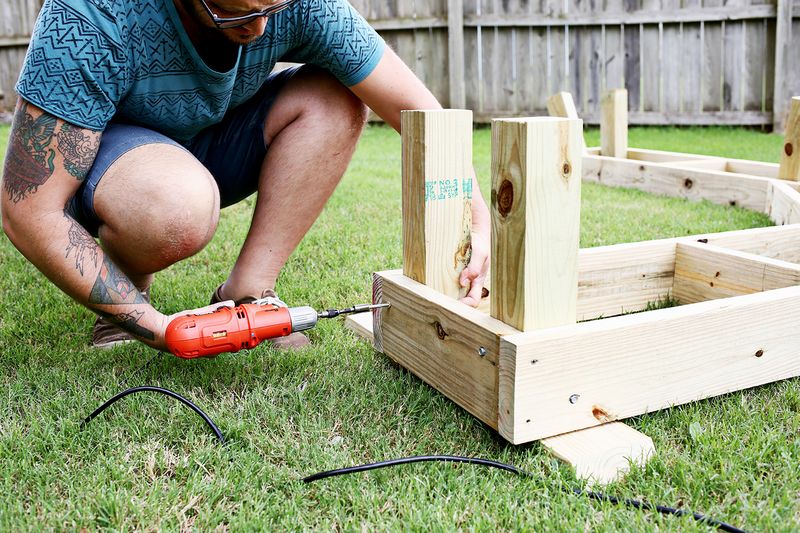 Step Two: After I got the seating frame all screwed together, we flipped it over. Then I cut all of the legs out, put them in place, then screwed them in. The screws I was using were extra beefy, so I just put two in each. Since we were building on grass, I had to put a piece of wood under each section I was working on to make it somewhat even. 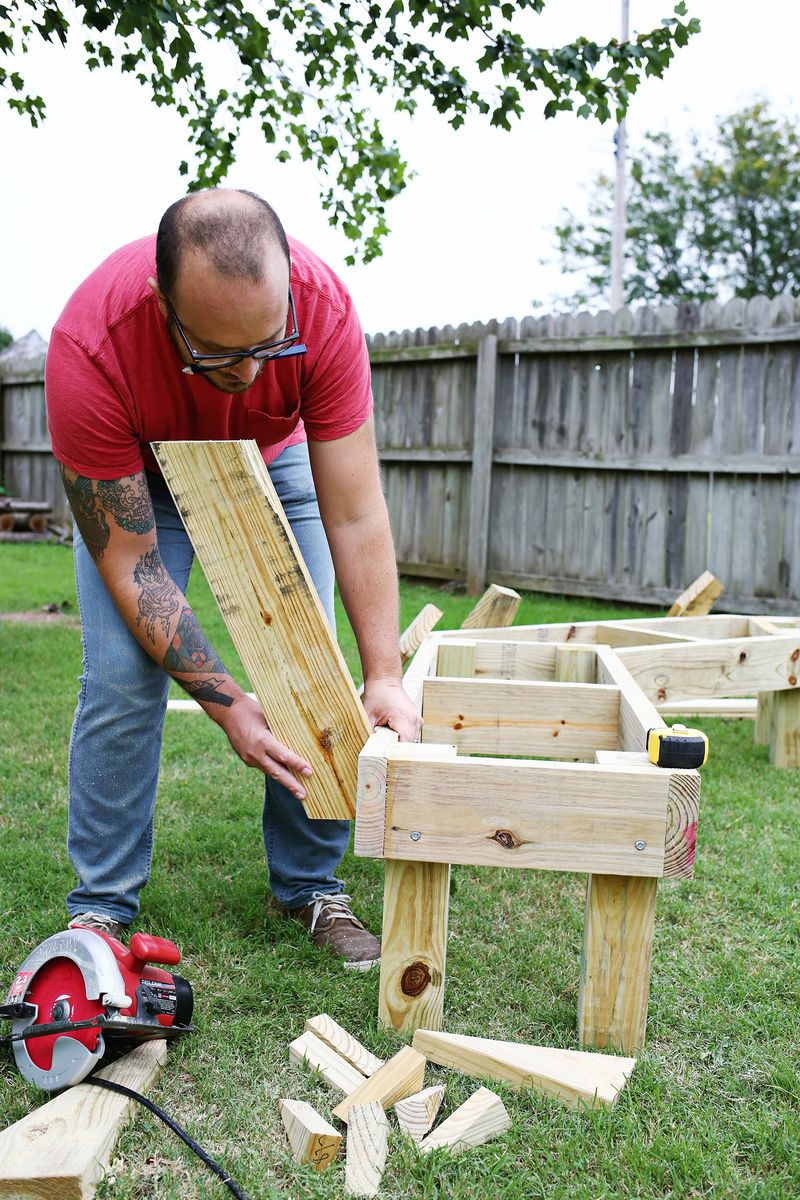 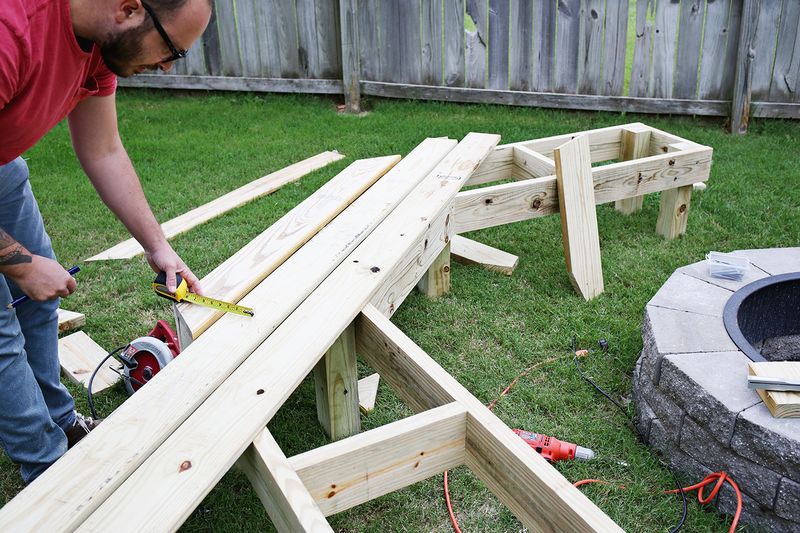 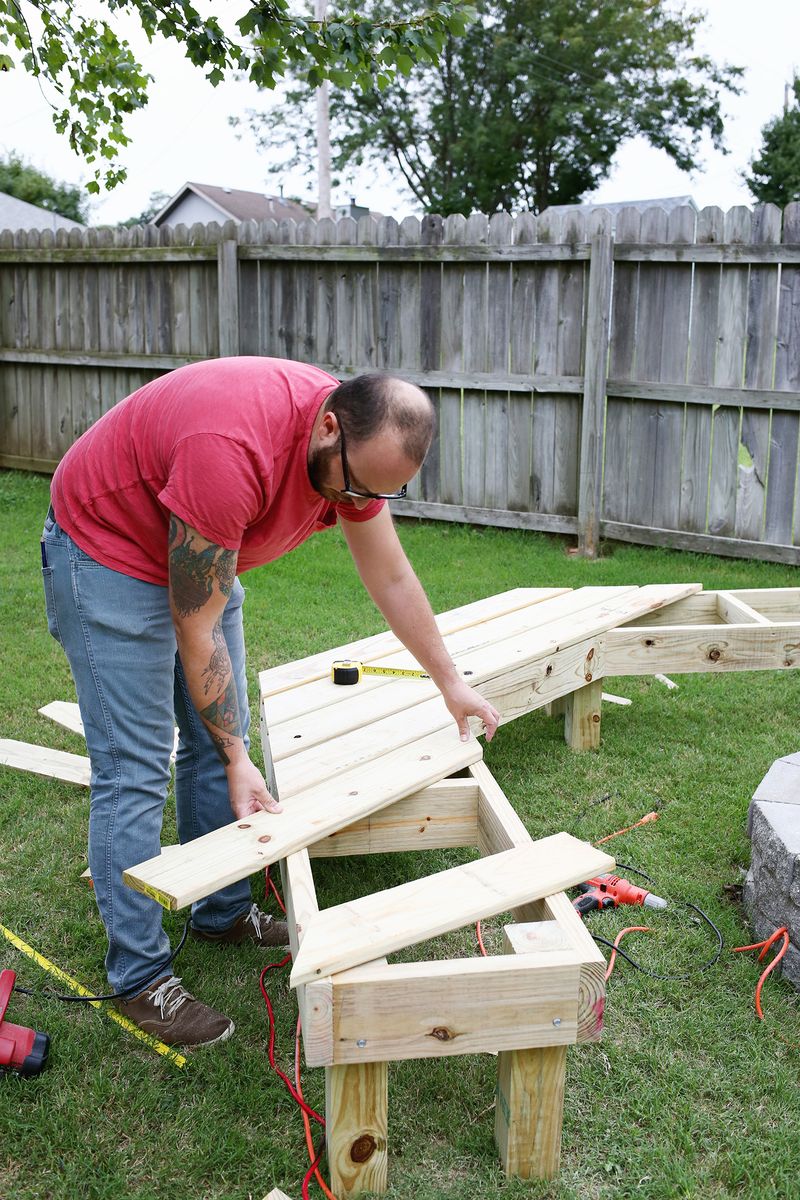 Step Three, and Four, maybe even Five: At this point I was just winging it, but since Laura was there, and I didn’t want to mess up her bench, I had to play it cool. So much pressure.

Not really. Anyway, we flipped the bench and I cut out all the back braces. I started out cutting them so they would lean back 20˚, expecting that I would have to dial it in with several cuts, but 20˚ was pretty perfect. I bolted the back in with a couple of the lag bolts, then realized we should have started by laying out and cutting the seat pieces. So I unbolted all of the backrest pieces and we proceeded with the seat pieces. After actually doing it, I think the best way to go about it (in the future) would be to start with the longest piece that is flush with the middle front section. Once you have that, evenly space the rest off of that one. We worked our way through the pieces by placing, spacing, marking, cutting, and repeating. After all the pieces were cut, we bolted the back pieces back on, then screwed all of the seat pieces on (of course you can take the faster, smarter route and just fit the seat slats first.) 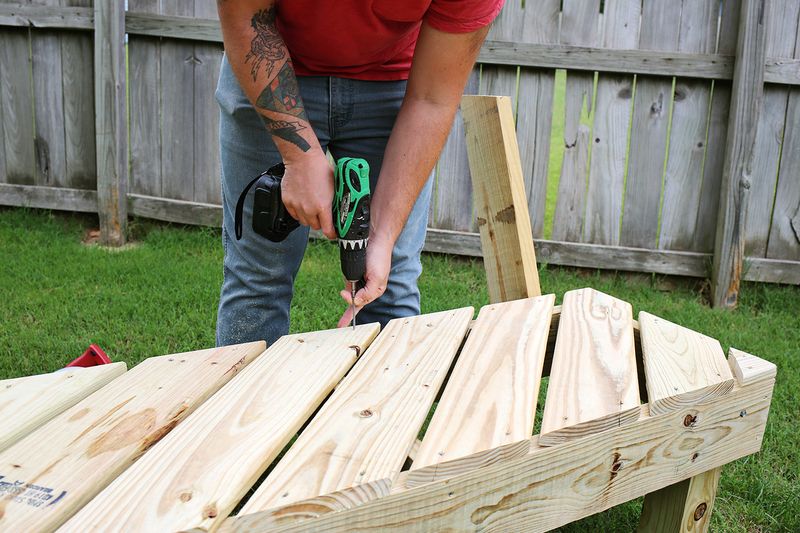 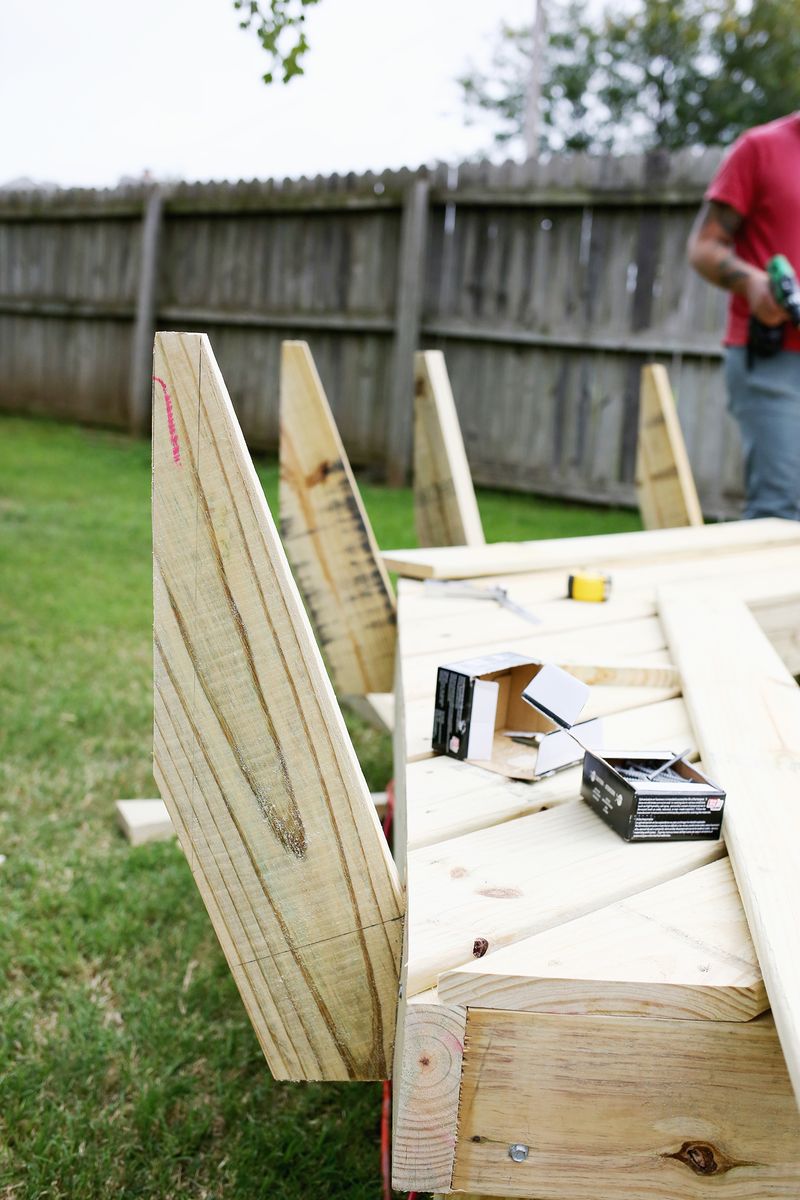 Another last minute tweak: I had cut the back supports with 20˚ angle on top, thinking I was going to put a little ledge on top. Laura wanted a more streamlined and clean look, so I cut down the back of each one, leaving an inch on top. It does look good, but you can skip this step and screw some 2 by 6s (measure and cut to length) on top for a bit of a ledge to lean on or to place your drink on. 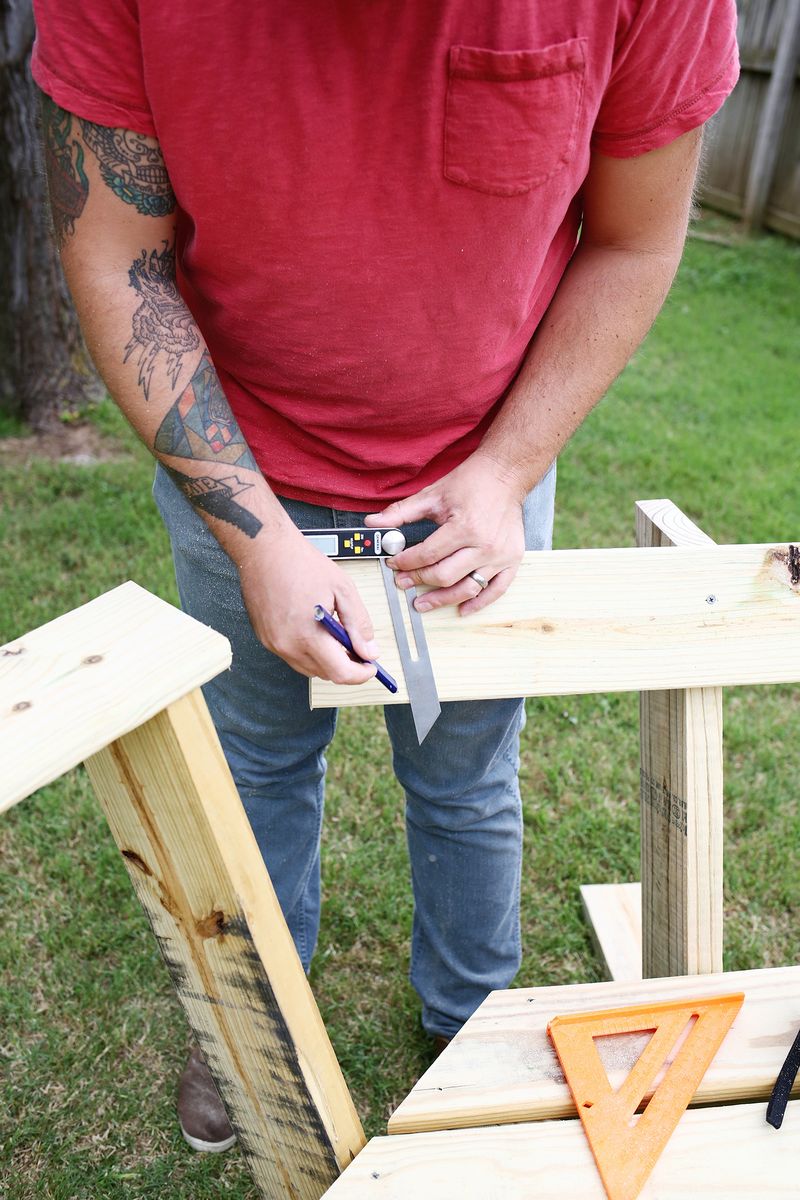 In order to match up the angles on the back support pieces, we did a bit of improvising (sense a theme here?). We started with the top pieces: Laura held the piece for one side and I held one for the other, then marked where they met up. I cut the ends at 20˚only because the back braces were cut at 20˚, and that worked! After we got the top row screwed in, we debated putting the second row spaced like the seating or in the middle. Middle placement won, and it looks great. It always helps to have help on a project like this so you can bounce ideas off each other, and a helping hand is invaluable. 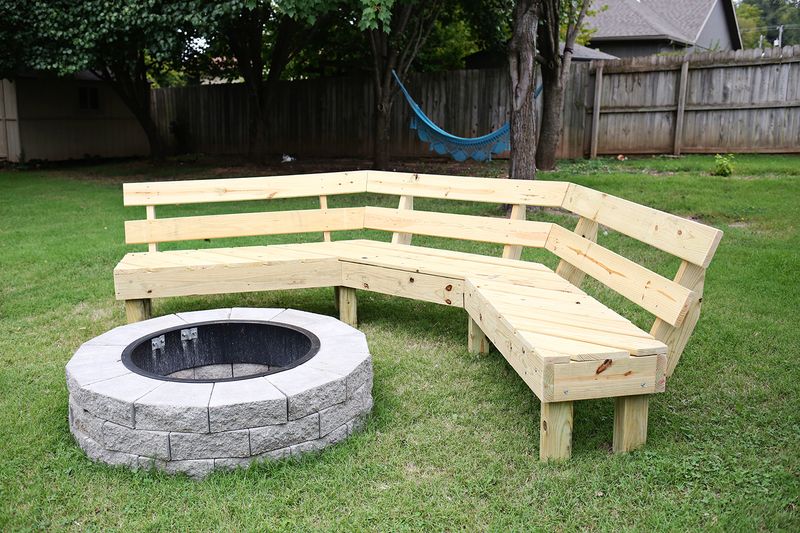 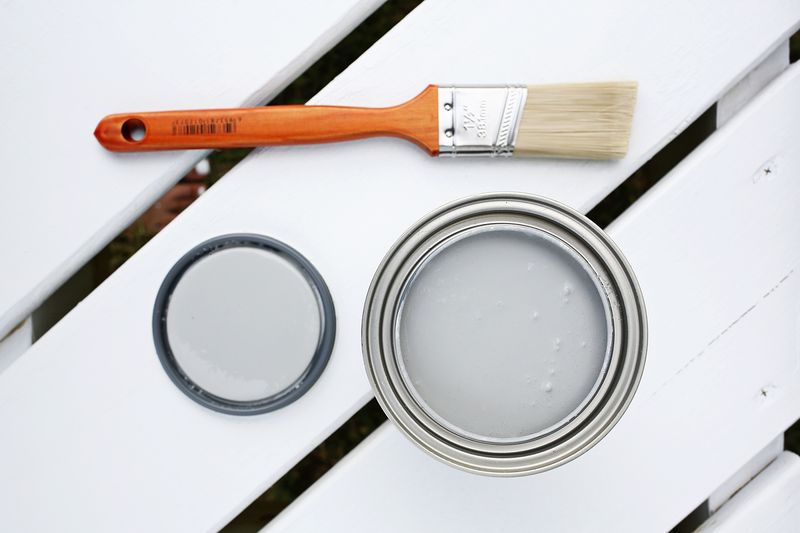 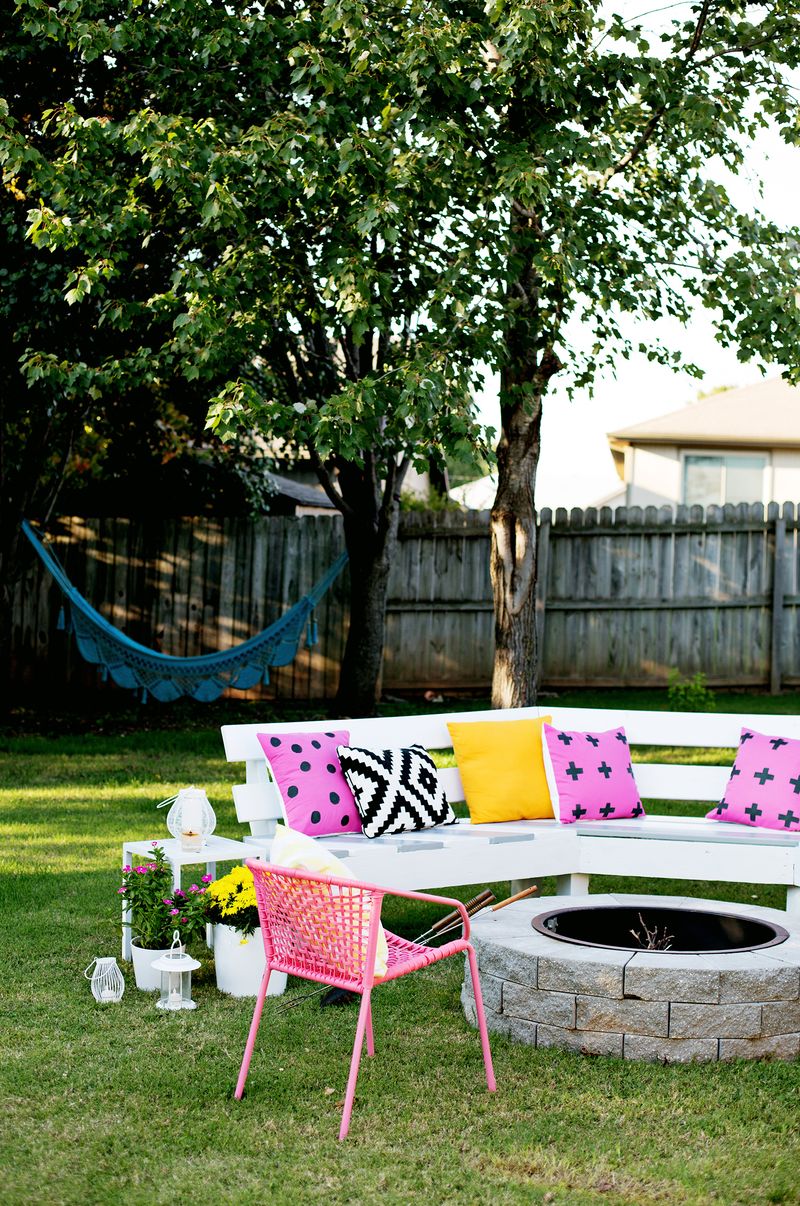 Laura and Todd painted the bench a couple days later, and after adding some cool outdoor chairs and pillows it looks great (although every fire pit needs one of these!). I feel pretty good about how it all turned out. When Todd sat on it, he said, “Now this is a bench.” The Todd mark of approval… what more could I ask for? We’ve got plenty of DIY wood projects here at the blog so take a look and see what else you want to build!- Josh

P.S. Check out more outdoor home decor on our wishlist and shopping pages! 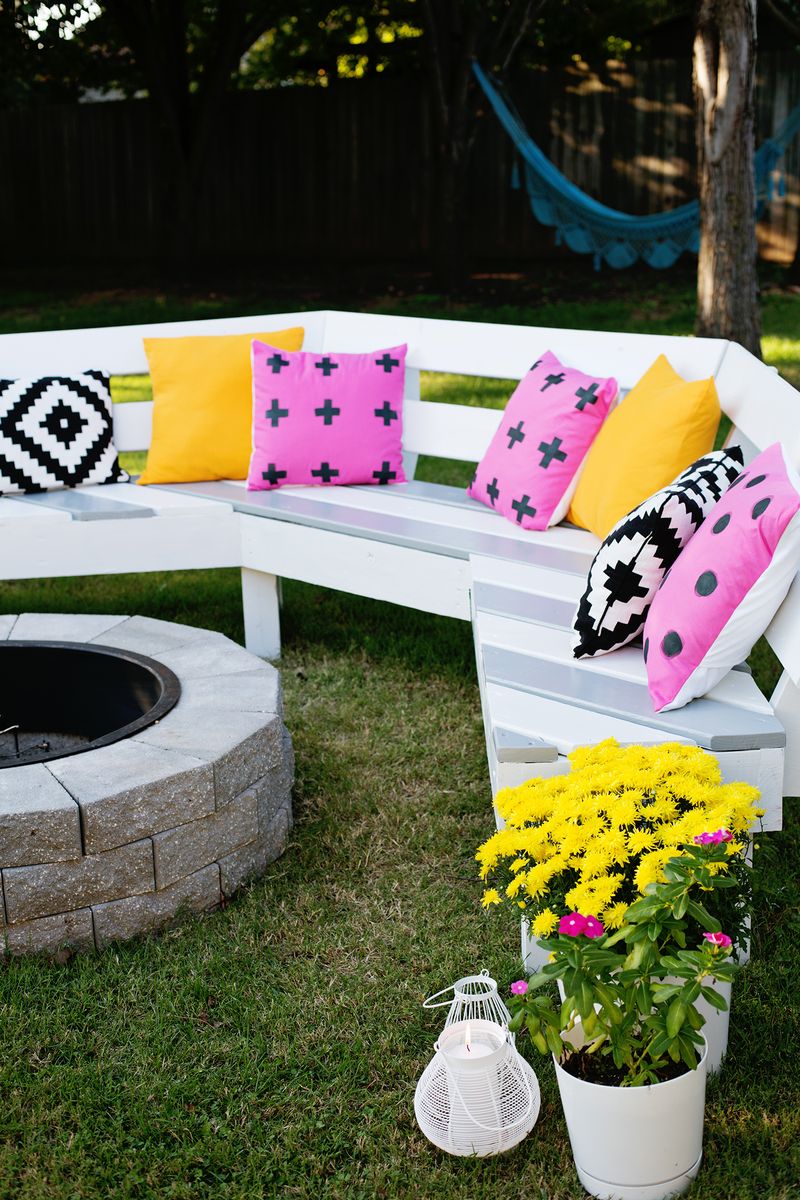 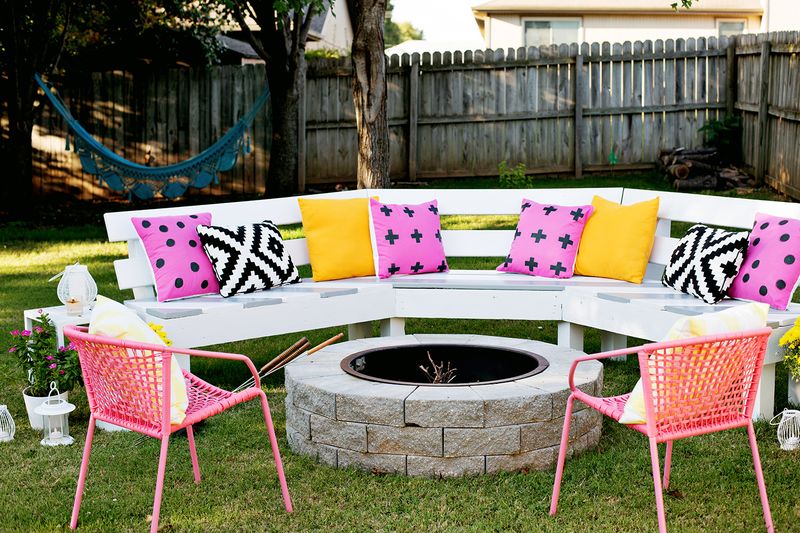 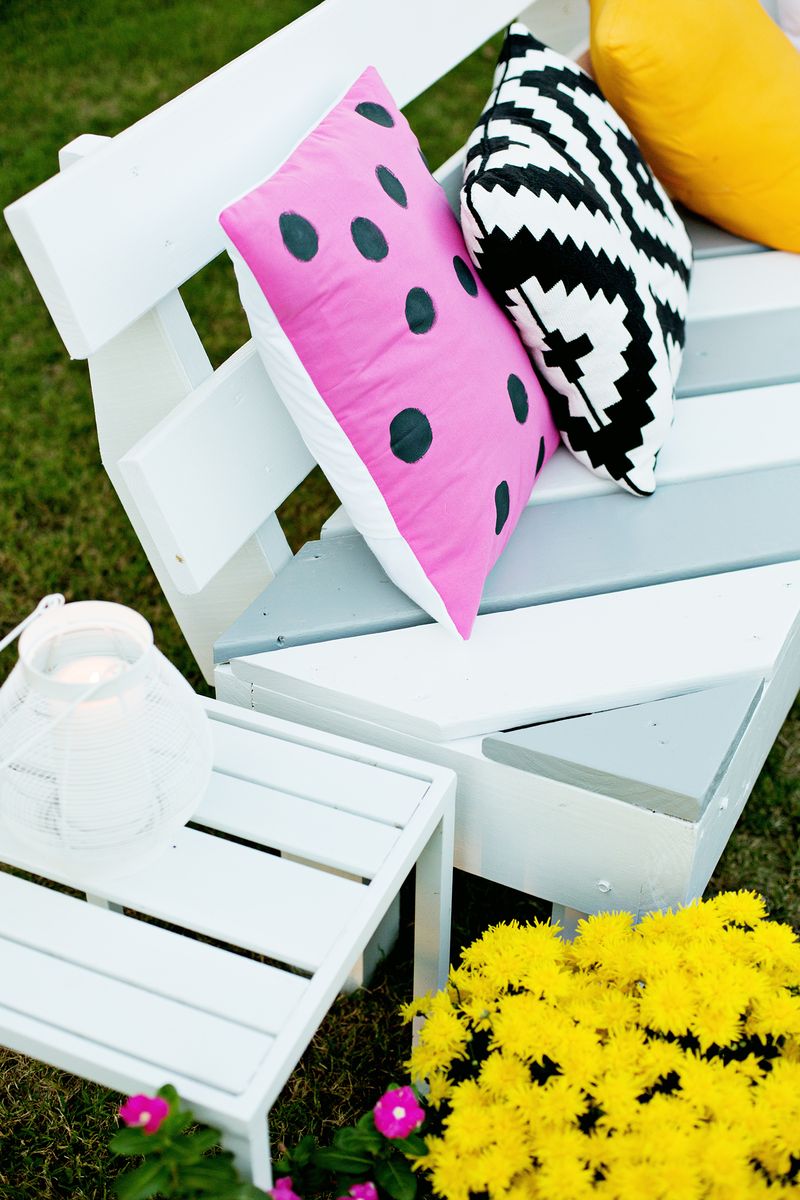 Update:  Josh does’t have the exact measurements for this post, but here are some tips:

-The bench is half of a hexagon, so all of the miter cuts to achieve the curvature are 30º.
-The slats on top of the bench don’t have to be measured exactly—just rough cut them to approximate size, lay them down, and then cut them flush all at once with a circular saw.
-Be sure to assemble the slats on before going for the back rest.
Pin0Facebook0Tweet0Email0
Hexagon Sandbox DIY (With Built-In Benches!)
Hexagon Sandbox DIY (With Built-In Benches!)
Cornhole Yard Game DIY
Cornhole Yard Game DIY
Lemonade Stand DIY
Lemonade Stand DIY