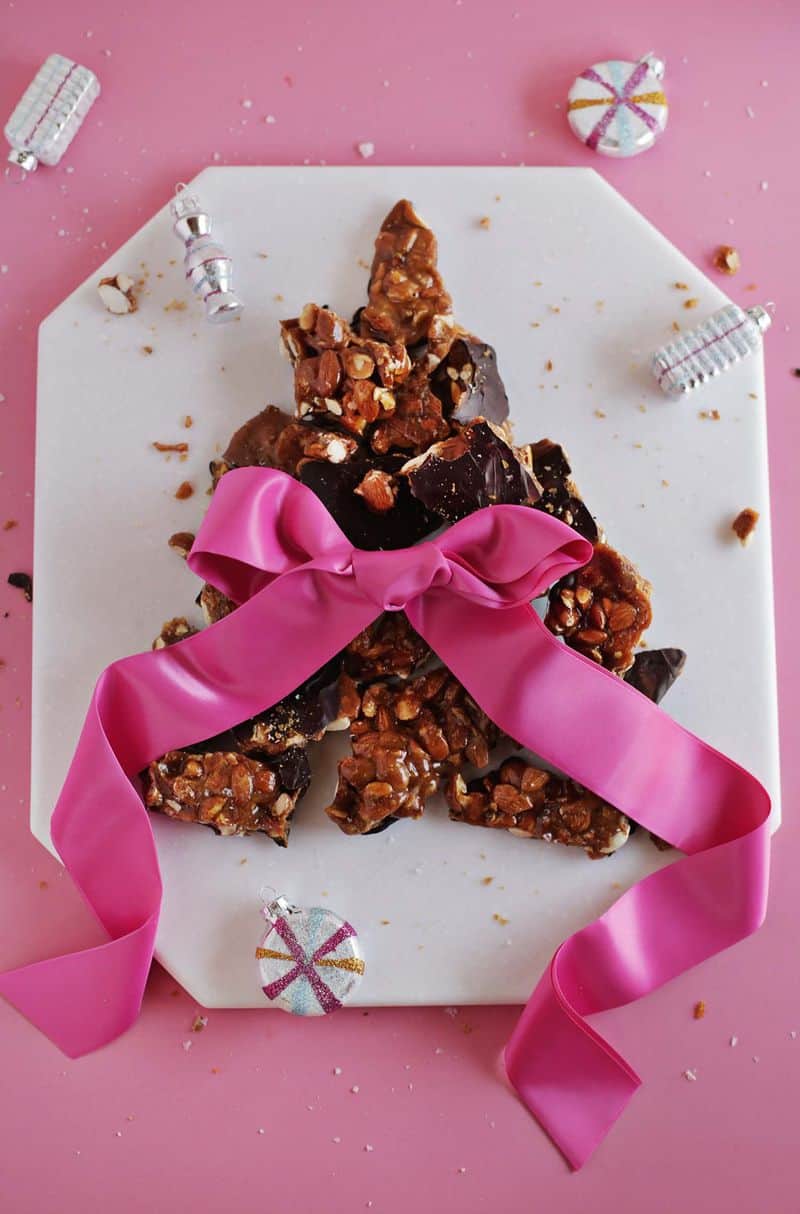 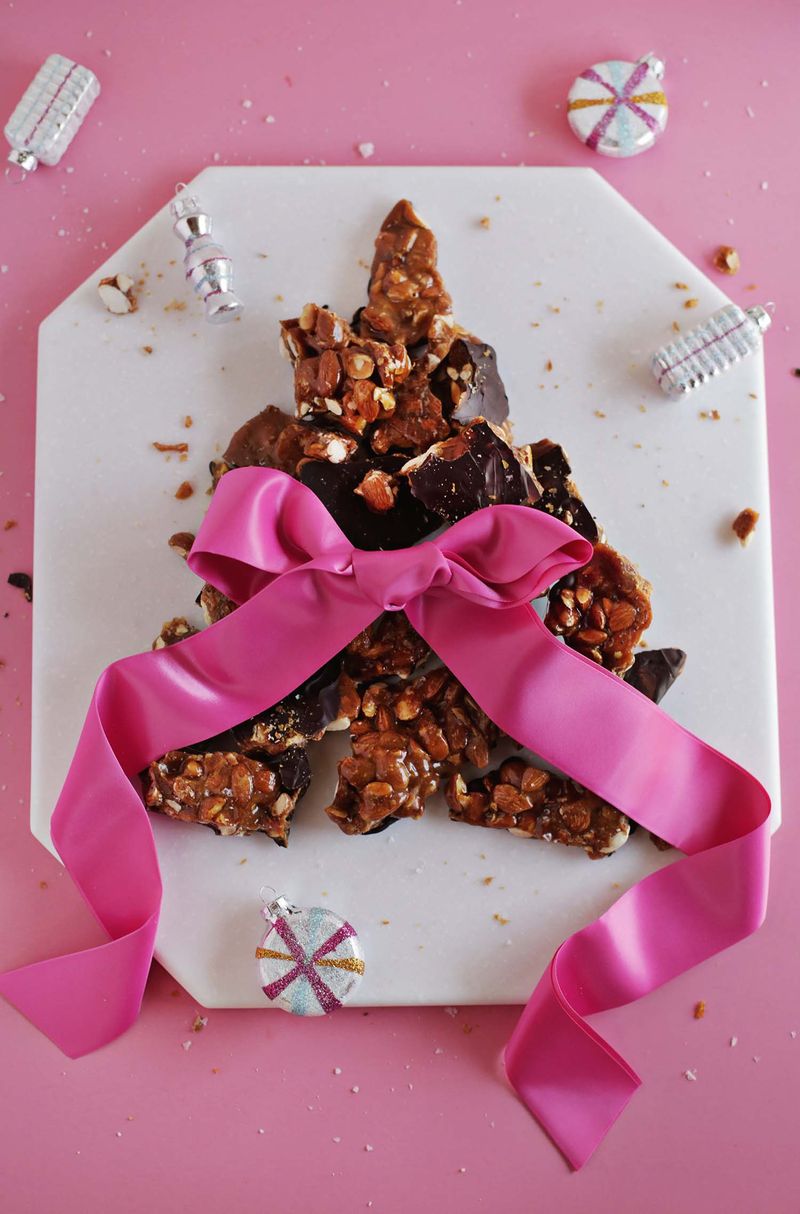 Peanut brittle is probably one of my all time favorite homemade candies to make. There are two main reasons for this. First, I don’t make peanut brittle often, but when I do, it’s usually around the holidays. And I LOVE the holidays.

The second reason is because peanut brittle is extremely easy to make. The hardest part is owning a candy thermometer. Which is not hard at all since they typically cost $10 or less and can be used to make homemade candies, caramel, marshmallows, and even make deep frying (donuts!) easier.

But of course, this isn’t actually peanut brittle. This is a simple twist on the classic treat as we’ll be using almonds and one other surprising ingredient. 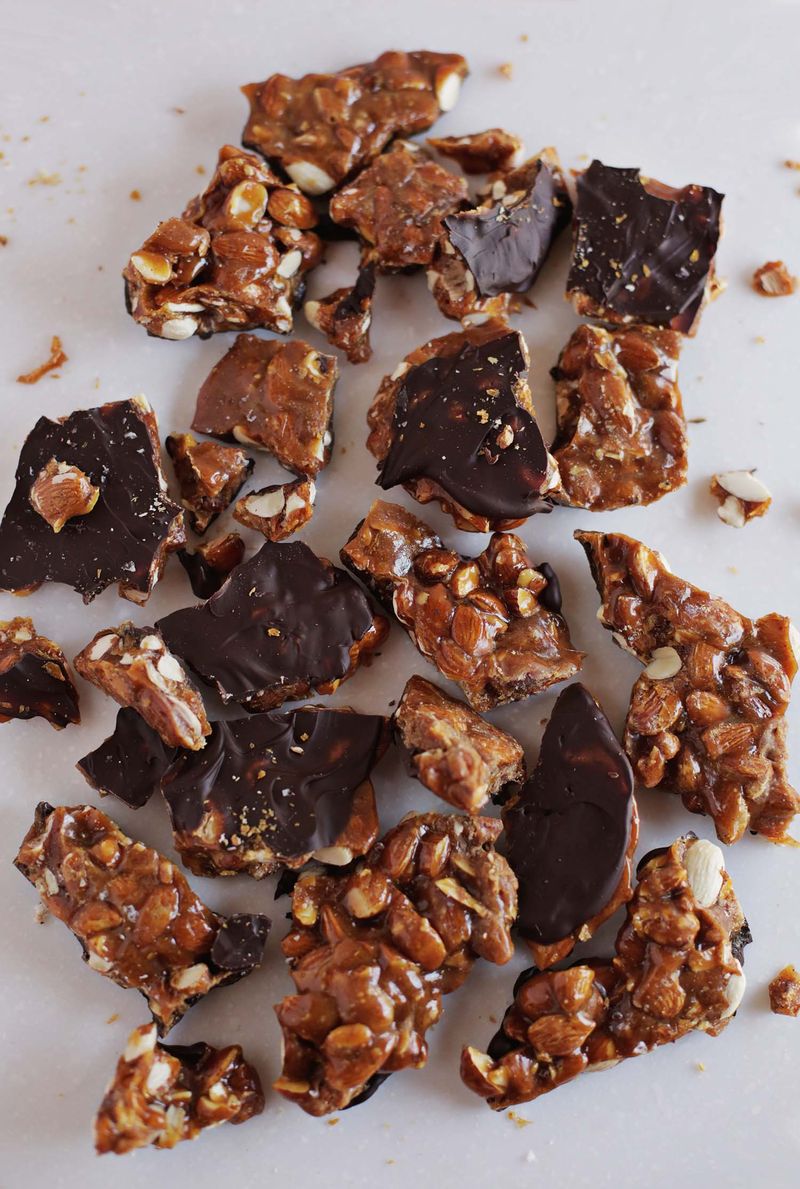 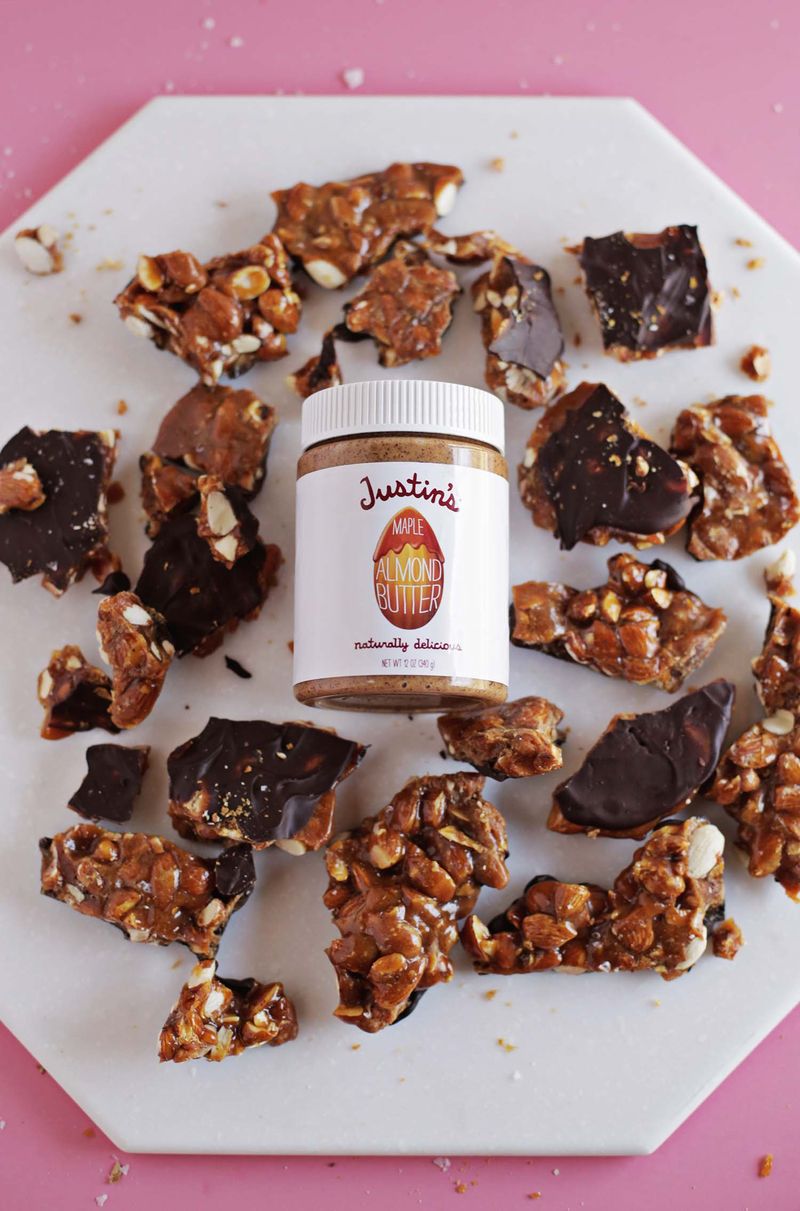 We got to collaborate with Justin’s on this, and I used their (delicious!) Maple Almond Butter in this recipe. I kind of can’t believe I didn’t explore all the Justin’s flavors before because whoa,Maple Almond Butter? It’s every bit as good as it sounds.

Most peanut brittle recipes call for baking soda to be added as one of the last ingredients, causing your mixture to foam up just before pouring. We’ll be using almond butter instead as it has a somewhat similar effect in this recipe, plus it adds even more flavor to a our final candies.

And, if that’s not exciting enough, the whole thing gets a thin coat of dark chocolate and sea salt. Yum! You gotta make this brittle, guys. It’s too good. 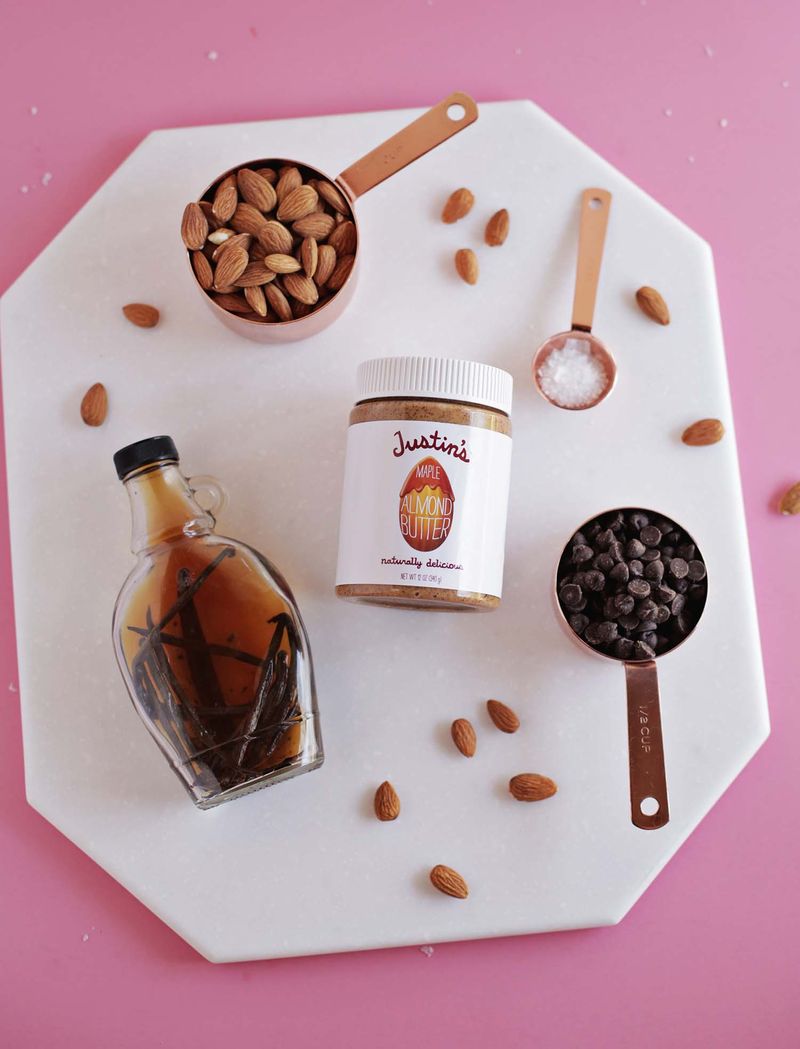 In a large pot, combine the sugar, corn syrup and water. Stir to combine. Bring to a boil and add your candy thermometer. You’ll be looking for your mixture to reach 280°F to 290°F.

This will likely take between 5-6 minutes depending on how hot your stove top is. Keep a close eye on it after a few minutes of boiling so you don’t overheat the mixture. While it’s boiling, you can measure out your other ingredients and give the almonds a rough chop (optional). 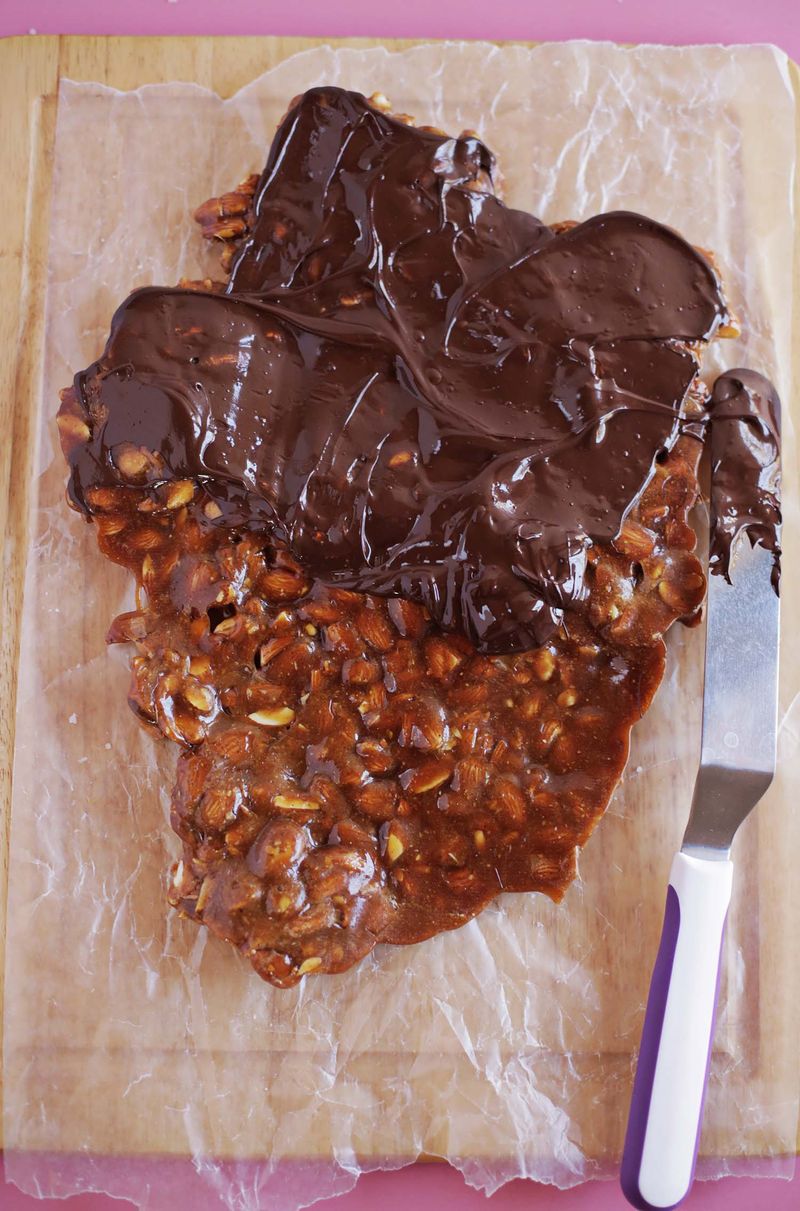 As soon as the mixture has reach our desired temperature, remove from heat. Quickly stir in the vanilla extract and nuts. Then quickly stir in the almond butter. At this stage the mixture may bubble or spit at you a bit, so be careful not to get the hot sugar on your skin as it will stick and burn. No good. Be careful.

As soon as the almond butter has melted into the mix, pour everything out onto a baking sheet lined with a silpat mat or wax paper. If needed, spread the mixture out a bit. While it cools some, melt your chocolate and oil in a microwave safe bowl in 30 second intervals until melted.

Carefully flip the brittle over onto a new sheet of wax paper so the flat side is now facing up. Spread the chocolate over the top, sprinkle with sea salt, and allow to set. 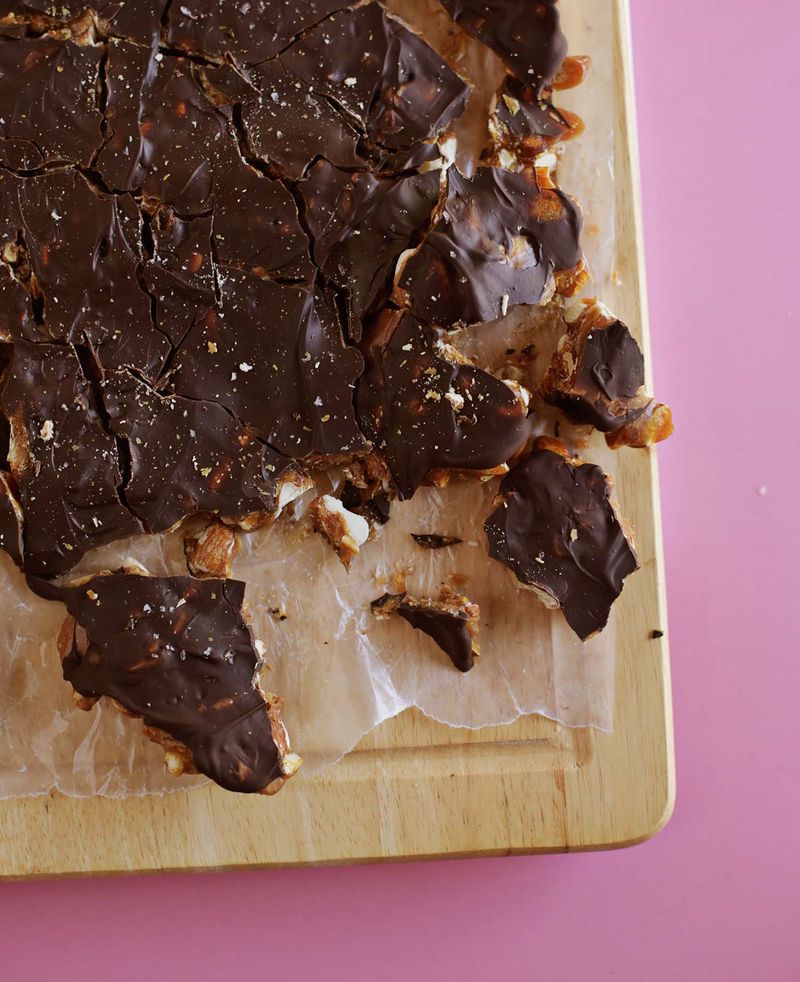 Once the chocolate has hardened, break the brittle into pieces. That’s it! You can store any uneaten brittle in ziplock bags in the refrigerator so the chocolate doesn’t melt. If your house is quite cold, then this may not be necessary. Enjoy! xo. Emma

Mine stuck to the wax paper. What did I do wrong?!

Mmm this looks incredible!! Thanks for sharing this. Beautiful job!!

Yum!! I love almond brittle! I may have to go buy a candy thermometer.

This almond brittle looks so yummy!

Oooooh you are naughty……naughty but nice !!
Thank you for this…I can’t wait to try it…Happy Christmas & thank you for all the yummy recipes….

I am such a Justin’s fan!! The maple almond is the best and this sounds delish!! I also love that they sell individual packets of their nut butters. I always keep a few in my purse to curb any “hanger” episodes when we are out and about or traveling.

I used to snack on peanut brittle as a kid, and I’ve never made it! This looks easy to follow though!

(Have you guys come across Speculoos or biscuit spread? I bet this would go amazing with it!)

That looks so delicious, thanks for sharing!
https://www.makeandmess.com/

This looks incredible, can’t wait to try it out!

This looks so good! http://www.hannamarielei.com

That looks so amazing and delicious, I’ll have to try it. And your photos are perfect as always 🙂

That looks so good! I can not wait to try and make some!

I just ate the cheap version from this 🙁 Looks delicious!!

Check out my latest post about Alessandro Michele’s nerdy style, the trend that is bringing great earnings to Gucci.
www.mgluxurynews.com/posts

Justin’s is the best so this must be yummy!